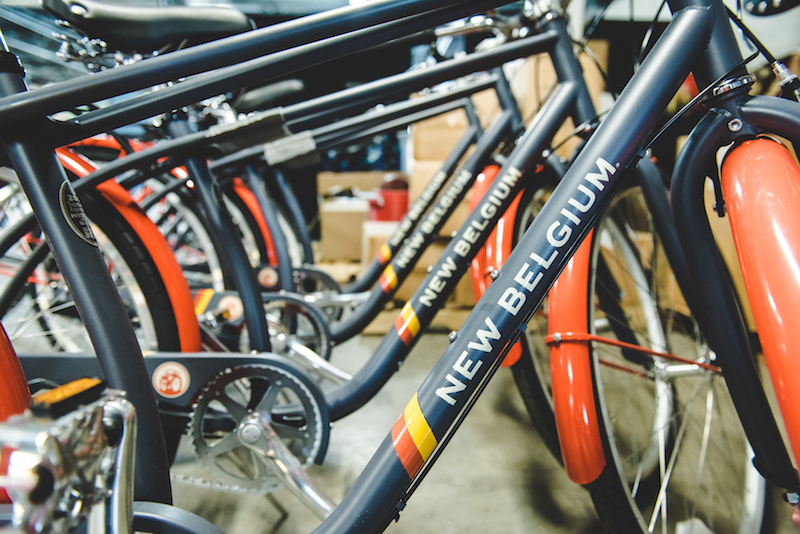 Probably one of the best marketing campaigns in our industry wasn’t even from a company in our industry. When New Belgium came out with Fat Tire Amber Ale prior to the craft beer boom and put a bike on the bottle’s label, it immediately became the unofficial beer of cycling. Even after it had been out for 10 years, each time it started shipping to a new market, it repeated that same tradition. Topping it off, a lot of their “signage” were the actual bikes on the label hanging up in bars and other places that sold their beer. And these weren’t just cheap promotional bikes… they were made by the likes of Felt, Schwinn & Electra.

Check out New Belgium Brewery’s 25th anniversary bikes that are made right here in the USA by Detroit Bikes, plus a great video explaining how the 2 year old outfit aims to produce the largest volume of made in the USA bikes in decades… 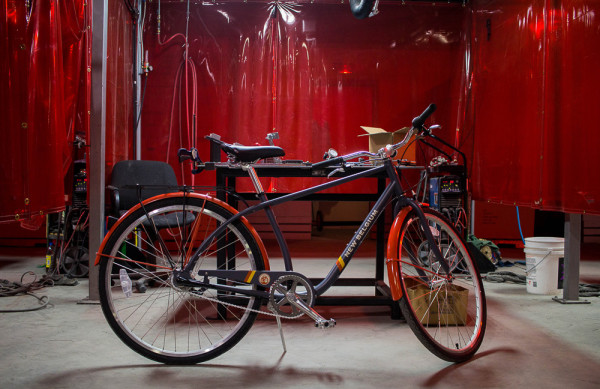 Not only are the bike’s great looking and made in the states, but they step away from the “vintage” hot rod (dare I say “fat tire”) look and into a much more functional design… you know, say if you were going to actually use them for something like riding around. 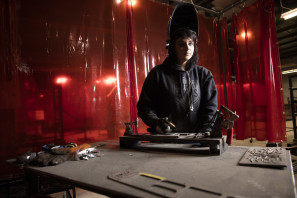 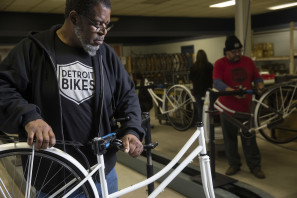 The best part about all of this… Detroit Bikes, based in the motor city of which is riddled with unemployment & closed factories, took advantage of the available space and skilled workers in need of employment to manufacture their bikes. Now as North America’s largest bicycle producer, Detroit Bikes has doubled their workforce from 20 to 40 because of the big bike order from New Belgium. Detroit Bikes will produce about 2,500 “cruiser” bikes during this first year partnership. And so far, about 1,000 bikes have been released with around 40 bikes going out the door each day.

Are these bikes for sale? If so how much do they cost? They look awesome!

No, they don’t sell them. New Belgium gives them away as promotional items…they sometimes auction them with the proceeds going to charity…basically you have to win one.

It’s sad that building 2500 bikes a year makes you the largest bicycle producer in North America. Such a huge decline from the days when Schwinn and Trek were creaking bikes out in the US.

I thought Trek still builds hand made frames in Waterloo. And doesn’t Foes or Independent make more than 2500 a year?

Yes, Trek does still make their high-end Madone, Domane, Emonda and Session carbon bikes in Waterloo, WI. Tens of thousands of them, well more than the bike shown above. Just no steel/alloy…

Everyone always forgets that Trek still makes bikes here, the only major bike company to do so. Partially their fault for not getting the message out…

Sure, but only the crazy high end ones. I seriously doubt that even 1% of their total bikes sold in a year are made in the US.

That might be true, but that’s not the point. They make between 20,000 and 25,000 frames in the USA every year, the only major cycling brand to even try.

They do it because they WANT to. Believe me, it would be much easier to ship the rest of them overseas for half the cost.

Give credit where credit is due. Trek is still family owned, not owned by Asia manufacturers and huge conglomerates like the rest of the bike industry…

I’m pretty dang proud of Trek for holding out and still making some of their frames here. It’s pretty cool, especially because they’re still privately held.

I own on of these 25th anniversary bikes and want to SELL it!! BRAND NEW/NEVER BEEN USED and it includes the stand/rack as well. **Kansas City – local pick-ups ONLY**

Is it still for sale?

I have one for sale. Just received it. Still in the boz.

Do still have the 25th anniversary bike for sale?