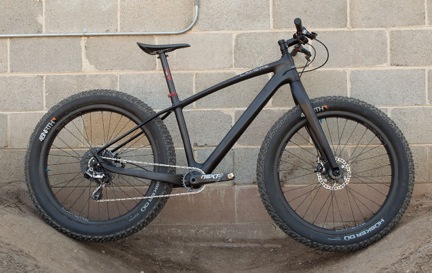 Considering the rapid increase in everything carbon when it comes to fat bikes, it was only a matter of time before someone took a stab at taking the title of the “lightest fat bike.” That of course sounds like a job for Fair Wheel Bikes, the mad mechanics behind projects like their insane 6 lb road bike. As you might imagine, even the lightest fat bike will still be quite a bit heavier considering the tires alone come to nearly 6 pounds. That didn’t stop Fair Wheel from creating an impressively light fat bike though – one that’s lighter than most mountain bikes.

What did the custom built Lamere Fat bike weigh? Find out next… 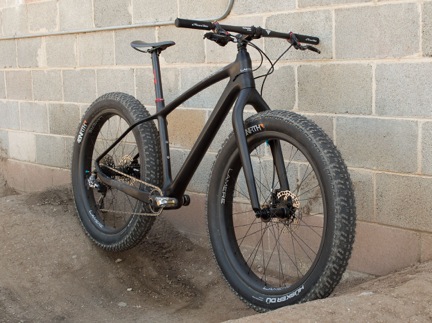 Starting with a Lamere carbon fat bike frame and fork, Fair Wheel chiseled out a fat bike that comes in well under 20 pounds. Completely built the bike weighs in at an incredible 18.88lbs (8563g). Officially that number doesn’t include pedals, so Fair Wheel gives us the weight of 19.21lbs (8715g) with Bebop Titanium pedals.

Yes, that is a completely rideable fat bike under 20 pounds. Specifically, a fat bike with 4 inch tires on a frame with a 170mm spaced rear end with QR axles front and rear. As for the title of the lightest fat bike, this is definitely the lightest we’ve seen. 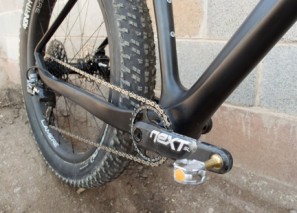 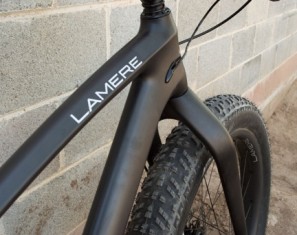 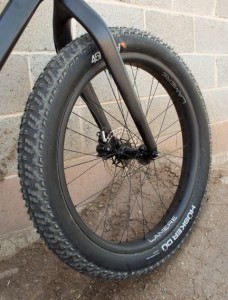 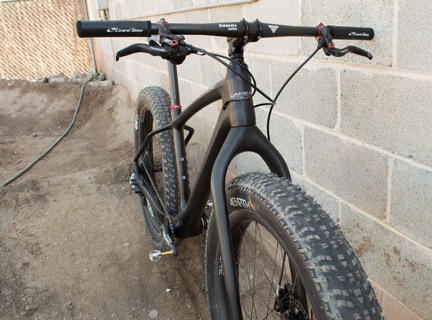 As with most of Fair Wheel’s builds, the custom bike cuts the fat at the expense of many dollars. Nearly $9000 of them in this case. But that does buy you some bragging rights (for now?) and one hell of a light fat bike.

As an added bonus, Ben Welnak from Mountain Bike Radio just sent over his interview with LaMere Bike’s founder JP LaMere.  Around the 16 minute mark, Ben discusses the build above with JP. Check out more MBR episodes here.

a light weight fat bike? Somebody needs a new hobby…

Why spec an X01 cassette instead of going full XX1? Coulda saved some grams there.

Stopped reading after seeing the RaceFace stuff…hell even my mtb crank is lighter that theirs.

Can’t be bothered reading the rest.

Yet continued on to post how disinterested you are.

Yeah the Next cranks are real boat anchors :/

No cutouts in the rims???? Cut out that heavy carbon!

JMS – what crank do you have that is lighter? I have that exact Race Face crank and it is lighter then my XX1 crank and Hollowgram crank. Also it is stiffer then both of those, best crank I have ever owned. Guess trolls will be trolls.

must have a run bike….those have some seriously light cranks!

No suspension fork? easy to go light this way…

More shots of the pumptrack please.

@bart….HHHHAAAHHHAA! +1 positive rep for you

Do you guys even like bikes? Why bother commenting. These dudes are getting rad and they’re not even one of the big companies with hundreds of lawyers on retainer. Go Fairwheel!

@JMS…that race face crank next is one of, if not THE lightest on the market. Passing on their kit is your loss…they make some great bomber components…

JMS must be time traveling from the 90’s and not realize that RF is making premier components these days. He should do all a favor and get “Back to the Past”.

And all the other haters can need to leave these topics alone when they don’t care about or understand what the rest of us are enjoying. It’s their loss.

GetRad, not a lot of photos yet, just a tease of that curvy hip…

Haha, vectorbug, you nailed it.

It’s a fatbike! I don’t know if there’s a lighter wide-BB XX-1 compatible cranks other than Race Face. If there is, it would be just a few grams lighter.

@Rivet
Thanks for the info. You’re so helpful.

What would life be without helpful comments like yours?

Awesome. But I would rather add a pound and get rid of fragile euro-weenie bits.

@skyfire1202 There are many options out there, the system weight of RF cranks is damn light when you include BB.

@JMS Please, regale us with your light crankset.

@JMS: for a fatbike, you need specific cranksets (100mm BB), maybe your crankset is lighter, but maybe it does not fit to a fatbike.

@Brian: The X01 cassette actually weighs a few grams less than the XX1 one and the black finish is better suited to the rest of the build.

It’s like Hammacher Schlemmer and SkyMall made a bike shop for the Sultan of Brunei and his brother.

You could easily make the bike significantly lighter with hed wheels and a salsa frame. Not even close to being “the worlds lightest” Its still at least .3 pounds away from it

Hed rims and new Schwalbe tires would shave at least a pound and a half!

My 6.5kg hardtail with disc brakes and bottle cage has Raceface Next cranks . They are very light . I think you need to apologise or retract your statement .