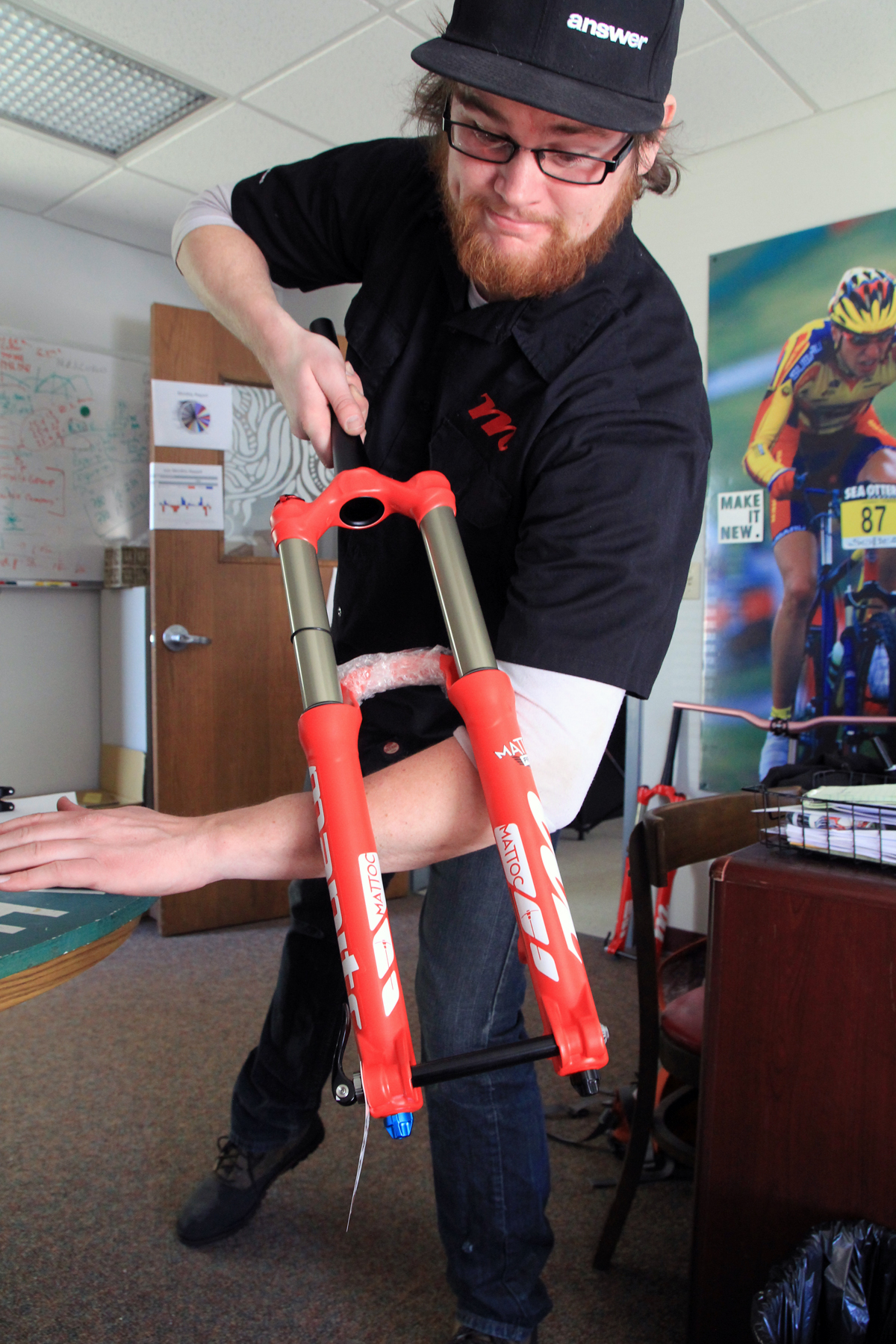 One of the benefits of being on hand to check out a brand’s headquarters is the chance of catching a new product just as it lands. That was the case with the all new Manitou Mattoc. First shown back at Eurobike, the very first production samples of the Mattoc suspension fork showed up at Haye’s Milwaukee facility leading up to Frostbike. The fork has been a long time in the making, but as the Hayes Bicycle VP Darren Campbell put it, it was something they had to get right. If it rides as good as it looks, it appears they have succeeded.

Details plus actual weights after the jump. 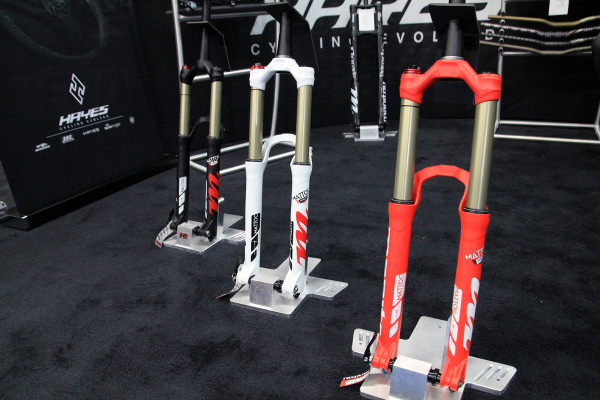 While the first version of the fork we saw was a hand painted prototype, these are the real deal with three pro models shown here in red, white, and black. The fork will also be offered in an Expert and Comp models with the main difference being the Pro model has a lighter cartridge rebound damper and the Comp gets lower end MARS air and TPC damping. Mattocs will be sold as 26″ forks in 140/150/160 and 170mm travel, and 27.5″ in 140/150/160. 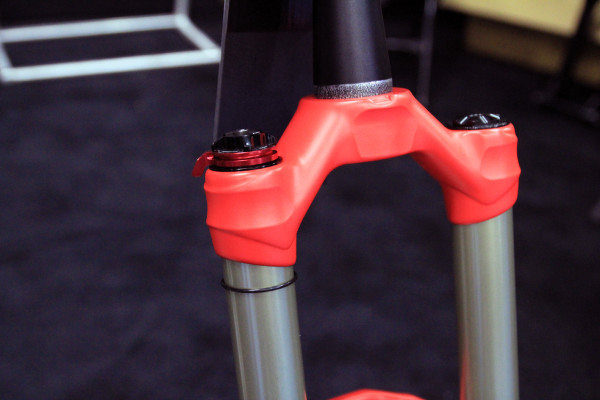 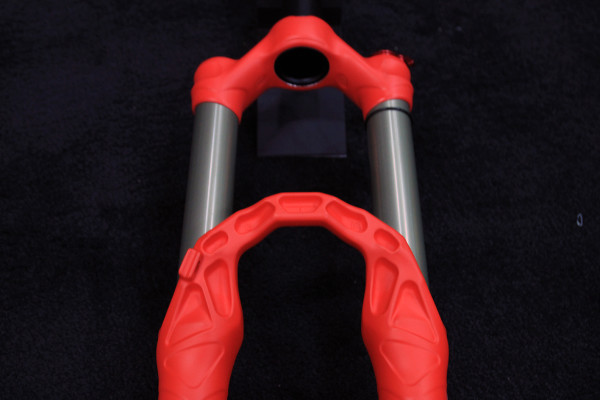 The Mattoc keeps things light and strong with Manitou’s classic hollow crown and reverse arch lowers. The chassis is based on 34mm stanchions. 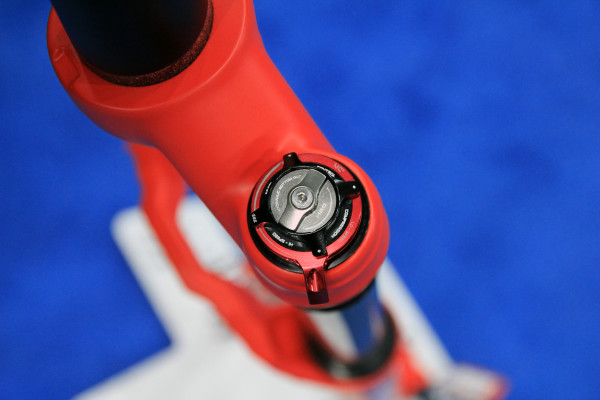 Damping is controlled through the new MC2 damper which offers high speed and low speed compression while also allowing for the adjustment of the hydraulic bottom out resistance with the gold knob on top. The MC2 uses a closed cell foam cylinder on the compression piston which takes the place of competitor’s bladder based dampers which Manitou says creates a more user serviceable fork. 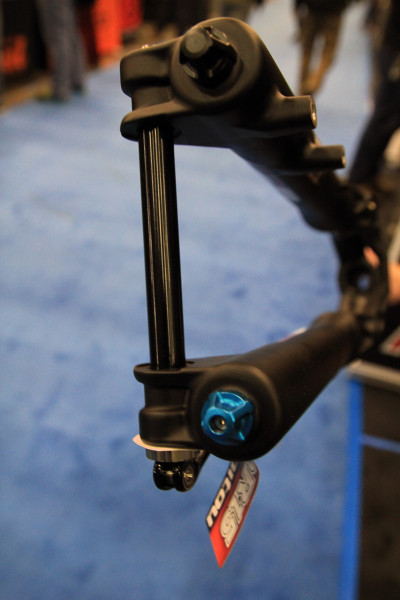 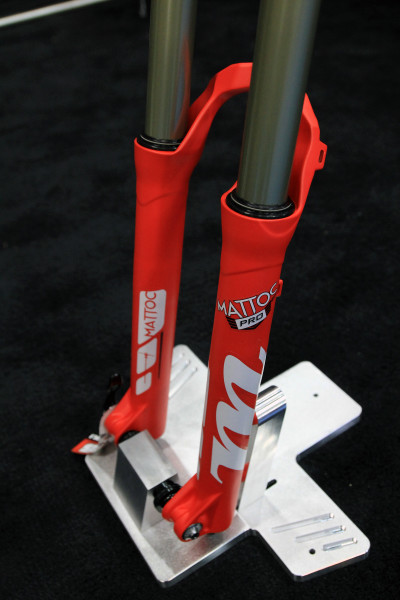 Built with a dual chamber air spring borrowed from the Dorado, the air valve is located on the bottom of the fork and inflates the positive and negative air to the same pressure. Compared to the prototype the knobs on the bottom of the fork look quite a bit less susceptible to damage on the trail thanks to the rounded design. The 180 PM brake mount will allow for 180-203mm rotors. 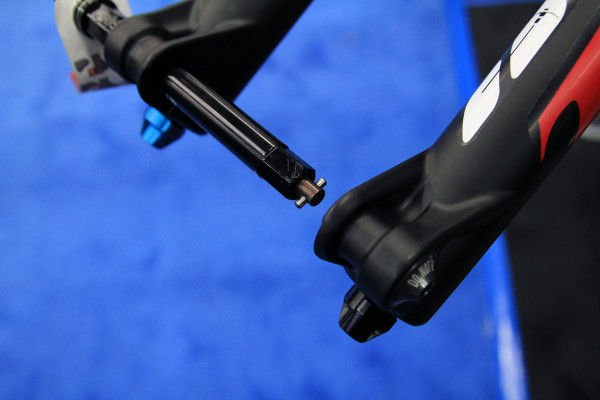 The Mattoc is finished off with one of the slickest quick release 15mm thru axles around. Instead of having to thread the axle into place, the steel t-bar uses just a 90 degree turn to engage the axle. Then close the lever like any other system. 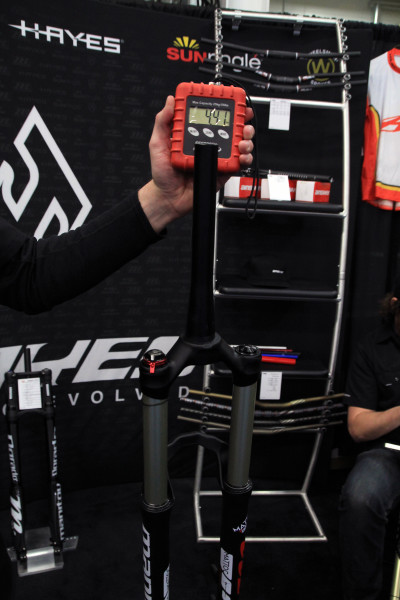 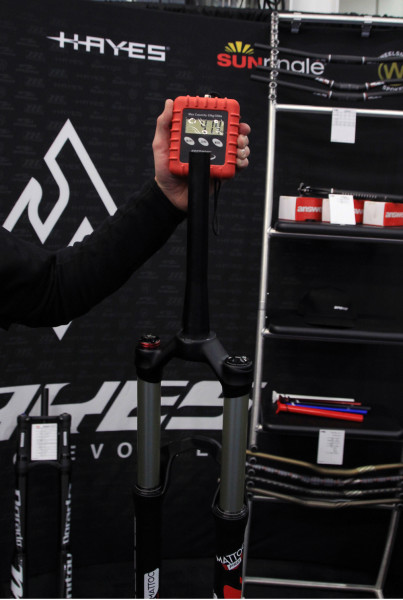 On the scale, the Expert checked in at 4.41lb (2000g) and the Pro at 4.14lb (1878g), both were weighed with full steerers and the axles installed. We’re waiting for final word on pricing and availability and will update as soon as we get it.

Looks promising, but being an industrial designer I threw up in my mouth looking at that rough surfacing!

i thought exactly the same!
so it shouldnt be the baddest idea

I would maybe think about buying a Manitou fork, if it wasn’t for the fact that replacement parts from Rock Shox and Fox are easily available and consistent through the years.

Not only that Manitou parts are non existent in any of the on-line shops I buy studd in, but they change models every year. For example, think about buying todya replacement parts for a 2008 Manitou, LOL!!!!!

@MaLoL Manitou has an amazing warranty department that will find any part for you if you need it. Try contacting them directly when you need something instead of checking your “on-line shops”

Malol, you say that yet people seem to be happy to splurge serious money on Bos forks where the after sales is, by repututation, intermittent at best.

Hye Jon MacKinnon, the axle system is the QR15 Hexlock. We first introduced it in 2011 on the Manitou Marvel fork.

have they figured out a way to lower the A-C heights yet with the backwards arch? They tend to be an inch taller then other manufacture forks so the arch doesn’t slam into your downtube on full compression.
Just give up on the reverse arch already…..

I like that the front of the arch has integrated mud pockets.

@Alex: Even better: that’s the back of the fork. You know, right where it will catch the most mud from wheel spray.

Hexloc axle has been out for-ev-er. I have the hexloc QR on my Tower Pro. It is easily the best thru axle out there. I have the Suntour 2nd collet and the new Maxle lite on my Pike. Manitou isn’t flashy (other than the hot ember colored forks) but their stuff just works well. I am excited to put a Mattoc on a new Canfield Balance. Yeah baby!

Manitou MTB: no 29er version? With the ever increasing number of mid-long travel 29ers out there, I’d think it would common place to add one to your line.

Chris, agreed, and make it 29+ compatible.

Love the comments about the arch having holes to catch mud on the back… have you guys even looked at the back of your normal arches?
Still won’t buy these, i’ve been around bikes since the end of the 80’s and have yet to see a set of Manitous that remained working for anything like an acceptable amount of time.

I have been running a set of Manitou Nixons from 2007 and have not found a fork to match them. With 20mm axles, with just 32mm stanchions, are stiff as can be. I tried some of the Fox products and came away disappointed. If the Mattoc is an improvement over the Nixon, count me in!

I have been running a set of Manitou Nixons from 2007 and have not found a fork to match them. With 20mm axles, and just 32mm stanchions, they are stiff as can be. I tried some of the Fox products and came away disappointed. If the Mattoc is an improvement over the Nixon, count me in!

@davet – hey just cut a sticker down for the back of the arch…and mud won’t find its way in there, 2 come in every esigrip pack.

@davet – if the mattoc is on par with the redesigned dorado, they’ll have an absolute home run on their hands (if they price it right).

Manitou all Day! Manitou really simplifies things. Need a part? Call them direct vs searching elsewhere. Ease of use.. spot on. Beautiful products, great price point . Better than fox in all aspects. Would you prefer to send your fork back to the factory every 40 hours as fox recommends for a 150$ maintainance/overhaul? Or ride it as is for years with better adjustability and action for riders of all weights.. I switched out my fox crap on 3 bikes with manitou, what a world of difference. Fox on its best day can’t touch manitou on its worst.

Finally someone not sticking to stricty BLACK and WHITE forks. Manitou needs to bring back it’s signature RED paint on it’s top of the line XC forks, too. Oh, and RockShox needs to bring back SID blue. I’ve been racing MTB’s since the early nineties (when mtb’ing was in its hayday) and I’m wondering when these fork companies are going to start bring back the colors that made them famous in the first place.

I ride Tower Pro 140mm – just superb!
I really like higher axle to crown because I like my front-end to be higher
I do not understand that short-travel devices for “ass-higher-than-head” riding style and the front wheel touching the shoe.
The reversed arch do not make any issues, I really can’t undestand about what you all are talking…Works well.

The only thing I understood I need more than 140mm travel. For everything.
Wanted Dorado, were almost on the edge of buying…But damn it weights 1kg more than Tower Pro! Yep, it’s just other level gravity fork, but anyway…So I gived up for a while consider weight and my riding style.(more consider weight 😉 )
But I still want more travel and up to 29″ wheel possibility.