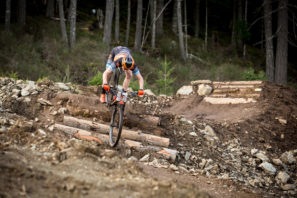 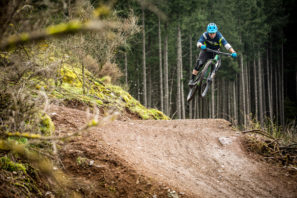 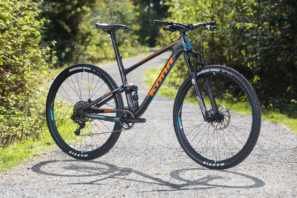 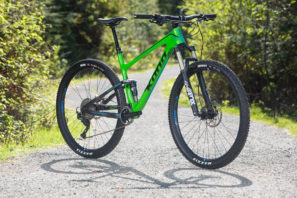 The cat might already be out of the bag after their showing at Sea Otter, but that isn’t stopping Kona from officially introducing the new carbon Hei Heis with a clever video. Typically, double vision on a mountain bike would be a bad thing, but in this case it’s how Kona racer Spencer Paxson attacks completely different rides with the same frame. That’s of course due to the Hei Hei’s duality as both a 100mm travel XC race bike and as a 100/120mm travel trail slayer. With build kits uniquely suited to each task and a light weight carbon frame, the new carbon Hei Hei may leave you seeing double… 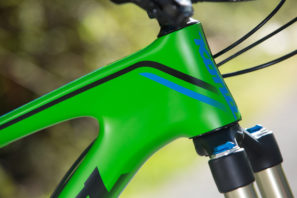 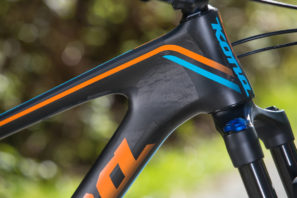 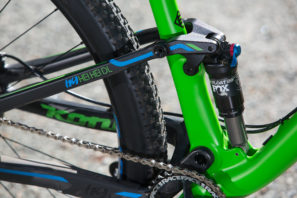 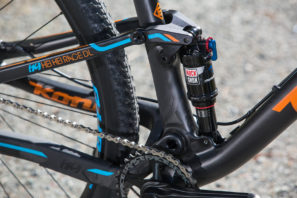 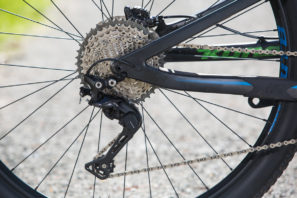 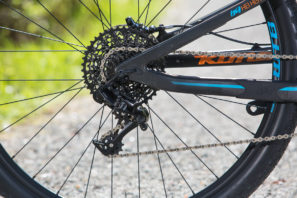 Starting with the same 1800g carbon frame  with Boost spacing, Kona equips the FUSE suspension system with two different shocks even though they see the same 100mm of rear travel. Those shocks also correspond to the suspension fork with the DL seeing a complete set of Fox suspension while the Race DL goes with RockShox. The drivetrains are also a bit different with an XT 1×11 on the DL and a SRAM GX 1×11 on the Race DL. To complete the different specs, the DL is given a dropper post, wider bars, and bigger tires.

While the two bikes share the same frame, the geometry differs slightly due to the introduction of a longer travel fork for the DL. That means a 68º rather than 69º head tube angle, a slightly longer wheel base, and less BB drop on the DL. The result is two very different bikes for two different riders. Or the same rider on different days of the week as illustrated by Spencer Paxson above.

Was the photographer afraid of the forest? Those shots are clearly studio work with the forest and shadow photoshopped in they don’t look natural at all.

Yeah, it’s precise and clean, but so obviously shopped. it really does kind of punch you in the eyeballs a bit.

Is it true the rear can only fit maximum 2.2 tire? I remember reading that somewhere.

I’d be curious as to the answer here as well. I know XC stuff has traditionally been ‘narrow’, but one of the most brilliant XC tires I’ve ridden was the Maxxis Ikon in 2.35–and for those non-racers interested in this bike (I would guess the majority of customers for this brand/bike) are going to want that slightly better 2.35 clearance. Any Kona folks want to weigh in on this?

What does “Independent Suspension” even mean now?

Isn’t a longer fork supposed to slacken the head tube angle, not steepen it?

The geometry charts are positioned with the wrong model specs as far as I can tell.

Isn’t this just another faux-bar bike?