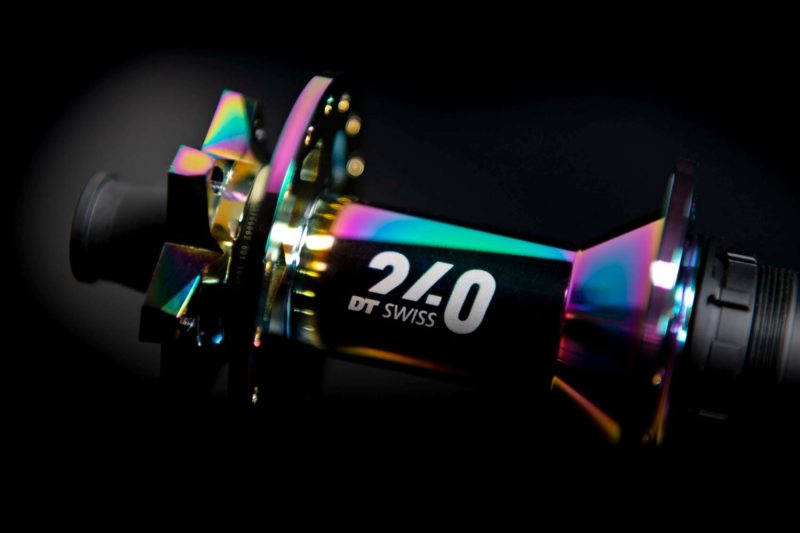 DT Swiss 240 Oil Slick hubs jump on the shiny rainbow bandwagon with a limited edition version of their Classic MTB 240 EXP hubs, ready to be built up by your friendly neighborhood wheelbuilder. Limited both in number of actual hubs and limited options available, DT expects you to seek out a custom builder to lace their latest benchmark Ratchet EXP hubs into a trail or even enduro set of mountain bike wheels… 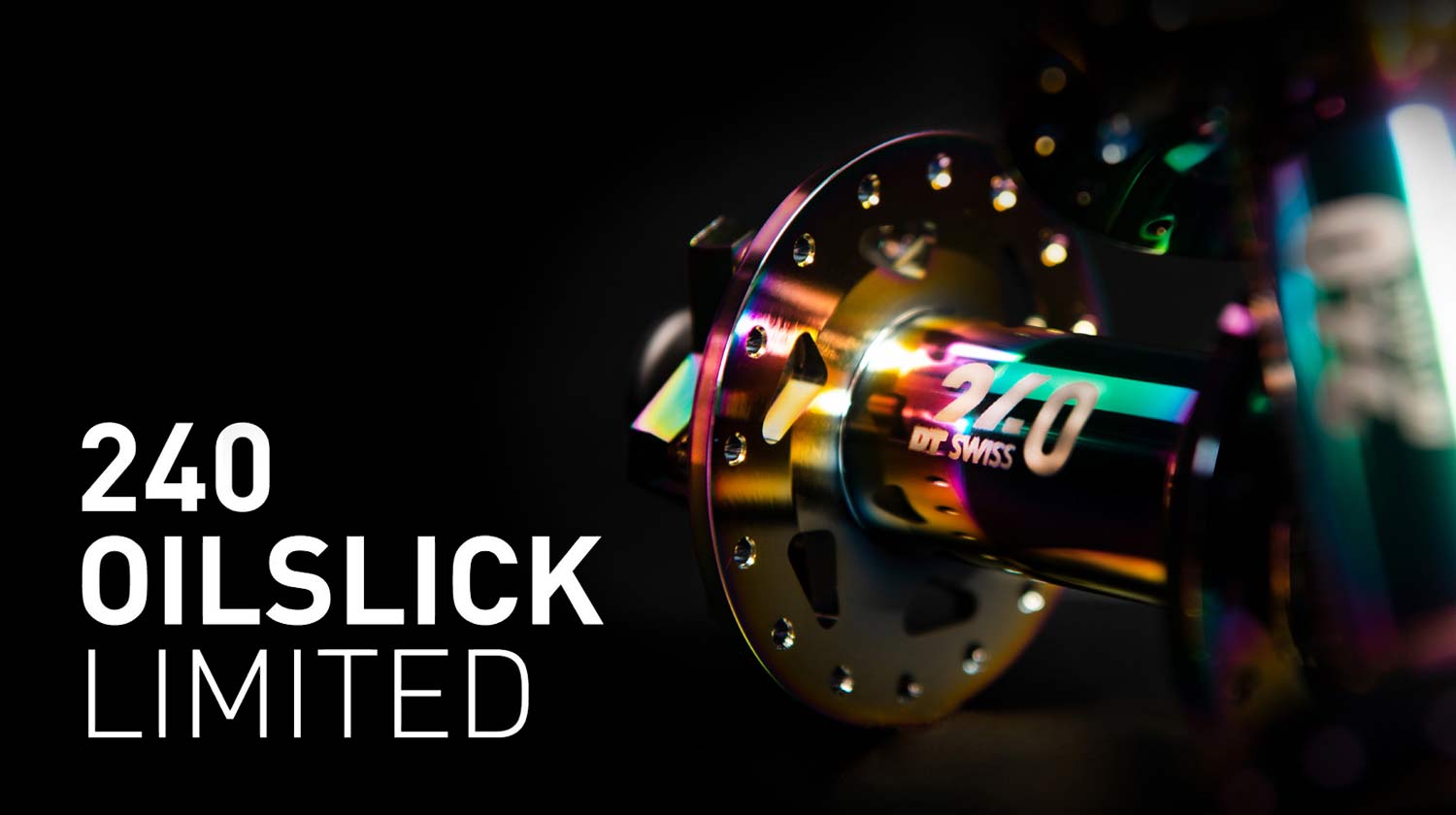 It’s not an entirely new finish for DT Swiss hubs, and to be fair to DT, their first oil slick hubs pre-date at least another twenty-five “oil slick” components we’ve seen in the last year. But the DT Swiss shininess has never been easy to get ahold of.

The straight-pull hubs in those XRC1200 carbon wheels were an OEM-exclusive finish (as were the two matching spokes), and the only way to get them was to buy one of the 32 complete bikes.

Starting last summer, a rare set of those Centerlock, straight-pull hubs would occasionally pop up. I saw a set with Belgian builder Stealth Wheels and another in German custom builder Light-Wolf‘s display cabinet, having already been claimed by a customer. 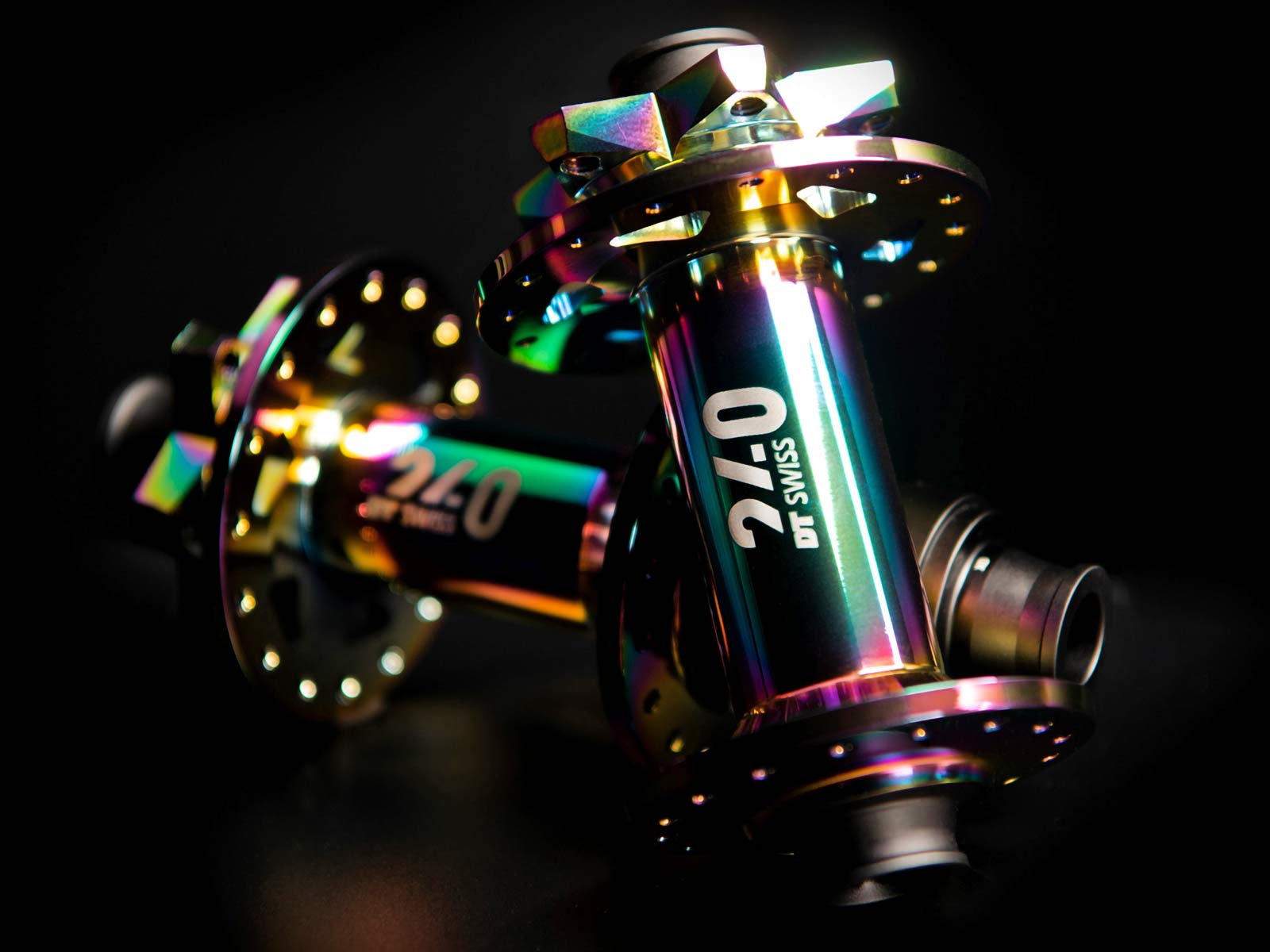 Now it looks like mountain bikers might have a more concrete shot at getting a new set. Globally 1000 individual hubs will be sold, available exclusively through DT Swiss dealers and wheel builders. 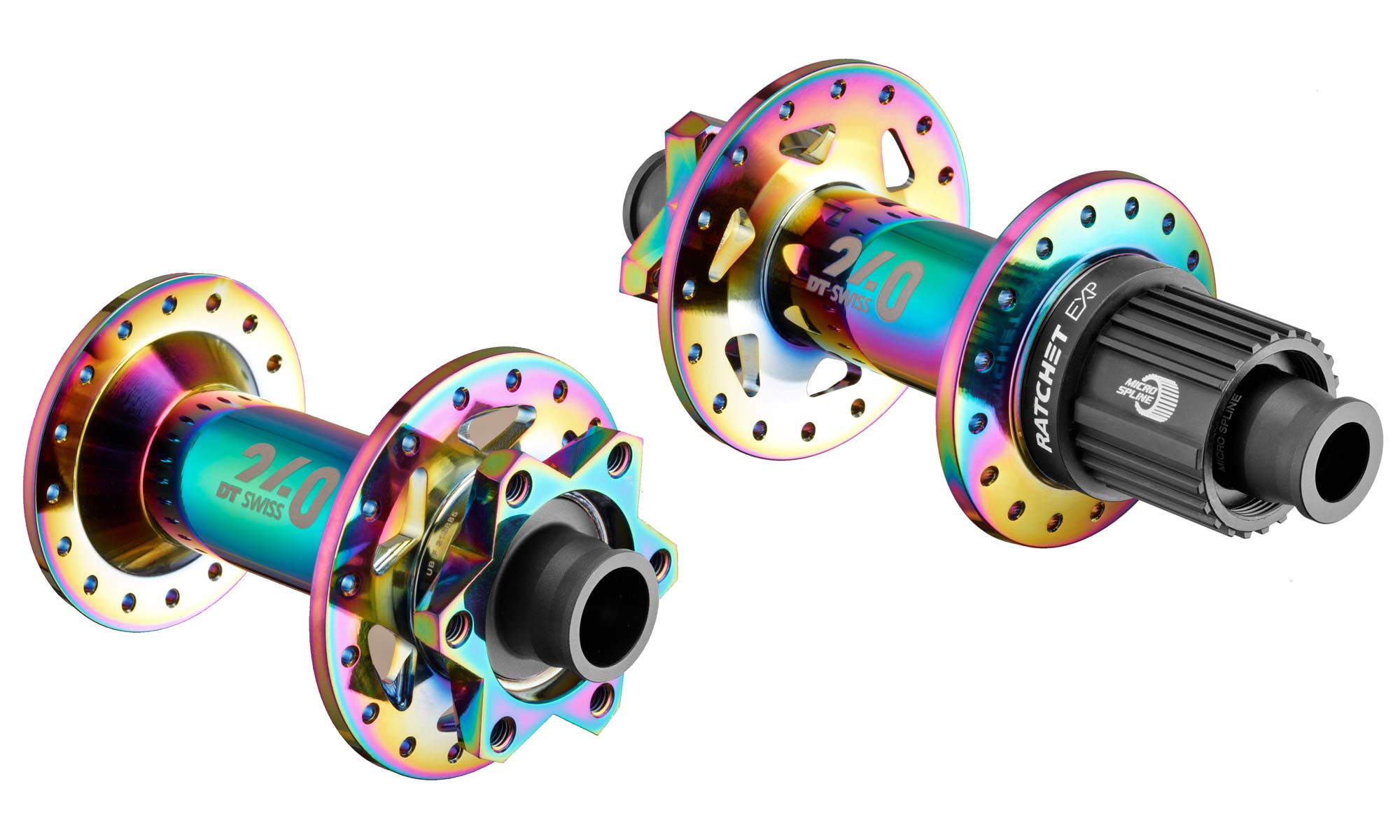 The limited edition 240 Oil Slick hubs appear to be limited to only one build spec of DT Swiss’ Classic MTB hubset. That means they will be Boost-spaced thru-axle, IS 6-bolt disc brake, and feature 32 hole drilling for J-bend spokes only. You do get to pick from either Shimano Micro Spline or SRAM XD freehubs. 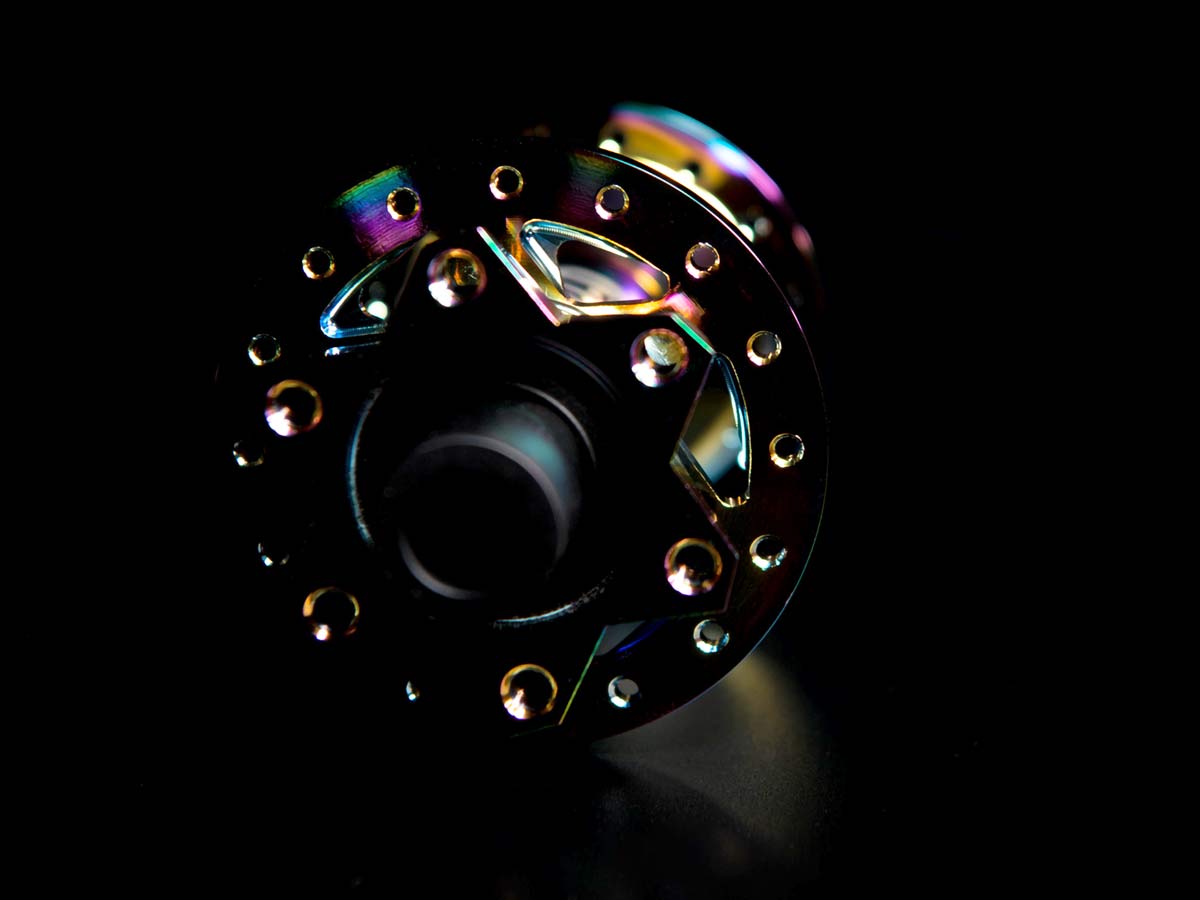 All of the tech inside is the same as the set of new black & red 240s I built up into a trail wheelset last spring. That means the same lighter, simpler, lower-maintenance Ratchet EXP mechanism with its standard 36T ratchet and wider bearing spacing. 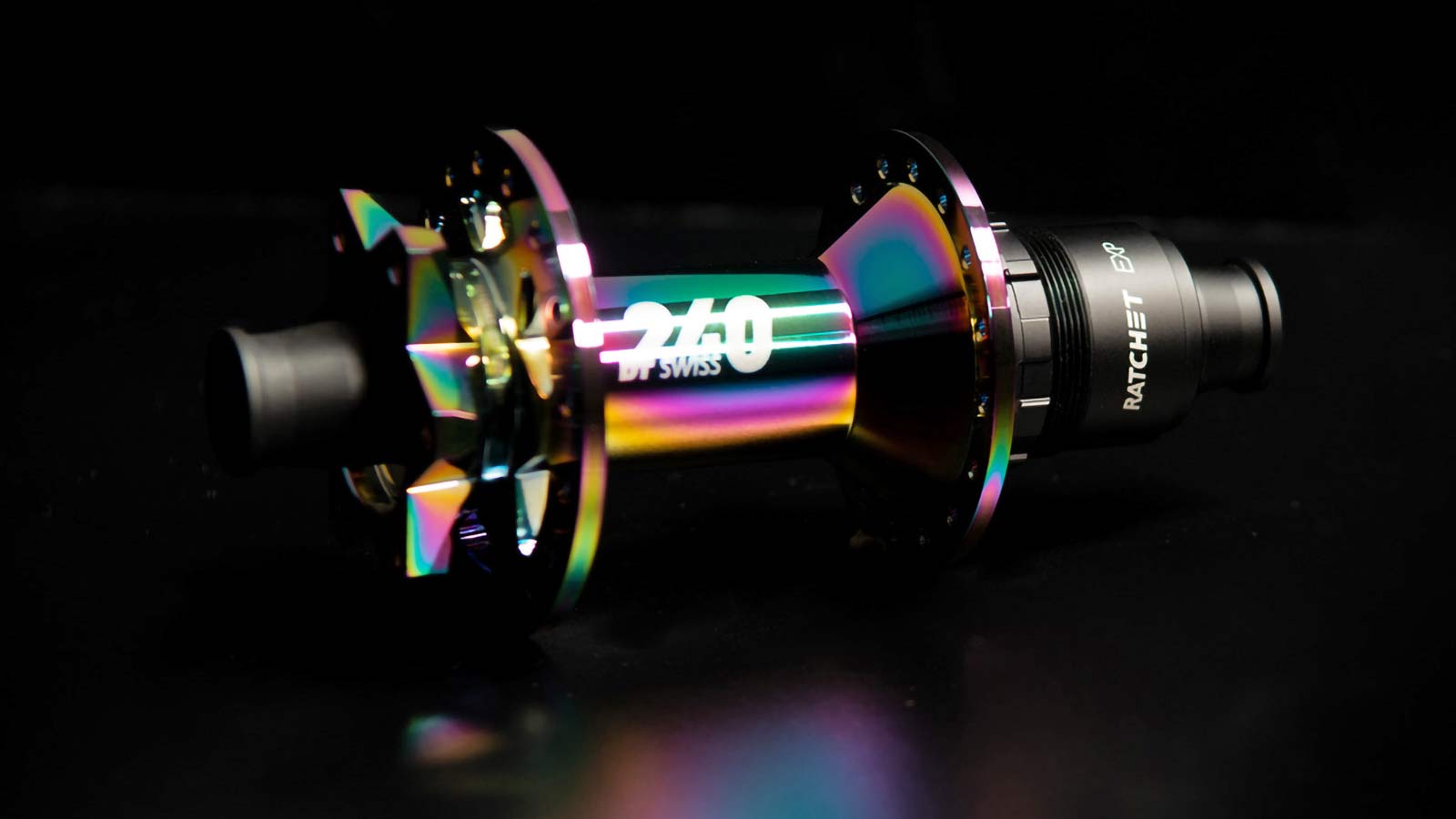 The special edition 240 hubs will sell separately for $236 / 160€ front (142g), and $477 / 324€ rear (225g), just a bit more expensive than the lowest-priced 240s. Remember, a thousand hubs could go fast. Reach out to your favorite bike shop or custom wheel builder now if you have a mountain bike just begging for some shiny trial wheels.

Regardless of limited colors hate to be the one to point out the obvious but here it is. In this year of Covid and looking at all the aftermarket hub manufacturers DT Swiss has done the absolute worst job of keeping stock of their hubs. Yet they are by far the largest mfg of them all. How much sense does that make? If you’re a builder in the US just hop on QBP and take a look at their absurd restock ETA’s for regular 240 hubs, it’s either well over a month out for some and “Jan 2022” for others! Just when you thought things were getting better.

Thesteve4761
Reply to  K-Pop is dangerous to your health

You might for a second consider that Qbp and the USA don’t represent the majority of where DT sends its parts. It’s almost like they’re a global manufacturer who needs to deliver private label, oem, and aftermarket parts. It’s almost like the upheaval of the last year would hit a brand like that the worst. You might think that they chose to take care of their highest volume and longest standing customers and weren’t left with a lot of excess capacity to support their relatively small aftermarket growth.

Or, QBP screwed up and didn’t order enough because Tauer over reacted last February when Covid hit Asia. Or that.

K-Pop is dangerous to your health
Reply to  Thesteve4761

Thanks for clarifying, it’s been a hard pill to swallow. Especially that up until Covid hit DT was stellar at keeping the aftermarket stocked. I could get any hub or part in 2 days max, then all of a sudden nothing for weeks and now up to 11 months out. Hero to zero in the blink of an eye. You could add upside down logistics and access-cost of raw materials to that list as well.

Thesteve4761
Reply to  K-Pop is dangerous to your health

I have zero insider information. Just an educated guess.

Long lead times suck. DT is not good at reducing their lead times on their own, even before the Covid bike boom….

The loss of access to cheap airfreight when passenger flights stopped also didn’t help. 100% of the US hub supply comes from overseas at some point in its life. Hubs usually fly. When they have to float, especially from Asia to Minnesota, it takes a lot longer.

I can’t wait to see these at Wheat Ridge Cyclery!

32h only is a hard pass from me, but they sure are pretty.

Just because it is technically possible to oil slick anodise anything doesn’t mean it is necessarily a good thing. These just look like cheap knock-offs. The new 240s are great hubs in their standard finish. I just can’t see what this adds. Maybe try other solid colours as an alternative (silver springs to mind!), but these are hurting my eyes. Each to their own I guess.

this looks like a $10 Aliexpress special that will explode at any moment. anything oil slick just looks like cheap garbage. i remember laughing out loud when i saw SRAM oil slick their top end components. i bet the fakers in Asia were thrilled that their knock off parts instantly looked like premium offerings.

Oil slick can look good in my opinion, but the finish on these hubs looks cheap.

bmx brands were all over oil slick more than five years ago. it funny how brands like DT are also suddenly realizing the value of the limited drop to increase brand hype. welcome to the 21st century finally, bike industry. try to not get too high on your own supply.