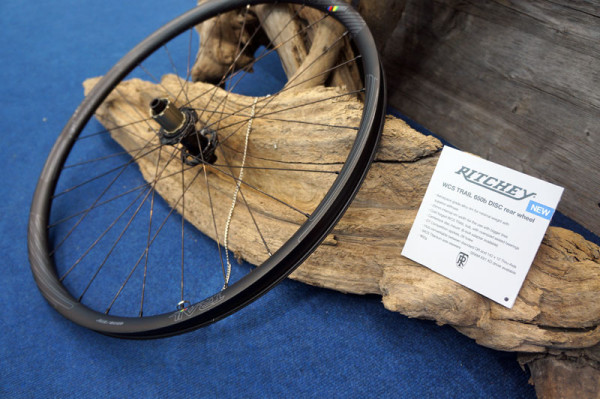 As usual, Ritchey’s tradeshow booth was littered with new products for both road and mountain bikes, along with a prototype part. Technically, it’s a teaser to a possible prototype, but we’ve put the pieces together and it’s looking good.

As for production parts, the new WCS Trail 650B mountain bike wheels bring their wider, tougher component line to the middle sized wheel market. The hubs are convertible between QR and thru axles front and rear -including 20mm for the front- and the freehub can be standard or XD Driver. Disc mounts are Centerlock, sitting on forged hubs rolling on oversized sealed bearings. Inside width is 25mm.

Roll through for closeup photos on this and plenty more… 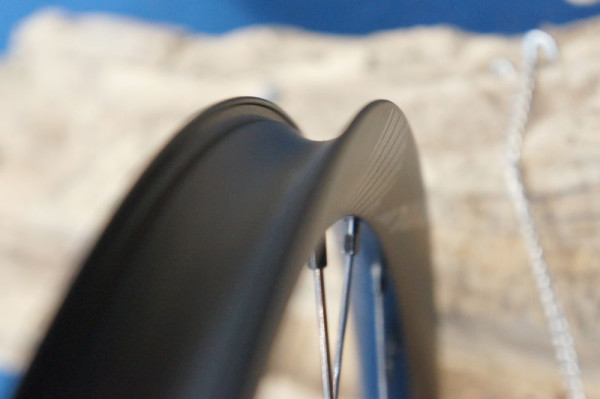 A short sidewall and small bead on the aerospace alloy rim extrusion should help tubeless tires seat easily. We’ve had pretty good success with the Vantage XC wheels, but these are 5mm wider to handle fatter tires. 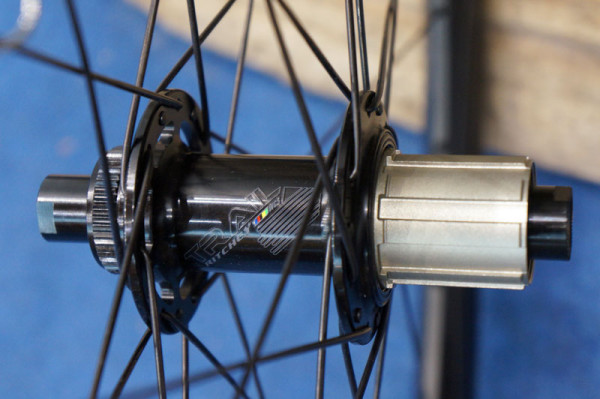 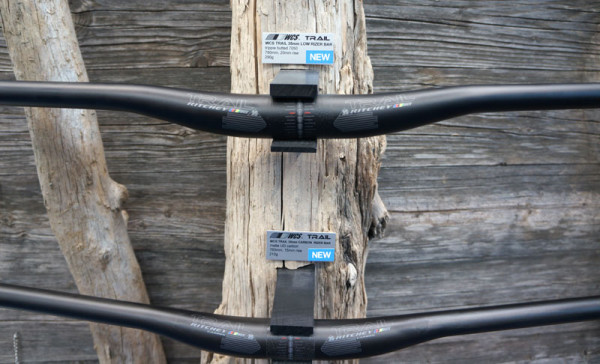 To go with the stronger wheels, they’ve added 35mm diameter WCS Trail handlebars in both carbon and alloy. The triple butted alloy model (top) has a 20mm rise and 780mm width. Weight is 290g. The carbon version is 760mm wide with a 15mm rise, coming in at just 210g. 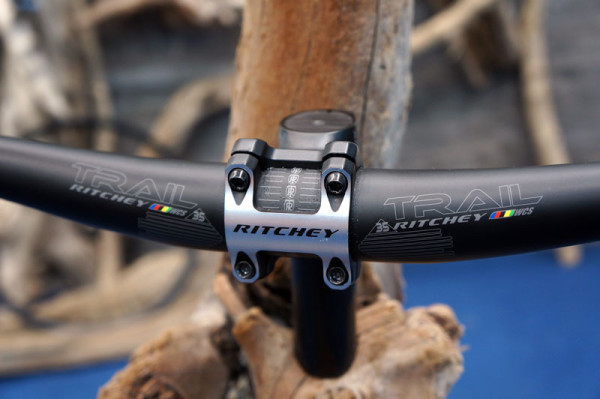 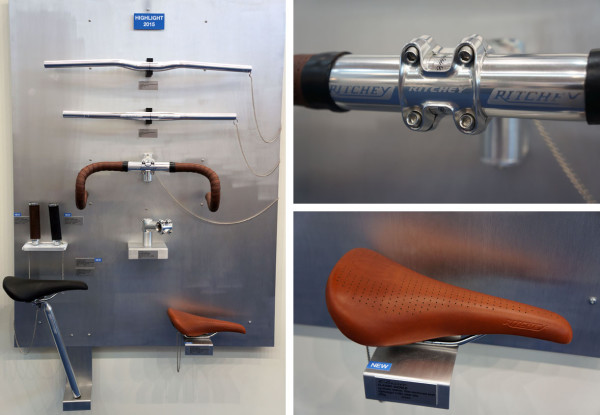 For a less extreme bike, their new Classic series of alloy mountain and road bike bars are polished to a shine. They’ve also got retro leather bar tape and saddle to go with them. They look fantastic in person! 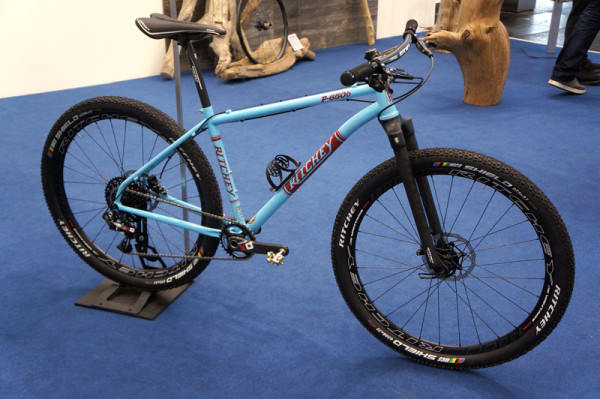 The P650B frame is updated to get a true tapered headtube. That was one of the issues with the project bike we built, finding a headset and a modern suspension fork was pretty difficult. This update makes the bike far more versatile up front. 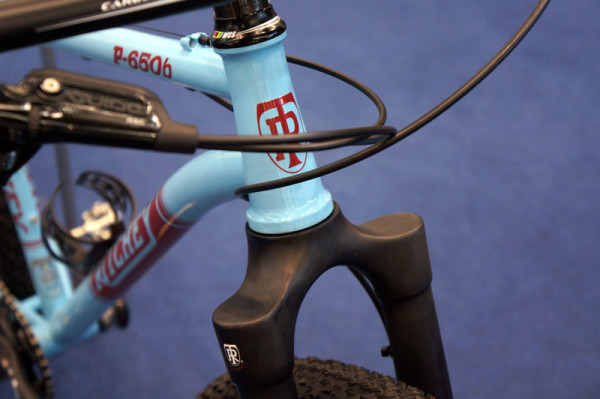 They also updated the rigid carbon fork to have a tapered steerer, too. 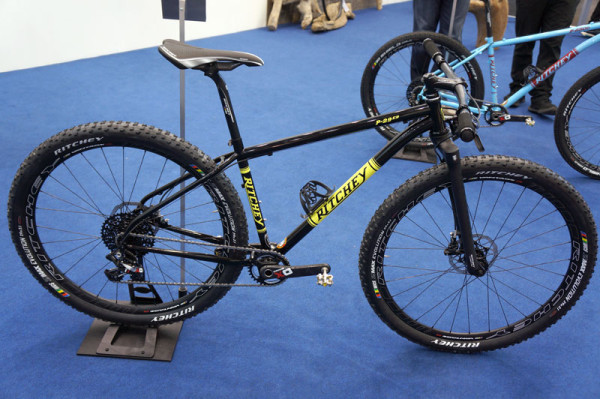 The P29er gets the tapered headtube, too, and switches from its original sliding dropouts to the same forged steel quick release dropouts. Yes, we know and Ritchey knows – some people want sliding dropouts. But some people don’t and they acknowledge they’re not going to please everyone. So, they made a purpose built bike that’s as light as they could while offering the classic ride of a steel hardtail. 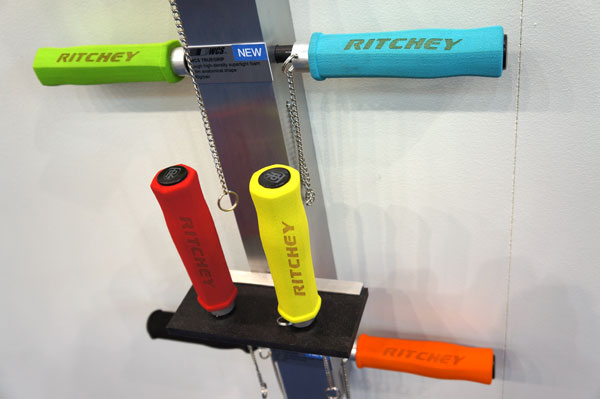 Assuming you’re going rigid, their foam grips might help keep your hands in shape, and now they come in a rainbow of colors! 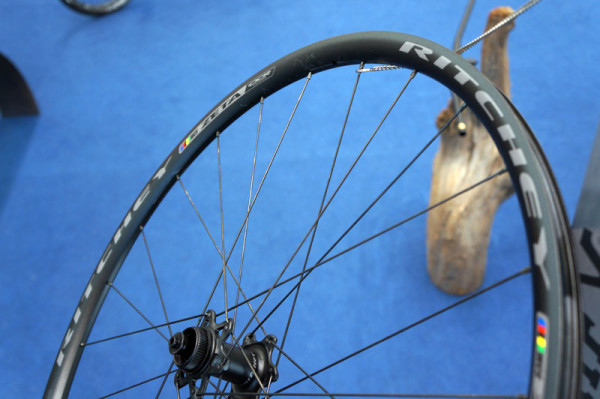 On to the road bits: Last year, Ritchey unveiled the Zeta II road tubeless wheelset in alloy. They brought along new hubs and a slick spoke lacing pattern that keeps them from rubbing on each other. This year, they added a disc brake version with Centerlock rotor mounts. 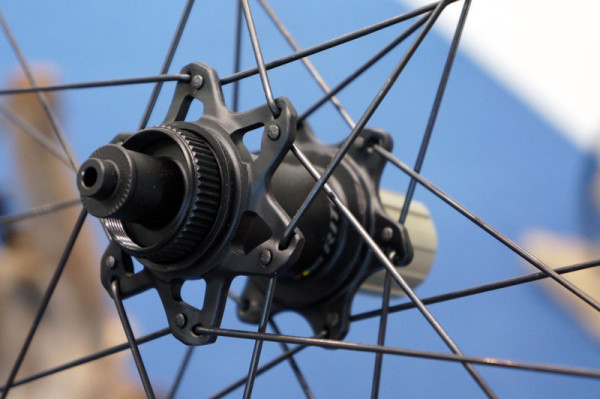 The standard J-bend spokes are slipped through offset flanges so that they don’t touch as they cross. Check out last year’s coverage for a close up photo. It uses the same hub construction, allowing the freehub body and axle to be quickly removed without tools -with the cassette still attached- so it’s easier to pack into a wheel bag or bike case.

Not shown, Ritchey’s using a new carbon fiber rim manufacturer for the 2015 WCS Apex road wheels. They’re 60mm deep and get a new brake track composite construction that uses a blue, basalt-based brake pad. No word on how quickly (if at all) they’ll start using that manufacturer for their other carbon rims. 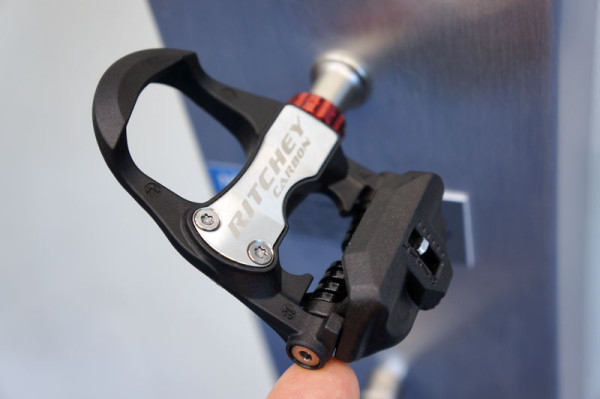 Sitting somewhere between road and mountain is this possibly upcoming mini-SPD (left). It’s reminiscent of some of Tom’s earliest pedals, but with an absolutely minimalist construction. We’re thinking it’s perfect for gravel grinders – light, small and allows for mountain bike cleats and shoes. But, what’s more interesting are the design cues that seem to go from it to a few of their sponsored pro’s pedals. On the right is the current WCS Paradigm (reviewed here). 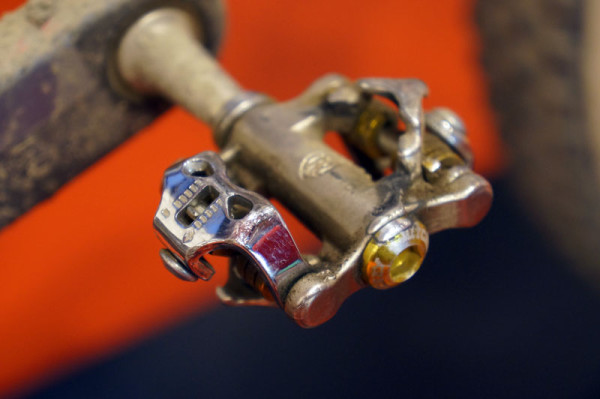 This one’s Nino Schurter’s pedal, raced at the Meribel World Cup in France. Note the cutouts on the rear retention claw, just like the ones on the new mini pedals. 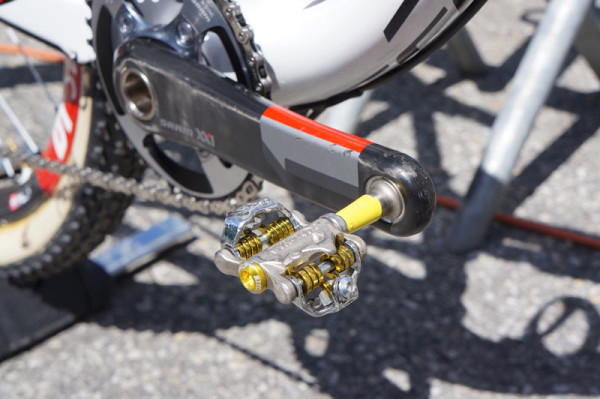 Nino’s teammate Florian has the same ones (above, from our Scott team bike check post). Note how much material has been shaved off the pedal body at the outer edge. The central section is also a bit leaner, but with more of a tread platform on each end. The downside could be smaller bearings or even a move to bushings to accommodate the thinner profile.The WCS Paradigms are already some of the lightest full featured pedals out there, so we’re pretty excited to see if these team versions come into production. 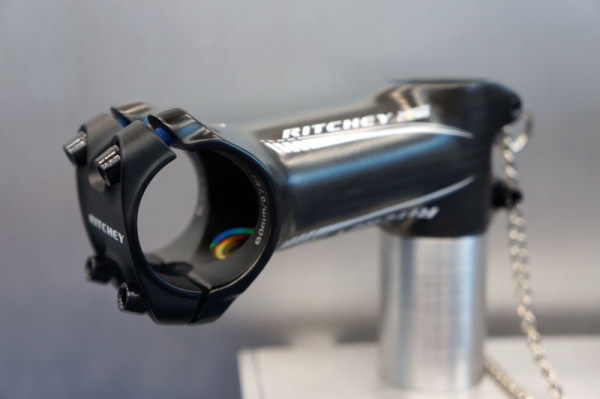 To go with it, they’re introducing new WCS C220 stems. While they still say the C260 stems offer the best clamping strength, the C220 allows for easier installation while keeping things ultra stiff. And, they say you can pop the handlebar straight in, just as you would with a tradition stem despite it wrapping more than 180º. We tried it at the show and sure enough, it’ll slide in and really doesn’t scratch the bar. 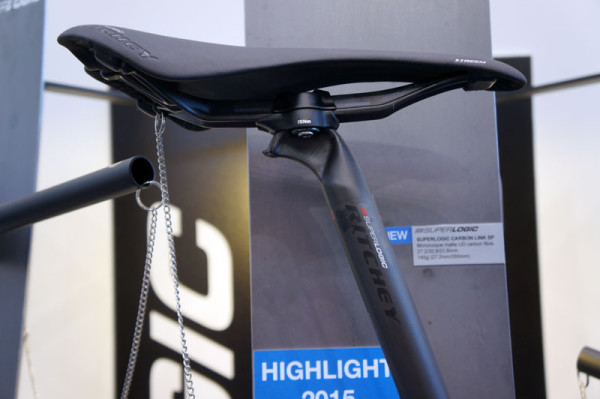 The new Superlogic Carbon Link seatpost borrows the shape and flex from their Trail posts with their full carbon head. It’ll work with their standard or Evo link mono-rail. Available in 27.2/30.9/31.6. Claimed weight is just 145g for the 27.2/350mm size. 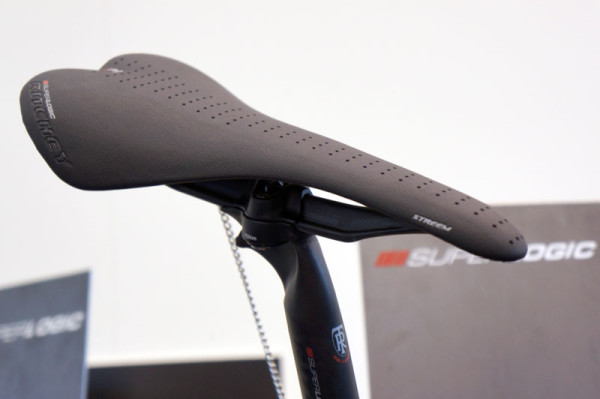 The new WCS Streem saddle uses thin padding and a unique carbon rail and shell to come in very light.

It’s just 121g on the scale. The rail design allows for a wide range of fore/aft adjustment, and the shell flexes a bit to be more comfortable. 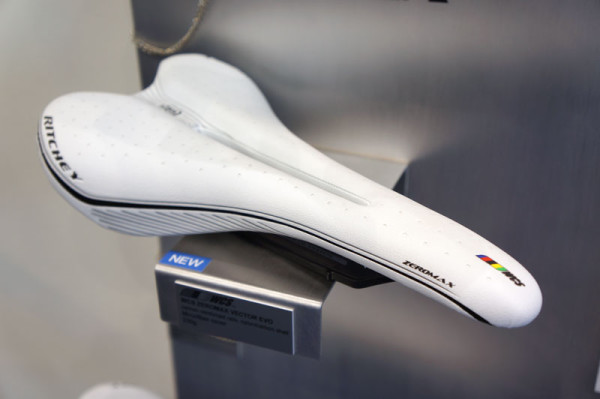 The new WCS Zeromax Vector Evo saddles provides a flatter shape than their other saddles, plus more padding under its microfiber cover and a small center relief channel. Weight is 230g.

lots of theft at the Ritchey booth?

Some interesting stuff going on a Ritchey. I like the tapered head tubes on the P29er and P650B. I’d like to do a P29er as a SS. Those pedals Nino and Florian are running look like a double sided version of the mini-spd.

Finally, proper wide mountain bars from Ritchey. Nice products, but Ritchey seems to trail about two years behind trends on the mountain side.

The reason the mystery pedal body is so slim is because its made out of Ti. …duh. GET A MAGNET.

@ Ripnshread
Well, you’d really need an alloy magnet, just to make sure that the pedal body isn’t made of aluminum either.

I’m digging the post. Have a previous gen superlogic and it always slipped on the trail. Makes a great road post though.
I’m also digging the new P29. Always liked how it rode, but didnt so much like the lack of a tapered headtube and the sliding dropouts.

Hey turtle i have a friend in france that make custom steel tapered mtb, returns from owners are very positive.

I like how the crossed spokes don’t touch each other on the Zeta II wheelset. And the saddle/seatpost design is interesting too. Hopefully, those items won’t cost a fortune.

Finally! Sliding drops are gone on the P29! And the new colors are awesome.
(deleted)

What about the carbon road breakaway? In production yet? still not on the website.

Crossed spokes add lateral stiffness to a wheel. Not sure what problem Ritchey is trying to solve.

That Zeta road hub is very striking and @ bikermark, the spokes do cross. they just don’t touch, although I can’t figure out what that does for you. I’ve had a set of Pro DS road wheels on a CX bike for years and they’ve been my best road wheels so Ritchey clearly has a clue and stuff like offset rims and asymmetric hub flanges aren’t snake oil.