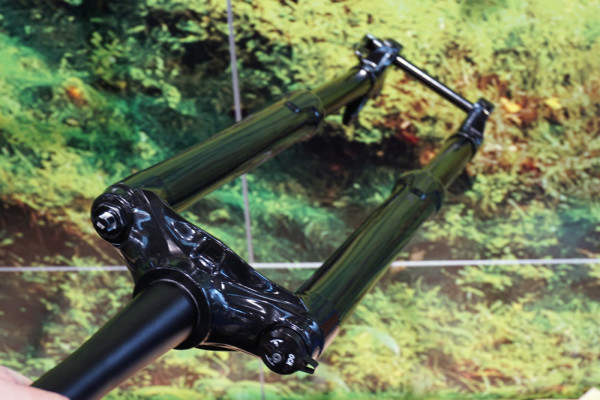 First shown in Taipei earlier this year, the RST inverted suspension fork already has a new design, suggesting it’s still very much a work in progress. But that work is yielding some great specs and changes…and it finally has a name: Rebel.

First up, it’s now opened up to use the Boost 110×15 axle standard. That means clearance for up to a 3.25″ tire. Travel is bigger, too, with the 29er version able to have between 80 and 130mm travel. The 27.5+ model will get 100mm to 150mm. That puts it more in the range of the perhaps too similarly named X-Fusion Revel than the Rockshox RS-1. What makes it unique is the way they control the damping (or, rather, let you control it) and how they’ve keyed the axle… 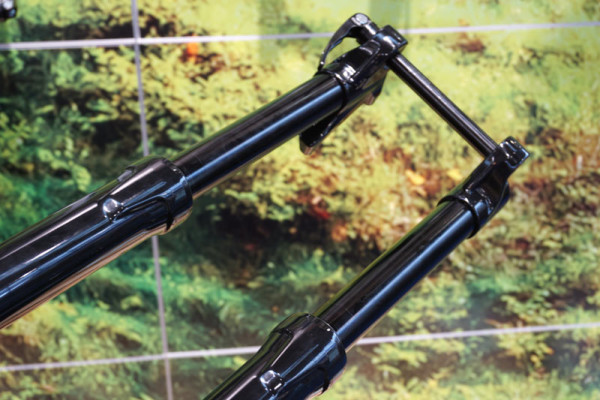 The Rebel has a magnesium upper with alloy stanchions and steerer. 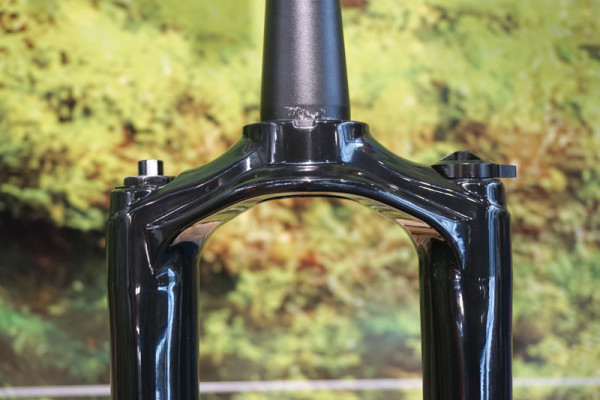 It has a 2.1kg claimed weight, but they’re still working on the internals, and this is the first shot of the casting.

This prototype is shown with the lockout cartridge, but given the travel they see it as more of a trail fork so it’ll probably get their trail damper with external low speed compression and rebound controls and an internally adjustable high speed shim stack. There’s no nitrogen charge behind the IFP to keep pressure on the damping circuit’s oil. Typically, that charge has about 300psi that helps push oil back through the rebound circuit and minimize foaming, and the nitrogen charge is what pushes back against the oil’s compression. Instead, the Rebel has an air valve so the rider can pump about 70psi into it, which they say creates a lower friction system since you don’t have such a high pressure pushing on the IFP’s seals.

The axle’s held straight by using a keyed system, locking the axle into position and preventing twisting and uneven leg movement. Click to enlarge the image and you’ll notice two bumps on the top and bottom of the axle insert. 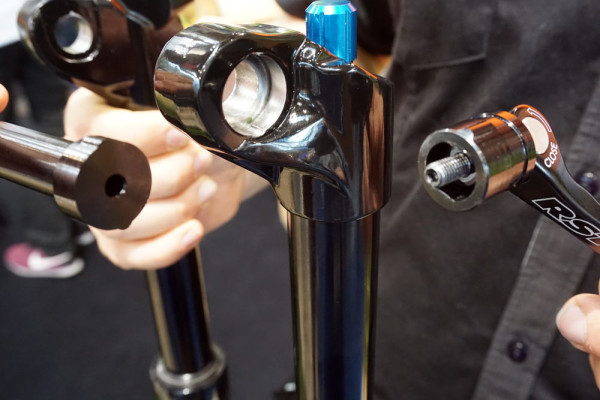 The other side is keyed, too, which locks the axle’s rotation on both sides, preventing twisting. The quick release lever loosens the entire assembly threads out to remove the axle.

It gets a 180mm rotor mount and is likely to be ready for retail by Eurobike next year as a 2017 model. Pricing TBD. 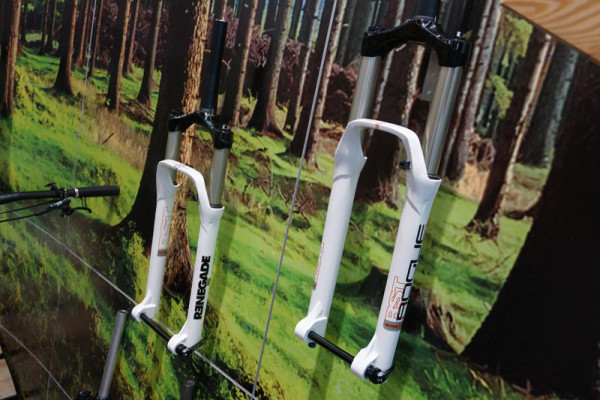 The Rogue 27.5+ fork will get a closed cartridge damper, and the new FIRST+ forks (not shown) use an open bath. The 32mm stanchion Renegade fat bike fork is in full production and shipping. It’s offered with straight and tapered steerers, 80-120mm travel and external compression and rebound damping. 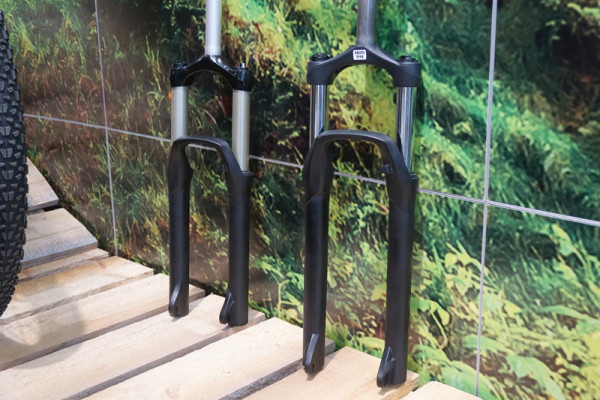 New Alpha is an entry level Boost fork that gives OEM customers an inexpensive QR option for building a Boost bike. The lowers are magnesium, but use steel 32mm stanchions. Internals use a coil spring with hydraulic damping. Despite the price conscious nature, they made it stiff so the rider experience would be better.

On the left is a new 120mm 24″ fork with 32mm stanchions that’s in development. They have it working at 80 and 100mm of travel, but they want to go bigger to give kids something for more aggressive riding without having to stick a 26″ fork on a 24″ bike. It’ll have open dropouts and be disc brake only, both concessions to keep it affordable. It’s air spring with a negative coil spring and open bath damper. Weight should be around 1.75kg.

Looks cool…more industrial the RS1 and less cartoony then the xfusion (secretly I like the gold). Hopefully it works great and cost reasonable.

“they made it stiff so the rider experience would be better.”
sweet.

Tell me more about the boat anchor OEM boost stuff, with quick releases…

damn, wish they’d made a DJ version of that 24″ fork, I get along fine with a lowered 26″ but a built for the job fork would be awesome. I admit my tastes are somewhat eccentric, & are probably not very profitable, however.

Someone, anyone, who ever is listening, please add the arch back onto these inverted forks. I cannot stand how much flex my RS1 has; I feel like such a tool bag having bought a bike with one. Of course, coming from a Lefty doesn’t help matters.

@RR- Maybe I am getting your tone wrong, but there are people who can’t budget for the latest and coolest stuff.
@Ryan S- sorry to hear you’re unhappy with your RS1. IMO, inverted forks are about style and not substance (except for the Lefty). Inverted forks by their nature don’t have an arch, which is why they’re so flexy. Seems to me Rock Shox made the fork as a PR stunt more than anything. Magazines for whatever reason were loath to pan the fork in reviews, even though it is flexy as can be. Maybe the RS1 has good resale value and you can put your Lefty back on the bike?

@Ryan S
totally agree on the RS1. got mine with my new bike and hate it: no chance to hold the line in steep eroded sections. sold it + wheel as set and bought a slightly used sid wc + a new lighter wheel and had some bucks remaining. so time is god to sell the RS1 as long as not everyone knows, that it’s a horrible fork 😉
hopefully the rebel is much better in torsional stiffness.
agree with @Tim

@Tim – Lefty went with the old bike. Would’ve hurt resale to much to keep it. Think you’re right about resale – I am thinking of selling it.
@xc-fr – How’s the WC? I’m thinking of getting the standard XX with alu upper. Maybe for a 45kg World Cup Pro women the RS1 is fine, but for a 80kg rider, this thing is ridiculous. I am amazed Jaroslav rides this fork.

D*mn, initially they were saying 1.7kgs for the Rebel now 2.1 kgs

@Bazz- that’s what happens with inverted forks. The designers add weight to shore up stiffness to a point that it’s just barely acceptable (or even less, judging by what RS1 buyers have to say).

@Ryan S – it’s perfect for me. i’m 71kg. it’s my second one: have the SID WC also at another bike and therefore my decision was done very fast. would never go back to RS1 -> it’s a faulty design from my point of view.