OK, so I’m a bit of a sucker for a crazy light XC hardtail, and Ghost’s carbon Lector does a pretty good job of delivering on that. When we first spotted a disguised prototype of it last year on the World Cup circuit, it was the lightest complete XC bike we weighed that season. Now Ghost is coming back with an even lighter build, at less than half the cost. How? The Lector X drops the suspension fork for a rigid carbon deal. As Ghost says, “Comfort is for wimps!” And while bigger wheels have pushed XC racing faster, Ghost has now reworked an XS 26″ version of the bike into the Lector Kid, a race-ready XC bike for young up and comers… The Lector comes in 12 models for 2017, but this full rigid bike is the standout. With a price tag of 4000€, you won’t find many XC bikes that can compete with an 8.3kg claimed weight. Developed for the purists that want the maximum speed, whatever it takes, it’ll be hard to beat the Lector X up the climbs. The trick will be the descending, but Ghost assures us that the boxy full-carbon, tapered-steerer rigid fork will not only offer light weight, but also is designed to eat up some of the pounding vibration. Plus with the addition of Boost spacing and thru-axles, there really is no way to get even more precise steering out of a mountain bike. Paired to the premium Lector 29 Ultra Lightweight carbon frame, the bike build gets a pretty standard 1x spec, having trimmed a lot of weight off the front end. It mixes GX shifters, an X1 rear mech, Race Face Next cranks, and Level TL brakes. It does trim a bit more weight with a set of Ghost’s own branded carbon wheels.

Anyway, who really needs a supple suspension fork to coddle you over the bumps if you are truly hardcore enough to be fighting for the tenths of a second that separates the steps of the podium?! While the standard race version of the Lector opts for fast-rolling 29er wheels, and a couple of the lower spec models even offer a 27.5″ wheel option to fit smaller riders, the 26″ wheel had been dropped altogether. But Ghost realized when they developed the smallest of the 27.5″ bikes, if the gave the bike 26″ wheels again and a 26″ fork, the got back to such low standover (650mm) and short reach (391mm) that it would make an excellent race weapon for kids coming up in the XC scene. Thus, the Lector Kid was born. 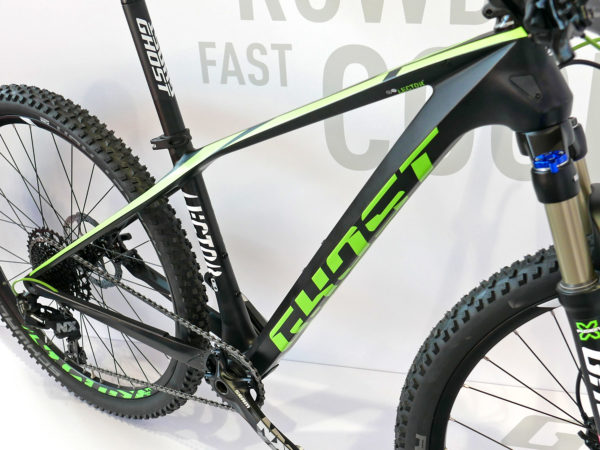 Using a lot of the same tech and their second-tier LC carbon layup, the Lector Kid keeps the price down while getting junior of a light XC bike. The result is a still light 10.3kg weight claim and a retail price of just 1500€ (not sure how many lawns you have to mow to earn that?) At that price the Kid gets a respectable 11 speed 1x thanks to the new SRAM NX group. It also gets both standard thru-axles, modular internal routing, stealth dropper post compatibility, and short stem trail geometry that you find on the top adult mountain bikes these days. The fork is the 100mm travel X-Fusion Velvet RL2 which is said to work well at low pressures for light riders, and hydro brakes by Tektro that work with small hands. The frame also shares the same rear end as the adult-focused Lector, so while the fork is 26″-only, there’s room in the chainstays for a 27.5″ wheel so the bike can grow a bit as your little racer does.

I want the X

I’ve been looking everywhere for a boost rigid 29+ carbon fork, this may fit the bill..
Ghost – what are the specs and would you sell one to me please?

Honest question: why does it have to be boost?

Where can I buy the lector kids. I understand the shortage but am having a hard time finding ghost bikes for sale