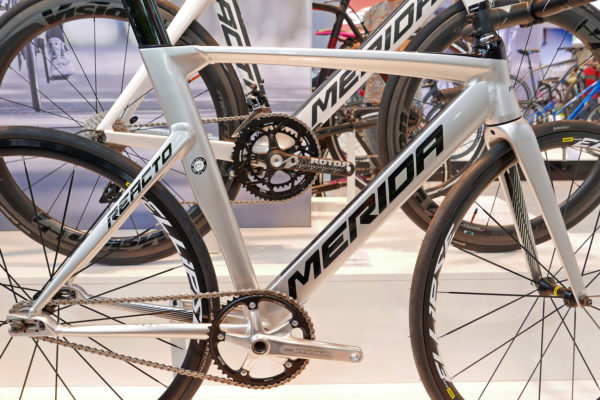 From the ground up totally new, Merida has redesigned their 160mm travel enduro bike. The new One-Sixty gets its first carbon main triangle to bring frame weight down under 2.5kg. With short 430mm chainstays, long 445mm reach, and slack 65.3° head angle, the new One-Sixty is looks ready to drop-in on the most technical mountain tracks.

At the same time, designed to race around much smoother tracks, Merida has introduced their new alloy Reacto Track. Whether for training on wooden velodromes or classic winter training, their first track bike fills a gap that Merida had in their line, and pulls from stiff and aero tech that they’ve refined on the road for many years. Take a closer look at either or both o these polar opposites, below the fold… Merida built the rear end of the One-Sixty out of a new 6013 aluminum alloy that can be pushed to even thinner walls, while still delivering the durability and strength needed for off-road riding. This alloy gets its first application for the company in 2017 with this new chainstay/seatstay assembly.

The front of the bike gets a carbon main frame, but even there Merida developed a new application of some of their new tech to help it withstand the rough life on an enduro bike. The frame uses carbon plies reinforced with nanoparticles that claim to strengthen the matrix between fiber and resin, boosting impact resistance by a surprising 40% over standard carbon. Suspension at the back of the bike is based around a faux-bar, single pivot design driving the shock with a 2-piece alloy rocker link. But it has a trick up its sleeve, and the bottom eye of the shock is mounted to an extension of the chainstay swingarm for their Floating Link design. That let Merida engineers better design the shock curve and progression, giving the suspension a plushness that feels like the One-Sixty has longer travel. Rock Shox provides Super Deluxe shocks for each spec in the new higher volume trunion mounts. And to match that new plush rear end, the One-Sixty pairs with 170mm travel Lyric and Yari forks. The bike uses a tapered steerer, a tiny 35mm stem, and gets internal routing with an oversized opening at the base of the downtube for easy routing, and modular Smart Entry cable guides that lock onto the housing to keep it from rattling around inside the frame.Of course the 27.5″ bike gets Boost Spacing as well. With the wider 148mm rear end comes substantially improved stiffness from them main pivot back to the thru-axle, plus a stronger rear wheel.

All of the bikes get stealth routed dropper posts and Rock Shox suspension.

For their first foray onto the velodrome, Merida took the design shaping of the TT and aero road bikes, and reimagined it for track. As a fixed gear first for the company, Merida wanted to develop a bike that could serve for proper track racing for amateurs looking to get into the sport, but at the same time realized that even as the hipster fixie craze is long behind us, most of these bikes will end up spending a lot of their time riding around the city streets. So even though the bike gets steep 73°/73° angles for quick handling, they also drilled the fork to accept a front brake for everyday rideability. Merida builds the new Reacto Track bike out of their top triple butted aluminum, with some of the same hydroformed tube shaping developed for their that is in their everyman alloy aero road bike.

Those shapes use the same NACA Fastback profiles that also sho up on their top carbon TT bike – the Warp TT – developed in the wind tunnel. Particularly, the downtube, seattube, and seatstays get aero profiles with cropped backs, so they are slippery in the wind, but not overly stiff vertically. The bike then gets its own track specific full, tapered steerer carbon fork. Of course you have to sweat the little details too, so Merida gives the Reacto Track a clean, wedge-style hidden seatpost clamp, inset into the toptube. The Reacto Track will come in 6 sizes from 47-59cm and is available at two spec levels. The Reacto Track 900 here will come in shiny silver, weight about 7.6kg and cost 1750€ with a local race ready spec. The more affordable Reacto Track 500 comes in hi-vis green and uses less highly finished wheels and cranks. Surprisingly the claimed weight is effectively the same as the more expensive bike, but this one will sell for just 950€.

Dang, that track bike looks good. I dig the dropouts too.

“With short 430mm chainstays, long 445mm reach, and slack 65.3° head angle…”
When you don’t include what size frame the reach number is for it means nothing. That could be a very short XL or a long M.