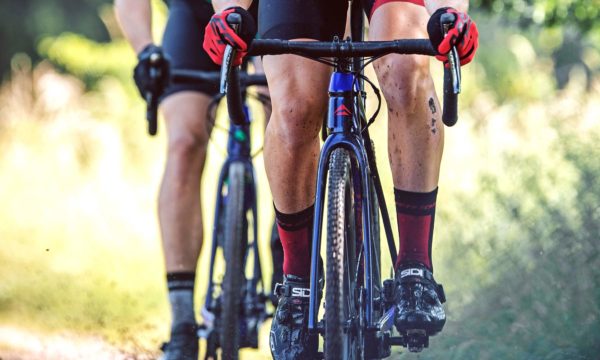 Merida has an all-new carbon cyclocross bike that they say is more race-oriented than their previous generation Cyclo Cross, while retaining much of that previous bike’s versatility. The new Mission CX is lighter, gets more tire clearance, and slightly more capable handling, yet still features stealthy detailing to work as an everyday commuter. 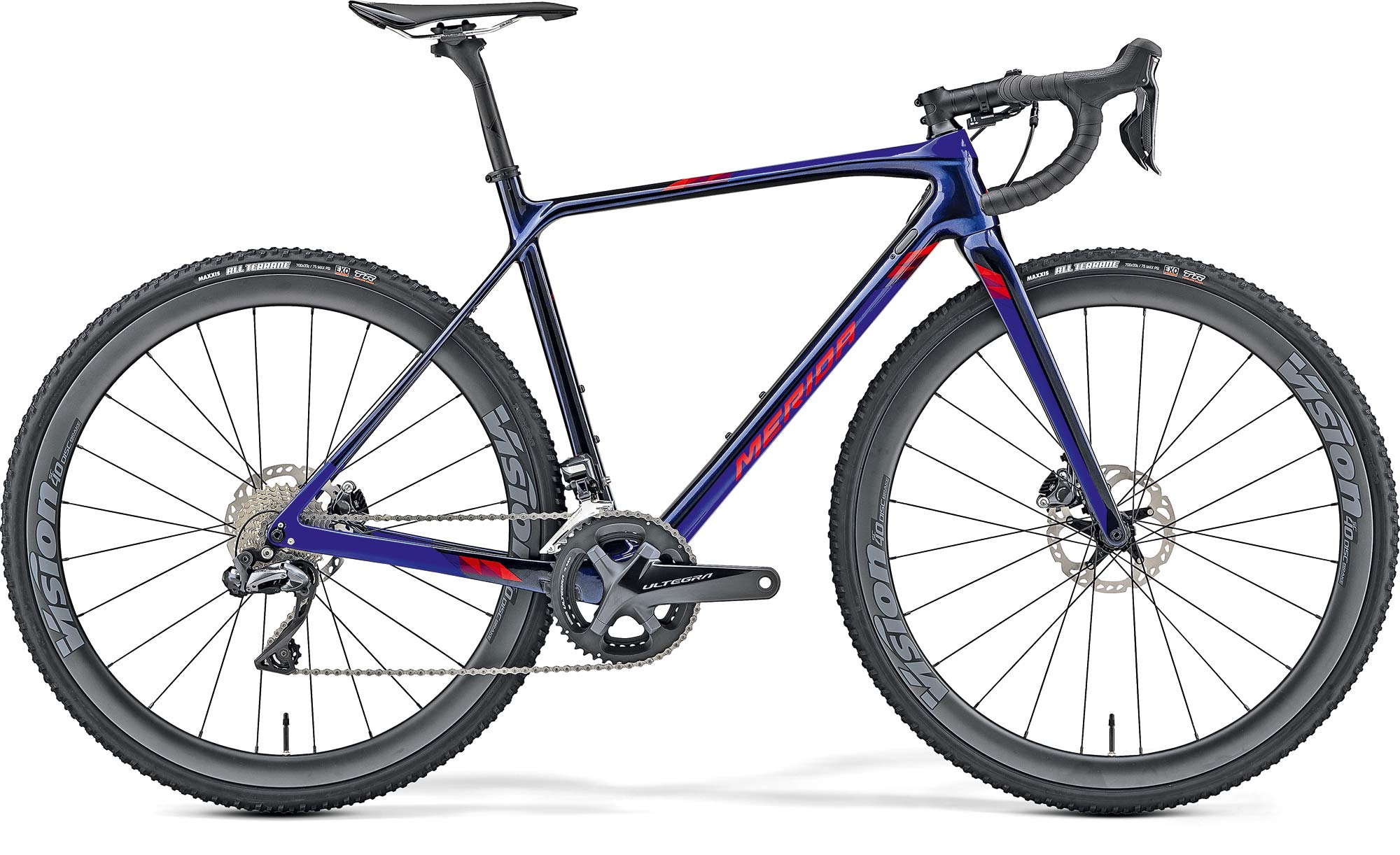 We spent a good bit of time riding & racing on Merida’s previous, aptly named Cyclo Cross and its sister brand Centurion Crossfire over the past couple years, but Merida thought they could do better for a race bike. The move to standardization of flat mount disc brake and thru-axles gave them the impetus for a bike redesign, so they started tweaking the geometry to build an overall faster race bike as well. 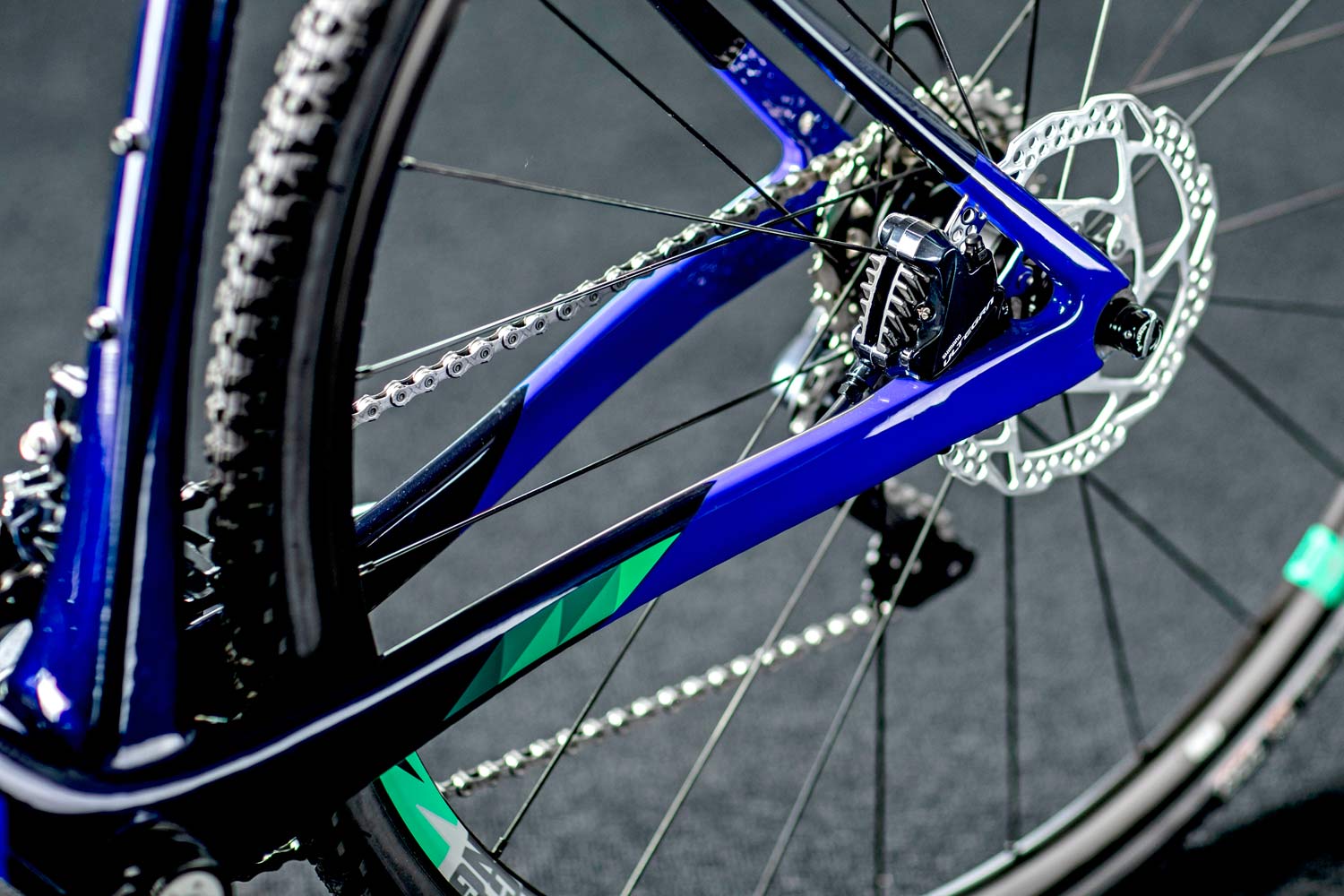 The new Mission CX gets the 12mm thru-axle and flat mount disc brakes that spurred its redesign. (Thats up from post mounts and a 12/15mm setup on the old Cyclo Cross.) 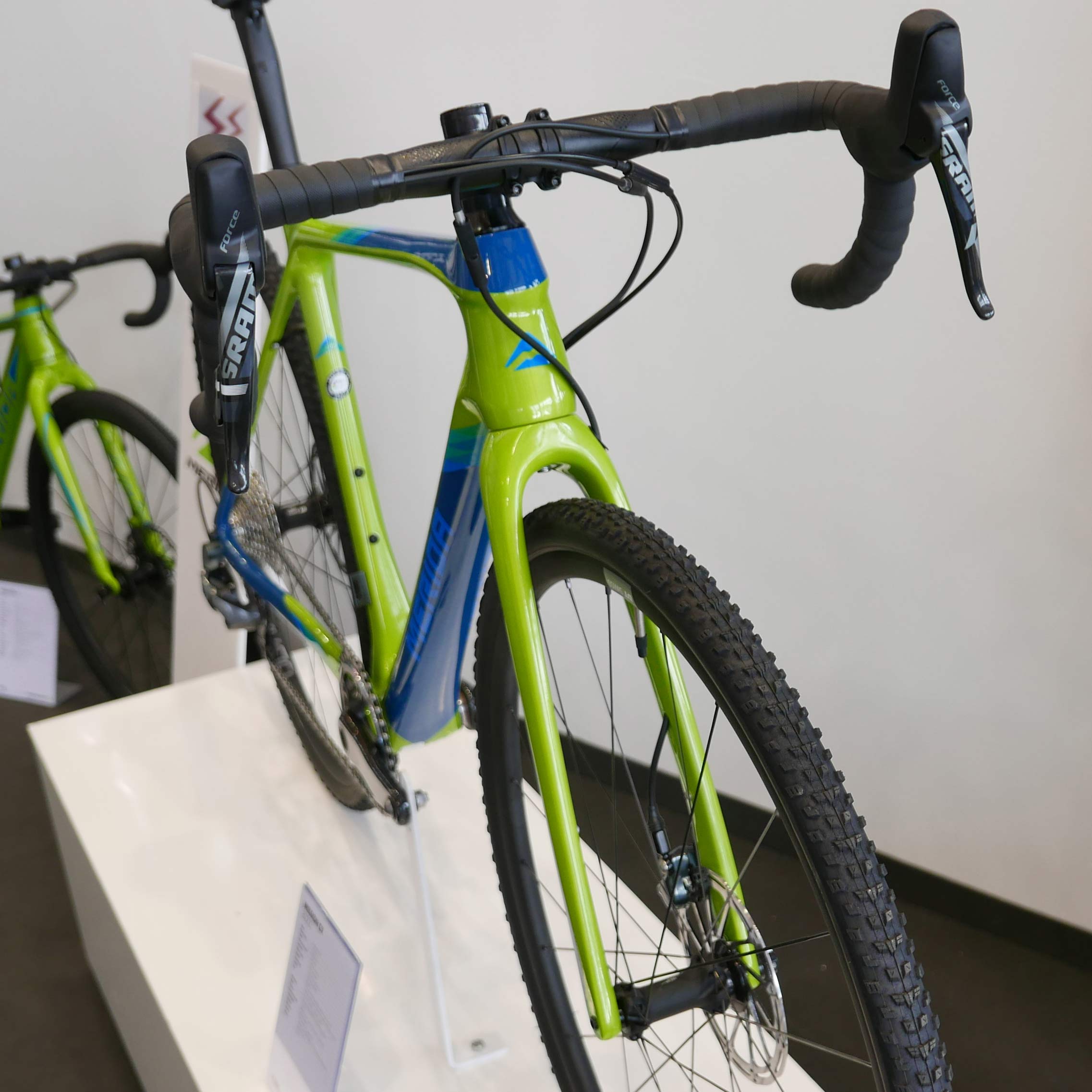 It also adds official clearance for 35mm tires (remember this is a race bike) with ample room for mud, around the PF86/BB71 bottom bracket. (Look to the all-road/gravel Silex for more clearance – 42mm in 700c, or 50mm in 650b.) 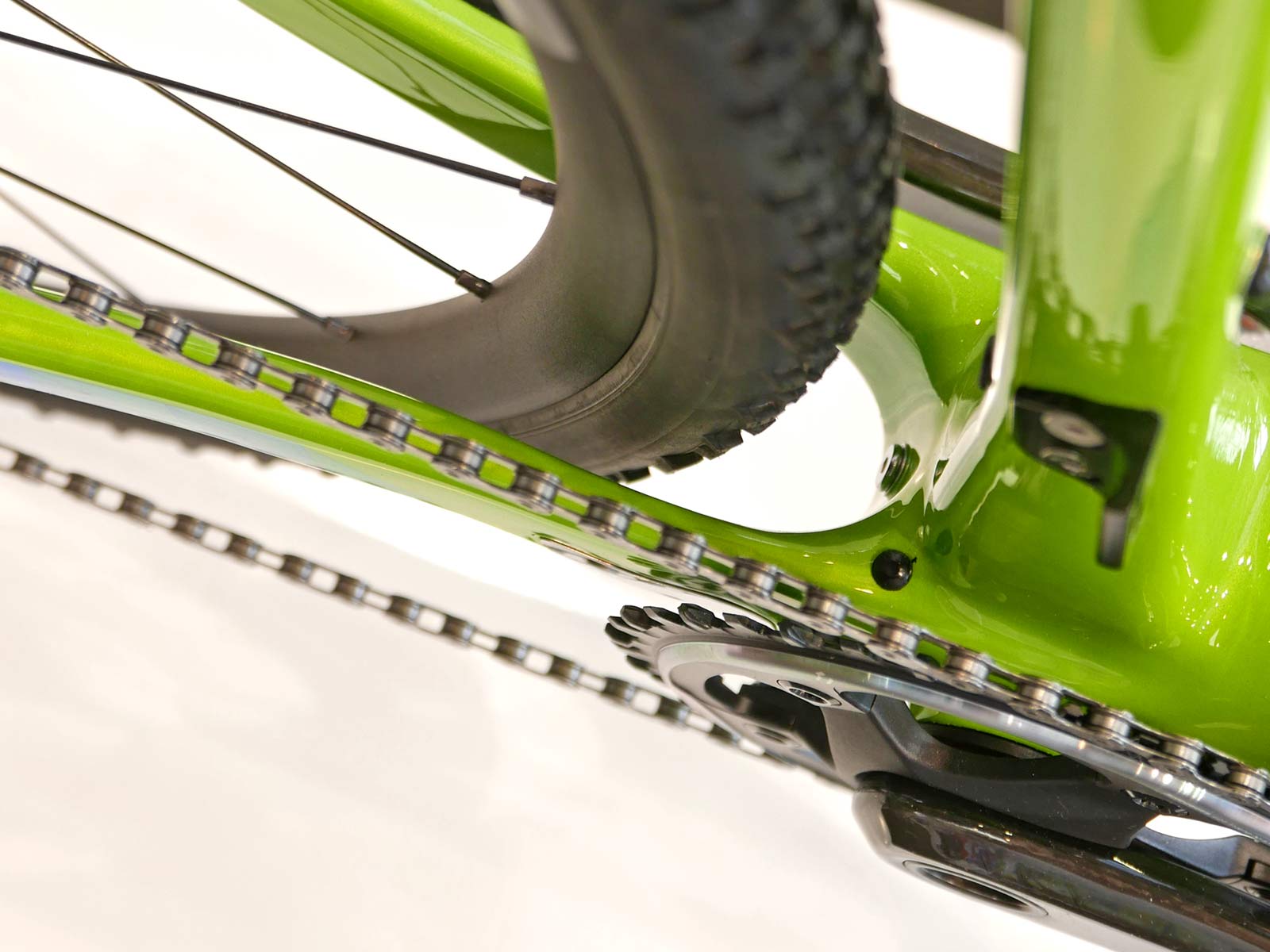 The rear end of the bike sticks with tall boxy chainstays that now go straight from BB to the axle for efficient power transfer. But the bike now features thinner, more flexible seatstays, and even a dropped seat cluster for added comfort. The bike also sticks with a 27.2mm seatpost to help provide a bit more comfort in the saddle, and the top model even comes with a ‘S-Flex’ seatpost to take that a step further. 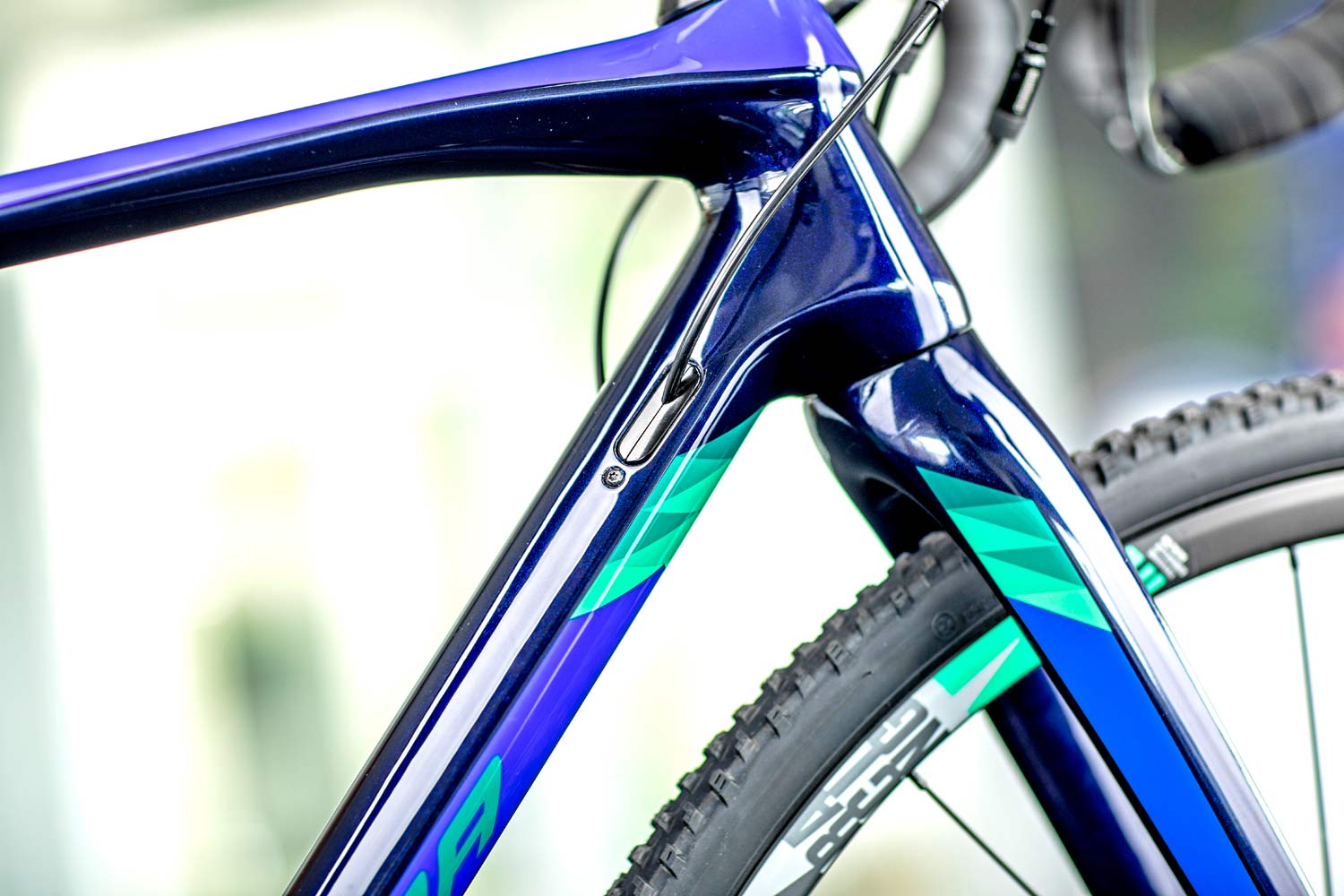 The bike gets new modular cable routing that Merida calls Smart Entry, which clamps cables securely in place to eliminate rattles. And the bike can be setup as a 1x or double drivetrain with a removable bolt on front derailleur hanger. 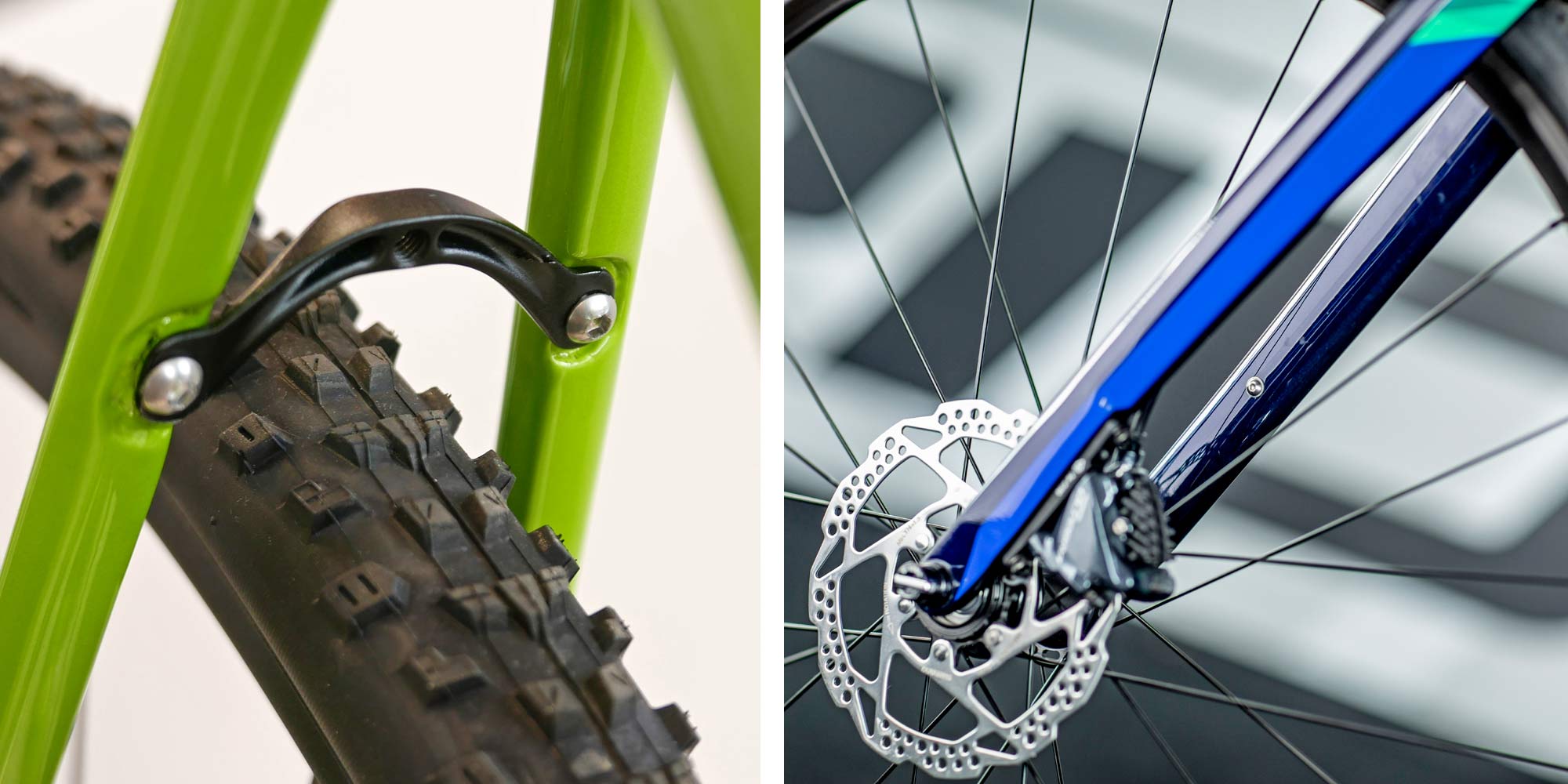 The new carbon bike retains full fender capabilities with a bolt-on (removable) seatstay bridge, and hidden bosses inside the dropouts front & rear and under the fork crown. 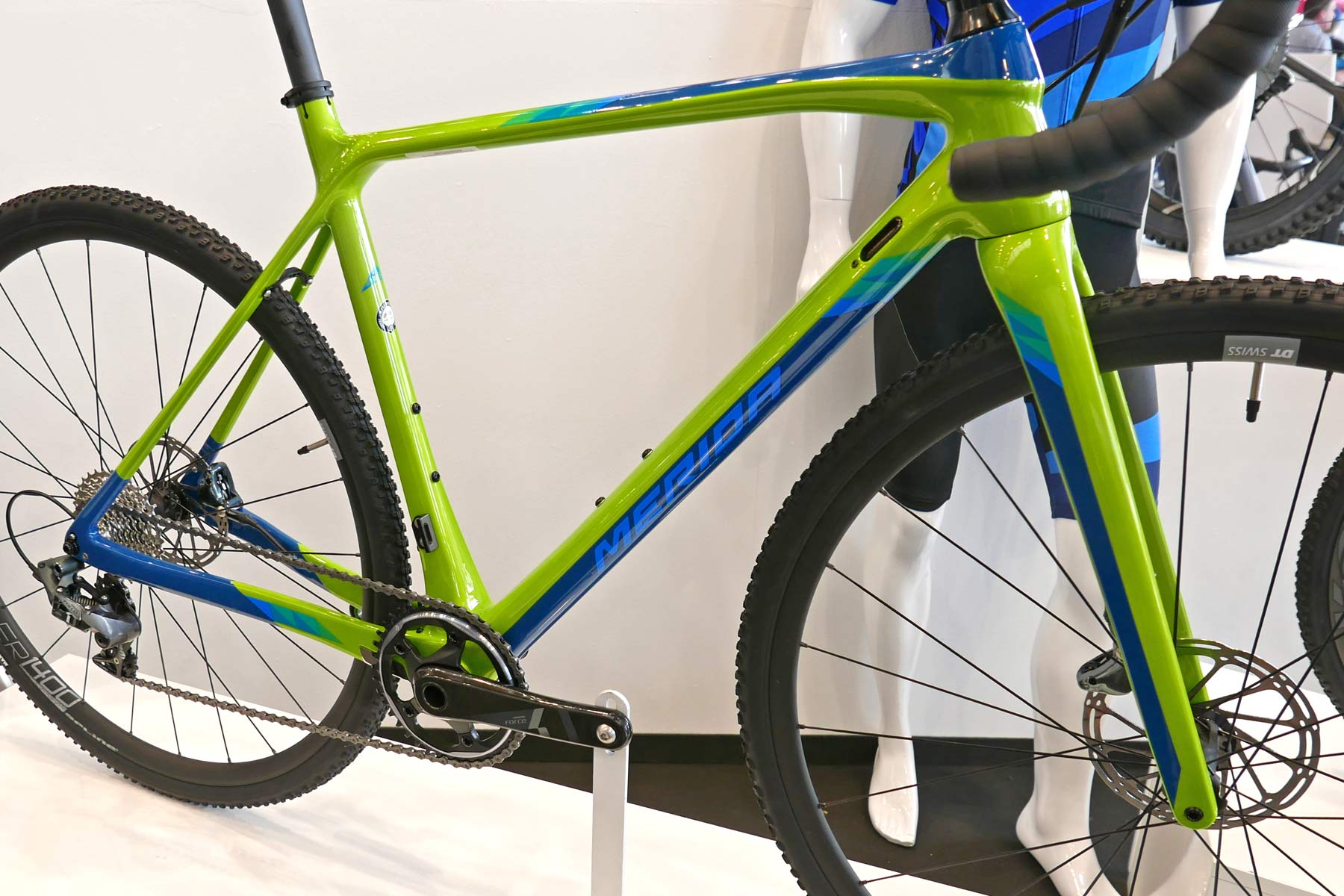 CF2 carbon frame weight is said to come down to 885g (size M), plus another 402g for the fork. The Lite alloy frame goes up to 1622g for the M frame, but shares the same full carbon, tapered steerer fork. 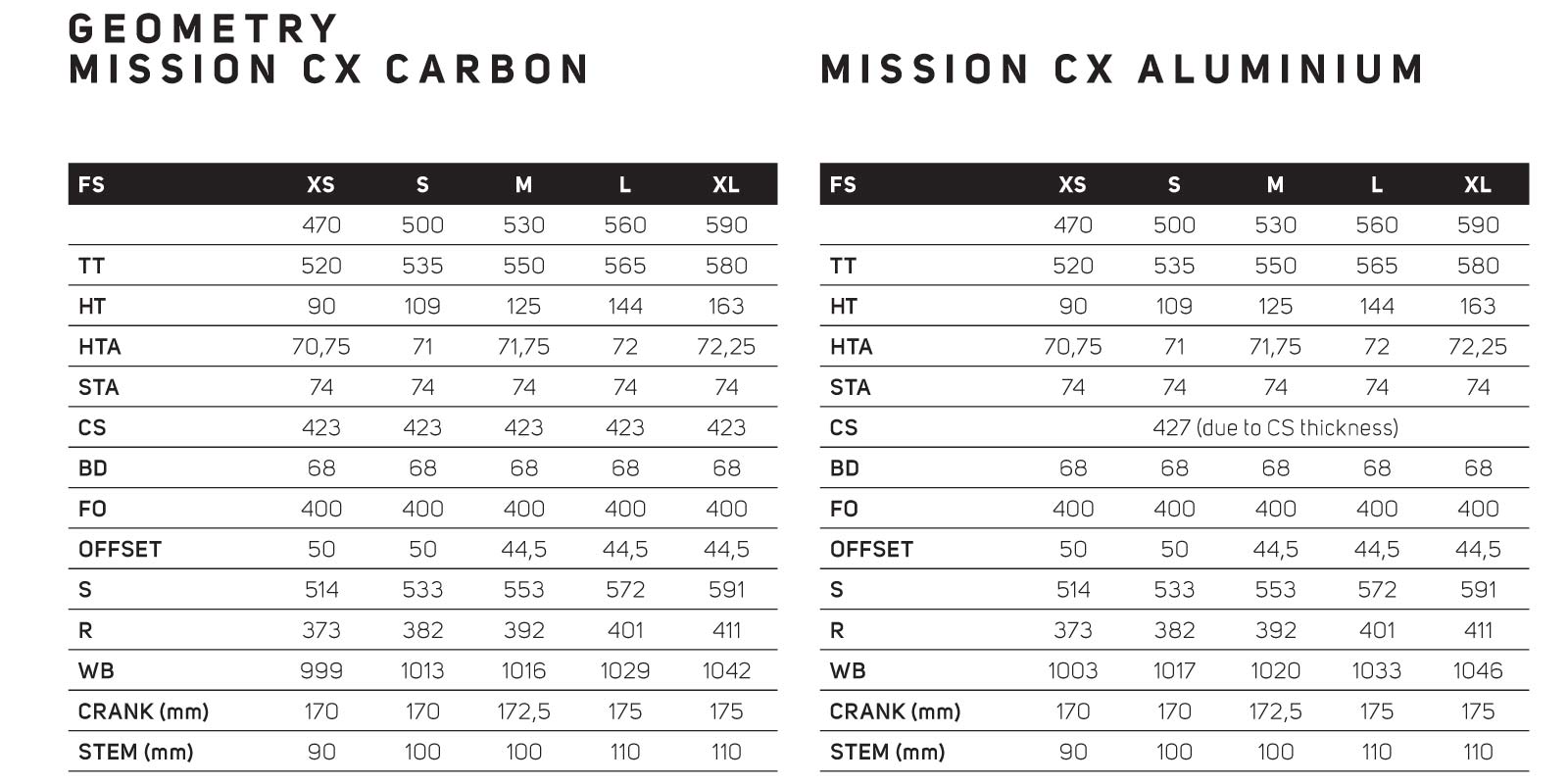 Looking at the changes to the carbon bike geometry, the differences are subtle but designed to speed the bike though technical cross race courses. The new Mission CX essentially has modern trail bike updates. Framesets get longer reach, slightly slacker head and seat angles, while also getting slightly shorter stack heights thanks to shorter headtubes. In fact the biggest geometry improvements come to the smaller XS & S which now get their own size specific fork offset (up 5.5mm to 50mm), to allow for more appropriately scaled headtube angles, frame stacks, and overall wheelbase figures.

Merida stuck with the same quick 423mm chainstays, while adding a precious few extra mm of muddy tire clearance around the bottom bracket thanks to revised chainstay shaping. The alloy bikes get almost all the same figure, just with an extra 4mm longer rear end to accommodate the thicker alloy of the chainstay yoke. 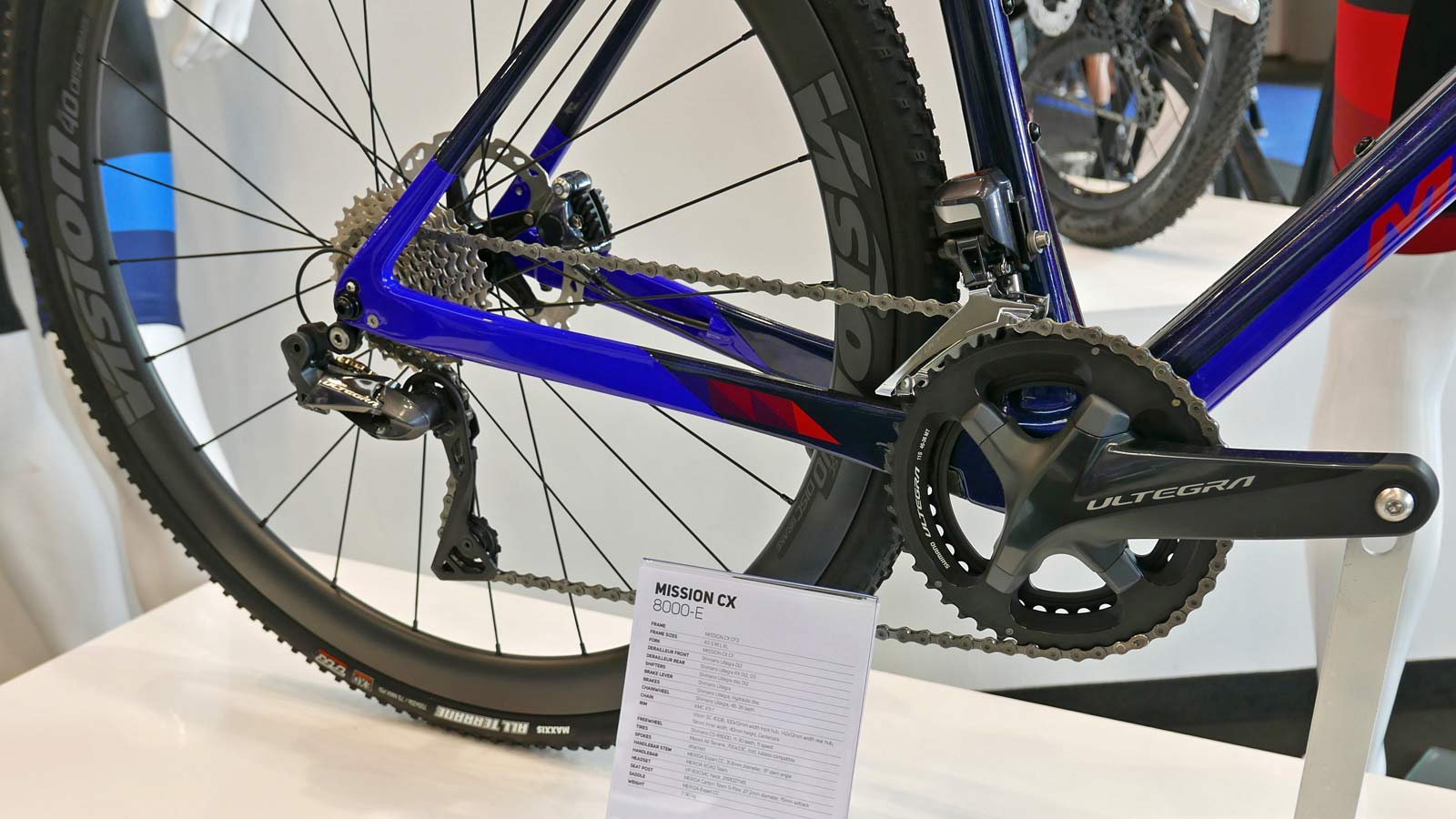 The Mission CX will be available in a number of different carbon builds depending on the market. The top level 5300€ Mission CX 8000-E gets a full Shimano Ultegra Di2 cross double group including the new clutched Ultegra RX rear derailleur, and a set of carbon Vision SC 40DB wheels with a 7.9kg claimed weight. 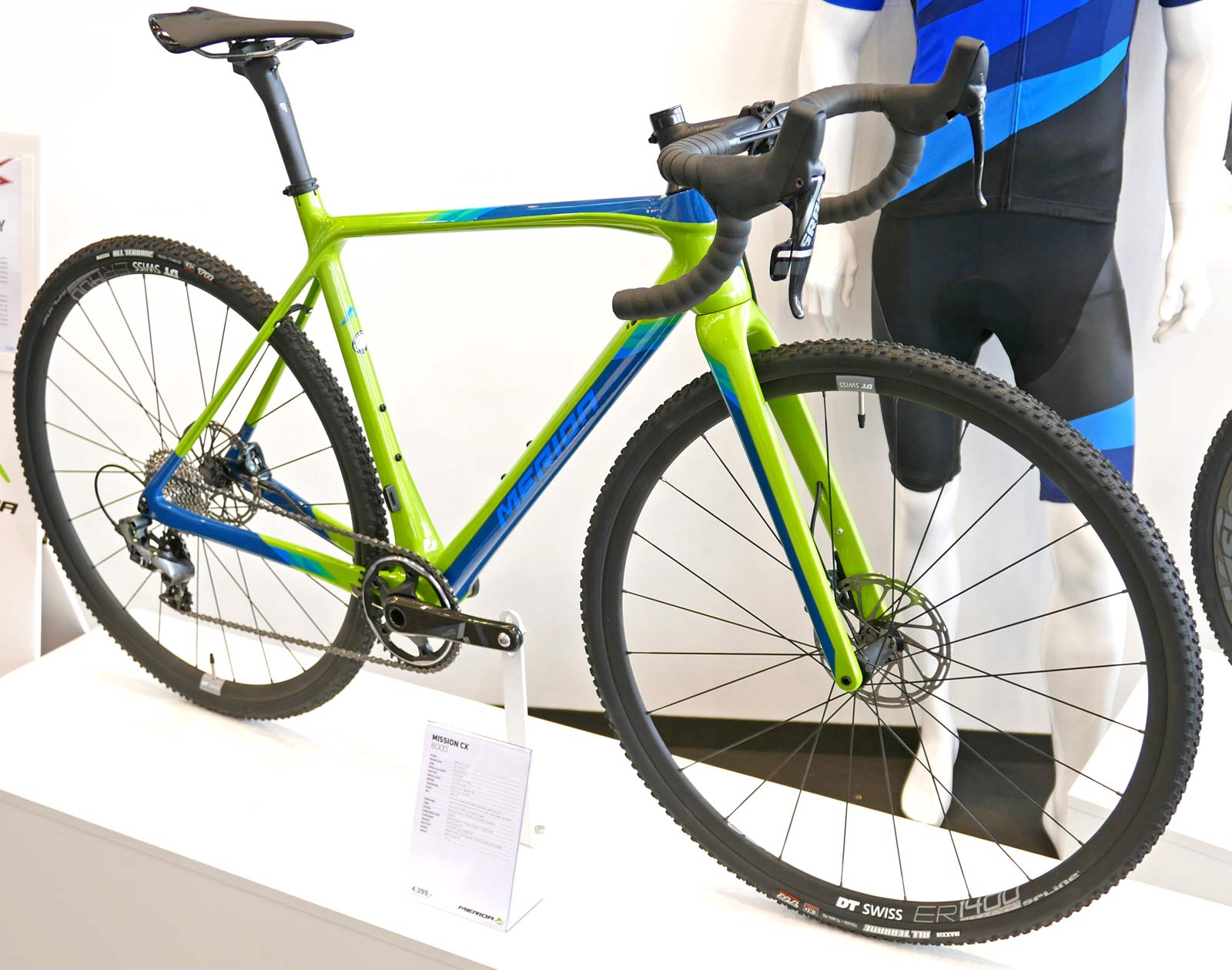 The Mission CX 8000 shares the same frame but opts for a SRAM Force 1x build to deliver a lighter 7.7kg build at a more affordable 4400€ pricepoint with alloy DT Swiss ER1400 wheels.

The Mission CX 7000 again shares the same frame, but with a mechanical Ultegra DX 2x build. And the Mission CX 5000 opts for a Apex 1 single ring budget build with a carbon frameset. 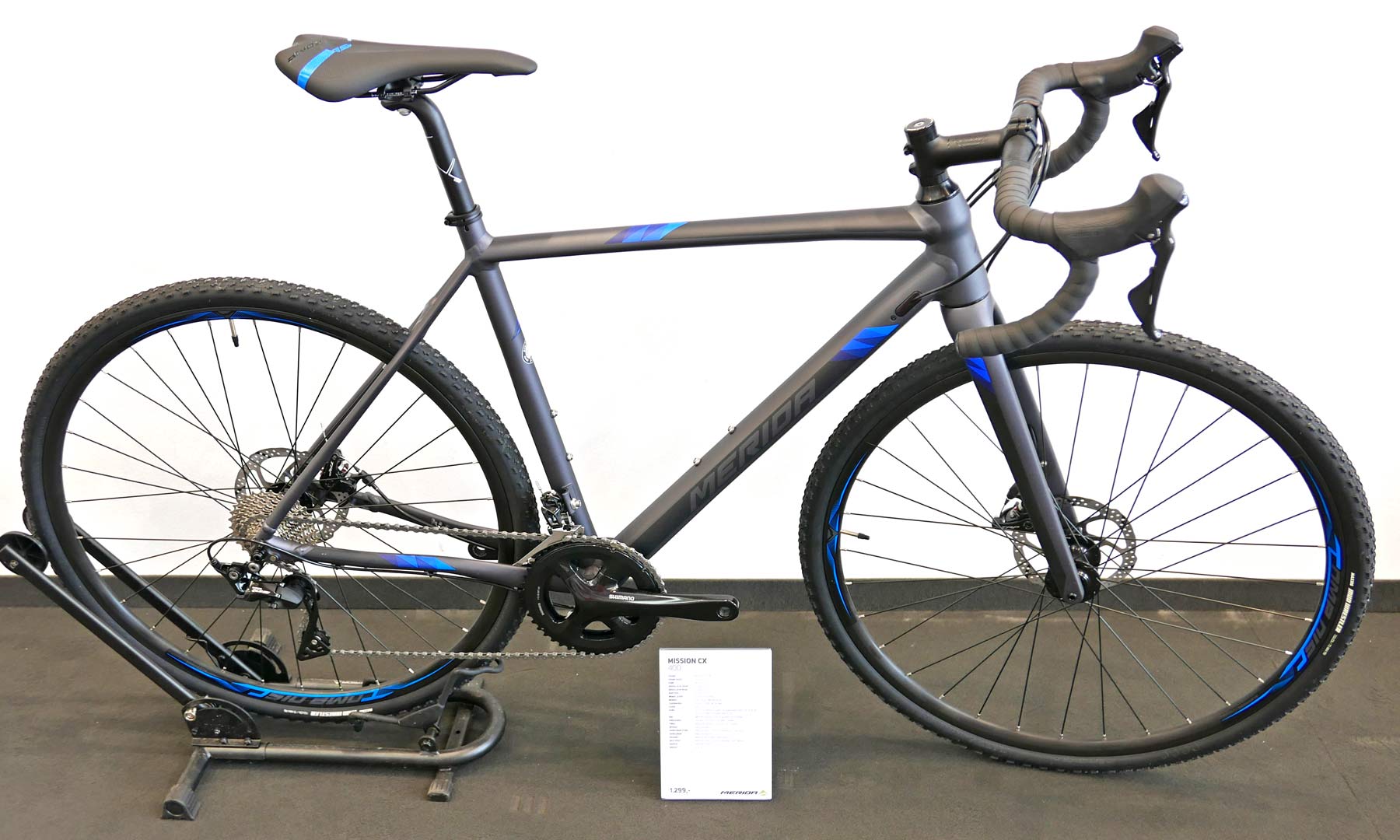 On the alloy side, there are several build options. A Mission CX 400 gets everyday usability with a Shimano cross double 105 for just 1300€. 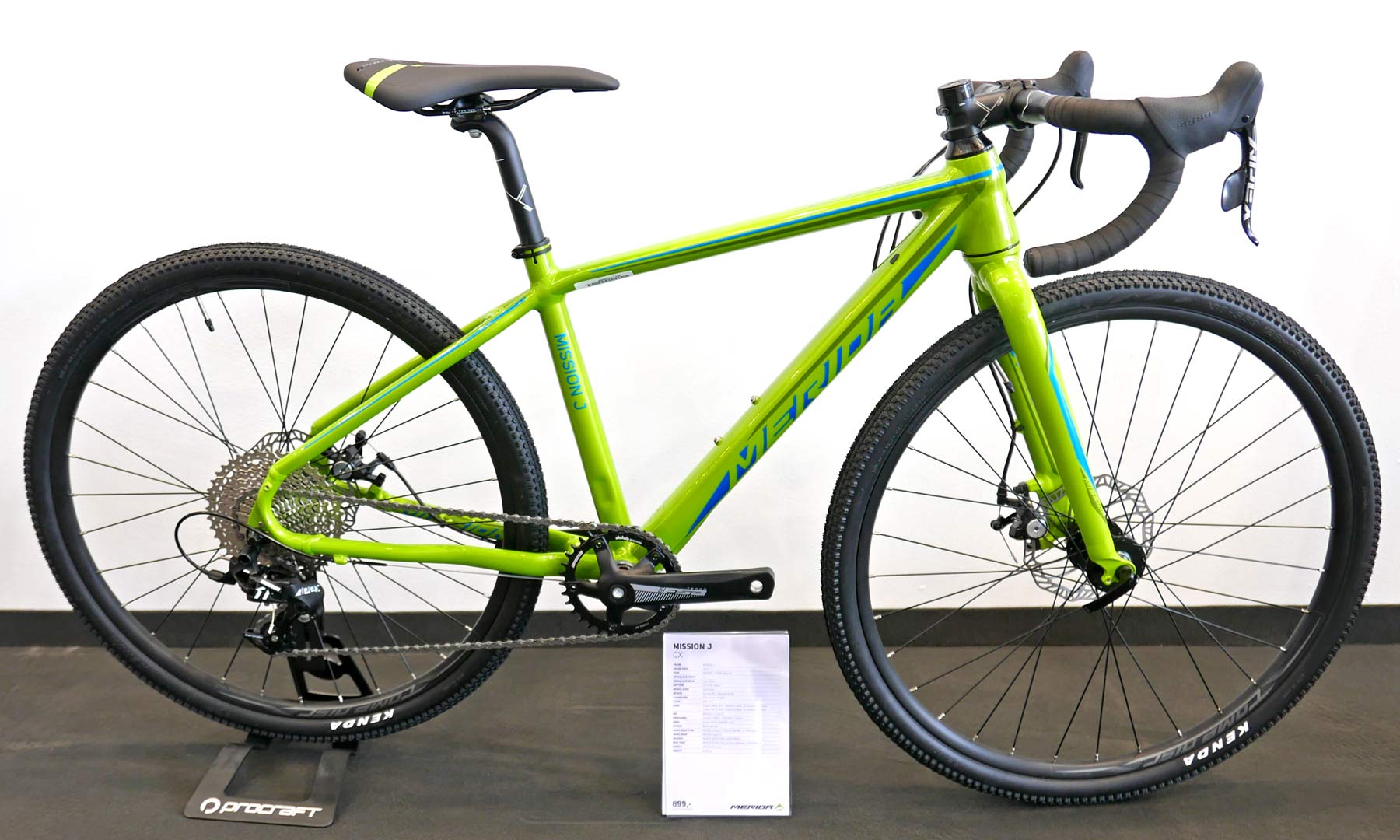 And there is even a 26″ wheeled Mission CX J for kids that sells for just 900€ with a SRAM Apex 1 groupset. 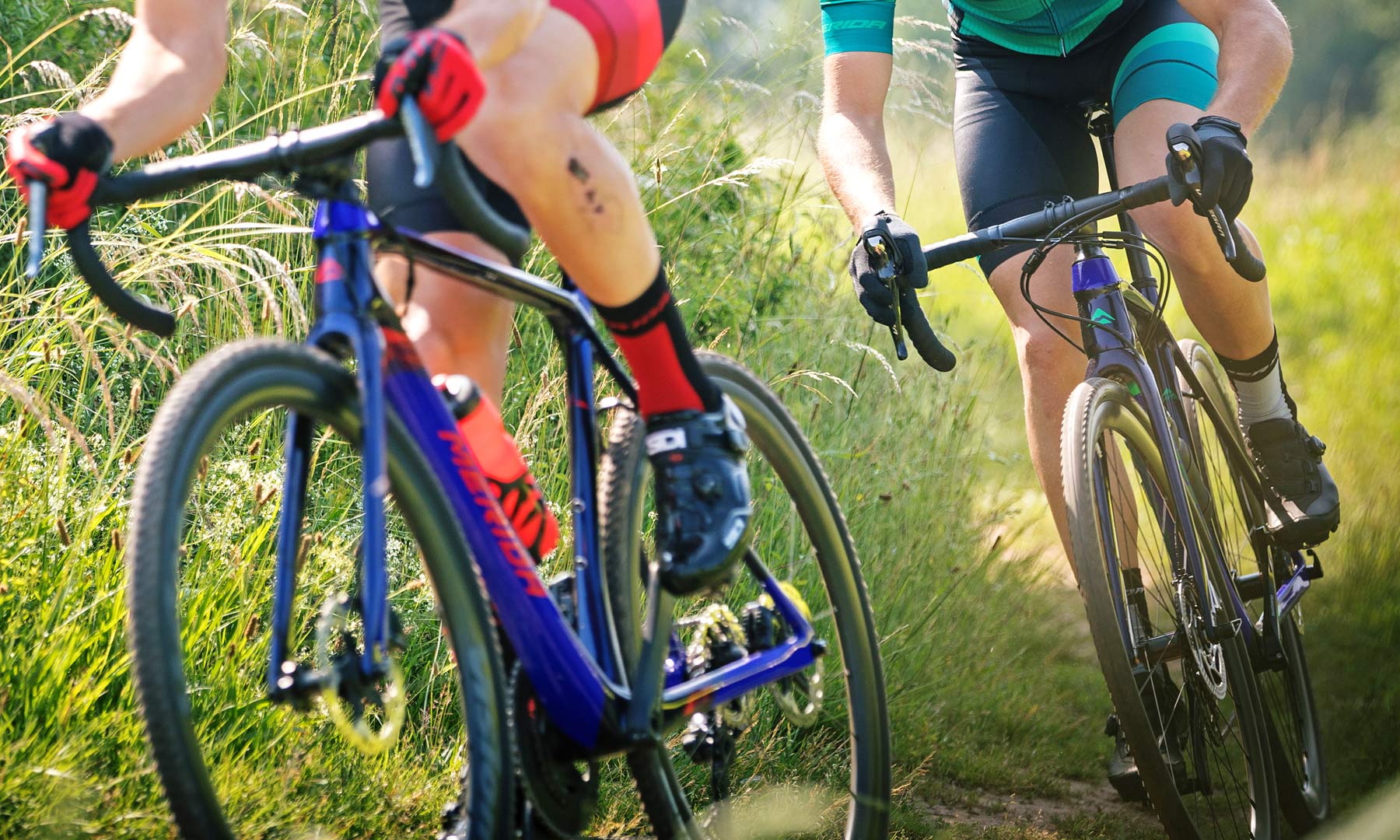 All of the new 2019 Merida Mission CX bikes are making their way through distribution channels as we speak. If you live in a cyclocross infatuated country, it is likely that you’ll be able to pick one up from your nearest dealer by the start of August 2018. If not, you might have to wait a bit longer.

So, does this mean Merida are going to be available in North America, or what?