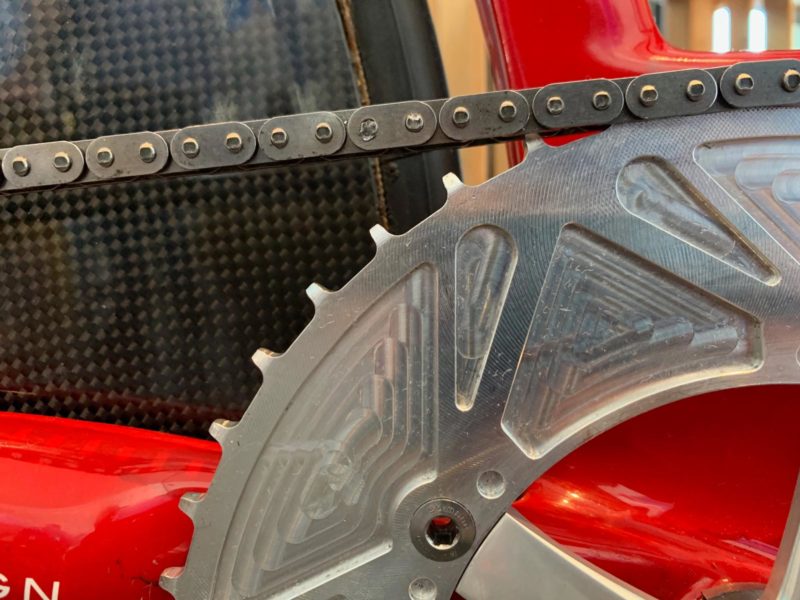 New Motion Labs have introduced a new drivetrain concept that runs half the number of sprocket teeth to allow each tooth to engage two chain rollers at once. The dual-engagement concept is said to increase the chain’s lifespan and increase drivetrain efficiency by up to 1% through reducing energy losses associated with roller movement and inner link articulations. We checked out the new drivetrain concept on a Track bike at Eurobike. 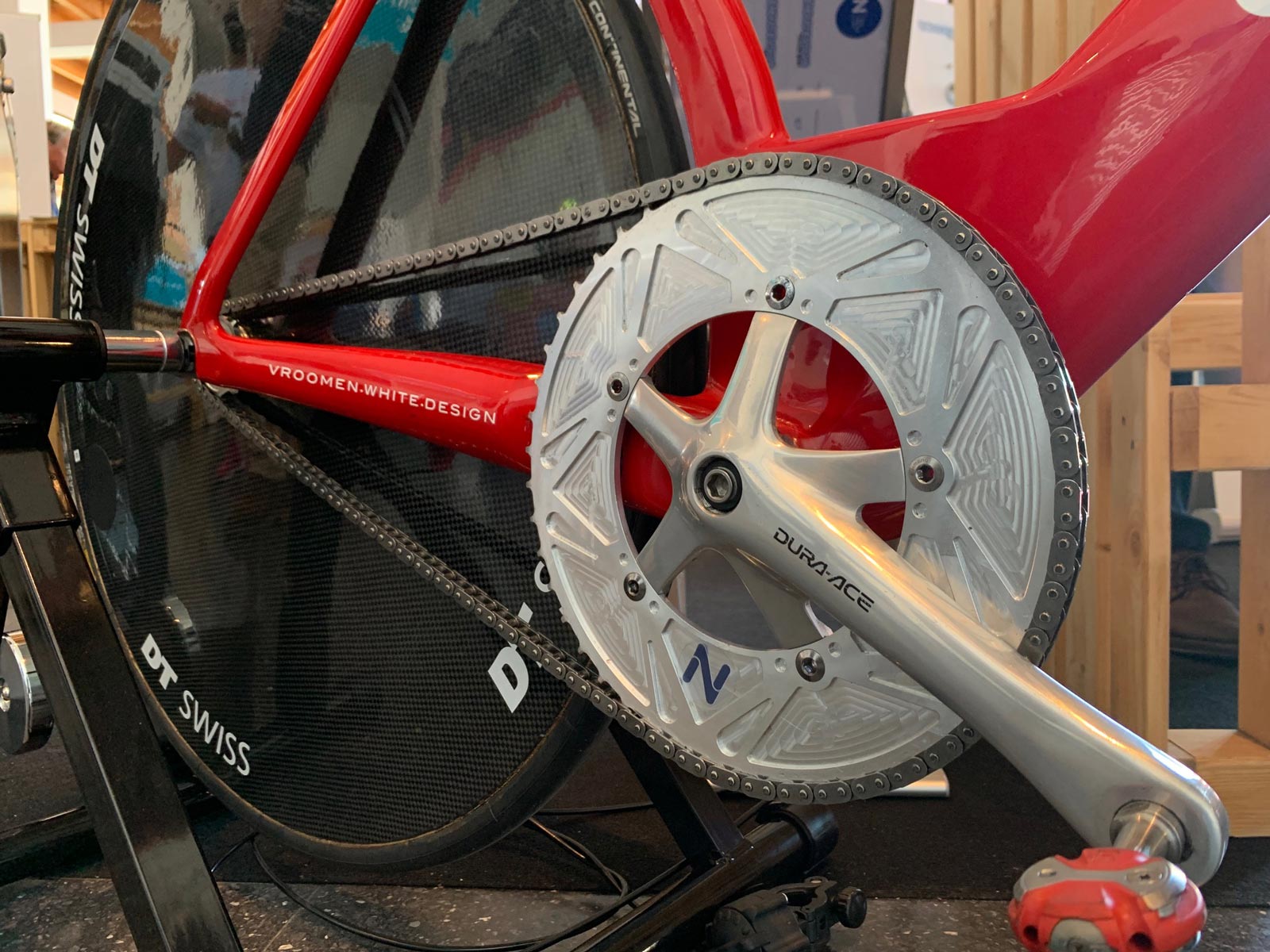 The above video shows how the roller slides through the gulley. It is here where New Motion Labs say there are efficiency gains to be made, as energy is lost through the friction associated with the sliding motion. The sliding also contributes to tooth wear.

The Enduo Evolve drivetrain concept we spotted at EuroBike aims to increase drivetrain efficiency through reducing energy losses associated with friction. Less is more, they say, halving the number of teeth on the sprocket to allow for dual engagement of each tooth, eliminating slack from the system. Importantly, half the number of teeth doesn’t mean a smaller sprocket. It is the spacing of those teeth that is key, with space enough to accommodate two rollers in between consecutive teeth. The result is that each sprocket tooth engages two rollers throughout rotation of the sprocket/chain ring. 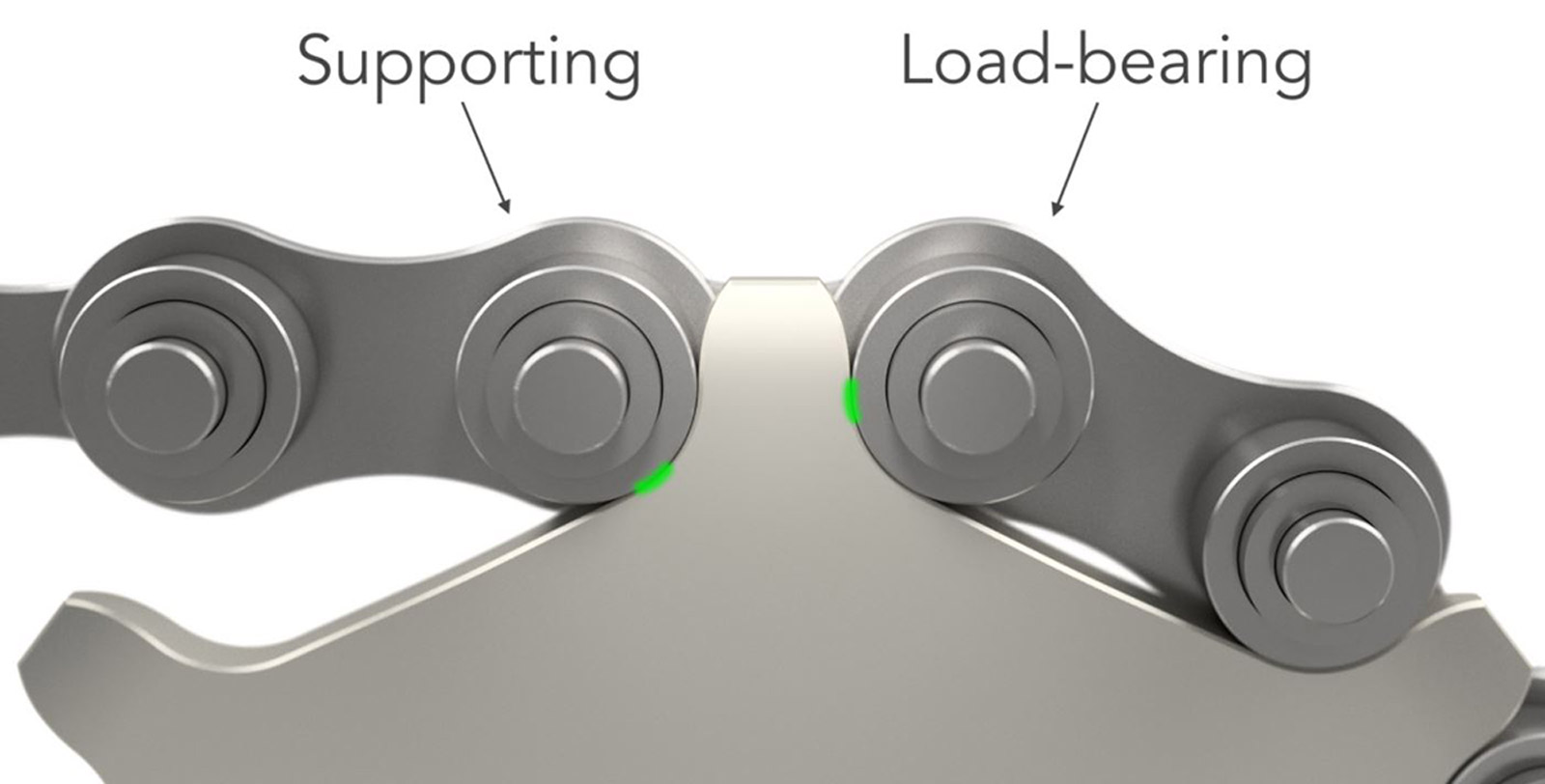 The roller interfacing with the front face of the tooth is the load bearing roller, while the one interfacing with the rear face is the supporting roller. In this system, neither roller is allowed to slide through the gulley as it is locked into place. New Motion Labs say this reduces relative movement of each roller, reducing energy losses. 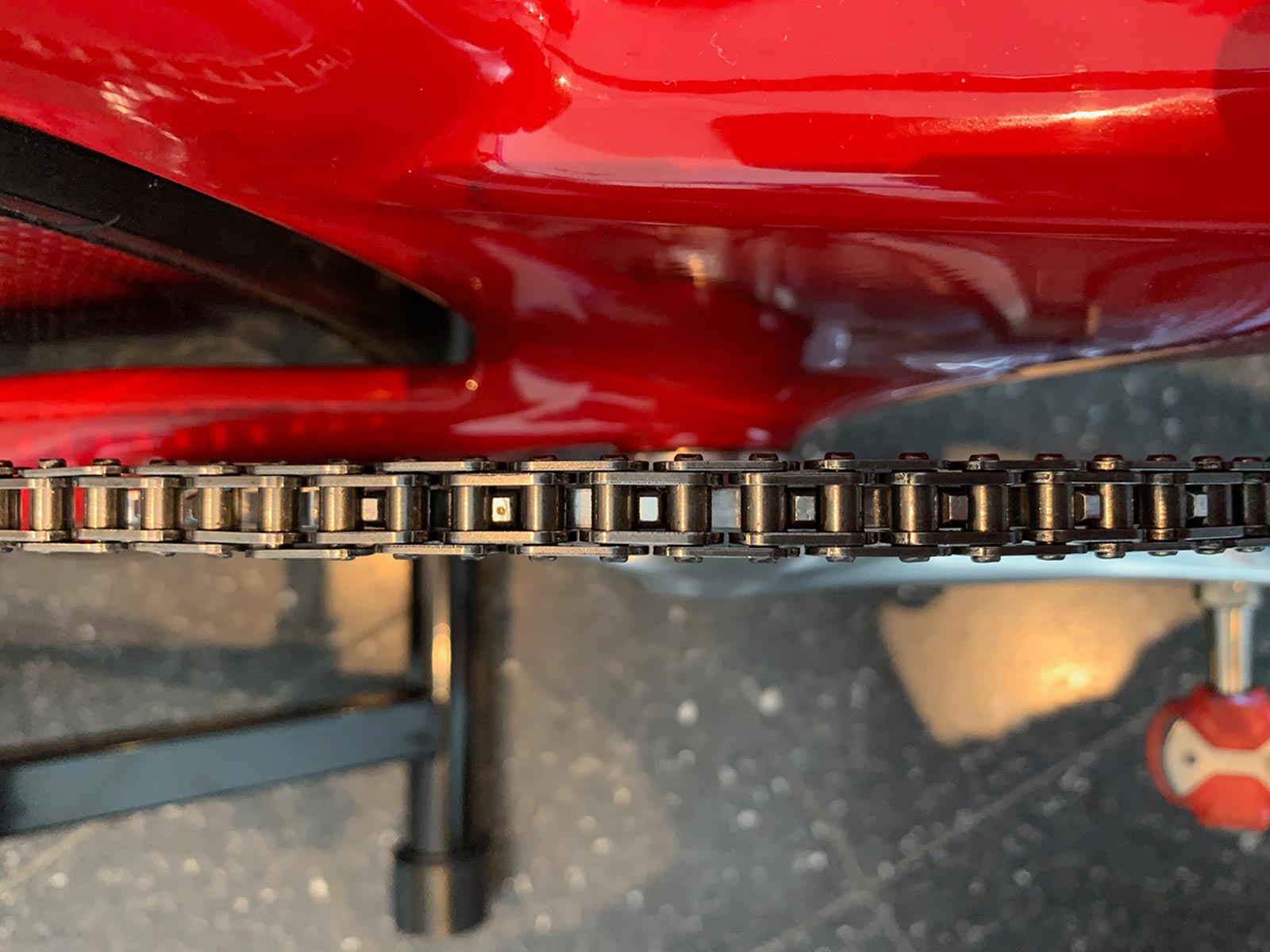 What does this mean for the rider?

New Motion Labs say the Enduo Evolve delivers up to 10W gain at 1000W; here’s what that could mean for time savings on the track

Time savings on the track, and enhanced drivetrain longevity on cargo bikes. 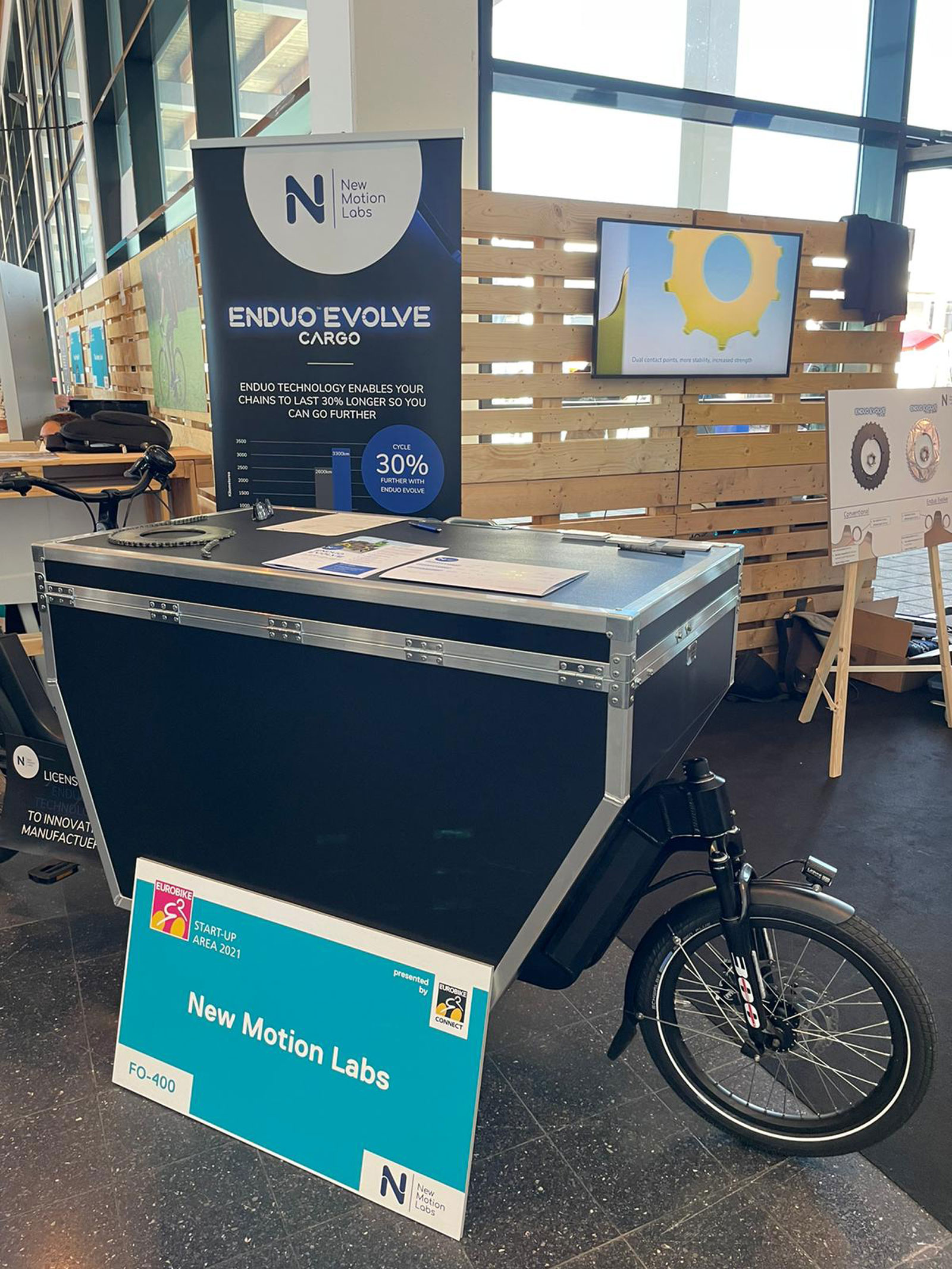 The New Motion Labs Enduo Evolve retrofits to normal hubs and cranks. It will be available in two models; one with a normal chain and one with the industrial chain pictured on the Track bike.

The Enduo Evolve Cargo setup is priced at €149.99, which gets you one chainring, one sprocket, a chain and some drivetrain lube. Pricing for the Enduo Evolve Track setup is not yet available, but it seems you can register with New Motion Labs for pre-orders now.

What goes around comes around. This reminds me of my 1950’s cruiser chain and crank set.

Didn’t Shimano have an alternate track chain standard for a while? Smaller links?

I think we should remain highly skeptical. 900 years of continuous chain drive research has pretty well figured out what the most efficient profiles and systems are. (I literally had to study a book of this earlier in my career.) So, yeah, maybe they’ve figured something new out but this flies in the face of what countless works have found.

Are we pretending that skip-tooth chainrings never existed?

isn’t this exactly the opposite of what the British Olympic track team did with their chainrings, which have more teeth to go faster? Science is so confusing.

Team GB went with a 10mm pitch chain in order to reduce the aero drag of their chain rings and increase their stiffness. A smaller chain ring that is other identical to a larger chain ring will deflect less under the same loads. The primary goal for Team GB was not increasing efficiency, although they may have considered efficiency when optimizing chain pitch.

Science is only confusing if you don’t pay attention to the details.

so savings “up to 1%.” That chain also looks much heavier than standard chains.

This style sprocket is used to reduce chain wear. It’s negative for performance.

Half as many links have to articulate… but those links are articulating farther than standard chain and sprocket, thanks to the (more)faceted shape.