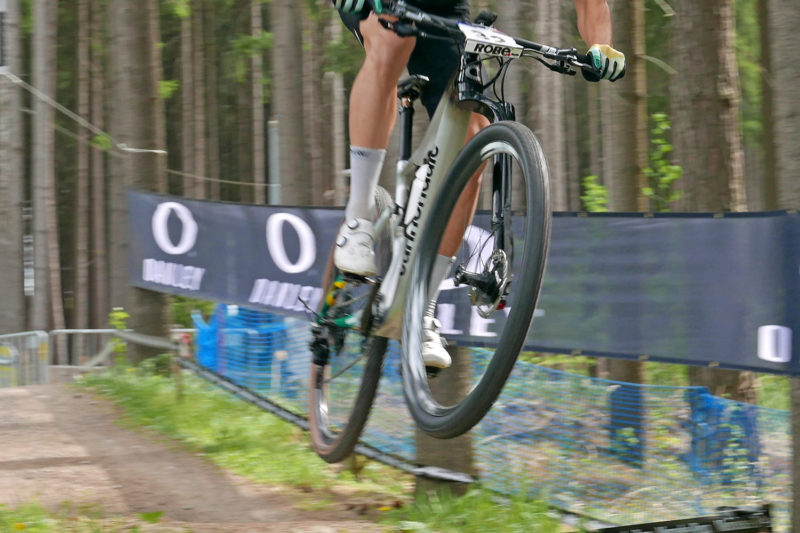 ENVE continues to grow their off-road wheel offerings with a new Cannondale Lefty front hub set to join their standard, but elusive MTB hubs. On the XC World Cup we spotted Cannondale Factory Racing mechanics being especially protective of a bike with a new Enve wheel build that some of their team were testing, but it turns out the team had already shared some photos of the new alloy Enve Lefty mountain bike hub. Could there be a carbon version coming too? 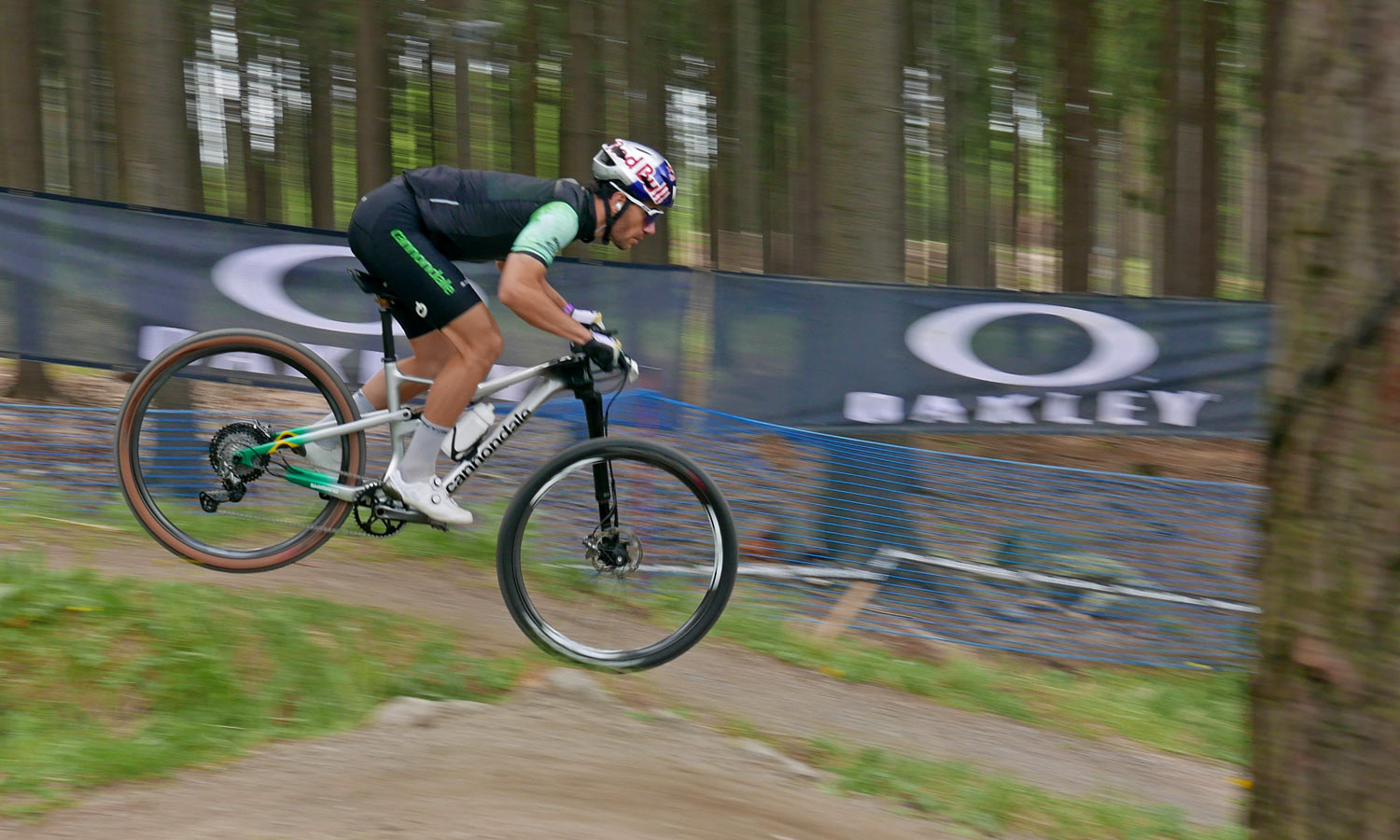 We were clued in first by the mismatched Enve wheelset that Henrique Avancini was testing earlier in the season at Nové Město – both separate tires & rim decals.

In 2019, Enve road hubs added a much more affordable alloy option, even adding centerlock disc brakes for 12mm thru-axles. But as much as they said MTB was in development, no bigger mountain bike axle standard option has yet to be offered except…

The most recent crop of complete M-Series M5 XC & M6 Trail mountain bike wheels have apprrently added the option of Enve Alloy MTB hubs for the same $2550 price as with Industry Nine Hydra hubs. (Not sure why you might pick Enve Alloy over i9 Hydra?)

But Enve doesn’t even have images of the alloy MTB hubs on their website.

Enve even says officially that MTB hubs are not available on their M-Series wheels. But click on the Specs for the M5 & M6 and you’ll see the option for “ENVE Alloy” hubs. I guess that just means they will build these MTB rims to Alloy Road hubs for gravel bikes or anything else that runs non-Boost and a 12mm front thru-axle. Although the 30-40mm wide M6s list the ENVE Alloy hub option only with Boost spacing in its specs. 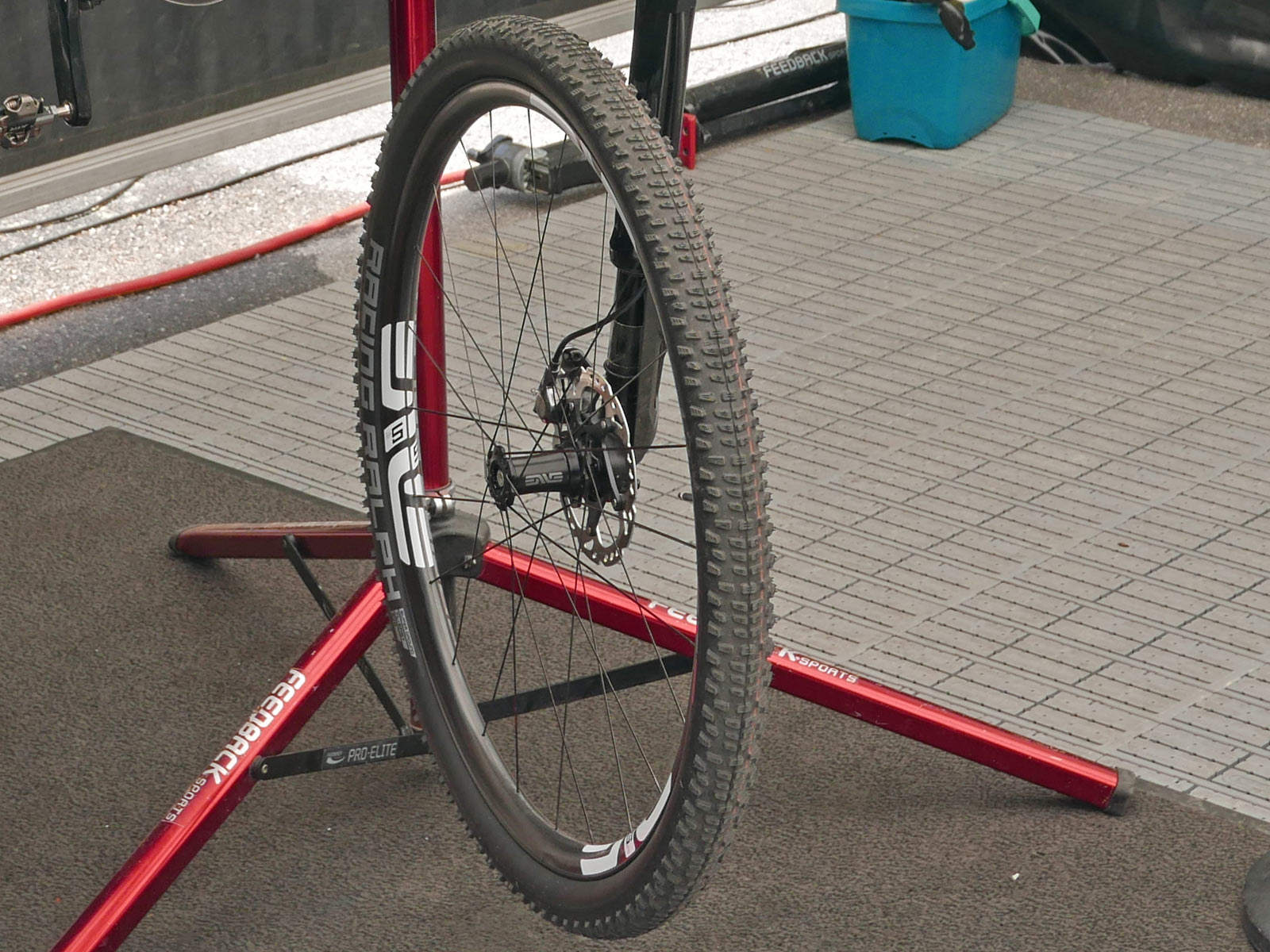 But now we’ve seen them in person. We know Enve mountain bike hubs are for sure in the works, even for one-sided Cannondale Lefty forks.

The Cannondale Factory Racing team XC pros are still balancing racing & training on the new hubs vs. the standard hi-flange alloy Cannondale Lefty hub. Several riders seem to have done some racing on the new hub/wheel at the more tame XC World Cups where they also raced the Scalpel HT hardcore hardtail.

Of course, Cannondale Factory Racing are pros that regularly help develop new products, so it’s no giant surprise to see them on prototypes. Enve says they’ve been testing prototype hubs “for 2 seasons now”. 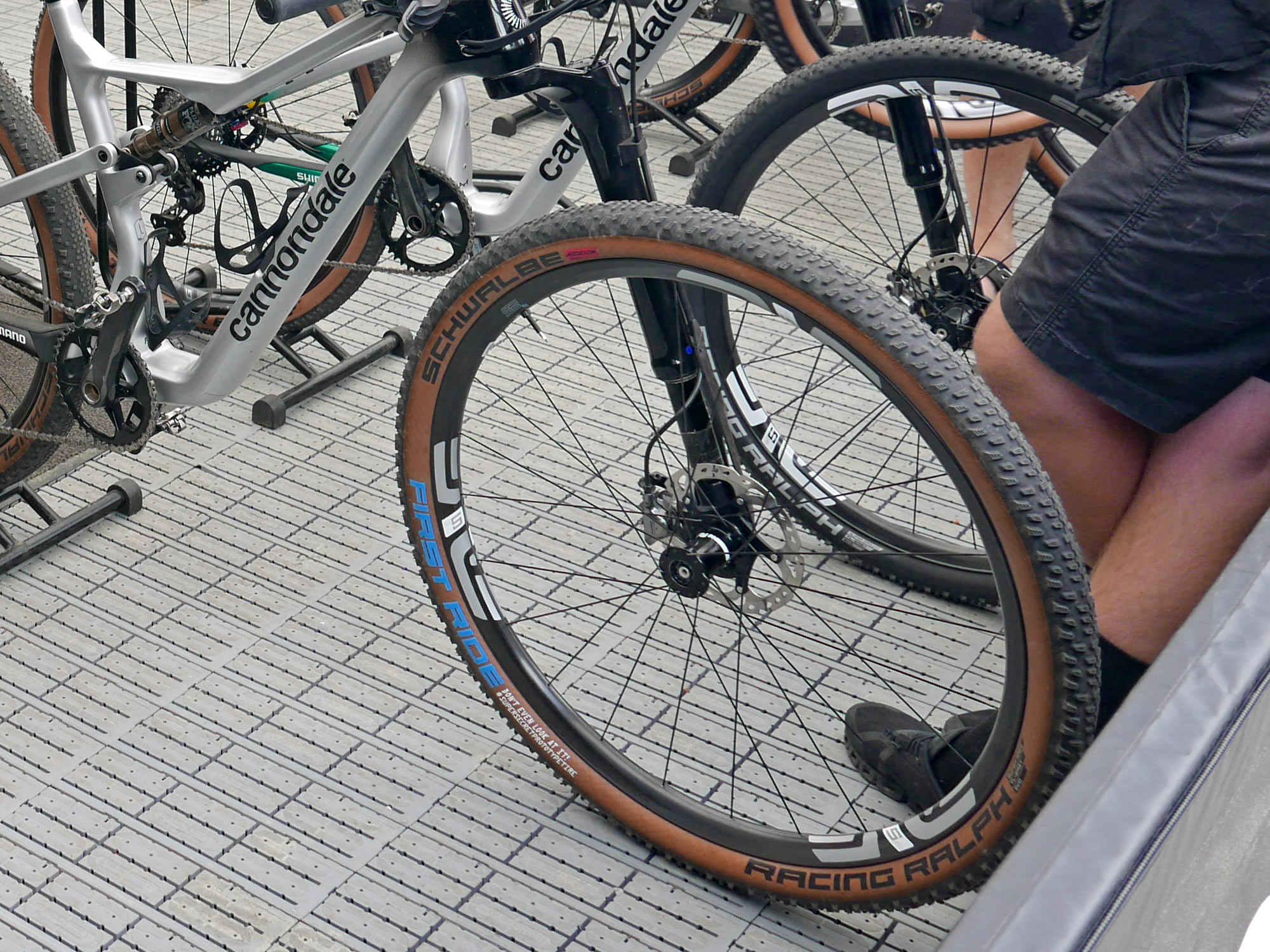 But by the stage in the season where they made it to the more technical Czech course in Nové Město na Moravě and switched to the full suspension Scalpel Hi-Mod, everyone was back to the current wheels.

We did spot Henrique Avancini testing the new hub out on the Czech course, but even by the time the shortened and less technical XCC race started, he was back on the production wheelset…

ENVE MTB hubs… what do we know? 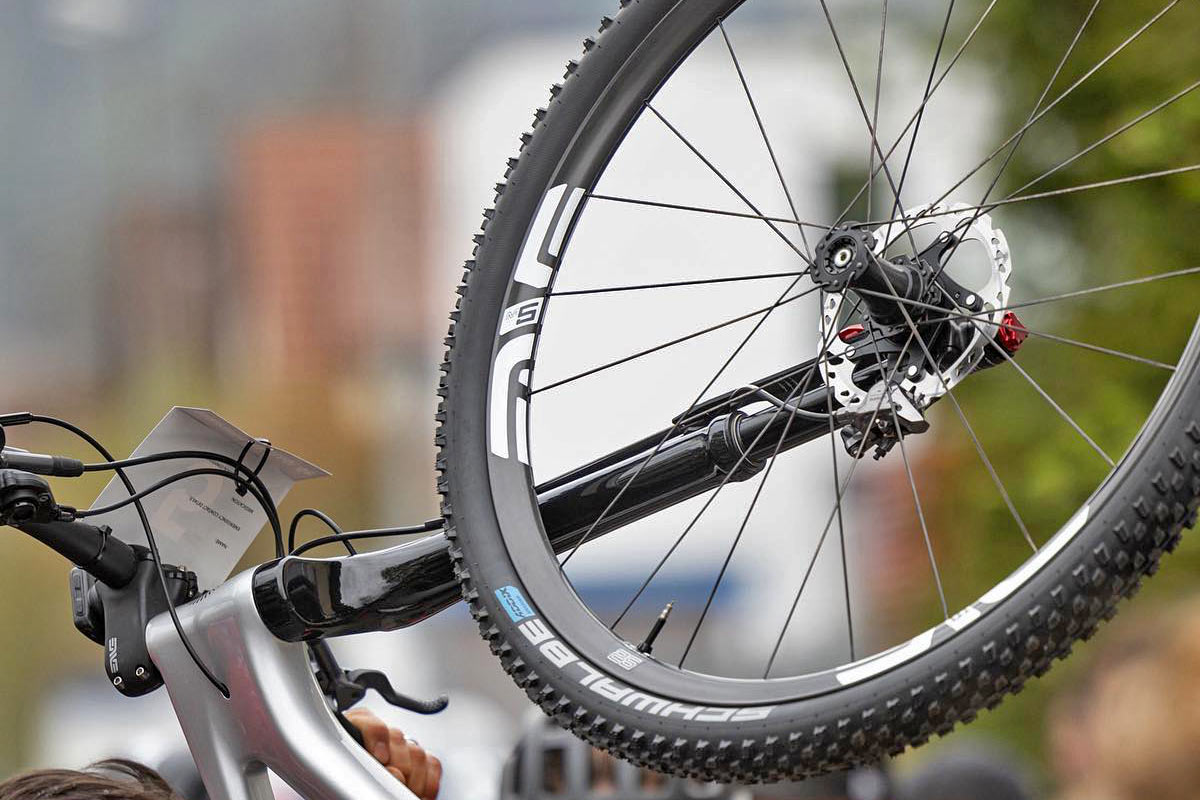 Cannondale Factory Racing let their professional photographer get closer than they let us, so we can dig a bit deeper into the details we can see. The new alloy Lefty hubs share the same semi-paired 24-hole lacing as the alloy road disc wheels.

In fact, without a right leg on this XC race fork, we actually can get a better view of the hub in situ compared to typical spy shots behind a normal set of fork legs. 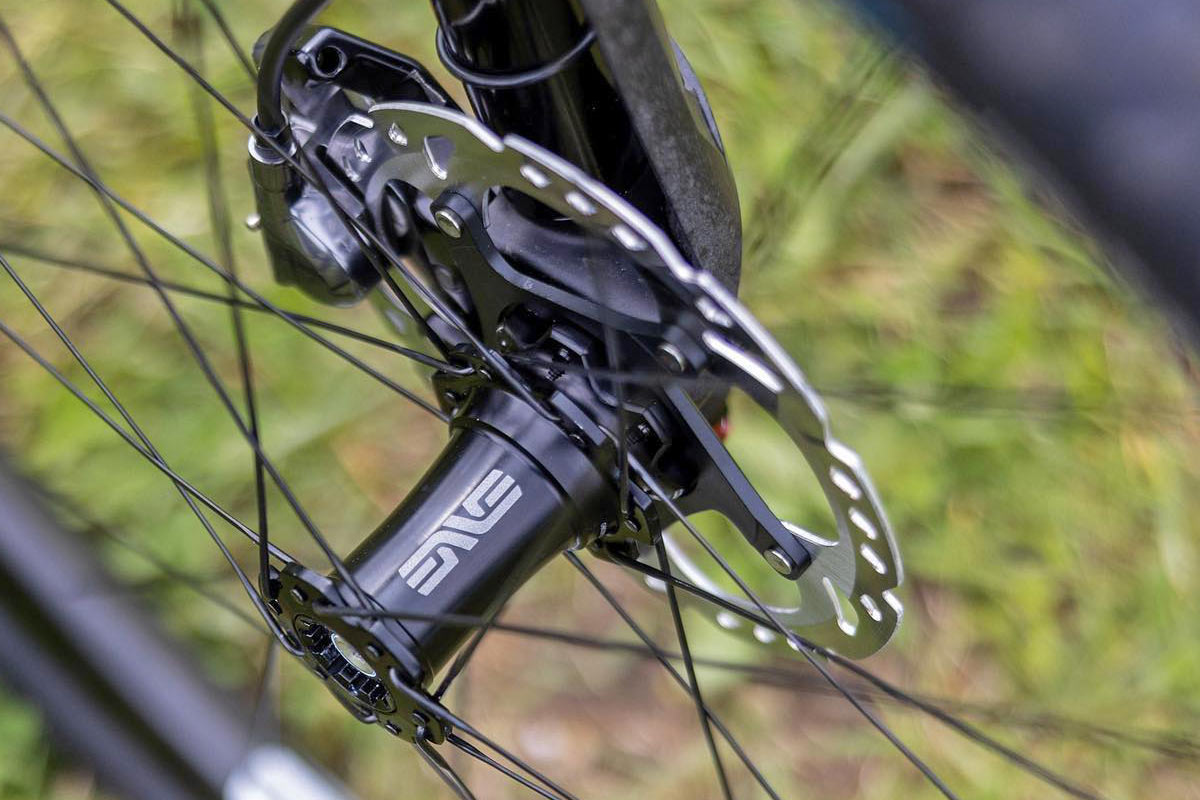 This prototype Enve Alloy MTB hub for the Lefty does opt for a 6-bolt rotor, but we can likely just chalk that up to the compatibility requirements of the oversized, one-sided Lefty hub & axle interface. Looking back at the rear wheel of the CFR team bikes, they were all running centerlock rotors – although we couldn’t confirm any Enve Alloy MTB rear hubs being tested.

The prototype hub for the Lefty does also feature a larger stepped aluminum hub diameter at the non-driveside flange compared to the smoother curves of the current Enve Alloy road disc brake hubs, again likely to compensate for a larger diameter bearing specific to the asymmetric one-sided Lefty loading. 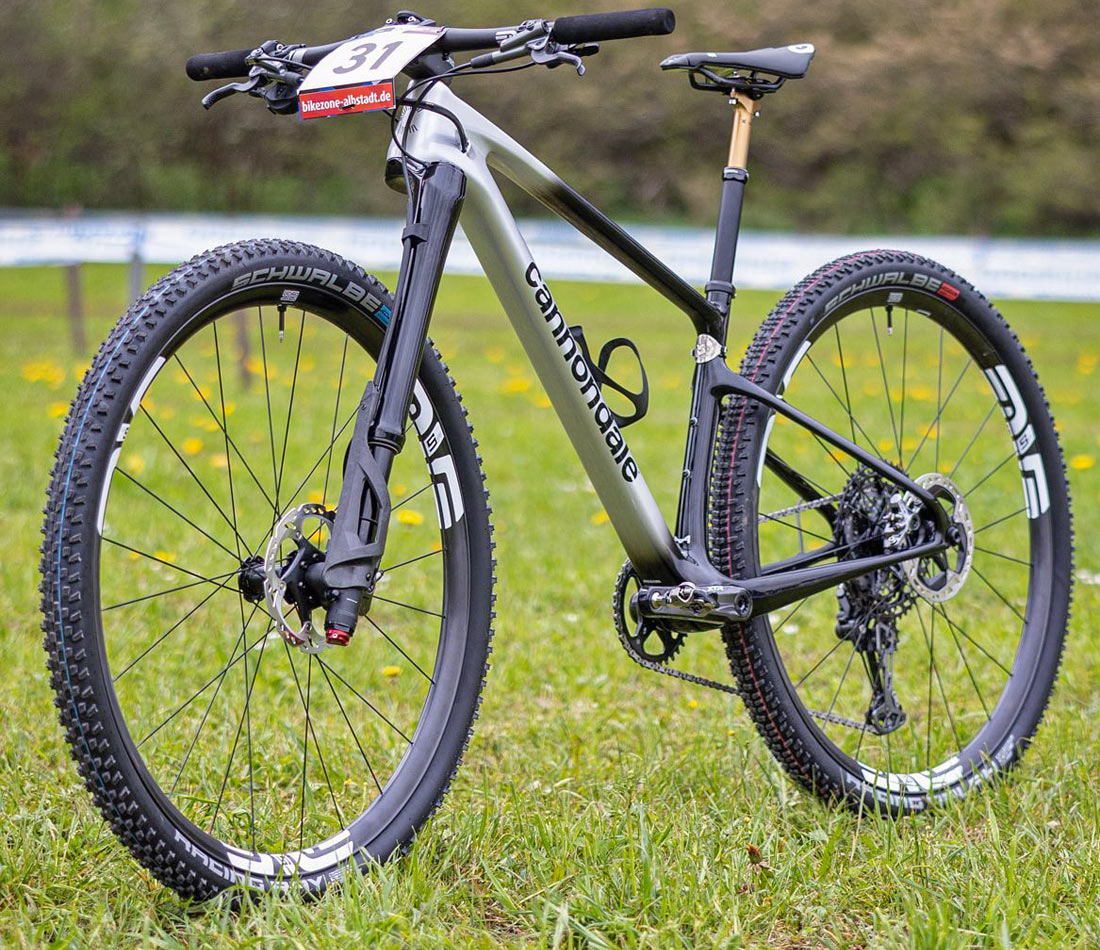 But even a look across the front wheel at the non-disc / driveside flange of this prototype Enve Alloy MTB hubs suggests there is also a stepped-up section to support a larger bearing. That’s not a huge surprise in the move to the larger diameter 15mm thru-axle and wider Boost spacing of MTB hubs, plus higher impact forces a mountain bike is subjected to.

What does Enve have to say… officially, “Are MTB hubs coming? Yes, but they are not available today.”

Now we’ve seen them up close too and know some Enve Alloy MTB hubs really exist. When will we see more of them?

@Andy, that’s simply a limitation of the Lefty hub’s oversized one-sided axle, not necessarily indicative of what ENVE will likely produce for standard MTB axle configurations.