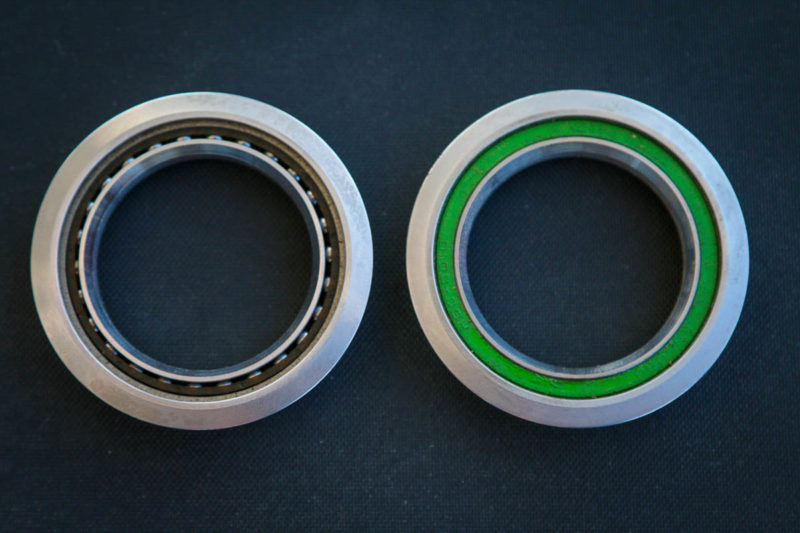 By now, you may have already read about the new Enduro Maxhit headsets. Launched just before Sea Otter started, it appears that the new headsets were just the start of new things to come from Enduro. Now, that same design has been applied to bottom brackets as well which could be very, very good news for bottom bracket durability. 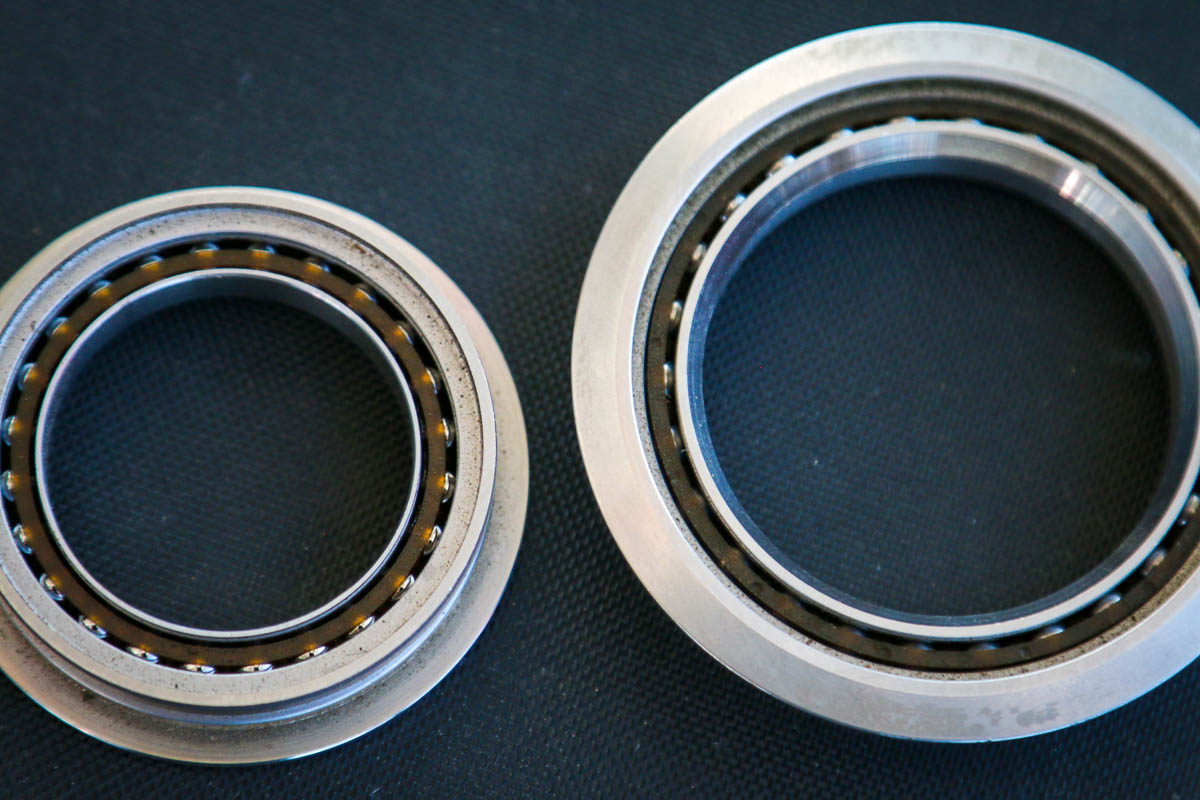 With standard headset and bottom bracket designs, a cartridge bearing is dropped into an aluminum cup. Due to the additional material, this forces manufacturers to use smaller ball bearings which are often less durable. There’s also the chance for that bearing to cup interface to get dirty, worn, and be a source of noise.

The Maxhit design eliminates the outer race of the bearing, instead integrating it into the cup itself. This eliminates extra parts, but it also allows for more space for bigger ball bearings. The result is a headset with double the load capacity, less noise, and a wider adjustment range. 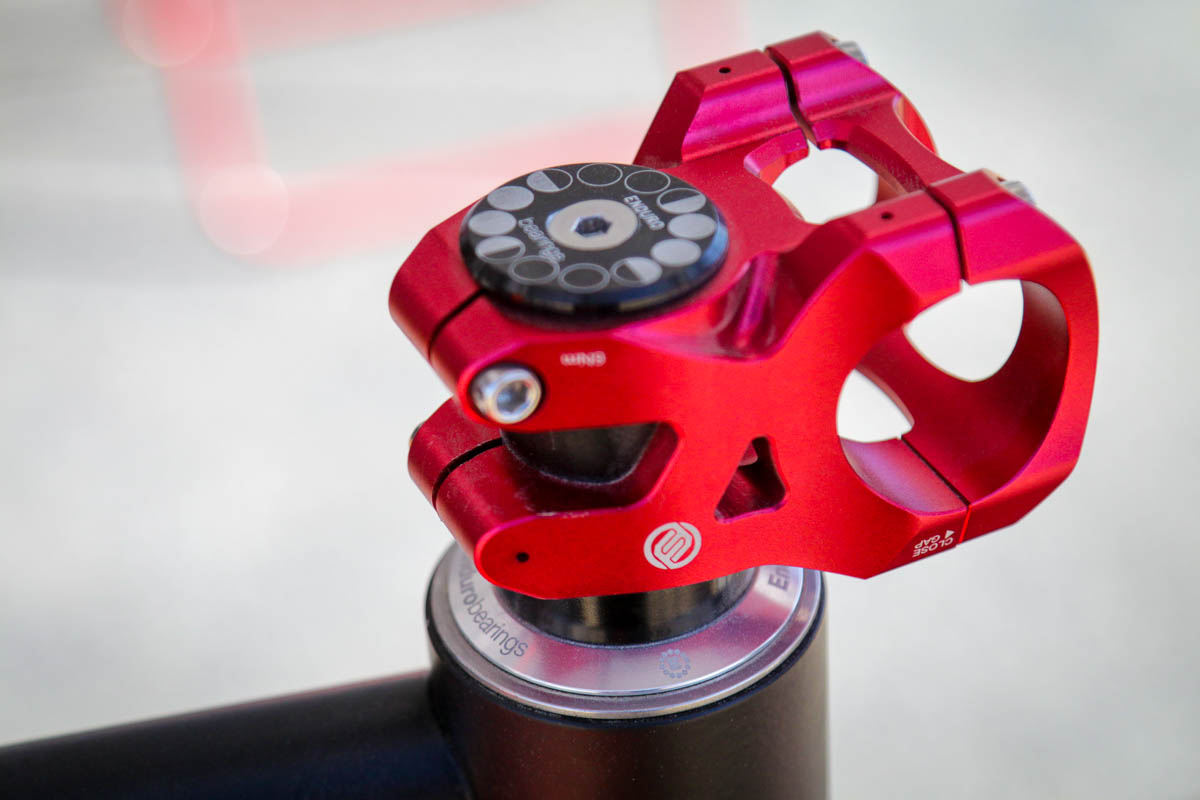 Of course, it’s not easy to manufacture, with the Enduro Maxhit headset using a 440c stainless steel for the inner and outer races (which only add about 12g compared to a standard headset design with aluminum cups). That’s part of how Enduro can offer a lifetime warranty on the headsets—including a warranty against corrosion. That’s important since you can’t just replace the bearing in these headsets, since the bearing is the headset.

For now, the use of 440c stainless means the zero stack headset cups will only come in a silver color. Enduro says there’s a possibility to use a special heat treatment process that will make them black, but that won’t be available for now. The upper headset cap itself will be offered in silver or black though, with that being the most visible part of the headset. 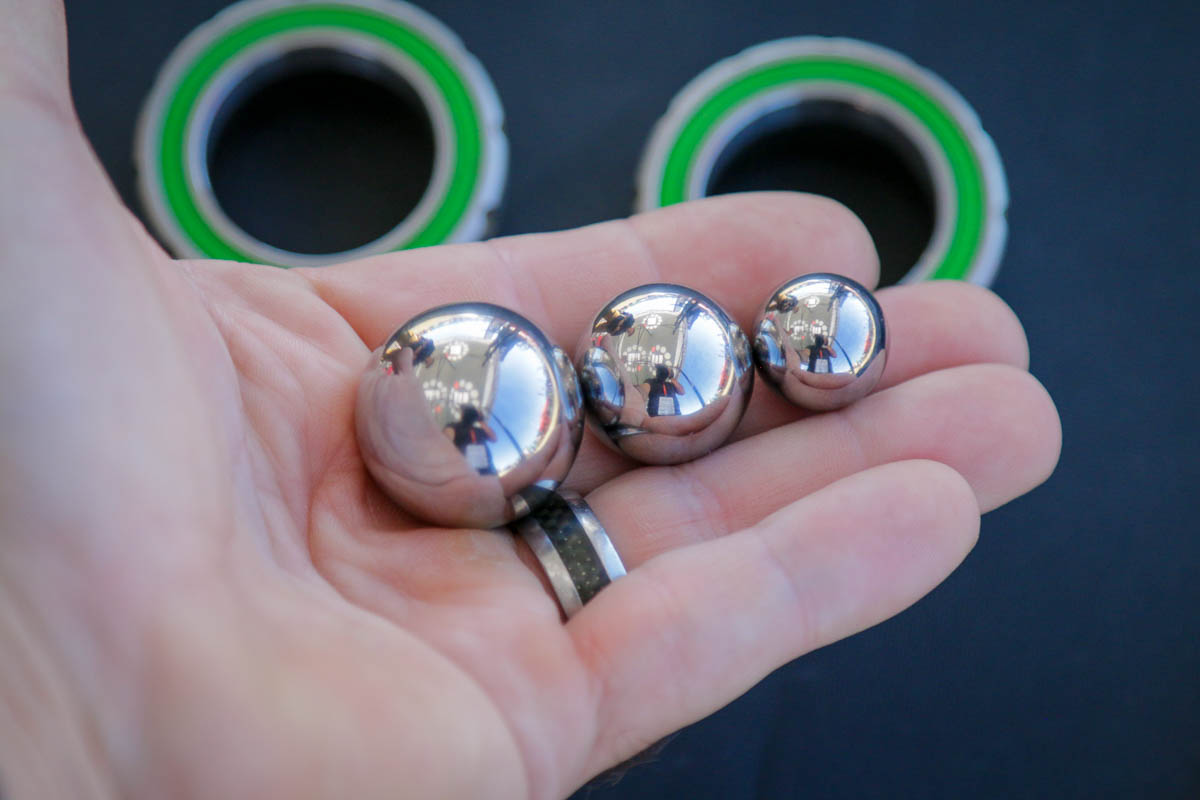 Relatively, the ball on the left would represent the new Maxhit bottom bracket, the middle a standard Enduro bottom with XD15 bearings, followed by the industry standard.

These use the same concept—the bottom bracket shell becomes the outer race of the bearing, and larger balls are able to be used. How much bigger? The new balls have 15x the mass of a standard bottom bracket ball bearing with 5mm balls used in place of 2.3mm balls. That’s hard to appreciate at a 1:1 scale, but when supersized, the image above shows the relative difference in size. 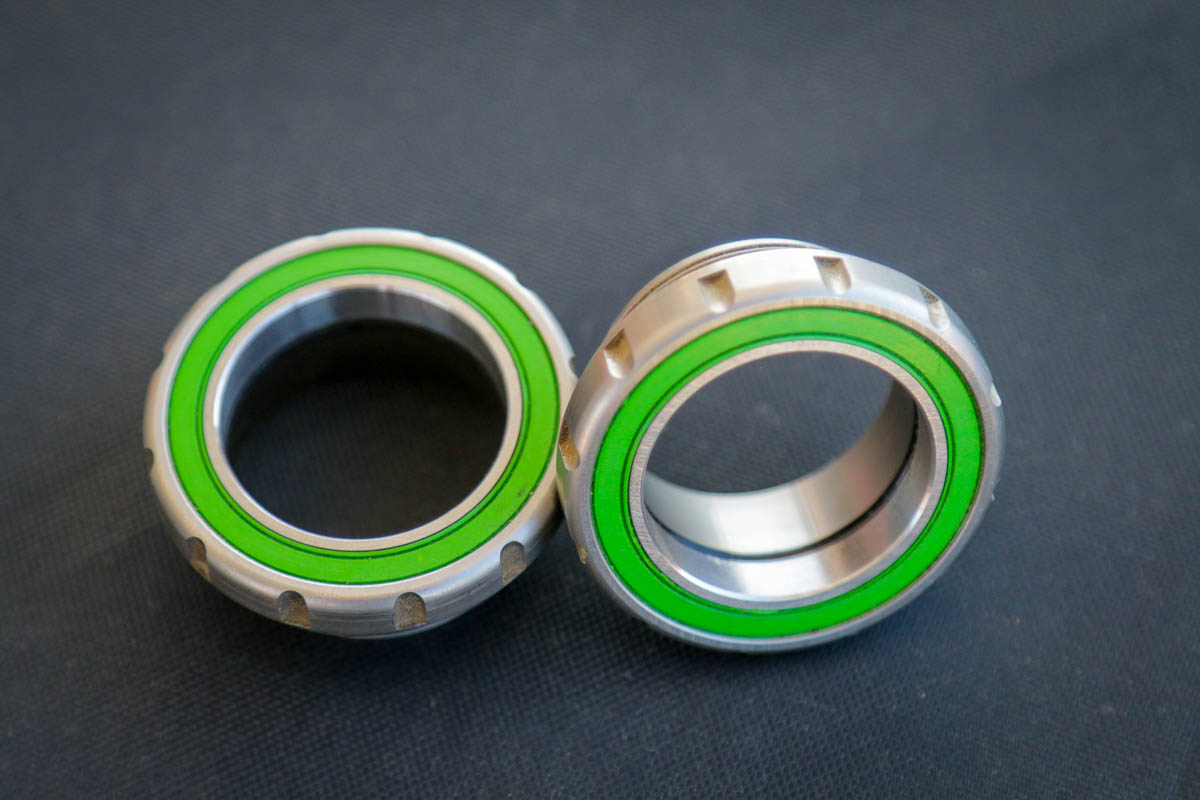 Why does that matter? When companies started introducing cranksets with 30mm spindles, those larger spindles often meant smaller bearings had to be used to fit existing bottom bracket standards. That seems particularly true with BSA30 bottom brackets which are notorious for their less than stellar durability.

Now, Enduro is offering four new bottom bracket options that should do the same thing as the Maxhit headets. You’ll get improved durability, increased adjustment range, and less noise from eliminated potential creaks from the bearings in cups. 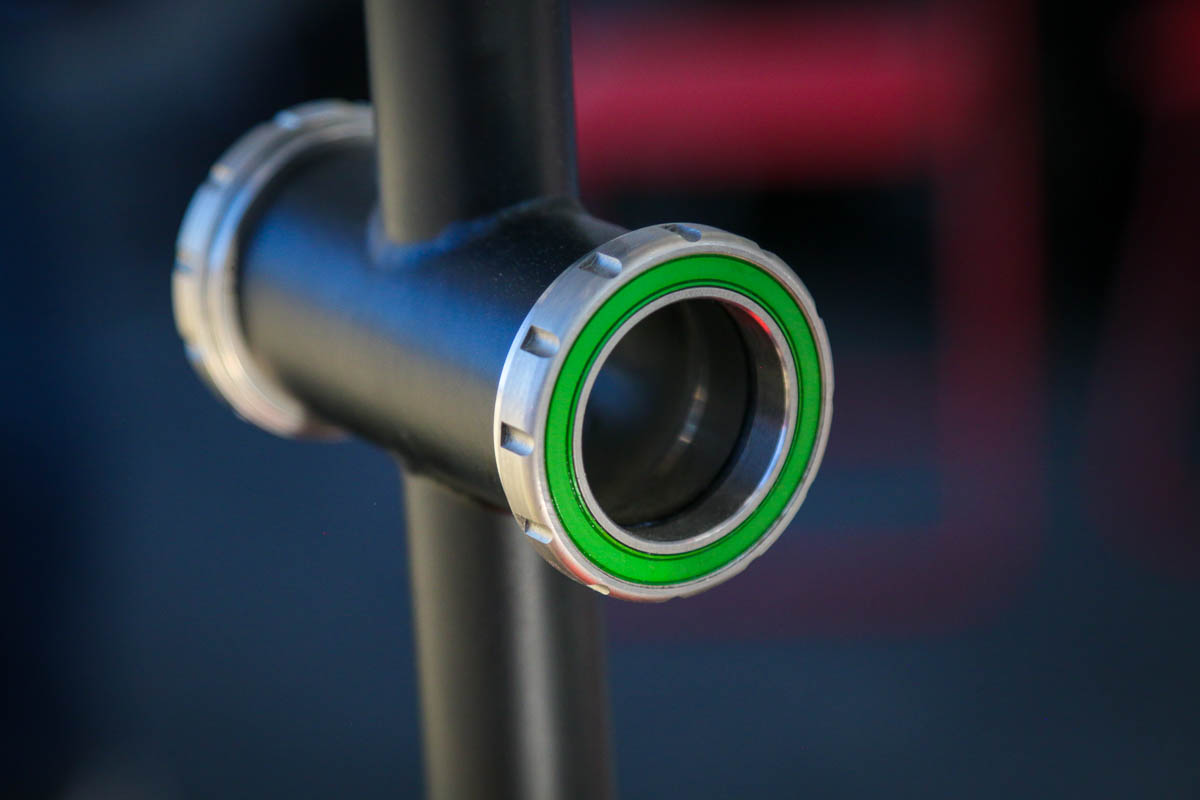 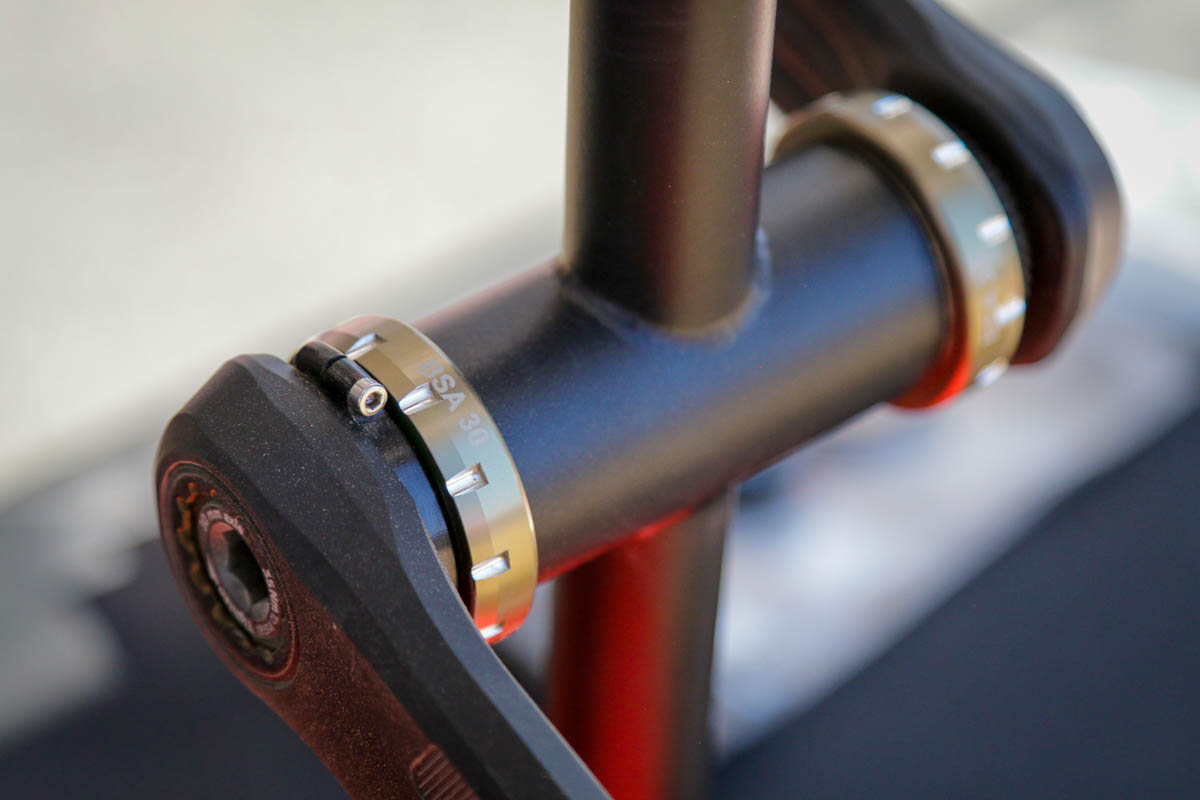 The Maxhit bottom brackets aren’t available just yet, but when they are, they’ll be offered in a BSA30, BSA DUB, BSA Shimano, and BB86/92 fitments. All will use 440c stainless steel XD-15 angular contact bearings and there will also be an inner seal on the spindle itself. That means there’s no need for a center sleeve. No word on pricing or availability yet. 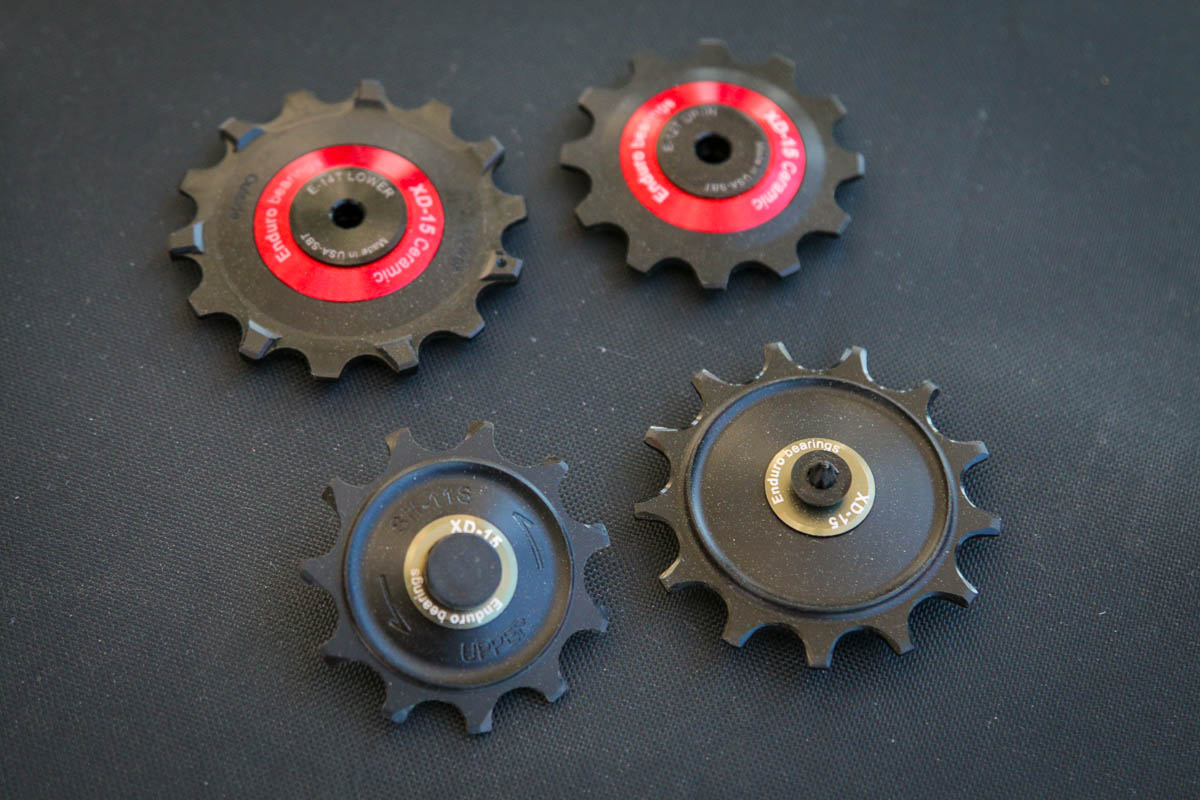 Adding to their derailleur pulley range, Enduro has introduced a new version for Shimano GRX rear derailleurs. Enduro sticks with the stock pulley wheel size as Shimano and SRAM derailleurs since their testing has shown that larger pulley wheels increase drivetrain friction when cross-chained.

So what makes Enduro pulleys better than stock then? They claim that their aluminum clamshell design with a Teflon-impregnated Delrin pulley results in a stiffer pulley for faster shifting. Part of that is the upper pulley bearing is a ‘CN’ fit, meaning it’s designed without room for bearing play. Combined with a lower pulley with more float, Enduro says you get a faster, smoother shifting derailleur. 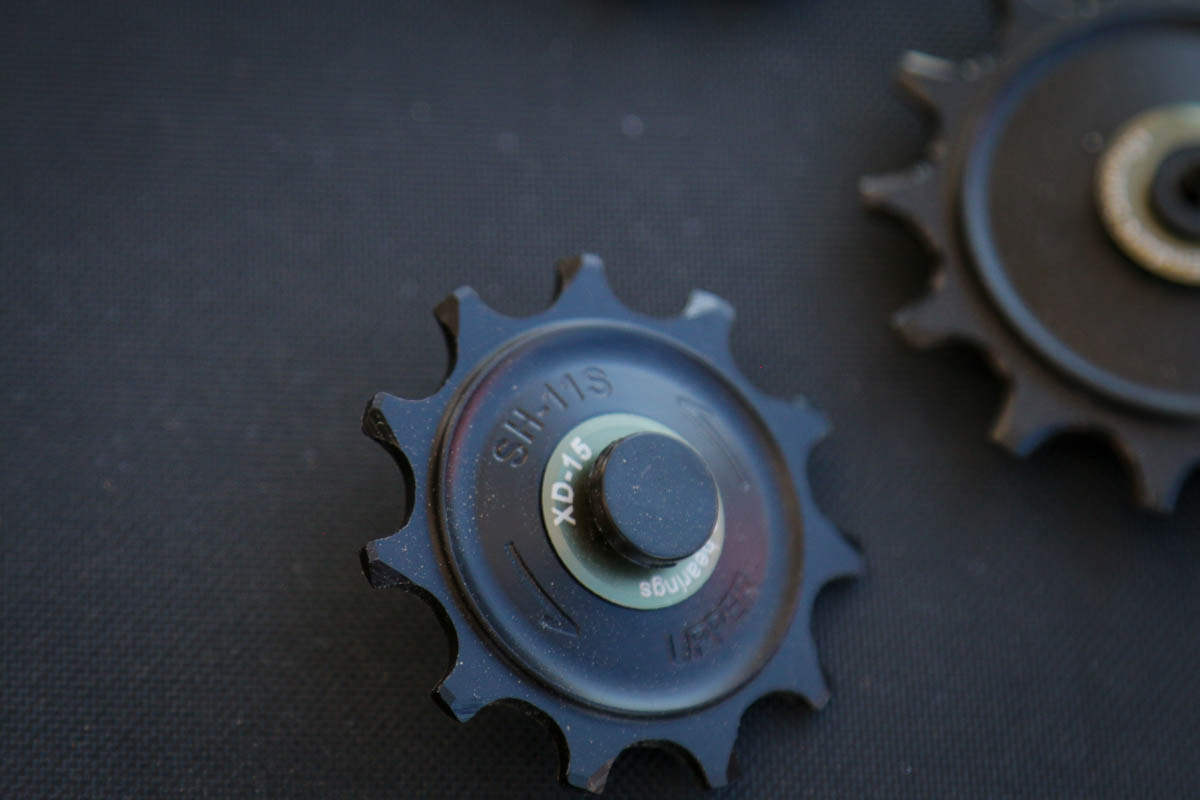 Enduro also specifically designed the pulleys without any holes to make them easier to clean. While the new design uses a smaller aluminum clamshell, Enduro says they’ve been able to stiffen the design of the pulley by adding a ‘rib’ on both sides. as an added bonus, the rib will serve as a stop for wax chainlube buildup, pushing it off the pulley instead of allowing it to turn into a wax hockey puck.

Sold in a set of two, the GRX pulleys include XD-15 bearings and will sell for $129. 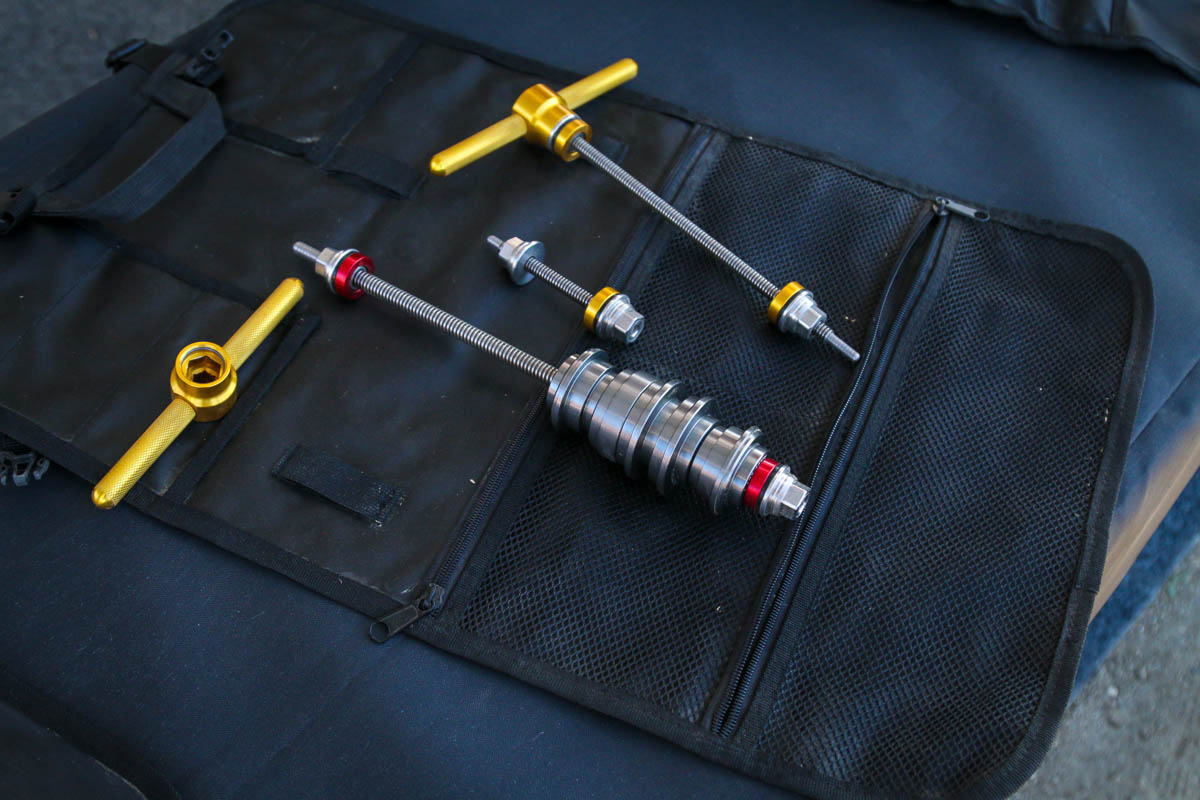 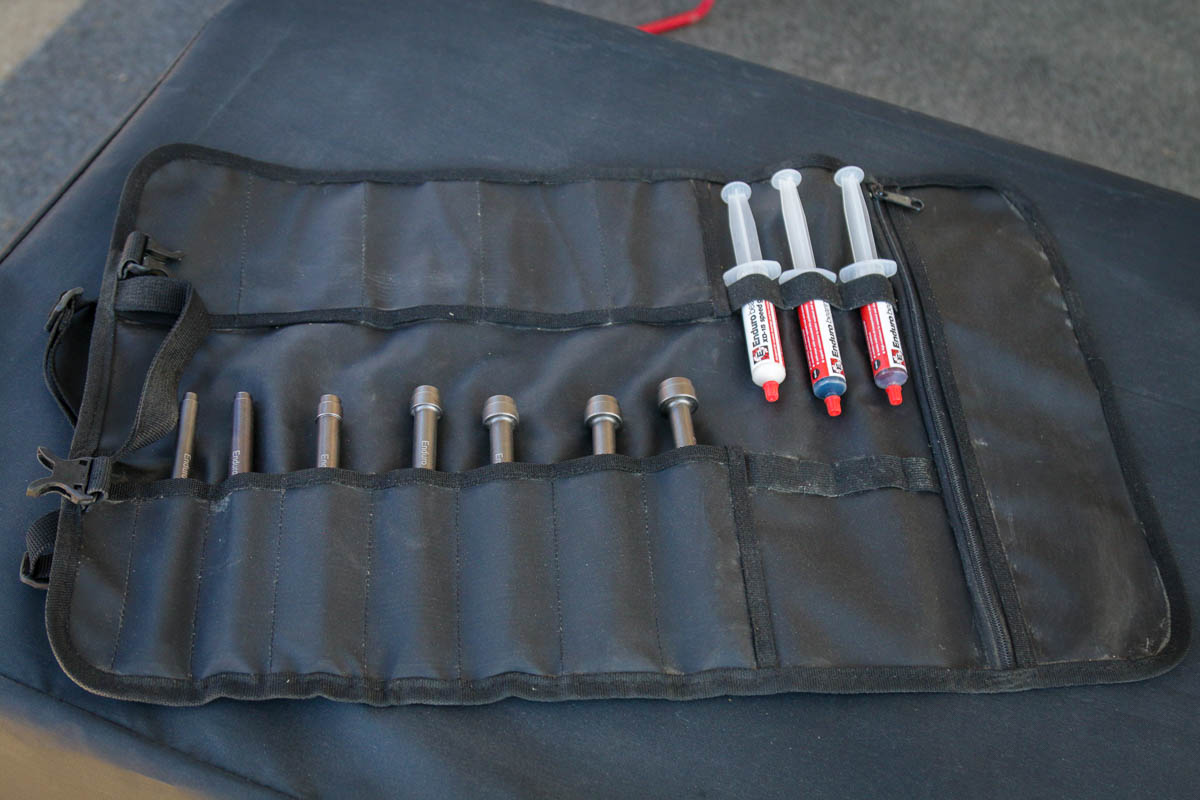 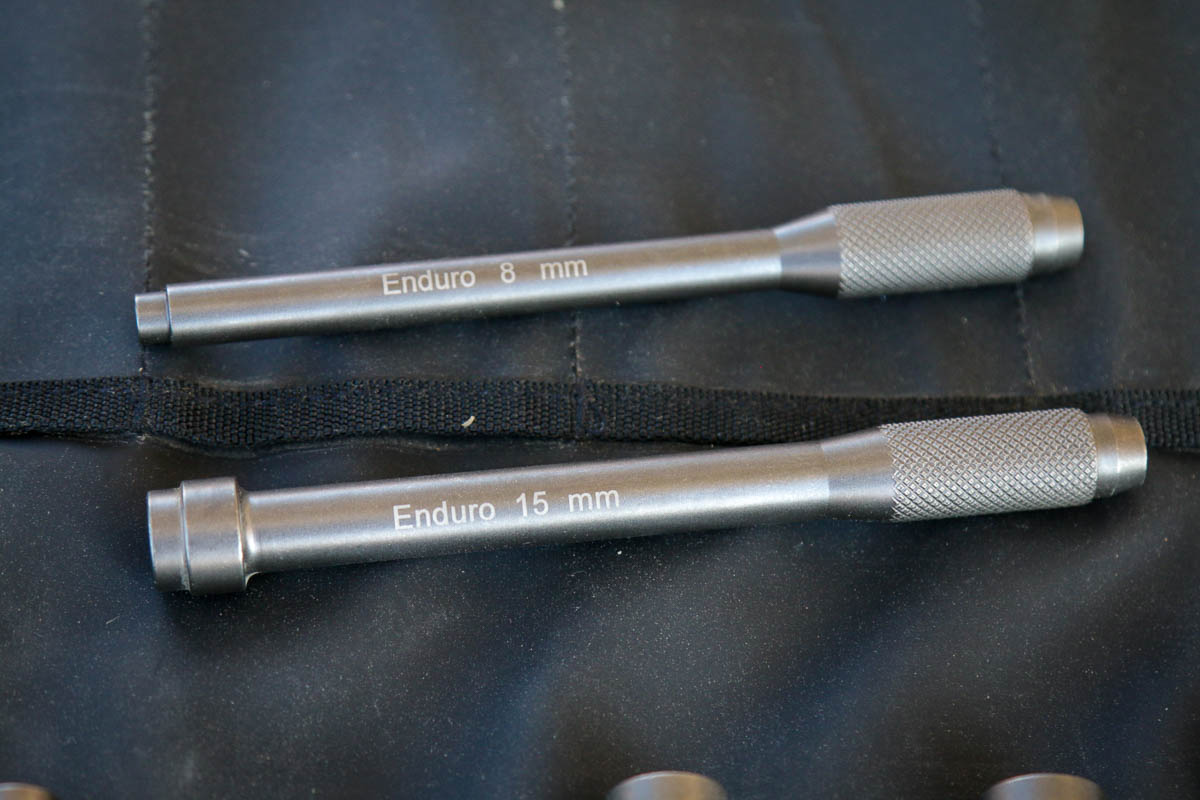 We’ll have more on these in a separate post, but Enduro has some important additions to their professional tool line. That includes a new BRT-050 Multi Press that can do headsets, hubs, and suspension pivots, a BRT-030 stainless steel Pro Bearing Punch Tool Kit, and a ridiculously nice BBT-222 stainless steel Pro Blind Hole Puller and Mallet set. While the prices are definitely pro-level as well, Enduro’s co-founder Matt Harvey admitted if making money on these was the goal, they’d have to be priced much higher. Instead, Matt says he simply wants the pro mechanics out there to have the best tools.

Really cool stuff here! I’m loving all of it, but the pulley price is, I’m sorry, ridiculous. $75 would be on the high end of reasonable IMO. But, I completely understand that I am not the target market at this price point. Oh well.

Wasn’t excited about the headset, even in harsh conditions they seem OK, but the BB looks excellent. Worried it will be very very expensive but extra durability in this area would be very welcome.