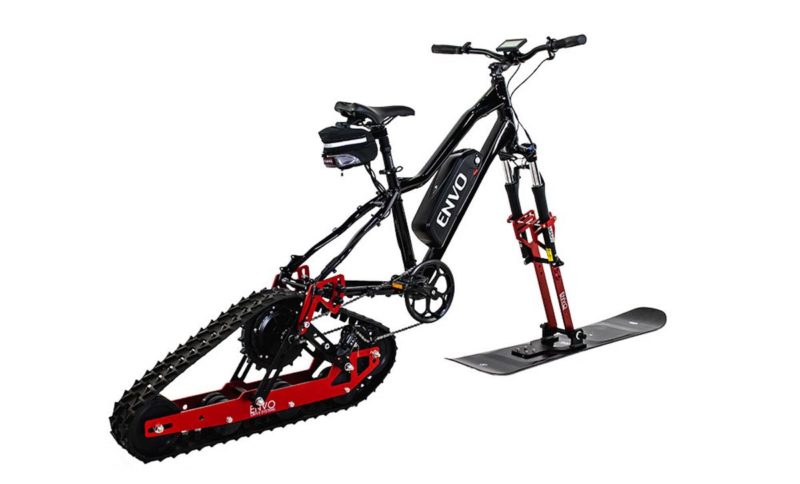 Even the biggest fat bike tires struggle in certain conditions. But a rubber snow track with a flat contact area more than a foot long? Well, that might just get you somewhere. And unlike track-based snow bike conversion kits we’ve seen in the past, ENVO’s kit is built around an electric assist platform. It still won’t be nearly as fast as a real snowmobile or Timbersled, but it should be fast enough for some fun. 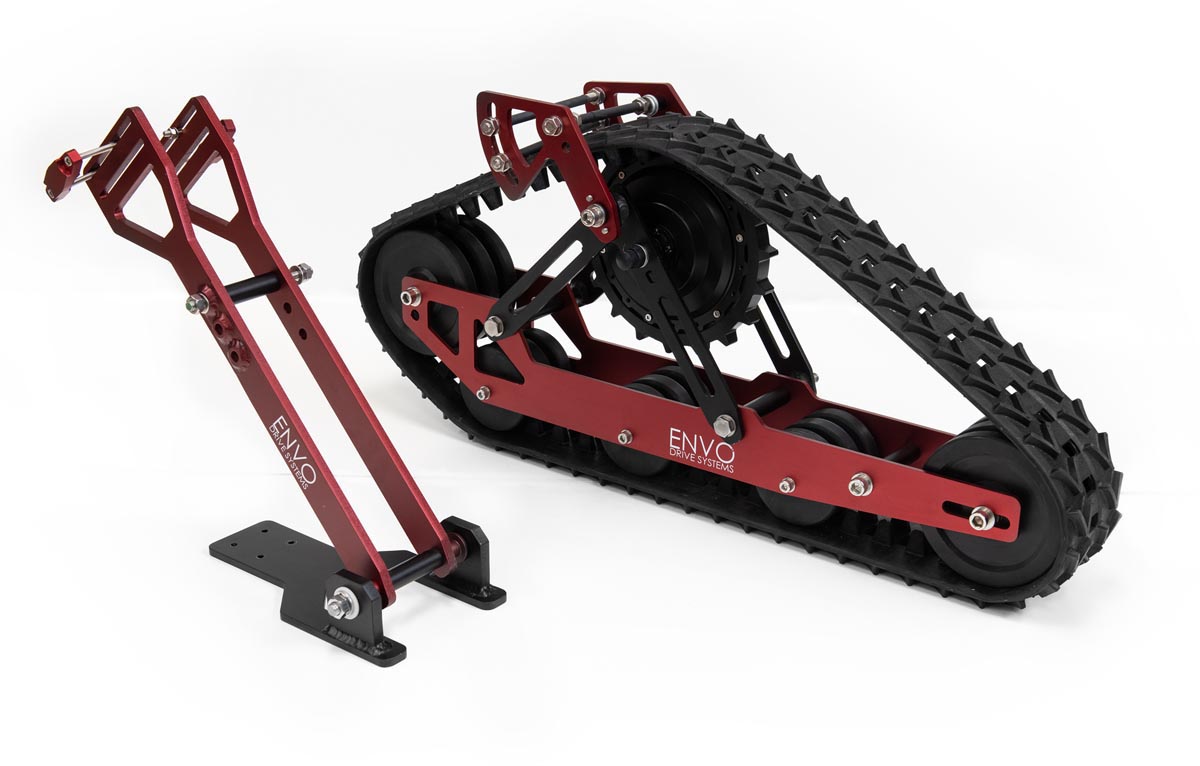 Sold only as a kit without a frame, ENVO calls this the first pedal-assist electric snow bicycle kit available. But they also make it clear that this is “a DIY product preliminary launch for early adopters.” The fine print basically states that since they are entrusting you with the assembly of this beast, if it fails in any way, they won’t be liable. You even have to sign a Liability Waiver before purchasing. But if that isn’t enough to sway you from building a sweet snow-crushing e-bike thing, then read on.

The kit supposedly works with many frames and forks, however the ENVO website doesn’t list any frame requirements, so it’s not clear what dropout spacing or standard will work here. But if you’re actually planning on purchasing one, we’re sure that ENVO can guide you in the right direction. 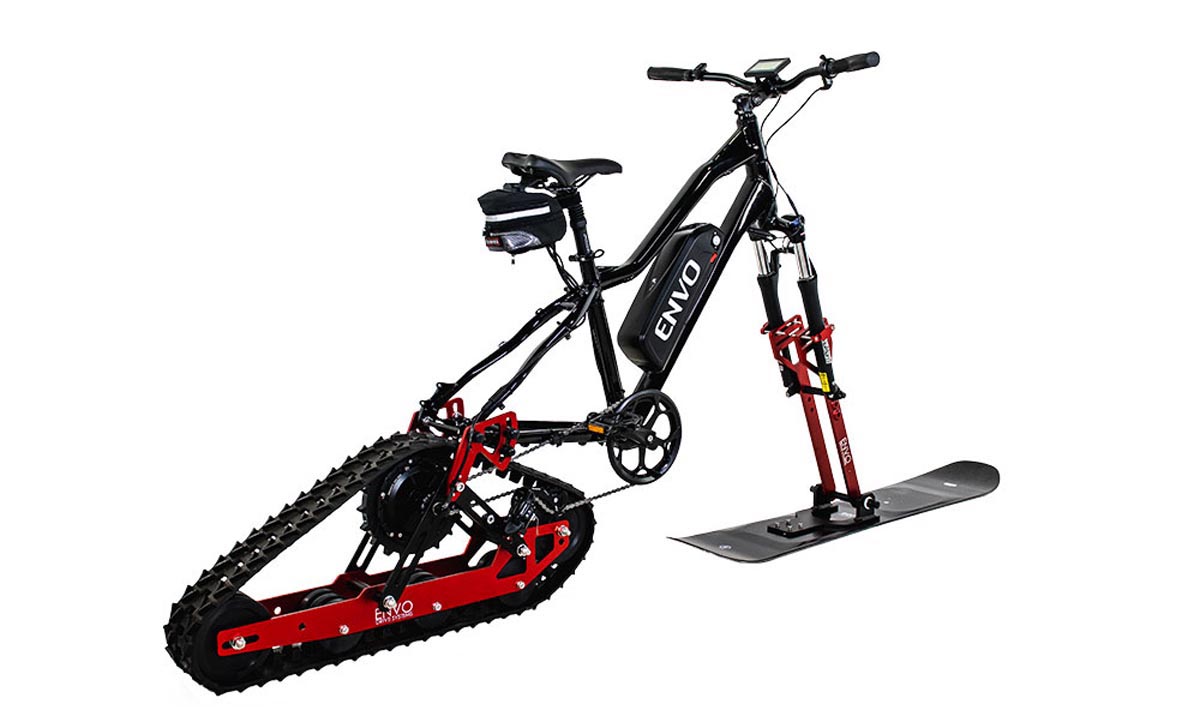 Included is just about everything you’ll need to convert a regular bicycle into an e-assisted snowbike. That includes the ‘Bogie’, or the machined aluminum housing for the track and the motor, the motor, battery, front snowboard and fork mount, display computer, motor controller, pedal assist sensor, brake cut-off switches, and the controller/tool bag for the seat.

The track itself has deep V-shaped tread blocks and is capable of riding in powder up to 30cm, and can climb 15-20% grades depending on the rider weight. The motor is rated to 750W which is good for a max speed of about 18km/h or just over 11mph. Compared to a fat bike in certain situations, that might actually feel fast. 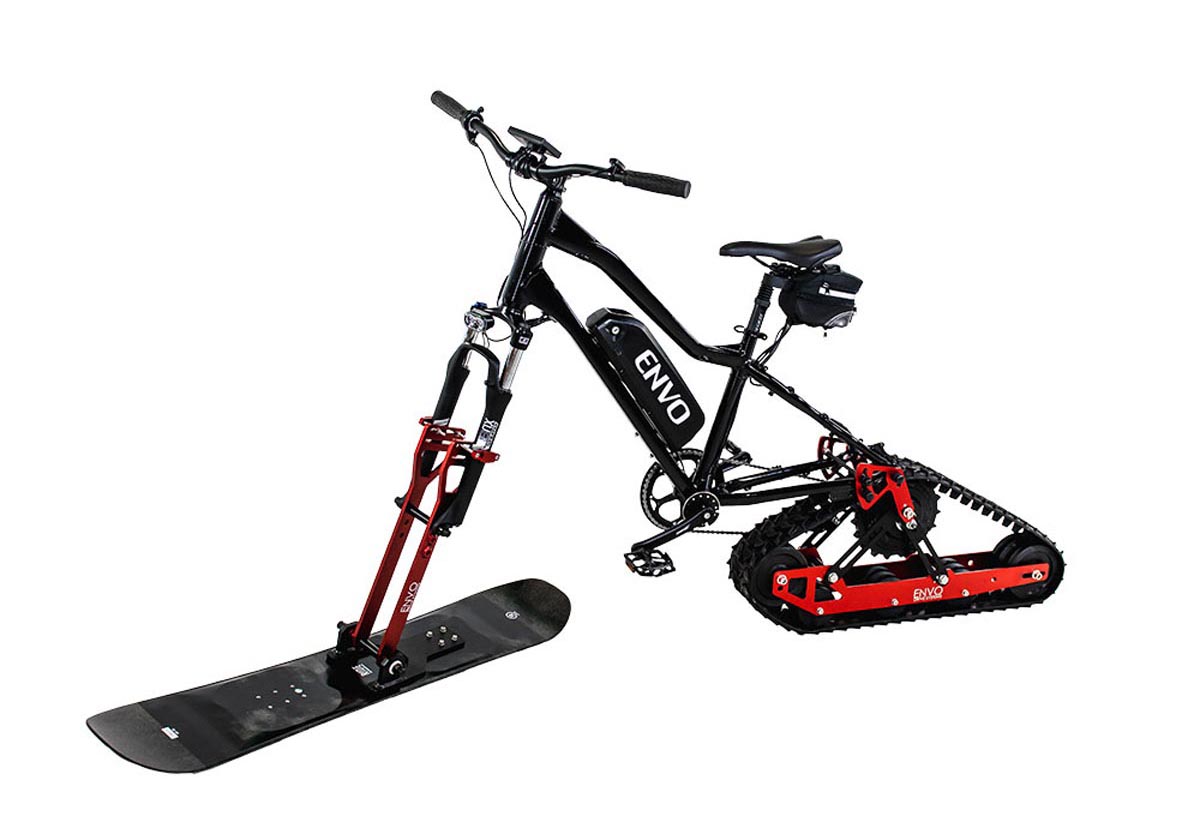 A wide snowboard up front helps with stability, and (potentially) carving turns. The real question is whether the track has the ability to freewheel when going downhill, or if you’ll be limited to the maximum speed of 11mph even when pointed downhill.

If you are willing to test out those unknowns yourself, the kit without a frame sells for roughly $2,157.

That brake lever engine cut off makes me think it might not ‘freewheel’ but I could be wrong.

just check that your huffy fork can take the increased 200 nm of leverage from that fork ski contraption at the front.