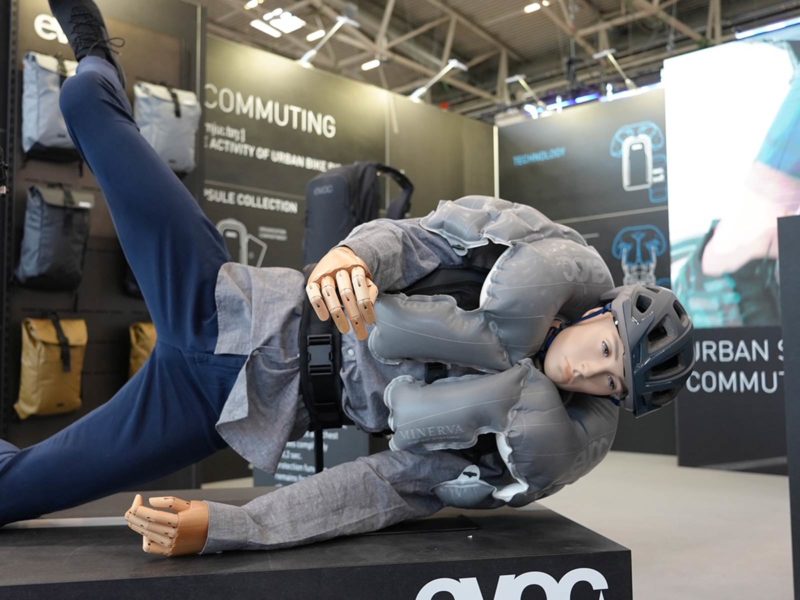 EVOC have partnered with Minerva Air Bag Systems to produce a commuter pack for cyclists that rapidly inflates a hidden air bag in the event of a crash. This kind of technology isn’t new; we’ve seen it adapted for use by motorcyclists and construction workers who are regularly at risk of falling from height. Now, EVOC have reworked the technology, stuffing it discreetly away into an 18 Litre Back Pack for the cycle commuter; we got the low-down on the EVOC Commute A.I.R. Pro Pack, still a concept, at IAA Mobility. 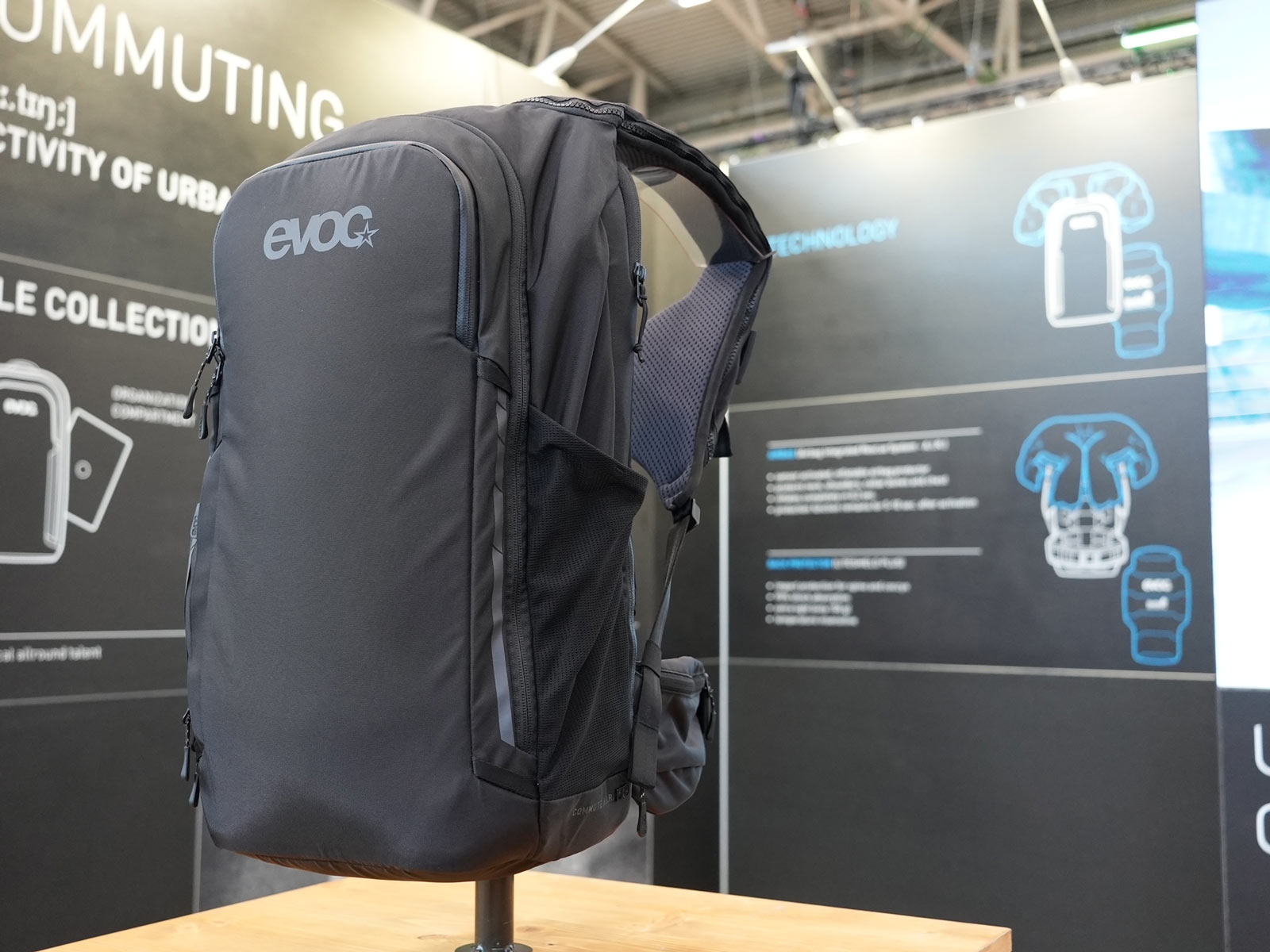 EVOC have just massively upped their game with a next-level safety feature for the cycle commuter; the Airbag Integrated Rescue System. At a glance, the EVO Commute A.I.R. PRO 18 looks much like any other professional commuter pack, but tucked away inside is a bag that will automatically and rapidly inflate, expanding to cover the wearer’s neck, collar bones, chest and shoulders, during a crash.

The idea is that the bag inflates before you suffer an impact, inflating as you’re on the way to the ground. Multiple sensors are used to control activation of the bag, comparing the position of the rider’s body with the speed of motion. Full inflation occurs just 0.2 seconds following activation, and the bag remain inflated, protecting the wearer, for a further 5-10 seconds thereafter. 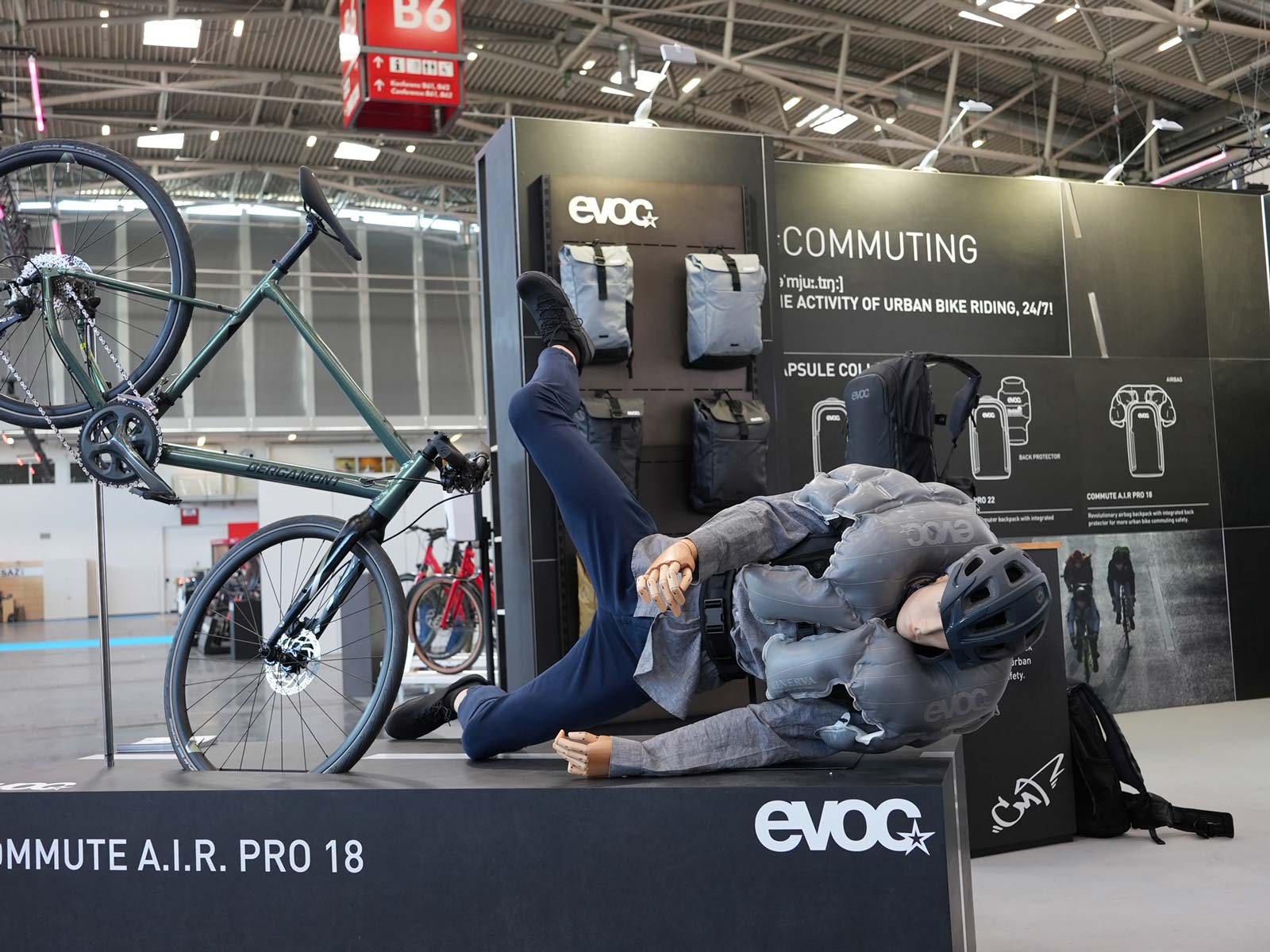 So, it’s mainly going to work if you both decelerate suddenly and start to lift or roll dramatically. Scenarios i’m imaging include putting your front wheel in a pothole or tram track and getting sent over the bars, hitting a vehicle, or a car door that’s been thrown open without a moment’s thought.

The pack’s chest clip is an electrified Fidlock buckle that snaps closed using a magnet. It turns the system on and an indicator light tells you the status; red is arming, flashing green means it is ready to go and flashing red/green alternately means there’s a system error. 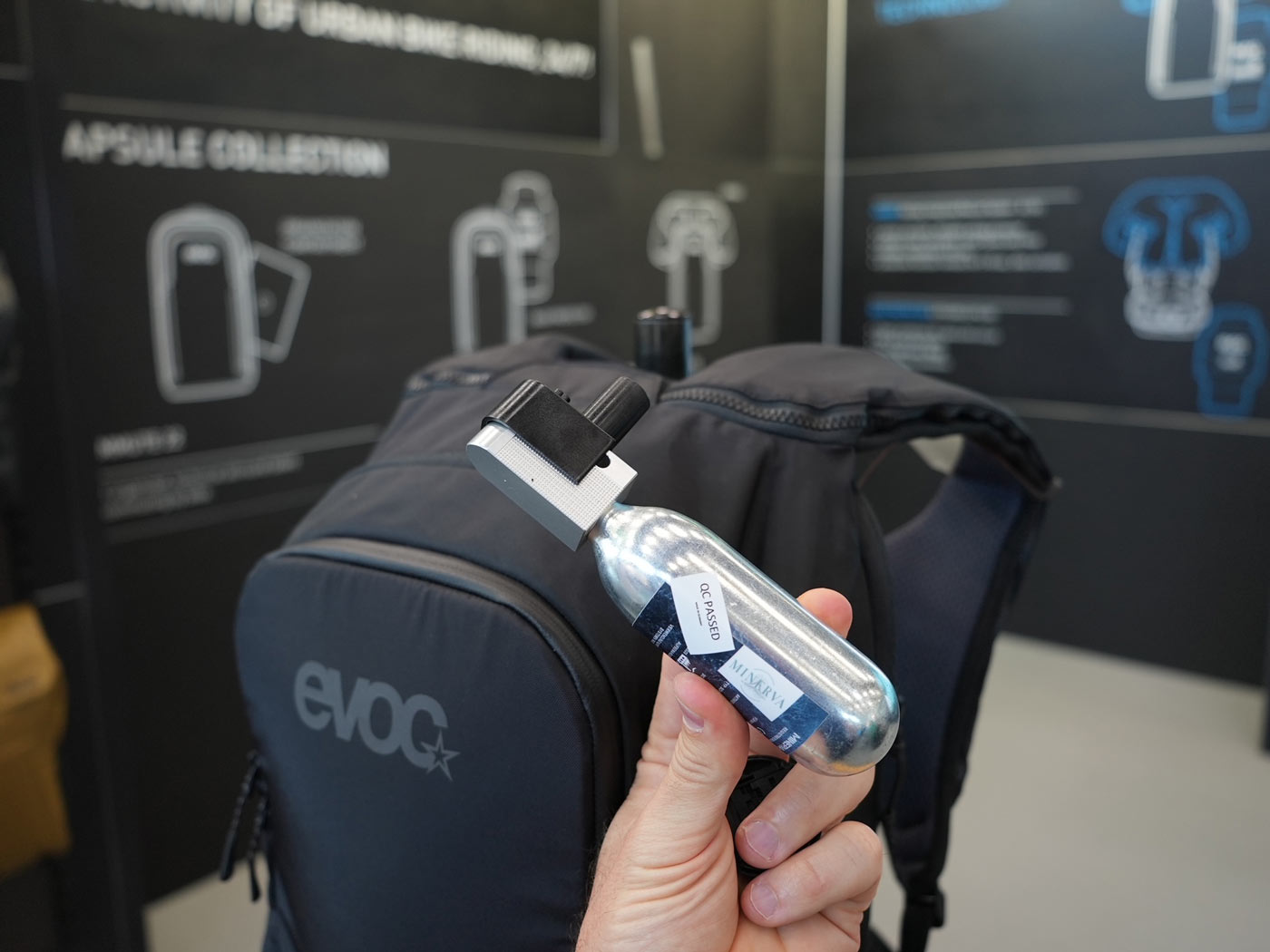 This is not a single-use safety feature. Inflation is delivered by the release of CO2 from a canister that is tucked away inside the lining of the pack. You can send the canister back to EVOC for a refill for $40 USD.  The Airbag simply folds back up into the pack to be reused. 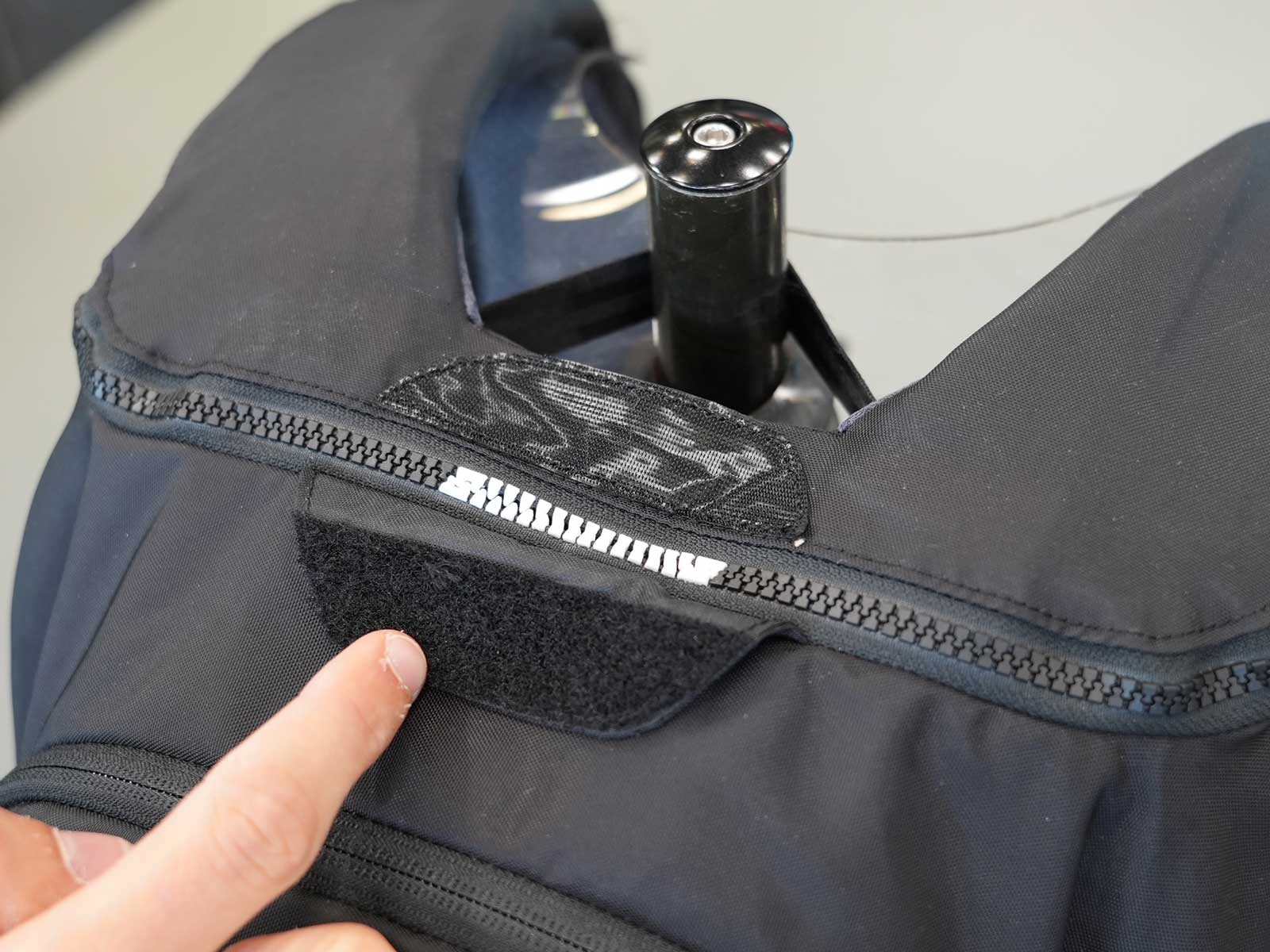 The Airbag bursts out from this white zippered region behind the wearer’s head. It is never actually closed, allowing the inflating bag to push open the rest of the zipper as it expands 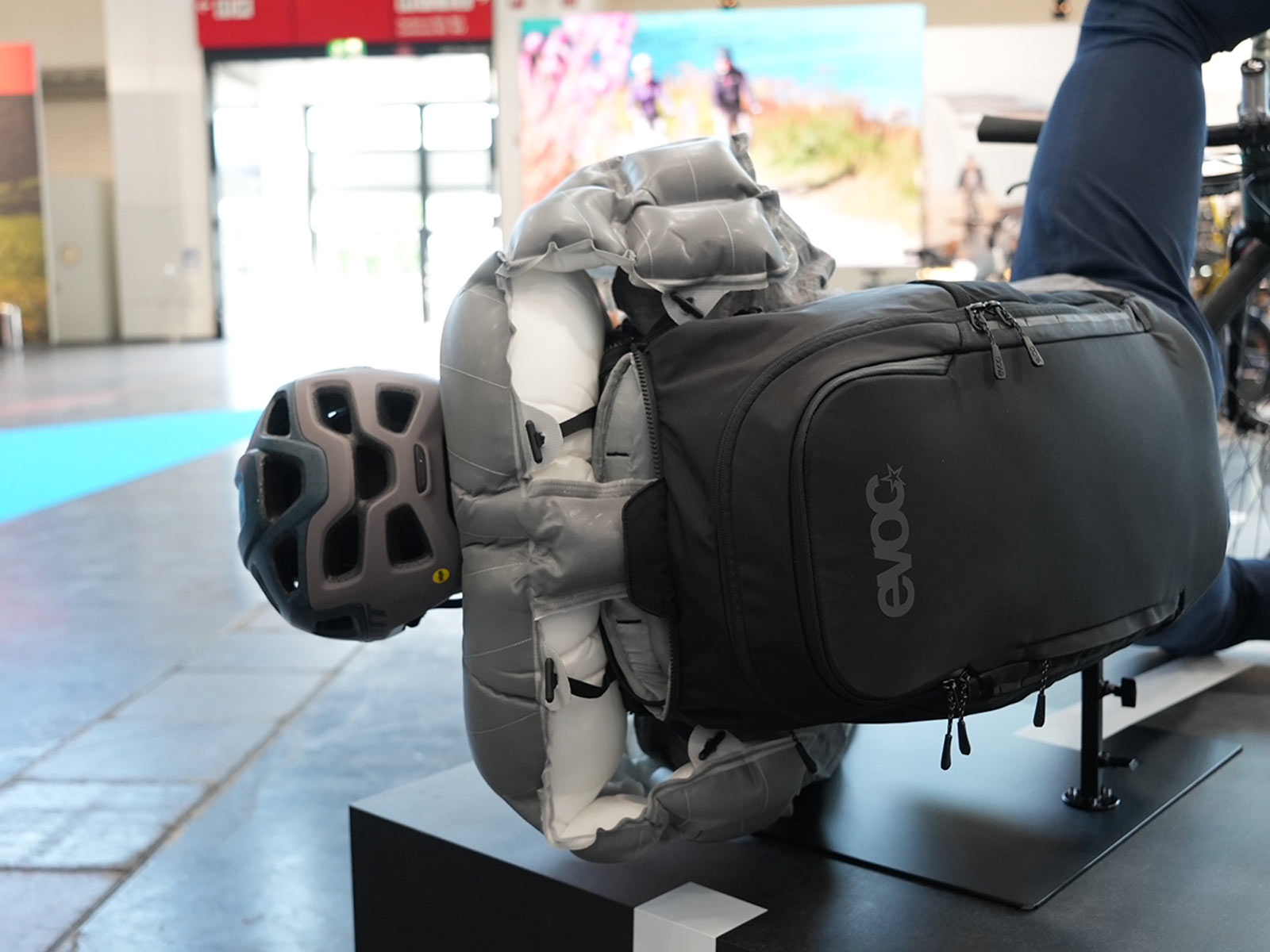 Like many EVOC packs for winter sports and mountain biking, the Commute A.I.R. Pro also gets an integrated Liteshield Plus Back Protector that runs the length of the pack. There’s also a wide and adjustable AIRO FLEX hip belt. Inside there’s a separate laptop compartment that can be accessed quickly by opening the side of the pack, as well as more organizer compartments for a phone, glasses and documents.

Anyone wanting this will probably not be able to go outside…too risky.

Tom
Reply to  None Given

Really? I cycle 5000 miles a year and cycle with 200 other cyclist that cycle as much or more. Everyone has fallen at some point. It is why we where helmets. Many of us have had a collar bone fractures. I have had 2. This sounds very attractive to me. I paid $2000 extra for a table saw that stops when it senses skin because my fingers are worth $2000. I think I could use the same logic here. My only concern is can I remember to unclip it before I get off the bike every time.

Socks are for closers.

I’ve used a motorcycle airbag for several years. This is great technology, there are far too many bike commuter fatalities every year.

Alex which one do you use and what is the warmest temperature you think you could comfortably wear it.

Anyone not wanting this has never fallen before

If it is true that every time it goes off you need to send it back for a $40 refill, that is going to be a big problem. I can’t see myself remembering to unclip every time I get off the bike.