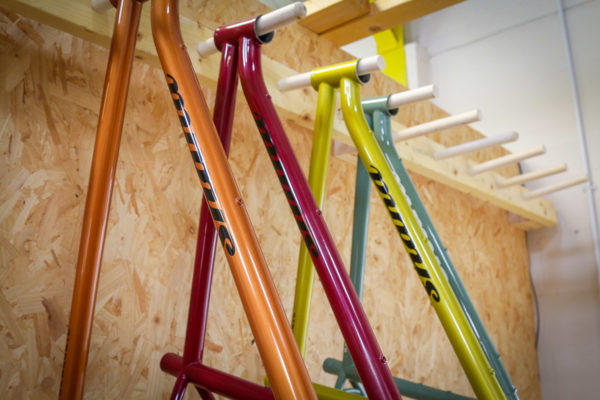 Tucked into a small corner of Scotland, Shand Cycles is alive and well. Originally a solo custom frame building operation started by Steven Shand in 2003, Steven joined forces with Russell Stout 2010 in an attempt to grow the brand. That brought them to their current location in 2011, though it has since grown considerably in size. What once consisted of little more than a jig, alignment table, and a lathe, has since grown into a small but fully functioning hub of bicycle manufacturing. And thanks to a surprising acquisition, it looks as if things are just getting started. 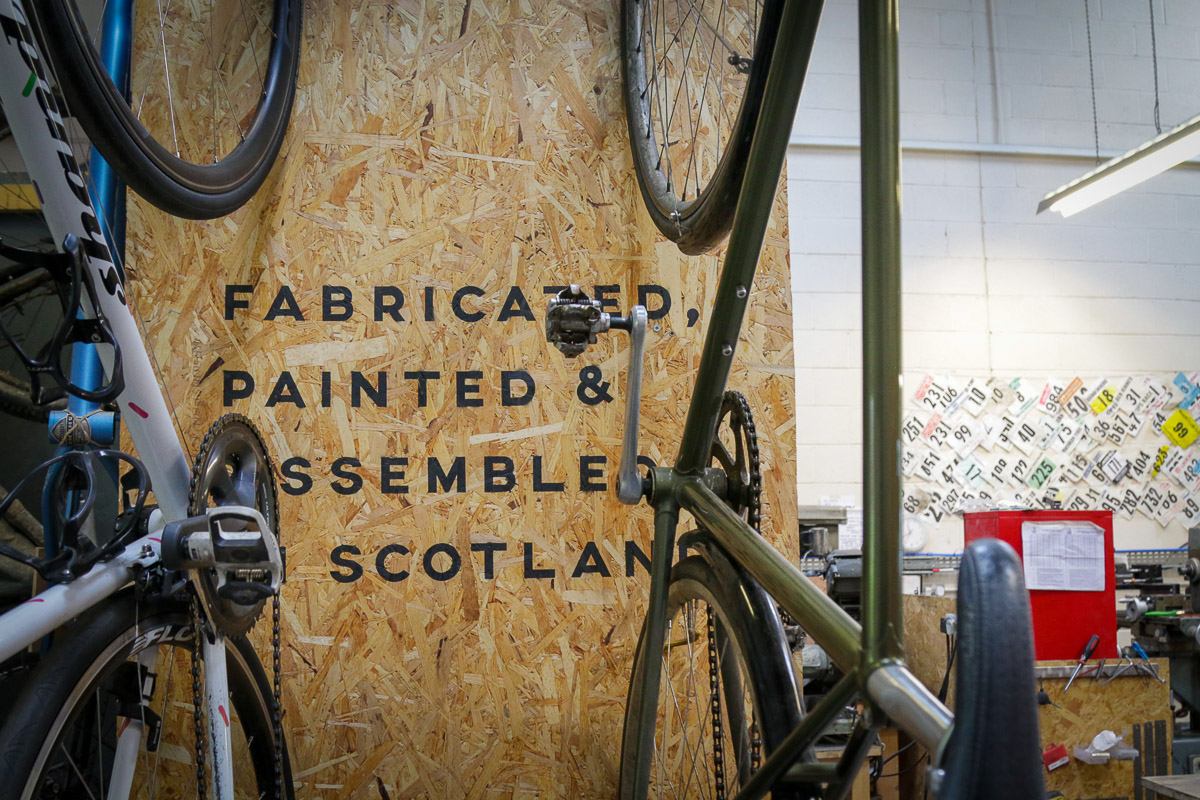 Late last year, it was announced that Shand Cycles had been acquired by the Liberty House Group – a massive industrial group that focuses primarily on vehicle technology and metals. But it’s important to point out that this is not your typical acquisition by a mega corporation. Instead, Liberty’s Executive Chairman Sanjeev Gupta has an eye on the rejuvenation of British bicycle manufacturing and seems to be using Shand as the base of operations. While that may seem a bit odd at first, consider that Sanjeev’s first job was selling bicycles by Victor which was a bicycle manufacturing company owned by his father. In a way, Sanjeev is following in his father’s footsteps, but in his own unique way with a focus on green technology and manufacturing. 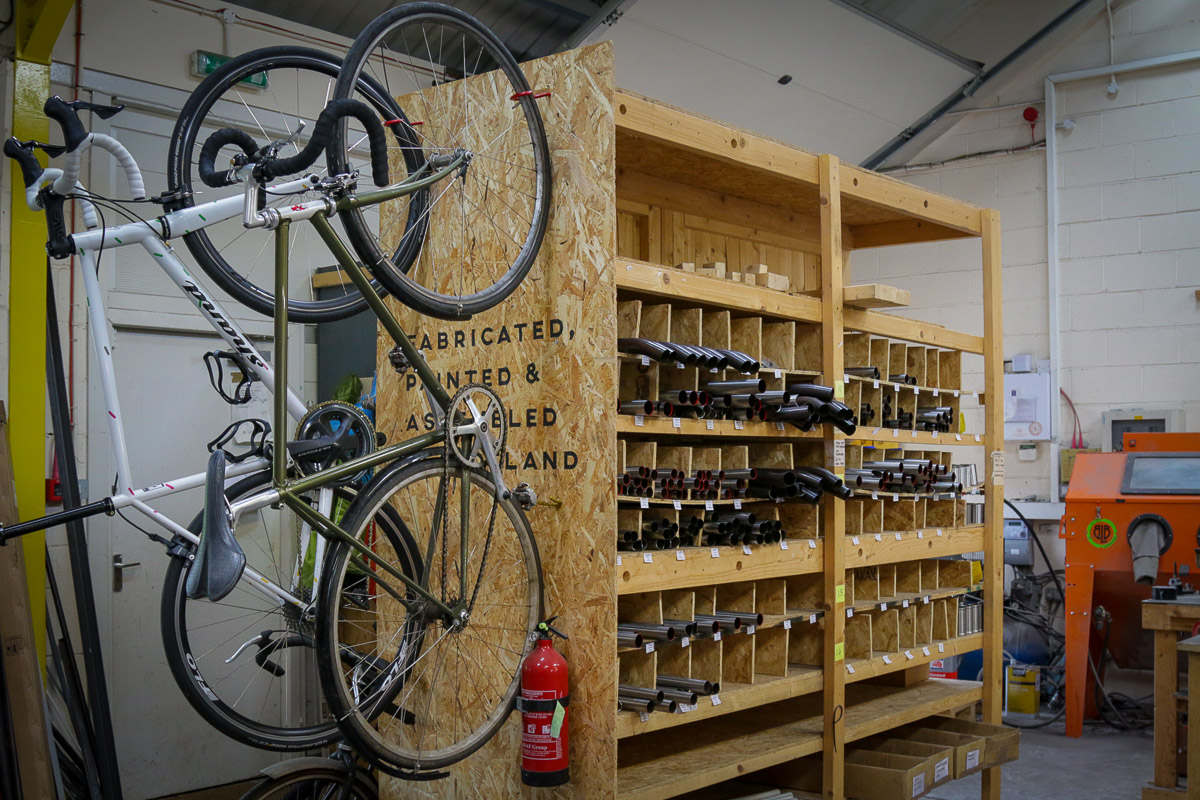 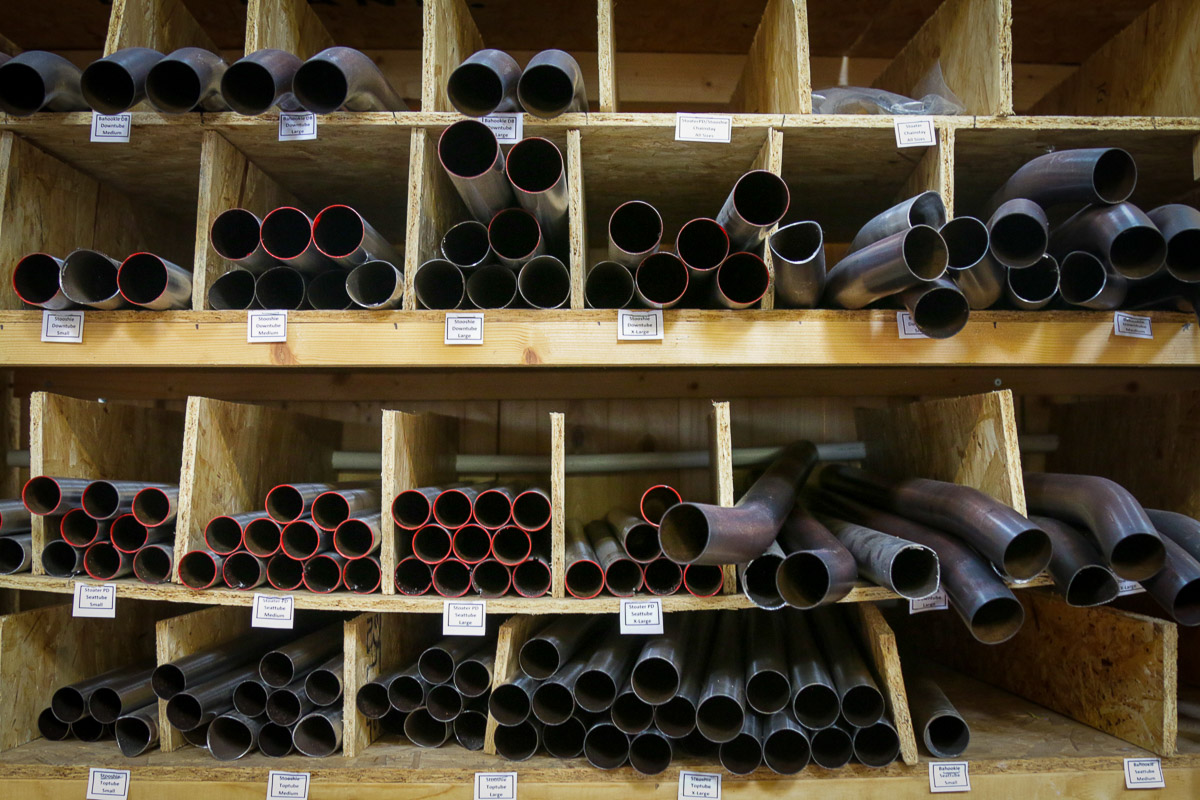 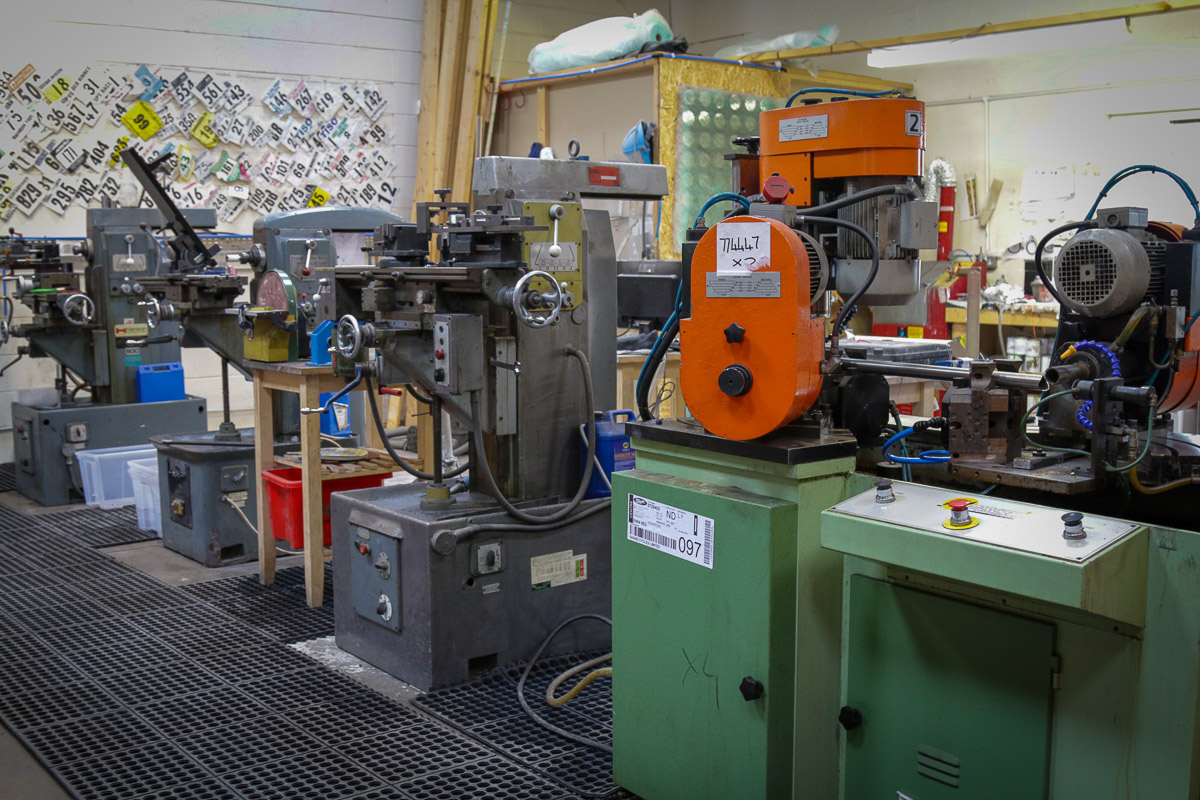 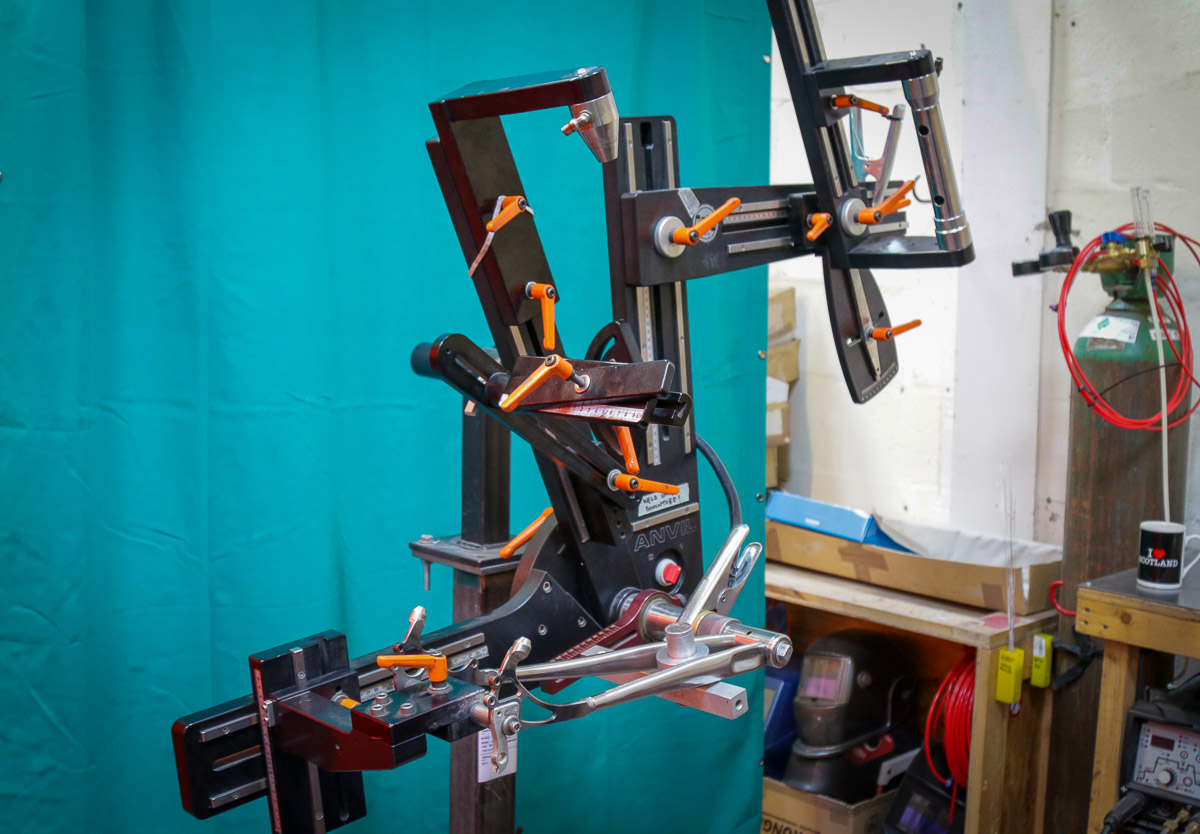 The result is the ability for Shand to continue to operate as normal, no, better than normal. Thanks to an influx of capital and access to new tooling, Shand is expanding their abilities and has already taken over manufacturing of Liberty’s Trillion brand. Part of their long term goal is to decrease the lead time in their frame production. Think semi custom, built to order frames that could be ready in 6-8 weeks for Shands, or even down to 3 weeks for stock version of the Trillion bikes. They aim to accomplish this by building in batches and streamline processes like tube cutting and mitering so you simply select a tube set for the bike that’s been ordered, tack it together in one of the Anvil jigs, and weld it up – which is hardly different than their current process. Just with plans to be a bit faster. 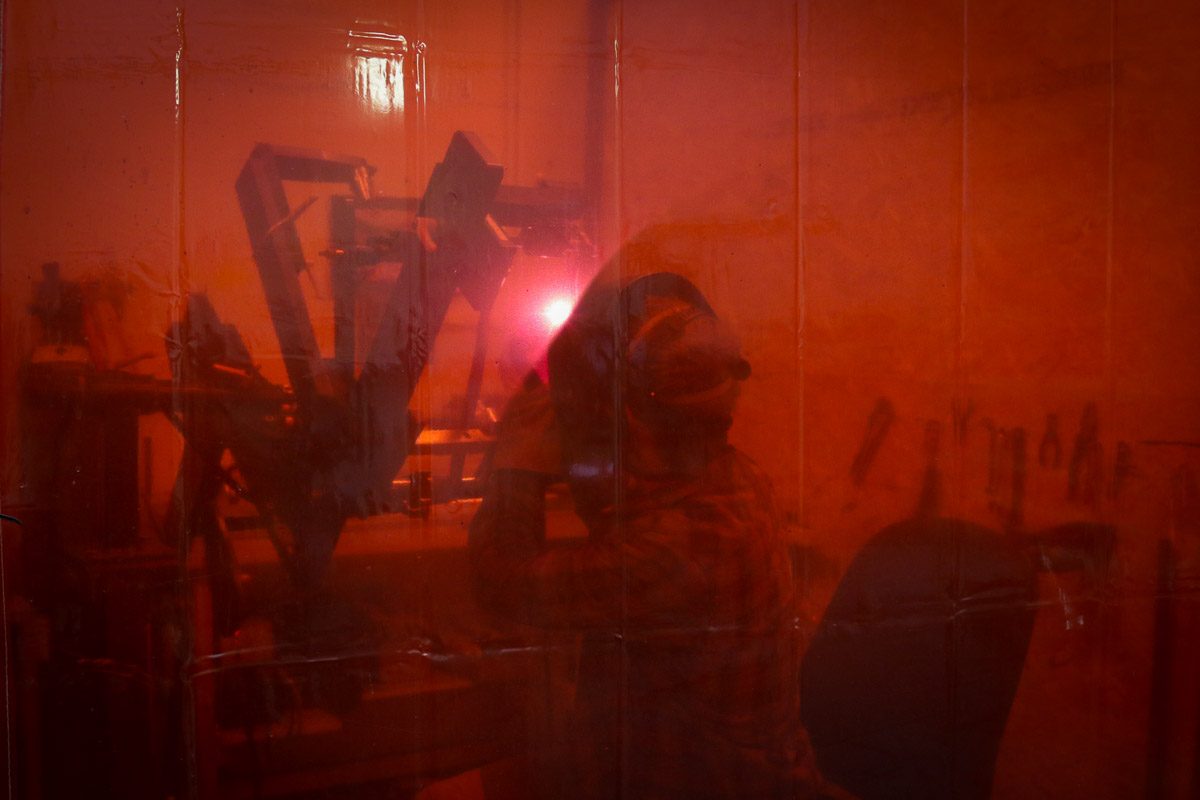 Stu under the hood tacking a new frame together. 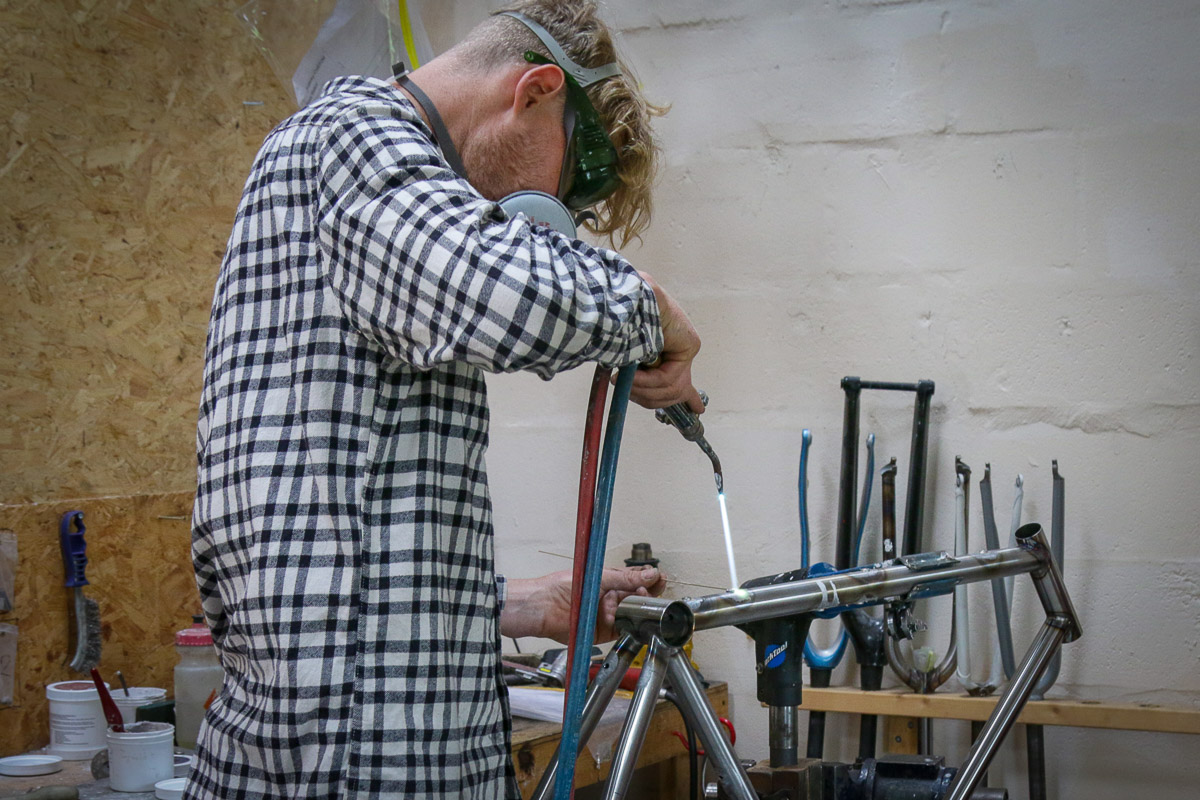 Meanwhile, Paul was in the next booth over doing some brazing work.

Once the frames are TIG welded together, it’s off to the next bay for the braze ons. This isn’t exactly revolutionary stuff, but it’s all meticulously executed on site and in house. 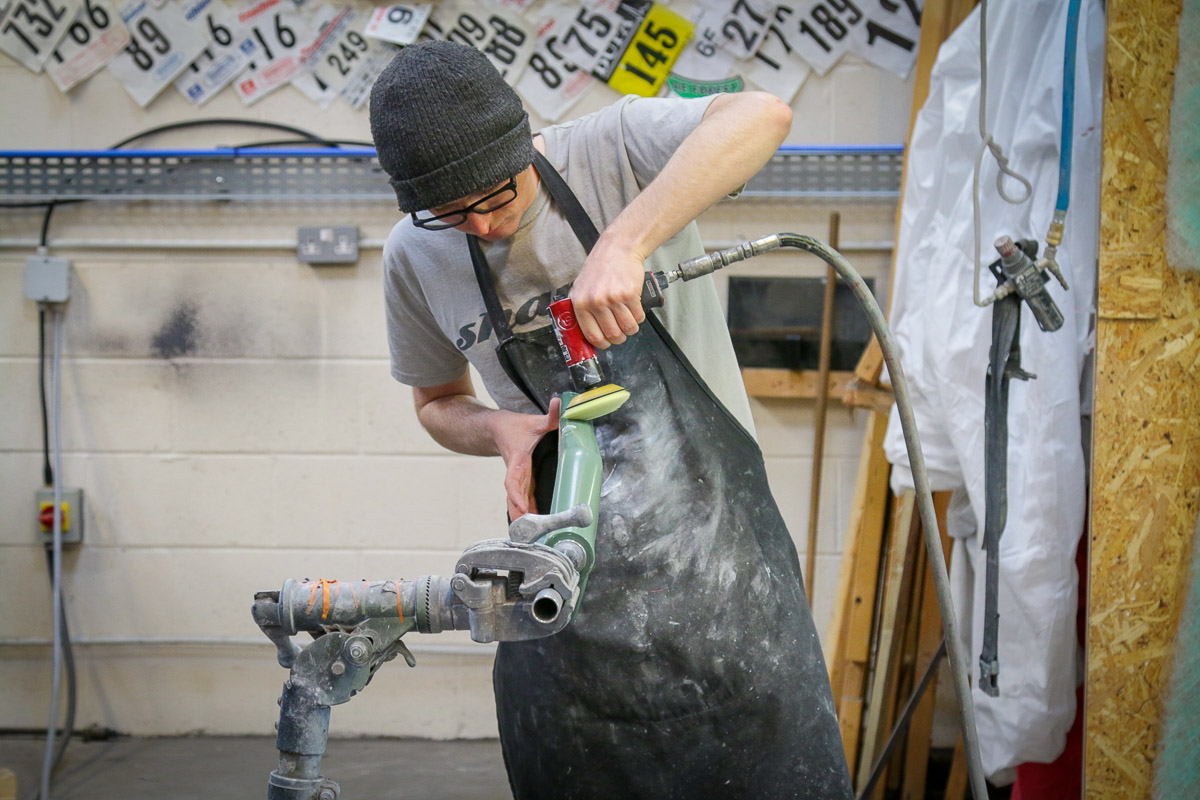 Euan finishing up the paint on a fat bike fork. 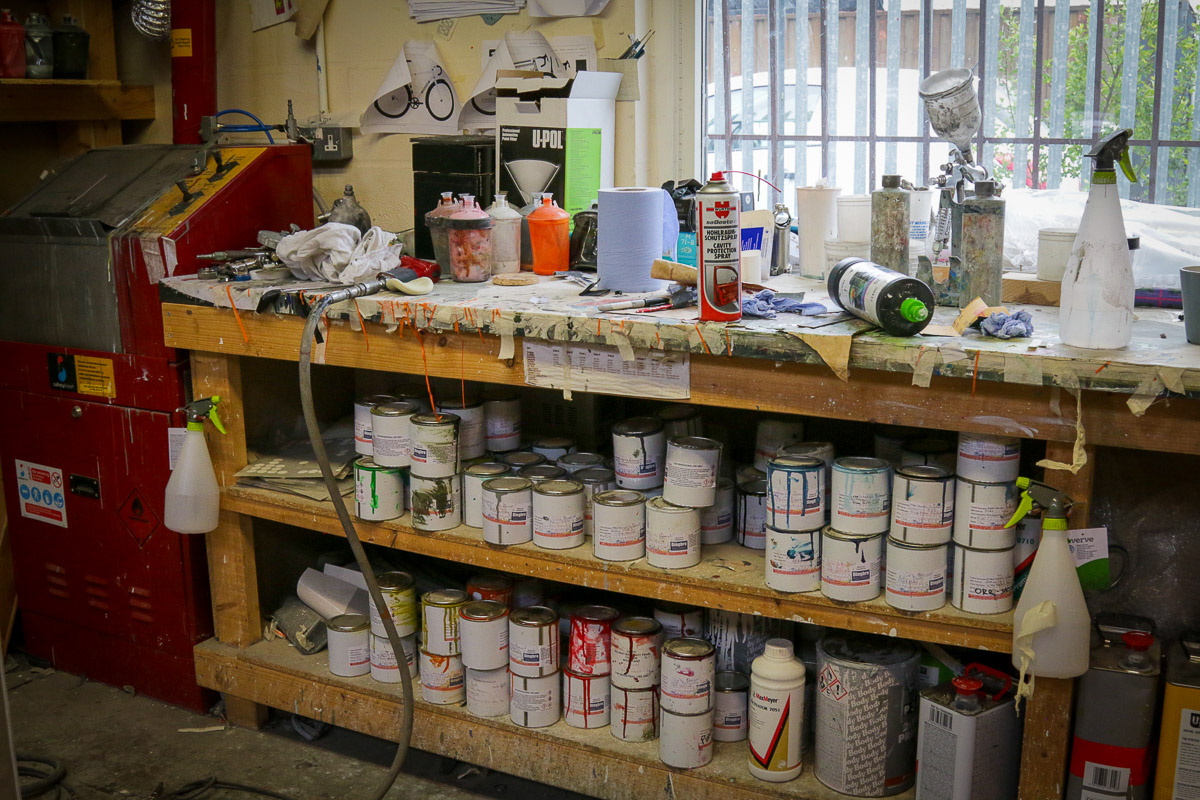 From there, it’s into the paint booth where Shands are currently available in standard colors with custom colors as an option as well. Part of the redevelopment is the addition of a new paint booth that Shand hopes will give them the ability to powdercoat frames and components as well. 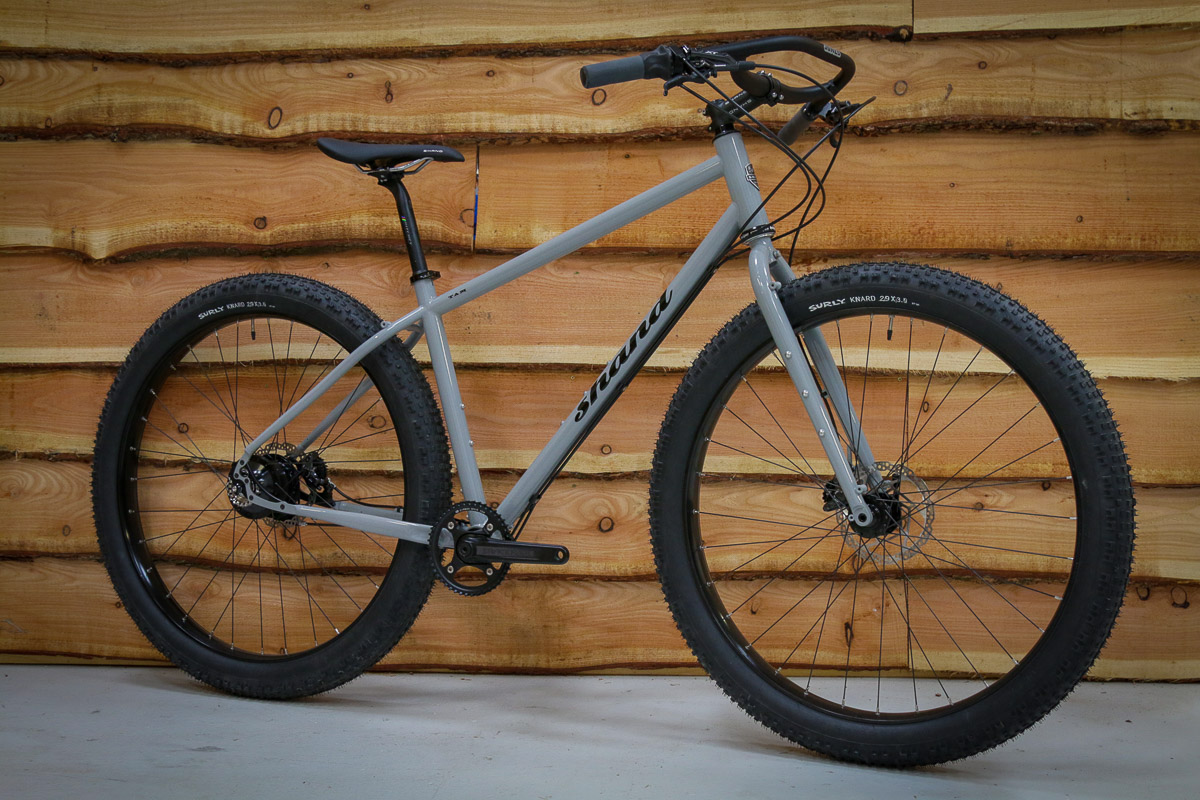 One of Shand’s newest models, the Tam. 29″ or 29+, modular dropouts, belt drive compatible, and plenty of mounts for a mountain tourer. 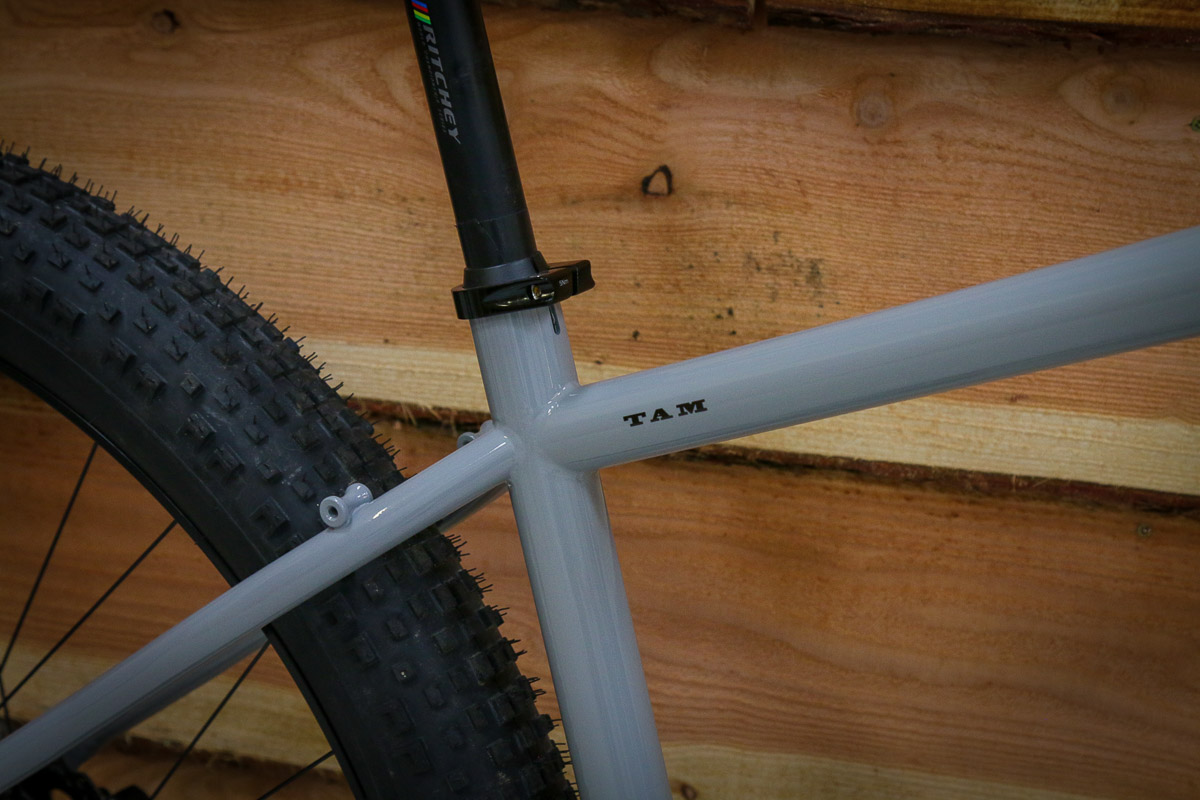 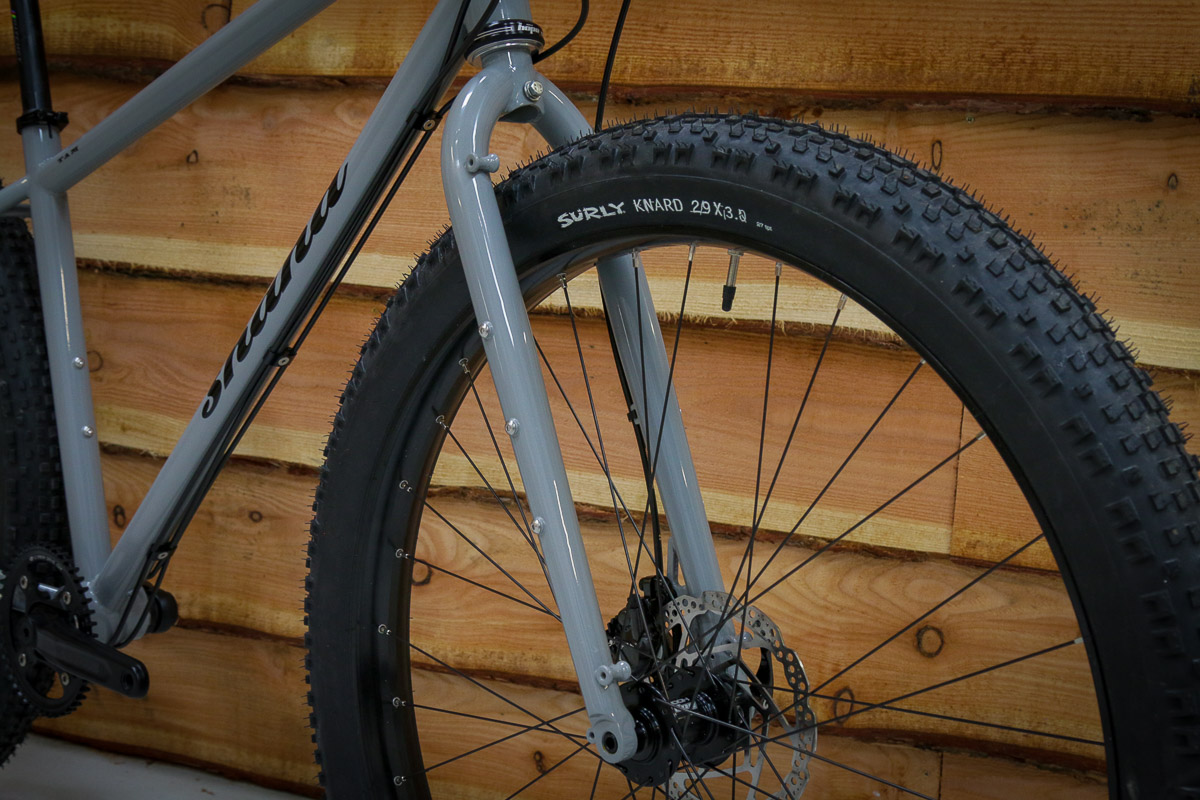 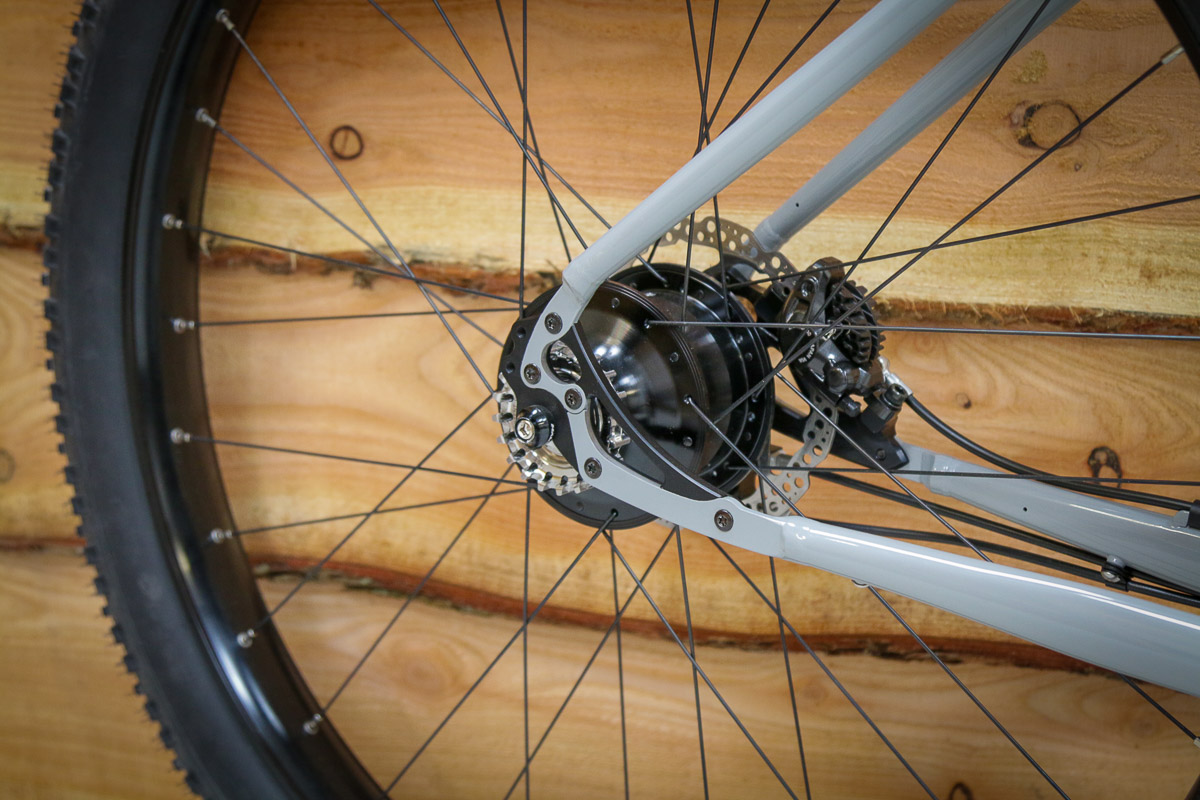 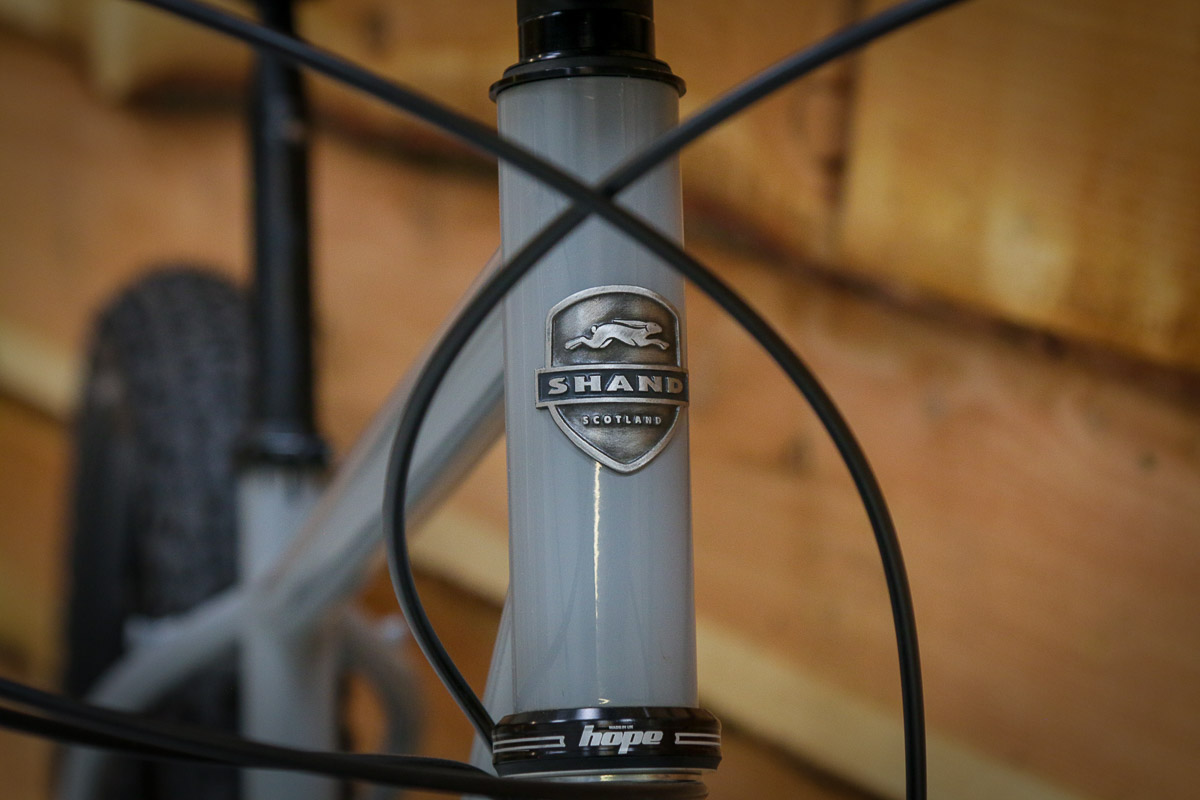 When Shand became part of the Liberty House Group, they were introduced to Matt Granger and Russel Cashmore who were part of the original Trillion team and are still based in Leamington Spa where Liberty has their Technology division. 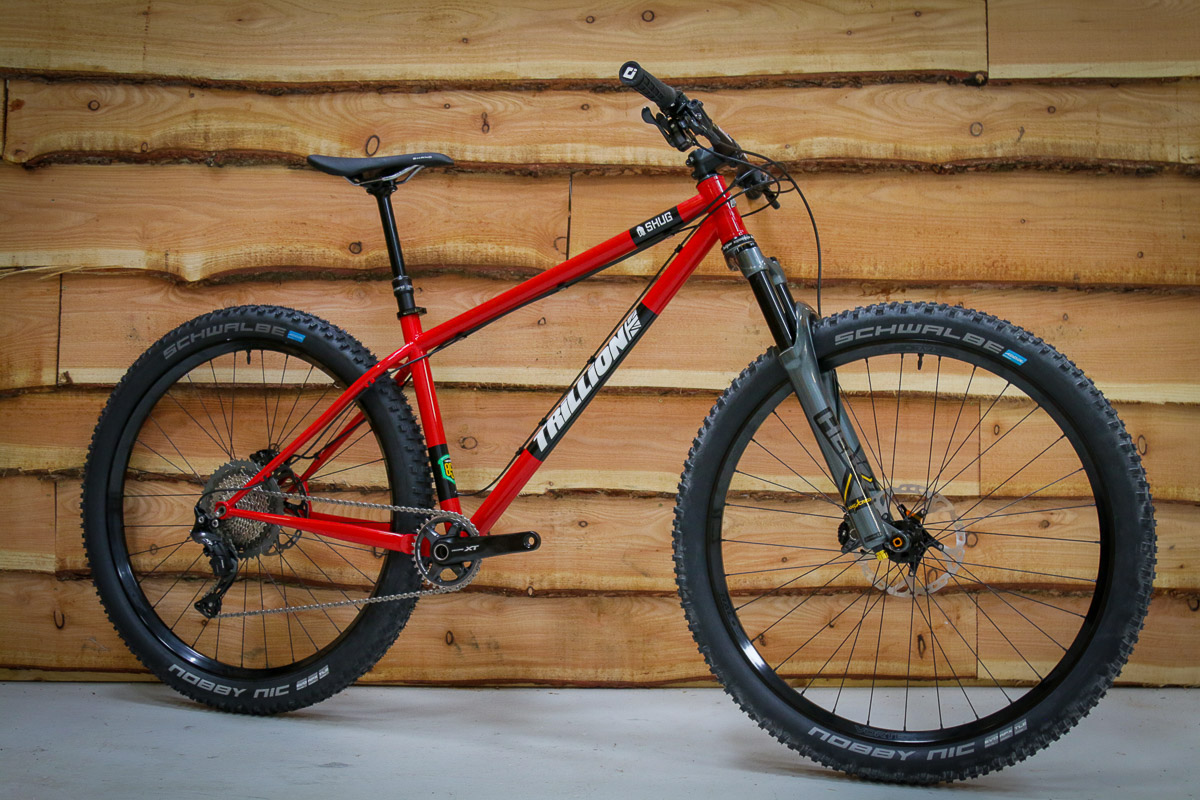 One of the brands under the Liberty roof, Trillion just launched their newest hardtail, the Shug. 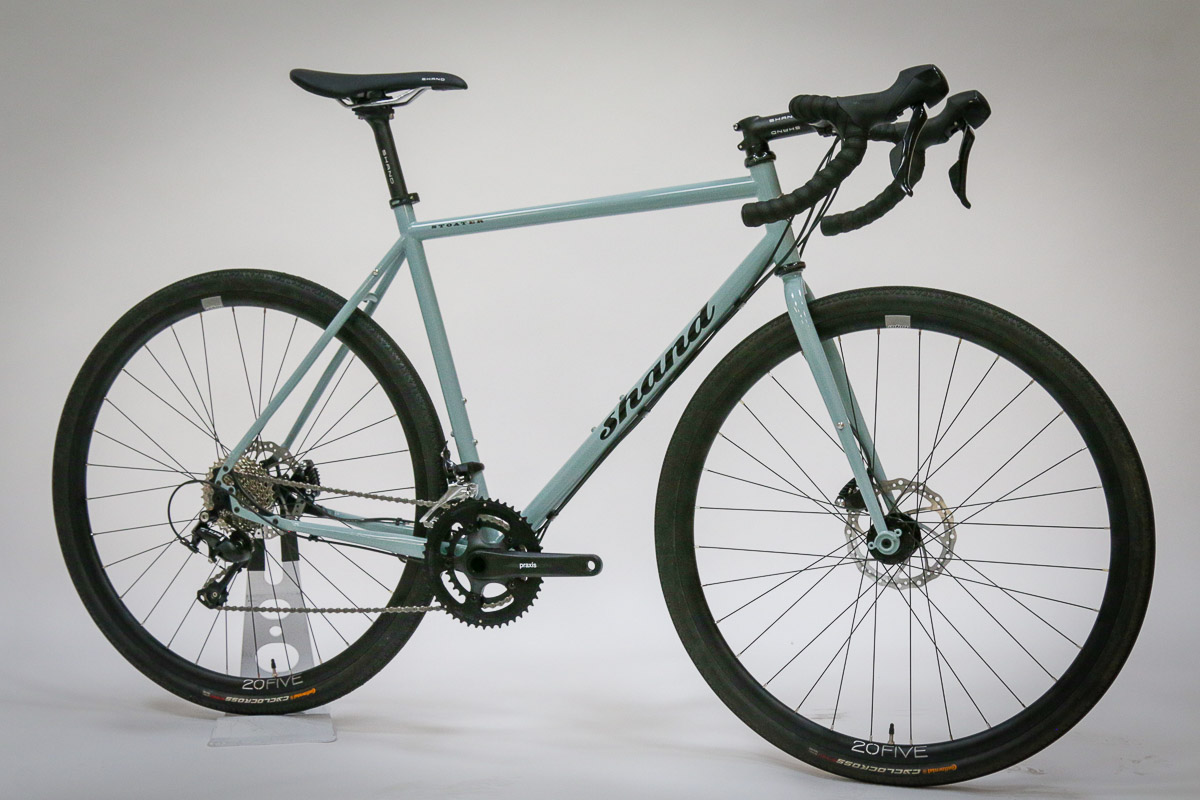 The Shand Stoater is an all road build with 700c x 45mm or 650b x 47mm tire clearance, thru axles, modular dropouts, and the ability to run EBBs for single speed or belt drive use. 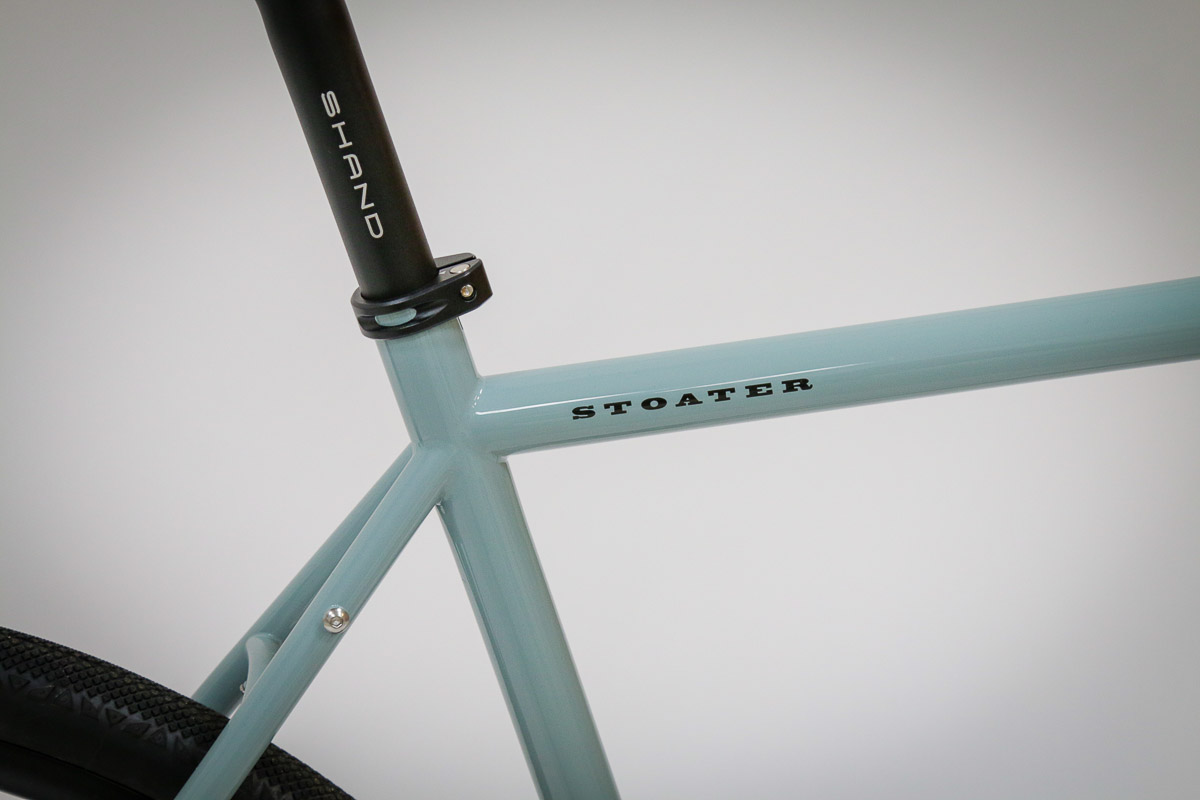 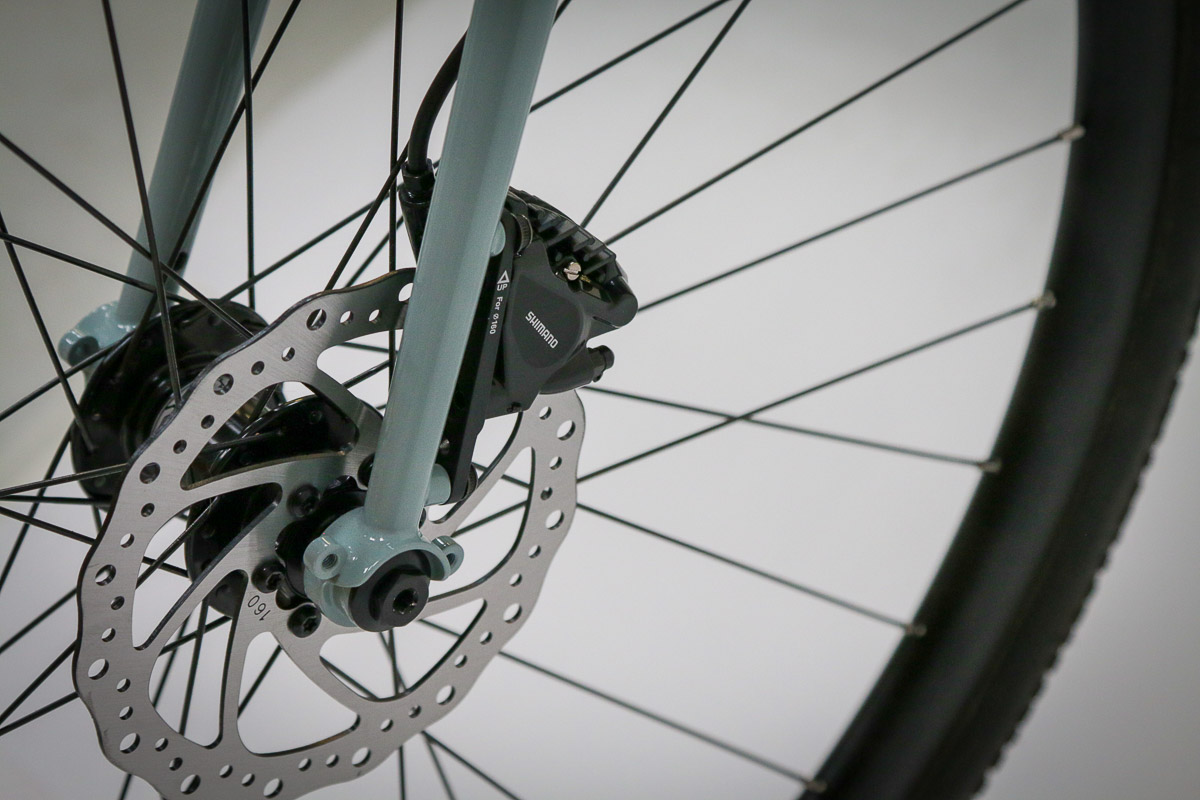 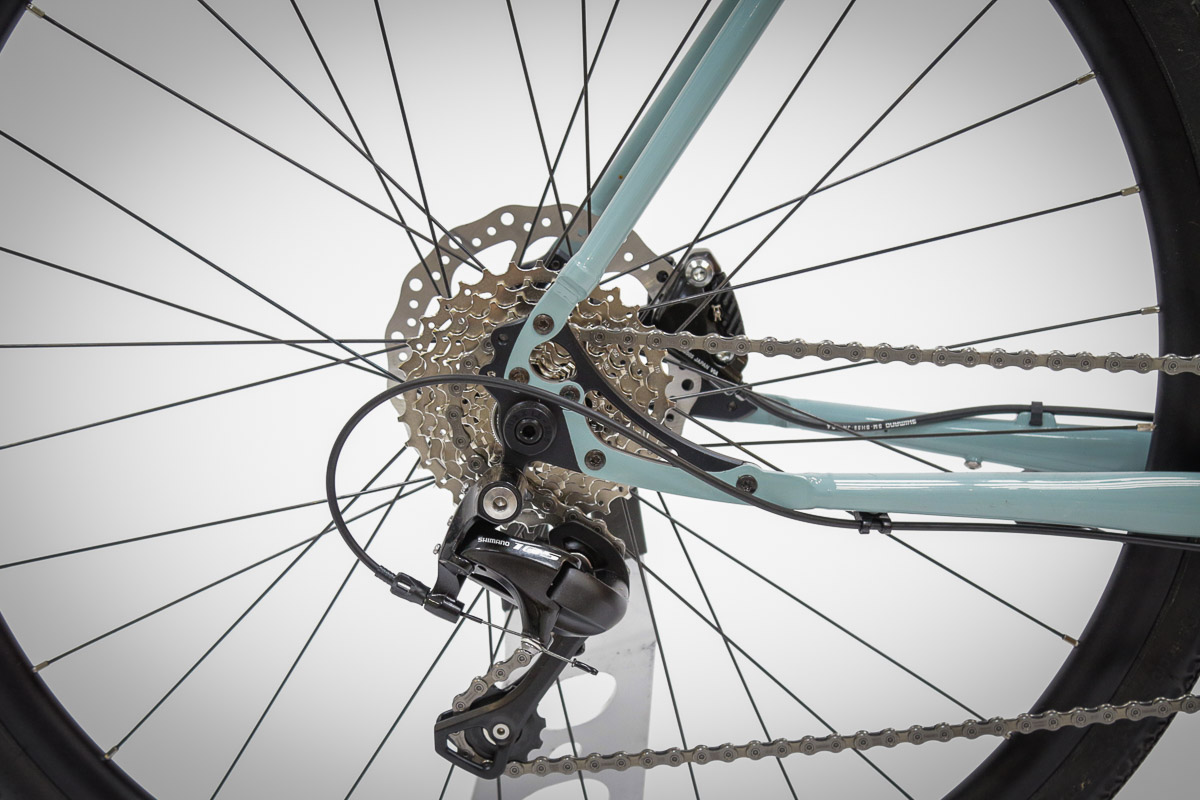 But bikes like the new Shug are 100% made up in Livingston along with Shand models like the new Tam 29+ expedition bike and the Stoater all-road bike. In case you’re wondering, the names of the Shand bikes are generally Scottish slang or nicknames, like the Stooshie which is apparently a bit of a fight. 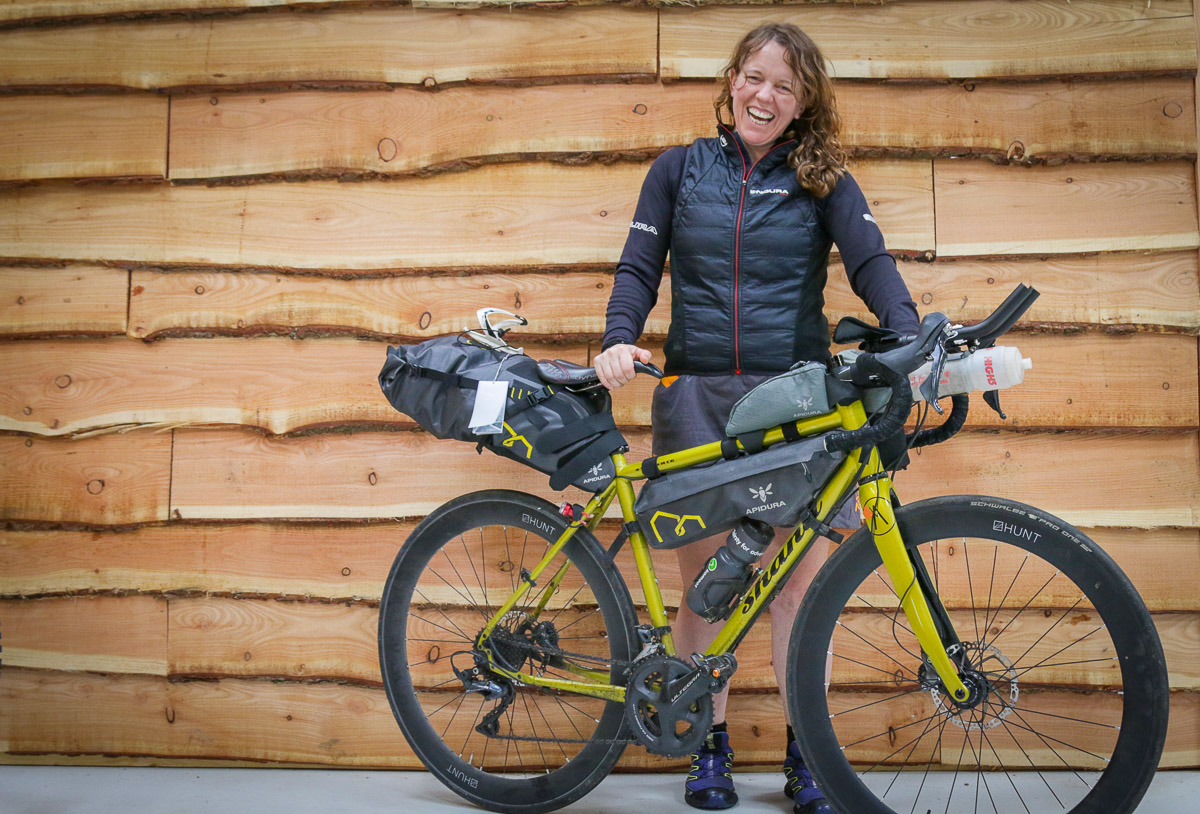 In addition to the two team members in Leamington Spa, there are just six employees of Shand in Livingston making it a pretty lean operation. But from what we’ve seen, the brand is thriving under the new ownership and from the sounds of things, they have some pretty exciting developments to come. Most importantly, it seems that Shand will continue to play a big role in the local Scottish riding scene and community. Twice on this trip, incredibly talented female members of the Adventure Syndicate showed up aboard their Shands. While at Shand headquarters, it was Jenny Graham who is getting read for her attempt at the around the world cycling speed record. Planning to set off a little more than two weeks from now, Jenny will ride through 15 countries over the course of 110 days. That schedule factors in only 10 rest days, which if she’s successful will be simply mind blowing. Good luck Jenny!

I envision that wire from the dynomo hub in the last pictures getting ripped out on the first stick she rides past, or it rubbing on the wheel after 20 miles.

Funny, I envision her riding around the world in 110 days while critical bike rumor people point out every fault possible to prove their cycling knowledge.