We recently had visited Unior in Slovenia to go behind the scenes to see how bike tools are still being made in Europe. In a time when so much production, whether bikes or accessories, has moved over to Asian producers who deliver the same quality at lower labor costs, it is refreshing to see real industry still occurring in Europe. And tool production is as industrial as you can get. Visiting Unior’s forging lines it was easy to understand they’ve been making tools there for close to a hundred years. While there were many examples of modern tech and automation, some scenes still made us think Industrial Revolution. Join us after the break for a rare look into the hot & cold forging factory where everything from automotive engine connecting rods to cycling cassette lockring tools are formed… Drop forging parts to make bike tools is something straight out of a Dickensian tale. It is steaming hot, seemingly dimly lit, and as loud as you could imagine. It is also interestingly not as archaic as it looks at first glance, even though Unior has been forging tools here since 1919. While a lot of Unior’s forged tool parts are manipulated through every step of the process by well-trained (and relatively well paid) hands, there are a few forges like this one in the foreground with its yellow cage where a robotic orange arm inside methodically & repeatedly turns hot chunks of metal into what will become precision tools down the line. But for the vast majority of the products that Unior forges (and that includes a lot of motor parts in everything from my Hyundai wagon to the Lamborghini), it remains more efficient to use human hands. It seems robots can’t easily match the ability of a skilled worker to adapt on the fly to variation and manipulate those glowing tool blanks as they are formed.

So rows of big old machines repeatedly slam down with several tons of force on molten pieces of steel that start out as cylindrical chunks of steel cut out of raw tool steel bar stock. 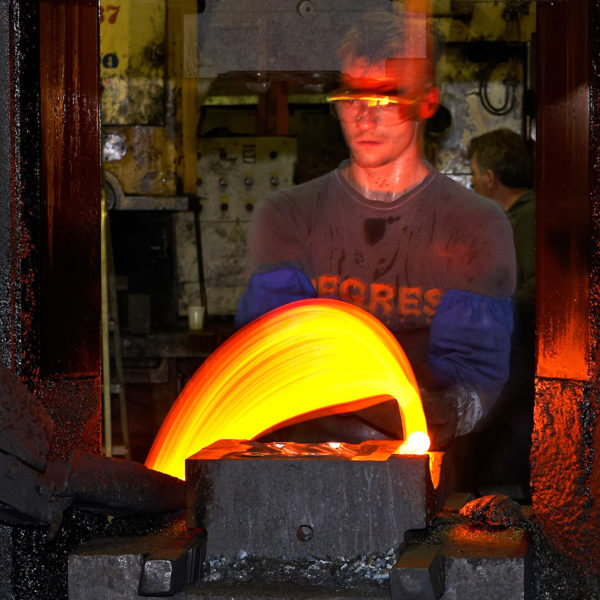 And with one second here – BAM – then a quick precise move of the glowing tool starting to take shape into the next more intricately machined mold – BAM – and then one more shift – BAM – before the shaped tool blank gets put aside to cool. And then the process is repeated, ad infinitum…

Even though it isn’t so clear here, all the workers have ear & eye protection through the process and wear heat-resistant gear. And it takes years of work before they get to man the forges. Still they can’t work the hot forge for long, and get rotated out in teams every 15 minutes or so to be able to make it through a full shift. Out of the forges come an almost innumerable supply of parts that will ultimately make their way to becoming finished tools. Everything from pliers to combination wrenches to bottle openers get forged here. For the most part these are all of the long flat tools that need the strength to survive a lifetime of acting as a lever against nuts & bolts. Out of the forge they come as raw dark steel parts with the inherent strength of having been shaped under high pressure & high temperature, but they’re still a long way from getting put to use working on bikes. Part of that post processing can be things like heat treatment, where parts of an overall tool – like the blade of this single arm of a wire cutter – gets heated up, so it can be cooled at a more controlled rate to create the precise balance of strength:brittleness, so it will survive years of cutting in a bike shop. Then off to be ground to a nice consistent finish. Sometimes it’s as low-tech as feeding a pair of pliers into a grinder by hand to get two flat parallel surfaces… Or it requires an extra step to get a nice conical taper. Then of course, why not program a robot to get the exact shape you want by rolling a set of pliers against a huge abrasive belt grinder. The end results are stacks of nicely forged, ground & polished tools waiting for their next steps. The same thing goes for boxes of flat wrenches. There is a lot less work after the forge, where the even get their size & name labels get stamped in. But they still all get racked up and the surfaces around their tooled precision ground for smooth operation over their lifetime of use. Cold forging starts with a similar concept. Take a small piece of metal, then hit it really hard with what is effectively a hammer, driving into a mold. This time the process happens more or less at room temperature, making it a more pleasant environment to work in (cooler and significantly less dirty, although no quieter.)

The parts tend to be smaller, with more precision coming out on the other side. Cold forged bike tools generally begin the forging process as smaller (less long) metal blanks, but undergo significantly higher pressures to get to their final shape without the benefit of being heated to a softened, glowing metal state first. The result though is a tool that can be shaped to have thin, precise elements like the spline ridges of a cassette lockring tool. It can then still withstand a life of use & abuse in a bike shop without really wearing, bending, or breaking. Little metal slugs come in… a worker gets everything nicely lined up… and another machine operator sees that up to 1200 tons of force come banging down on that little chunk of steel. In one quick operation the slug turns into a socket shape we can already begin to recognize with the 3/8″ drive set on one side. Next a a secondary operation is needed to output a properly sized socket interface on the other. With a fairly automated feed system, these cold forging machines can keep churning out piece after piece, averaging around one per second for small parts like this. Then once the get their final tooled surfaces in place, another worker can pop them onto this constantly spinning rotary grinder that turns out nicely polished sockets. While many of these tools that we saw being crafted in person are more general in application, they do cross over to the bike tools workshop. And the same processes turn raw chunks of metal into more bike shop specific items like hot forged pedal wrenches & cold forged bottom bracket cartridge tools. A surprising number of Unior Bike tools have slightly more humble beginnings, starting out as varying thicknesses of specialized tool steel plates. With the ability to use CAD software to nest parts and efficiently pack as many tools into a single sheet, laser cutting can be a fast & efficient way to cut out basic shapes to make tools that will see a bit less stress or leverage. Then heat treating (hardening & tempering) can go a long way to making them compete with forging for practicality, especially with thicker base plates. Some of the most simple laser cut tools might be a chain wear gauge out of a thin sheet, a bit thicker to start for a set of cone wrenches, and thicker still to make a truing fork for disc brake rotors.

But that’s only the beginning of how Unior Tool goes from raw steel to finished bike tools in their European factories. Drop forging, cold forging & laser cutting create the basic forms for the vast majority of the tools that Unior produces in-house, but there is plenty more work to be done in Unior’s Slovenia facilities before those tools are ready to head out to your local bike shop, or end up on our own personal workbench.

Stay tuned for Part 2 of our peek inside the Unior Tools factories. We’ll see how those European made tools get finished…

Thanks guys…….Very interesting. It is always fun to see how stuff is made.

That was great. Nice to see this long-lived Euro manufacturing company in the erra of mass Asian production. More like this please

It was going well up to the point “…1200 tons of force”. The ton is not the unit of force. Please, get the basics right or get a proof reader in who knows the basics.

Matthew
Reply to  Stephen B

No, the metric SI unit of force is the Newton.

That is defined as the default in high school physics, yes. In reality, kgf is far more common, and metric ton is a perfectly acceptable unit of force in the metric system.

Wuffles
Reply to  Stephen B

Ton is very much a unit of force…

KTS
Reply to  Stephen B

Tons are the Industry Wide Measure for Forge Presses regardless of the classical physics strict definitions.

Newton is SI unit of force. All the rest is Non-SI units of force: http://www.npl.co.uk/reference/faqs/si-unit-of-force