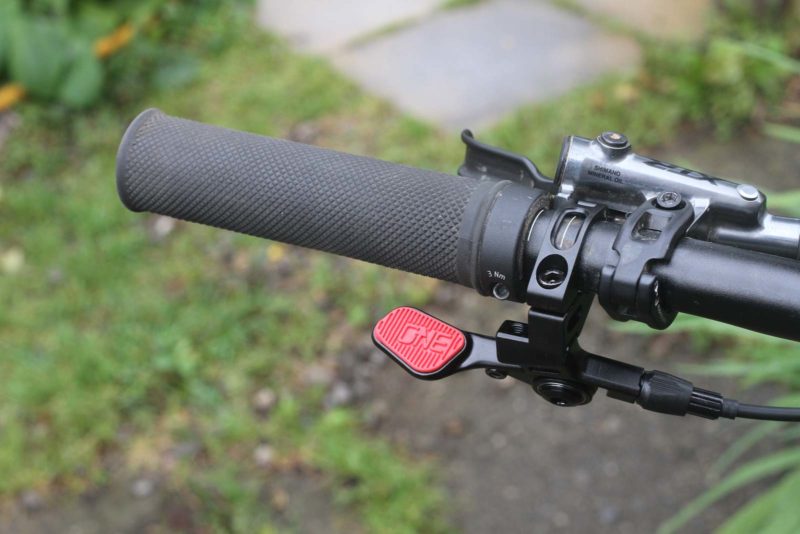 OneUp Components has introduced the V3 Dropper Remote, a lighter, more affordable iteration that is said to require 27% less actuation force than the V2. Compatible with any cable-operated mechanical dropper seat post on the market, the V3 Dropper Remote will be a viable upgrade for a large contingent of riders and it can be color-matched to the bike with seven different colors of lever thumb pad to choose from. Mine turned up this morning, so I quickly hooked it up to a Fox Transfer Dropper Post.

At 29g without a clamp, the OneUp V3 Dropper Remote is a whole 4g lighter than the V2! But, that’s not really the news here, is it. It’s easier to push the lever, and thus pull the cable to actuate the dropper, and you can swap out the thumb pad for whatever color takes your fancy.

I’ve been running the V2 Dropper Remote for almost three years, having carried it with me from my Trek Slash, to my Cannondale Jekyll, and now to my Revel Rail. That’s three missed opportunities to color coordinate my dropper remote with my bike. The V3 Dropper’s thumb pad simply pops out, so you can switch it for whatever color best matches your new bike for just $6 USD. 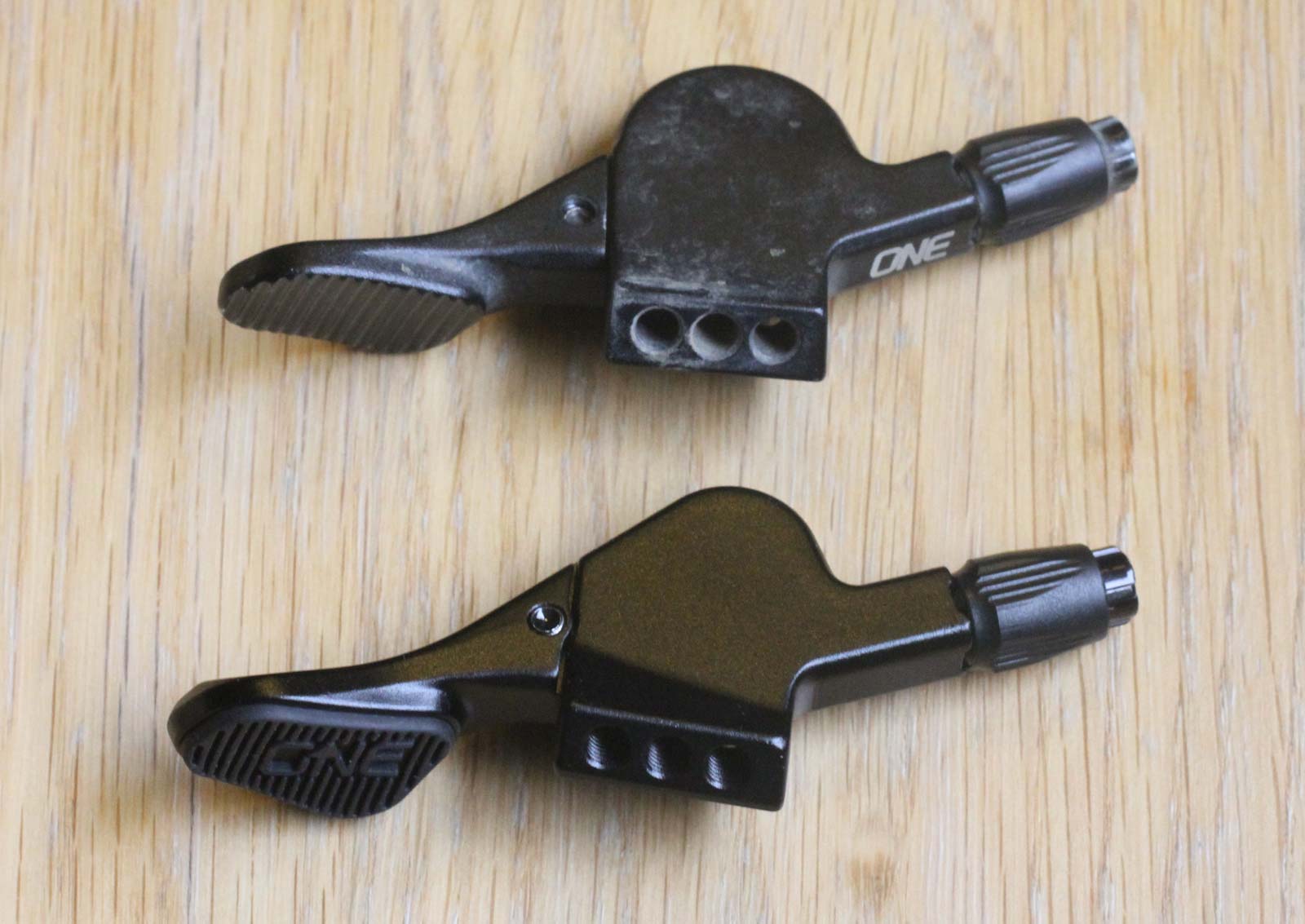 What I loved about the V2 Dropper Remote was its smooth, easy actuation, and the fact that it’s been super durable and reliable. That’s thanks to the bearing it pivots on, which is pretty massive for a dropper remote. Three years on, it is very, very notchy, as I’ve never actually replaced the bearing or re-greased it, but it still works just fine. 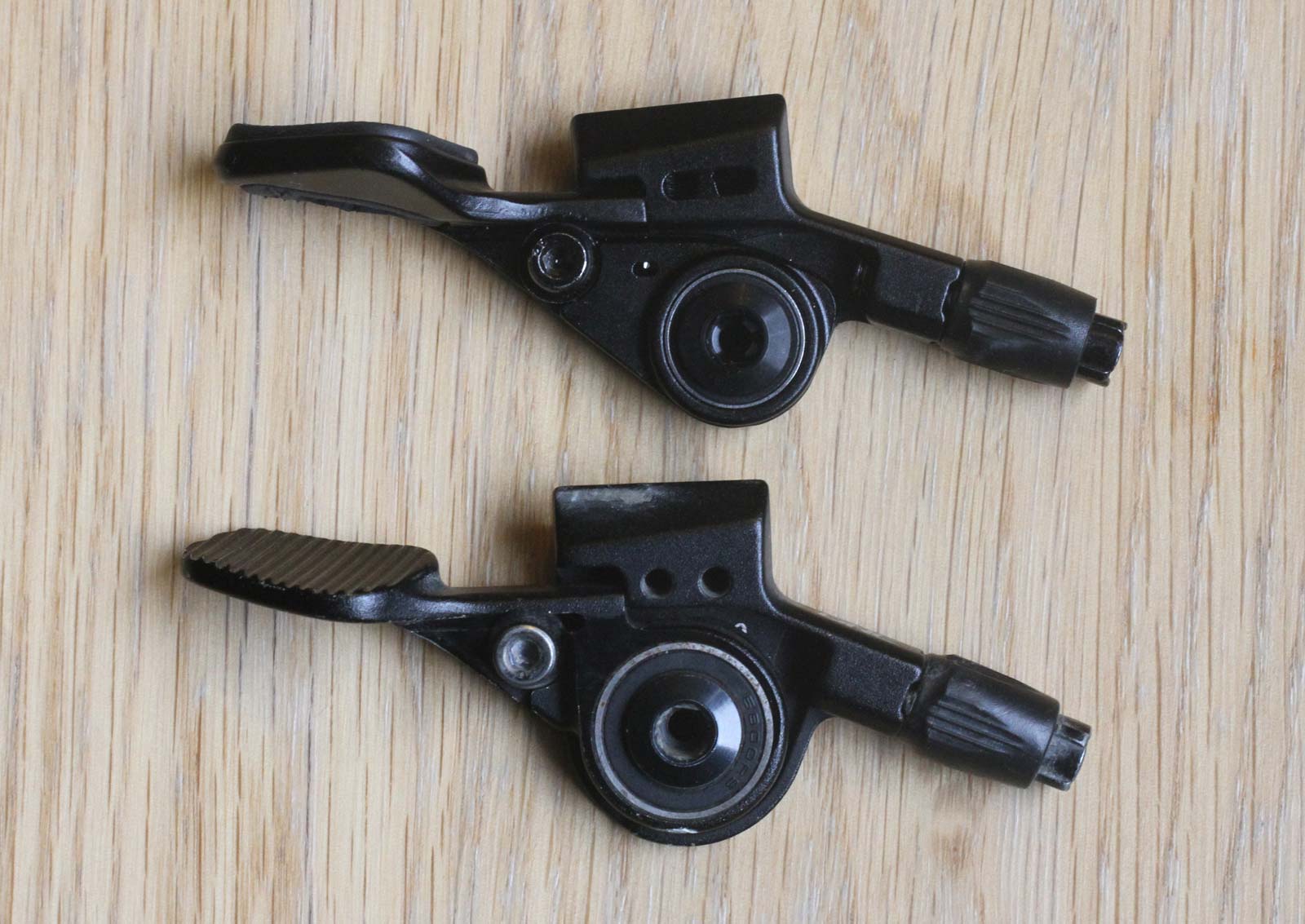 A side-by-side comparison of the V2 and V3 dropper remotes shows us that bearing the lever pivots on is a lot smaller than that of the V2. That said, it’s still quite big by dropper remote standards. We wonder how its longevity will compare to that of the V2. We’re waiting to find out if the bearing is replaceable.

On that point, OneUp tells us, “the bearing in the previous version (V2) was actually bigger than it needed to be, so the new smaller size bearing on V3 is still more than adequate”. 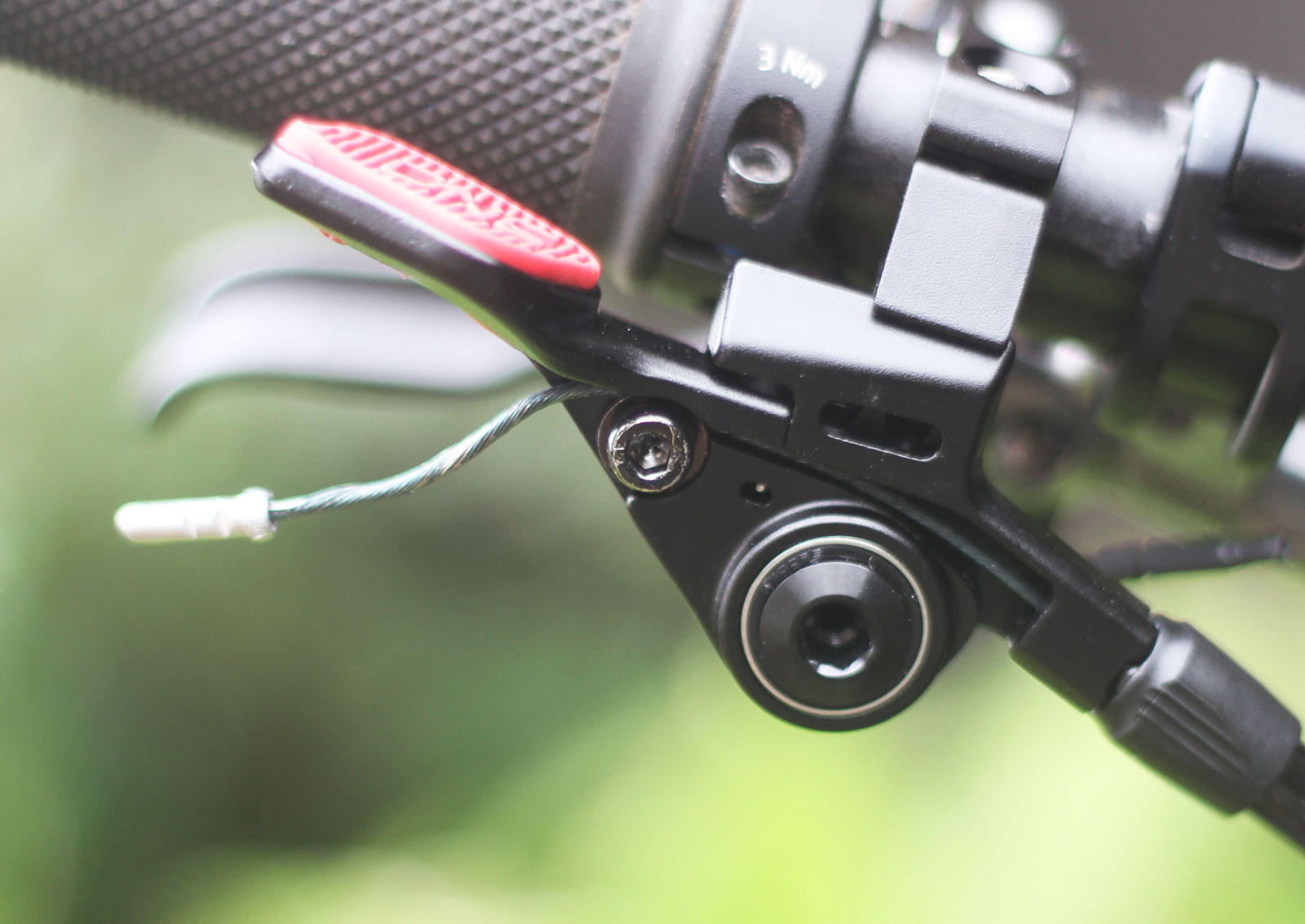 The shape of the remote is quite different, too. Despite the smaller bearing, the shape of the cam near where the cable enters the remote means it produces more leverage throughout the stroke than the V3. This is said to account for it requiring 27% less force to actuate than the V2.

So, how the OneUp V3 Dropper Remote feel? 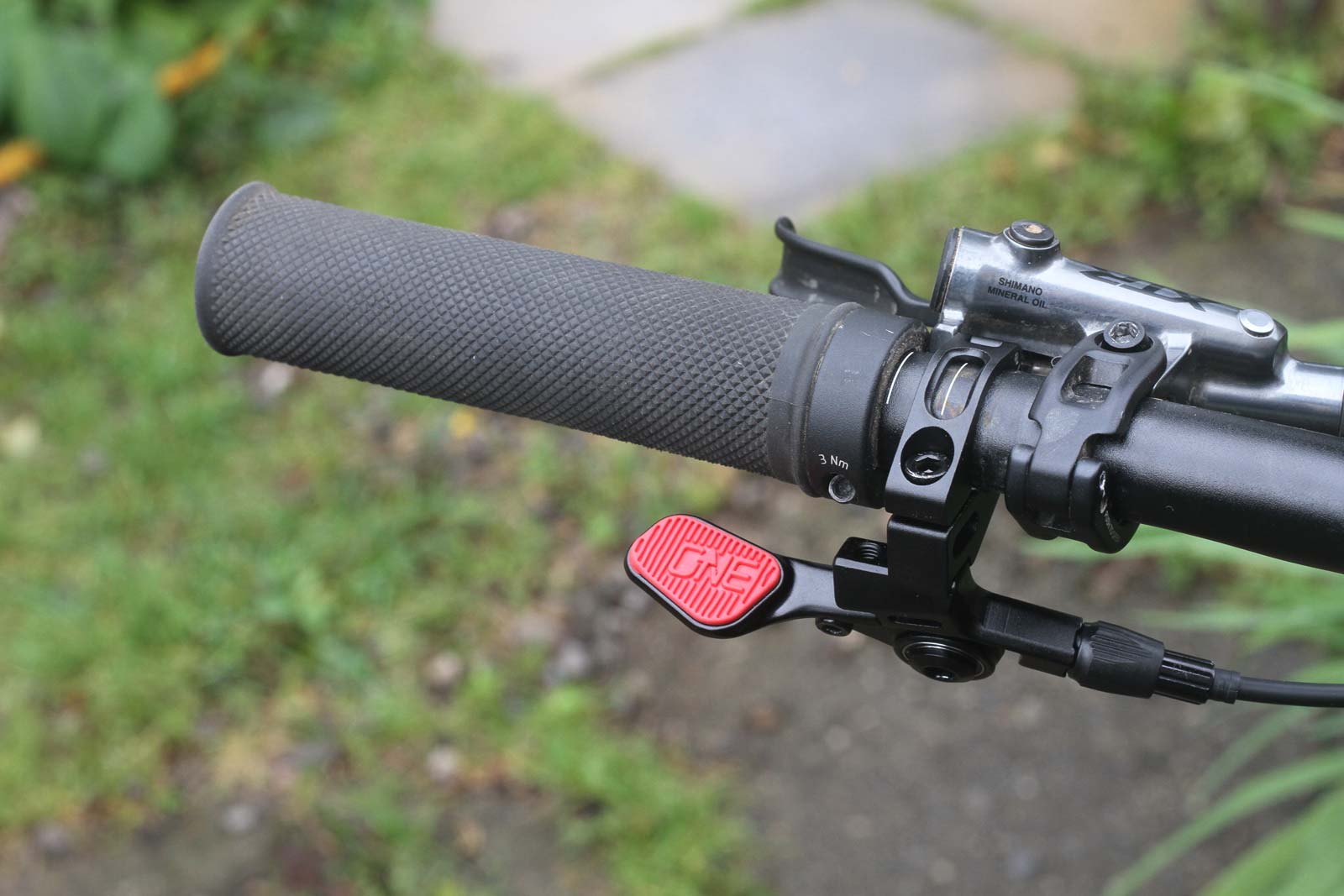 I’ve retired the stock Shimano remote that was hooked up to a Fox Transfer dropper, switching it out for the OneUp V3 Dropper Remote. I would say it is as smooth as that stock remote, but it’s hard to say anything more than that. It’s super easy to push, and has a far superior feel to it than the Brand-X Ascend Lever – I pick on that one because it is the cheapest dropper remote on the market. 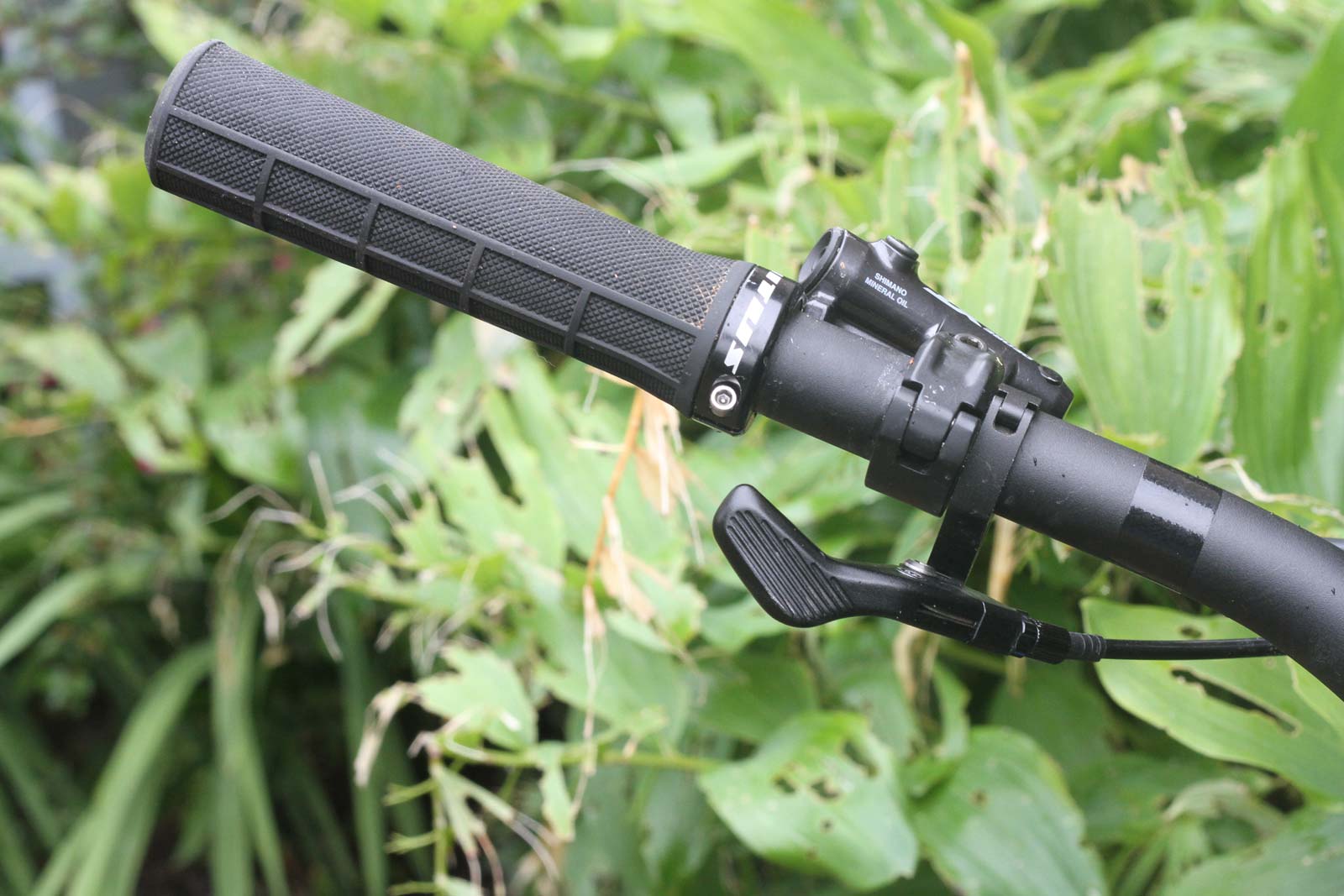 The Ascend Lever retails at £22.49, almost half the price of the OneUp V3 Dropper Remote which retails at £40. To be fair, though, the latter is probably twice as good. That’s owing not only to the fact that it requires less force to push, but the task of installing it is much simpler because the cable takes a much less convoluted, fiddly path through to where it is clamped. There’s also no lateral play to speak of – something the Ascend Lever suffers from – and the thumb pad offers far better grip for when you need to slam your post in a hurry – the Ascend Lever can be slippery when wet, while the textured pad of the OneUp V3 Dropper Remote looks like it should offer good purchase in all conditions. 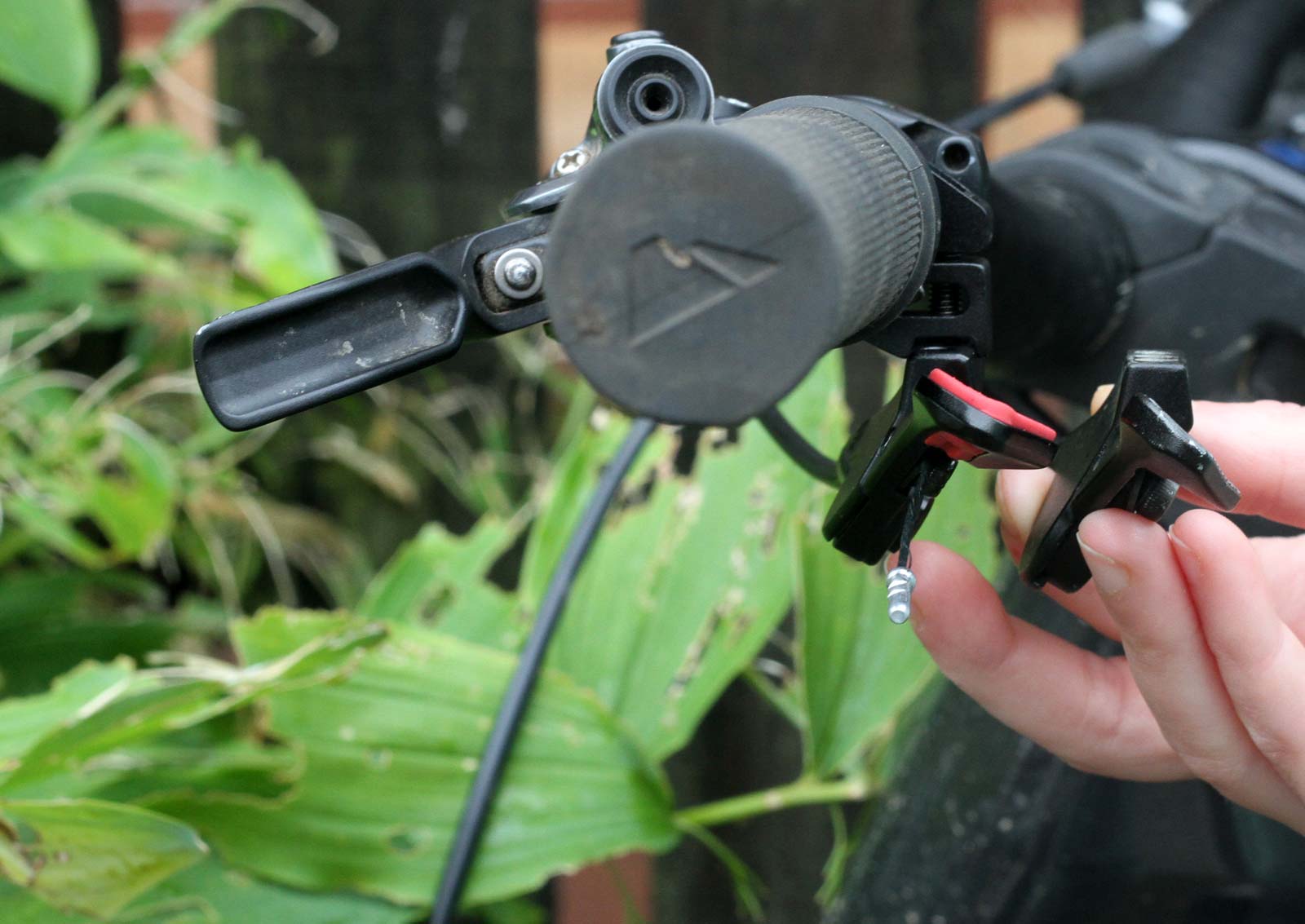 Hard to say how much smoother the V3 is as compared to the V2, given that my V2 remote is need of some TLC. The two have the same lever sweep. 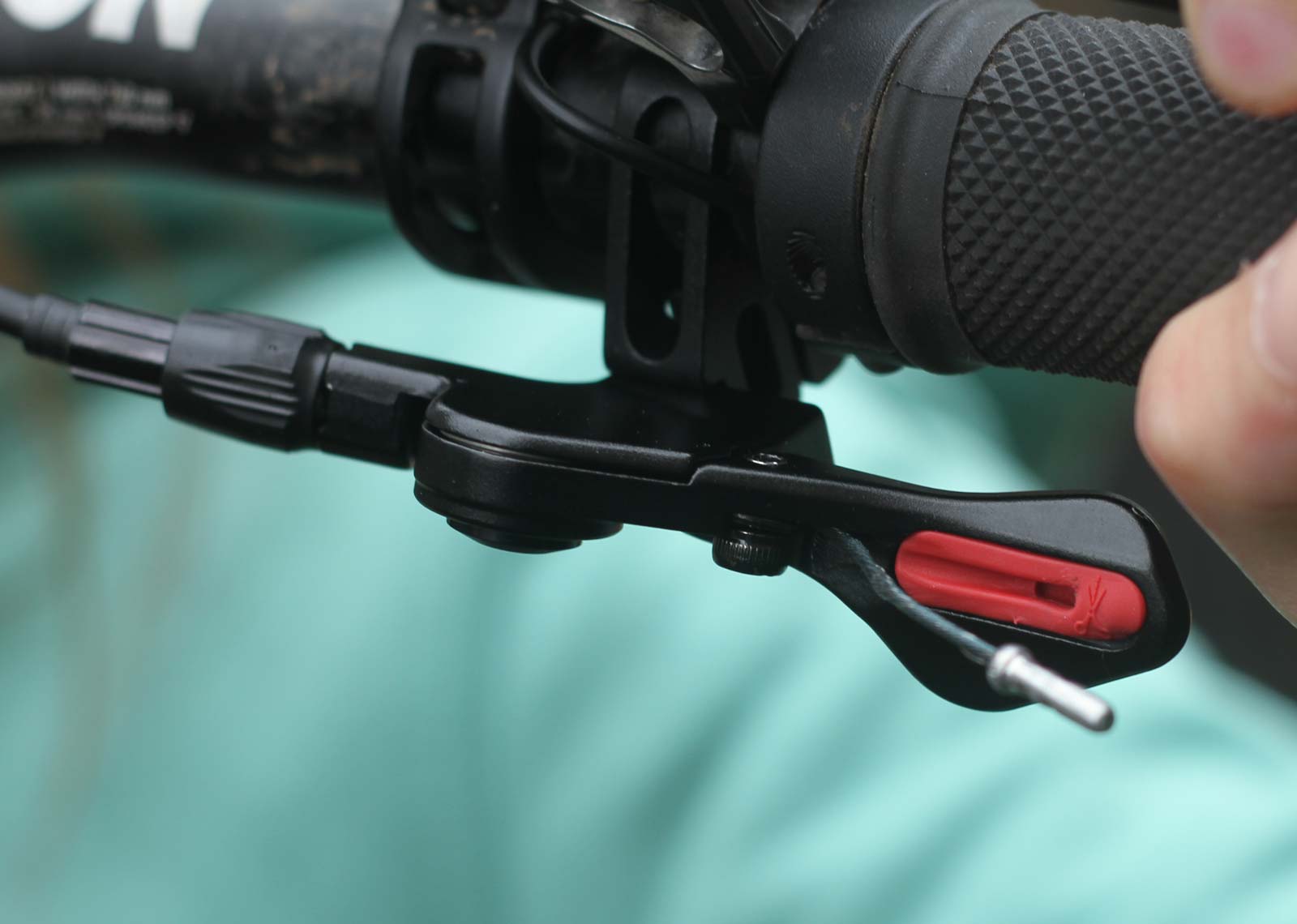 The V3 Dropper Remote is shipped with a cable-end crimp, but if you don’t have one when it comes to changing the cable for a fresh one, you can always tuck it up inside the backside of the rubber thumb pad, out of the way where it can’t pierce your skin

The OneUp V3 Dropper Remote retails at $45 USD (£40) with the black thumb pad. It’s an extra $6 USD if you want one of the other colors. The remote is compatible with a regular 22.2mm clamp, as well as SRAM Matchmaker X, Shimano I-spec-EV and Shimano I-spec II, all of which are sold separately at $14.50 USD.

i recently put a oneup dropper on my rail with the brand x remote and it required more pressure to actuate than i was use to, so in came an anodized purple light action remote from wolf tooth, problem solved. If the one up had been available that would have made much more sense as it is cheaper….uh wait it’s almost the same as you have to buy the clamp, still it looks good