“We’re riding from here?” It’s always a good sign when you show up to a new country to ride bikes, and that’s the response from one of the locals with wide eyes when we hear of the ride plans. As it turns out, there’s a fair bit of climbing around Sintra, Portugal, but it was completely worth it as the scenery and trails were amazing. But more importantly, it provided a great chance to get to know the new Canyon Neuron CF. Billed as an aggressive XC or Trail bike, the Neuron CF occupies an interesting place in the Canyon lineup. Really, an interesting place in all of the mountain bikes currently available. You see, while a lot of riders may aspire to be aggressive rippers sending big jumps and manualing out of corners, in reality that’s a very small percentage of the riding population. There’s a bigger chunk of riders out there who are more content with cruising their local trails all day long, or tackling epic back country adventures rather than smashing the local enduro tracks. And that is the population that the Neuron CF is geared towards.

While so many bikes are going with extremely long reach numbers, slack head tubes and steep seat tubes, the Neuron CF takes it back a notch. It’s still long enough to be considered a modern trail bike, but at 433mm for the reach on a medium, the slightly longer 60mm stem is appreciated. And so is the 74.5° seat tube angle – this is a bike that excels at climbing, so the steep but not insanely steep STA helps keep your weight forward when the trail pitches up. As it turns out, Sintra is full of steep roads and trails which guaranteed us an extensive climbing experience on the Neuron CF. Starting at the base camp on the western edge of Colares, we started the long climb up to the mountains of Sintra. After each long climb we were treated to some incredible forested single track descents that reminded me of the trails near Santa Cruz, CA. Mid ride, we stopped at the Refugio do Ciclista for an infusion of grilled meats, wine and 7up, olives, cheese, and espresso. It was easily one of the heaviest meals I’ve ever been treated to mid-ride, but I felt surprisingly good afterwards – probably due to the long, sustained climb after lunch to burn it off. This would be the final climb of the day, up and over the highest point, and then dropping all the way down to the ocean below on an exposed, rocky trail through a recent burn zone. I was lucky enough to do this ride twice, and both days were about 18 miles with 4,300′ of climbing! Yeah, we got a lot of time to see how the Neuron CF climbs – quite well. We were all riding the Neuron CF 9.0 SL which meant each were equipped with a Fox Performance Float DPS LV rear shock. The Neuron CF is efficient enough that on everything but the steepest paved fire roads, I kept it in the Open mode. Every once in a while I switched it to the Medium mode which firmed things up quite a bit. The Firm mode might be useful for extended road rides, but it was really too firm for any off road use. In fact, the recommended suspension tune as a whole was too firm for my liking. Canyon provided cards with suggested shock pressure based on your body weight, and at about 71kg with gear, I should have been running 185-215 psi in the shock according to the chart. I ended up riding close to body weight with 155-160 psi providing my ideal level of sag and suspension performance. The mid stroke is so supportive and the end stroke is progressive enough that the lower pressure seemed to be necessary to make use of the entire travel – though individual results may vary. Fortunately, tuning this is as easy as letting out or adding air to the shock and by the second ride, my bike was dialed – with one exception. Really, my only disappointment with the Neuron CF comes in the length of the seat tube on the medium frame. At 5’8″ with a 690mm saddle to BB measurement, I’m almost always on the smaller end of a medium frame. A few years ago, this meant that I was often not able to make use of a 150mm dropper post – just like on the Neuron CF here. The minimum saddle height with the stock 150mm post is 700mm, 10mm more than I can use. Moving to a small would mean that I would downgrade from 29″ wheels to 27.5″ wheels which isn’t something I want to do at this point, but more importantly, the rest of the bike’s geometry fits me well. Based on the number of medium bikes I’ve ridden lately that fit 150mm or even 160mm posts for my saddle height, this seems like it could have been improved, but since this is an XC/Trail bike, you could get away with slightly less saddle drop.

While I would have preferred a slightly shorter seat tube (especially since it protrudes a good bit from the top tube), this wouldn’t be a deal breaker for this bike. Ultimately, I would just swap out the seat post for a 125mm or something like the new OneUp Dropper Post which allows you to shorten the travel to exactly the amount needed – in this case, 140mm (Canyon is also considering the option of allowing you to select a shorter dropper when ordering the bike). There’s also the possibility that going to a shorter saddle may free up some needed space – the stock Canyon saddle has a pretty tall height from the rails to the top which exaggerates the issue. While Canyon repeated told us that we were all probably more advanced than the target consumer for this bike, that didn’t mean it wasn’t super fun to rally down Sintra’s trails. Realistically, we were pushing the bike past its intended use, while riding trails like Kamikazes. But once the suspension was dialed the bike never felt like it was over its head. 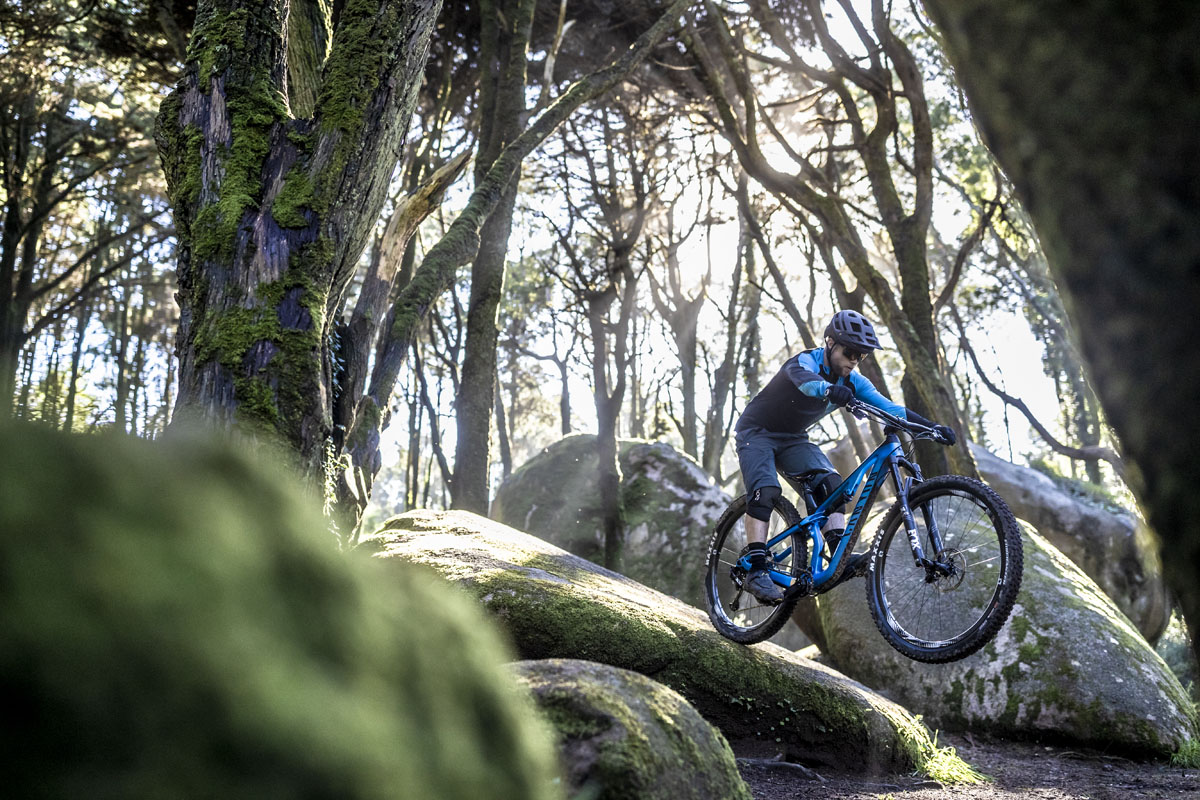 Even with the wagon wheels and slightly longer 440mm chainstays, the Neuron CF was playful and nimble, happily lifting the front wheel off small drops. At speed, the Neuron CF is laser sharp, offering plenty of stiffness throughout the chassis to hold your line. This is even more impressive when you consider the fact that the shock extension is basically carbon reinforced engineered plastic. It doesn’t seem like it should work, but it absolutely does. While I was wearing a pack for this ride, I greatly appreciate the fact that all frame sizes have a water bottle cage mount in the front triangle. At home, I likely wouldn’t be riding a pack on most rides which makes having a spot for a bottle a necessity. I love the idea of the Bearing Concept that provides addition protection from the elements, but the pre-production bikes we rode proved that some of the covers need a bit more work. A number of us lost the smallest round covers during the ride, but this should be a pretty easy fix for production. Otherwise, the concept of shielding all of the bearings to make the bike easier to clean and improve the durability of the bearings seems like a smart idea. I also appreciate the bolt on chainstay protectors and cable tunnel – though the hard plastic design seems like it may be a bit louder than some other designs. A few times during the ride it sounded like something was loose in the frame but I think it was either the sound of the chain hitting the guards, or rocks hitting the hollow down tube protector. It was a pretty rare occurrence though – and only when you’re really pushing the bike through rough terrain. For the most part I’ve been opposed to steering stops due to the added complexity, specific stems, and problems with other systems I’ve encountered. But Canyon’s Impact Protection Unit may have changed my mind. The system doesn’t require a specific stem since the winged stop collar bolts onto the steerer tube after the headset has been preloaded. And the design allows more turning radius since it’s not there to stop the fork from hitting the down tube – it’s there to stop the shifters and brake levers from hitting the top tube in a big crash (or just while loading the bike in a van, etc). Overall, the Neuron CF seems to accomplish exactly what it set out to do – offer a well rounded bike that is capable for all day epics. This isn’t going to be the bike to choose if you’re constantly chasing Strava KOMs on the downhill sections, but it seems to fill the void of a modern trail bike that isn’t overly aggressive. This bike is more than capable enough for the vast majority of riders, but it doesn’t require you to ride at the leading edge to make it work. In the end, the Neuron CF is an efficient trail bike with great looks, confident geometry, and some smart features that should make it an easy contender in the world of XC/Trail rigs.

Looks like a really good Jack of all trades bike that will suit most riders in most terrain. Here in the Midwest a 130/120mm trail bike is a “big bike”. I have one, and I love it. But I put most of my miles down riding a 100/100mm Cross Country bike. It’s perfect for 95% of 90% of the trails. Especially if you’re looking to go fast. I see a TON of people around here with way, way, way too much bike for the terrain. I have to shake my head when I’m flying past people on 150mm bikes on my Cross Country bike. Or worse yet, my full rigid 29+ SS.

Between the Tallboy and the 5010. Says something about the huge hole in their lineup that SC had two bikes in the gap Canyon had between their Lux and Spectral.

Curious as to how close this is to the Stumpy ST……….That’s on my short list for the my next full suspension bike.

I would just go to Sintra and try out many restaurants.
Why ride when you can eat?
The Sintra area is very beautiful, it is an easy train ride from Lisboa and the Castelo dos Mouros is very much worth a visit. (The Peña Castle, on the other hand, is not worth a visit, in my opinion.)
Of course, I am a tad older than the riders in the article.

Cool to see you testing that bike on a trail I built (Home) 2 years ago.

I have rented in Lisbon a CANYON Strive on a Official partner Shop and rode in Sintra (40min by train). It was an amazing day to keep in mind for life. The bike was in perfect condition and the trails was given at the rental station by Komoot app. Simple and wonderful!

Thanks guys for the article. You make my day remember how Beautiful it is Sintra.