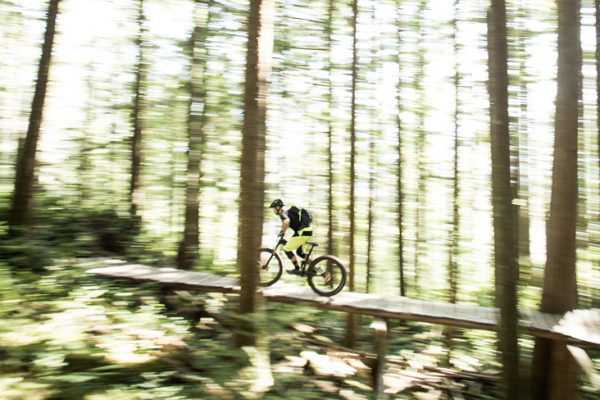 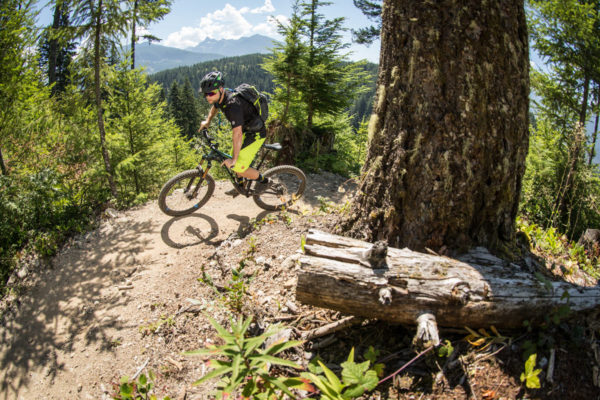 Since their introduction, Kona’s Process line has been a hit. The Combination of their Rocker Independent suspension system and competent spec and geometry won over riders who were fans of durable, relatively simple bikes that offered a great ride. However, riders wanting less travel and a more XC oriented ride were directed to the Hei Hei line which on its reintroduction not to long ago was completely focused on 29″ wheels. With both Race and DL options, the Hei Hei proved itself to be a versatile bike, but for fans of “Canadian Cross Country,” there was still a void left by the absence of 27.5″ wheels.

Enter the 2017 Hei Hei line up with more options than ever. Offering both 27.5″ and 29″ wheeled bikes, the new Hei Hei Trail shrinks down the wheels and bulks up on the travel to create an incredibly fun bike that still defies categorization. Is it an XC bike? Is it a trail bike? Yes… 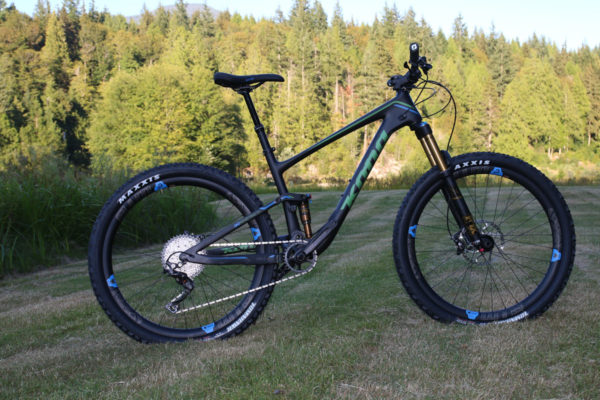 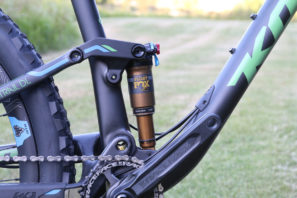 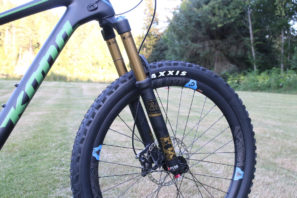 Even though the Hei Hei Trail shares the same DNA as the 29″ versions, the two turn out to be very different bikes. The Trails still use the same Fuse suspension platform with a rear flex stay, but the travel has been bumped up to a more trail-worthy 140mm compared to the previous 100mm. Kona says that in spite of the longer travel, the seatstays still only see about 2.67º of flex which works out to about 19mm of change at the end of the stay. The point being that they are only forced to flex a small amount and that the carbon layup is specifically designed for the task. Kona also points out that this is their first trunion based shock mount which is capable of running Metric sizing at 165 x 45mm.

Our test rig for the day was the new $5,999 Hei Hei Trail DL which offers a full Fox Factory Kashima suspension with a 34 Float Air Boost fork and a Float DPS rear shock. 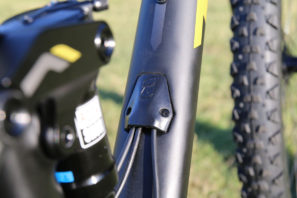 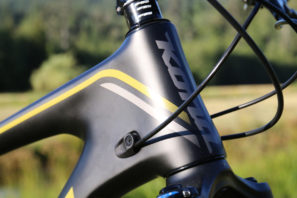 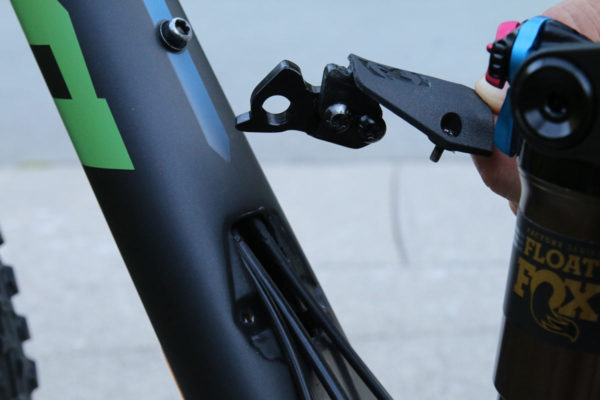 Available in three versions, all with carbon frames, the Hei Hei Trail uses full internal routing with an impressive cable management system. Not only does the system offer large entry and exit ports, but they also include grooves and bolt on covers to keep everything in place. Kona gets bonus points for even including a spare derailleur hanger that is stashed inside the frame and attached to the downtube cable port cover. 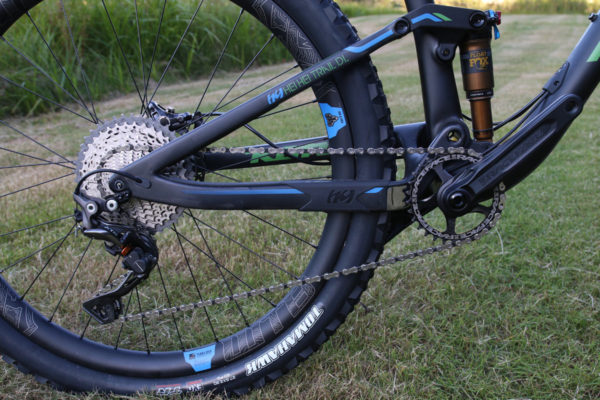 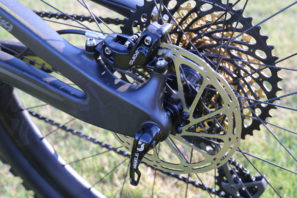 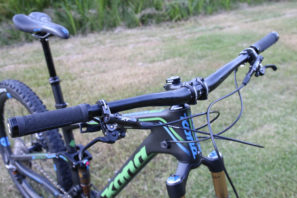 All three builds use a 1x drivetrain with the lower two running 1×11 with Shimano drivetrains and RaceFace Aeffect cranks and 30t narrow wide rings. The DL is a fairly impressive build with WTB Ci31 TCS carbon rims laced to Hope Pro 4 hubs, a Kona XC/BC 35mm bar and stem, and KS Lev Integra dropper with Southpaw lever – not to mention the Shimano XT/XTR drivetrain and XT brakes. 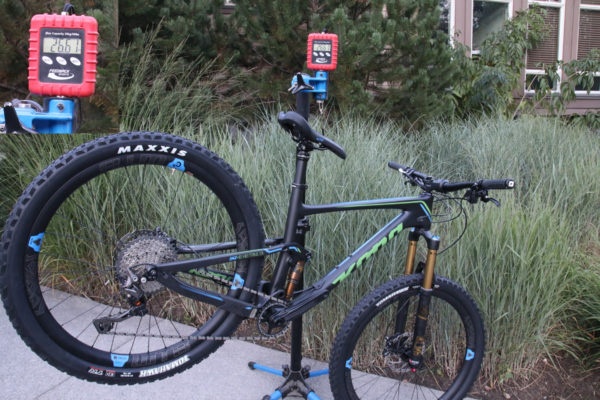 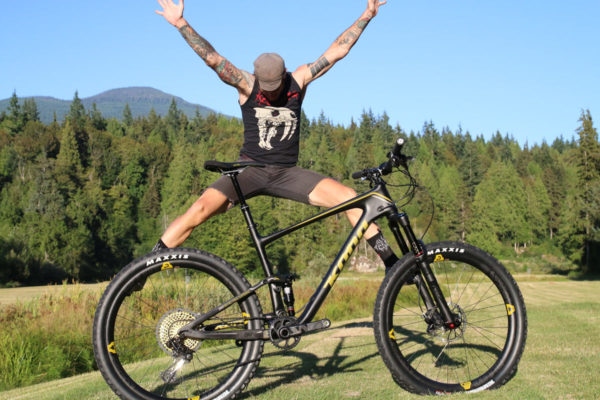 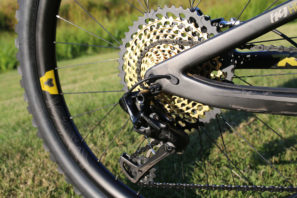 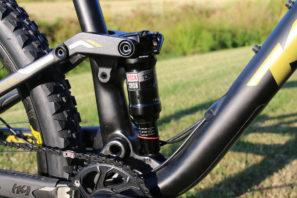 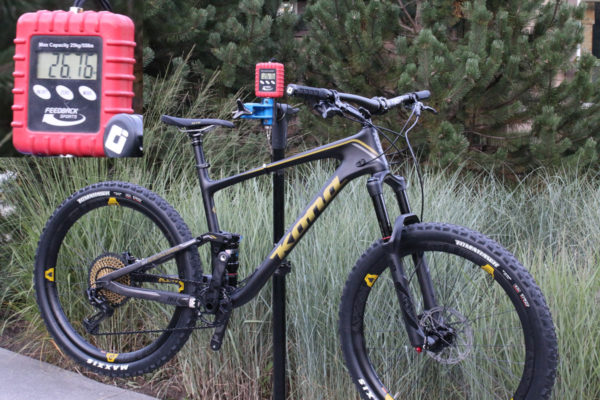 There is even a high zoot Trail Supreme version (enthusiastic Watts not included) which ups the bling factor with SRAM Eagle XX1 and RockShox suspension with a Deluxe RT3  Metric rear shock. One size up from the Hei Hei Trail DL, the Trail Supreme was actually heavier – though it sort of makes sense with a larger 34t chainring, a huge 12 speed cassette, and different suspension. 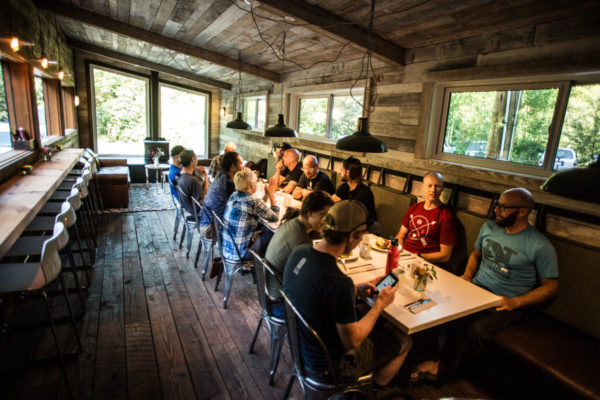 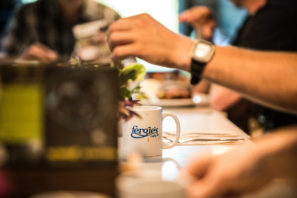 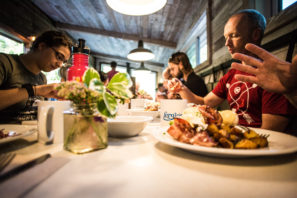 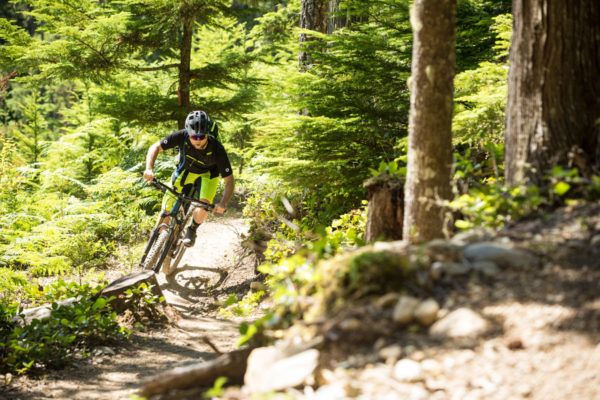 For our first day of riding in the mountain bike playground known as Squamish, BC, Kona filled us up with an incredible breakfast from Fergie’s cafe, and prepped us on the bikes before hitting the trails. The climb up the aptly named Climbing Trail provided plenty of opportunity to get to know the pedaling characteristics of the Hei Hei Trail DL. Whether it was the bike, or the fact that we weren’t at altitude and I was used to the heat and humidity, I was feeling surprisingly strong. Playing around with different suspension settings yielded a bike that was quite planted while climbing and highlighted the bike’s XC roots. 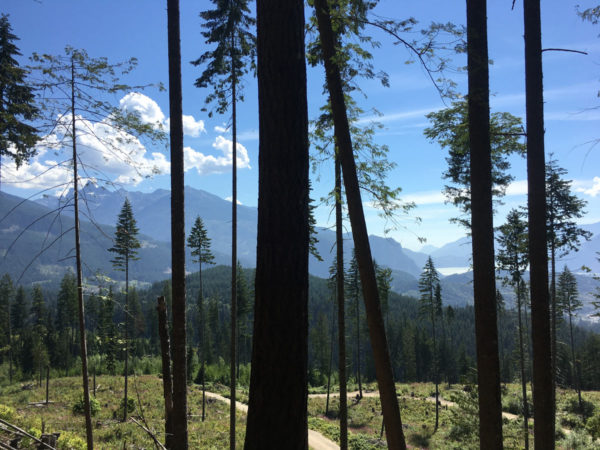 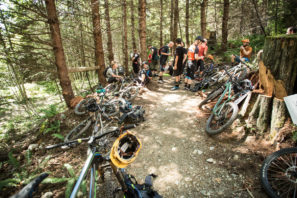 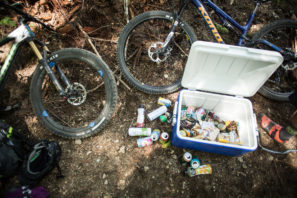 After an hour or two, we had reached the top. Well, at least what would be the top for our ride. Squamish might be at sea level, but if you want to ride you have to climb – though the Climbing trail is beautifully constructed and never feels too steep. Refueling at the top meant breaking out the hidden cooler, hitting the refresh button, and padding up to blast back down to the bottom. This is, after all, Canadian XC – which is apparently the best XC. 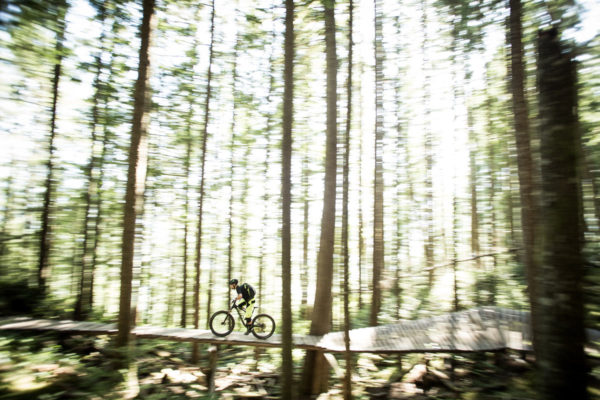 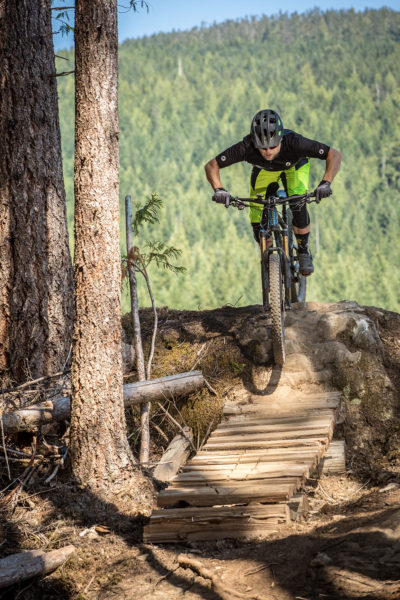 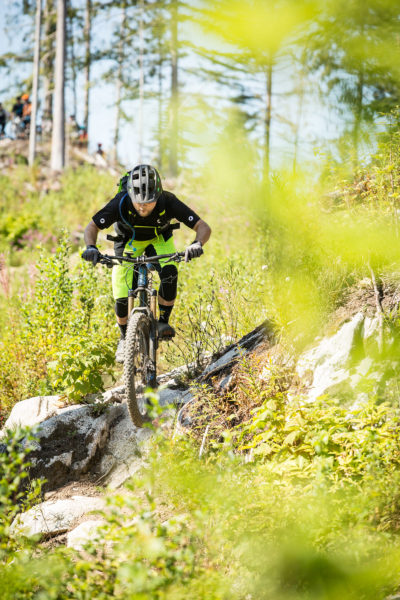 Winding our way down from the top, the ride included Squamish favorites like Full Nelson, Fred, Tinder, and even Your Mom. That meant a solid assortment of jumps, small North Shore features, and plenty of berms and rocks to put the Hei Hei Trail DL through its paces. 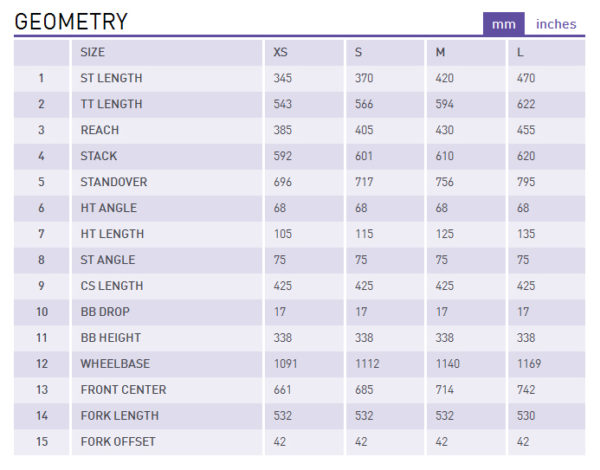 Available in four sizes, I was on the medium which I found to fit quite well – even the ability to run a 150mm dropper post, which isn’t always the case. Built around a 68º HTA and possessing a fairly modern reach measurement with 425mm chainstays, the geometry is right in there between XC and Trail. 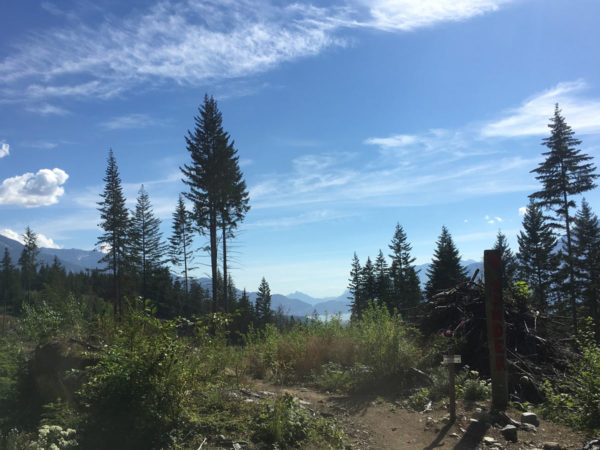 While I’m fairly certain that riding almost any bike in a place as magical as Squamish would leave you with a positive impression of it, the Hei Hei was definitely in its element. Don’t let the Hei Hei lineage or the Canadian XC nomenclature fool you, this is not your average XC machine. It would probably be more apt to call it a trail bike, but it’s still a bike that you could race one day, and rip North Shore trails the next. As Caleb’s son Elliot proved, this bike is capable of far bigger jumps and stunts than most riders would ever contemplate, yet it climbs incredibly well. So well in fact, that the climbing is the distinguishing feature between it and the Process 134. Both are very capable and great pedalers, but if you’re looking for an XC bike that isn’t afraid of the ‘Shore, let the Hei Hei Trail be your guide.

The geo and weight are def not XC.

What’s the largest width of rear tire that will fit on that frame?

Pretty sure that Fox shock is/has “Metric” too. Are we using “Metric” now as a marketing term? WTF?

@Ripnshread well, yes. They’ve run out or done everything else and this might confuse those that have yet to be confused. Confused?

I was confused when I saw the word metric capitalized as in “Metric” which, I assume is not the same word as the aforementioned “metric” that I used, since, unless it’s meaning has been twisted or abducted by a marketing team to a surname or copyrighted (I’m taking “Standard”) then it should never be capitalized.

Yes, there is a new shock sizing, or standard if you will, called Metric. It seemed like it should be capitalized in order to try and reduce confusion. Metric shock sizing is not the same as simply converting the imperial measurement on your current shock to millimeters. When the standard was announced, Fox was not listed as a partner (Cane Creek, Manitou, DVO, SR Suntour, RockShox, and X-Fusion were part of the original announcement), so I am assuming the . The biggest difference between standard and Metric shocks seems to be a longer overall length for the same stroke. Most bikes won’t be able to use both shock sizes, . I’ll see if I can confirm with Kona. More info here.

What’s the point of metric shock when it’s stroke is shorter than other bikes of similar travel with non-metric shock?

@Marin, we’ve been told by RockShox specifically, that it allows for more bushing overlap for better durability and performance as well as more room inside the shock body.

I know that but it’s RS’ problem and Fox doesn’t have this issue.

According to Kona, I was wrong on the Fox Shock. They state that all of the Hei Hei Trail models use Trunion mounted Metric shocks. Waiting on confirmation from Fox.

Zach, how tall are you? Asking since you were riding a medium.

5’8″, 30″ inseam. I’m usually on the big side of smalls, small side of mediums, but prefer the longer top tube most mediums provide.

Zach, if it makes a difference, I checked my height, which I haven’t done in many years, and I am actually 5’ 9.5”.