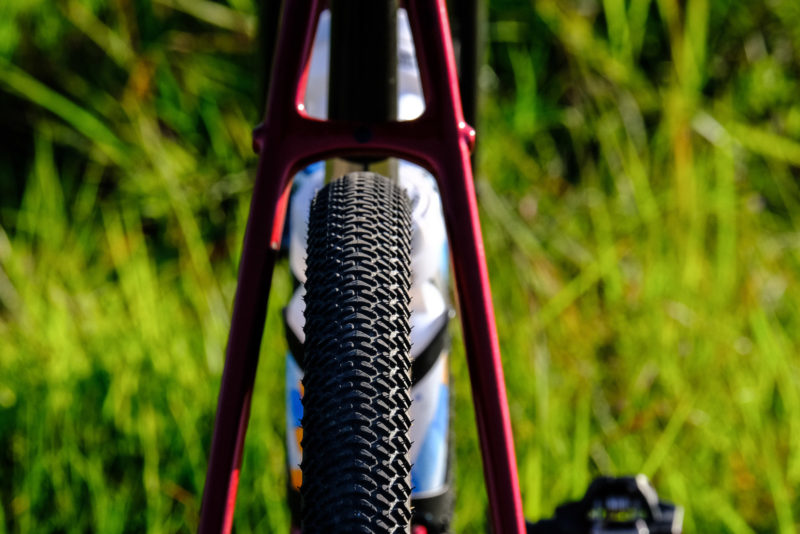 The G-One gravel tire lineup just grew by one, adding a dedicated race tire to the multi-surface lineup. The new G-One R promises plenty of cornering grip in most conditions and a super-smooth ride. All in a light, tubeless-easy package.

That is, of course, what just about every tire promises. The question is whether the G-One R can deliver. Given its lineage, the G-One R is starting from good stock. The G-One Allround has become a favorite among gravel aficionados for its fast-rolling tread and grip. So building off that knowledge, Schwalbe hopes to appeal more to racers like the ones who flocked to Unbound Gravel in Emporia, Kansas this past weekend.

And that’s exactly where I’m typing from. There seems no better place to test a gravel race tire than the home of the biggest gravel race out there. The Flint Hills offer a mix of sharp rocks, loose corners, and big ruts. If the weather gods feel like having a bit of fun, mud may be on the menu. (But it wasn’t during my visit, fortunately for me!) 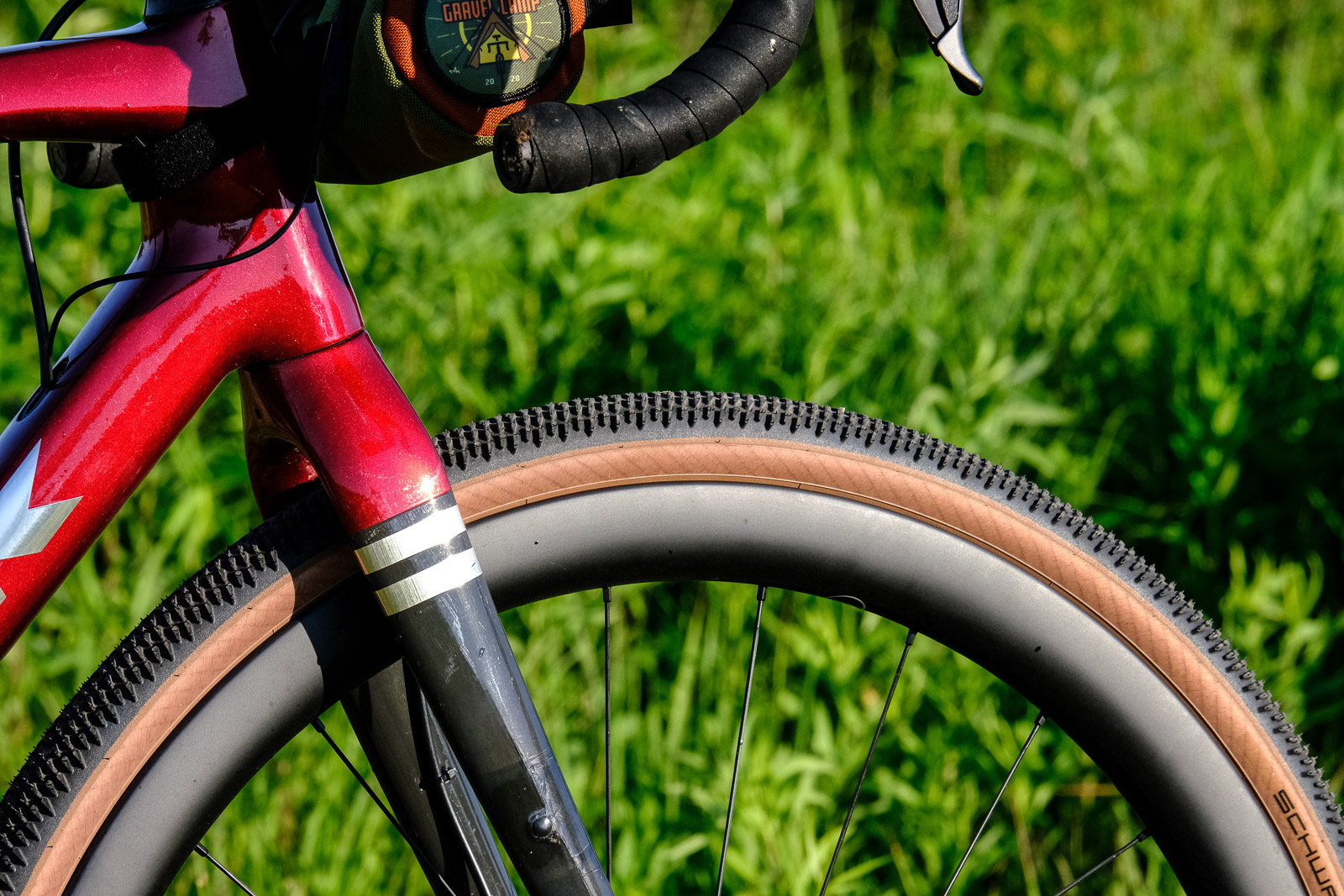 Schwalbe throws a fair amount of clever lingo into the description for the G-One R. There’s the Super Race carcasse, the Boomerang profile, the V-Guard, Turn-up construction…these tires warrant a dedicated dictionary.

But to simplify, the G-One R sidewall is composed of three parts. The V-Guard runs just beneath the tread and adds puncture protection. The sealing lip — which is integrated into the bead of the tire — promises easy mounting. And the Turn-up construction cuts down on material waste.

The Turn-up construction basically means there are three layers of material that make up the sidewall and two layers that position underneath the tread. Schwalbe says this construction also improves impact protection, yet still allows for low rolling resistance and a smooth ride.

The Addix Race compound of course combines all the elements you’d want for your race rig: low rolling resistance, increased grip, and ‘souplesse,’ or that certain something that makes a tire comfortable and grippy. 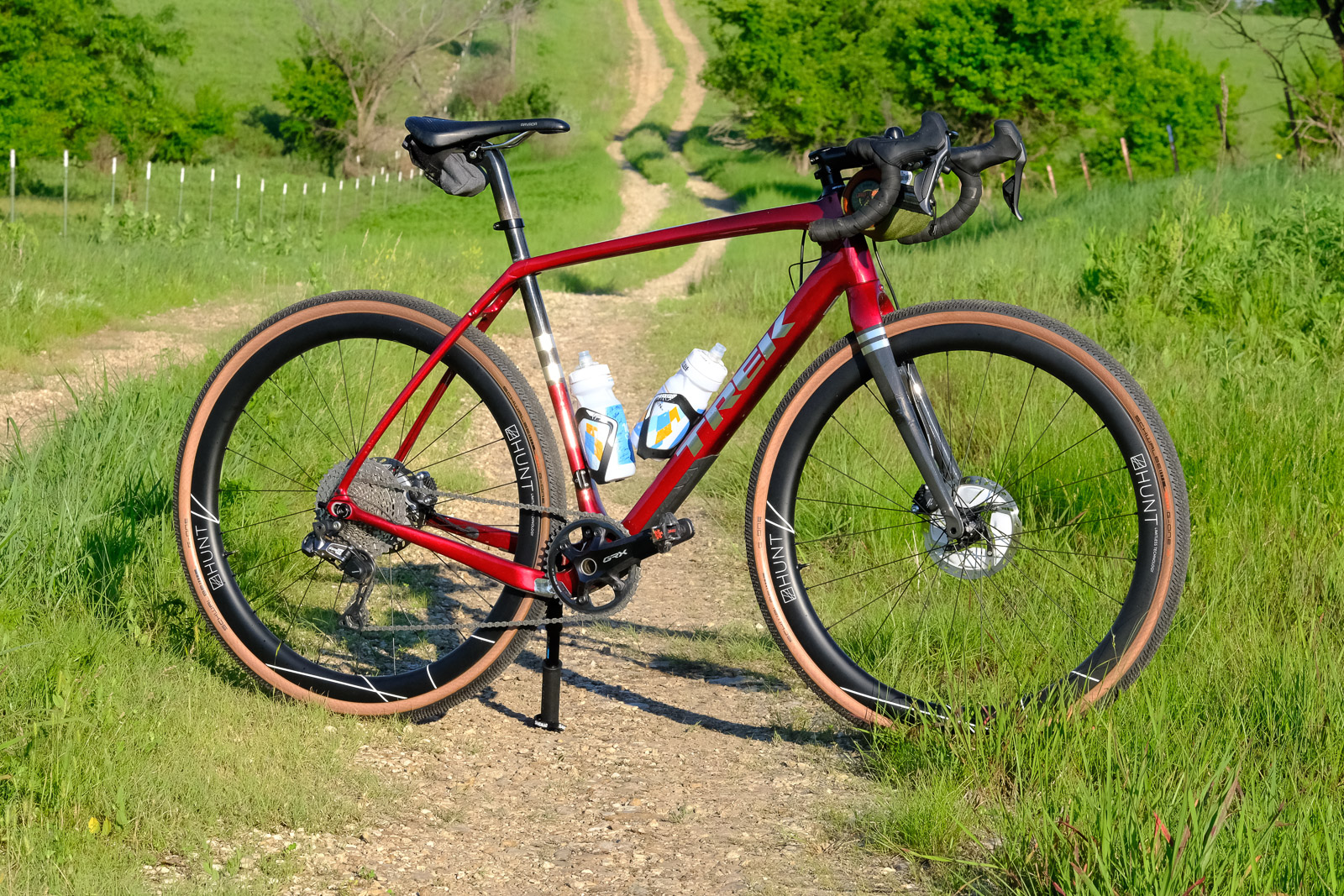 The tread itself has what Schwalbe calls a Boomerang profile. It’s easy enough to identify that with one look: the lugs look like little boomerangs. Schwalbe says this combines the best elements of low rolling resistance with climbing traction.

On top of that, the G-One R tires feature angled side lugs that improve cornering grip. They too feature something of a boomerang shape intended to cut through the top layer of earth to grab on to the grippy stuff below.

I set my test tires up tubeless, and while I had to do a bit of wrestling to get them on my Hunt 42 Limitless Gravel Disc wheels, the process was fairly easy and straightforward. 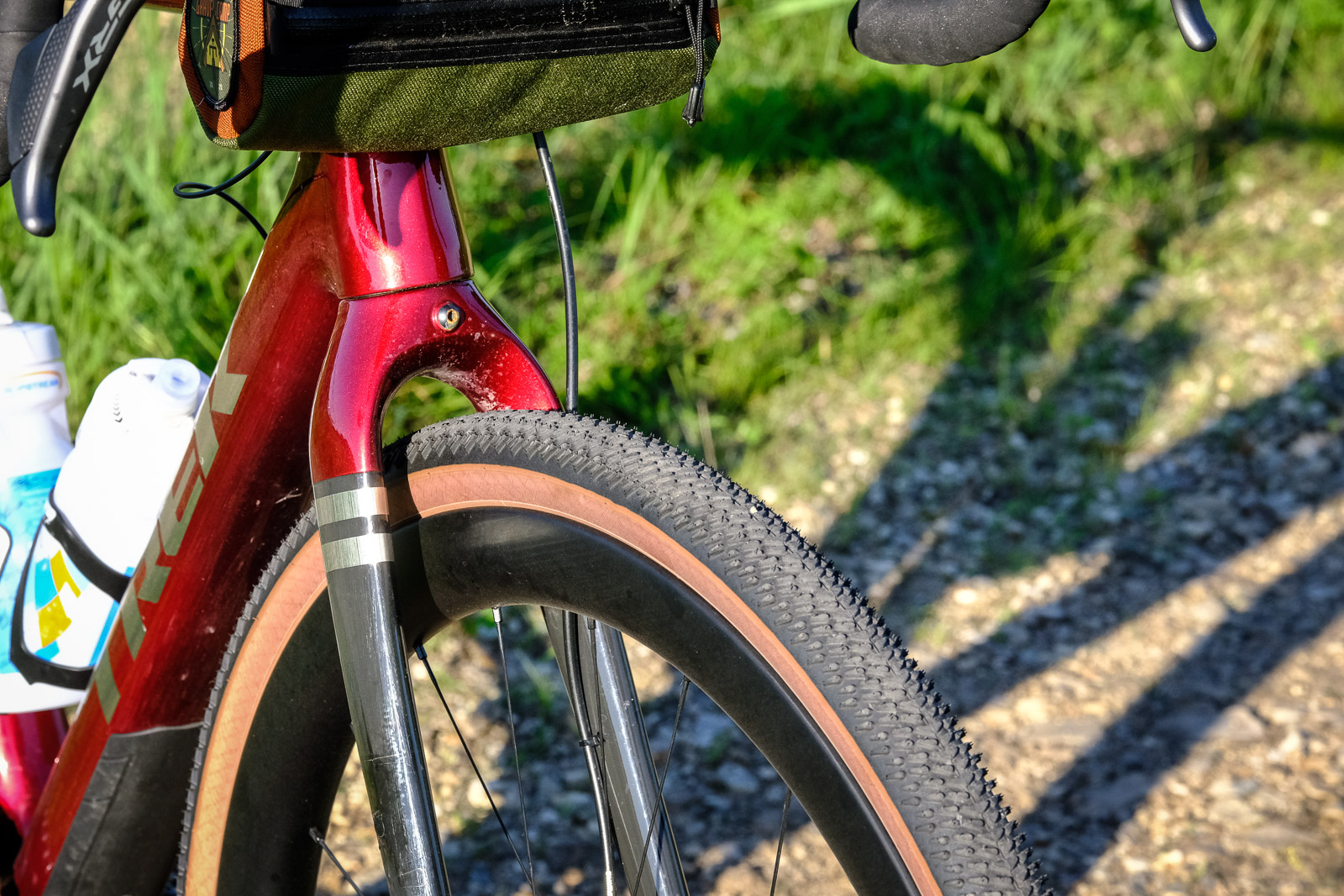 On pavement, the G-One R tires feel an awful lot like others in the G-One range. That’s just fine; that means rolling resistance is low, at least subjectively. You won’t find yourself fighting vibrations from the tire’s lugs slapping against the pavement. The G-One R lugs have plenty of grip (more on that in a moment), yet the center tread is tightly-spaced enough to give you a smooth ride when you need it.

But no one wants these tires just for pavement, right? It’s all about the gravel performance — and that ‘souplesse’ Schwalbe loves to talk about.

Before I rode the tires, I spoke with Amity Rockwell, former Unbound Gravel champion. She had just upgraded to the new tires from her favorite G-One Allrounds, and she was quick to mention that there’s something to that souplesse claim. Indeed, the casings feel structured yet forgiving, which is again a subjective critique. Much of the compliance we all seek from our bikes lives in tire choice and tire pressure, so even noticing such a soft but supportive ride quality is promising.

Having now ridden them myself in the Flint Hills of eastern Kansas, I can confirm these tires deliver on suppleness and support. But if you were to ask me whether they are noticeably more supple than the G-One Allrounds, I’d be hard-pressed to say. Suffice it to say that in my mind, the two tires feel fairly similar in that regard, which I count as a good thing. 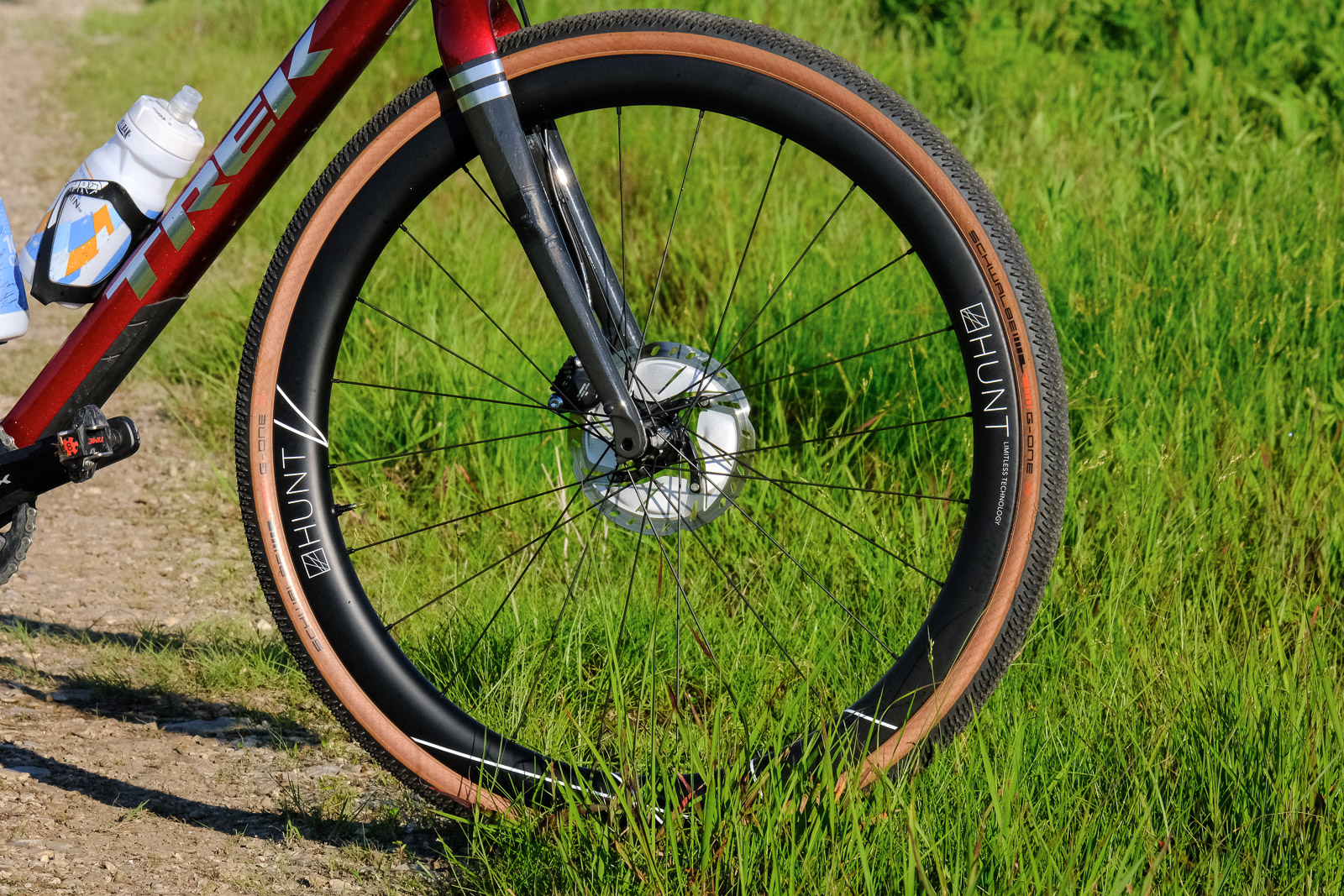 The G-One R tires are incredibly fast rollers. The center tread lets you zoom over hardpack, pavement, and even loose-over-hard conditions. This alone makes the G-One R tires an excellent race tire. It’s pretty incredible to see that center tread clear itself of dirt and mud in real-time, leaving behind a smooth surface for fast rolling.

Cornering, however, takes a bit of care. The corner lugs are low-profile, and they hook up nicely on smooth surfaces. But when there’s a layer of loose gravel over hardpack, the G-One R tires struggle to cut through the top layer and find grip beneath. Cornering on tacky dirt, in light mud (which I got to test back home in Colorado), and even in dry conditions without that loose stuff on top wasn’t much of a problem, however.

Still, if you’re after a tire with a ton of cornering grip, you’re better off with something with a larger corner lug pattern; I like WTB’s Ventures for big cornering grip. 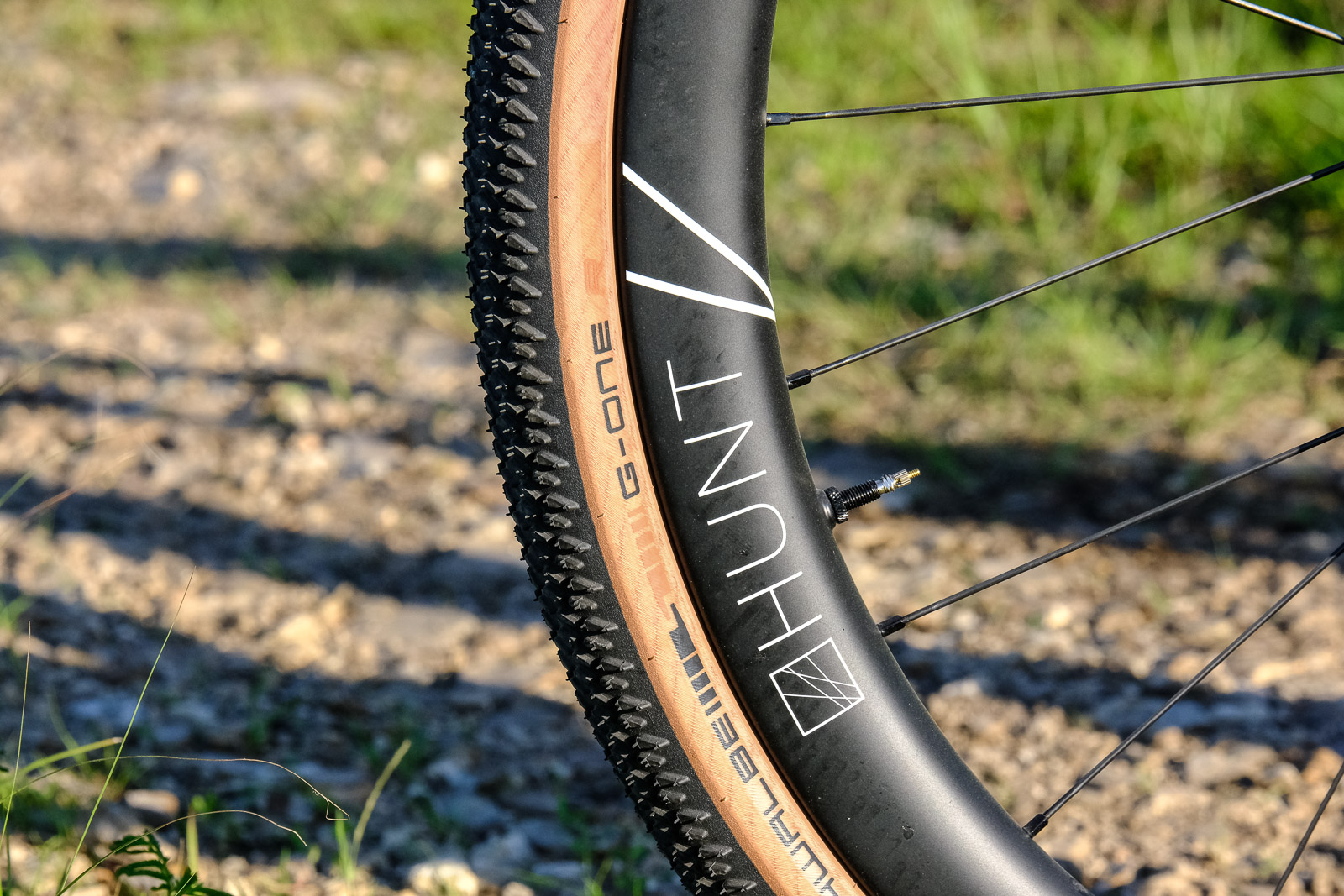 The G-One R tires are light, fast, and supple, so they largely deliver on Schwalbe’s promises. I weigh around 185 pounds and was running the tires at 35 psi, so I definitely tested the durability, too. They seem to stand up to quite a bit of punishment, though I’ll update you if that changes the longer I ride them.

If you’re after a super-fast-rolling tire and don’t mind paying a bit of extra attention to cornering in kitty litter and loose-over-hard conditions, it’s hard to beat the G-One R tires. But if you like more assurance as you lean into corners in any conditions, these may not be the right tires for you. 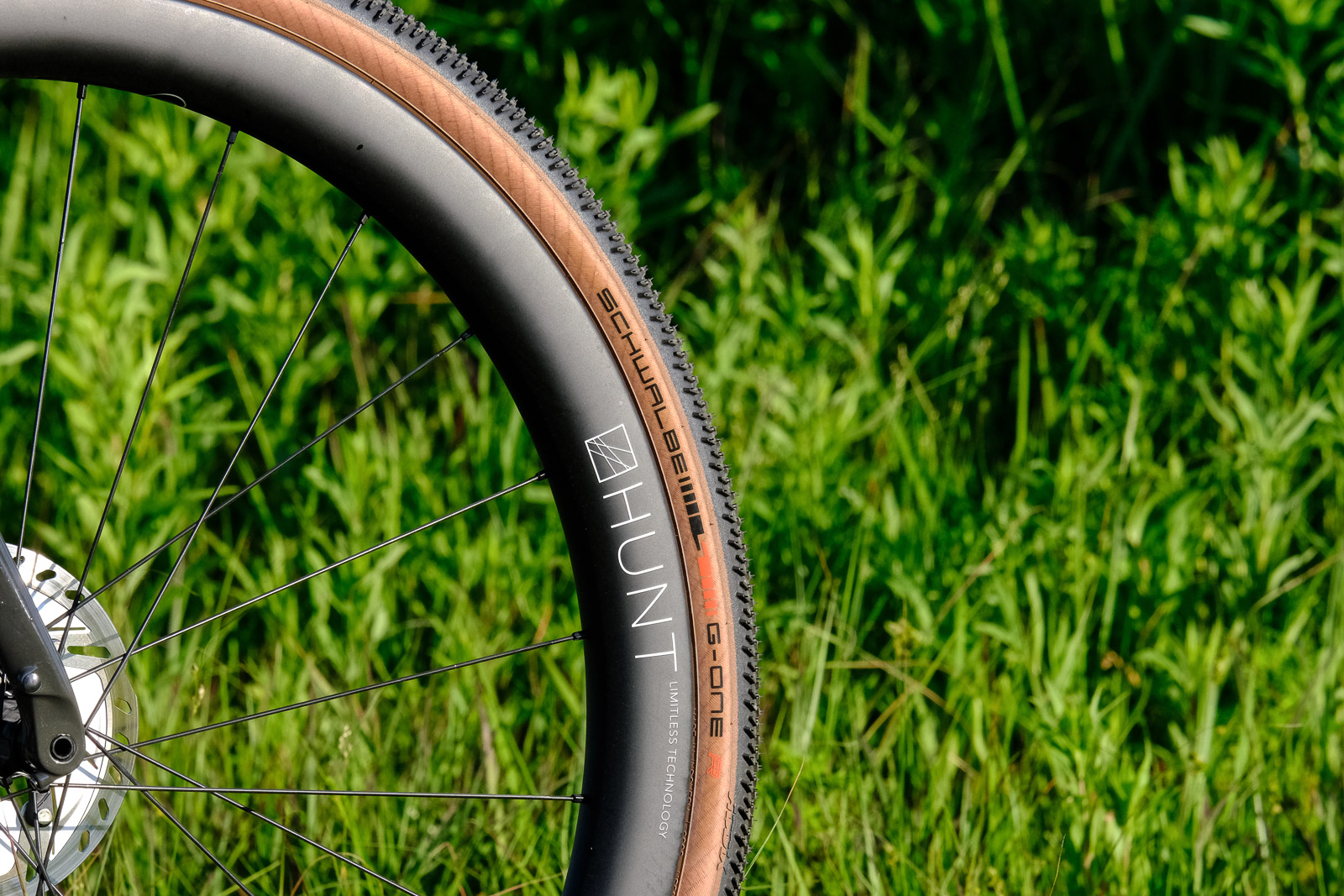 How did they size up?

I use G-one bite tires. My biggest problem is that under a certain pressure the rolling resistance on tarmac increases dramatically. I’m not alone with this, I read many reviews mentioning the same problem. It’s a pity because these tires are superb otherwise.