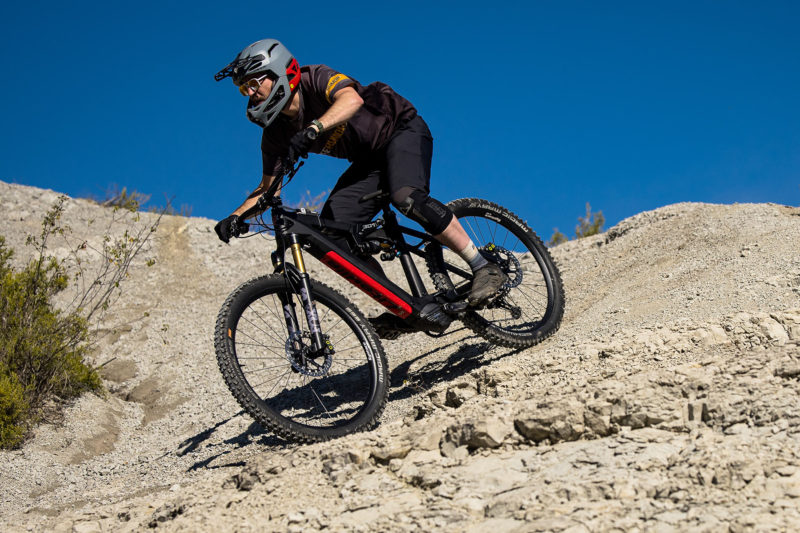 While the Spectral is the first mountain bike to get the new Syntace KIS steering stabilizer, this Liteville 301CE KIS eMTB is the first ebike to get it. And even though on the lightweight carbon all-mountain bike it’s harder to truly notice the differences or even accept the need for stabilization, the added ebike weight and inherently less stable handling of this big alloy eMTB makes the KIS upgrade almost a no-brainer… 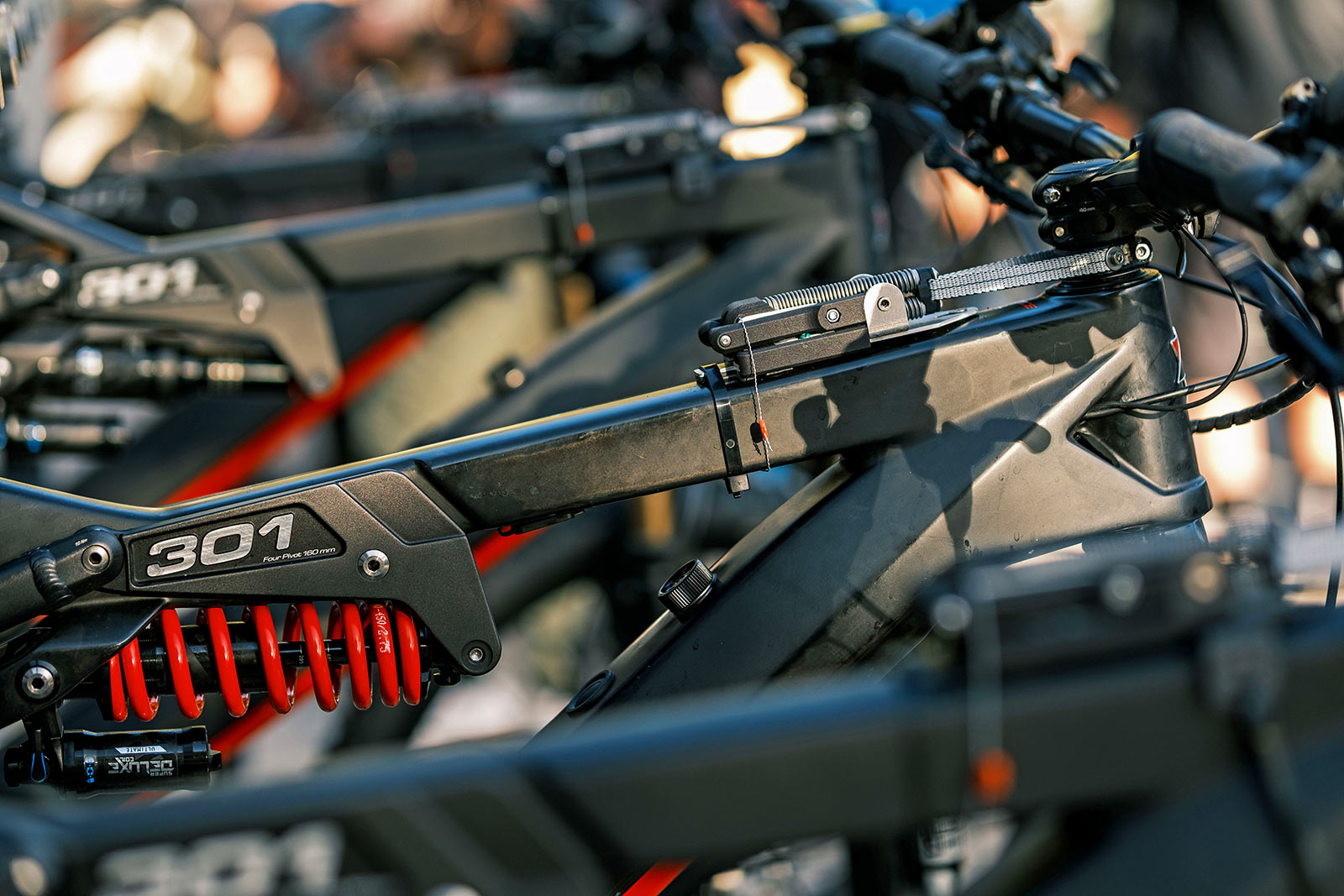 The same exact concept as on the carbon Canyon Spectral KIS all-mountain bike, Liteville’s similar travel alloy ebike also gets the Syntace K.I.S. steering stabilizer to counteract impacts seeking to knock your front wheel off its line and to automatically return your handlebar back-to-center. But due to the inherently more sluggish ride you get from adding the weight of an electric motor and a big downtube battery, the KIS system really helps tame this bigger bike.

Why does KIS stabilization work so well on an ebike? 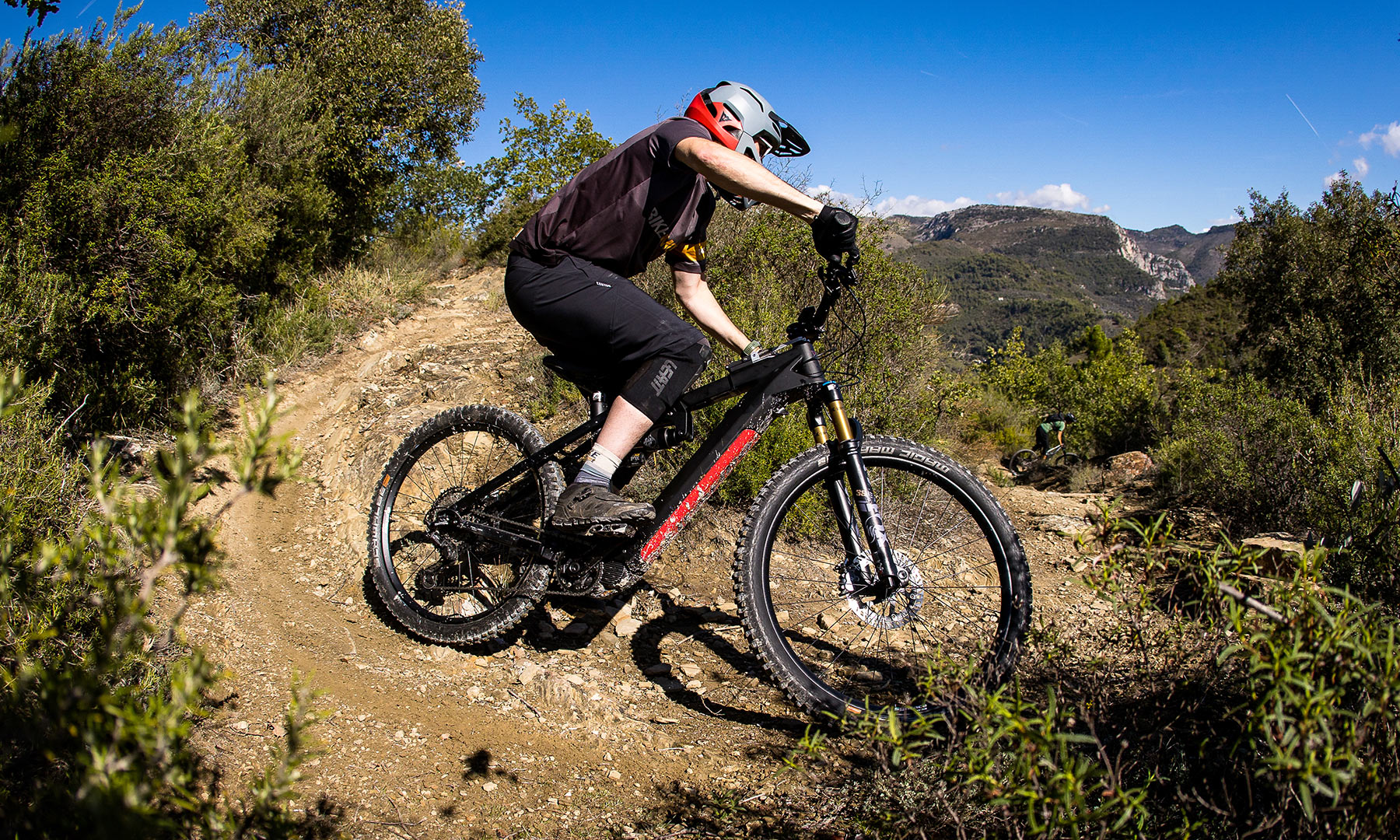 Ebikes are simply heavy. And heavy bikes require more effort to keep upright – whether maneuvering the heavier bike down steep technical trails at speed or just balancing them to prevent wheel flop on the steeper climbs that you couldn’t even imagine on a bike that was exclusively pedal-powered. 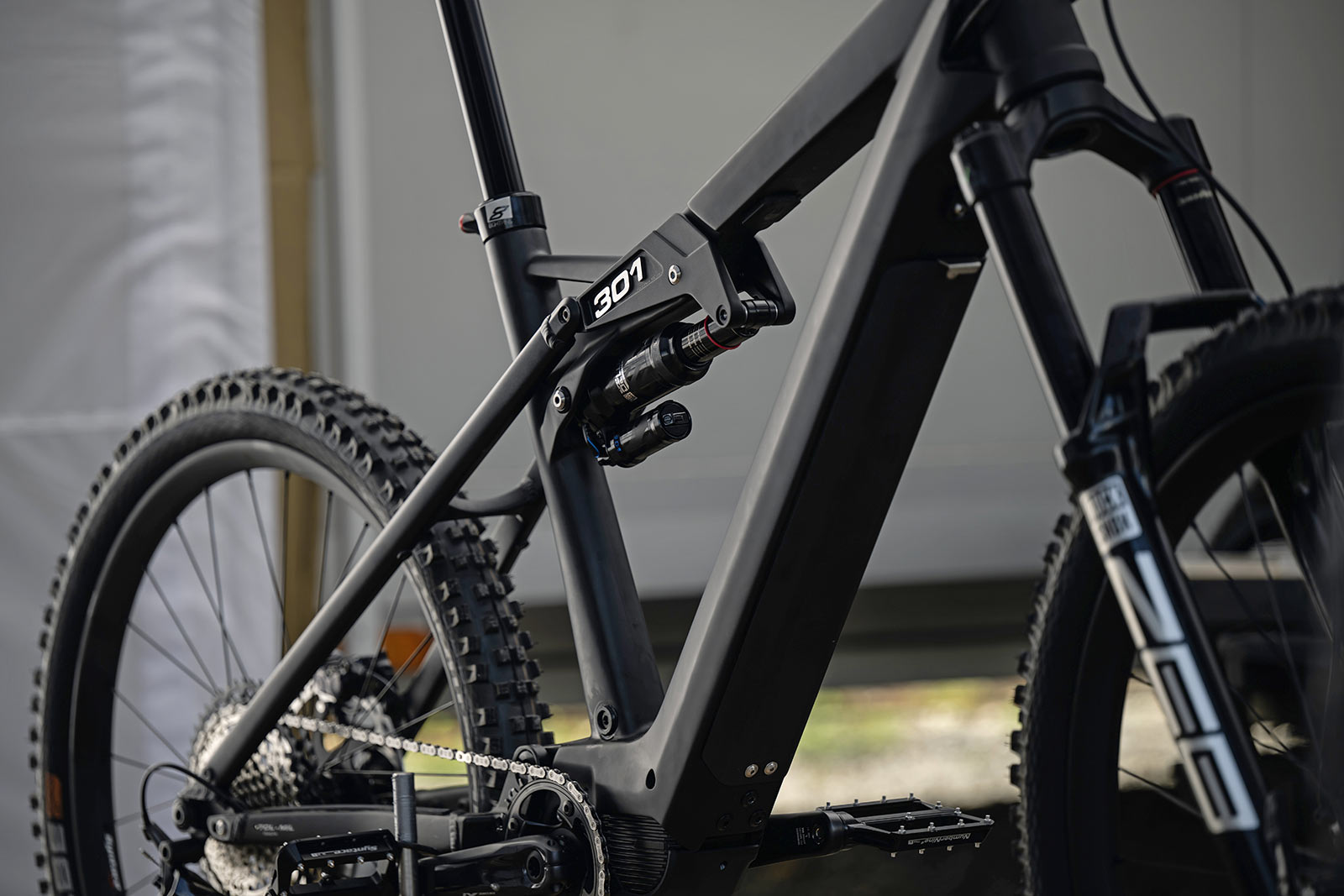 Here with a Shimano motor & 630Wh battery, the Liteville 301CE KIS ebike weighs a little more than 23.5kg – or about 9kg more than the carbon Canyon. Plus, this large eMTB has a shorter frame Reach & higher Stack with a similar 64.5° head angle and a bit more travel than the Canyon – here 170mm front/160mm rear travel.

The result is that the 301CE simply requires more user input to control.

So the stabilization of the K.I.S. Keep It Stable system is welcome. 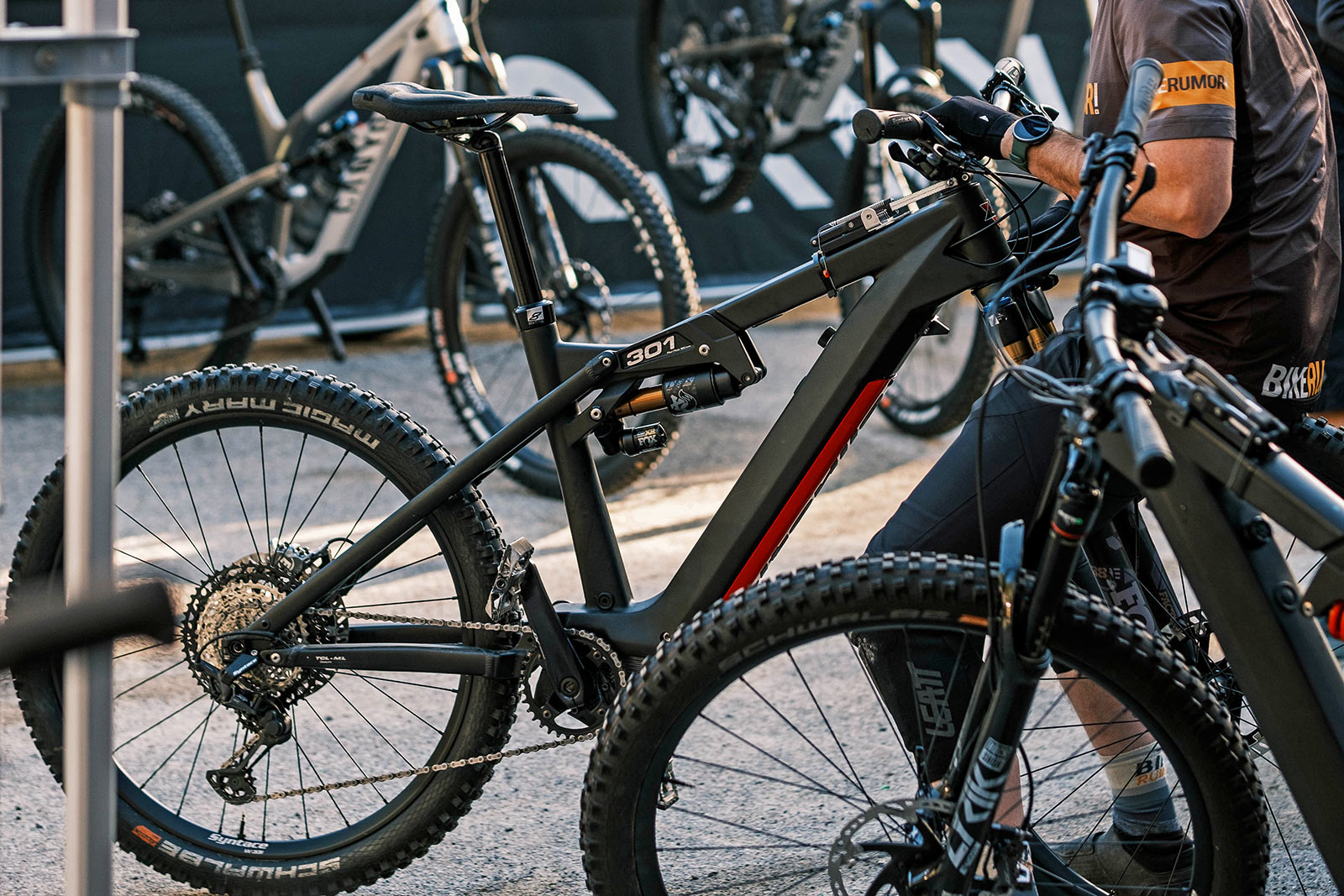 Like the Canyon, the Liteville 301CE KIS is only a lightly modified 301CE. It gets the same exact burly alloy frame with an 85Nm Shimano EP8 motor and removable 630Wh battery in the oversized downtube, and an Eightpins dropper post fully integrated into the frame.

Unlike the prototypes that I test rode with the “mousetrap” external steering stabilizer,  the production 301CE KIS ebikes tuck the KIS tech inside the toptube so all you see is the slider to adjust the spring tension. 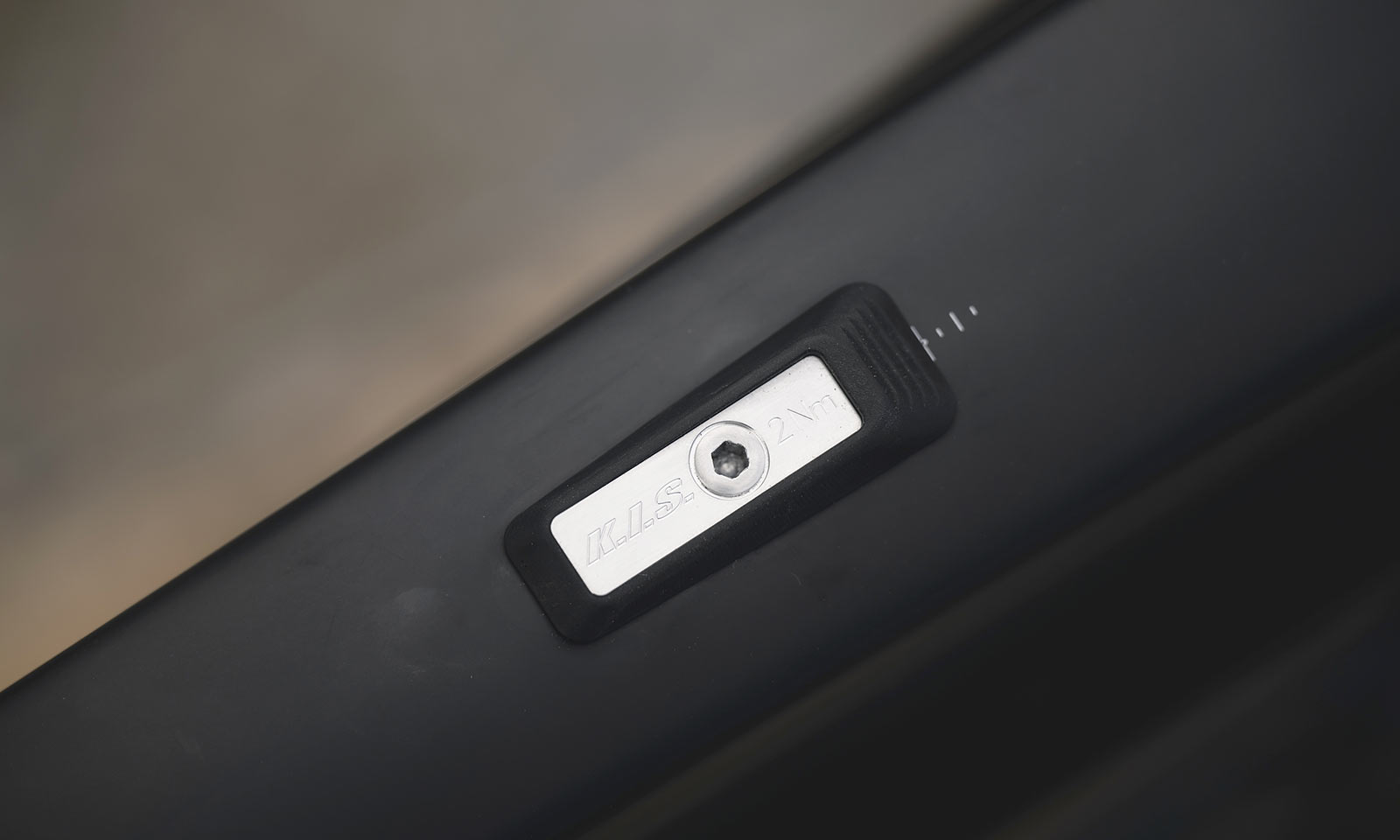 Liteville hasn’t shared final pricing with us yet, but the new KIS-equipped version should retail around 9999€ with the 170mm Fox 38 Factory fork & Float X2 Factory shock, plus a full Shimano XT groupset. They’ll also likely offer SRAM/RockShox build options too.

So how does it all feel on the trail? 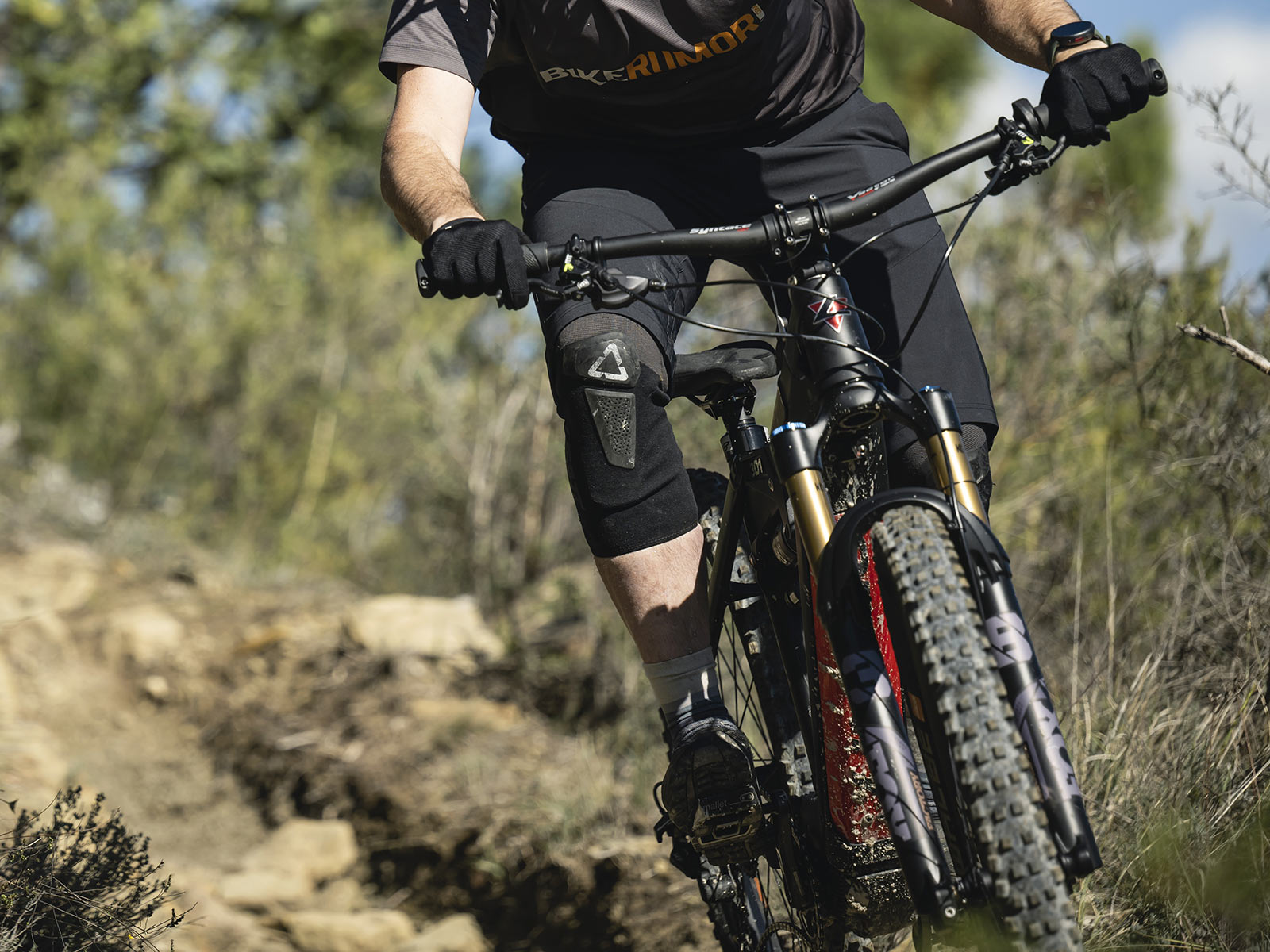 Interestingly, Liteville who actually originally developed the K.I.S. system (Liteville is the bike division of Syntace), they chose a lighter-weight spring for their production bike than Canyon did with their lightweight carbon all-mountain bike. But nevertheless, the performance improvements seemed more dramatic on the Liteville.

Getting to do back-to-back laps with the 301CE – turning the KIS  stabilizer on & off – it’s obvious that this ebike is much more fun to ride with stabilized steering! 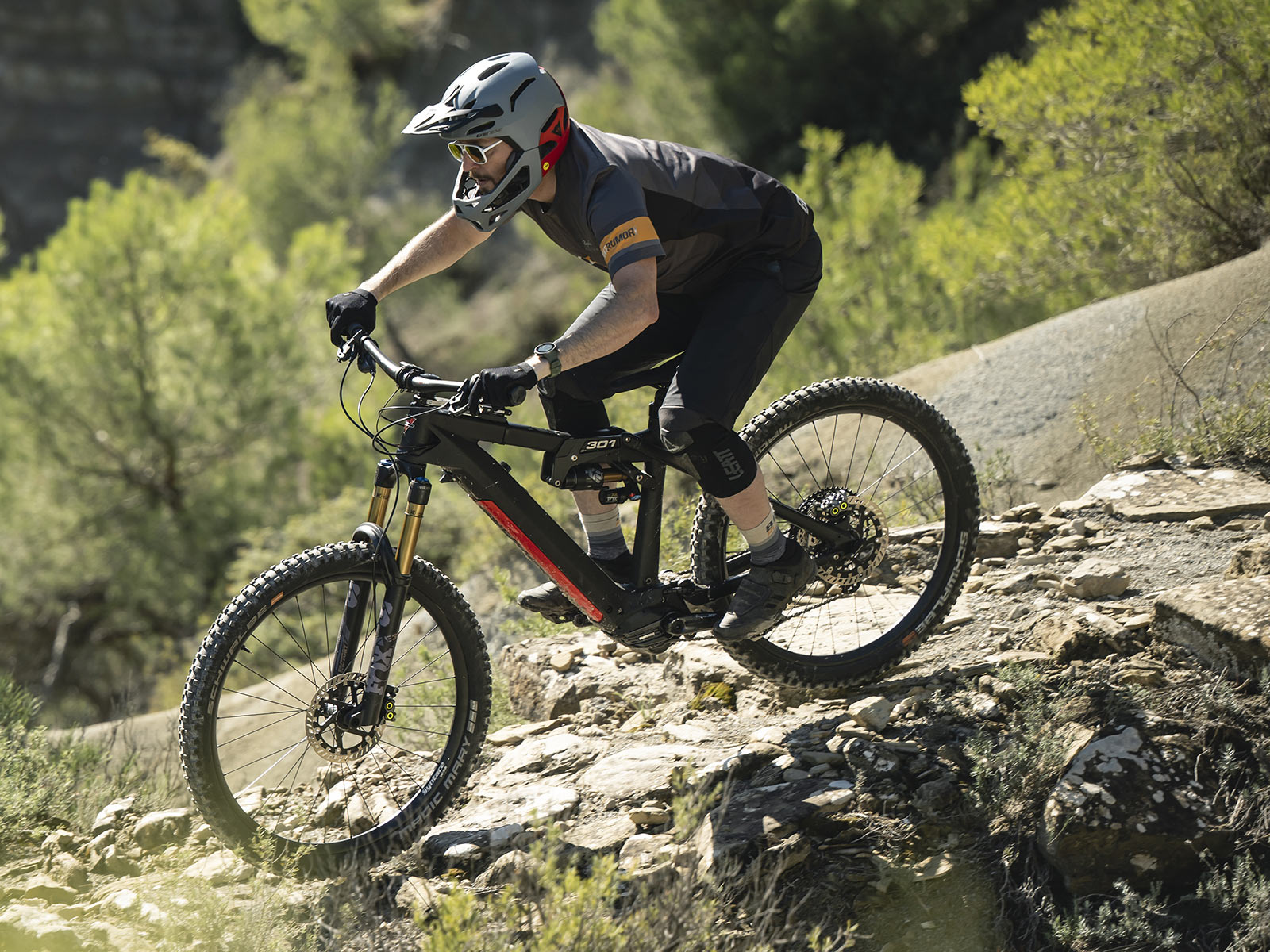 Just like we were told from the start on both platforms, the ride feel is pretty seamless and intuitive from the start. But disengaging the KIS spring on the Liteville 301CE KIS gave the immediate sense of being less in control. Let’s just say that I almost rode head-on into a boulder at speed, one I had no trouble navigating around on the previous trail lap a half an hour earlier. 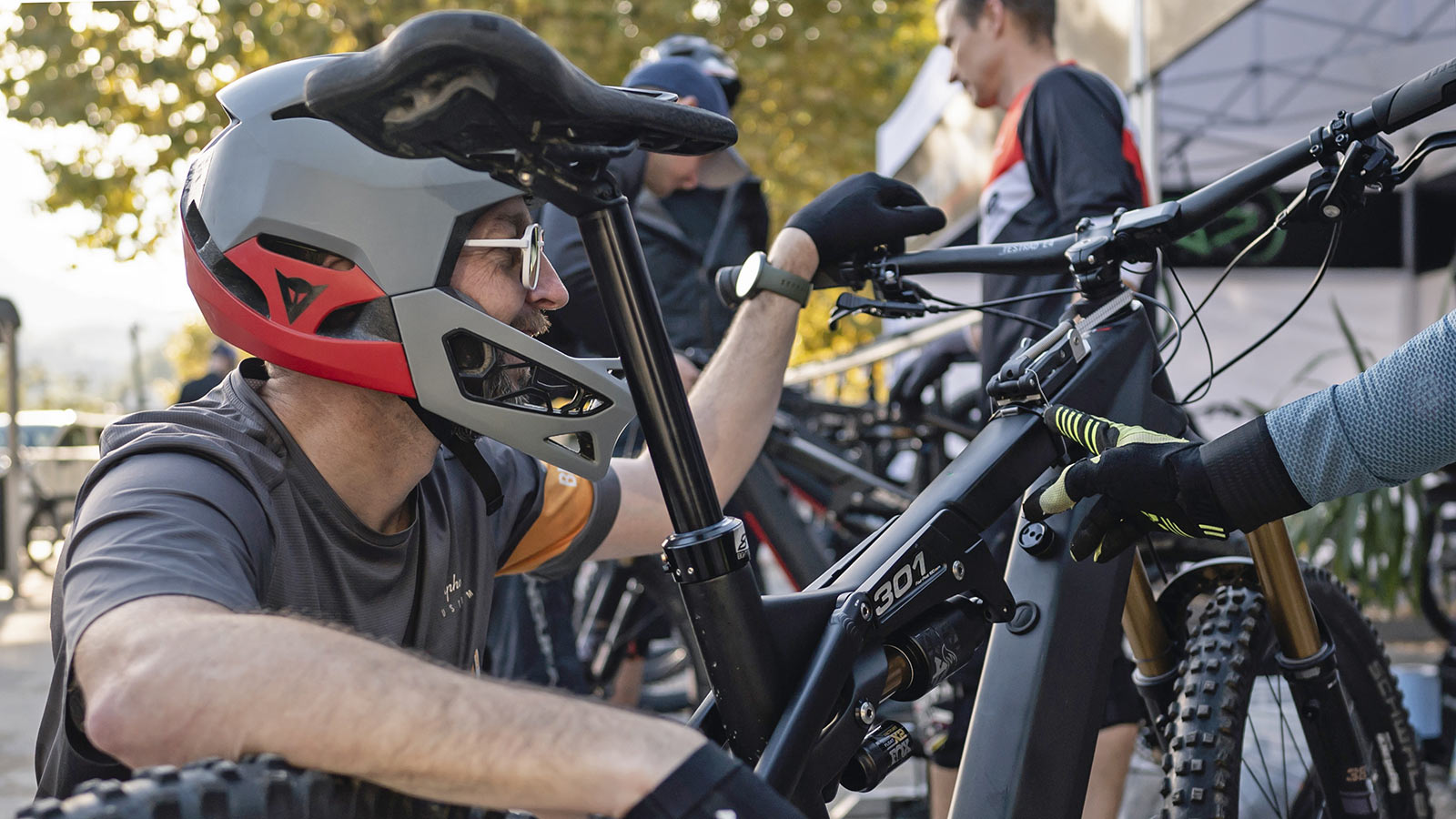 Cranking up the tension on the KIS spring really gave the sensation of more grip on the front wheel, with the rear wheel tracking more smoothly through the turns. I spent less time in the air on the heavier ebike, but its lighter spring also didn’t feel as compelled to straighten out the bike off the ground as quickly, which makes sense. 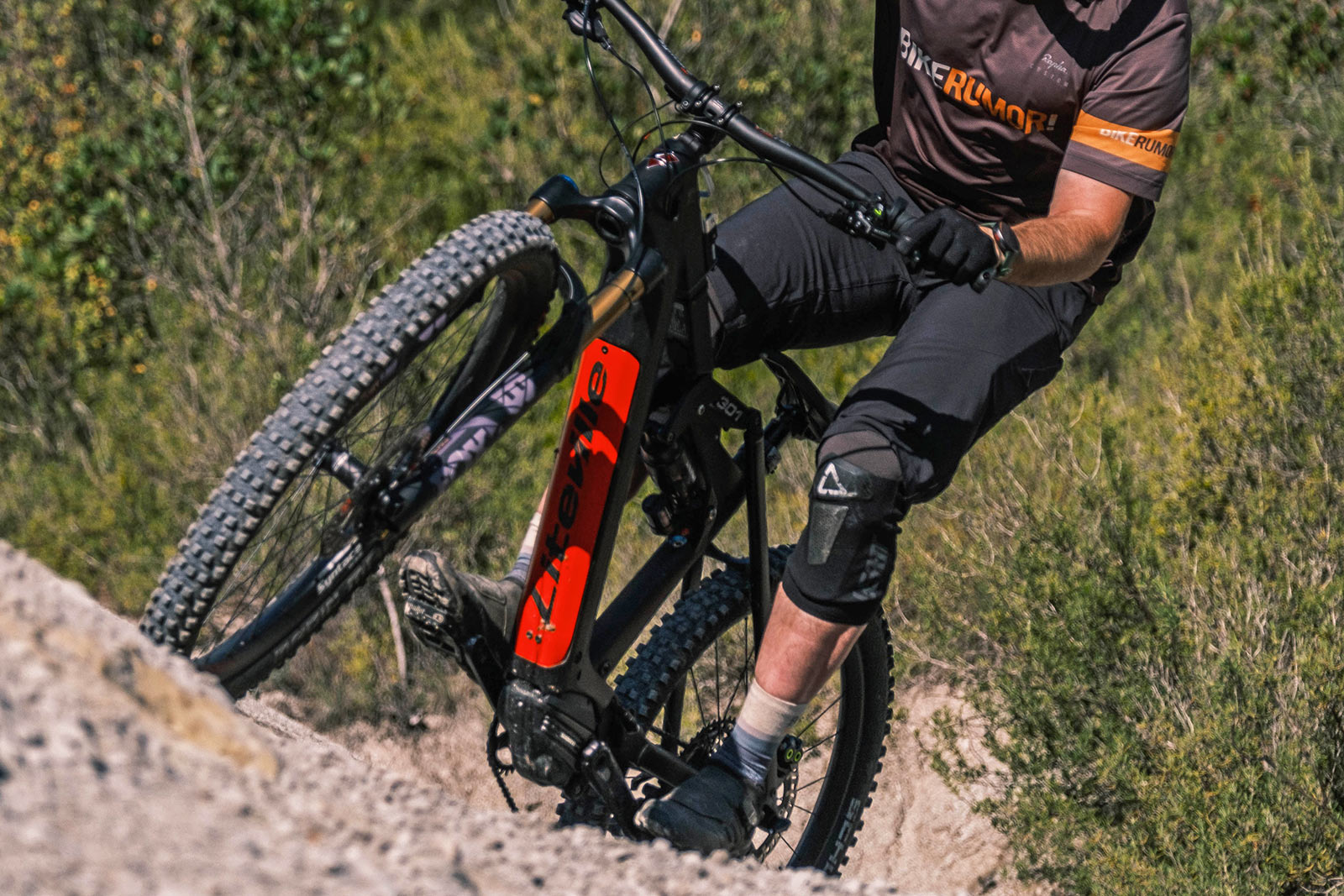 But in the end, I came away feeling like riding the Liteville 301CE KIS with the KIS system disengaged made it feel like I was riding an e-enduro bike down unfamiliar trails. Switching it back on made me feel safer, more in control, and more like I was riding a lighter bike. After I almost hit that boulder, I didn’t have any desire to ride choppy trails on this ebike without the benefit of the K.I.S. steering stabilizer. 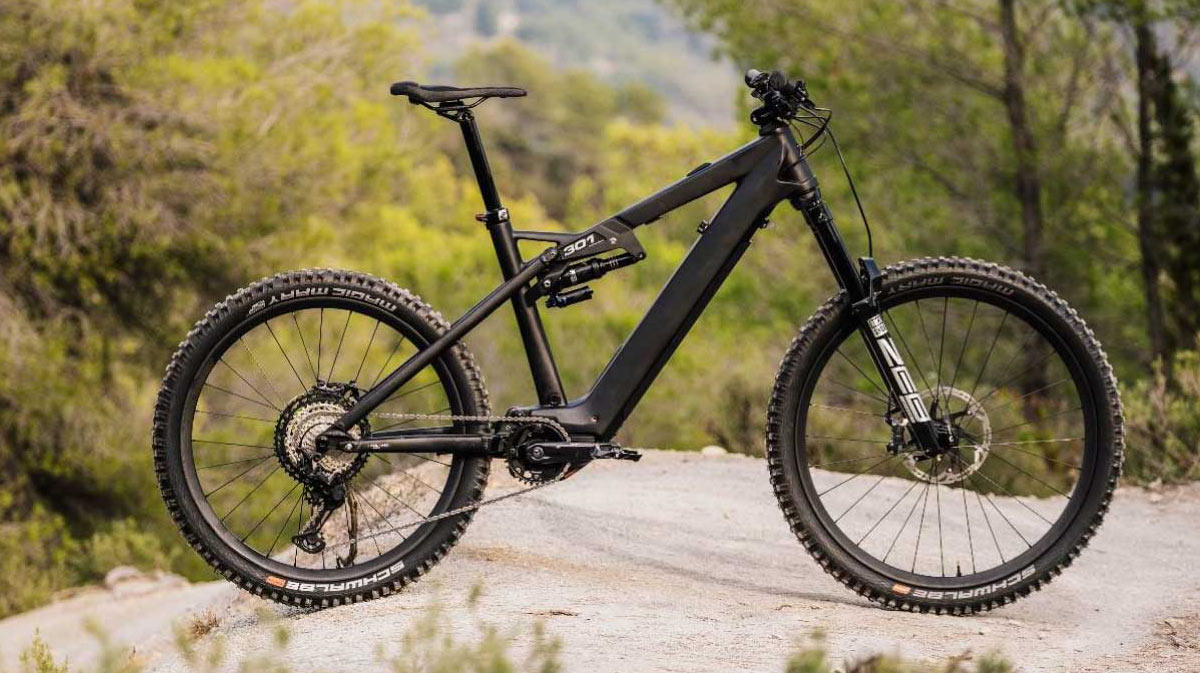 The ultimate availability & pricing of the KIS-version of Liteville’s 301CE eMTB isn’t entirely clear. But what I can say is that if you were already planning to buy a 301CE, I would be sure to get the KIS upgrade, or wait until they have one ready for you!