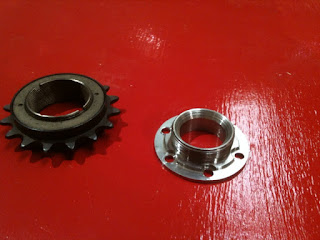 I just recently stumbled upon this via Problem Solvers Twitter feed, a six bolt freewheel adaptor from Monkey Likes Shiny! Now, most of you are probably scratching your heads, wondering why someone would possibly need such a device.

My first realization to the potential of a similar set up came after seeing the 2010 Eastern Night Train, that was equipped with a Birectional driver on the disc brake side of the hub.

Why? Because as the line between BMX and BigMX continues to blend, so does the riding style of the bigger bikes. Many riders would like to put a peg on the back of their 26″ BigMX bike, but are forced to choose potential damage to the chain wheel and cog, or damage to the disc rotor as they are on either side of the bike. Now, if you were to put both the drive and disc brake on one side of the bike, that would leave one side open allowing the rider to grind to their hearts content.

More on why this is an awesome idea after the break!

I should clarify that the adapter can either be used alone, simply allowing you to add possibly a second freewheel to make a disc hub a flip flop, or can be used with a rotor as well. The rotor would sit over the flange on the adapter, and the rotor bolts would hold both the rotor and adapter in place on the hub enabling the use of a brake and drive on the same side of the hub.

Obviously, the Birectional Eastern hub which allows for a 12 tooth driver that can be mounted either right or left side drive is the ideal. However, the Eastern hub is currently unavailable for sale, and would undoubtedly be more expensive than an adapter and a free wheel. I love this design and would ride it on my bike if I didn’t have to buy a complete bike just to get the hub.

If the free wheel adapter was available for sale, all one would need would be a standard freewheel disc hub (a single speed hub like this would work best due to the flanges being set wider for a stronger wheel), the adapter, and a disc rotor. Mount everything on the disc side of the hub and you’re good to go.

Jeff, who is the blogger from Monkey Likes Shiny, stated on his blog that he was making some parts for fun and maybe someone could make something cool with it. I think this would be a great idea, but it would need some changes. First, the threading would need to be offered to match left hand drive free wheels which are 1.37″ x 24tpi LH threading. Even better would be making a version that was compatible with the smaller Metric threads of the Odyssey LHD 13 tooth freewheel to keep the front chain wheel as small as possible. The issue with it being right hand drive is that your bike would have to have disc tabs on the right side of the frame, which would be cool but not many bikes fit the bill.

This and more bicycle related machining and building endeavors can be found on Jeff’s Blog. If you like all things bike and tech, it’s well worth a read!

wouldn’t this run the risk of picking up chain gunk on your disc? I realize they aren’t touching, but it seems like even on my SS bikes it gets extra dirty in the vicinity of the chain.

Yeah, I thought of that too. I would have to try it to find out, as I have no experience on the Eastern, but dirt jump chains are rarely lubed so it might work out. My chain on the mob isn’t noisy, yet it is pretty dry to the touch and the area around the chain is perfectly clean and free of lube so I think it may work, but good question.

why don’t you put a belt drive on it
it would solve to the dirty chain issue and be smooth
EVERYONE single speed is hoping on the band wagon.
Or why not use a hefty V brake or a big BMX style brake,
the rim has to be made pretty strong to do tricks on a 26er as it is
wouldn’t a brake track add more material and make the rim stronger?

aside from that, wouldn’t grinding with a suspension fork damage the pieces on
the bottom, and not to mention, put all the pressure on one station and damage your fork?

Not sure a belt drive would hold up to the abuse. I feel like a few crank stalls on a wall or Jersey barrier and it would be toast, also not sure the teeth would hold up due to how much torque would be applied. An interesting thought though, does Gates fancy a test?

The V would work possibly if you used something like an HS33, except few manufacturers make frames with posts that would work. I believe most brake tracks actually make the rim weaker, due to the machining of material away from the rim. Not to mention the constant wear of the pads against the rim, and the fact that DJ wheels are routinely smashed so that they wouldn’t roll through a brake.

Finally there are plenty of grinds you can accomplish with out using your fork or a front peg. Ice picks, Feebles, derek dusters, just to name a few.

It’s a neat idea, but there isn’t enough space to mount both a freewheel and a rotor on the 6 bolt side of the hub.

Who makes a right side disc caliper?

This might work w/ a threaded hub to make a left side drive disc wheel, but you’ll need to use a track hub & lockring ( 135mm track hub?) because either pedal pressure or braking forces will unthread the freewheel/ disc unit.

Where can I get one of these adapters asap