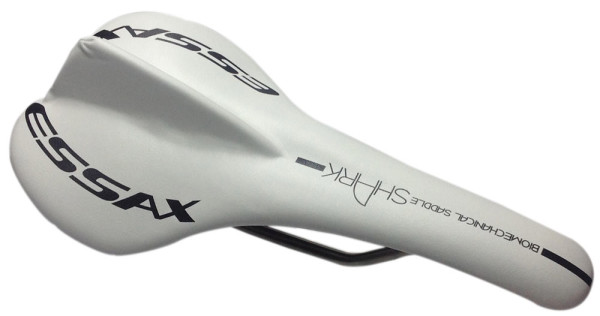 Where to begin…how ’bout the science. Essax says bad position on normal saddles can be a result of hip rotations, limb differences, inefficient pedaling techniques and more. And that traditional saddles attempt to correct these issues with wider platforms, more padding or center relief channels, but they say those won’t do the trick. Rather, and these are their words, the Shark “goes to the core of the problem”. It’s designed by Custom4.us, a biomechanics-based fit studio, then made by Essax. The idea is to help the cyclist evenly distribute pressure across the two ischia (sit bones) and, to a lesser extent, the perineum.

Their research showed that even when most cyclists felt comfortable, their weight was unevenly distributed across these areas, which led to decreased long term comfort and performance…

The fin simply helps situate the rider properly. They say if you can feel it, you’re not positioned right. It’s not meant to, um, divide and conquer. There’s no need for your bike fitter to say “bend over and spread ’em”. It’s simply there to facilitate a good position.

How it works with existing chamois pads remains to be seen – we doubt they’re designed with this sort of stretch in mind, but could make for an interesting test.

Originally designed mainly to improve rider comfort and ergonomics, they’ve found it boosts performance, too. Samples have been submitted to the UCI for testing and approval for use in competition. Triathletes, who don’t need to worry about such things as “rules” as often as roadies, should love it since they’re in an aero tuck all the time. Not sure I’d wanna sit up for a stretch on this one.

Oh boy, where to begin with this…

Reminds me of “The Entity” designed by mr Garrison.
Google “the entity south park” (NSFW)

I think the Hatchet saddle would be a better name. Please post a picture of the inventor of this thing!

Are you f’ing kidding?!? Is it April 1st already. I spent my life as a kid, and now and adult, pulling my Fruit of the Looms out of my butt crack because it felt plain icky.
Generally I cannot stand the flammers who comment on BR……..but this time I can’t wait to read.
All you negative bastards, with a sense of humour, please line up.

“Doh! We were supposed to wait until April 1 to publish this”

Where do the batteries go?

I want to see the Unicorn Saddle.

On the plus side, if someone asks to borrow your bike, you can just remind them that it’s been up your ass.

“It Beats Dealing With The Airline Companies” – Mr. Garrison

Reminds me of Spinal Tap:
“The two word review of Shark Sandwich…”

Can we please just go back to the classic saddle shapes that worked for everybody, provided you put in the time i figure it out for yourself?
Oh, and can we also outlaw reviews on bike seats?

The saddle that boldly goes where other saddles have only dreamed about!

You’ve got to be f@#$ing kidding. Why did they put so much time and effort into this torturous looking device? This will be immortalized in a saddle museum somewhere.

As a bike fitter that has seen this issue hundreds of times. Thank you!! I no longer have to tape a stick to the middle of my clients saddle.

Can I get one in brown?

Can you take the cover off and clean it if it turns a little brown?

White? Should be black leather with chrome spikes.

My feelings are spit down the midle on this one.

I REALLY want to see someone with this saddle, I really do. Cobbles and this saddle may be the equivalent of a Sybian.

White may not have been the best choice, at least for the fin. Maybe a nice black and tan to hide the inevitable staining?

It is spelled shart not shark…

Meh. Still better than a Fizik Arione. Spec it OEM on a Cervelo and call it a day.

Ben, here’s a picture of the inventor.

Reminds me of this.

Love the comment from @big ring. Gold! Pissed myself.

There’s a whole group of people who allowed this to happen. Please, save your children. It. Is. Happening.

What if you drive in a pothole?? or a really rocky, jiggly, whatever pavement? what the Hell if you accidentally sit on it with your balls? goodbye future babies

There is no way this saddle doesn’t stretch / rip / prematurely wear the buttcrack area of a pair of properly fitting bike shorts.

First dialogue about the shark at Assaxe (I mean Essax)

Inventor: Ok I have this great way of keeping a rider the right position on the saddle!

Inventor: All we have to do is place a kind of fin between the buttocks and it locks the pelvis into the correct position. Amazingly simple!

Engineer: You want me to make a seat that gives you a wedgie?

Inventor: No not a “wedgie” a ” pelvic stabilizer ” , its brilliant!

Engineer: No this is a scratch and sniff nightmare.

Inventor: I’ll call it the SHARK, its going to transform the industry!

Inventor: Of course I am

BR should make a new category for “Smackdown”, where manufacturers can throw out products like this for the ultimate litmus test by our esteemed readership.

Sale revenue (or lack thereof) speaks for itself.

does the women’s model have the fin to the front?

Two questions: 1) aerodynamically speaking, could the “fin” give you more lateral stability when sprinting; and 2) is this the men’s or women’s version?

Of course you will go faster with the saddle. You just want the race to be over so you get the heck off it!

Apparently there’s a typo in the saddle’s name. It should be called Ass Axe.

SQlab has been making saddles in multiple widths for over 10 years with no fin and we haven’t heard about too many people falling off their seats! 😉 Plus, we have an easy and effective fit system you can get from us for free. Just visit our website at http://radsportusa.com/sqlab.html and order you free kit. We’ve got some new road saddles coming soon too.

Can you imagine buying a used Essax saddle?

Just think, if you put a little velcro on the thing it will clean dingleberrys out!

I have seen the seat today in real life.
Our clothing manufacturer Bioracer had one for testing.
How will it effect friction on bibs, chamois, stitching, …

First it looked like a joke and I was even scared looking at it.
Maybe in 5 years from now all cyclist have a smile on their face 🙂