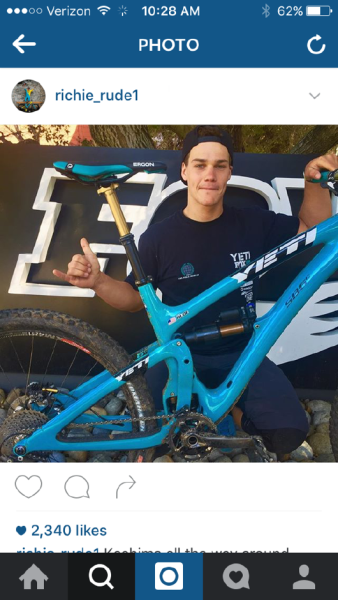 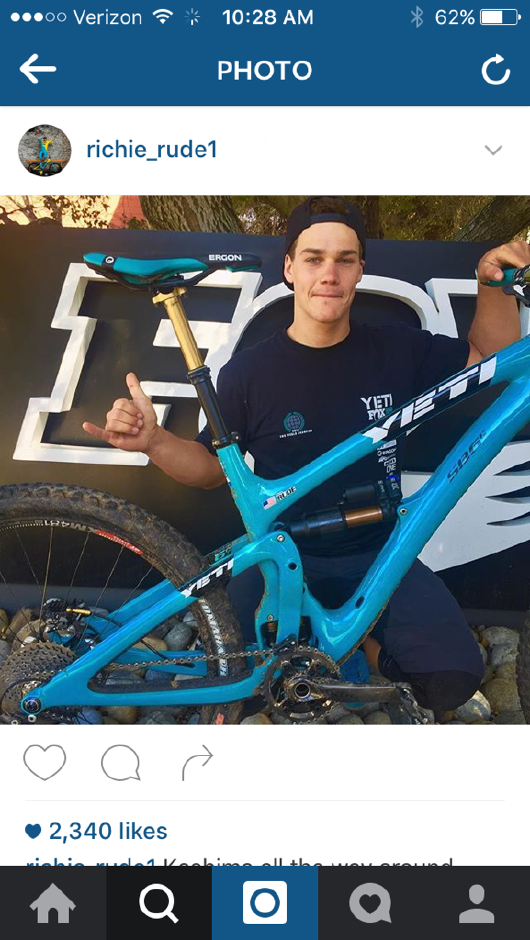 Spotted on Fox-sponsored enduro racer Richie Rude’s Instagram is this Kashima coated DOSS dropper seatpost that’s missing the external cable routing and release mechanism. It shouldn’t come as any surprise that Fox would be working on a stealth version, only that it’s taken so long. Even at social media screen resolution, this one’s looking polished enough to suggest it’s close. And if Rude’s racing on it, it must be far enough along to be very reliable as any parts failure on a bike during an enduro event can ruin a race if not the entire season…a risk not worth taking on early, unproven prototype parts.

The performance benefits of Kashima coating are going to be huge on that dropper!

Also interesting he’s running the X2 with ProPedal lever on the Yeti, which is supposed to be a good pedaller already!

Kashima – hey, if it’s gold it must be good (and allows us to mark it up. Because gold.).

I’ve a few friends in materials engineering and Kashima is the greatest marketing BS ever invented.

Kashima coating is a waste on a dropper post. It offers nearly nothing with the few cycles a dropper post goes through compared to suspension.

More to the point, I’d be more interested to know about the internals of the post (Are they going to follow RF and Easton?) than the post’s coating.

I was dissatisfied with the sticking of my Specialized seat post. Now I just wipe it down and add a small amount of Slick Honey grease before each ride. It works very reliably now. I am pretty sure that Kashima coat is no substitute for cleaning and lubrication.

Thank goodness, basically no performace gain, but it sure will look nicer!

When youre shelling out a grand or 2 for slidy bits, you d*mn well should be able to get a matchuing set.

They are coming late to the internal routing seatposts…. Even Thomson that was one of the last developers of a post, they made the internal before others. I hope Fox make a nice lever for this model because the most ugly thing in Fox are any kind of remote lever build from them.