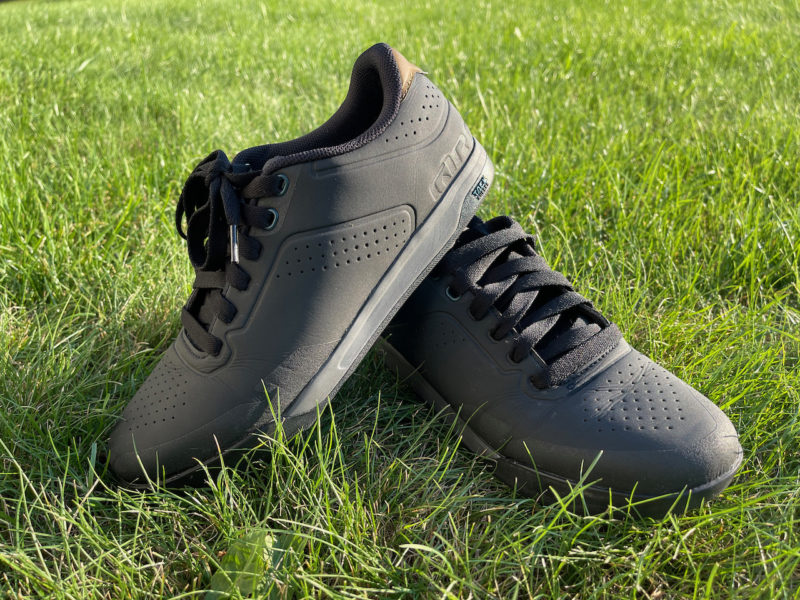 Giro quietly released one of the best feeling flat MTB shoes we’ve ridden. It’s not the nature of the launch that’s quiet – I bet you’re seeing them everywhere by now. The shoe itself is muted, giving no chatter, slap, or toe-tingling vibrations, just silent feet. 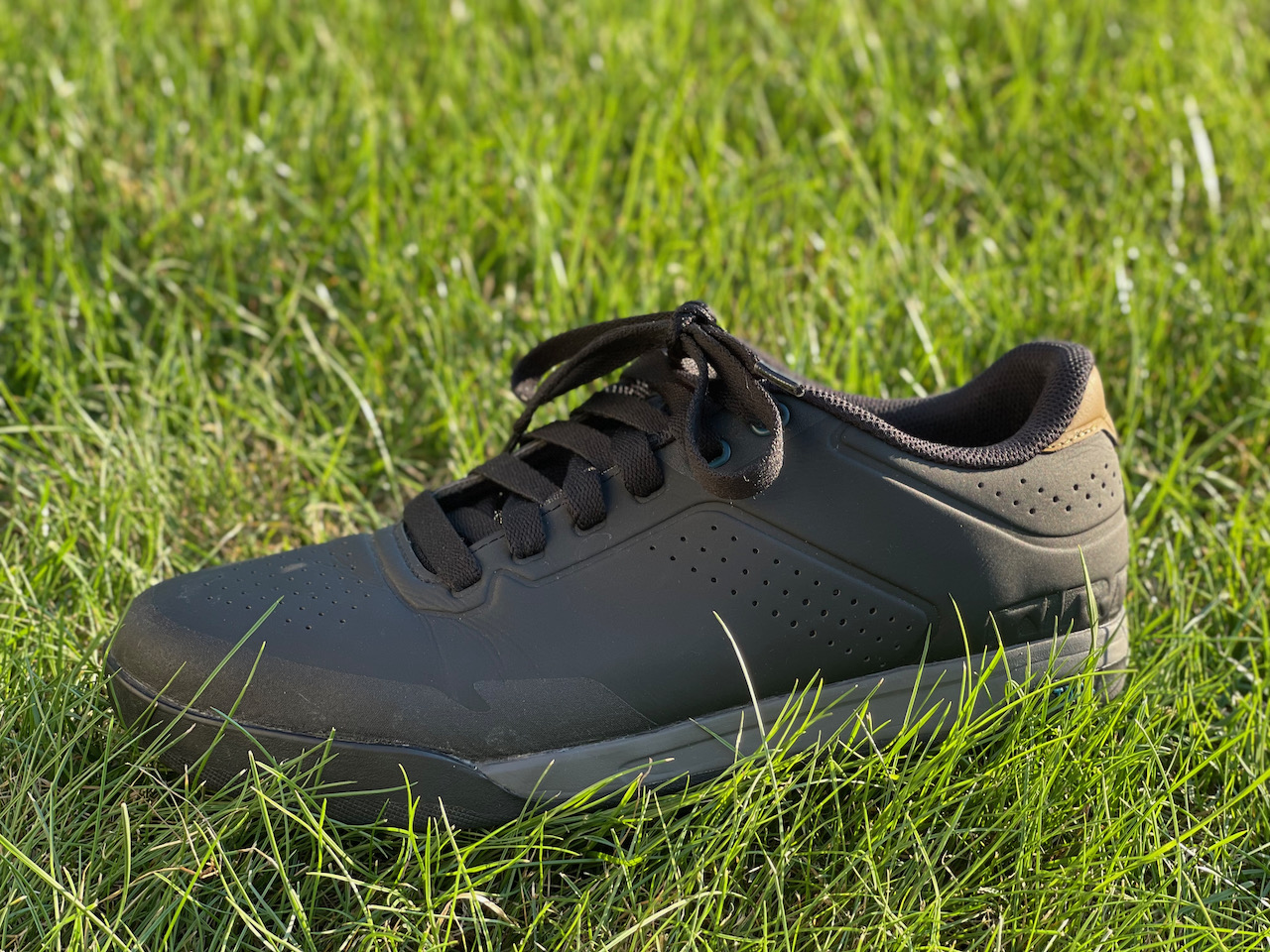 The Latch is Giro’s newest innovation for all-mountain, trail, down-country, or anyone that likes the freedom of flat pedal riding. 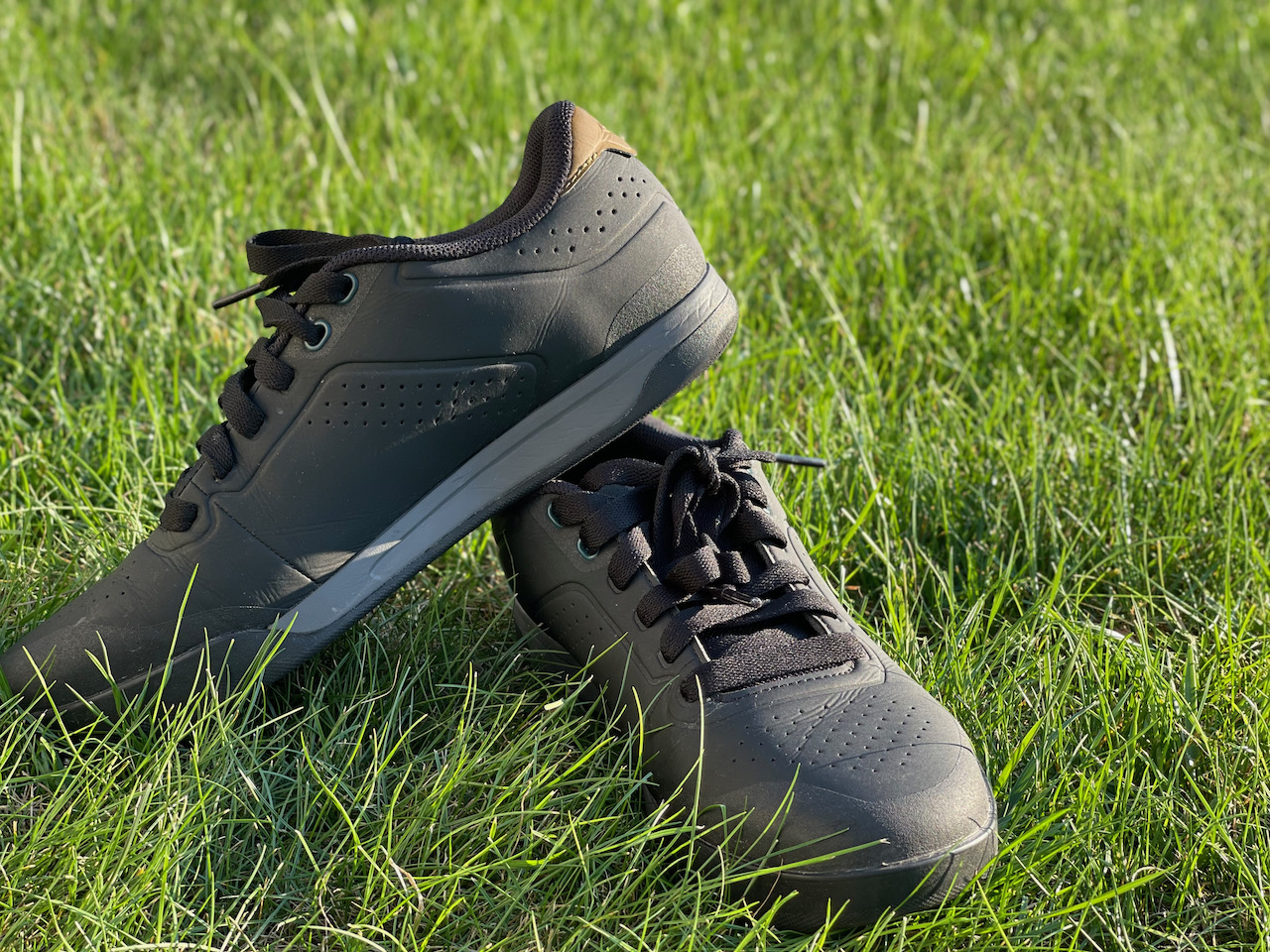 The shoe’s design is classic, with few bells and whistles in the form of over-modern styling. The Latch looks like a skateboard shoe more than a high-tech mountain bike shoe, but don’t be fooled — the tech is hidden nicely. 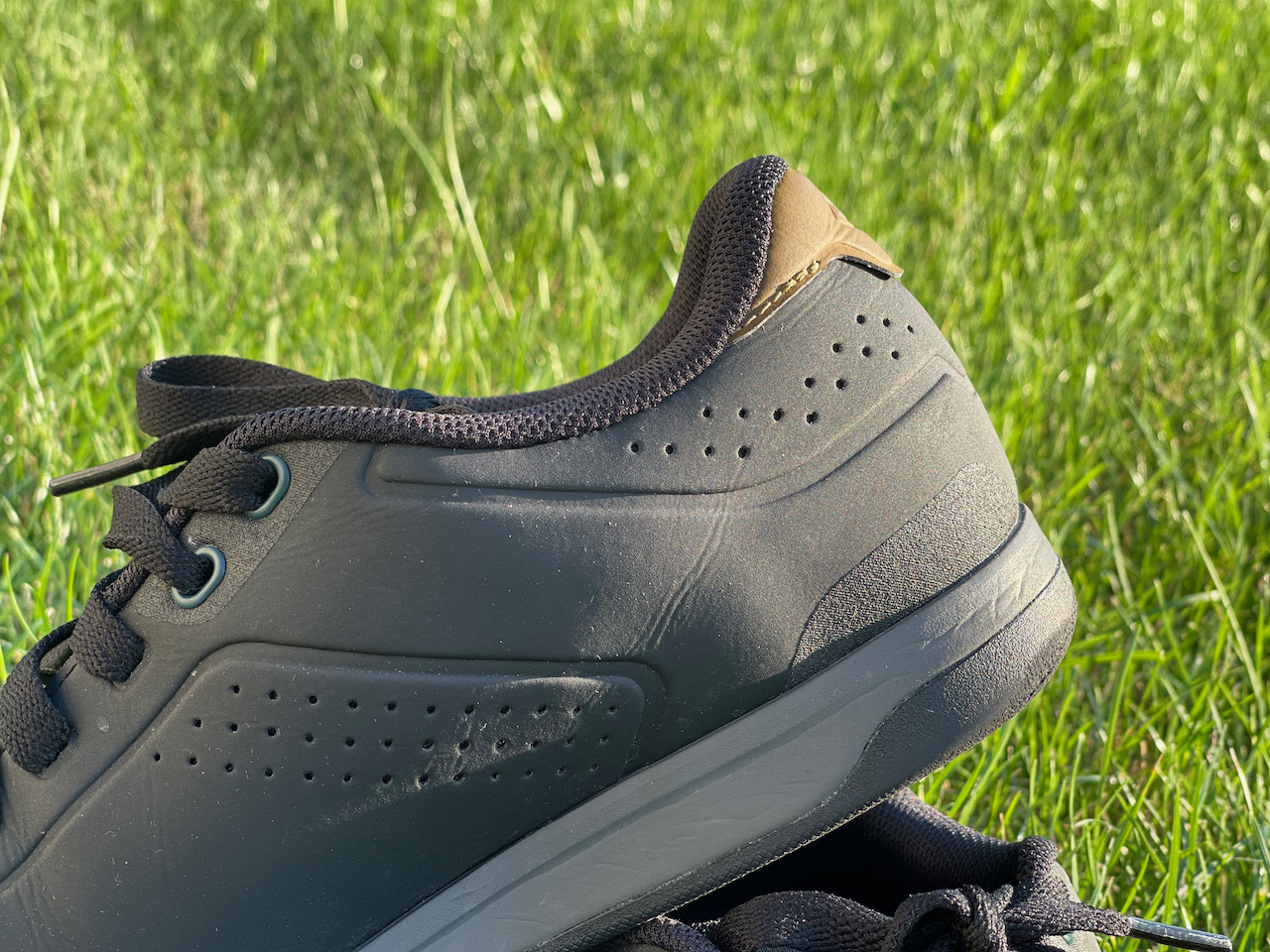 The outer of the Latch is subdued and monochromatic (our test pair), with small pops of color on the lace holes and rear. The toe box has a slight rubber coating and covers the big toe area more than the rest. The toe box, sides, and heels are slightly ventilated but will not let water rush in if you roll through a creek crossing. 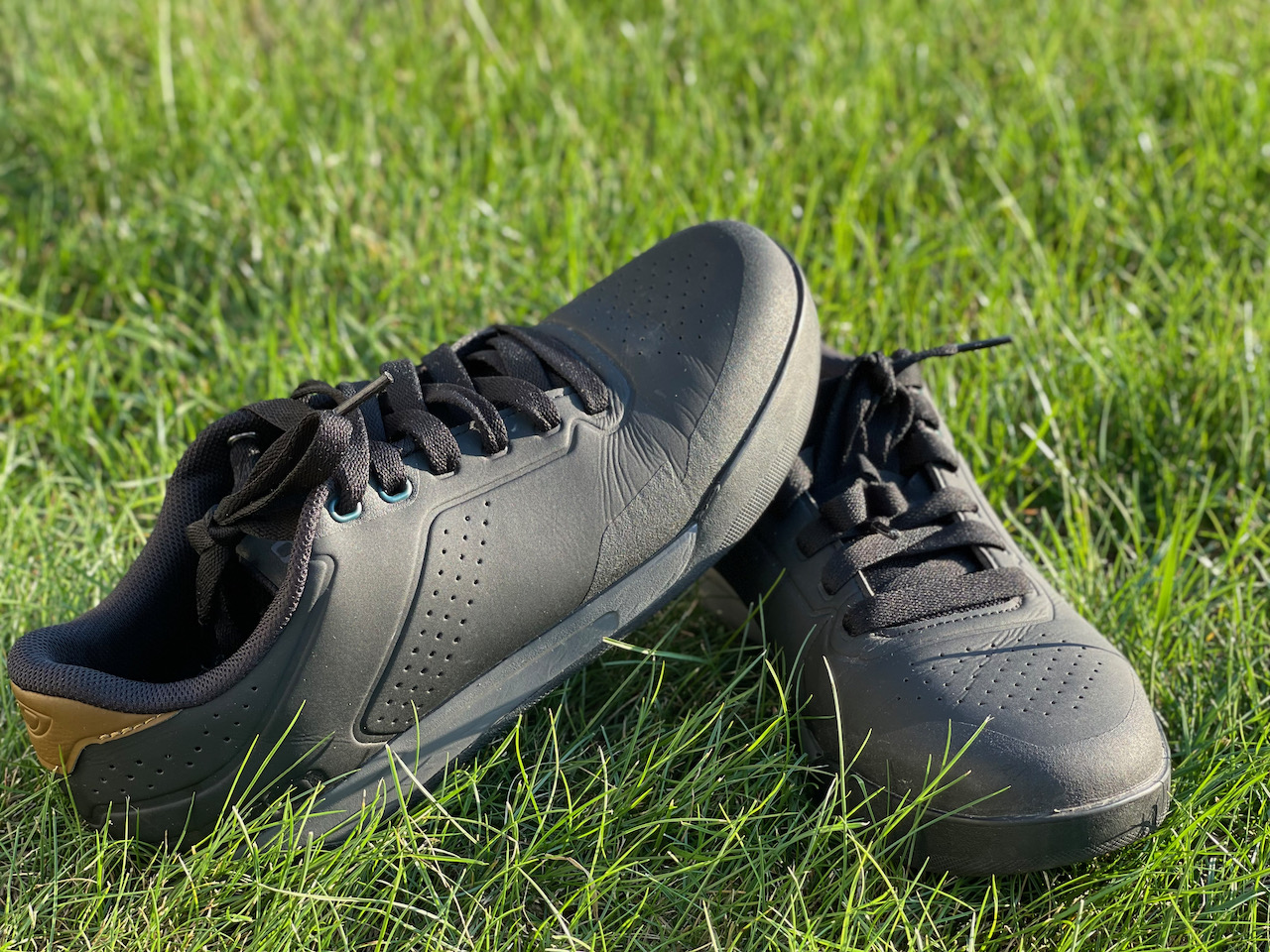 The fabric is a breathable microfiber upper with hydrophobic structural inners. The construction is eye-catching, and there are very few stitches or seams on the Latch. We’re guessing this construction will help with durability and breathability. 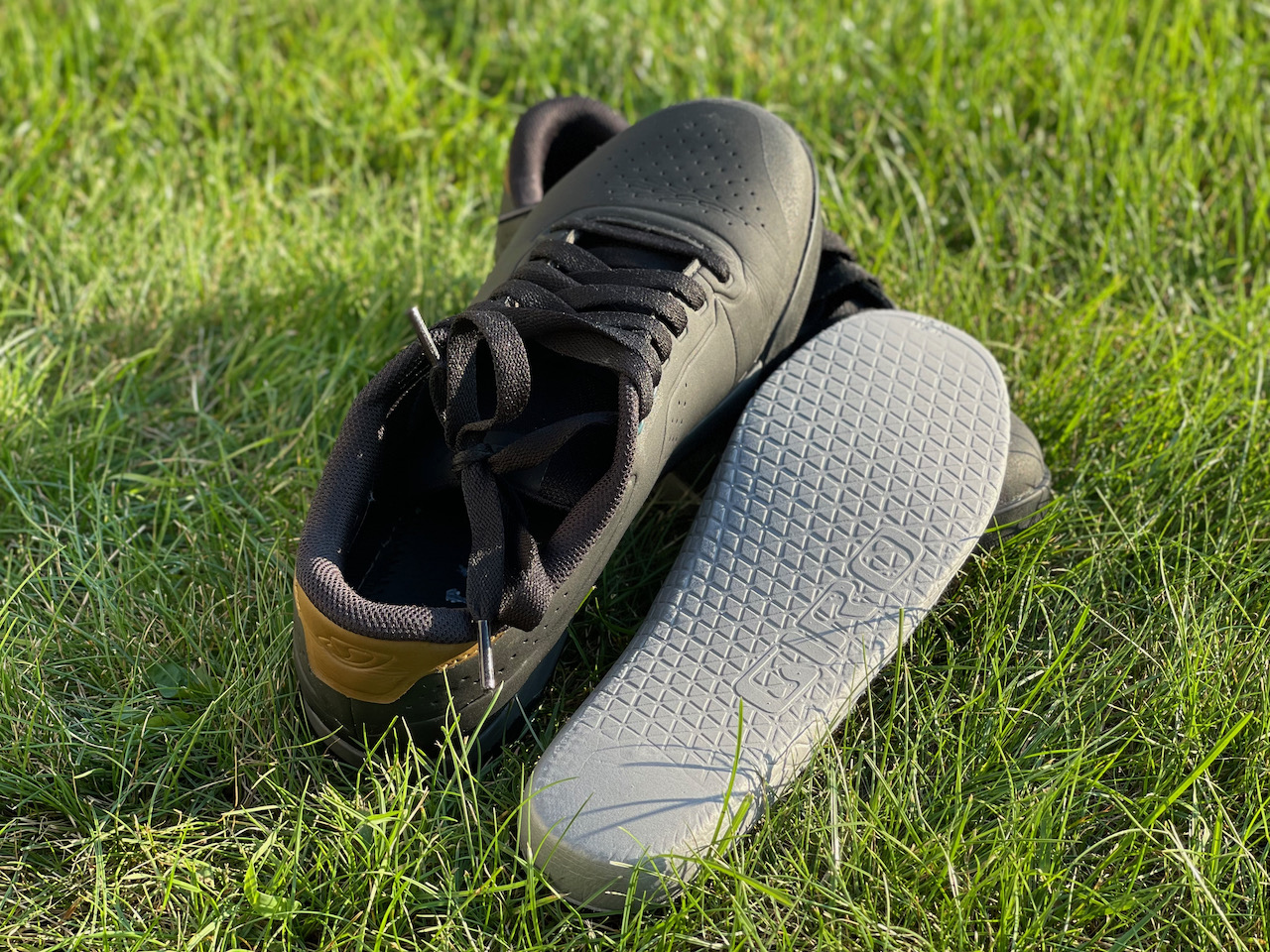 Inside the Latch is where the magic is. I use the word magic because the shoe feels very different, the first time I noticed it when running to get something on my way to the car. The shoes didn’t have a harsh landing sensation, they have a running shoe cushion feel — without the running shoe bulk. The magic is something Giro’s engineering team cooked up, a combination of Tack and Mute. 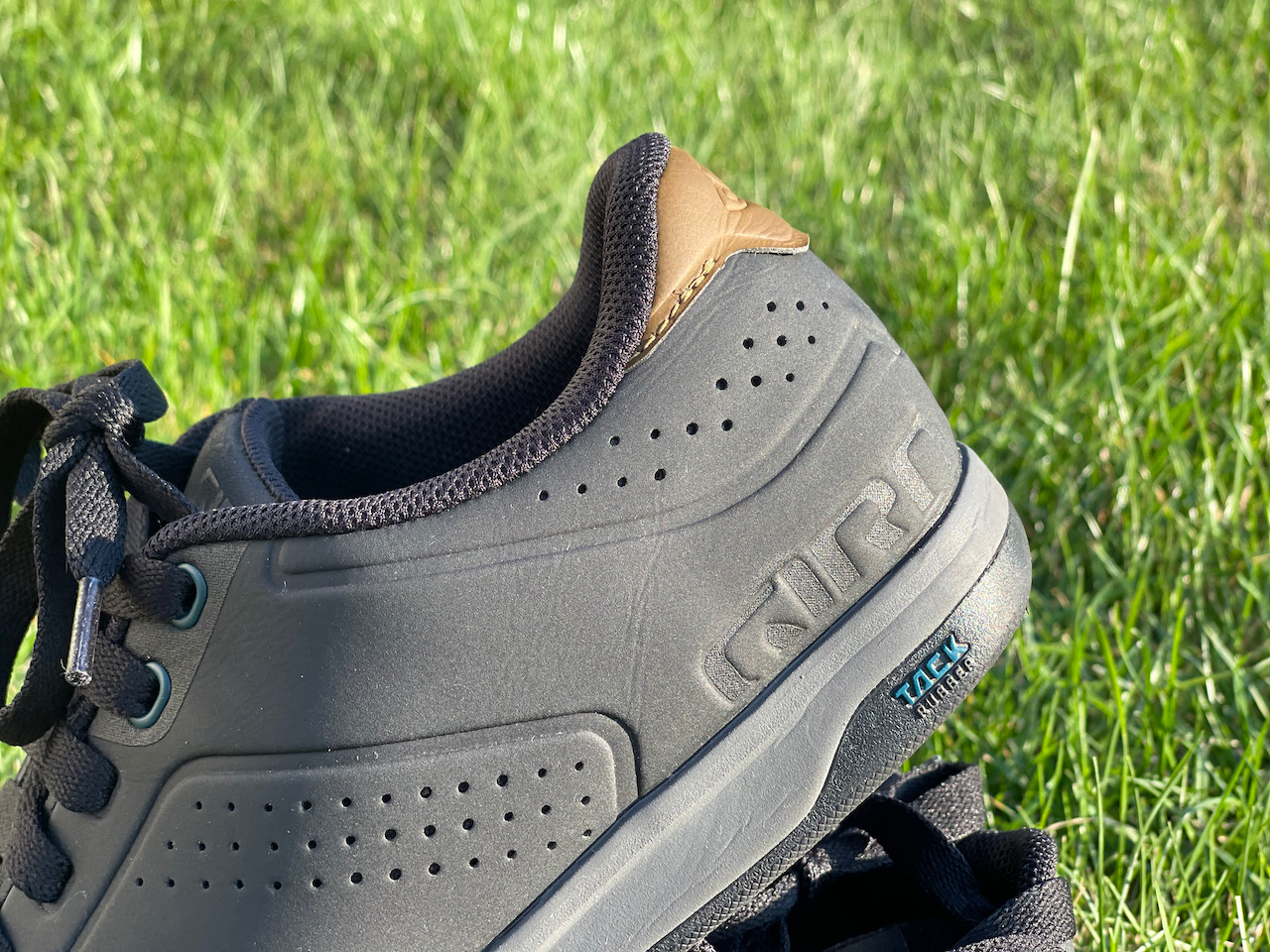 The terms describe the use fairly well; Tack is Giro’s new elastic rubber sole compound and it’s not only grippy but resilient in wear. Mute, on the other hand, is Giro’s slow-rebounding foam. Mute foam is injected into the mid-sole and reduces chatter, vibrations, and foot fatigue. 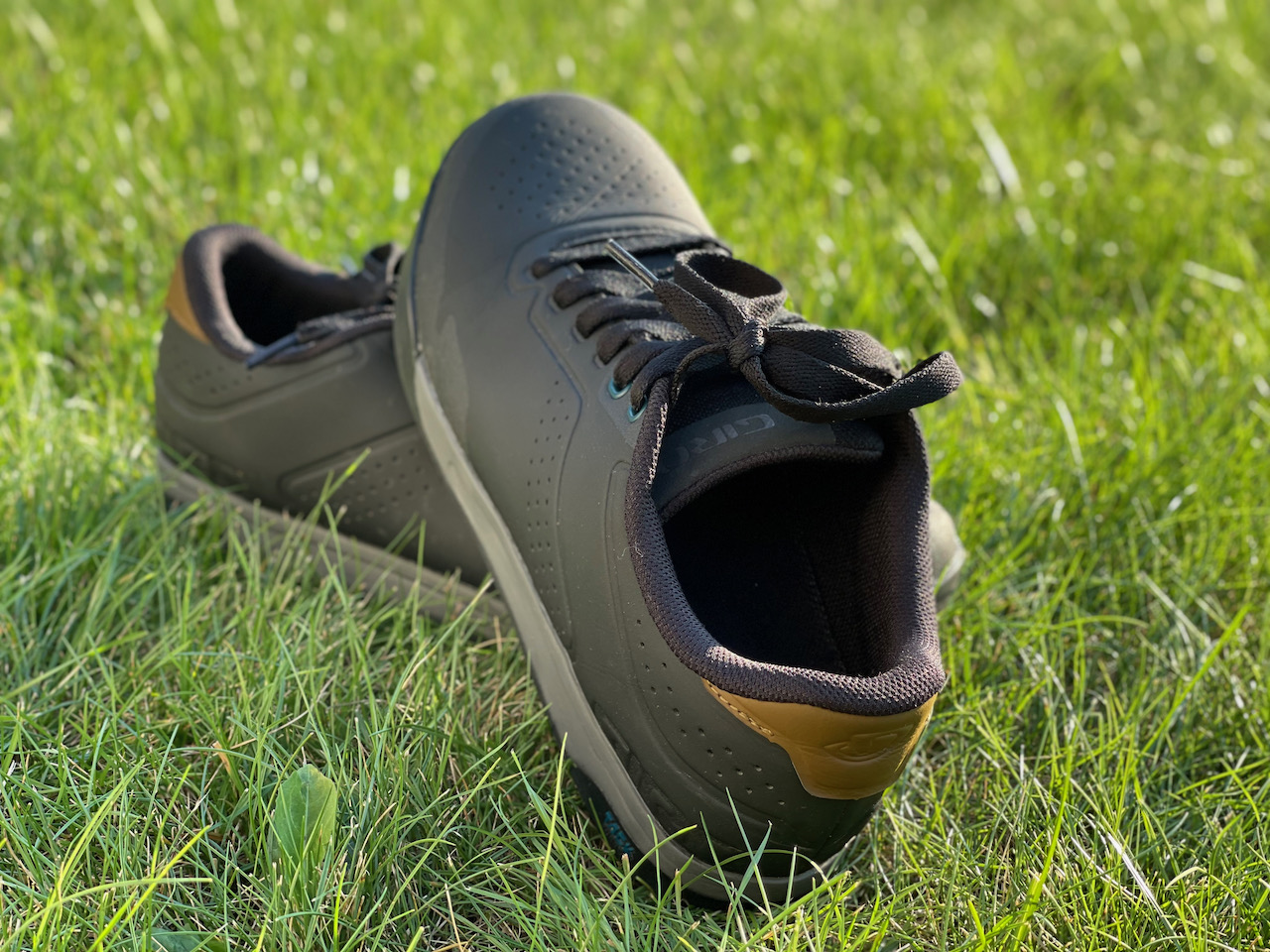 When you combine the Tack and Mute, you get a unique combination of foot comfort while pedaling, the tractile feel of a much slimmer shoe, and micro-suspension to help from getting bounced off the pedals in the root/rocks. 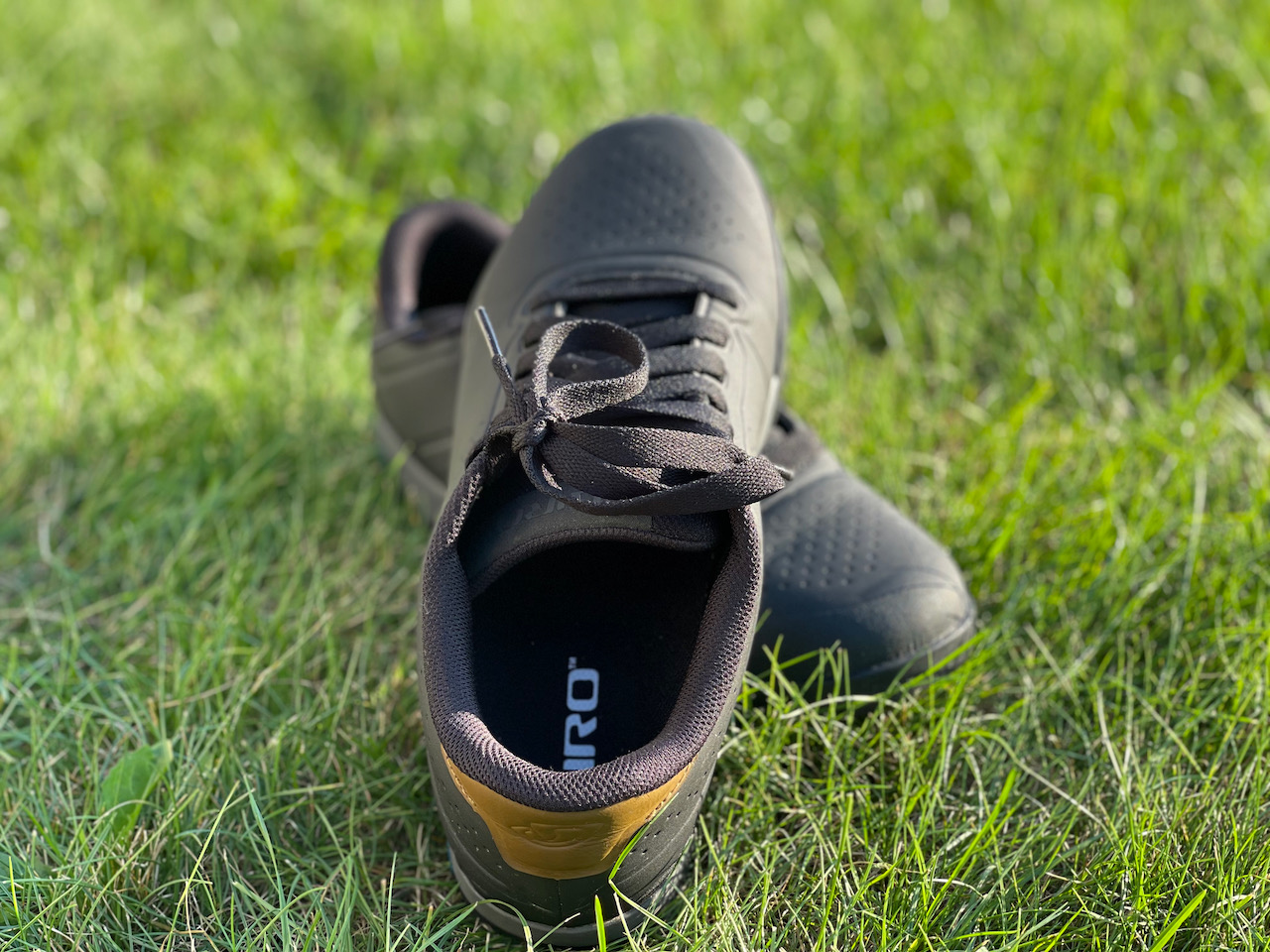 The Mute foam itself was developed with lots of help from Giro team riders who have lots of experience romping through rough trails. The Giro Mute test team featured riders; Reed Boggs, Josh “Loose Dog” Lewis, and Graham Agassiz. 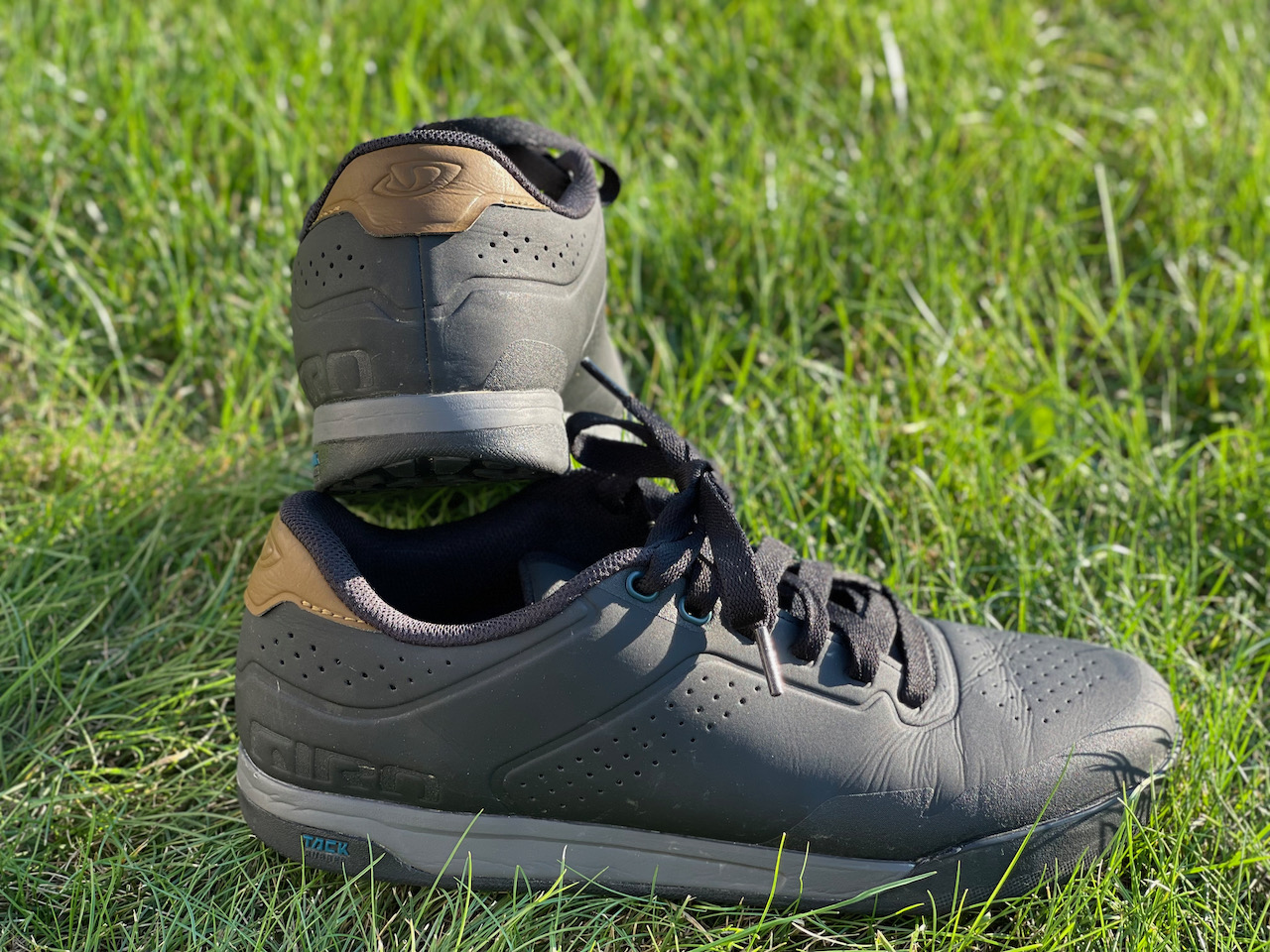 Mute Foam’s most defining characteristic is the slow rebound and the ability to provide a balance between structure and damping properties. The sensation allows riders to reduce bounce upon landing while keeping solid foot to pedal contact and gives riders more stability via the Tack Rubber. 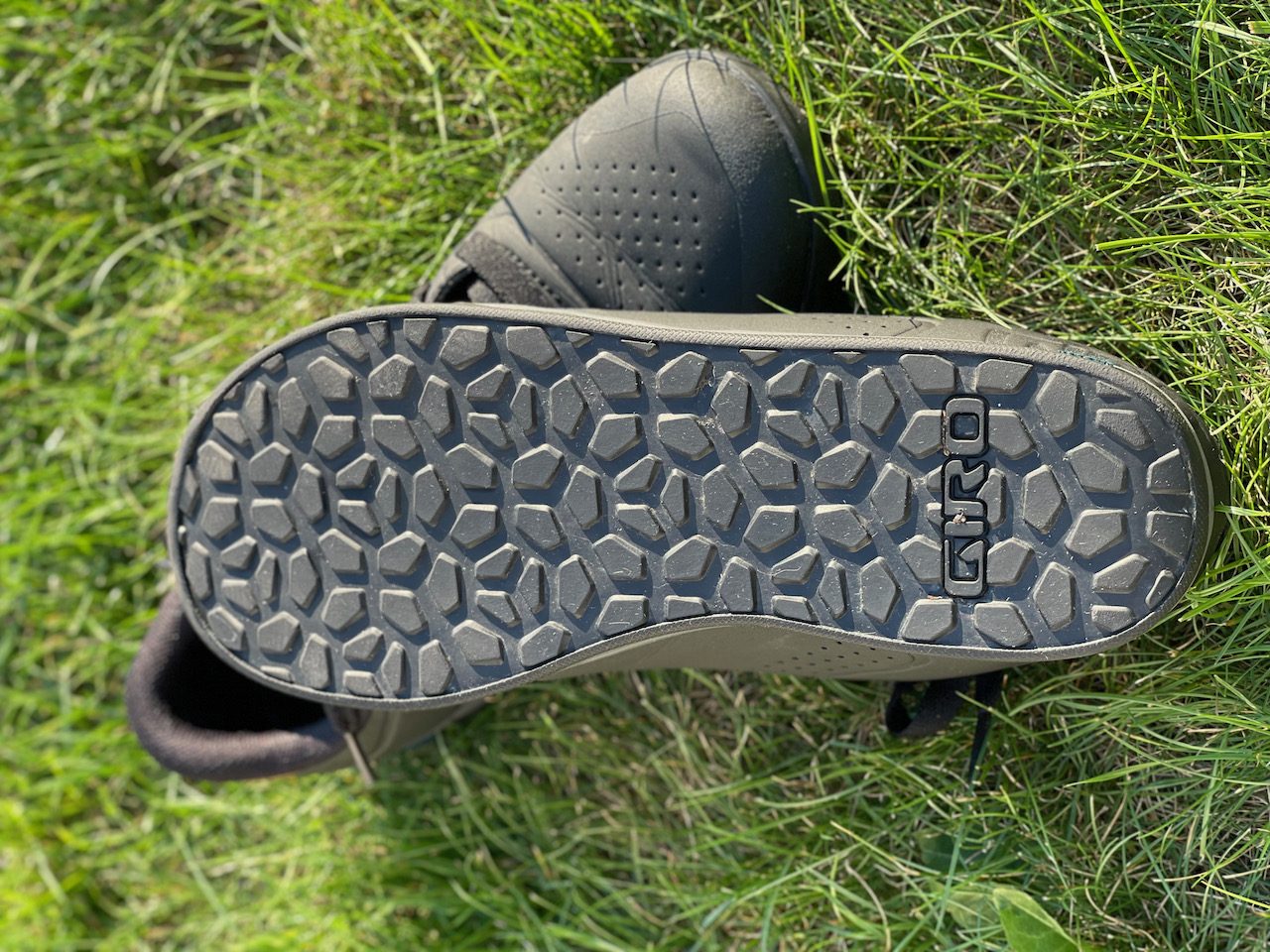 Anyone with a garage full of bike tires knows that rubber isn’t just one compound, and what’s suitable for one day could be bad for another. The new Tack rubber on the Latch is a mix of the expected— sticky grip, but not so soft that you break traction with the pedals. Unexpected — how nicely the shoe feels around the pedals. The sensation is an excellent grip without the need to load the pedal. 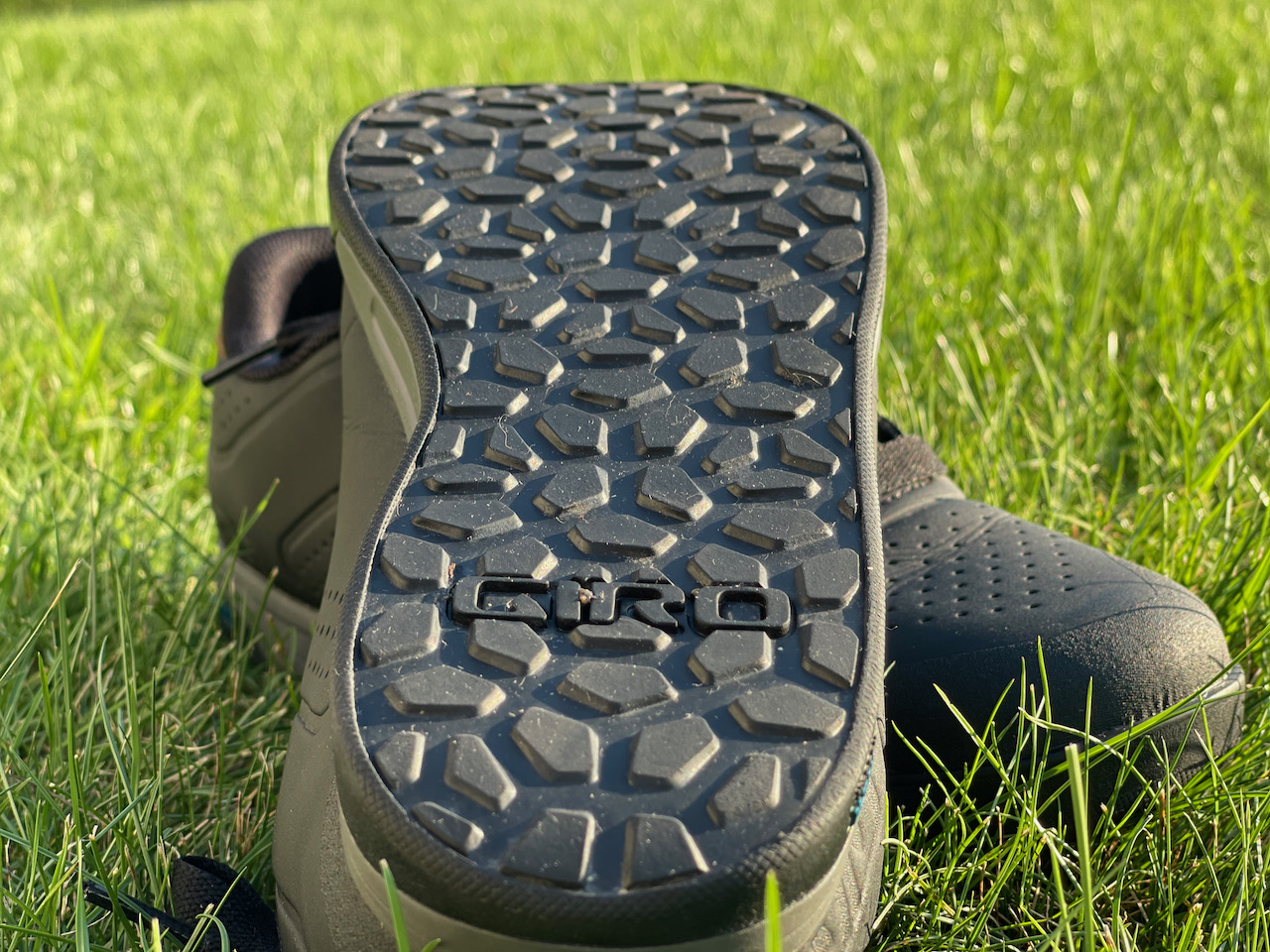 For the tread, Giro uses a new Gamma tread pattern. The design increased negative space between the tread lugs while allowing pedal pins to sit in the chamfered and sloped edges of the lugs, preventing the pins from snagging.

The Latch comes in four colorways for men (unisex) and three in the Latch W (women). There is no difference in construction or material in the Latch vs. Latch W; color options and sizing are the only difference. 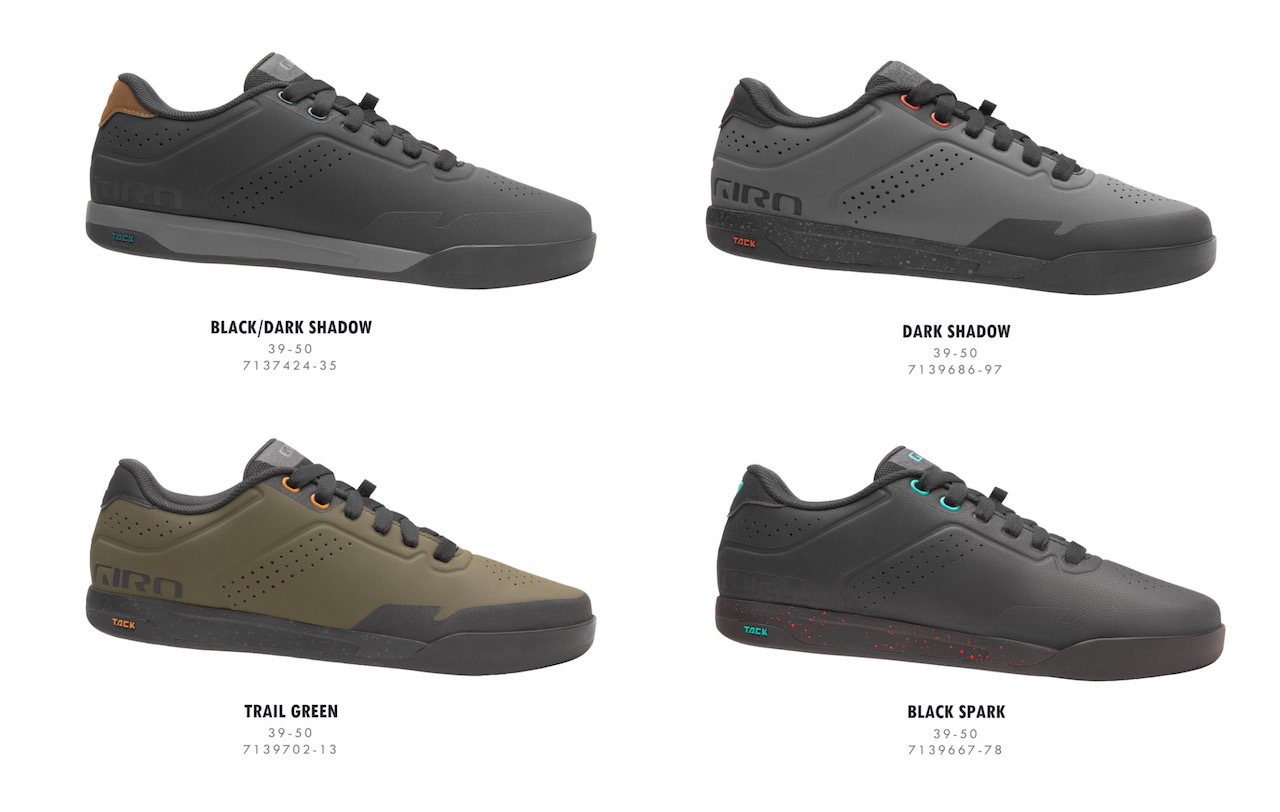 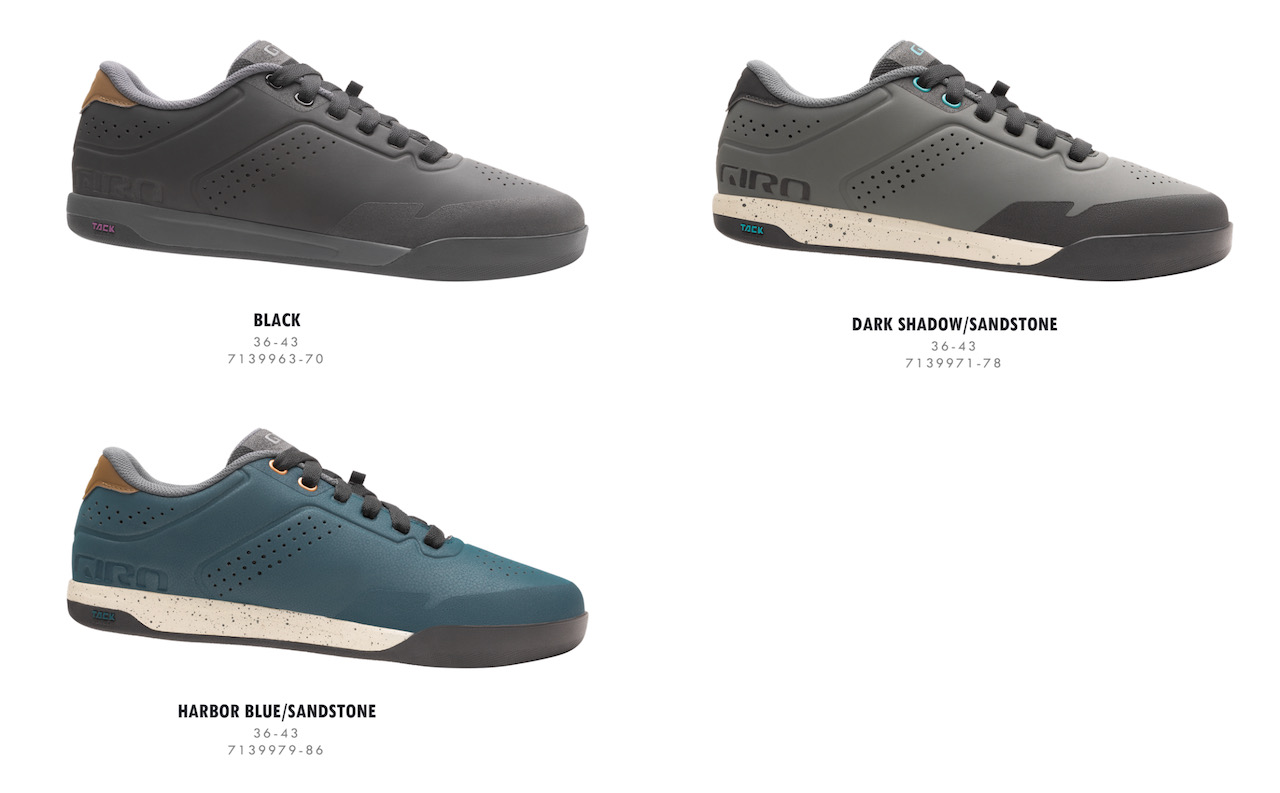 How Does the Giro Latch Fit?

The Giro Latch fits like other shoes I’ve used from them, the size is right on the money, but these are wider than others I’ve sampled. The Latch fits more like a regular shoe than a piece of cycling footwear. The tongue is padded but not so much that it interferes with the performance of the shoe. This feeling could be from Giro lowering the height of the shoe and widening the toe box. 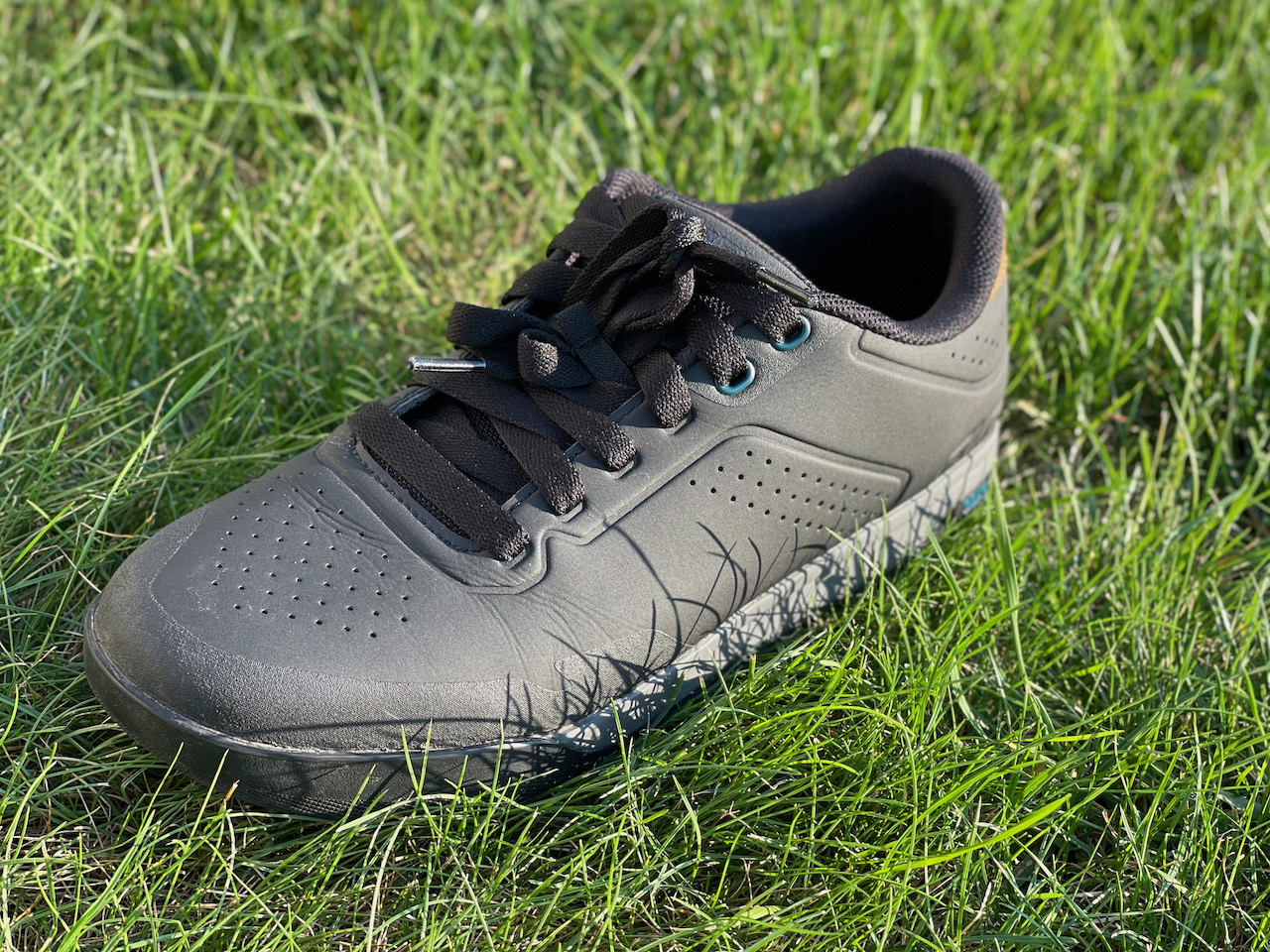 The laces are wide, chunky, and a little stretchy, with a lace holder on the front. The lace material is excellent, so much in fact I’ve yet to have a shoelace come loose, Giro has many lace-up shoes in their catalog, so I think this was perfected over time with the Empire line.

As far as weight goes, the Latch is a light shoe. The Microfiber construction and minimal seam construction help out. Giro states, “the Latch, on average, is 100g lighter than previous models with the men’s 43 weighing in at 334g and women’s 39 weighing in at 300g.” Looking at the older models like the Riddance or the Chamber II, you notice a move to minimal stitching, sole construction, and height — a big difference for the Latch.

Giro Latch —How do they ride?

The fit and the cushion of the Latch give makes them much more comfortable than other flat MTB shoes that I’ve ridden. In most flat MTB shoes I could never feel relaxed, some feeling too stiff, while others felt like the rubber was hard and gripped less. The Latch feels the closest to the Etnies shoes I grew up riding in, with much better grip and less sting (or none) when you land.

You can feel the rubber and foam dampening put to work when you ride over rumble sections of trail. Even on the road, when the knobbies hit the pavement, the overall vibration in the feet is less. The wider toe box in the Latch is quickly notable, the extra space allows for the forefoot and toes to splay out. I felt like I could actually gain greater control by having more overall contact— oddly noticeable. 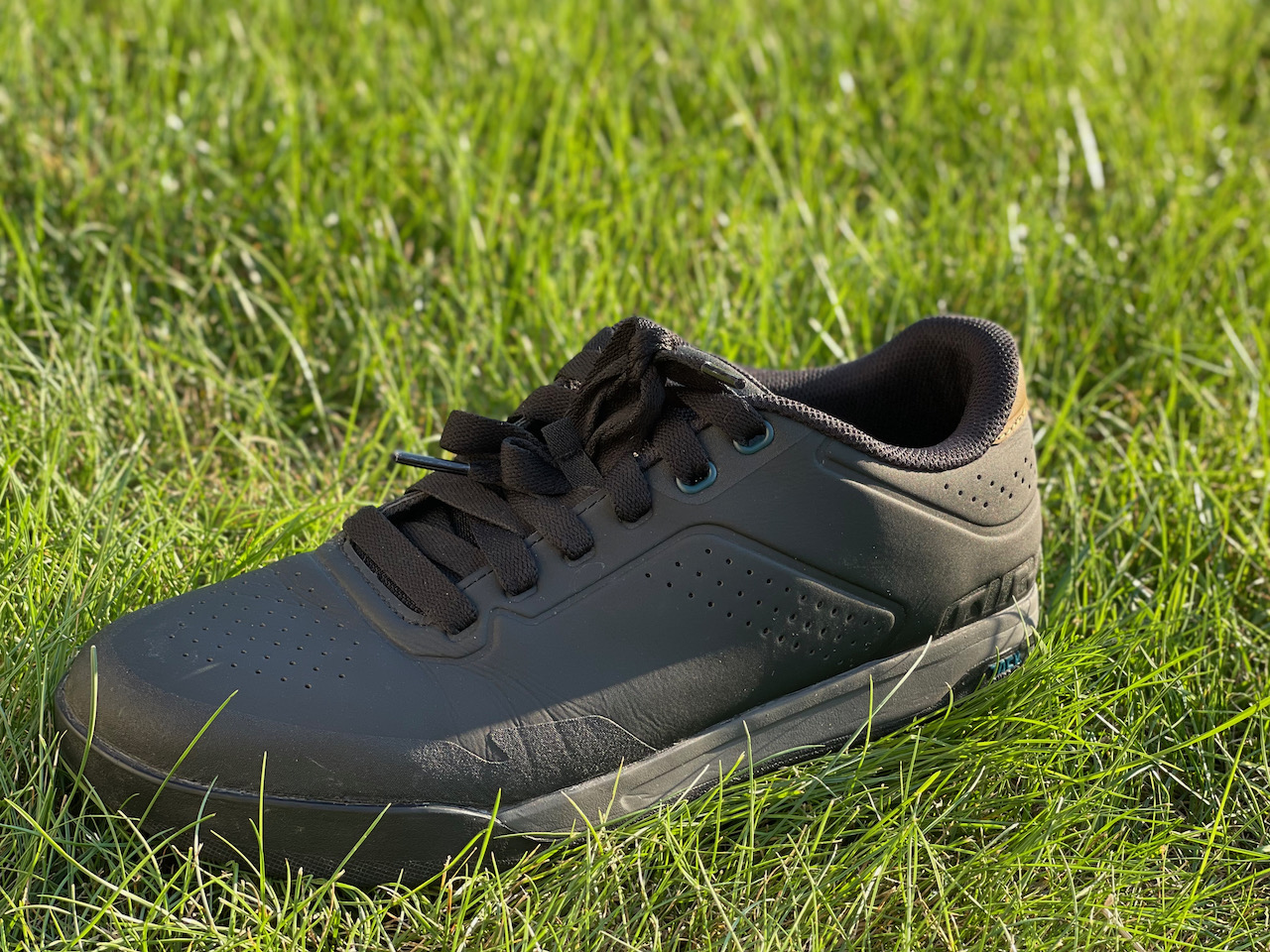 The low profile and low cut near the ankle didn’t change my riding style, but I did get some strikes that otherwise could be avoided with a Half-Cab style shoe. It’s dependent on where you put your feet on the pedals and how you float your foot around though. On my larger platform Race Face Aeffect pedals, this wasn’t as big of an issue; my foot was able to sink into the pedal more. 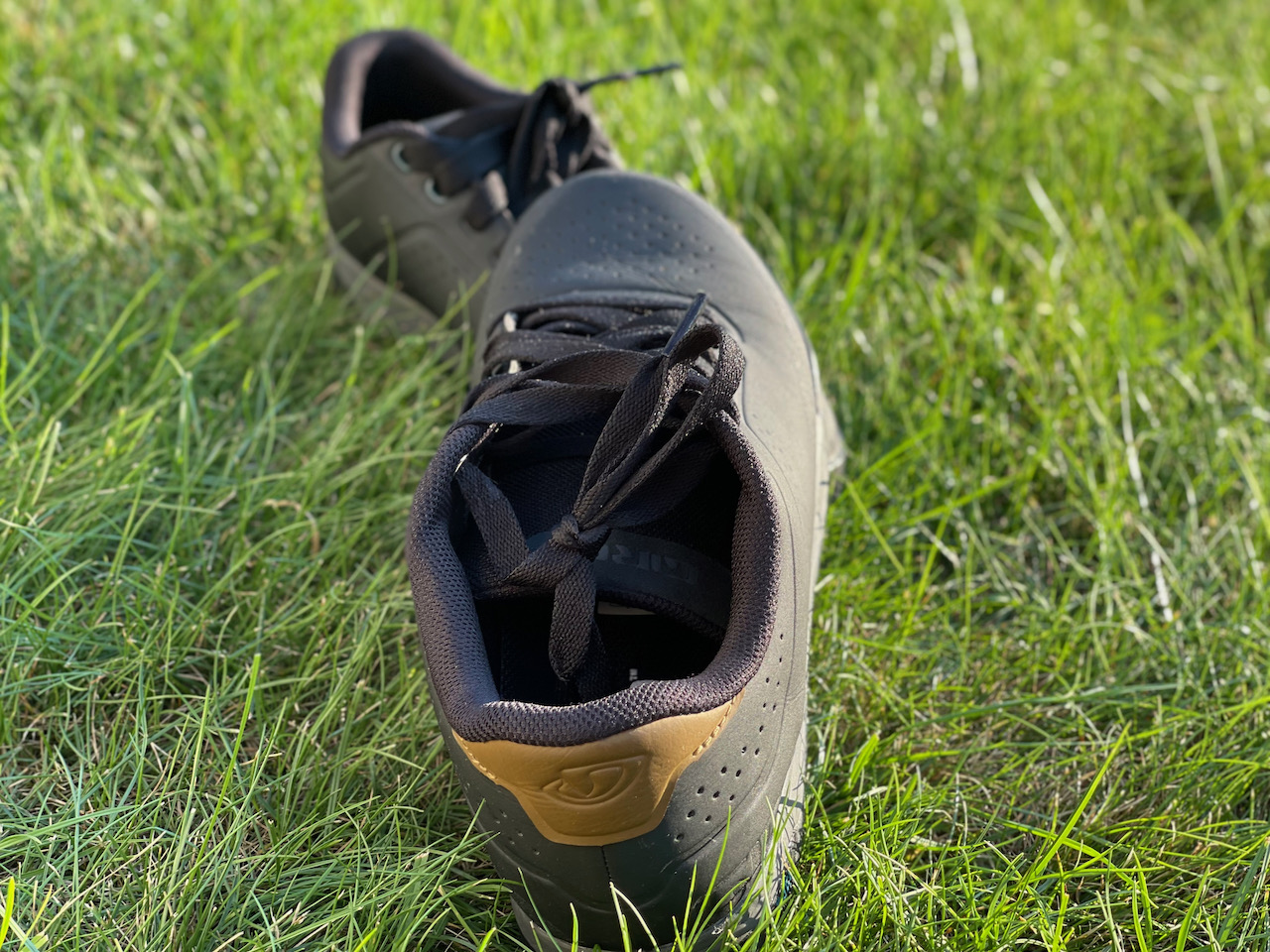 If you’re looking for a shoe that you can wear to the trails — rip the trails, and then to the store — get the groceries, and feel comfortable all the while— this is it. I’ve never had a cycling shoe for review that was as comfortable off the bike as it was on. The Mute foam makes the Latch feel like an athletic shoe, something that you can run in and more importantly one that you can ride in all day.

For more info on the Latch, check out Giro.com

Make a clipless version GIRO! Many enduro, freeride, DH riders have long since moved back to clips.

The lugs are not deep enough and the rubber not grippy enough!