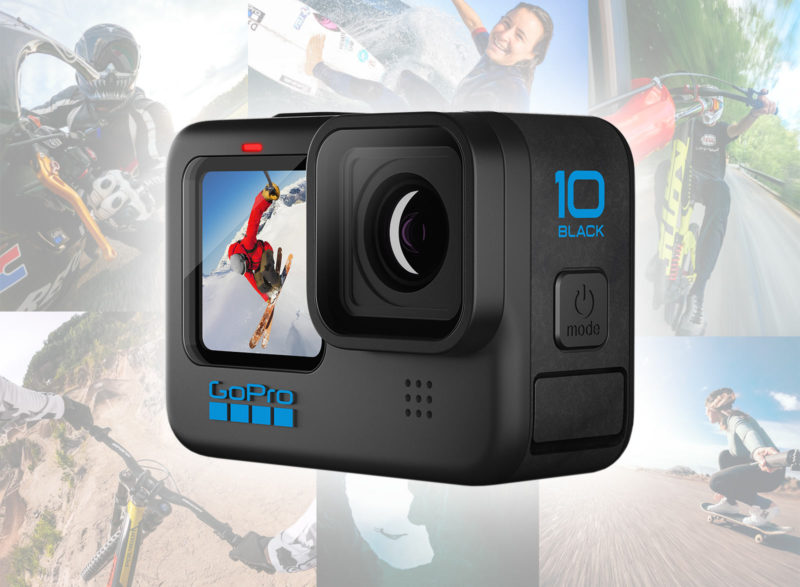 With a new GP2 processor that captures twice the frame rates, next generation HyperSmooth stabilization, smoother interface, and automatic wireless uploads, the all-new GoPro HERO 10 Black is a beast of an action camera.

The goal was to make everything faster, smoother, and easier. Based on the specs, it looks like they’ve done it, with the highlight being twice the framerate at the highest resolutions.

That means 5.3K60, 4K120fps and 2.7K240. That’s typically the realm of top-level DLSRs, now in a camera that fits in your pocket. And, if you have a HERO 9, you’ll appreciate that they’ve made the touchscreen more responsive!

First, the basics: The HERO 10 Black keeps the same dimensions as the HERO 9, meaning it’ll work with all of the same accessories, including the Media Mod, Light Mod, and Max Lens Mod.

Internally, it gets some refreshes that make it 3% lighter, too. Externally, and more importantly, it gets a new hydrophobic lens cover. Like the H9, it’s a removable/replaceable lens, but it’s upgraded with a water-shedding treatment that’s also more scratch resistant and reduces ghosting. 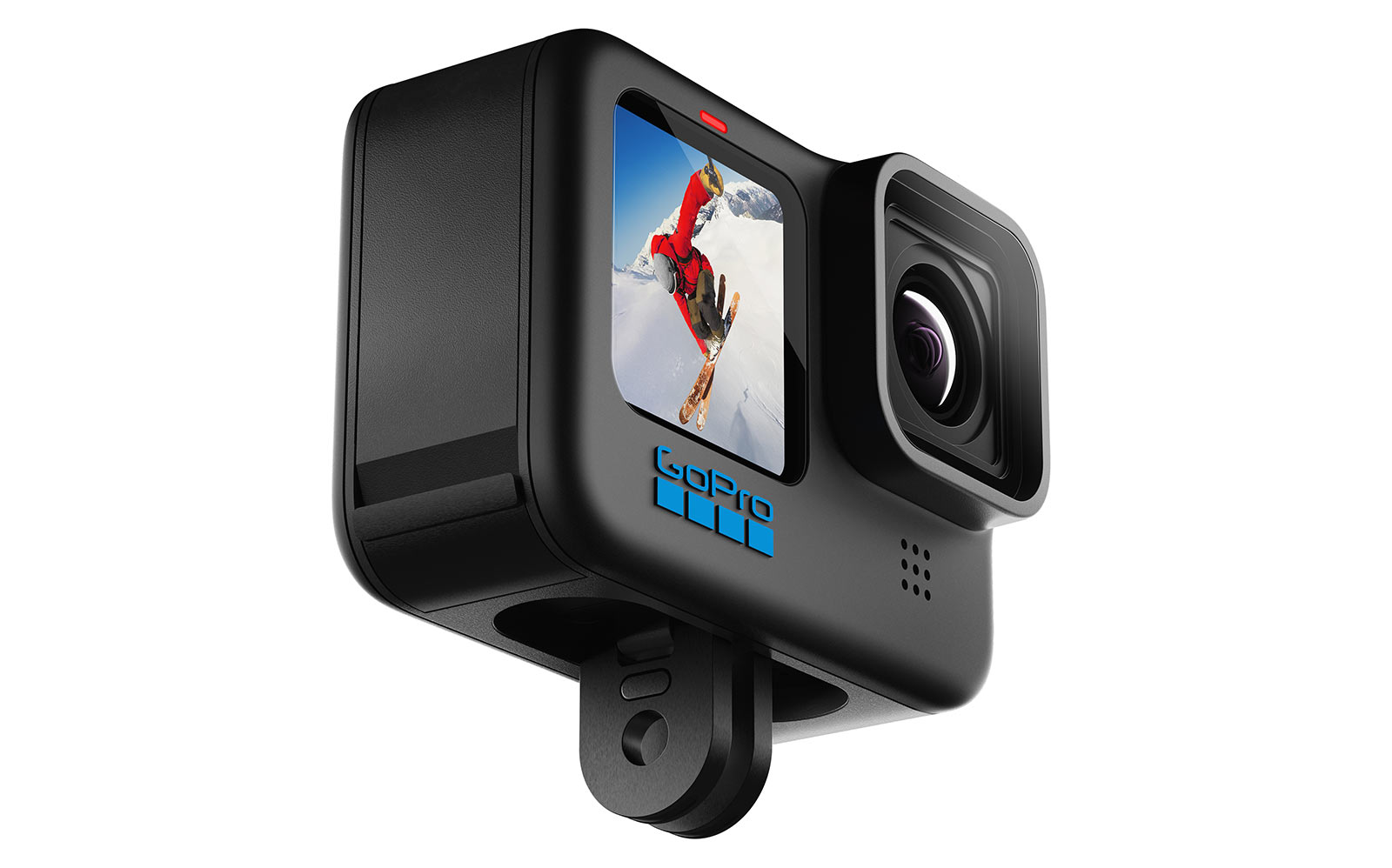 The front screen is there, which was one of the best upgrades from the H9. It’s still waterproof down to 33ft without a case, basically drop-proof, and it uses the built-in mounting fingers so you won’t need a case to attach accessories. 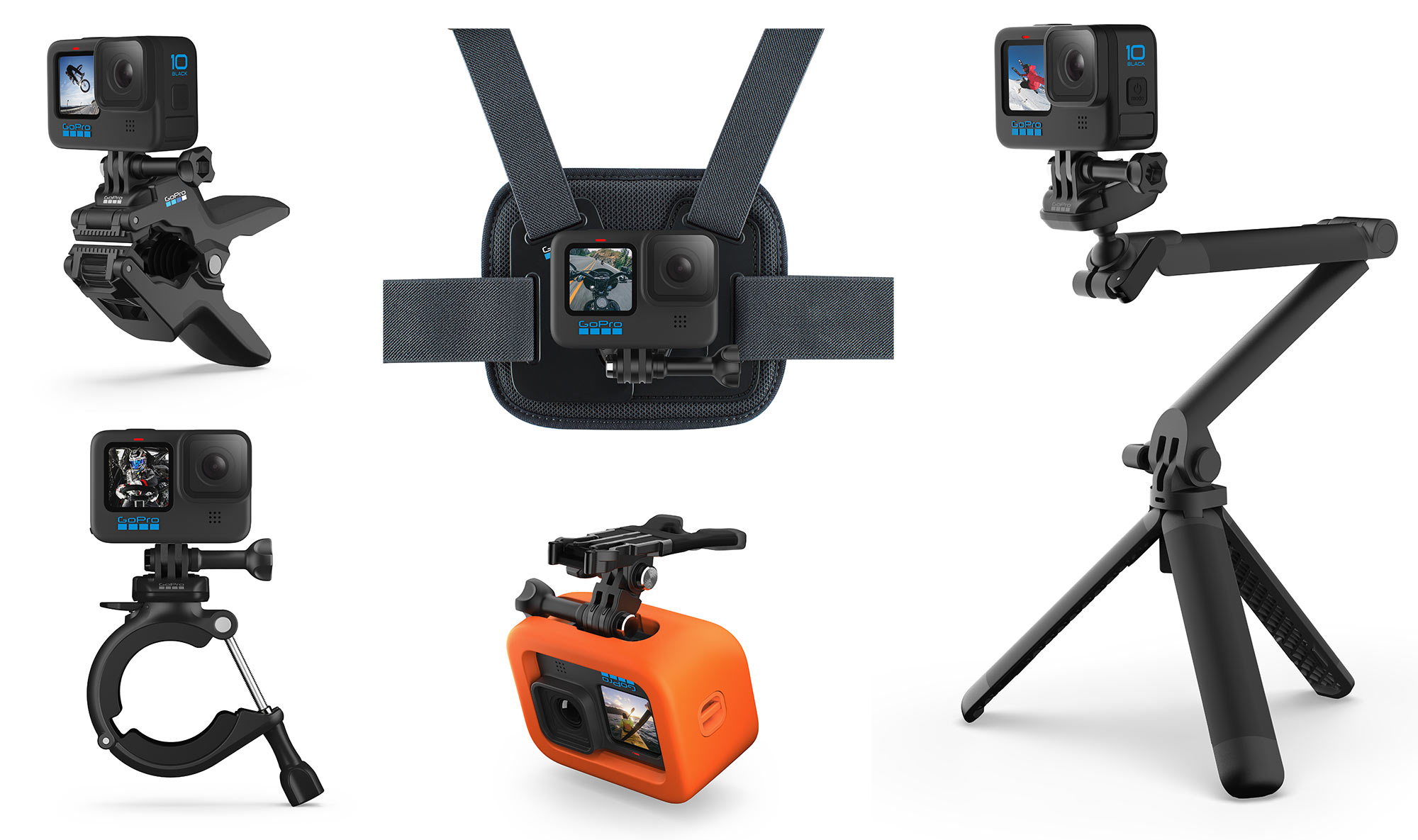 And, like the H9, the new HERO 10 Black comes with a completely plastic-free packaging, inside a travel case you can use. Nice.

The new GP2 processor does draw more power at the new, higher frame rates…the tradeoff for quality is slightly reduced run time. So, if you’re running 5K60 or 4K120, the battery will drain a bit faster. Otherwise, they say its comparable to HERO 9 battery performance.

It uses the same size and speed MicroSD memory cards, with a minimum recommended rating of V30 or UHS-3 to take advantage of the highest frame rates.

Those improved frame rates also get improved stabilization across the board, with HyperSmooth 4.0 able to prevent shaking up to 5K30. Above that, at 5K60, you still get standard HyperSmooth…so, it’s kind of like the HyperSmooth “Boost” mode from the HERO 9 if you want even more stabilization, you’ll just have to drop down a setting for frames-per-second.

Horizon Leveling also improves on the camera, increasing its range from 27º up to 45º without the Max Lens Mod. And, it works with standard and “boosted” HyperSmooth for footage up to 5K60. Here’s the chart:

Horizon Leveling also works in 1080/120 if you need to shoot lower res. Essentially, you also get true gimbal-like performance, without a gimbal. Yes, these modes will crop the footage, but you’ll see what you’re getting on the front and rear screens, so there won’t be any surprises.

It’s worth adding that you can shoot in higher resolution, but switching to, say, 5K60 (meaning 5.3K resolution at 60 frames per second) or 2.7K240 will simply turn HyperSmooth off. So, you won’t get the boosted stabilization, but you’ll get smoother footage that you can slow down in post production or within the Quik app. 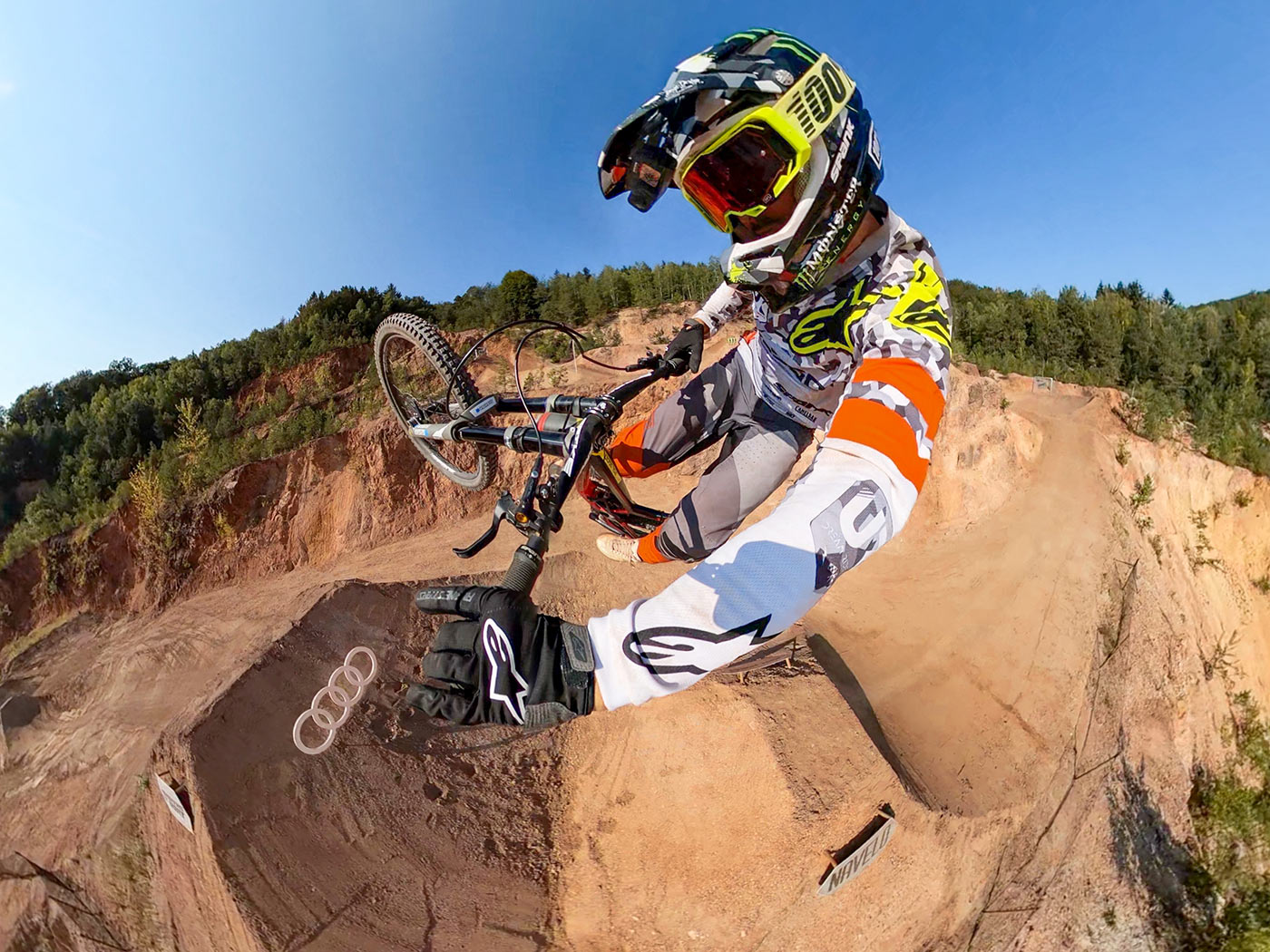 If you have the Max Lens Mod, support for that will come with a post-launch firmware update, which will also include these new resolutions:

With the Max Lens Mod attached, you can turn on Horizon Lock, which keeps the footage level no matter what you do, even if you’re rotating the camera 360º. 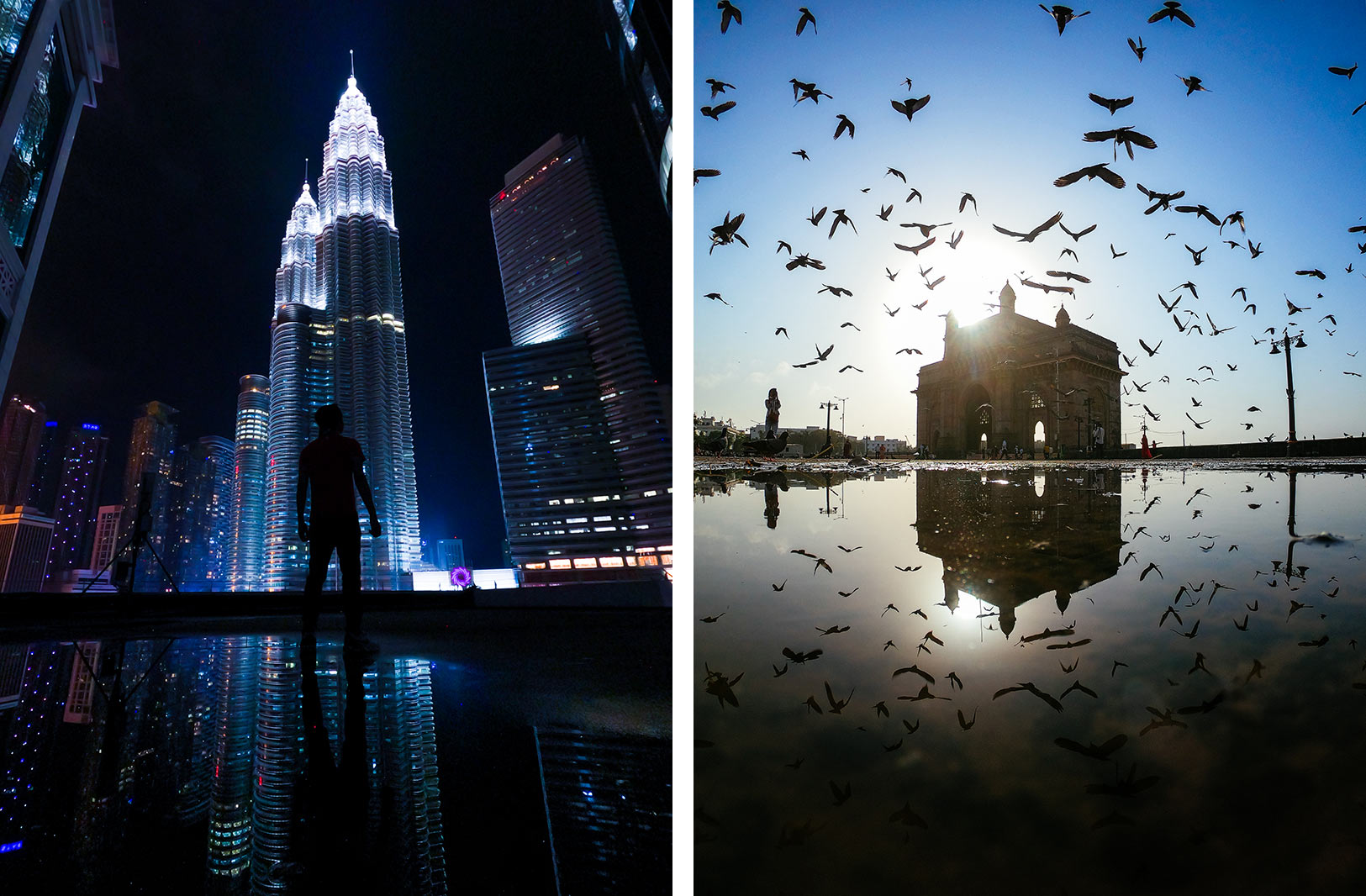 Low light performance has never been a strong point for the HERO cameras, but this one uses “local tone mapping” and “3D noise reduction” along with that faster GP2 processor to better manage details in low light situations.

Even if you don’t shoot a ton at night, you’ll still get better indoor footage and more detail under dense tree cover, or when going in and out of shaded areas. 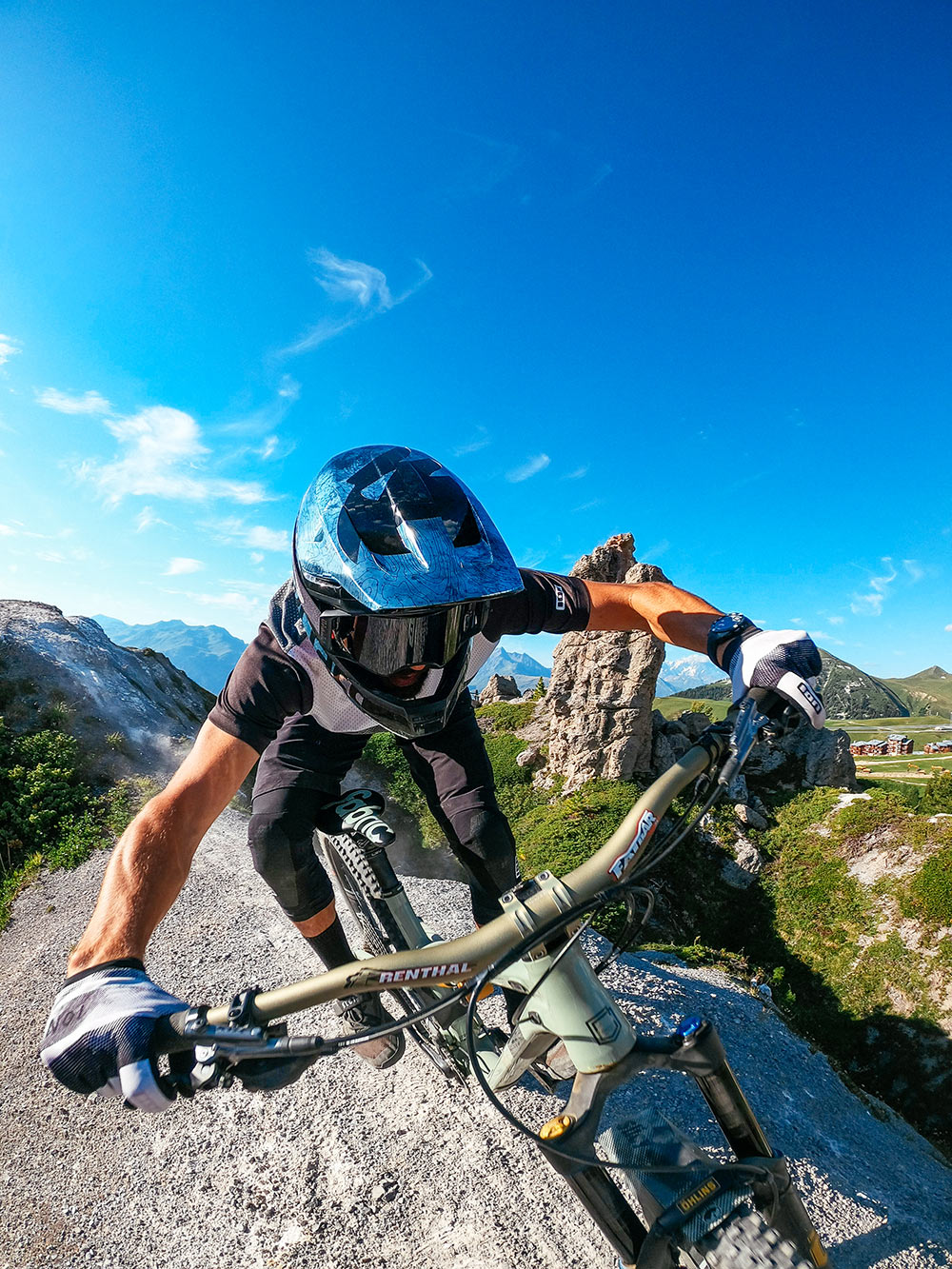 Photos are Better, too

The HERO 10 Black shoots 23MP photos, up from 20MP, and you can get that full resolution in all modes – Burst, Night, SuperPhoto, and RAW.

Or, pull 19.6MP stills out of the 5K 4:3 footage…or 15.3MP from 5K 16:9 footage. Which illustrates the point that you may as well shoot in 4:3 for both video and photo because you’re getting more useable coverage that you can then crop, but you do need to keep that in mind when framing a shot.

If you haven’t been using GoPro’s cloud connectivity with their Plus subscription program, the HERO 10 is going to make it a lot easier…and a lot more likely you’ll take advantage of that free, unlimited cloud-based storage.

Just plug the HERO 10 in to charge when you get home and it will automatically upload your footage to the cloud. With 30% faster WiFi speeds (and wired offloads up to 50% faster), it shouldn’t take long, and then you’ll be able to see every clip within their Quik app.

If you typically edit your action shots from your phone, that gives you easy access to the files so you only need to download the ones you actually want to use. Or, you can now plug the camera directly into your phone and download them directly from the device, too.

For desktop users, all of the media will be available from the Cloud Media Library when you log in through the Plus portal on any browser.

The GoPro HERO 10 Black can livestream in 1080p HD with a 132º wide angle, and the front screen helps you frame the shot.

For live streamers, the HERO 10 will now stabilize your footage with HyperSmooth 4.0 in real time to ensure smooth video even as you walk around and move the camera from hand to hand (or get your kids or friends to help you, even if they don’t know what they’re doing).

Pricing increases slightly. MSRP is $399 for GoPro subscribers for the Camera with battery, or get it with a clip-mount, mini-tripod, extra battery, and SD card for $449 for subscribers. Available now.

And basically, you want to buy it direct from GoPro to get the reduced price bundled with the GoPro Plus subscription because, mainly, the camera is cheaper that way.

But you also get $100 of up to three new cameras per year, up to 50% off all accessories, guaranteed damage replacement, the free (unlimited!) cloud storage of full resolution video and photo files with automatic upload, and premium editing tools inside their Quik app.

What’s the battery life like? Also, does it overheat if you try to record a hour straight at room temp like the 9 does?