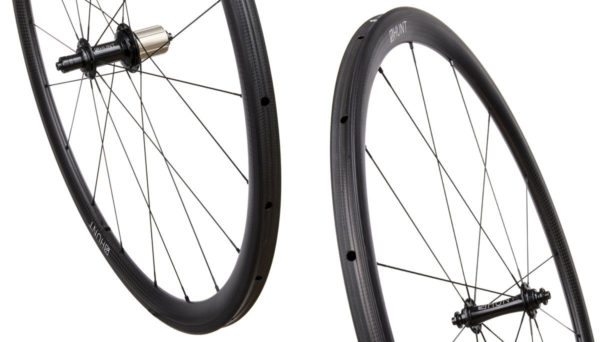 Built to help reigning UK Hill Climb Champion Dan Evans take more KOMs, the new Hunt Hill Climb SL carbon tubulars weigh a scant 991g. What makes them really special, though, is that Hunt (and Dan) says they’re also stiff enough for out of the saddle attacks on gravity. That’s something not all superlight wheels can say.

The wheels use a new carbon tubular rim that weighs in at a claimed 280g. They measure 23mm wide and 30mm deep, designed for narrow and light 23mm tubulars…because they’re really only for climbing. Hunt says if you want something for long alpine descents and general road riding, stick to their tubeless-ready carbon clinchers. But when every possible gram matters for racing up the hill, these are it.

The wheels weigh in at 424g up front, 567g in the rear (on their scale). Weight savings comes from more than just the rims – they chose Pillar Megalite bladed spokes (3.4g each, 16 front and 20 rear) and paired them with their Sprint SL J-Bend hubs. Those get a 7.5º engagement inside a CNC’d alloy hub shell and 7075-T6 alloy axle, EZO bearings and low friction seals.

They come with spare parts, a spoke wrench and aero spoke holder, and ti skewers (which are not included in the weight).

Hunt puts them through the same safety and durability testing as their other wheels, but do have a 78kg (~172lbs) rider weight limit…which should include anything you’re stuffing in your jerseys and wearing. Even then, if you’re pushing the upper limits of that weight, they should be checked by your mechanic every couple months. Which is to say, they’re purpose built for race day. Like at the Hill Climb World Champs in Santa Barbara, California, where Dan will be showing them off later this year. Retail price is $1,428.98 (£1,089 / €1,222.92).

Disappointing they didn’t use Berd spokes and could have shaved another 50 grams off of the wheelset while improving the overall performance.

thesteve4761
Reply to  The Dude

Which would add cost, make finding replacements near impossible, and generally diverge from the way Hunt has focused their products/brand.

So far, Berd exists on forums and websites. Vaporware.

I’ve built two sets of wheels with them. They take a few weeks to get, but definitely not vaporware.

Two theoretical sets on a comments string does not a product make.

I don’t know what more you want or what Berd has done to hurt you.

They appear to be an extremely small company, but the stuff exists. It may take some time to get them (one order took two weeks, another took ~six weeks)

But, I mean I got the spokes built em up and sent my customer on their merry way.

Here is one pair https://www.reddit.com/r/wheelbuild/comments/8qxpbt/berd_spokes_round_two_kinlin_xr200_berd_polymer/

I have to say that I like what hunt is doing Honest products with classy graphics at reasonable prices. Not factory direct pricing but close enough to justify for the product development and peace of mind.

My only request would be a quieter hub to match their aesthetics.

“Stiff enough” what number are we talking about? 55N/mm as the very stiff wheels (Mavic ccu, Corima MCC) 40+/mm as the stiffer light wheels (Shimano c24 tubular) or 30N/mm like a lot of sub kg wheels that are quite flexible? Mechanically there a lot of challenges for such a setup to be stiffer than the 30N/mm, low spoke counts, very light (then flexier) spokes and std hub geometry.

These look alright for “budget” climbing wheels but you can go way lighter than this with a true weight weenie build. You can get well under 700g with an Ax lightness/Berd/Extralite build while still having a much higher weight limit. Buying pre-built, generic wheels is also pretty lame in the weight weenie sphere.

how is spending your money wisely lame?

Hi Leonardo, thanks ever so much for your message, it’s obviously great for us to listen to feedback from riders like yourself so cheers for taking the time. Would you mind showing us where/how you might be able to assemble the above wheelset for 1/4 of the price we’re offering them at? Obviously would be awesome if we could more-than-half our price and offer the same wheelset as is being described above. Just to give you an idea of how we operate, we’re proud to work with suppliers in the far east really pushing the boundaries of manufacturing standards. We work with a supplier widely considered to be one of the very best in Taiwan, and actually spend around 50% more on our rims than we might if we bought an off-the-peg equivalent from mainland China. Similarly, the hubs spec’d on this particular wheelset cost us around 30% more than if we’d gone for Novatec hubs, as they come with a high engagement of just 7.5 degree – something I’m unaware of being available on any Novatec road hub. The extra investment in the rims is also definitely worth it – upon numerous visits to Taiwan across the last few years, our senior wheel engineer (formerly of Campagnolo/Fulcrum and 3T) was amazed at just how perfectly smooth and well-finished the rims were once the molds were opened, which is indicative of an incredibly low void rate. Low void rates in carbon rims point directly to strong results in terms of structural integrity. Added to this, the carbon used in the pre-preg for this particular wheelset weighs just 75gsm, so is of incredibly high quality for the intended usage. Obviously, for a comparable wheelset you would need to factor this in when illustrating the “cheap Chinese carbon rims” you have in mind. Thanks again for your input, as mentioned before it’s really valuable to listen to feedback from riders all over, as ultimately it just helps us develop and produce better wheels! I look forward to seeing the wheelset you might be able to assemble for £250-260 ($320-340) that includes rigorous QC & testing, a 2-year warranty and the generally positive & pain-free experience we like to think that comes with ordering HUNT wheels. Thanks again & warm regards, Ollie Gray (Hunt Brand Manager)

> We work with a supplier widely considered to be one of the very best in Taiwan, and actually spend around 50% more on our rims than we might if we bought an off-the-peg equivalent from mainland China.

If your business model has barriers to entry other than your supply chain costs, why not just name the supplier?

Does the weight include the skewers?