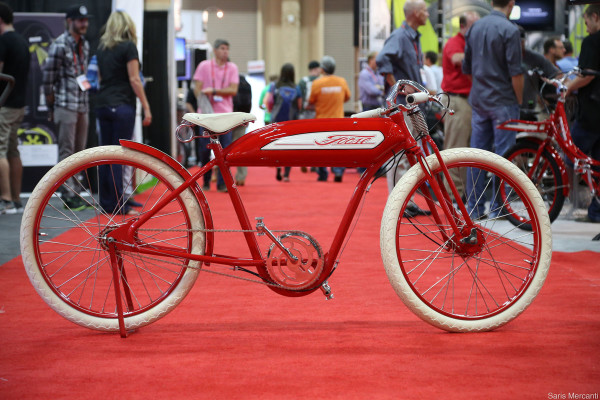 If you’re a fan of hot rod culture or watching the TV show Overhaulin, then you might be interested in a new line of cruisers being designed by automative designer and fabricator Chip Foose.

The bicycles are still in the development stages, and they’re working on lowering pricing, but you can cruise past the break for more images of the new concepts… The old school kickstand is a nice touch. For production, the frame will see some tweaks in order to make it more comfortable when riding longer distances. This cruiser was the other Chip-designed model on display. It had custom pinstriping throughout. All the frames were built in conjunction with Micargi Bicycles.

That looks like a board track racer than a hotrod.

So proud he sticker signed the american BB shell.

I do not understand Dougal’s comment that they look like “the sort of thing you can buy in Walmart for $100”? I have never seen anything in Walmart like this.

I think these are cool, but you have to remember that they are not appealing to us riders that are likely on this site. If it gets more people on bikes then I don’t care what it looks like.

Still, any word on ballpark pricing? What will distribution look like?

Cool shifter set up, the bottom bracket not so much.

Not going for the design. Looks like the bikes will be super heavy and difficult to pedal any sort of distance.

RatRodBikes.com has a lot of rides similar to these, but even more extreme.

man does that springer front end bring back memories from the 70s when I lusted after bikes like that. Overcome with nostalgia now…

I wonder what the last time was a bike was released at interbike with ashatabula cranks?

Do motorcycle designers talk about stack and reach?

I love those bikes except the fake gas tank. It’s a freakin bike. If you are going to go for design aesthetics, then use the visual language correctly. With that tank it looks like; “fake motorcycle”.

Double up the top tubes for implied reference instead of going so corn ball. Or perhaps just go all the way and throw in a fake motor.

The loop of the frame at the bottom says fake motorcycle. They used to build frames like that so they could put the crank case there instead of the bottom bracket.

Foose is a legit hack whose work is celebrated by those who aren’t actually aware of it, but think the ZZ Top Eliminator is the pinnacle of industrial design.

Proud that he incorporated some of my signature design elements when it comes to bicycle design but very very disappointed that he teamed up with those thiefs at Micargi.

Does it come with a playing card for sticking into the spokes?

Michargi? Too bad. would like to see him with a more respectable company.ould you imagain how much they would be from, Electra, Nirve or Felt? Now a days, everyone is owned by someone else and quality suffers along with price value. God Bless.

Very cool. Saw Chip and his son at a motorcycle bike
show at Lyons Museum gathering and he was admiring
all involved with two wheels. My board-track barnfind Henderson motorbike
was there and id like to think it was a little inspirational.
Very nice Chip, just a little too shiny for me.

Very cool, l would buy one for my bicycle collection. Sign me up!!!!

Its too bad he didnt put a Wheelster flat top stem and steering wheel on his bikes. He needs to check out my website