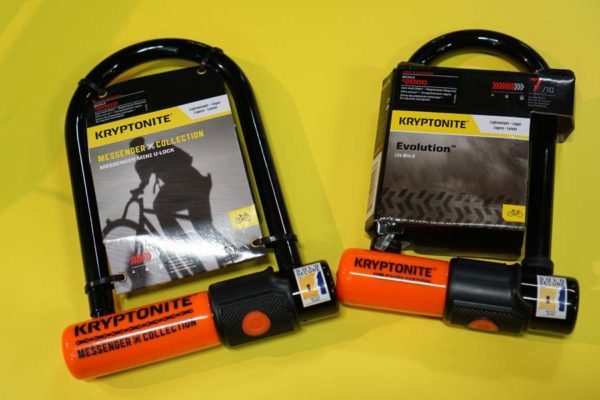 The all-new Kryptonite Kryptolok is their “new U”, which is a true double deadbolt design rather than the bent foot design they’ve used for years. And that’s not the only update – the shackle’s ends have deeper pass-through of the lock cylinder, so it’s stronger, and the cylinder is longer so there’s more space inside. Lock in all the details and other new products below… 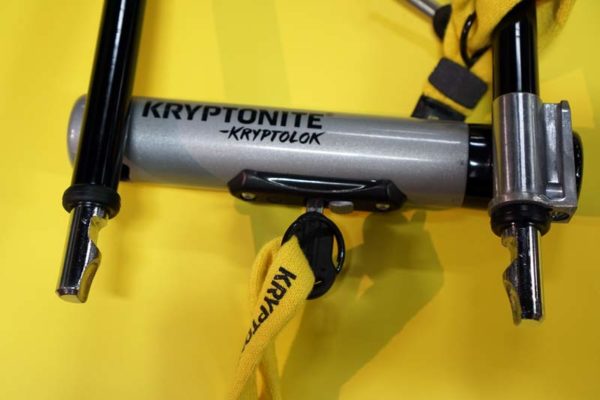 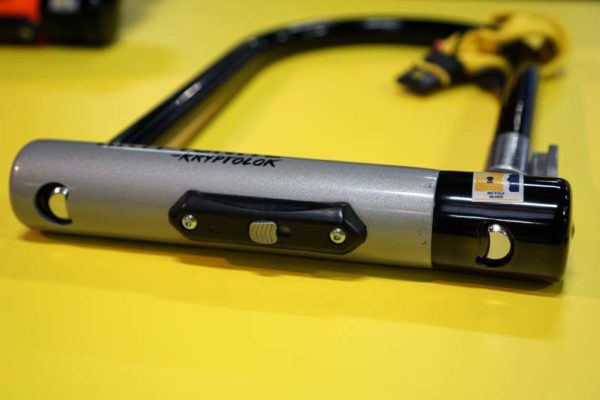 The locks have anti-rotation thanks to the scalloped shape at the ends of the shackle. This means a thief can’t just cut one side and twist the shackle to create an opening. They’d have to cut both sides of the shackle…or the lock core cylinder. With deeper shackle penetration, it’s even stronger against prying attacks, too.

The “new U” locks come out March 2017 and almost all u-locks get the upgrade. The Evolution Lite Mini 6 and Messenger Mini keep a bent foot design, but still gain the double deadbolt notch. 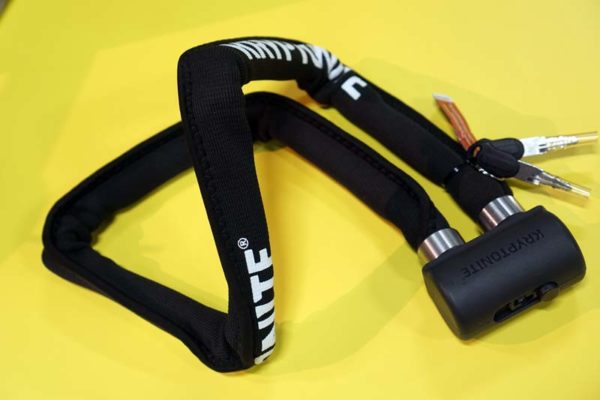 The Keeper debuted earlier this year and is their take on the folding lock. Rather than folding in a single plane, it uses double jointed connections to make it more malleable so it’s easier to fit around the bike and whatever you’re locking it to.

Kryptonite has also upped the ante on their theft protection guarantee. The optional Anti-Theft Protection Offer has increased to $3,000 for the Evolution Standard and Long Shackle and $5,000 for the New York Fahgettaboudit Mini.

If you were going to say a BIC pen, you’re wrong. These are disc tumbler locks, not tubular pin tumbler locks.

I remember when that “hack” first came out, and while every other manufacturer using the tubular tumbler turned a blind eye, Kryptonite immediately replaced everyone’s locks. They’ve had by business (and my recommendation on the sales floor) ever since.

I don’t know how this improves security. Don’t thieves just cut the shackle?

previously only 1 cut on the shackle had to be made to open the lock.

@ Mo- It requires the thief to cut each side of the shackle in order to steal the bike.

looks like competition is FINALLY making krypto get their sh*t together. only reason i still sell them is due to their brand name recognition laurels they have been resting on. about time.

They did this because there was a new trick to break off a small piece of metal keeping in the hooked end. Freeze it, break it off with a hammer and you can open the lock easily.

But as someone else said, abus and onguard have been doing this for years and at half the price.

Any news/updates? Will packaging indicate the updated version?