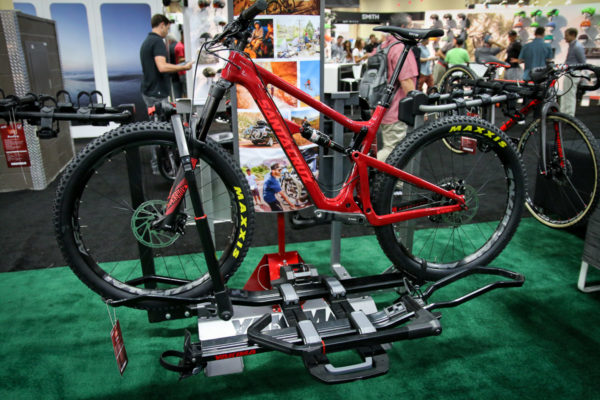 Want to take it with you? Yakima has a rack for that. In fact, they have a number of new additions to their rack and cargo family that will let you take more than ever on your next road trip. Tray style hitch racks seem to be where the majority of riders want to spend their money to carry precious bikes, but there is still plenty of room for improvement – especially when it comes to bike on bike interference. The new DrTray may just solve that with quick release adjustable trays and plenty of clearance for a number of different bikes… 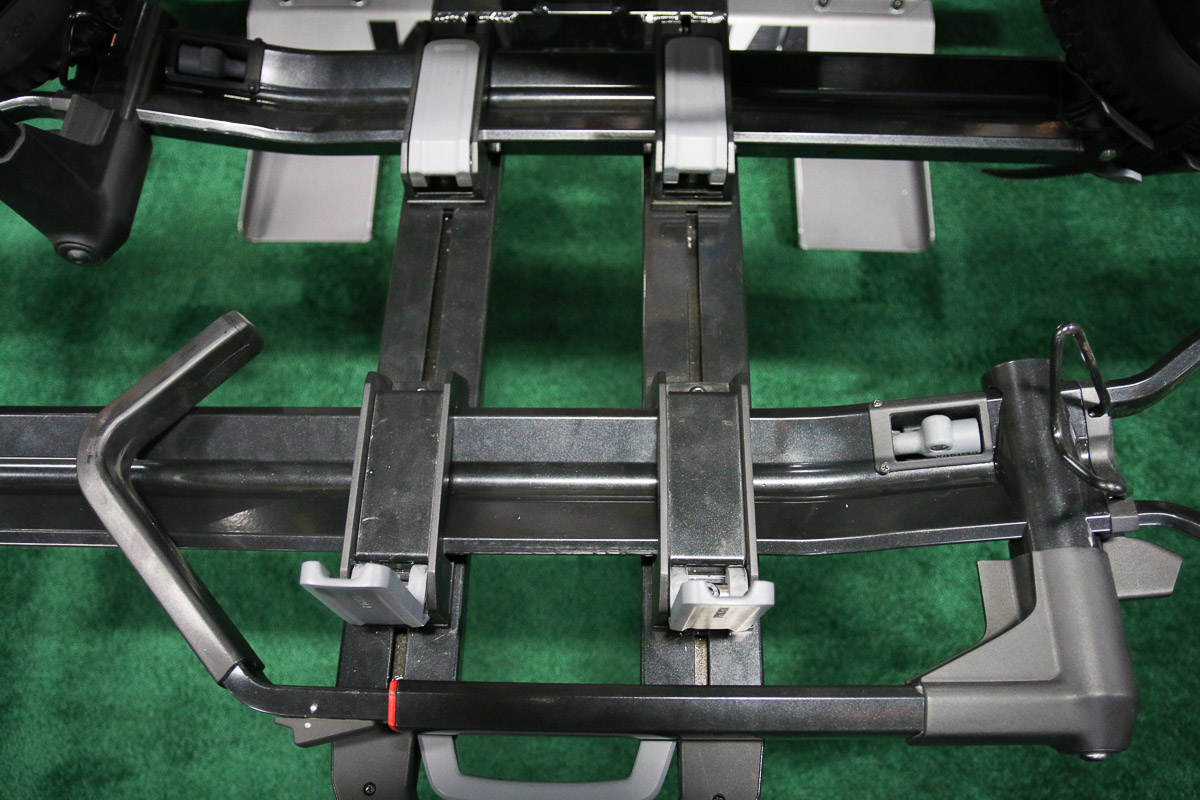 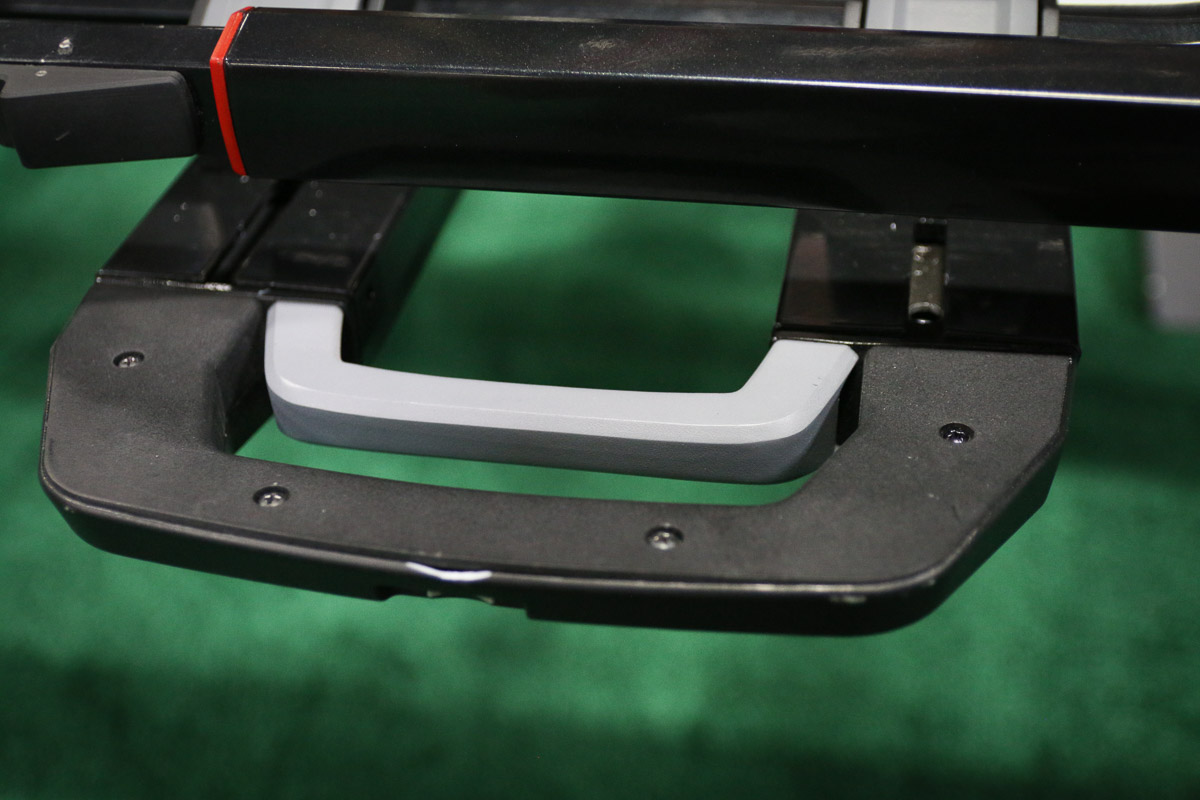 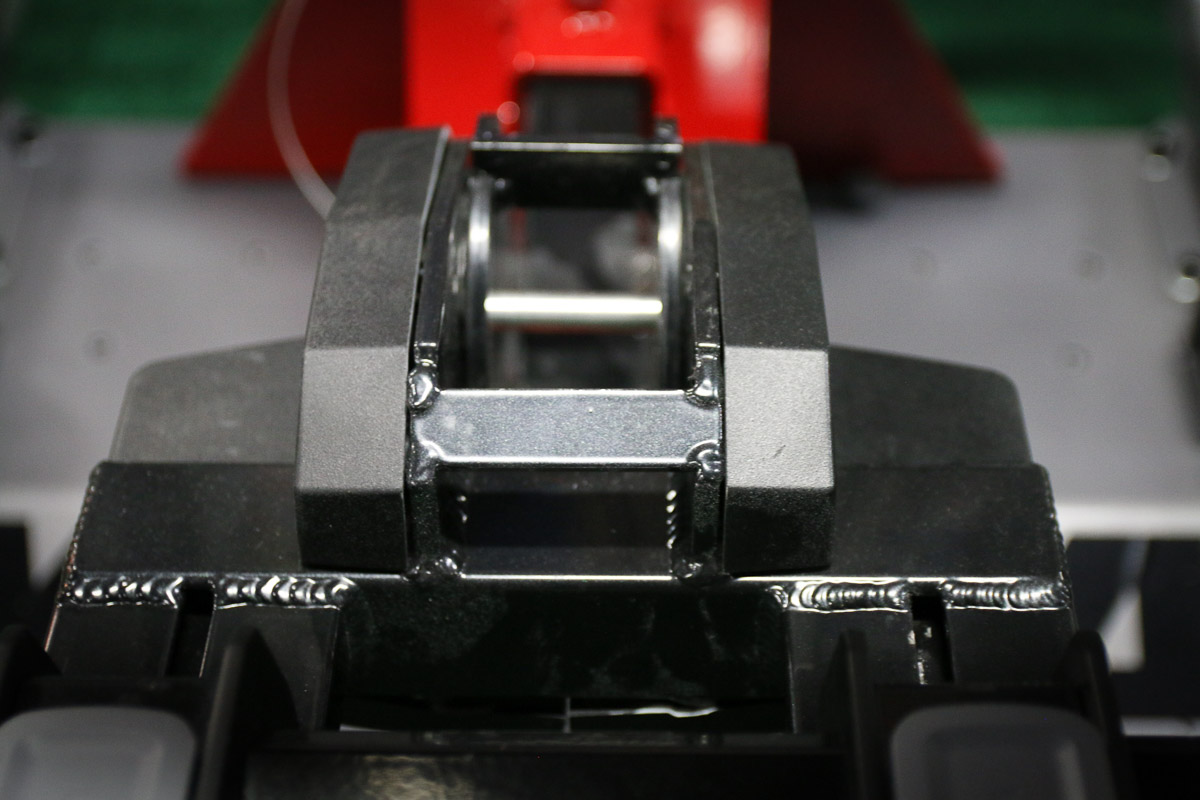 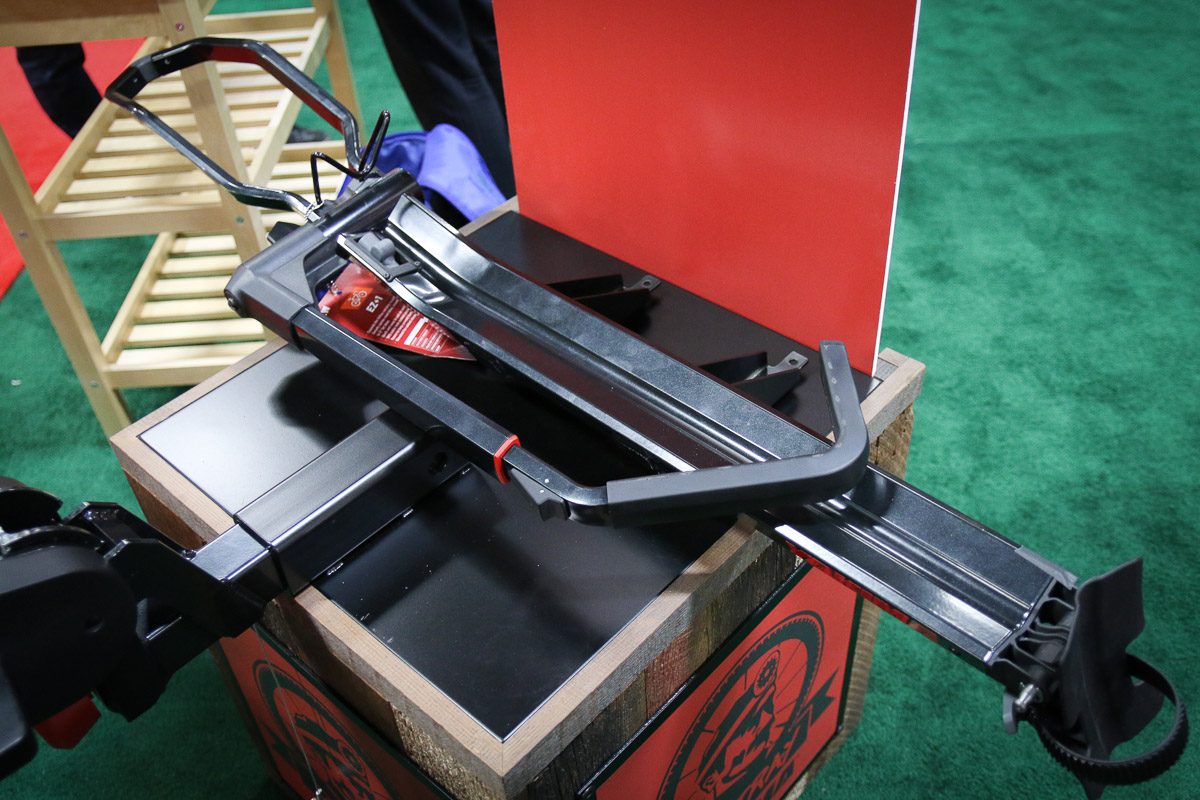 Rather than using bolt on cradles that make adjusting the tray positioning a slow and tedious process, DrTray uses quick release brackets that allow you to adjust the trays both side to side and front to back. At most you can have 18″ between two bikes for maximum clearance. There is also an EZ+1 to add the capability of carrying three bikes but it does cut down on bike spacing to 11.5″. However, the third tray is elevated from the other two trays to provide more clearance around the bars and saddles.

The remote tilt lever is located at the very end of the rack for easy access and it allows the rack to tilt up or down as well as allowing the tongue of the rack to fold over on itself for storage. Each tray has its own built in telescoping cable lock that is thicker than previous options but additional locking can be added with a lock loop built into the rack body. 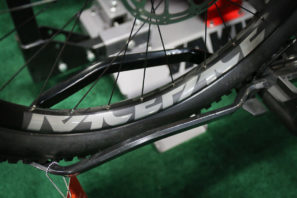 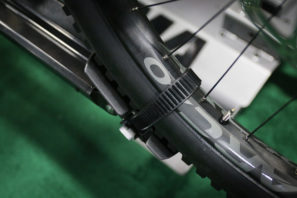 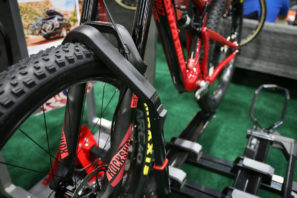 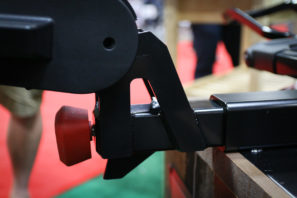 Built to fit the biggest fat bikes (finally), DrTray will clear 5″ fat bike tires while still working with standard bike tires. The rack will feature a user serviceable pivot, a hard stop for the arms to prevent them from ever touching the ground, and wide tire support arms to clear the burliest forks. Better still, it’s pretty light at 34 lbs for the two bike 2″ hitch version. The 1 1/4″ version of the rack is actually 3 lbs heavier because the tongue had to be made from steel rather than the aluminum of the 2″ version. DrTray will not replace the HoldUp, but will sit on top as their premium product for $579 and an additional $229 for the EZ+1. 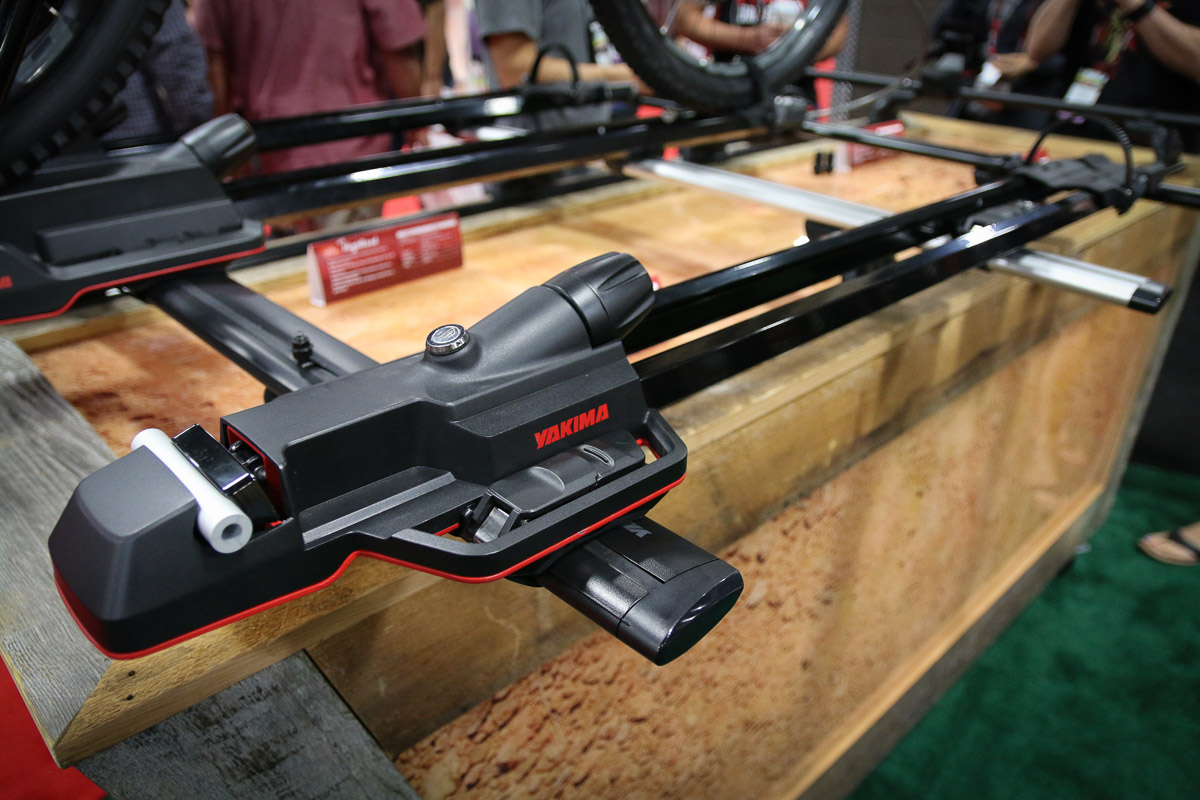 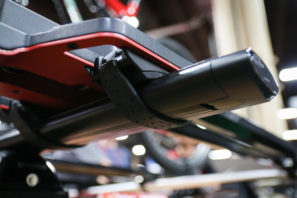 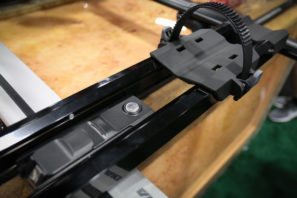 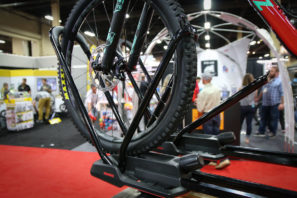 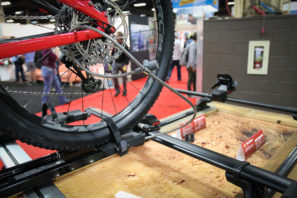 What will be replaced though is the HighRoller and Sprocket Rocket which get upgraded into the HighSpeed and High Road roof racks. The High Speed fork mount now features Torque Knob feedback that clicks when it’s tight and is thru axle compatible for 12, 15, and 20mm axles (QR skewer included). The whole rack sits farther forward on the vehicle to clear the rear hatch on most vehicles, and it’s compatible with 5″ fat bikes. There are also new steel core rubber strap attachment points to make mounting even easier on all types of cross bars. The HighSpeed will sell for $219.

The HighRoad gets updated to no longer have different wheel settings and will fit 26-29″ wheels up to 3.25″ wide. A cable lock is included out back, and the rack will sell for $229. 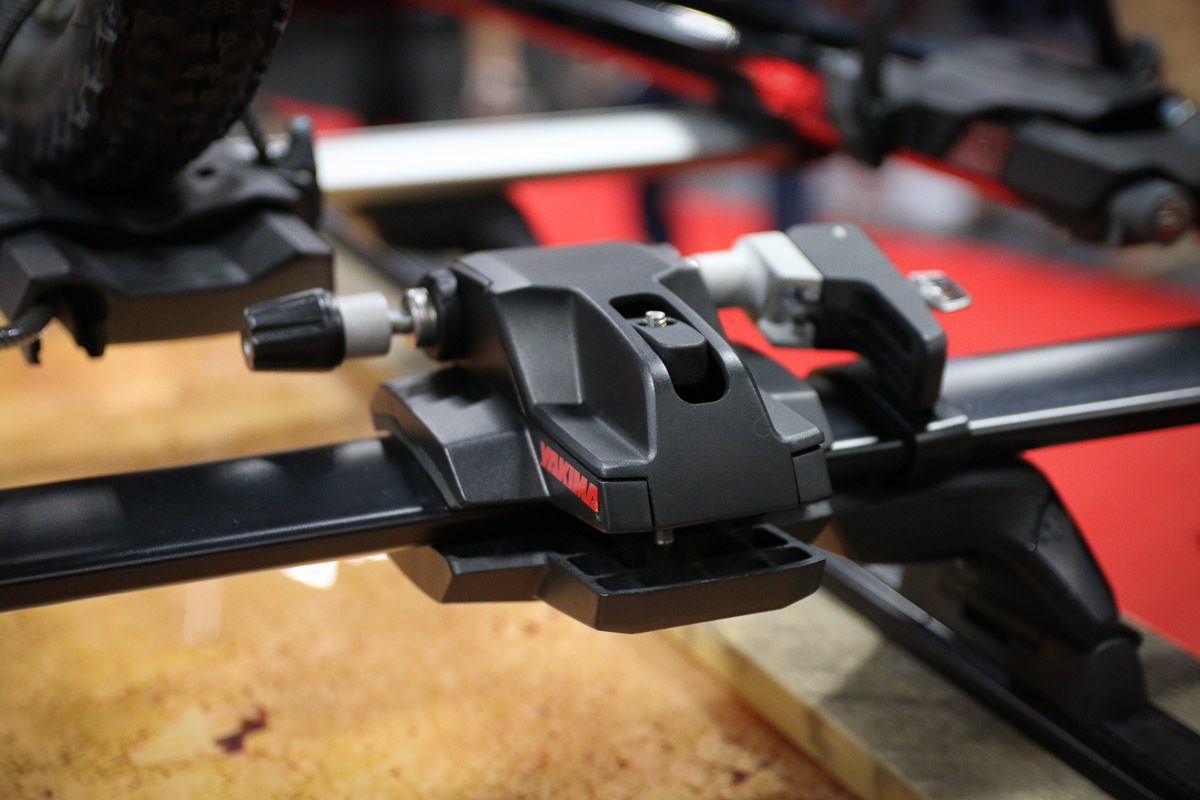 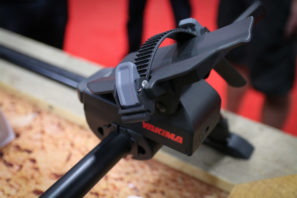 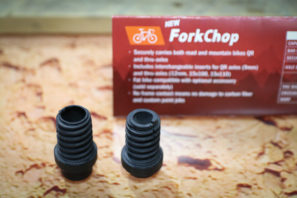 Yakima’s minimalist rack also gets an update – think universal Boa with thru axle compatibility. The new ForkChop will fit any bar and is thru axle and QR compatible with different inserts which thread into the head. Everything is included for $119. 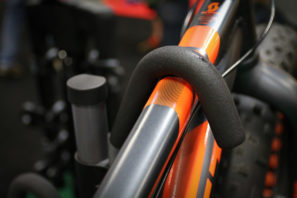 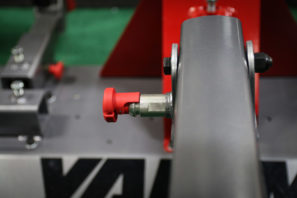 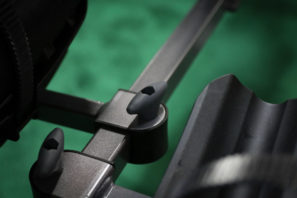 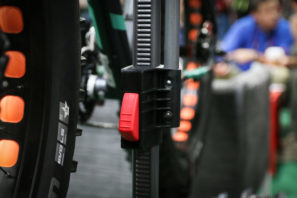 I was also very happy to see changes made to the FourTimer tray style rack. Our sample and I didn’t get along too well, but it seems like all of the issues have been addressed. Most importantly, the arms that hold the frame in place on the rack have been updated with a much more durable rubber (not foam which allowed the metal to wear through and damage the frame). The safety pin has also been updated with a spring loaded pin so it shouldn’t work its way out while driving, and the hardware for the adjustable trays has also been updated to stay put. Finally, the spring loaded mechanism for the frame supports has been made more robust so it stays in place and locks in better. 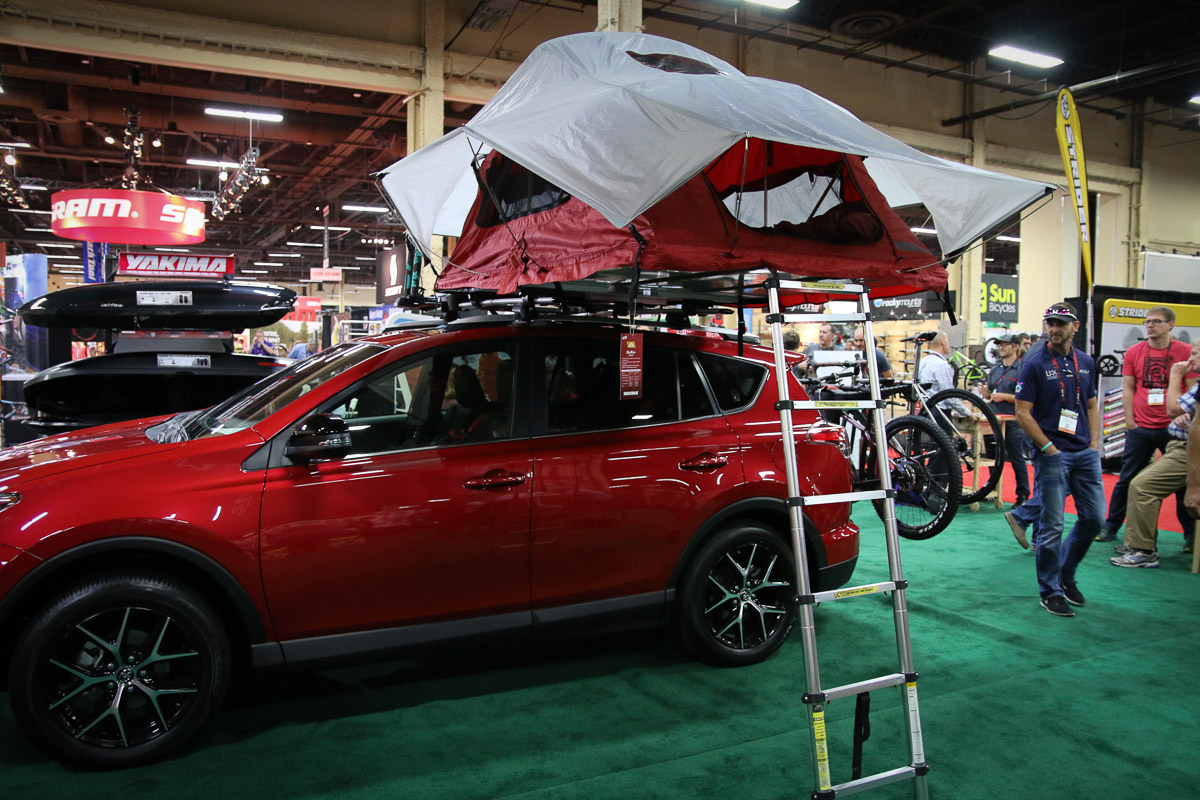 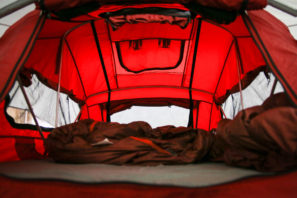 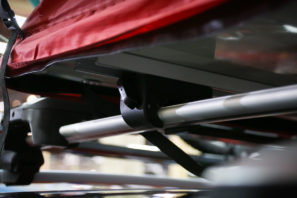 In a completely new category for Yakima, they are joining the number of companies offering roof top tents. The thought is that they are easier to put up, and keep you off the ground to stay dry and hopefully safe from most forest creatures. Yakima has taken a bit of a different approach though and has used much lighter weight fabric to bring the weight down to just 120lbs for the full unit – some 100 lbs lighter than the competition. They’ve also used easy to use clamps to lock in the tent to the roof rack instead of u-bolts which should make it much easier to get on and off which could be important if you only want the tent to go on for weekend adventures. The inside of the tent is fairly spacious and includes a foam mattress and is said to go up and down in less than 5 minutes. Available in two sizes, the Skyrise will sell for $999 for the 2 person small or $1349 for the 3 person medium tents this February. 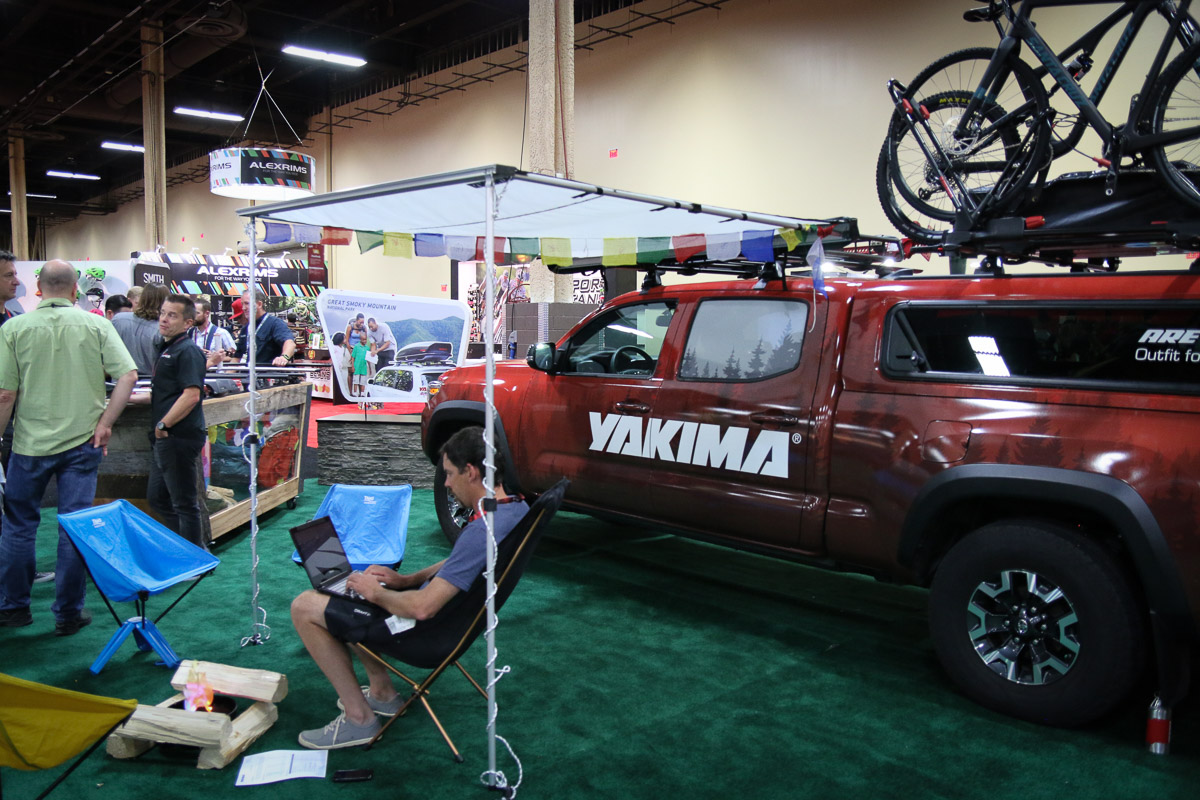 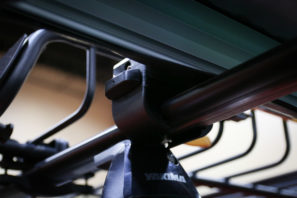 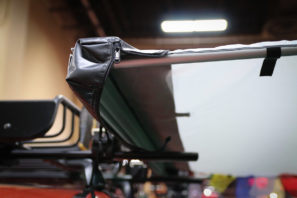 Following similar logic, the Slim Shady offers an easily retractable awning for race day or camping needs. The light weight awning uses the same clamps as the Skyrise for easy installation and removal, and will sell for $259.

Does the DrTray fit 29+? Its a lot larger outer diameter wheel than full fat and 29. Most current racks dont fit it but they would if companies would make the arms about 1″ longer.

My older Yakima Hold Up fits 29+ just fine. I’d assume that the newer rack would work even more just fine.

I wonder if they are buying the slim shady awning from ARB? looks very similar.

Damn, I like the DryTray (except for the name). But I Just bought a Holdup 2….from the most shadiest guy on craigslist ever…