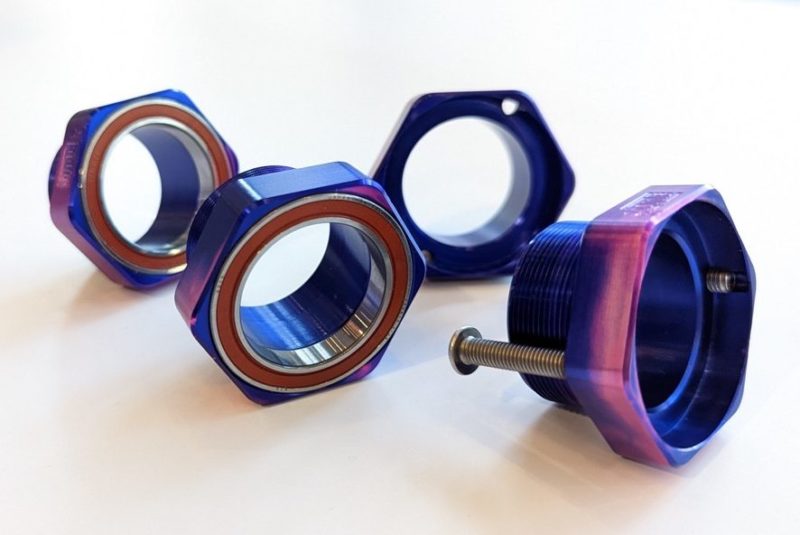 While at the Philly Bike Expo, Ignite Components had an early sample (not quite a prototype) of their new Bottom Bracket. We’ve covered Ignite’s wild cranks in the past, and this new bottom bracket design seems to be the same caliber of quality. But this isn’t just a bottom bracket. It’s a bottom bracket with a bearing extractor tool built right in. 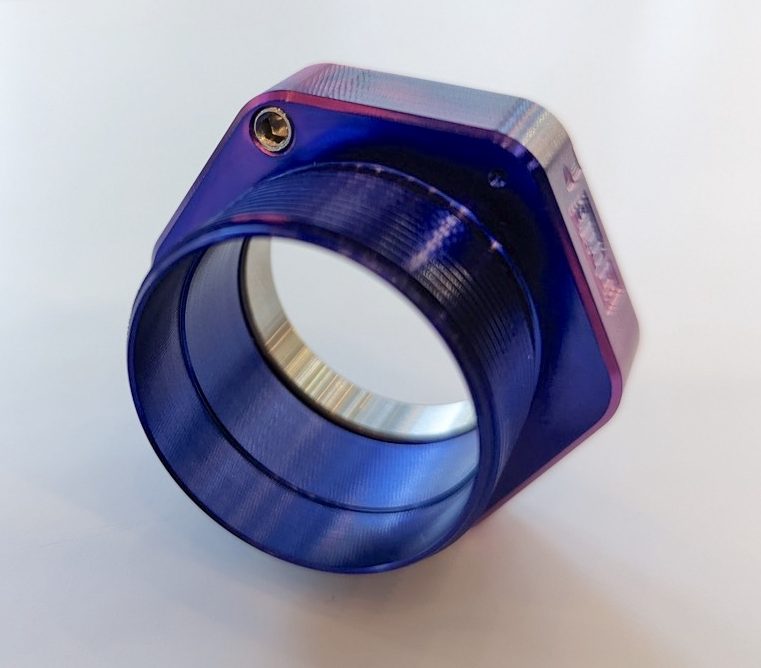 Screws that are in place while the bottom bracket is installed and being used. 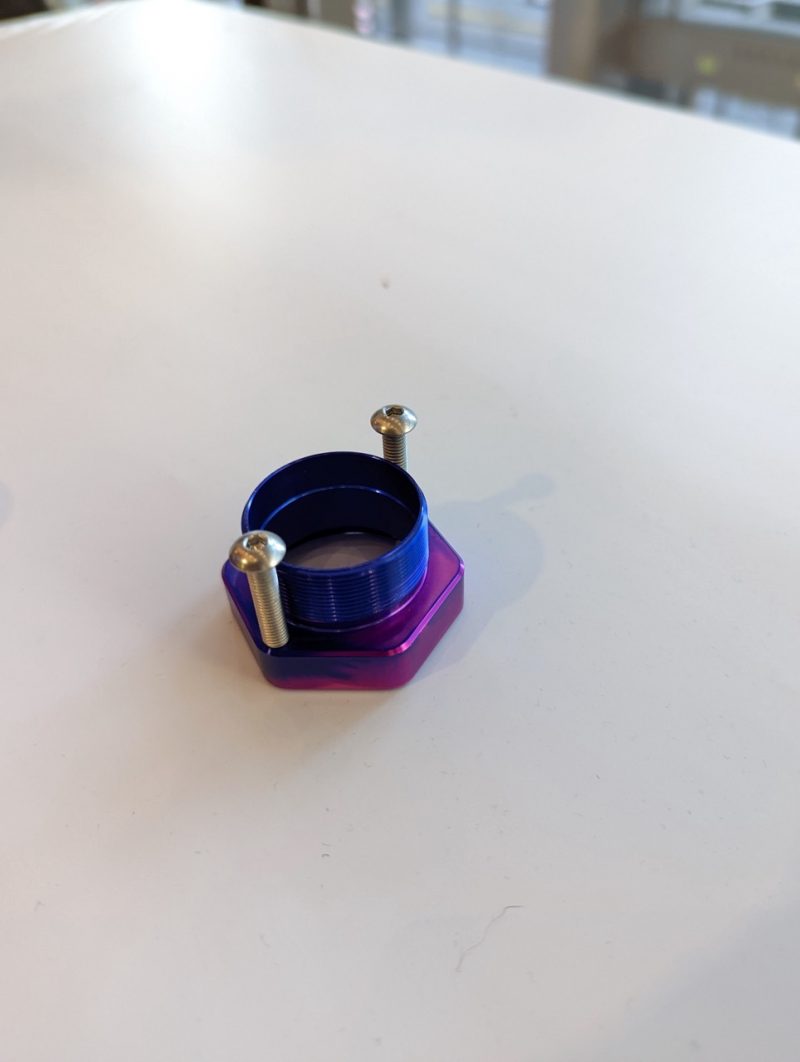 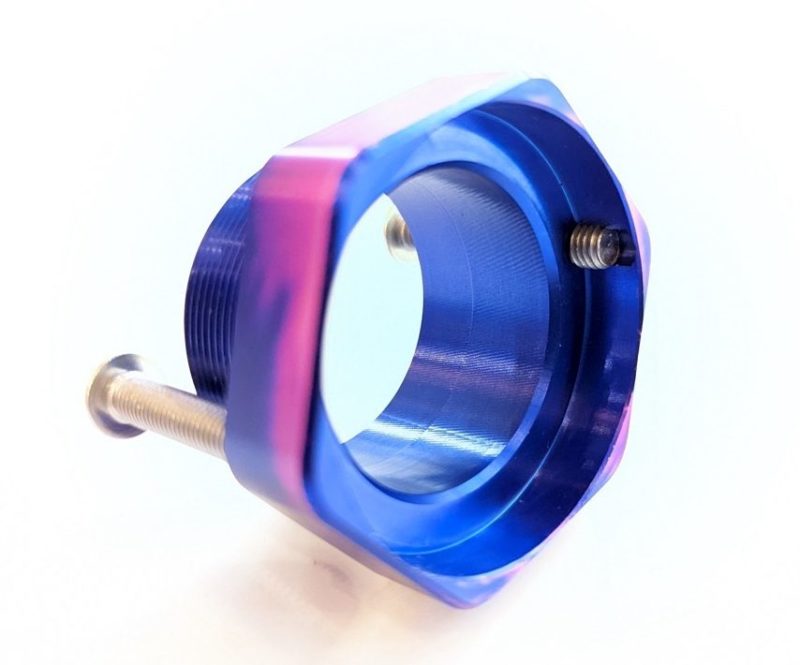 After the small set-style screws are removed, you inset the longer m4 screws to start turning them and pushing the bearing out. I didn’t sample it, as these were not quite production-level samples, but it looks easy enough.

While they probably aren’t used as much as they should be, Enduro Bearings offers tools to remove and install bottom bracket bearings rather than throwing away the whole thing and starting over when the bearing wears out. This accomplishes the same thing, but in one complete package. 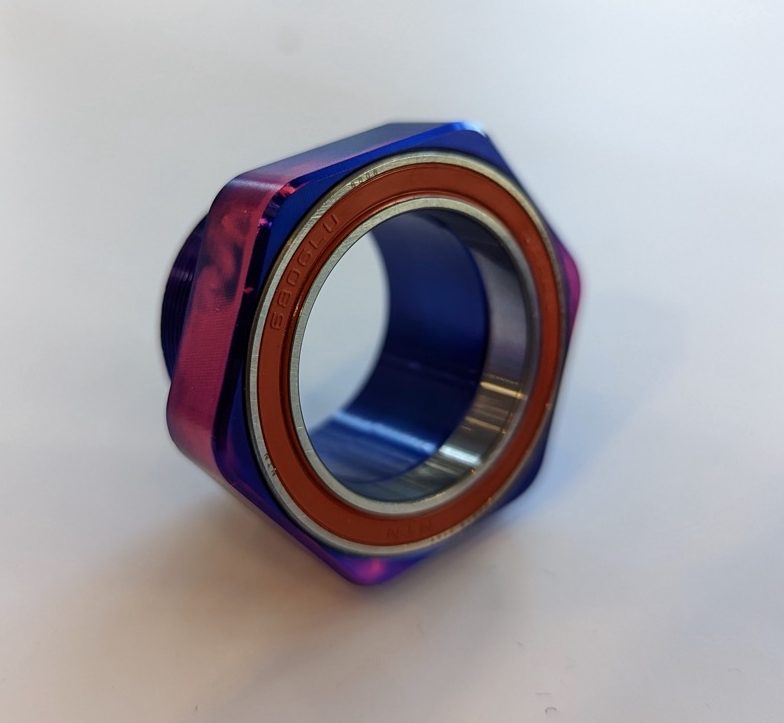 The bearing will be 30mm, as well as 24mm option for Shimano spindles

Another feature of the Ignite Bottom Bracket is the outer hex shape of the cup. No special installation tool is needed. If you wanted to, you could use a big adjustable wrench or, an old threaded 44mm headset wrench. But, Ignite says if you don’t have either of those wrenches, the bottom bracket kit will come with a proprietary tool that will allow you to install the bearings into the cups using a good ol’ hammer that won’t damage the cups or the bearings. And, this same tool can also be used to install the loaded cups into the frame’s bottom bracket shell by encompassing the whole bottom bracket (including the hex), allowing you to use a 3/8″ socket wrench to thread it into the BB shell and torque it down.

They didn’t give me an expected time of availability or retail price as of this post. But stay tuned as I’m sure we’ll know when it comes about.

Check out their kick-ass crank offerings at the link below.

Clever! Might be a weight penalty but that’s a small price to pay to make something easily user serviceable.

This is really useful. A rare case, when the bike industry offers something truly worthy.

Nice! not only does it use bolts to remove the bearings, it has a hexagon body so that you don’t need a special tool to install or remove..smart.

But you do need a special tool. 44 mm is not a standard wrench size, and an adjustable wrench with that big of max opening is big and heavy (over 2 pounds maybe). Not to mention all the other design flaws of the product.

You typically ride with a bottom bracket tool? What does it matter how heavy the tool is? Do you only use light weight headset presses? What are the other so called design flaws?

It takes less than 1 min to extract the bearings in any of the bottom brackets I own, and without having to remove the bottom bracket. Then it takes about 1 minute to install new bearings. So just buy the correct extractor for whatever BB you own and a press kit. I could however see this BB as a great option for a true touring bike, where you might not want to carry any special tools. Would also be interesting to see if it ruins the bearing when pressing them out.

If you look at the photo without the bearing you can see the screw is placed so that it will hit the bearing right at the rim, not on the seal. That would be stupid.
Except for weight weenies this looks like it has only advantages.

See my longer comment about the design flaws of this product.

It will. The pressure will be on the sealing and the inner ring.

As long as the screws don’t gouge the seal it should be ok because they press on the outer race of the bearing. Having said that you only really want to be removing your bearings when they’re knackered anyway, they should be installed with copper slip so shouldn’t need periodic removal.

Wrong, copper slip is an anti seeze that doesn’t keep water from penetrating the bb threads. It’s messy and impractical.

This should be the industry standard. No more hunting around for the proper cup removal tool and bearing extractor.

No one is going to have a 44 mm wrench… well unless they are employed at a shipyard.

Love the hex shape, current BB tool variants are getting out of control.

44 mm is not a standard spanner size, and an adjustable wrench with that big of max opening is big and heavy.

Good idea, but steel screws in just a couple aluminum threads is not ideal in the best circumstances and trying to push out a bearing that’s been in there for 2 seasons sounds like a tall order.

This is a design fail.

4.What good is extracting the bearing without being able to install a new one? To install a new bearing, you are going to need a bearing press anyway.

Did you read the article, or just go straight to the comments to throw shade?

1.) Who cares how much their bottom bracket wrench weighs? Do you pack one on your bike?

3.) We don’t know how much this weighs, it will probably weigh a bit more than some weight-weenie BB but not much.

I applaud the effort to reduce waste by encouraging users to just replacing the bearing with this unique remover feature, BUT for the most part I agree with velo kitty that this is a poor design, compromised just for this one silly feature.

An adjustable wrench that opens to 44mm will be a minimum of 16″ which is not what most people have (12″is standard for 99% of people and dinner of those don’t even open to 36mm). My 18″ opens this far but I also work on cars for fun.

Adding thickness moving the bearings outboard to accommodate the threaded hole puts extra load on the cup at it’s highest stressed point. Also an area that is difficult to add material due to mating part limitations.

Also by moving the bearings outward they have to figure out how to maintain overall width to fit the cranks. So either there are no dust covers or secondary seals so the bearing seal is the only seal, or they have to use narrower bearings.

Hammering in bearings even with an included tool is a recipe for having to replace bearings more often because they are not aligned. You might think they are fully seated and aligned but likely are not. You will go through bearings so I guess it’s lucky they have those built in bearing extractors.

Right to Repair is so hot right now.