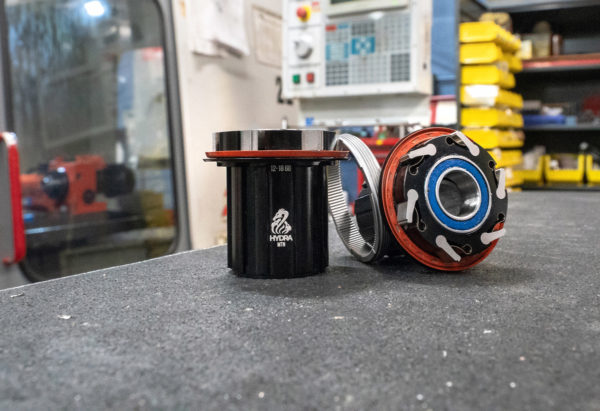 When you hear ‘Industry Nine,’ a few things immediately spring to mind. Bright colors. U.S. manufacturing. And loud hubs that offer an impressively high level of engagement. So imagine my surprise when I9’s Vice President, Jacob McGahey, told me that they had a new freehub design for mountain bikes that they would soon be launching with even better engagement. Nearly six times better! 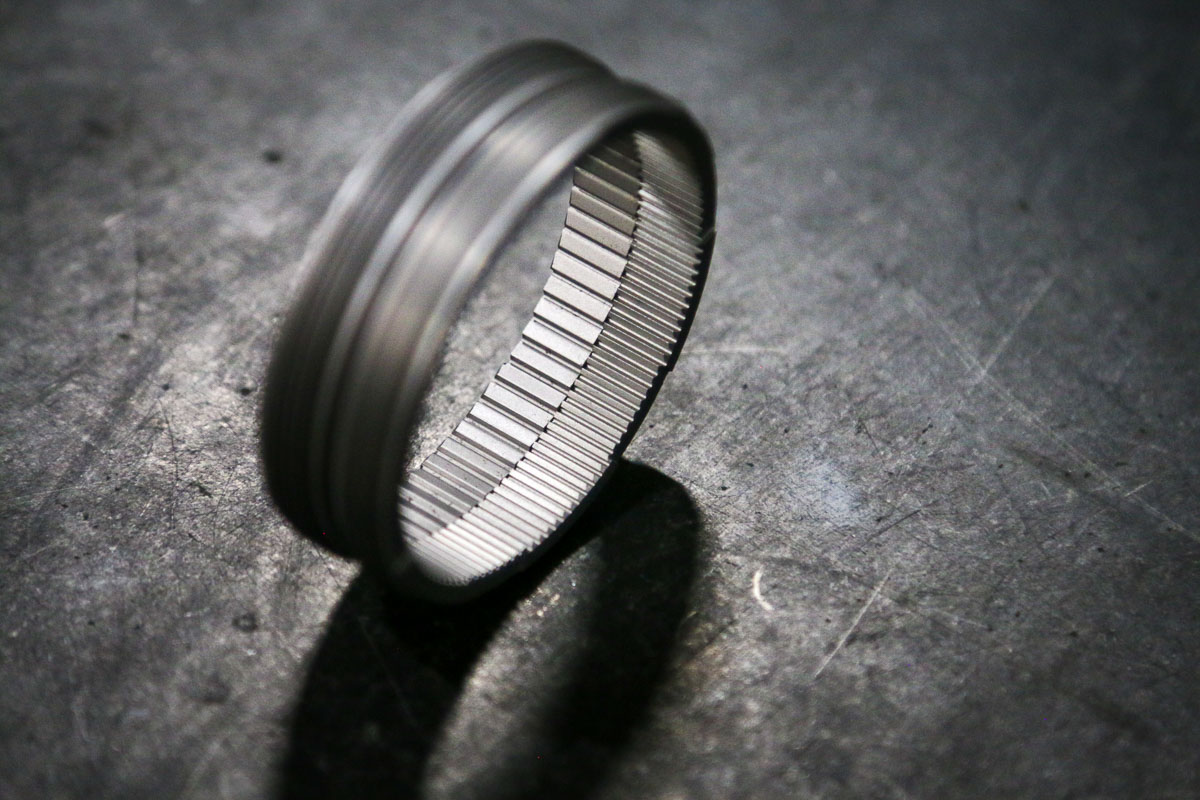 How is that even possible? That was exactly my thought as Jacob started to explain their new drive mechanism, that would eventually be named Hydra. While the drivering has indeed gained more teeth, there’s a lot more to the story than just adding more notches for the pawls to settle into. 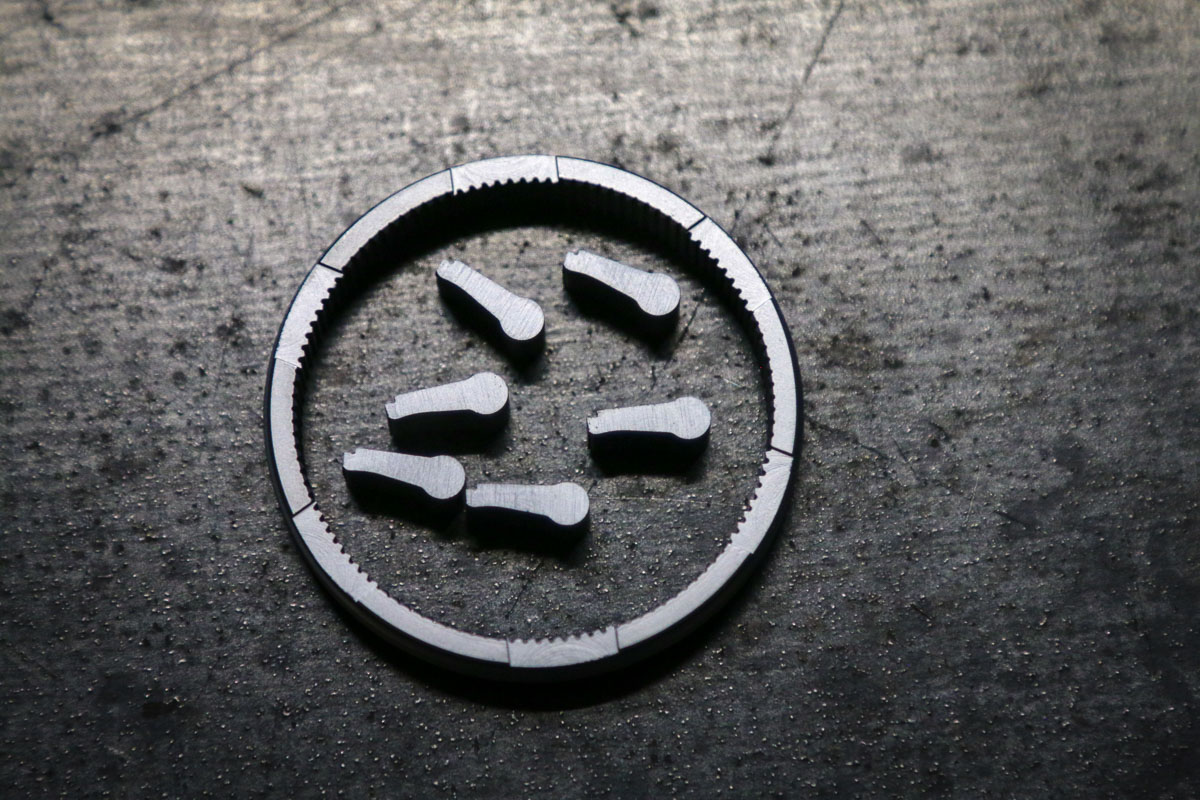 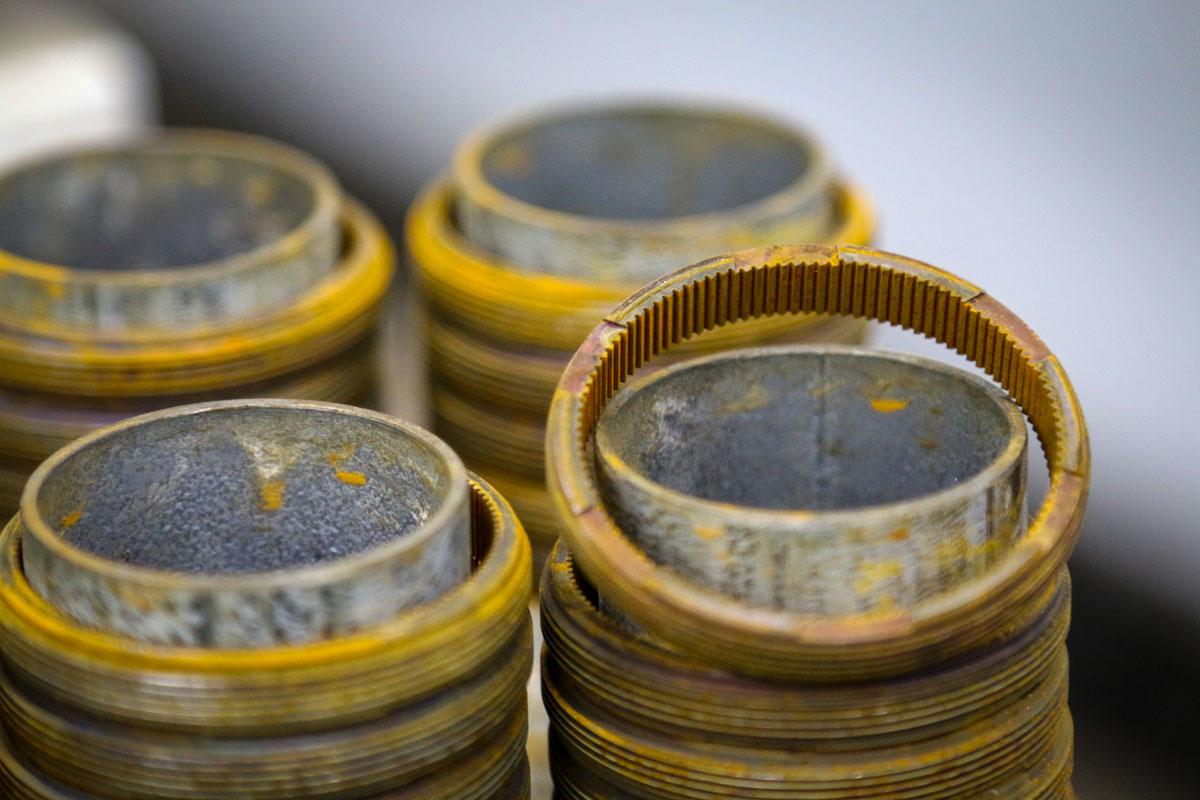 To understand Hydra, first we have to start with the current Torch freehub design of which some design aspects go all the way back to their Legacy Series hubs in 2005. Thanks to the number of wire EDM (Electrical Discharge Machining that uses an electrically charged wire for very high precision cuts in hard metals) stations at I9’s Asheville, NC HQ/production facility, the company was able to create an insanely strong freehub mechanism years ago. This was at a time when 120 points of engagement was basically unheard of out of a pawl-driven hub. This was created with an EDM steel drive ring with 60 teeth, and six EDM pawls that were set up in a two phase arrangement – three pawls would engage with the drive ring at once, followed by the next three, resulting in 120 points of engagement with 3° between engagements. The Torch design is still better than what you’ll find in almost every stock hub, but no longer the pawl-driven engagement champion, it was time for I9 to look toward the future. 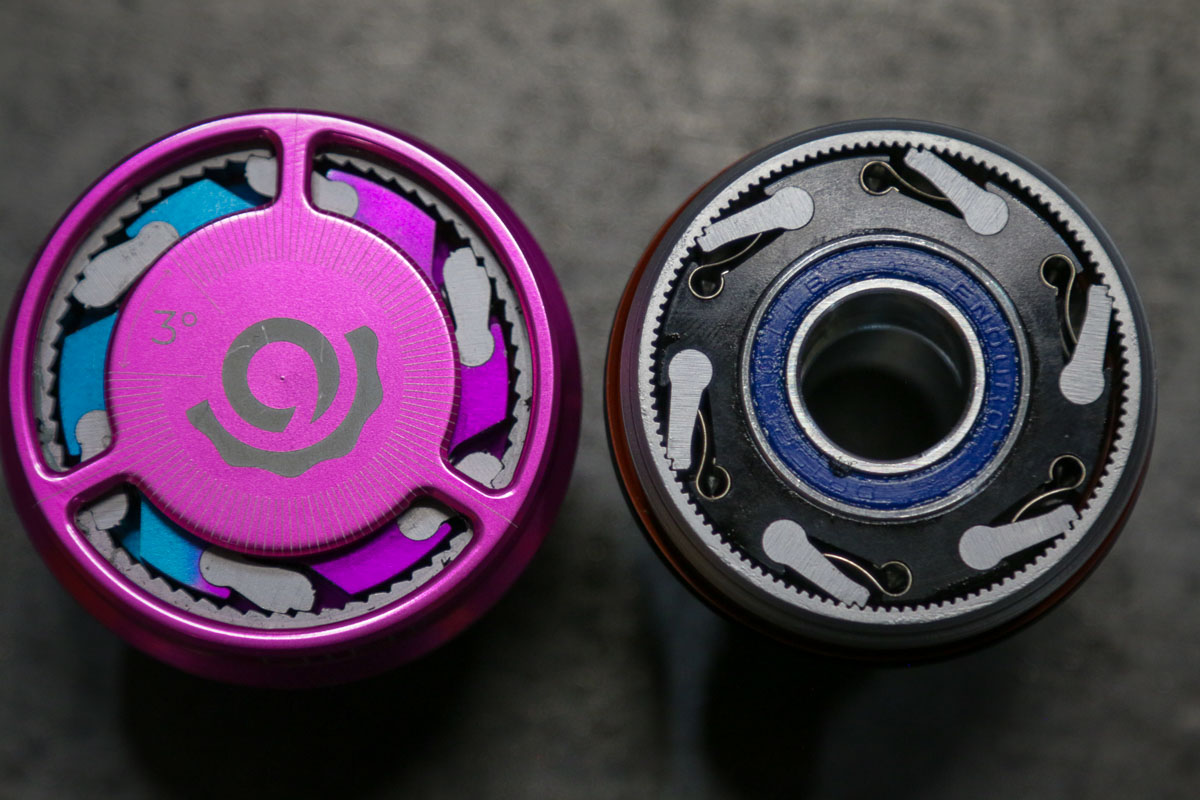 Torch on the left, Hydra on the right.

Even with I9’s advanced manufacturing and engineering chops, Hydra still took more than two and a half years of testing and development to get it right. One of the biggest changes to the Hydra drive mechanism is the concept of a continually phased system. That means that the pawls engage one by one. That, combined with the new 115 tooth drive ring results in an absurd 690 points of engagement and just 0.52° between engagements. Put another way, for every 1.2mm of the drivering, I9 states that there are six individual pawl engagements.

But more than faster engagement, I9 claims the design has a few of other benefits as well. In order for the continually phased system to work, it actually relies on the natural flex of the hub and axle system to force the second through fourth pawls into the drivering. Basically, with most standard pawl configurations, having a single pawl engage due to the natural flex of the system is a problem, and something hub manufacturers try very hard to avoid. With Hydra, Industry Nine has embraced that natural flex to give the Hydra system a boost. After the first pawl engages, the 2nd and 3rd are already starting to engage. Because of this, there are always at least three pawls engaged to take the load, which limits extra loading from going into the system and those dreaded single pawl loads which contribute to premature wear. 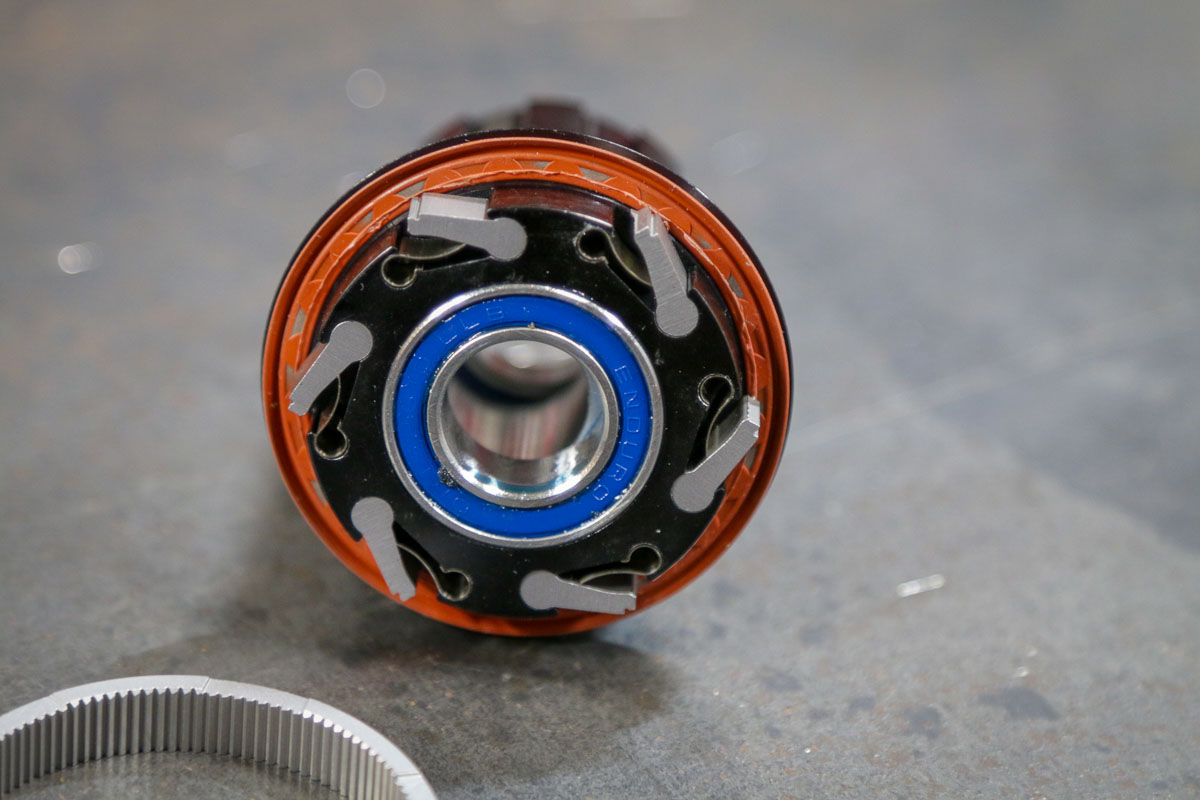 In combination with the new pawl design, the freehubs also move to a captured leaf spring which use lower spring tension. Since the freehub design isn’t trying to ‘force’ three pawls at once into a hub shell that is flexing from trail input, I9 says that they were able to use lighter springs for the pawls. This not only reduces the amount of drag in the system, but it also make for a quieter hub. 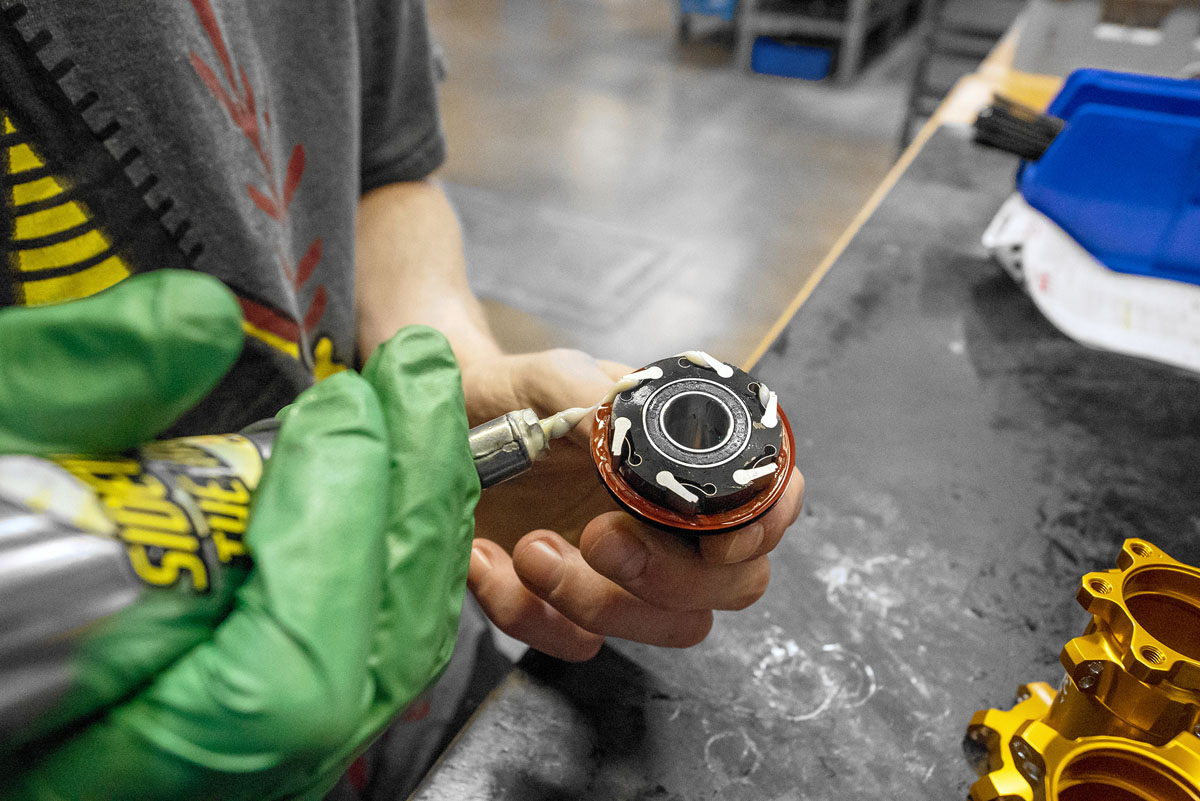 I9 hubs are known for their distinct sound – for better or for worse. The Hydra hubs still have a distinctly I9 sound, but it is a good bit quieter than Torch. Want it even quieter? Industry Nine says that to make the hubs run as quietly as possible, you can pack the pawls and drive ring with Dumonde Tech Pro X Freehub grease. This makes a noticeable difference in the noise level and while it doesn’t last indefinitely, it’s easy enough to pull the freehub off and pack in some fresh grease.

Love that precision machined noise? For louder hubs, I9 recommends using Dumonde Tech Pro X Freehub oil. The nice thing here is that since the grease and the oil use the same base formula, you don’t have to worry about cross compatibility issues if you decide to change it up. 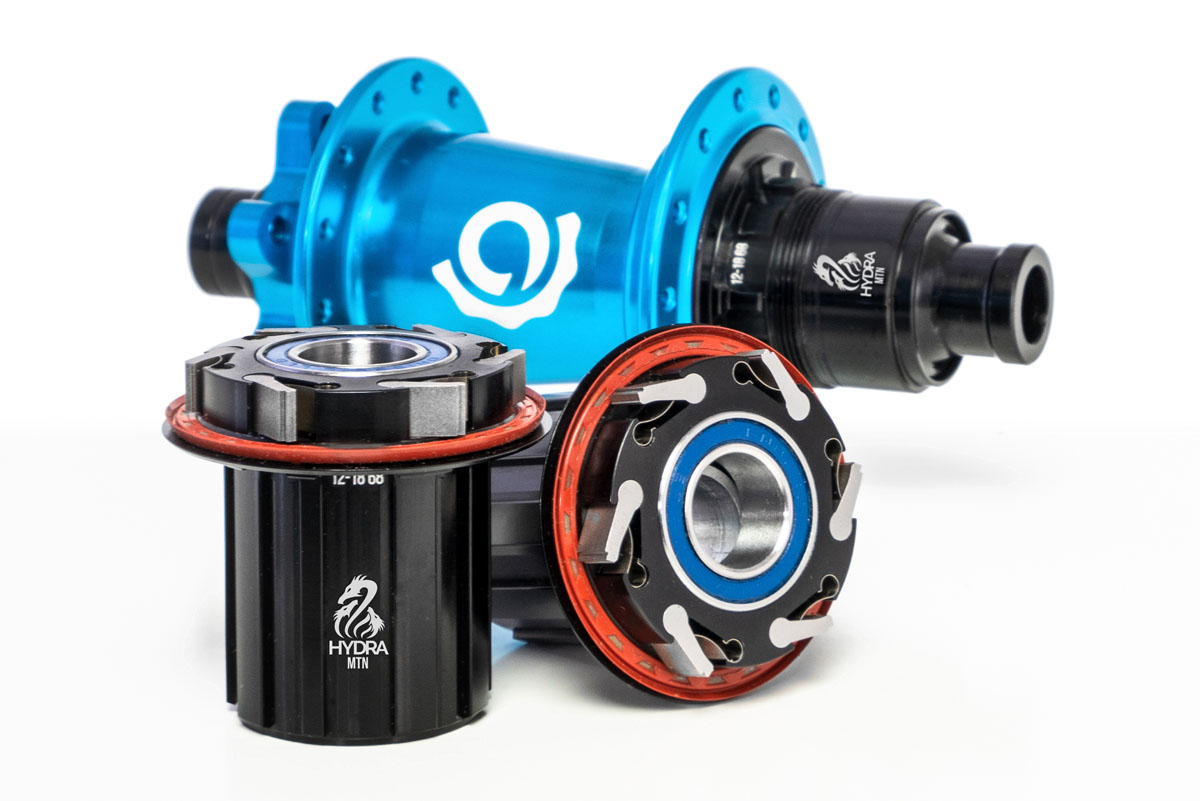 Now at this point, you’re probably thinking “I already have a set of Industry Nine Torch hubs, can I upgrade to Hydra?” The good news is that you have an I9 hub and that thing will probably outlast the bike it’s on. The bad news is that there is currently no option to upgrade the hub internals to run Hydra. If you have an I9 system wheel build with the alloy spokes though, I9 can rebuild the wheel to a new Hydra rear hub if you want to make the switch. If you have a wheelset with J-Bend spokes, I9 will be selling Classic J-Bend Hydra equipped hubs, and you can rebuild the wheel yourself (likely at your local bike shop or favorite wheel builder). 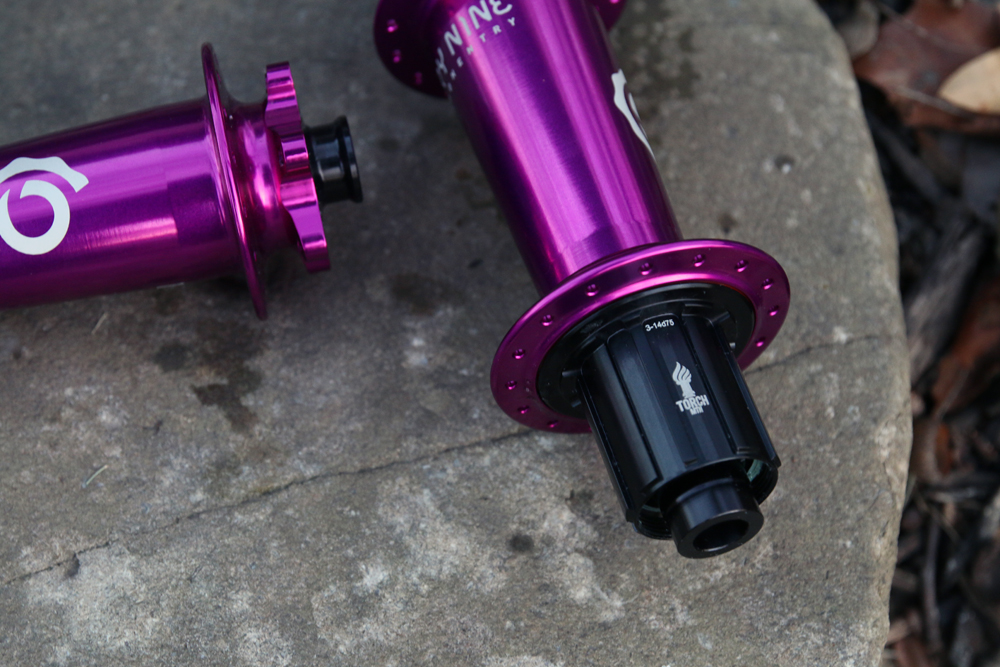 As for the existing Torch mountain hubs (including the 3 pawl Torch FH from their S Series wheels) – Industry Nine says that they will be phasing them out in favor of the Hydra hubs and the new 101 hubset. However, the Torch Road hubs for road, cross, and gravel use will remain in the line up, and continue unchanged. Importantly, they will continue to offer all Torch service parts including 6 pawl freehub bodies to keep the existing hubs out there running indefinitely. If you’re wondering about weight, Hydra hubs are claimed to be within 1g of their Torch counterparts. 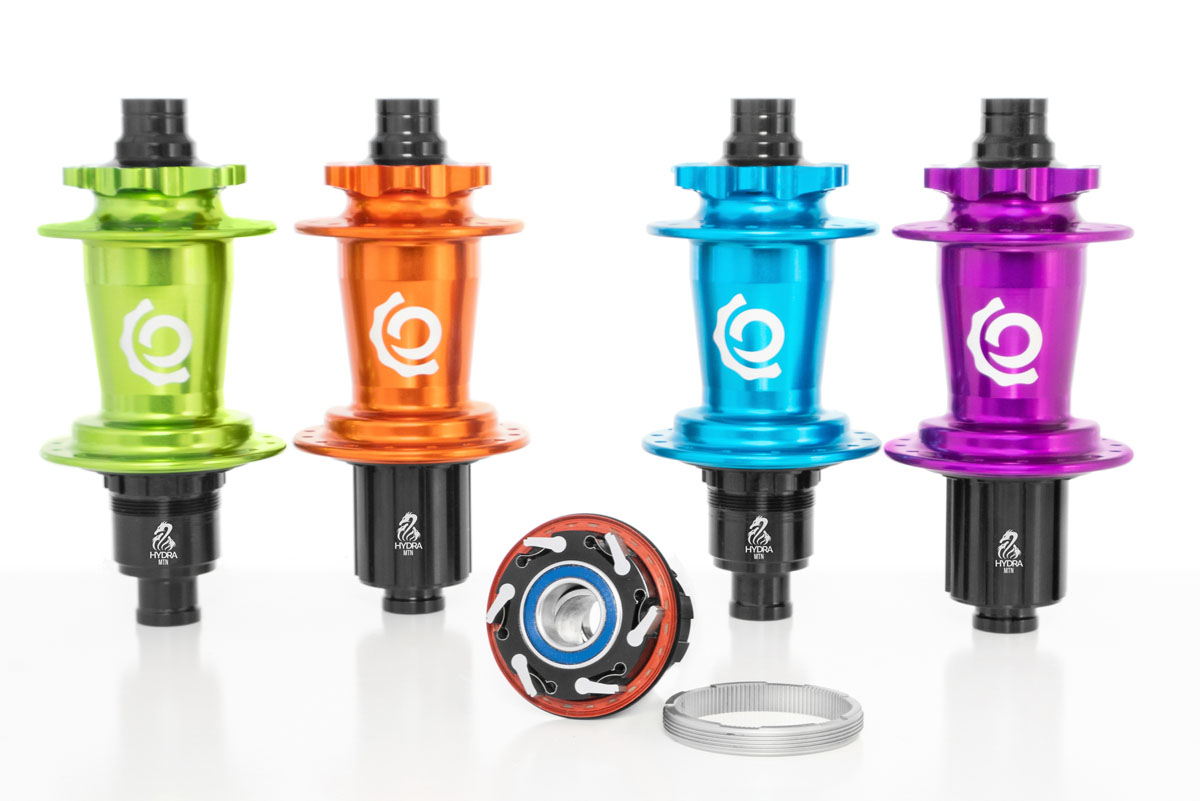 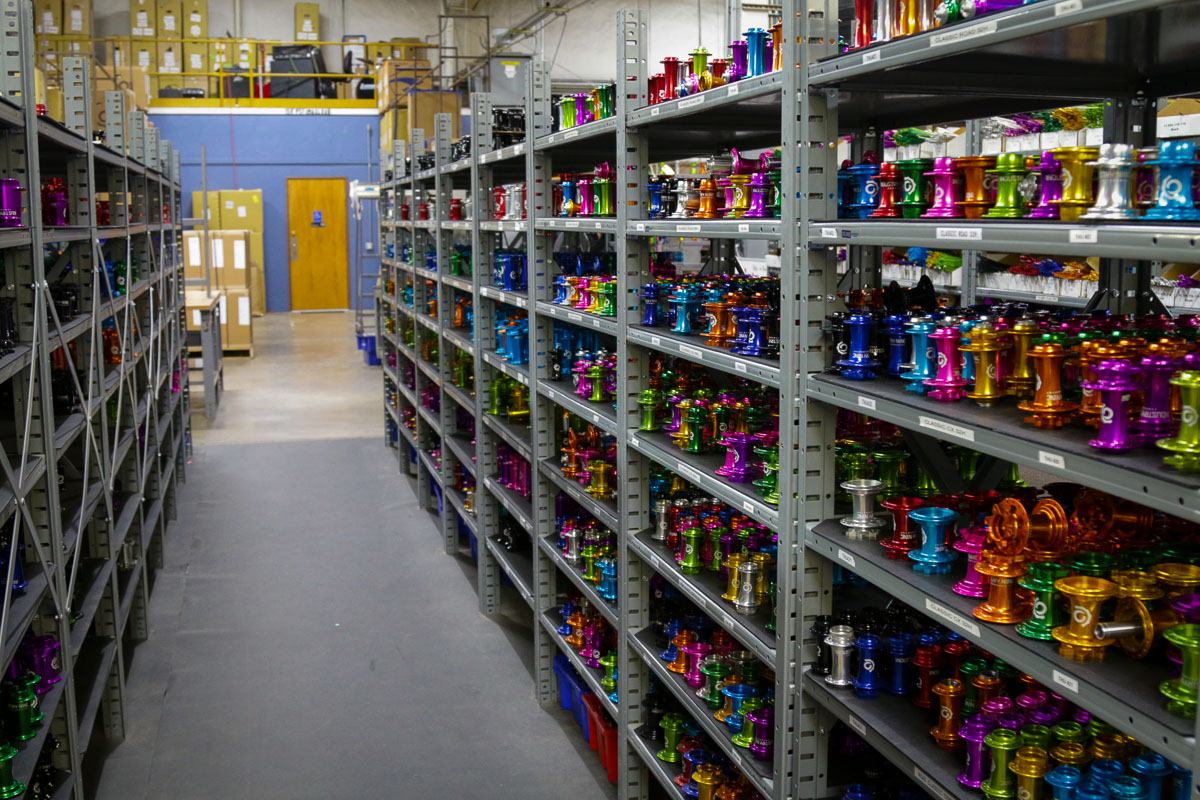 When it comes to manufacturing Hydra, it now takes a full 24 hours to machine 60 driverings compared to 18 hours to make the same amount of Torch driverings. That combined with a few other manufacturing cost increases is where you’ll find the $75 price increase in hubsets, which now start at $650. Of course, the hubs are offered in 11 beautiful anodized colors, and with Shimano Micro Spline, HG, and SRAM XD freehub bodies. Sold in both System aluminum spoke and Classic J-bend hubs (28 and 32h), complete wheel builds with Hydra hubs will start at $975, and everything is available now.

Make sure to check out our review of the Enduro310 Carbon Hydra wheel set here!

If by mythical they mean still not as quick engaging as others out there then sure, i guess you could call it mythical.

Also how they get POE for all hubs it ridiculous. they might as well say 1380 POE since each pawl has 2 teeth. Typical of spec sheet competitors like i9. no real world benefit from this change for 99.99999% of riders but hey, “pretty colors”

The engagement speed on these has me legitimately considering them. My go to rear hub is Onyx Racing, and they’ve been mostly perfect, but they’re not light compared to hubs in the same price range. On the other hand, the wear rate for a sprag clutch is much more gradual, and the hubs all around are a lot lower drag compared to the I9s I’ve dealt with. I’m not sure I could go back to loud hubs.

K-Pop is dangerous to your health
Reply to  Shafty

The difference in hub weight between Onyx and others is pretty much irrelevant. Wheel weight becomes more critical as you get to the outer periphery. Spoke, rim and tire weight matters the most. But it sounds like you just made a case to stick with Onyx anyway considering sprag durability, nothing is faster engaging than a one-way sprag clutch, less drag, no noise. That was easy.

Roller Clutch
Reply to  K-Pop is dangerous to your health

Hey K-Pop, actually, roller clutches are faster, with a detectable on/off feel. No soft engagement while sprays stand up and cam the axle.

Well, saying 1380 would simply be inaccurate. The POE is calculated based on how many individual opportunities the drive system has to engage and apply full load to the ground from coasting per rotation of the wheel, and there are 690 individual points where it can do so in the Hydra system, resulting in a .52 degree “gap” between engagement points where it can grab. Short of a sprag clutch which has it’s own downfalls, I’m not sure what else can compete… Bet it feels wicked on the trails.

I’d have to disagree Bob.

They apear to get their POE the correct way if you can derive some basic math. You have 6 phases x 115 teeth = 690 POE. The number of teeth on the pawl is irrelevant.

Had a great conversation on here with someone else the other month about sprag clutches.

Sprag clutches have a spring in them to keep them preloaded which offers true instant engagement. However, there is inherently an amount of flex involved in the inner & outer race which will cause some “delay” in power transmission.
Check out the following link for more information on sprag clutches you’ll ever need. https://www.renold.com/upload/renoldswitzerland/Sprag_Clutch_M.pdf

All that said, using flex to allow the next pawl to also engage worries me a bit. Will probably be extremely hard on freehub body bearings.

have you ridden these things or what? they absolutely make an enormous difference…your stats are way off….I’m way not part of a .0000001 percentile

Is this comparable with spragclutch hubs?
And how durable those small teeth are?
Sound is awesome….good job
Mostly i like in freehub is double row bearing – (two bearings 6803 in one?)

I would love to see someone take sound and freewheeling drag measurements for these, DTs (different ratchets) , Kings , Project 321, and Onyx to see where each falls on the spectrum. Maybe White for the roadies and Sylence if they ever materialize. You’d get lots of hits if the seo was right (hint, hint).

not good for me. only a teeth is engaged, causing asymmetrical power. it is much better the dt swiss solution where all the 76 teeths are simultaneusly engaged

I would guess they started looking into this when they realized the torch hubs already do this to some degree. You can slowly turn the free hub and hear the pawls engage at slightly different times. If this happens on the trail, there is probably enough flex to force the non-engaged pawls (within the same phase) into load so the hub does not skip or break. Then they thought if it’s going to do that anyway, give the ring more teeth so there is less flex travel needed to engage.

Onyx has the lowest numbers for drag and highest engagement. Duke University did a test for their electric vehicle project.

build instant engagement hubs like Onyx hubs there half the price. They do not have any sound with it.