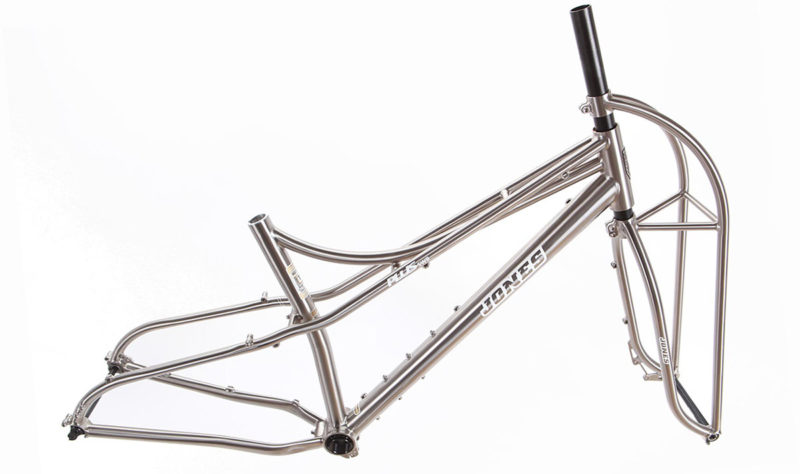 Joining the Spaceframe Plus LWB in a lightweight tig-welded titanium are the Jones Plus SWB Spaceframe and Diamond framesets with Ti Truss forks. Often described as having the spring of steel but the weight of carbon, these titanium framesets are identical in geometry, fit and parts compatibility to their steel SWB frame counterparts but they are lighter and have an enhanced spring to the ride feel. Between them, 4 new options of the Ti Diamond and Spaceframe framesets are ready. As usual, the Ti frames don’t need paint, and they look better without it. 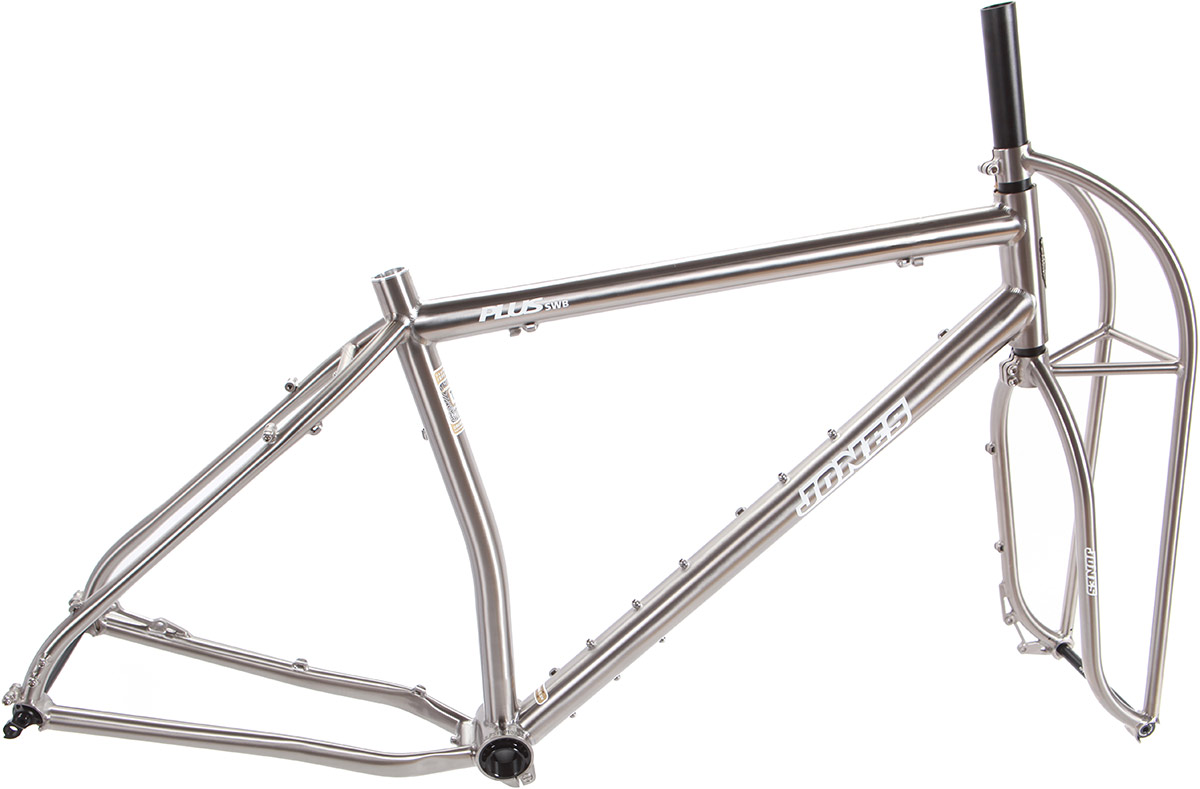 The Diamond frame is the packhorse of the Jones bicycle repertoire, decorated in an unnerving number of bosses to utilise every last bit of space for a bikepacking adventure. It’s tall triangles make the frame still both laterally and vertically, more so than than the Spaceframe. Now in a Ti version, that stiffness brought about by the frame shape itself should be lessened to make a ride more vertically compliant, not to mention lighter. 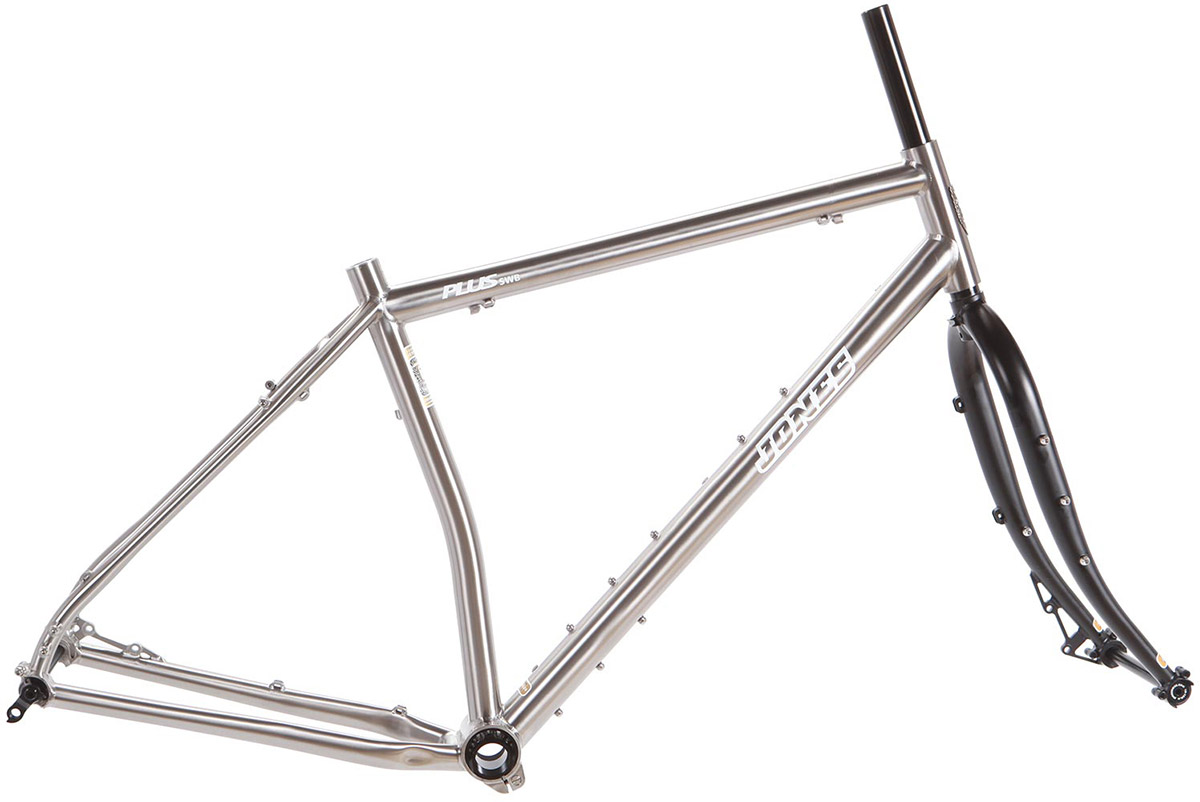 The Diamond frame is the lighter of the two, weighing in at 2232g, while the steel unicrown fork weighs 1436g. 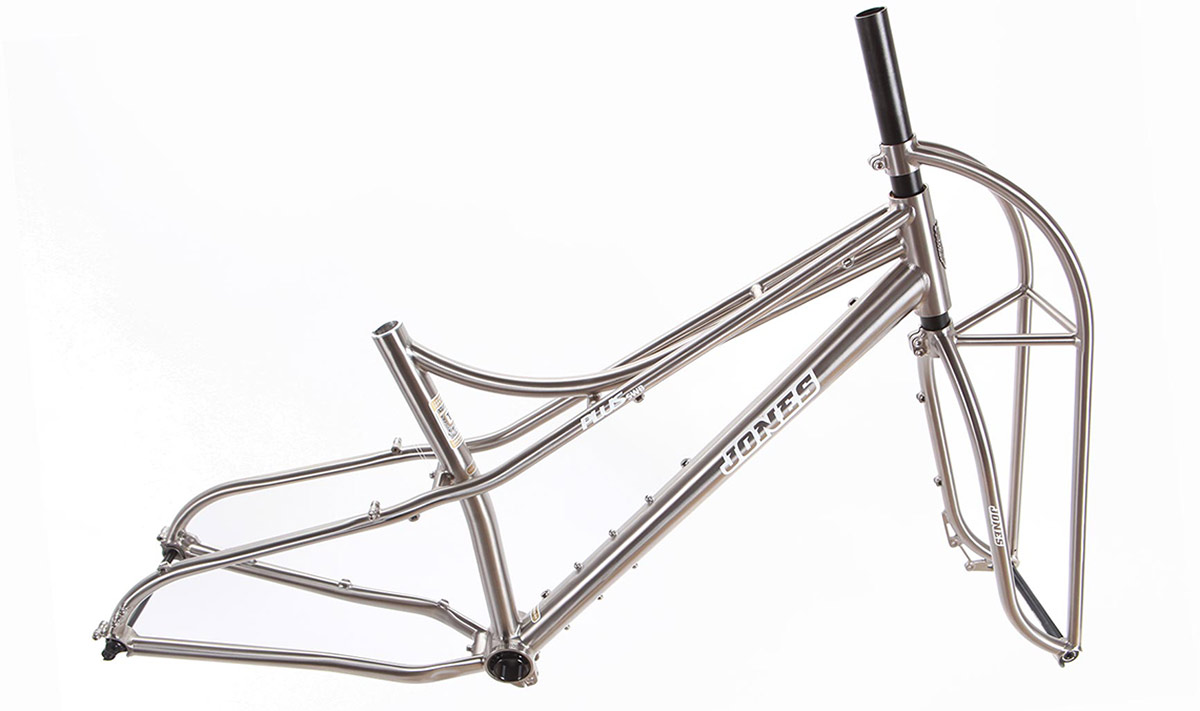 The Titanium SWB Spaceframe weighs in at just 2400g in medium

Last year we saw the LWB Spaceframe get the Ti treatment. Now it’s the turn of the SWB Spaceframe. With a Ti Truss fork, it’s going to set you back $4540. While the geometry of the Spaceframe and Diamond frame almost identical, the Spaceframe design prioritizes ride feel and handling over the ability to carry lots. It has a lower top tube with more standover clearance for the rider to move around the bike, ovalised chainstays and seatstays allow the small triangle rear end to flex vertically, while the non-braced seat tube also flexes rearward under load by virtue of the prebend. The super short (effective) seat tube ensures the frame is stiff laterally. 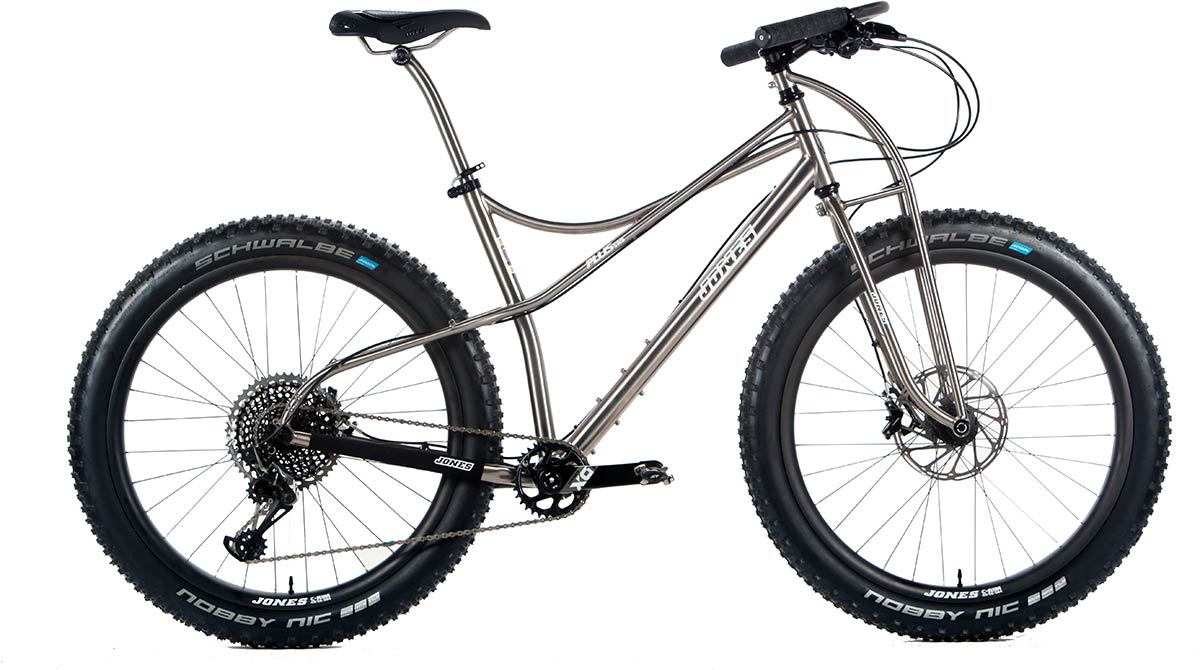 Both Titanium SWB frameset have many of the same specifications as the previous Jones bikes with a 148 x 12mm rear bolt thru axle out back, and a fat bike sized 150 x 15mm thru axle up front compatible with dynamo hubs. Equipped with a 68mm wide Eccentric Bottom Bracket, the frames are single speed compatible. The frames are designed for 27.5″ x 2.8″-3″ or 29″ x 2.3″-2.6″ tires, with big clearance. Both will fit up to a 27.5″ x 3.25″ tyre but with considerably less clearance. 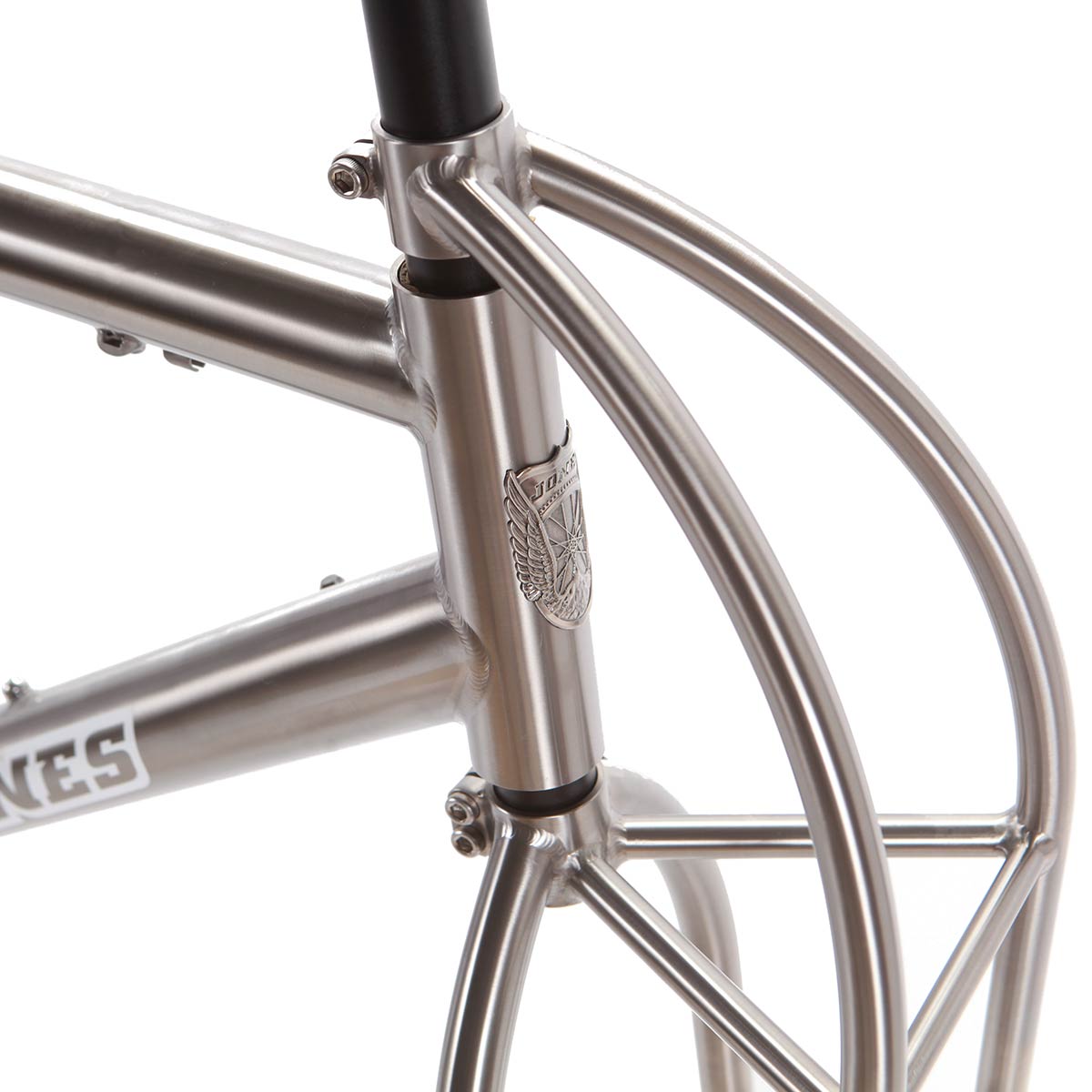 The Ti Truss fork is also composed of tig-welded 3AL-2.5V Titanium tubing. At 435mm long, the Truss is offset by 55mm and has a 51 mm IS disk brake tab. Its design is based purely on handling – Jeff Jones says it is light and stiff, delivers precise, accurate steering and does not flex or shudder under braking. 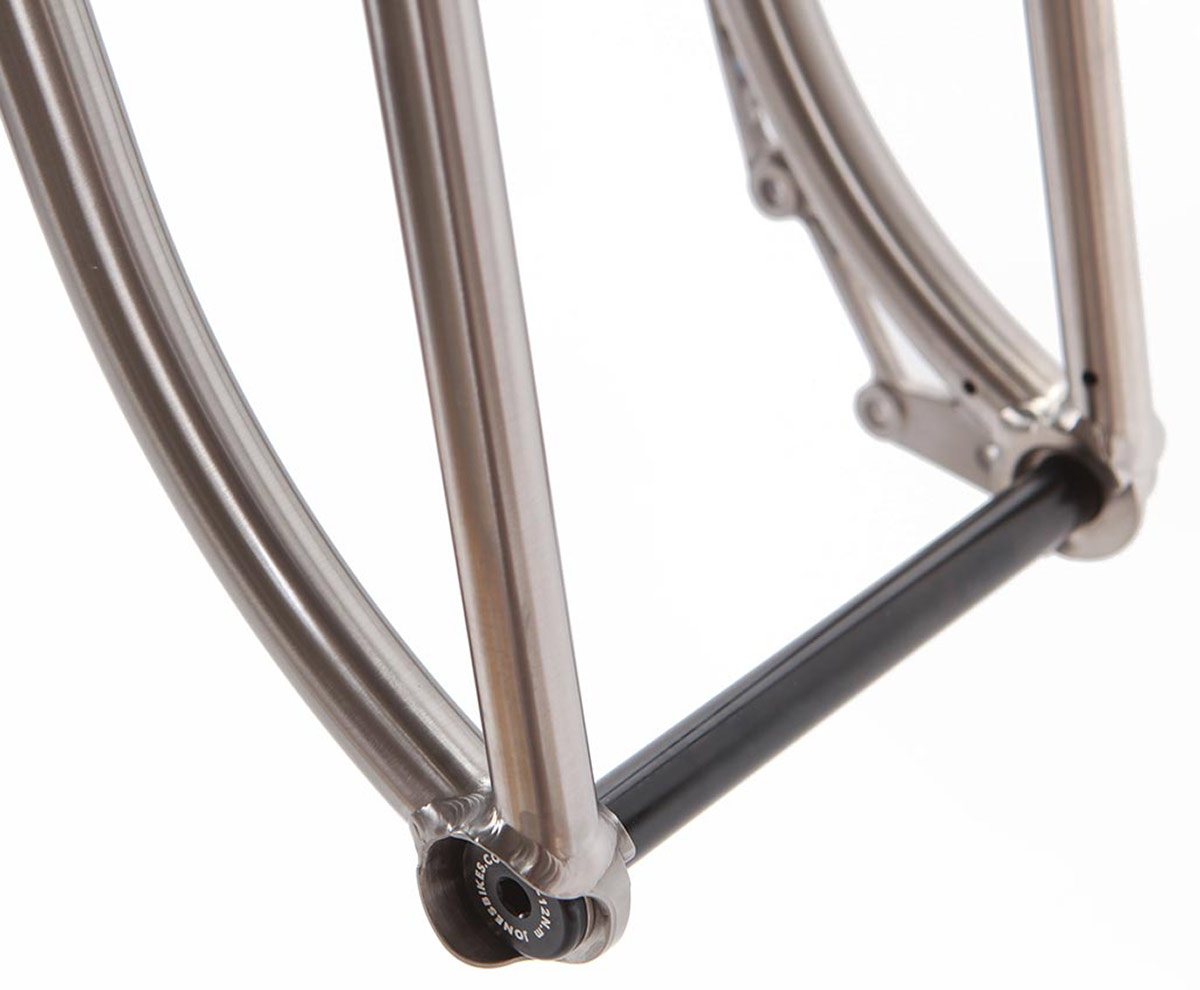 And the possessive is “Its”.

No. The closer two tubes meet at a point say with the down tube and the top tube meeting closer together at the head tube the more the head tube will flex. The marketing behind this frame was that flex is intended.

To me, the diamond frame looks real nice. I know the fork is sort of their trademark thing, but that , and the Spaceframe are too ‘busy’ looking to me, not appealing aesthetically.