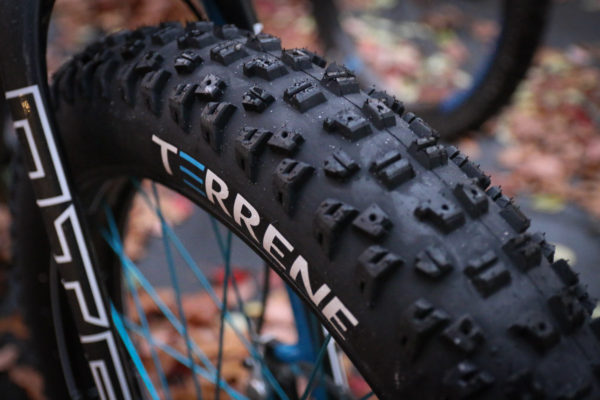 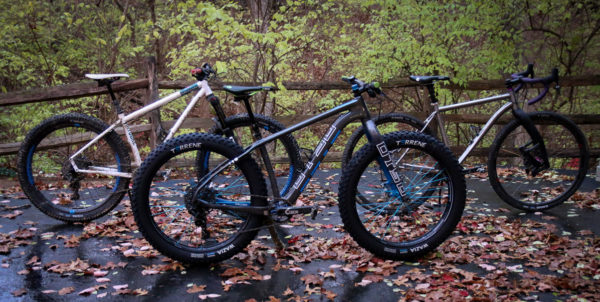 One of the newest players in the tire industry, Terrene popped up with three new models. The Wazia, Chunk, and Elwood seem to follow popular trends in cycling with fat, plus, and gravel tires, but they also conveniently fit into Advocate Cycles’ line up. Which makes sense considering industry Veteran Tim Krueger is at the helm of both companies. Being able to spec your own bikes with your own tires only makes sense.

It also means that Tim and the crew behind Terrene have a vested interest in creating great tires. Not surprisingly, their first rubber offerings are looking pretty good out of the box, and mounted up on three very different rides… 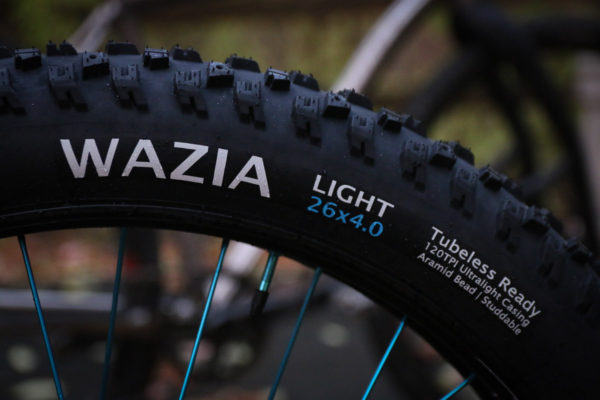 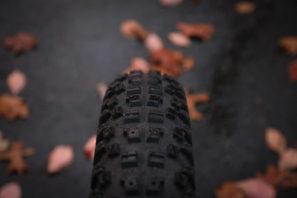 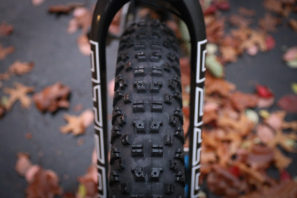 Since fat bike season is just around the corner, the Wazia seems like a good place to start. Available in 26 x 4.0 or 26 x 4.6″, the 4.0″ Wazias above make a nice rounded profile when mounted to HED BAD aluminum rims. You may remember that when I set the BAD rims up initially, I was without access to a compressor and couldn’t get tires to seat on the rim without adding Gorilla tape.

I used this opportunity to remove the gorilla tape and mount the Wazias, and this time I had no trouble getting both tires to seat without additional tape. The BAD rims make this possible thanks to little grommets around the nipple/rim junction that makes an air tight seal. All mounted up, the tires measure a true 4″ at about 102mm wide at the carcass and the widest point of the tread. 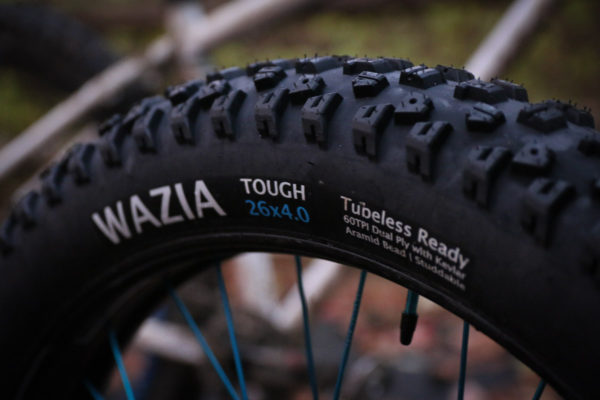 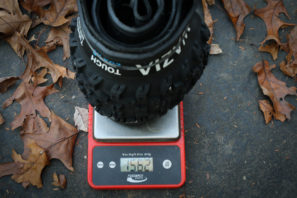 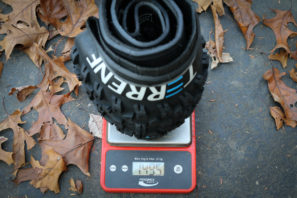 The Wazia is also available in Tough casing that add an additional layer of protection to the sidewalls to prevent from pinch flatting. I was sent both a Light and a Tough casing so I mounted the Tough on the rear where the chance of pinching is higher. On the scale, the Tough casing added only 67g, with the Light casing coming in at 1495g. I just got these mounted so I don’t have any time on them to comment on the ride, but I do like what I’ve seen so far. They are easy to mount, seal tubeless very well (using Orange Seal this time), and have an aggressive tread pattern that is uniformly round when mounted. At $120 for either Tough or Light casings, and $200-$210 for studded Light casings, the Wazia pricing is similar to premium offerings from other tire companies. 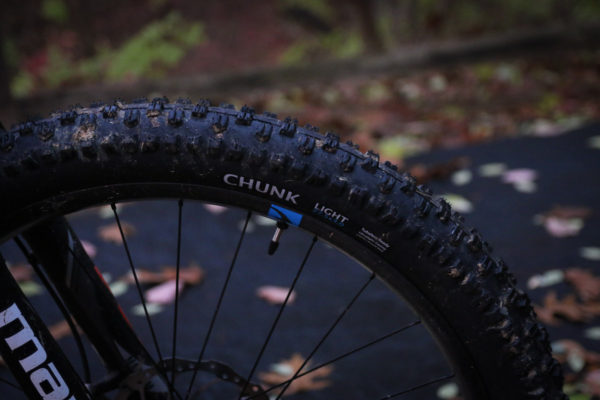 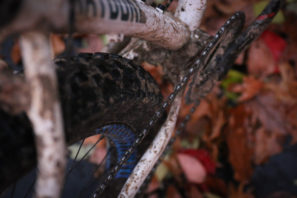 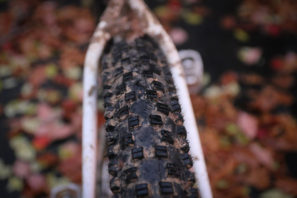 Terrene’s plus tire, the Chunk, lives up to its name with a super burly and blocky tread pattern. The Plus size 3.0″ is only available for 27.5″ tires at the moment, though the tread is available for both 27.5″ and 29″ as a 2.3″ width. Offering a voluminous profile with a very widely spaced cornering tread, the Chunk really digs into the trail at the right pressures. On a fairly muddy ride I was having issues with the tire sliding around on wet roots, but letting out some air trail side made a world of difference. Starting at 15-16psi was too much, and I found the sweet spot that day to be more like 12-13 psi. Two to three psi may not sound like much, but for plus and fat tires that little difference can have a profound effect on the ride of the tire.

As one could expect, the Chunk Light in a 27.5 x 3.0″ fits great inside an Advocate Hayduke frame with plenty of mud clearance. Like the Wazia, the Chunk is true to size measuring 77mm wide at the widest part of the tread mounted to the Reynolds Plus rims. 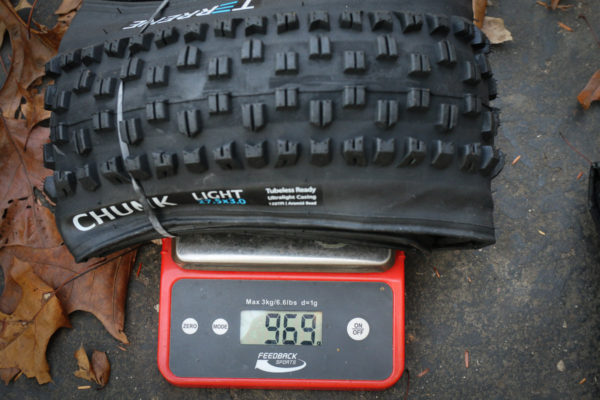 The Chunk Lights in 3.0″ weighed in at 969g which is probably lighter than their burly profile would have you believe. Of all three Terrene tires, these were the loosest when mounted to a set of Reynolds Plus carbon rims, but they still sealed right up with minimal fuss. 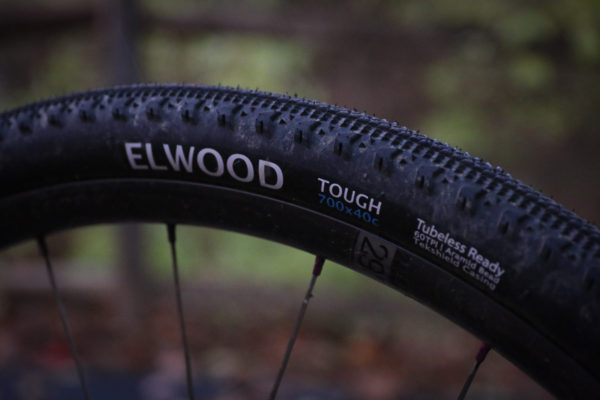 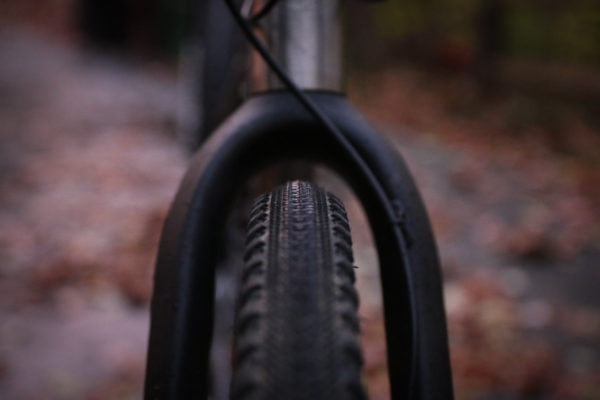 The Elwood is Terrene’s take on a gravel/street/dirt road tire and uses an interesting profile. When mounted to a set of Industry Nine ULCX Pillar Carbon Disc (which was nearly impossible the combination was so tight), the center tread is raised to almost create a tire within a tire profile. The center section then rolls extremely well, but the aggressive side lugs still hold up to hard cornering without slowing the tire down on the straights. Looking at it, you’d think it might have an odd turn-in sensation, but so far I’ve felt none of that. I’ll be putting in quite a few more miles on it, but so far so good. 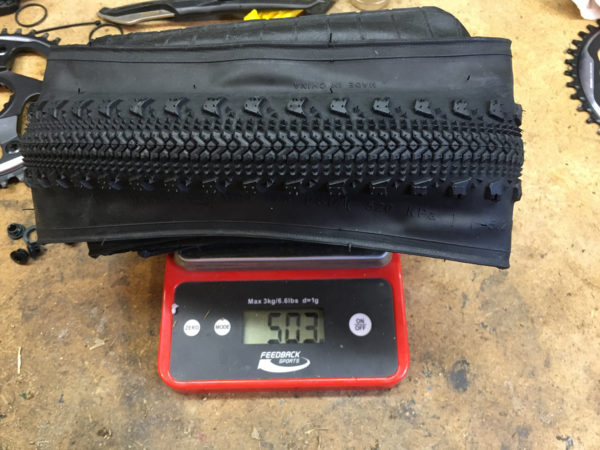 Offered in 700 x 40c or 650b x 47, the Ellwood is also available in either Light or Tough folding casings. The folding Tough 700c casing above weighed in at 503g. Once again, the Elwood measures up at 42mm wide on the ULCX rims. Other than the struggle to get the tires mounted to those same wheels (which required tire wrenches, and I never use tire wrenches, especially on carbon) the Elwood seems equally well designed as the rest of the line up.

For a newcomer to a category that’s been dominated by many of the same brands for years, Terrene looks like they’re off to a great start.

The Ellwood looks like a good choice for my Slate.

I’m really curious about the profile on the Elwood, but not curious enough to buy a pair and find out. I think I’ll wait awhile and let the early adopter types thoroughly test this. Even if they’re pretty cheap a pair of tires is still a significant expense to me. This looks like it’s either a great idea or a terrible idea, and I can’t tell which from just a pic.

Awesome job on first tires! I’m running the Chunk 29×2.3. On a rigid Vassago Bandersnatch.
True to size,or bigger even,mounted with floor pump to WTB I25.
Very good wet season tires. Great in the leaves doing the truffle shuffle.
Not bad rolling on hard pack either even with the tread gnarly style.

Is there any prediction when Terrene will be available in Europe? Or, are they already here and I just haven’t found them yet. I’m always looking for alternatives to my standard 29’er Vittoria tires (which are even hard to get here).