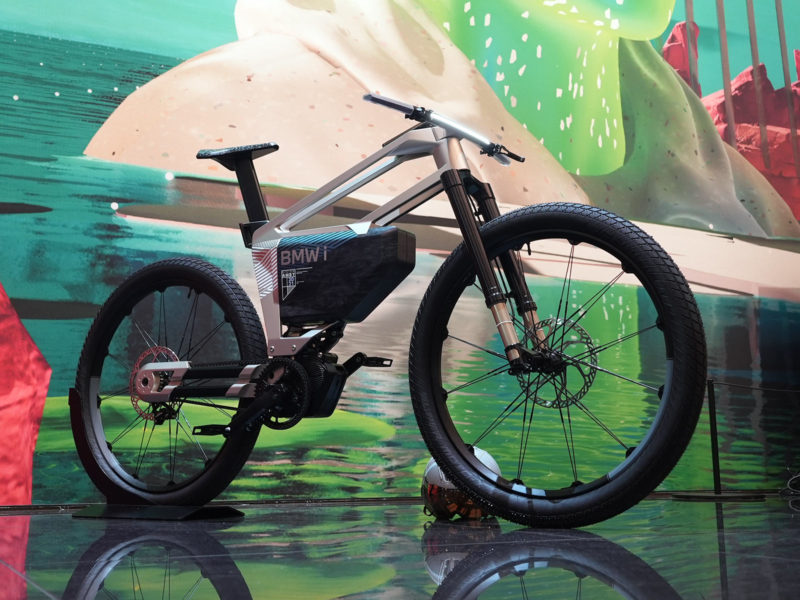 This concept e-mountain bike shows how BMW is looking for ways to provide transportation solutions that work within the laws, but can still be extremely fast and fun.

Not only were they showing this eMTB concept, but also a closer-to-production Motorad and a still-early electric dirt bike, each with their own fun little touches… 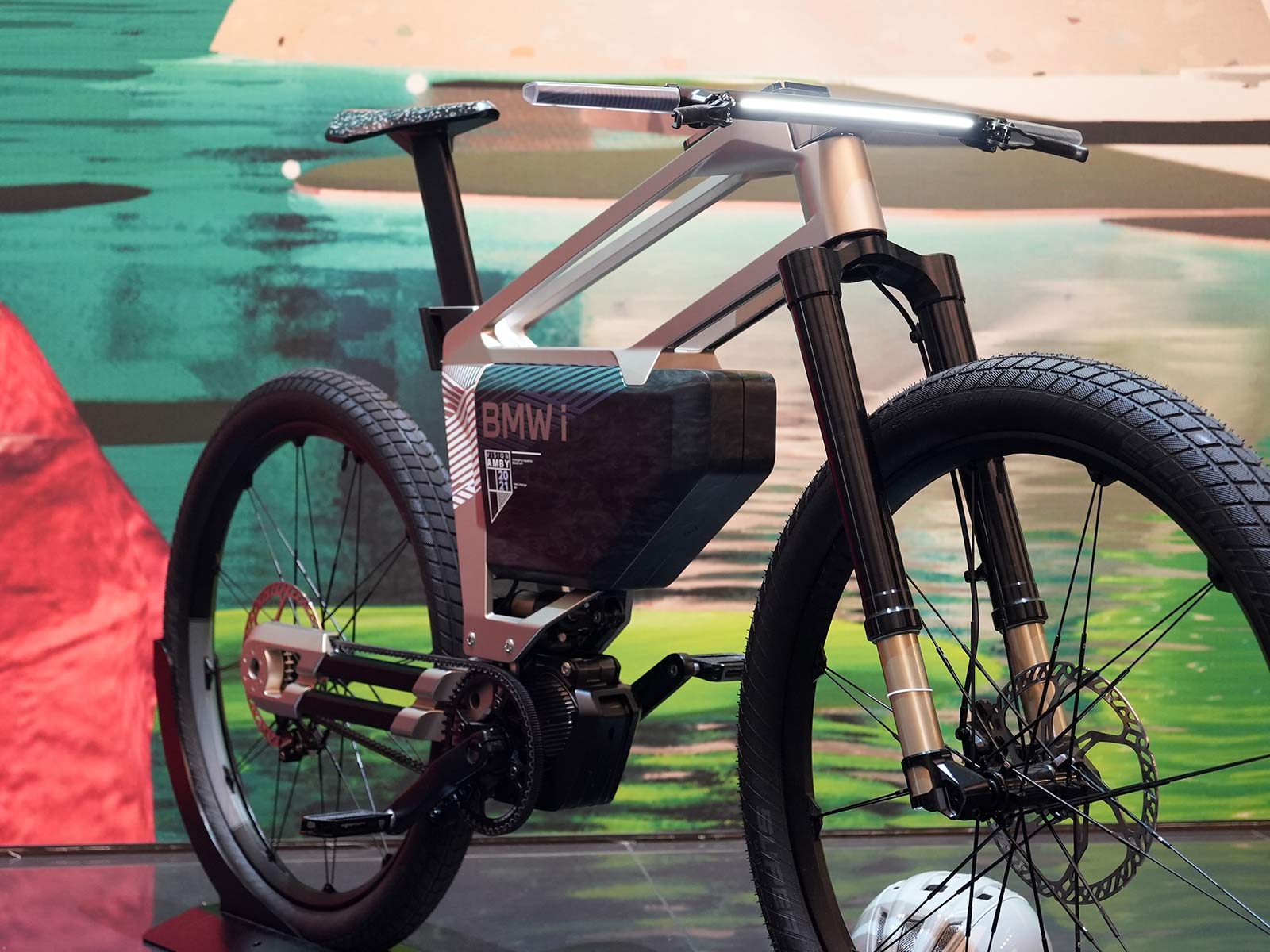 To understand the problem they’re trying to solve with this e-MTB, you have to understand German law as it applies to e-bikes. Currently, an electric assist bicycle is classified as a “pedelec” and is legally limited to 25km/h (just 15.5mph). If you have a long commute or are an avid cyclist, that’s painfully slow.

You can ride an S-pedelec that’s allowed to go up to 45km/h, but you have to add a license tag and pay annual insurance (it’s cheap, but still), and you can’t ride them on city bike paths. And then there are electric motorcycles and mopeds that are allowed to go much faster.

The engineer and designer behind this project think those rules are somewhat obsolete, based on moped use from 50 years ago. But, things are slow to change, so they wanted to show that an e-bike could be all things for all riders while abiding by the laws of the land. Here’s how it works… 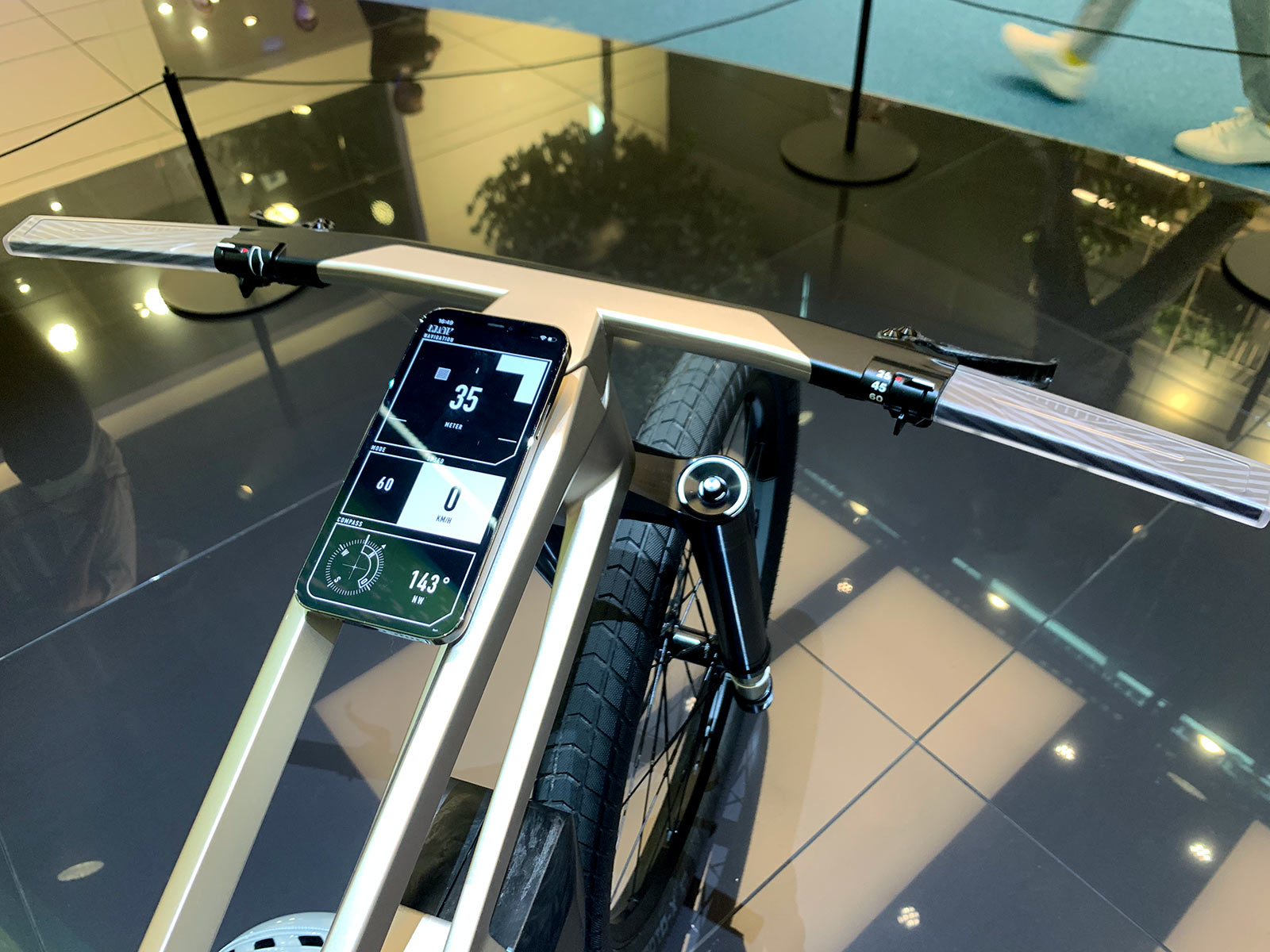 Their solution is an app that uses geofencing to automatically adjust the bike’s top assisted speed based on where you’re riding. If you’re on the bicycle autoban, it’ll assist up to 60km/h (37.3mph). 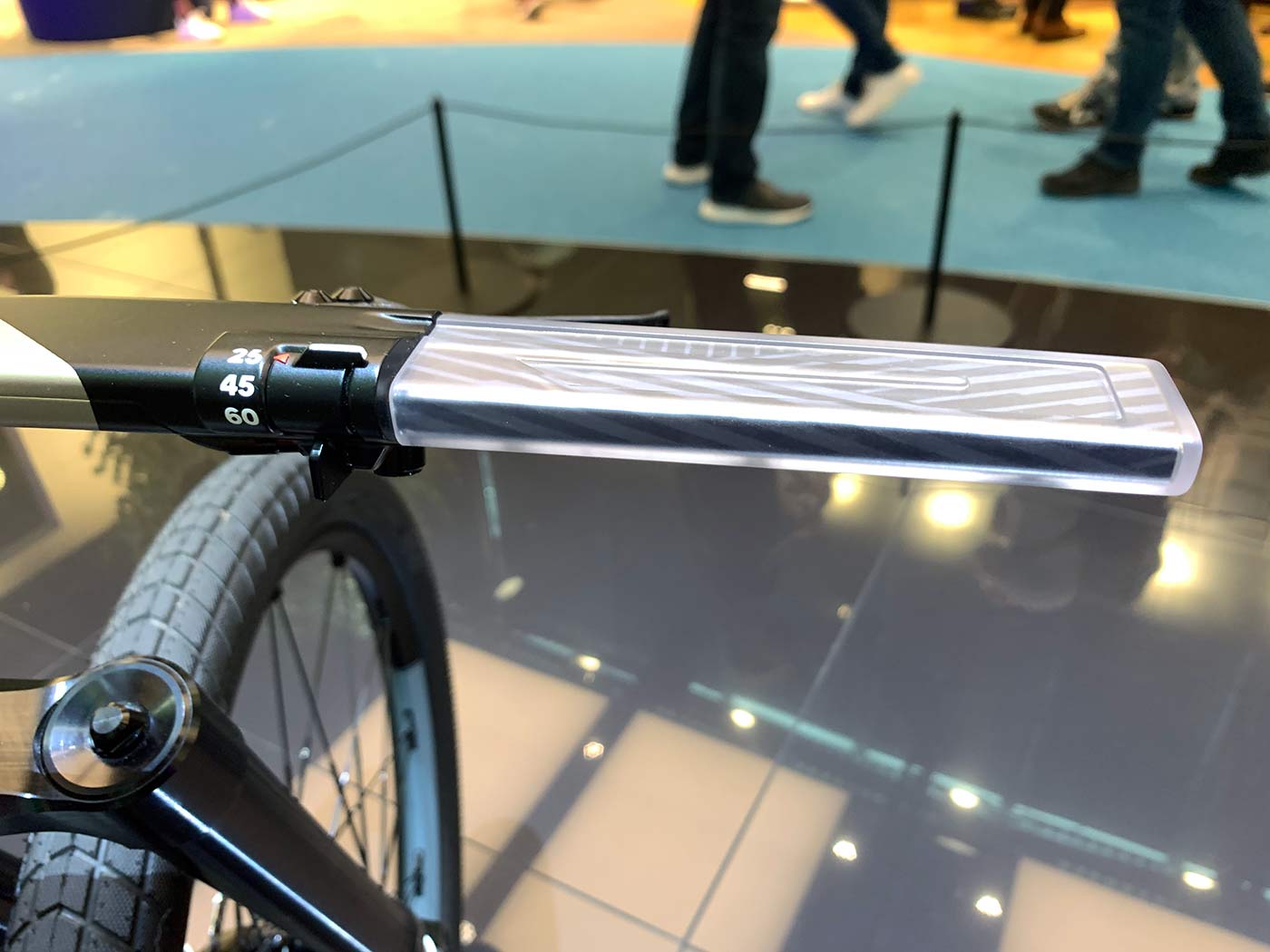 Of course, there’s a manual switch, too, so you can use the bike without the app. 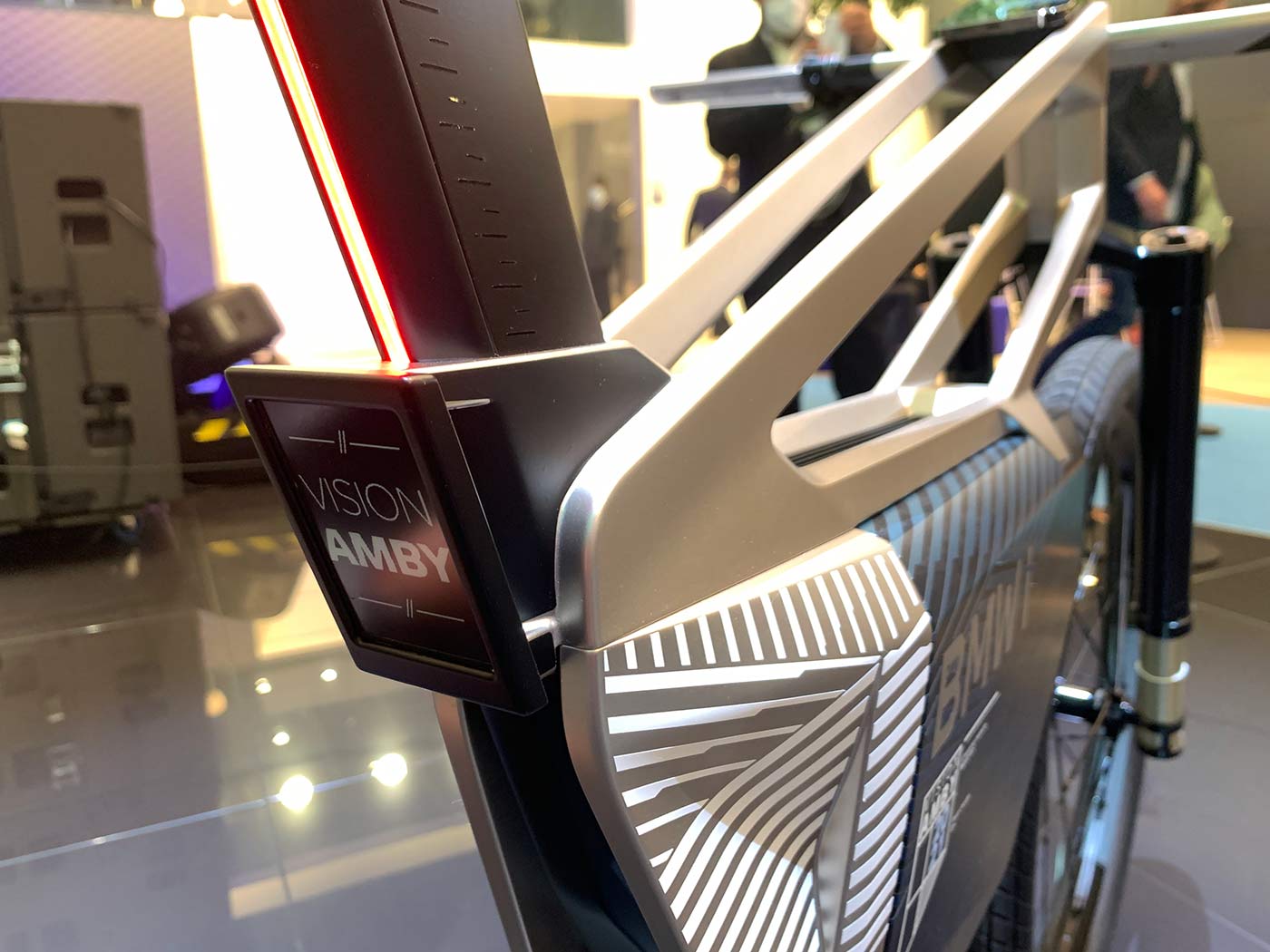 An electronic (think B&W e-reader) license plate can change based on where you’re riding it and how fast, keeping you compliant with licensing and insurance laws, too. 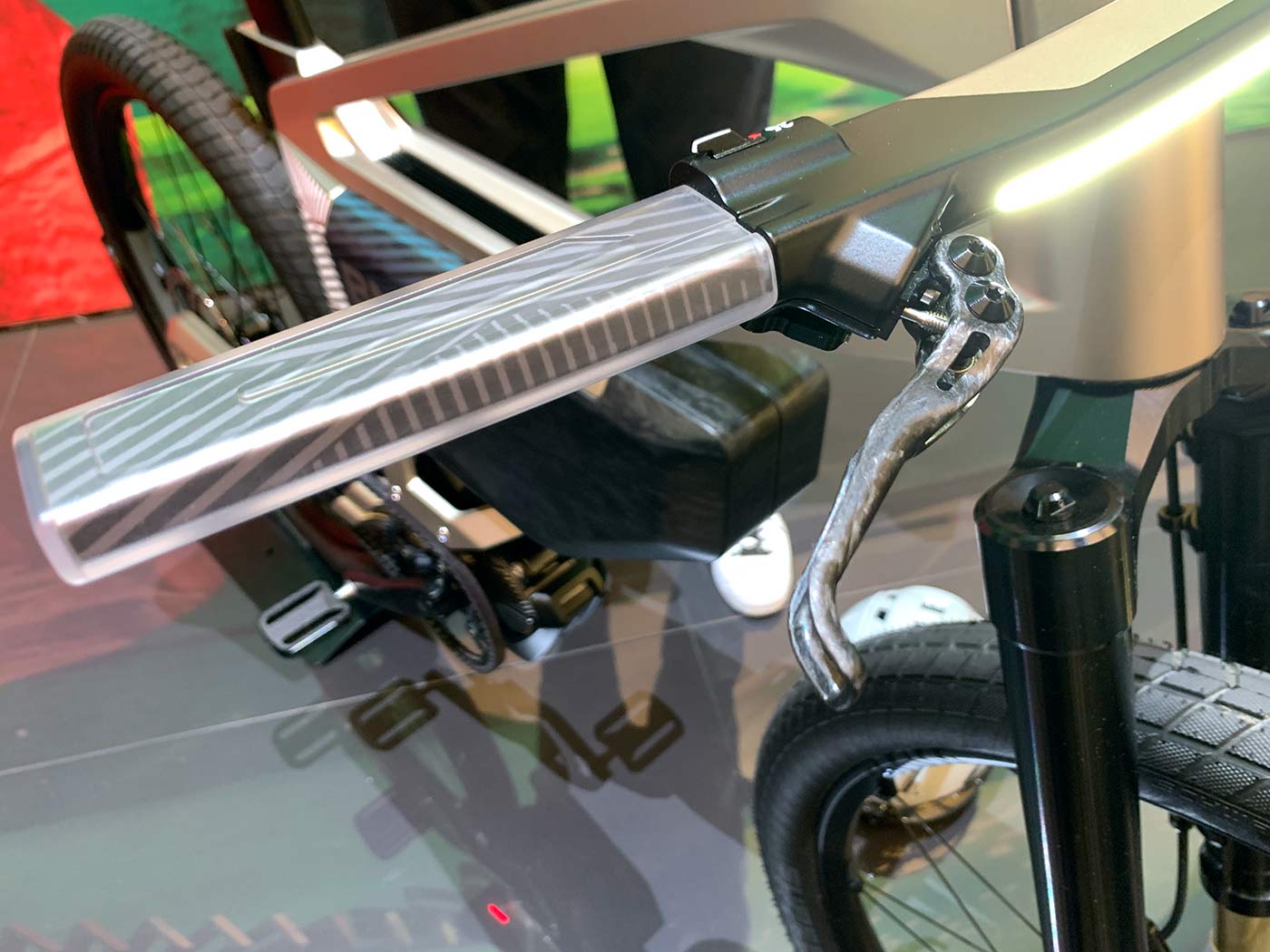 It wouldn’t be a full show concept bike if there weren’t more to it. The handlebar is fully integrated with headlight and brake levers, hiding the master cylinder inside. The clear grips cover turn signal lights, activated by small switches on either side of the handlebar (along with other controls). 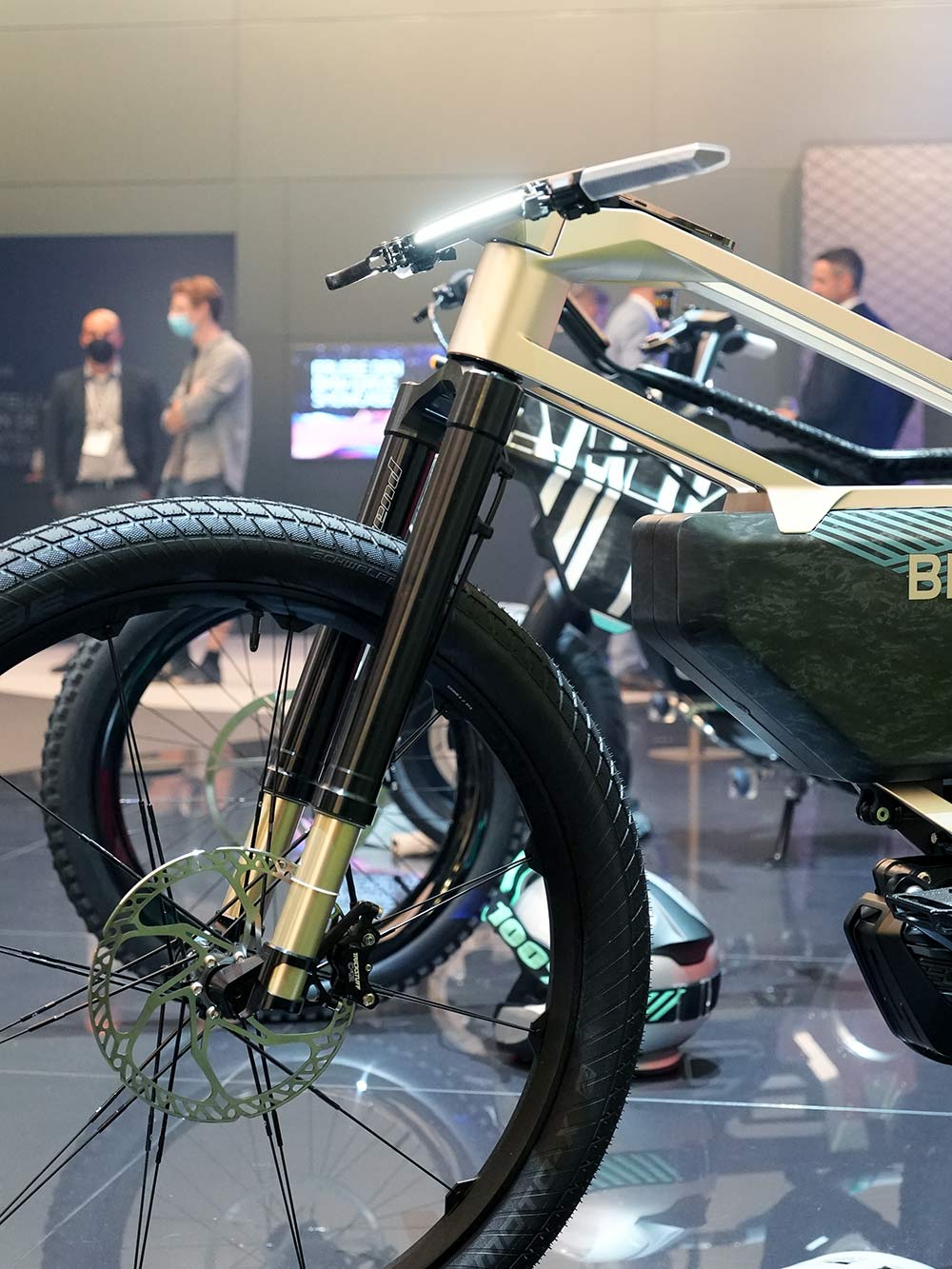 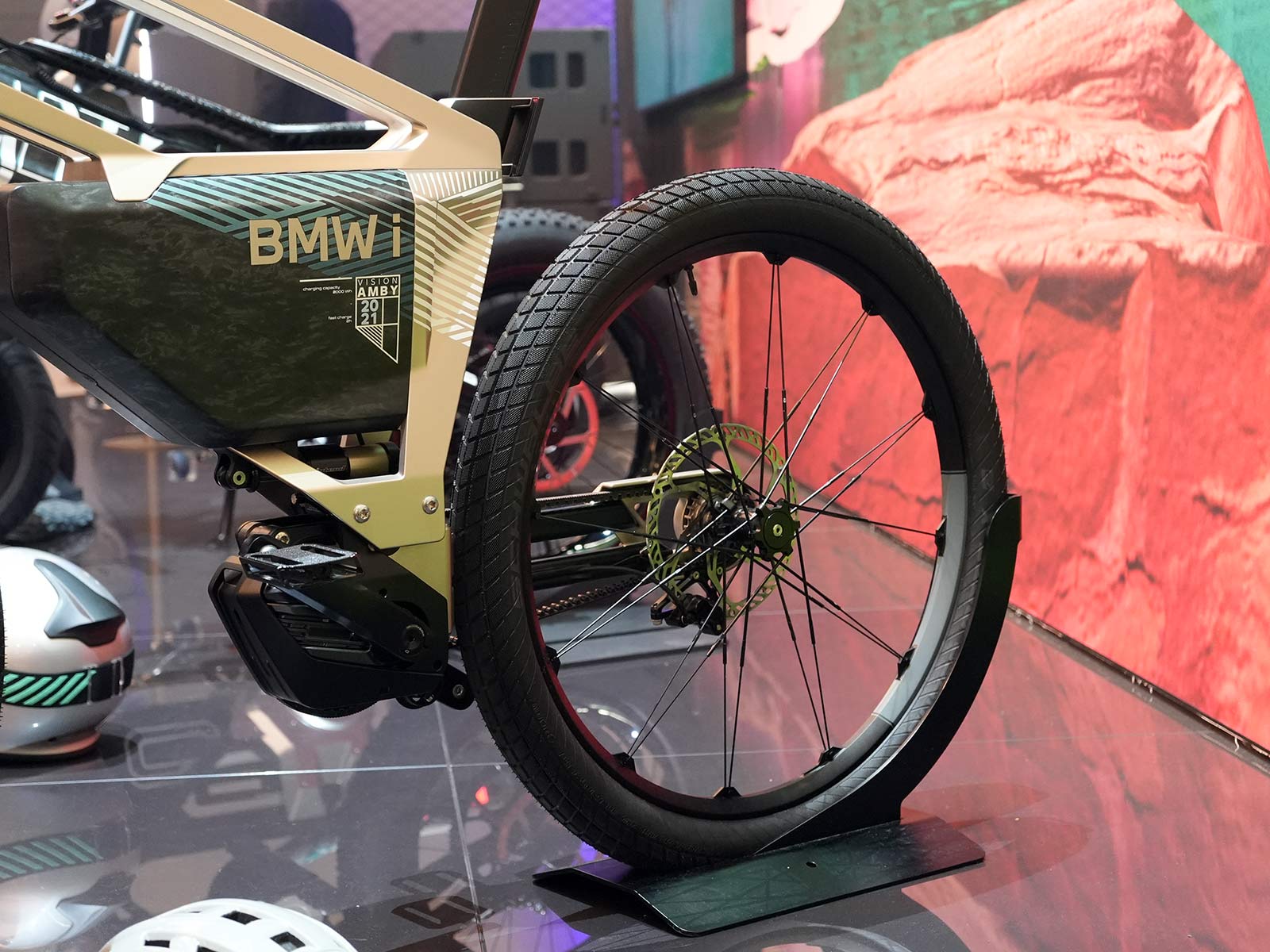 A massive 2000Wh battery pack sits inside the carbon fiber enclosure, which fits inside a frame made with recycled aluminum. 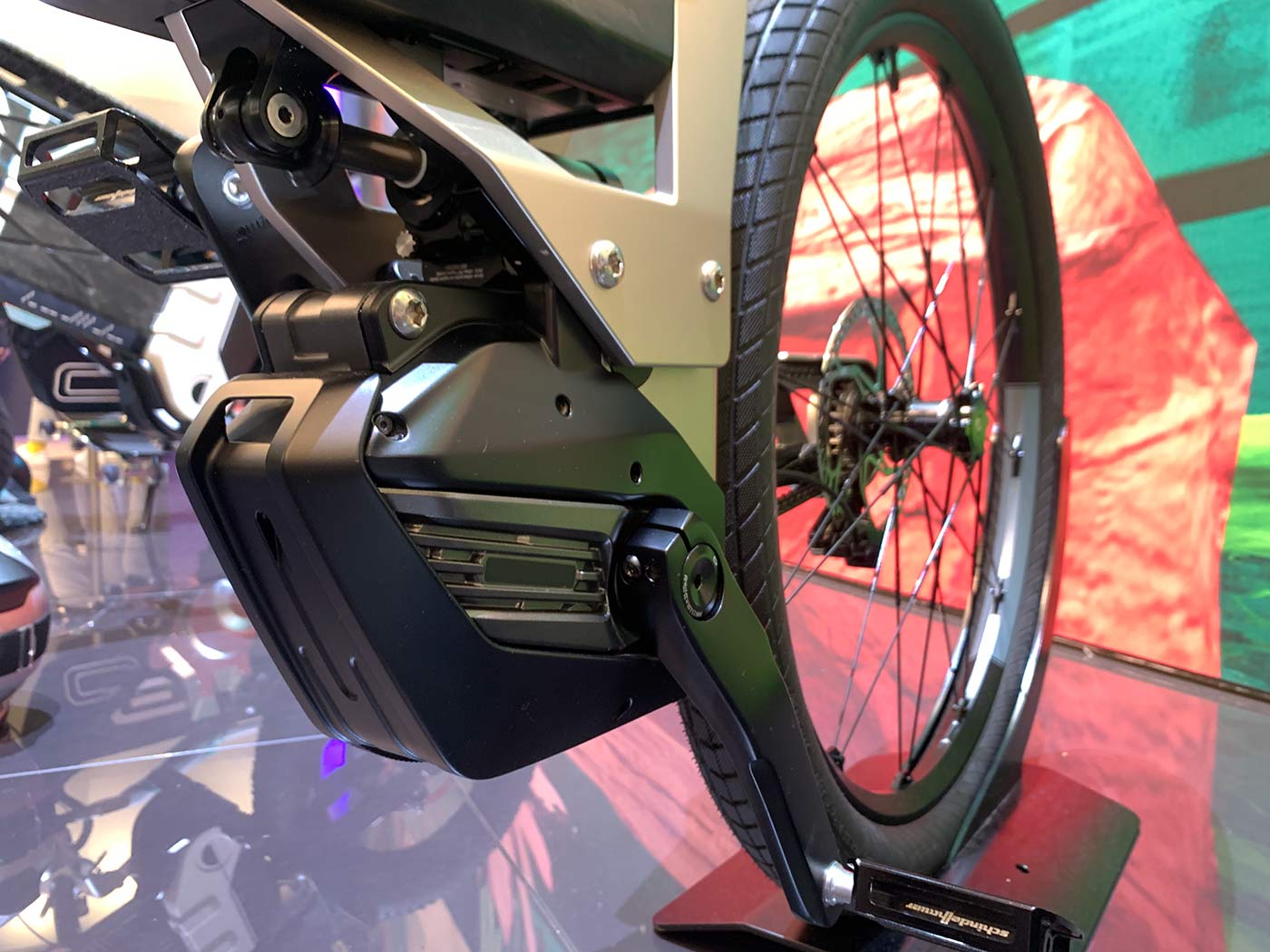 While this prototype had a de-badged Shimano STEPS motor, BMW told us that whatever iteration of this bike actually makes it to production would have a motor of their own design. That’s likely out of necessity since current e-bike motors mostly top out at 45km/h worth of assist. 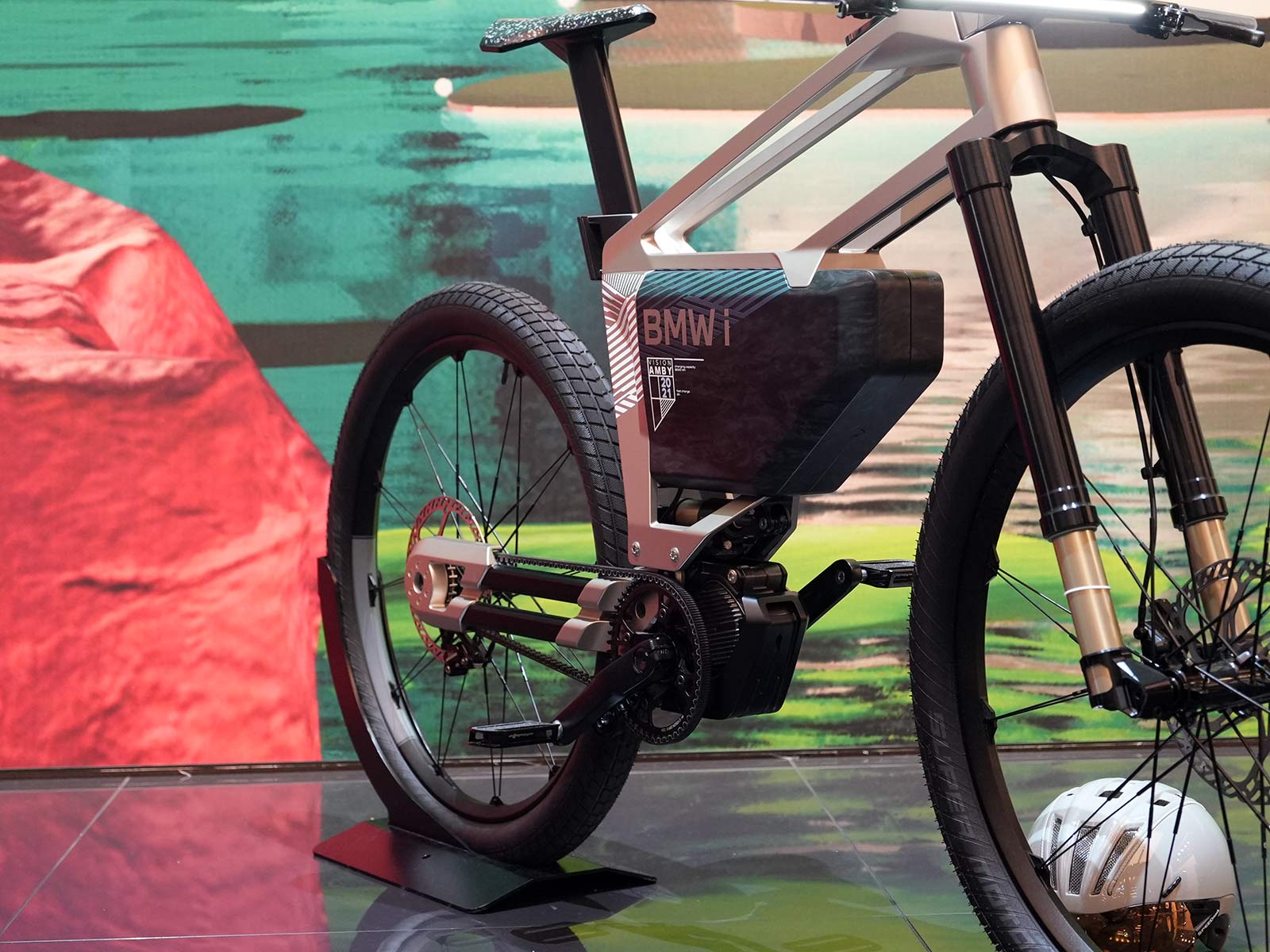 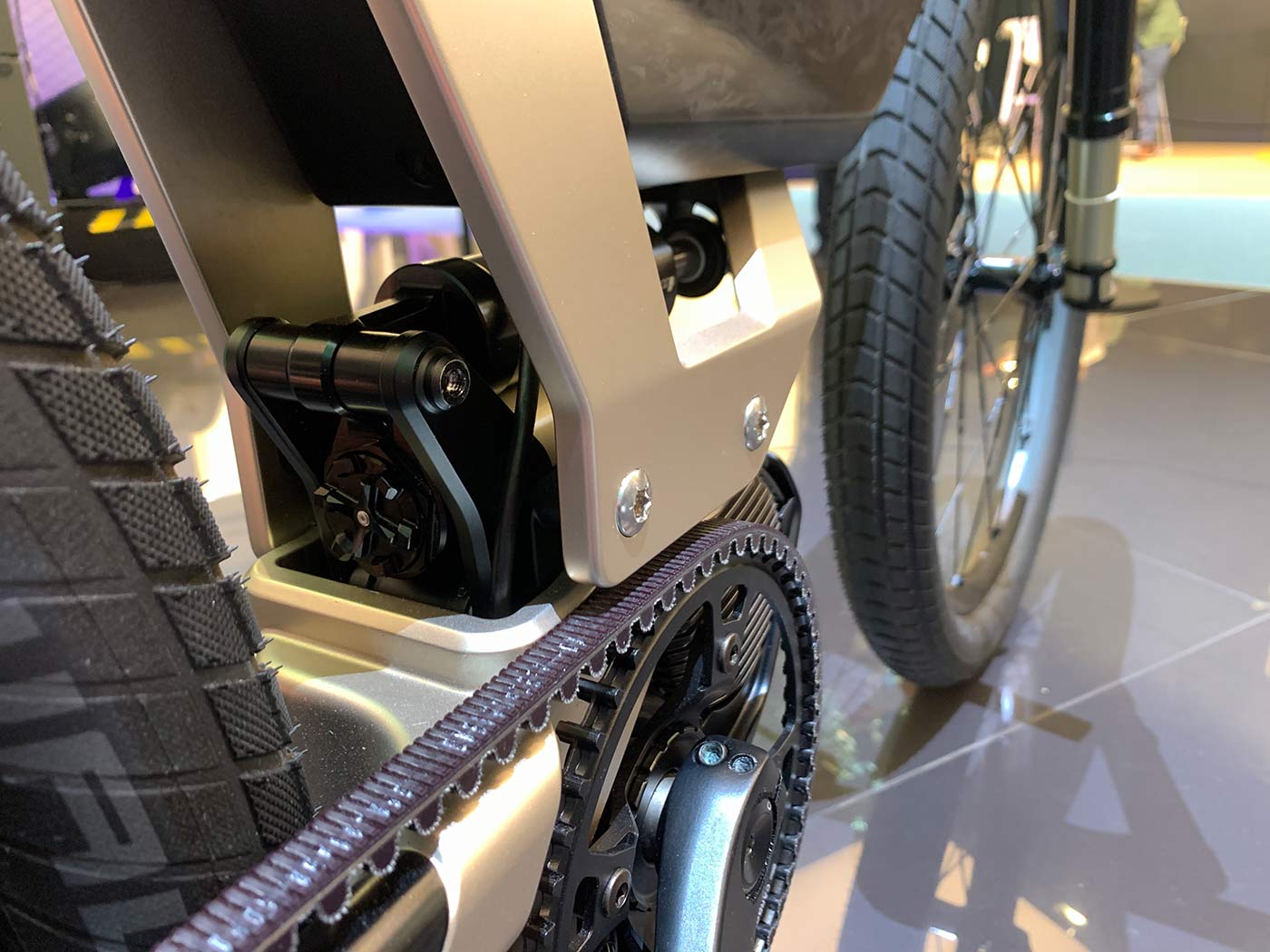 The rear suspension uses a small multi-linkage design with the main pivot sitting just slightly above and behind the crank spindle. A spring-loaded tensioner keeps the belt tight while allowing enough growth to accommodate the axle’s travel path. 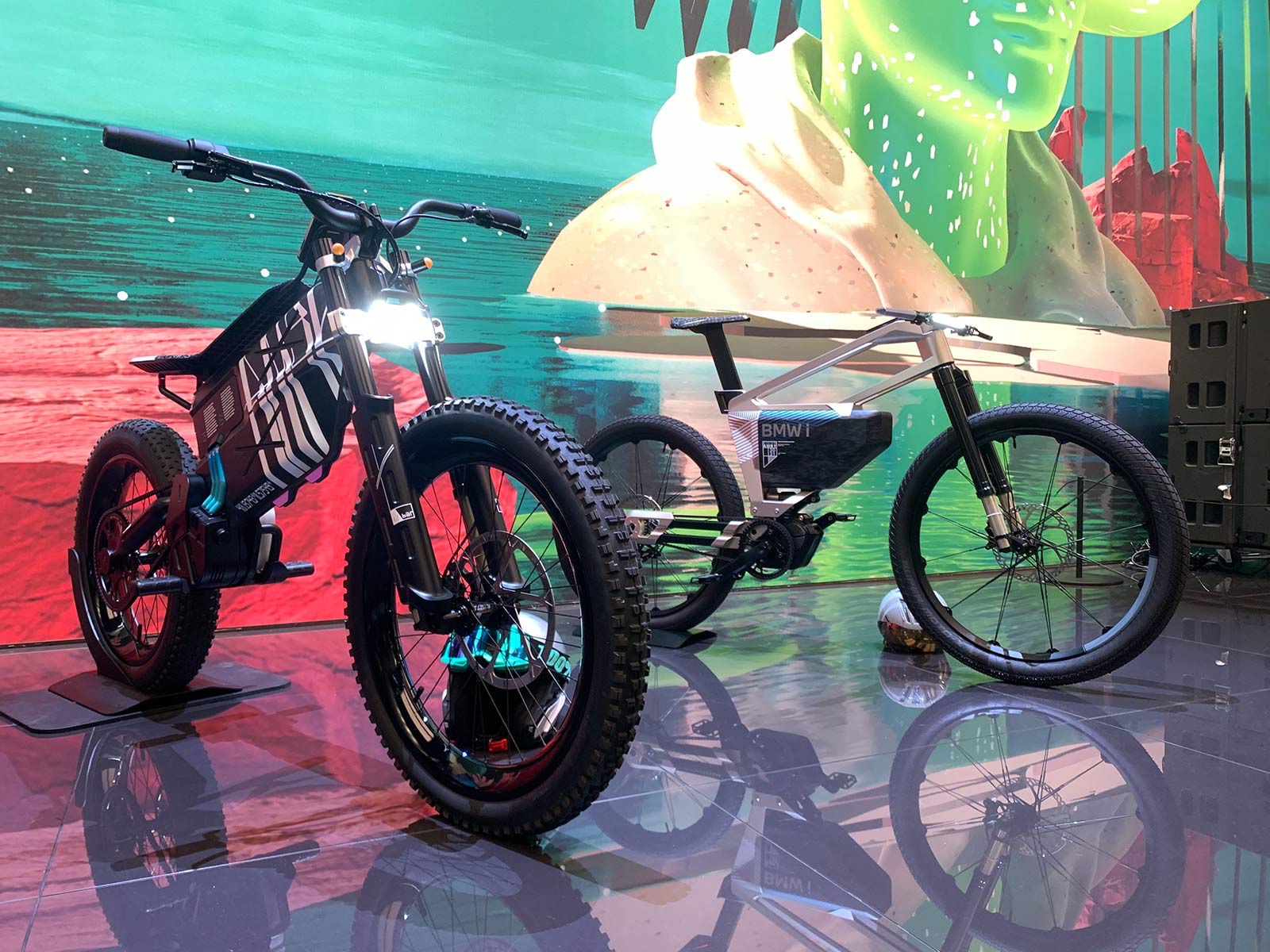 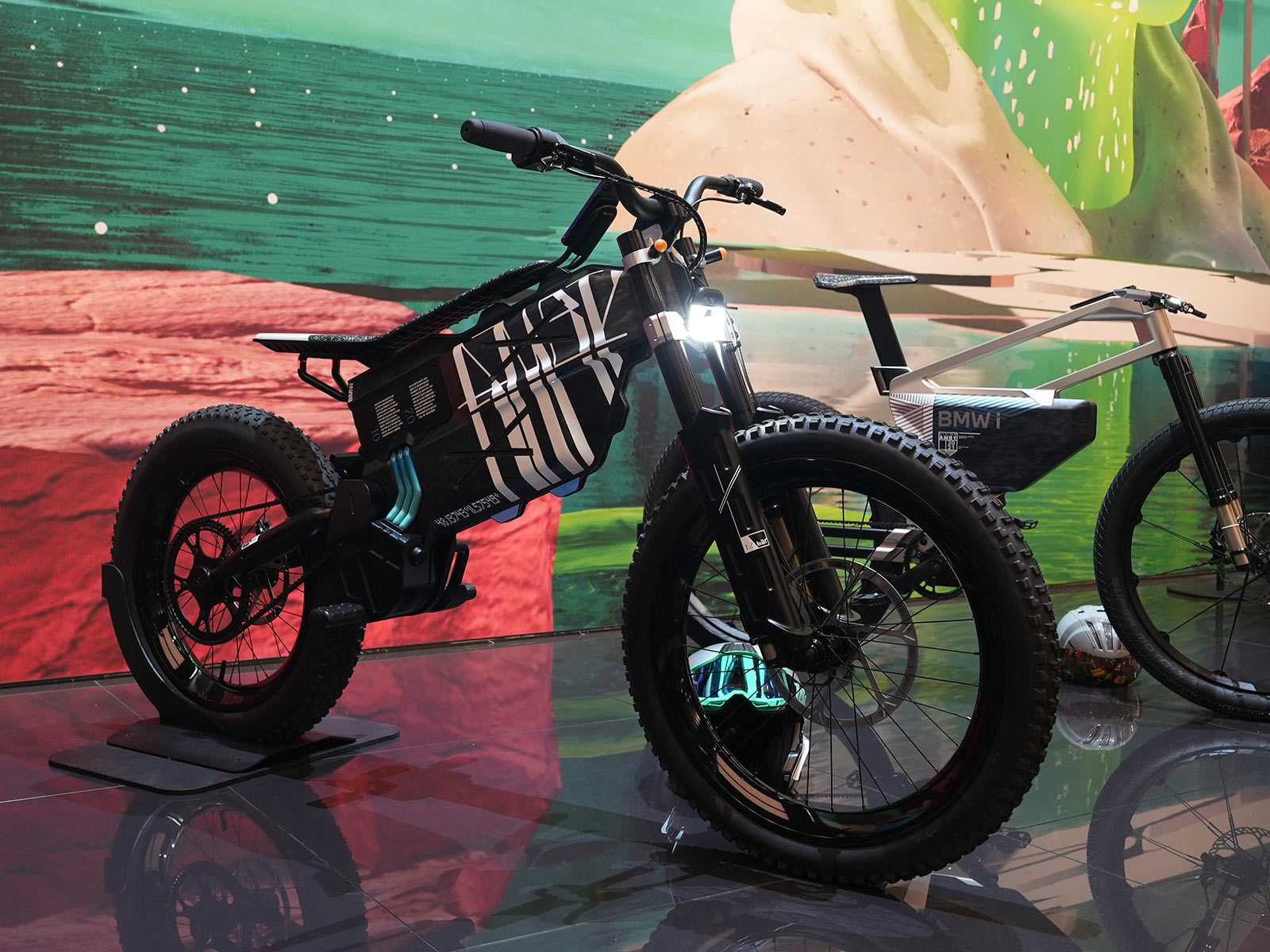 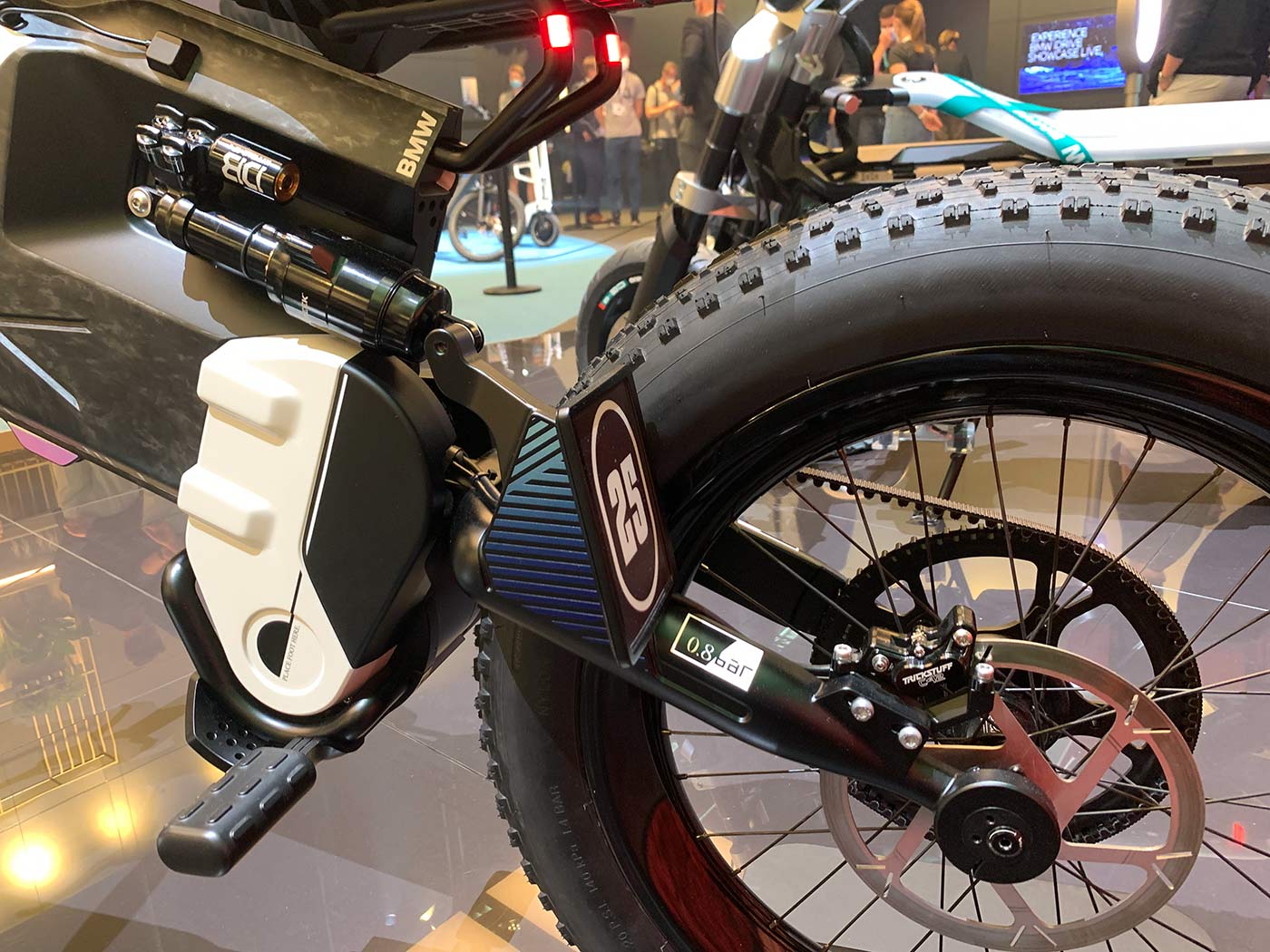 …we found a Cane Creek Double Barrel handling rear suspension duties. It also had Trickstuff brakes (the new C42 that we saw at Eurobike), and a larger digital license plate. 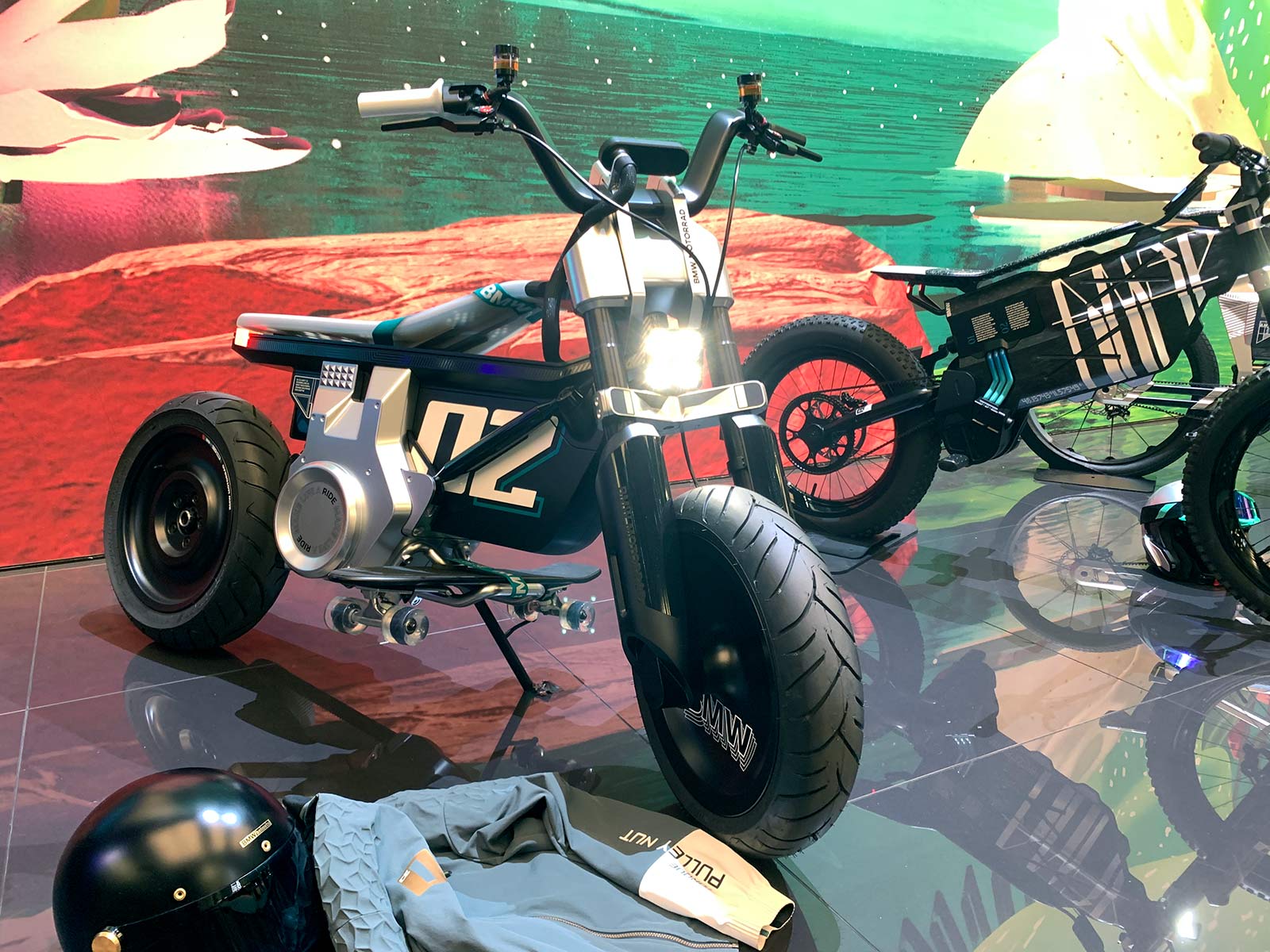 While the e-bike and dirt bike are mostly design exercises and thought experiments right now, this electric BMW Motorrad is closer to getting the green light. It looks like a far more playful option than their already-availalbe CE o4 electric cruiser, but would need a couple tweaks to make it ready for the streets.

As shown footpegs are replaced by a skateboard deck, probably not great for leaning into a corner. We do hope the “Make Life A Ride” text stays put, though.

We spotted these at the IAA Mobility show in Munich, a first-year event focused on the future of transportation, with a heavy focus on e-mobility and smaller scale options like bikes. Look for more coverage from the show over the coming weeks, as there are a lot of bike brands here. Check out BMW’s IAA presentation on circular sustainability for more about their launch and concept vehicles.

the only reason this bike exist is to sell more cars, which is in no way providing any future transport solutions

How strange that they won’t do a concept car with the same geofenced speed limiting.

Because it a bicycle, unless you want to pass a test and get insurance this is what you get

Now go add that to your cars. Not got the balls for that? Oh ok.

I guess the battery will still have a good 500-700Wh capacity once they shave it down to a width that’ll make the bike pedalable for people other than Yosemite Sam.

Sure, because everyone knows that motor vehicle drivers never ever drive over speed limits (especially in town) thanks to their licence and that the pedestrians or cyclist they maim / kill while speeding are safe thanks to their insurance. Happy to see that BMW completely get it with their super hypocritical geo fenced speed limited bike concept.

Geo fencing on cars what a great concept and made tamperproof