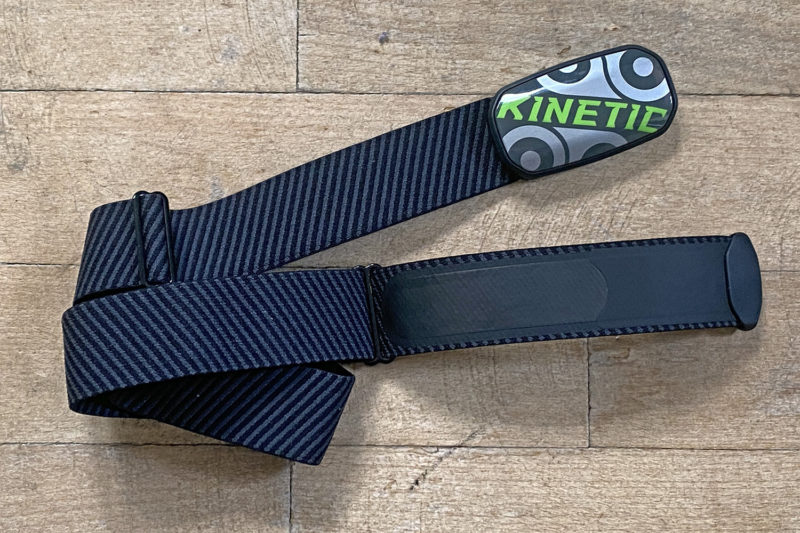 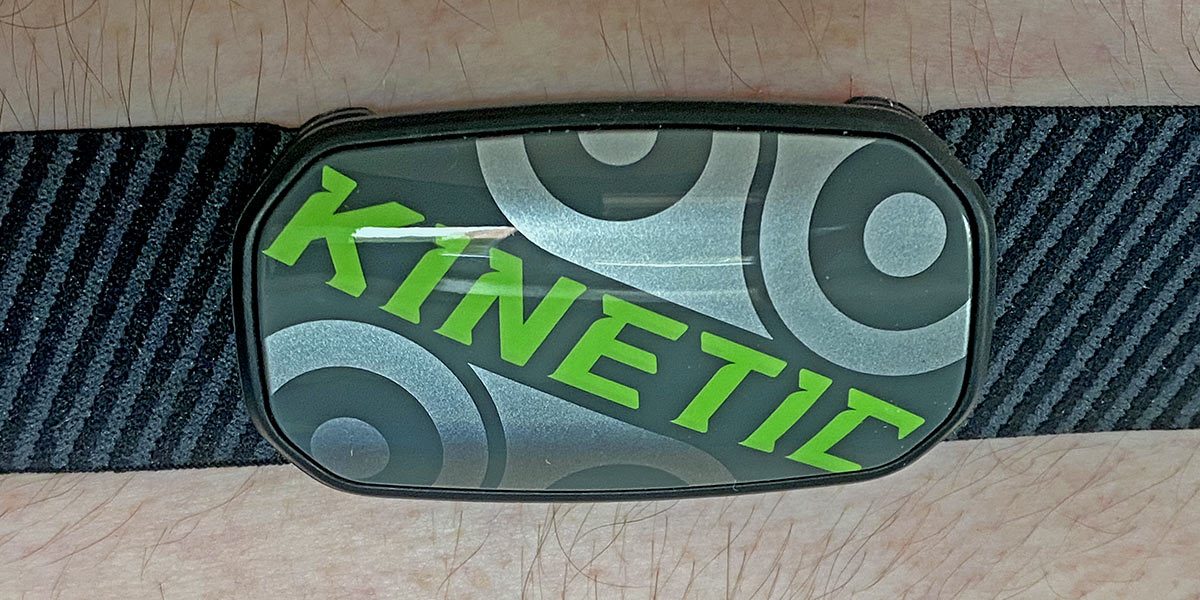 There really isn’t much revolutionary about Kinetic’s new lightweight inRide H1 heart rate monitor. That’s not really a bad thing, though. Like most other similar devices, you get a small sending unit that sits in the middle of your chest, snapping together two ends of an elastic chest strap with contacts that sit against your chest to sense your heart rate. 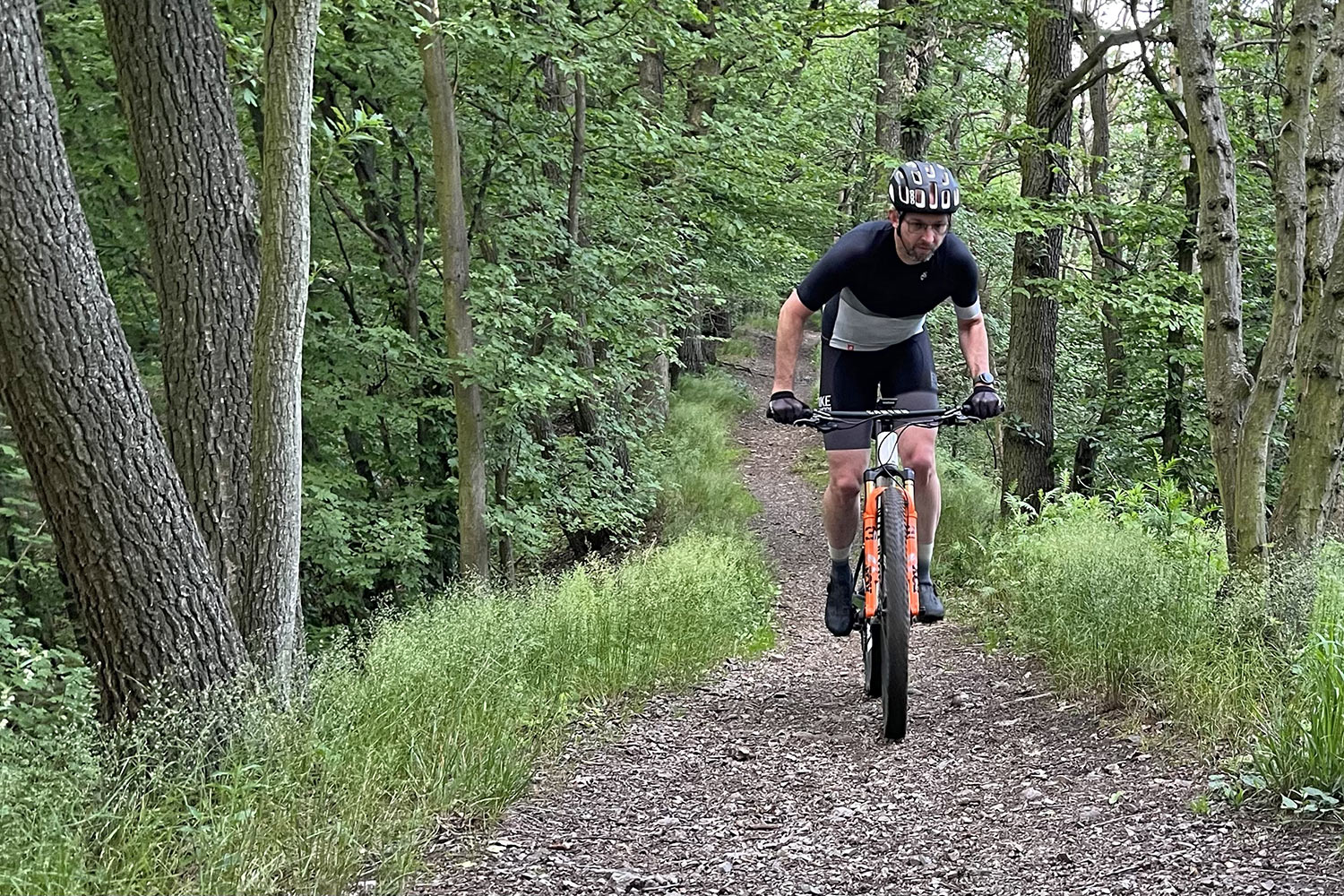 It’s a basic device, but a core function that most cyclists need to track their fitness and manage training efforts. While heart rate monitors tend to last for many years, eventually their contacts do tend to corrode, and you may find yourself needing to replace your current one.

When that happens, Kinetic’s new inRide H1 would be a great replacement option. 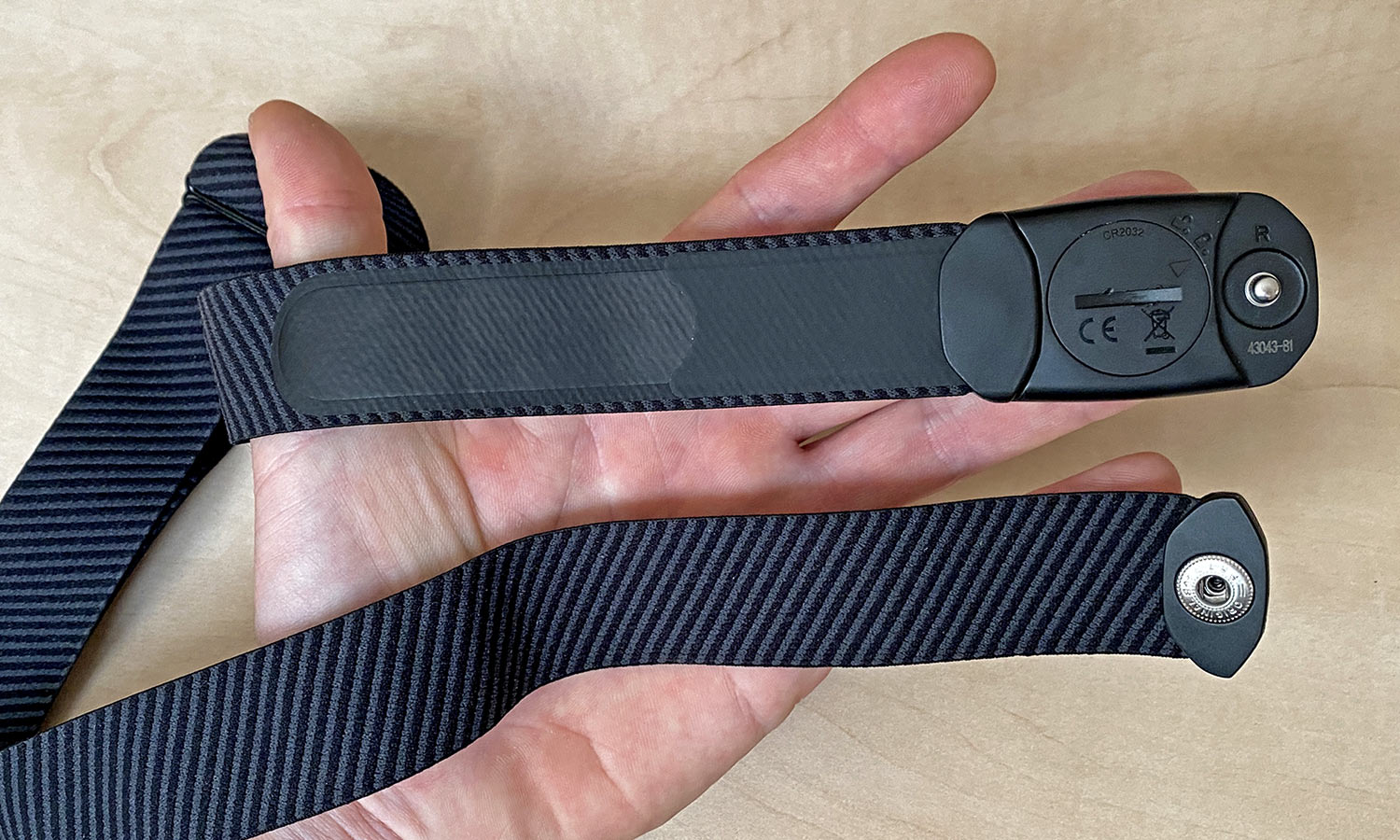 The inRide H1 device communicates in both Bluetooth & ANT+ to connect to pretty much every smart trainer, GPS cycling computer, smartphone, smart watch, or computer in existence… syncing your heartrate with exercise fitness data on probably every training platform out there. And it looks like it will connect and transmit data to one device on each stream simultaneously. 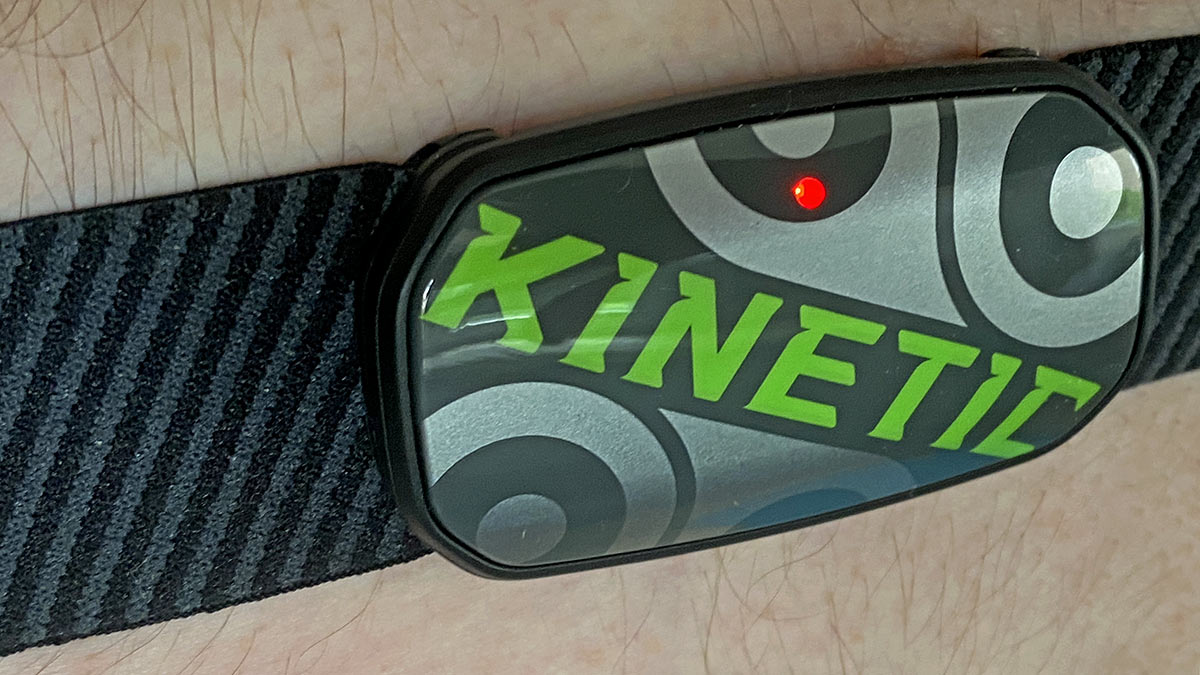 Kinetic says the H1 has reliable connectivity, indoors & outdoors even where there are many other similar devices in use. It claims a 1000 hour life on the standard CR2032 button battery, and there’s a little red LED that lights up when it starts transmitting.

All the heart rate data I’ve collected so far paired to a Wahoo Elemnt Roam seems consistent, accurate, and free of any errors or gaps. 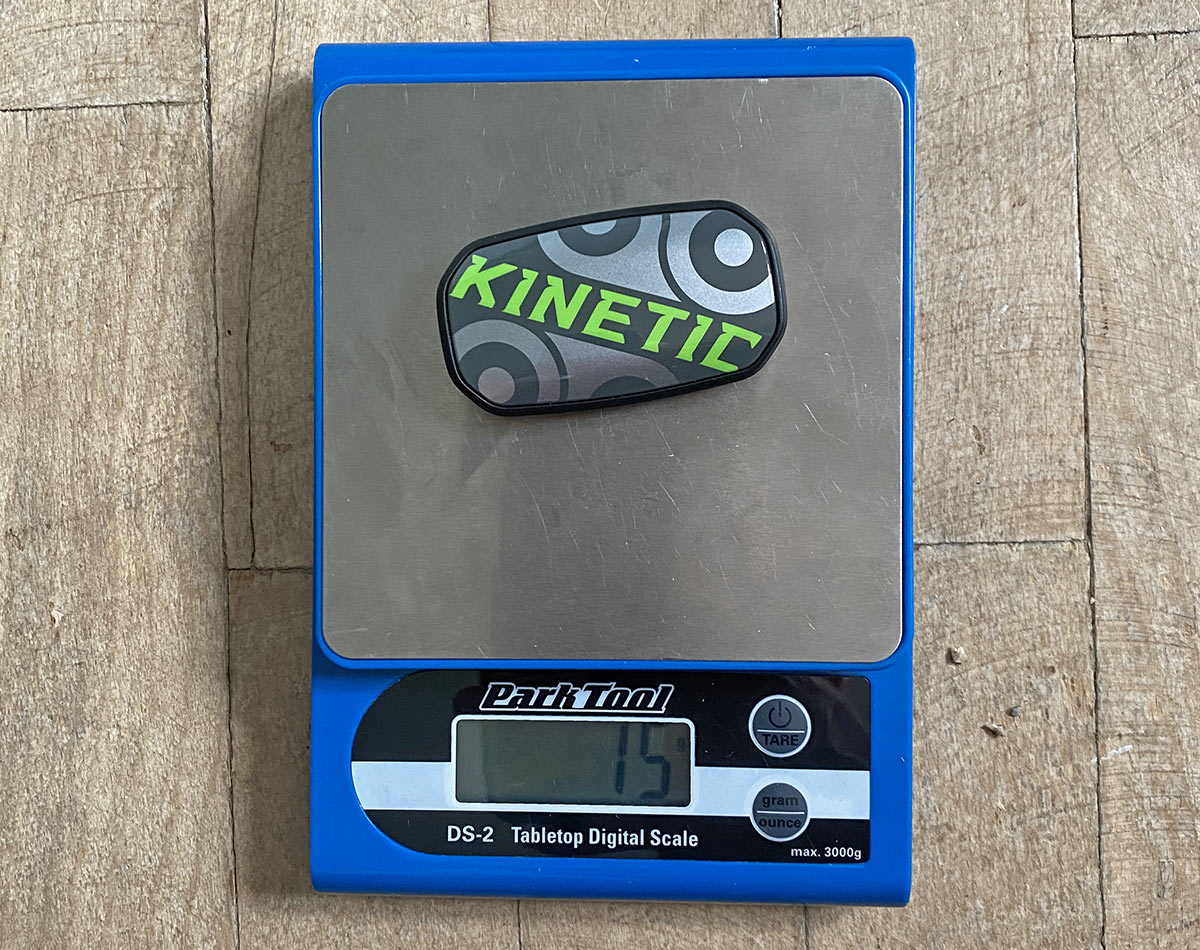 It serves all of the basic monitoring functions without any trouble.

So, the actually important feature of the Kinetic inRide H1 heart rate monitor is its light weight. Kinetic says it weights 0.6oz or 17g, which is a bit reductive as that’s just the sending unit. On our scale, the sending unit was actually two grams lighter – just 15g. But that is really only 1-4g lighter than other sending units I have from Wahoo, Polar & Garmin… not really noticeable. 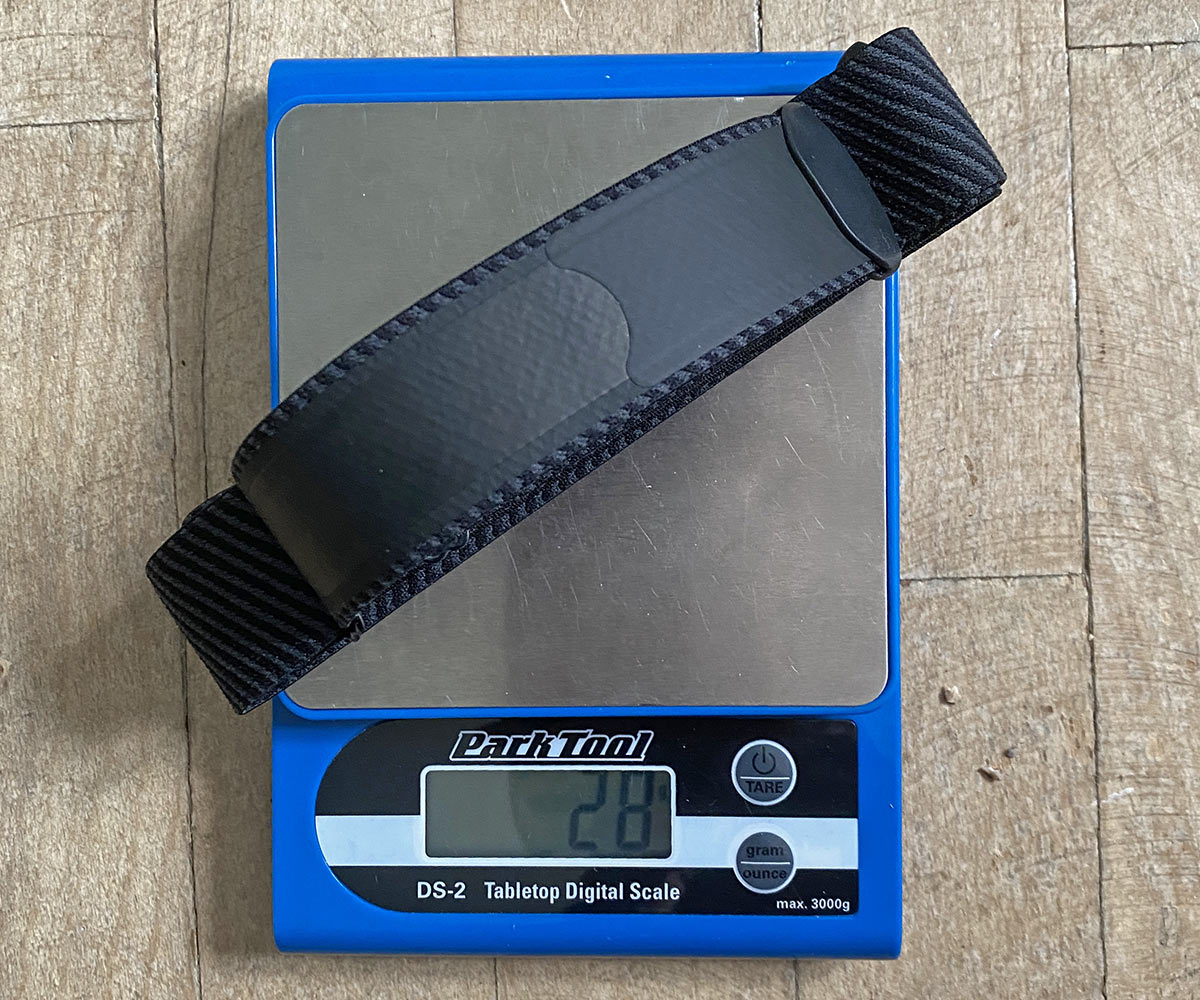 The real improvement is actually in the strap. The chest strap itself weighs just 28g, that’s a minimum 5-10g lighter than other premium straps I use with other devices. And the Kinetic strap simply feels lighter and softer against my skin. Its integrated electrode sensors are thinner and more flexible than other straps, so it feels better right when I put it on AND four sweaty hours later after a good early summer ride. 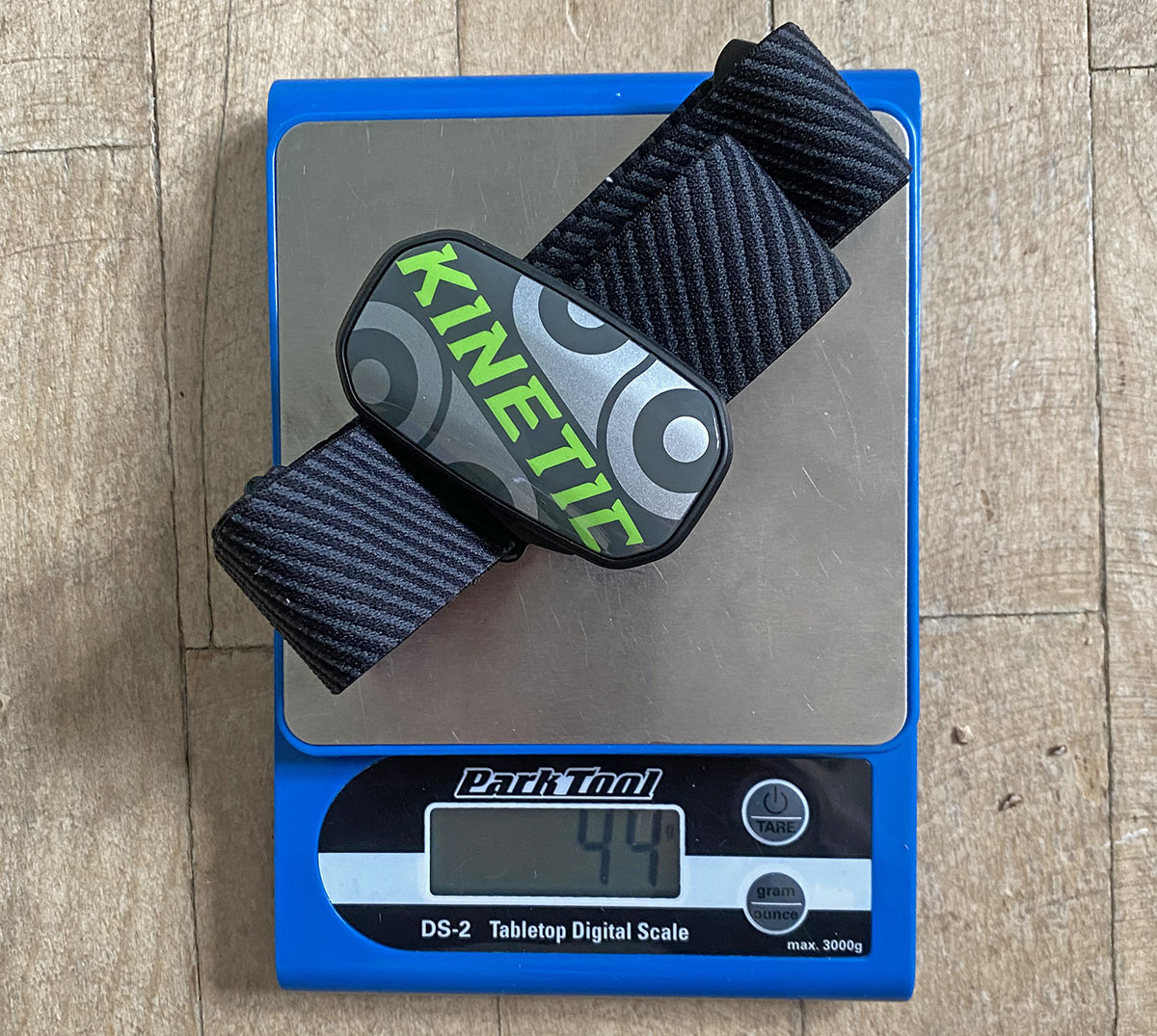 Until recently a Wahoo Tickr has been my go-to, with really no complaints. But this Kinetic inRide H1 is six grams and 12% lighter rounding up to 44g in total, and is simply more comfortable.  Plus, it’s also about a buck cheaper. 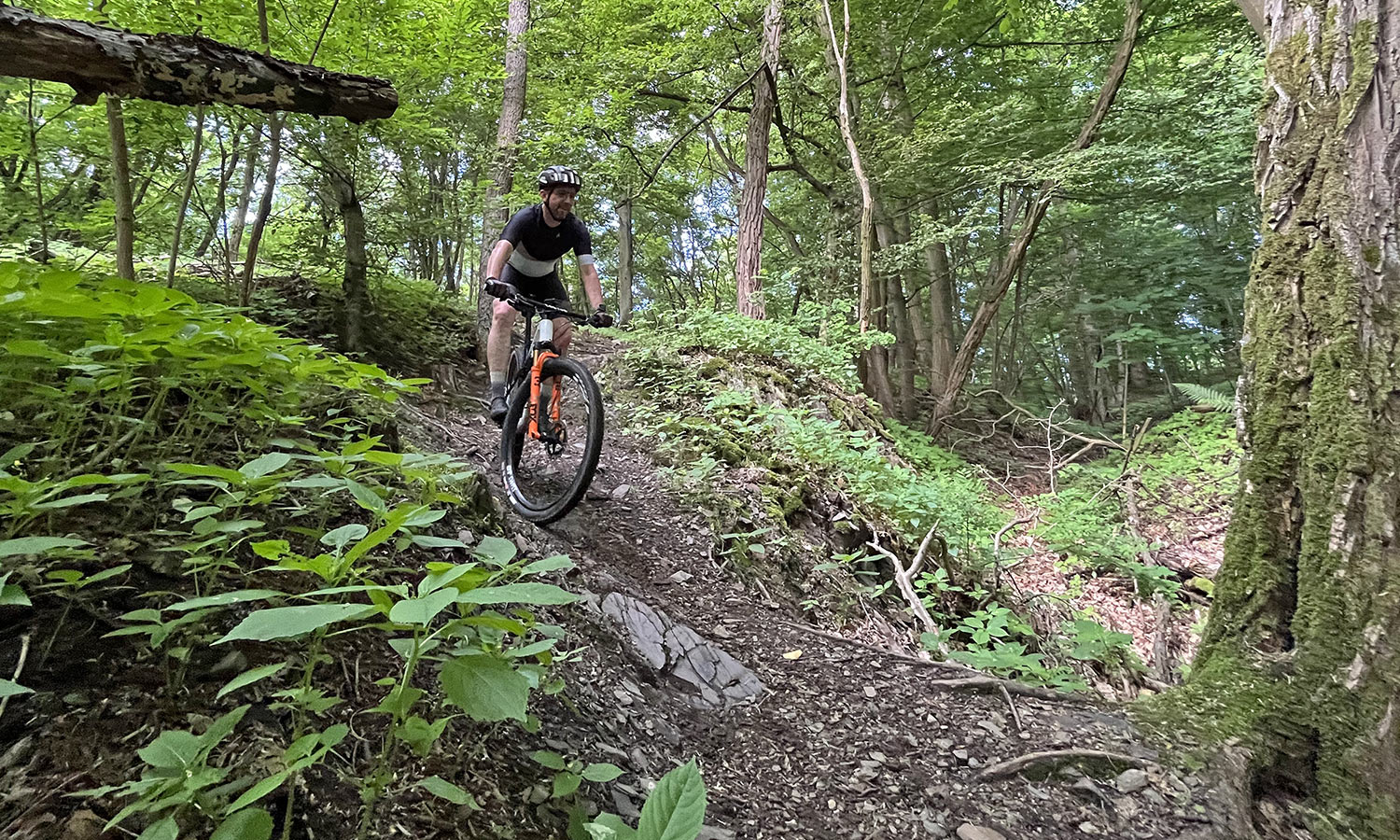 The lightweight Kinetic inRide H1 heart rate monitor sells for $49 direct from Kinetic, including sending unit, battery & strap. That’s essentially the low-end of the price range for other high-quality but basic (without onboard memory storage) chest strap heart rate monitors like those from Garmin $70, Polar $60 & Wahoo $50.

It’s hard to argue with something lightweight that simply feels good, while delivering all the functionality you ask of it at a lower price than the competition.

So far, it seems like the lightest heart rate monitor I’ve used, might just be the best one.

Had the same model from Magene.
Lasted exactly 3 months. For me a product to avoid. Just get the proven Wahoo, which is just a few bucks more expensive.

Who? Is that hrm compatible with their app only? Is this the Kinetic that once had massive market share, only to not use FE-C in their trainer?

It has the exact same design flaw as the Wahoo: the snap connection. I’ve been through almost every model on the market and went back to Garmin’s Premium Strap.

The Wahoo KICKR TICKR breaks where the snaps connect (I had two that did this within 6 months) and has reliability issues (erratic output). There are plenty of customer reviews attesting to both. Polar, CoSpa (IIRC, I had two of them), etc all have flaws. The Garmin is just pricey, and I wish it had LEDs, but it does last at least a couple of years before it goes kaput.