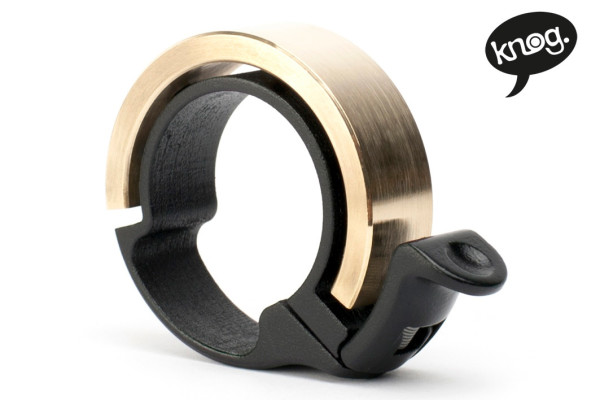 Knog just launched a Kickstarter campaign for their new low-profile Oi handlebar bell, and less than a full day in and they’ve already blown past their goal by more than 5x. That’s not really that big of a surprise. Knog is known for putting their nice design-focused touch on basic bike accessories, and crowdfunders love to support small unique design objects. The Oi seems like it won’t disappoint either; it looks like no other bar-mounted bell we’ve seen and is the kind of solution that could see it adopted on all manner of bikes. Have a listen and get a closer look after the break, plus full details, and a look at the Kickstarter deals up for grabs…


Knog’s Oi bike bell is definitely a departure from the typical dome bell, instead closely following the curve of the handlebar, and blending in with your cockpit, not screaming ‘look at my bell’. It’s something we could see putting on a road, cross, or mountain bike that gets ridden on shared-use trails where it is always nice to be able to alert slower riders or pedestrians when you roll up from behind. 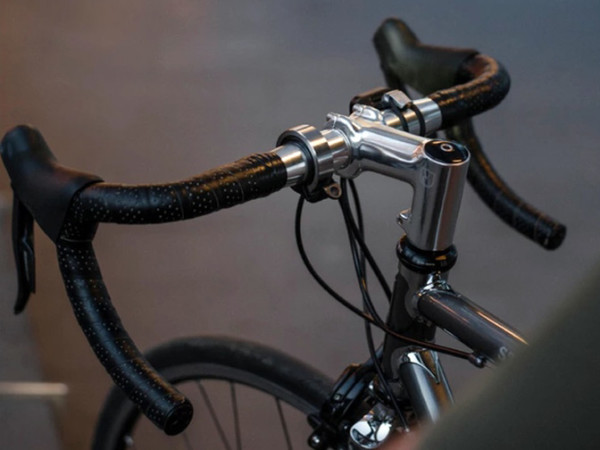 Besides the simple, clean look the Oi also has an integrated cable loop, meaning you can put it on your bar without having to worry able cable routing. And with its flexible plastic clamp, there’s no need to remove grips or bar tape.

It’s not entirely clear why Knog – well known for their small lights and colorful locks (and well-established) – went the Kickstarter route, but it seems like they weren’t entirely sure how customers would react to their fairly unconventional approach. And crowdsourcing lets them move more quickly from design to market, while also opening a direct dialogue with the early buyers. The idea seems to be paying off too based on the initial response. 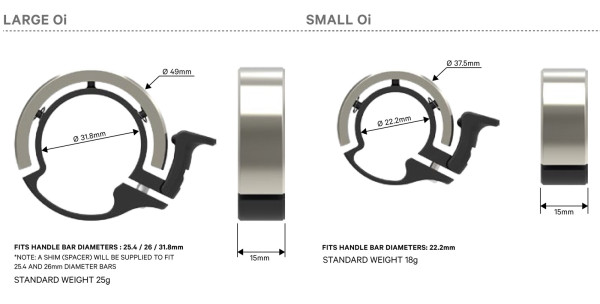 The Oi comes in 5 styles: aluminum, brass, copper, black, and the top of the range ‘treat yourself’ titanium. It also comes in two sized made to fit either 22.2mm bar diameters next to a grip, or a 31.8mm version to fit near the stem on modern bars (or with an included spacer for 25.4 or 26mm bars.) Both bells are 15mm wide, so don’t take up much real estate and won’t weigh you down at just 18g & 25g respectively for the smaller and larger diameter bells.

Only the one early bird Kickstarter special with a numbered series is already gone, but you can still get one of the first batch of bells for the same $26AUS (~$19/18€) price. Bring that up to $47AUS (~$34/32€) for the premium titanium version, with delivery for all Oi bells slated for August 2016. There are also deals if you get more than one, or if you want to custom engrave a ti bell.

“…crowdsourcing lets them move more quickly from design to market…”

…But it’s not quicker.

D*mnit, why didn’t I think of this! What a fantastic design, the profile is just perfect.

I thought that’s why we all have these stupid loud hubs. D*mn. You mean I coulda just bought a bell instead?

Another $50 bell. Our sport is in danger.

Video lets us hear which model of the bell? Different metals resonate and sound different. Wonder what ‘black’ sounds like.

Looks like the first 4 are all just anodized aluminum. I want to know what Ti vs Al sounds like though….

“…crowdsourcing lets them move more quickly from design to market…”

Not to mention screwing the IBD / less margin sharing by going consumer direct.

Or getting the word out via Kickstarter now, then going the LBS route after the publicity bump. Like SpurCycle did with their bells, which are now stocked via LBS.

To be fair, these are a LOT less expensive than the SpurCycle bell Kickstarter (and, yes, I own two of them.)

Also, I don’t know about the margins on the Oi bells, nor what it takes to build a US or EU distribution network from Australia…

Its still a Knog product, so the plastic part will break after some months, just like all the silikon straps of all their lights…

After how many month the silicone strap break on your Knog product ?
I don’t see silicone on the bell.

Older Knog products did indeed have silicone straps break apart, and their headlights generally are too heavy to remain in place. Silicone just doesn’t have enough grip. You can get around this by taking some CatEye straps and hacking those onto the Knog lights. If nothing else, they are designed quite well and look great on a bike.

@bb_nl Any comment on the product? Nope? This about a bell, not crowdsourcing business models and lead times.

These look awesome! Much better than the flimsy stamped aluminum bells. The width is great for road bars.

Actually the article is about both crowdsourcing and a new bell. No need to get angry regarding comments about what is clearly stated in the article title and content.
Reading comprehension 101? Have you heard about it?

I did make a comment about the product. Twice even. If you can’t read, that’s your problem, not mine 😉

Why does an established company need to use Kickstarter for this…

The brown one goes ‘dunnnnnng!’

quite big, do not really see improvement to other options out there (for having something discreet on the handlebar …. but perhaps this is not the intention for such a “design” piece)

Someone do a *Ringer* version of this please! Or a remote/electronic version to a ringer! I don’t like the ding bells, since the bell isn’t distinctive enough to announce that there’s a bike behind.

I got an idea for an even cleaner looking design. Leave this bell at the bike shop and just yell, “on your left” as you come up and eventually pass someone in front of you. Think about it. You save 50 Aussie bucks and your handlebar looks to clean and uncluttered.

A bell has no emotion. Sometimes when I pushing it, “on your left” comes out pretty harsh and I think people take it offensively. And as other have mentioned, “on your left” typically causes people to look and move left.
And are you really concerned what people choose to spend their money on?

Spot on! A bell, is not barking out an order, and because, it’s an unnatural sound is picked up much sooner, and runners or walkers, have more time to move. I think light weight quality bells, will help to reduce conflicts on the trails and my down hill times are faster, as people hear my bell and move out of the way. You want to keep trails?, use bells?”

Finally, a bell that will look at home on a modern bike. And doesn’t take up much real estate on the bars either.

Love the design. Finally a bell that won’t look odd on a drop bar bike.

Just say “FIRE” loudly and people always look. There, I just saved you $20 that a multimillion dollar company is basically stealing from people who can’t think for themselves, everything has to be bought.

I like how saying, “On your left!” makes a large segment of the walking population immediately jump to their left.

Where a well-timed bell tends to wake pedestrians out of their own little worlds.

My city requires bells as a legal piece of equipment. Cops on weekends camp out the bike paths to ticket anyone without a bell.

In Australia knog screwed the Aussie bike shops and even the Aussie distributor. They went behind their backs and put their product in department stores and big box discounters. The Kickstarter is just another way to screw the Aussie industry. You won’t find it in many bike shops here because of this.

The bell looks pretty kneat. I hate that Kickstarter is being used and IMO abused by established companies to shift all development costs directly onto the consumer. This making it completely risk free for a company that could otherwise afford to bring the product to market under more traditional methods.

I understand the capitalistic implications here but I thought the point of kickstarter was to promote entrepreneurship and mitigate risk for really small and developing firms. A way for the little guy to level the playing field so to speak who don’t already have an established brand, marketing department, or product development team.

If you have an entire product line of fully functioning prototype models, the are factories just waiting for the green-light and it’s just about the money to produce them. In my opinion you are clearly abusing the spirit of kickstarter.

I’ve stopped my death metal for this. Bring me back 11 seconds of my life.

Hard to know if this bell is loud enough for use in traffic. I like it appears to work with modern “over-size” handlebar diameters (i.e.m 31.8 mm). Main problem with other bells is the ability to ring the bell without having the sound muffled by your gloved hand. This design does not appear to solve that problem – it would need a longer or angled ring lever. The space in the clamp for cables is awesome – they’re always in the way of mounting a bell.

I just received my Oi bells recently. While the unit looks sleek, the loudness is quite disappointing. Not only it too politely soft, but the sound decays very quickly. In comparison, my Spurcycle bell sounds WAY louder and has a sustained decay.

I think it boils down do the difference in design. 1. Metal arc (Oi) versus a metal dome (Spurcycle). 2. Flimsy small plastic trigger with a tiny hammer (Oi) versus a longer stiffer metal trigger with a substantially bigger hammer (Spurcycle). Also, the Spurcycle bell allows for better volume control – from a gentle ding on a quiet trail to a much louder ding in noisy environments.

Looks wise, it think it is a toss up – Spurcycle trades the “ring over the handlebar” look of the Oi with a “small dome in front of handlebar”.

Wow, more discussion on a bell than the current presidential administration.