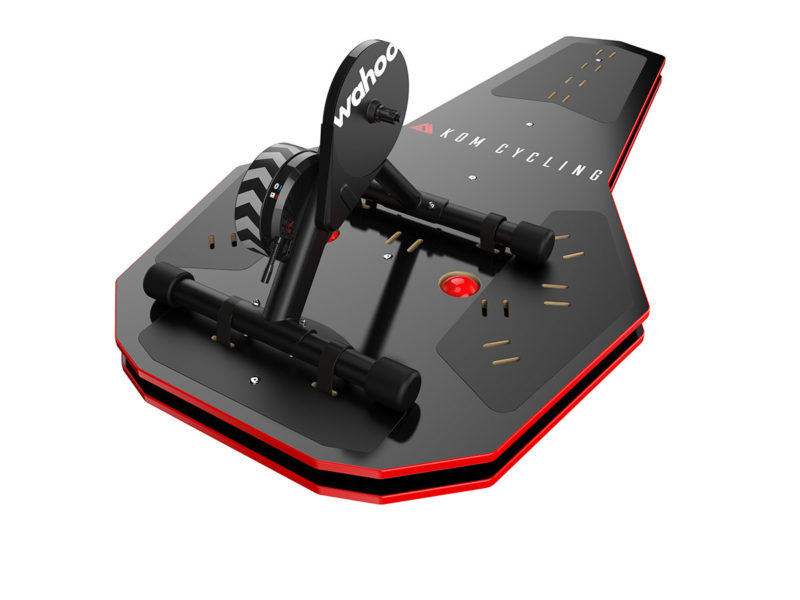 Better known for their Garmin and Wahoo mounts, KOM Cycling have entered the pain cave, developing the Rocker Plate to decrease discomfort during turbo training sessions. A 13° total side-to-side tilt is said to allow for more natural movement, akin to how you might experience riding on the road. At $449.99, the KOM Rocker Plate is over half the price of some of its competitors. Thus, we reckon it’s worth a closer look. 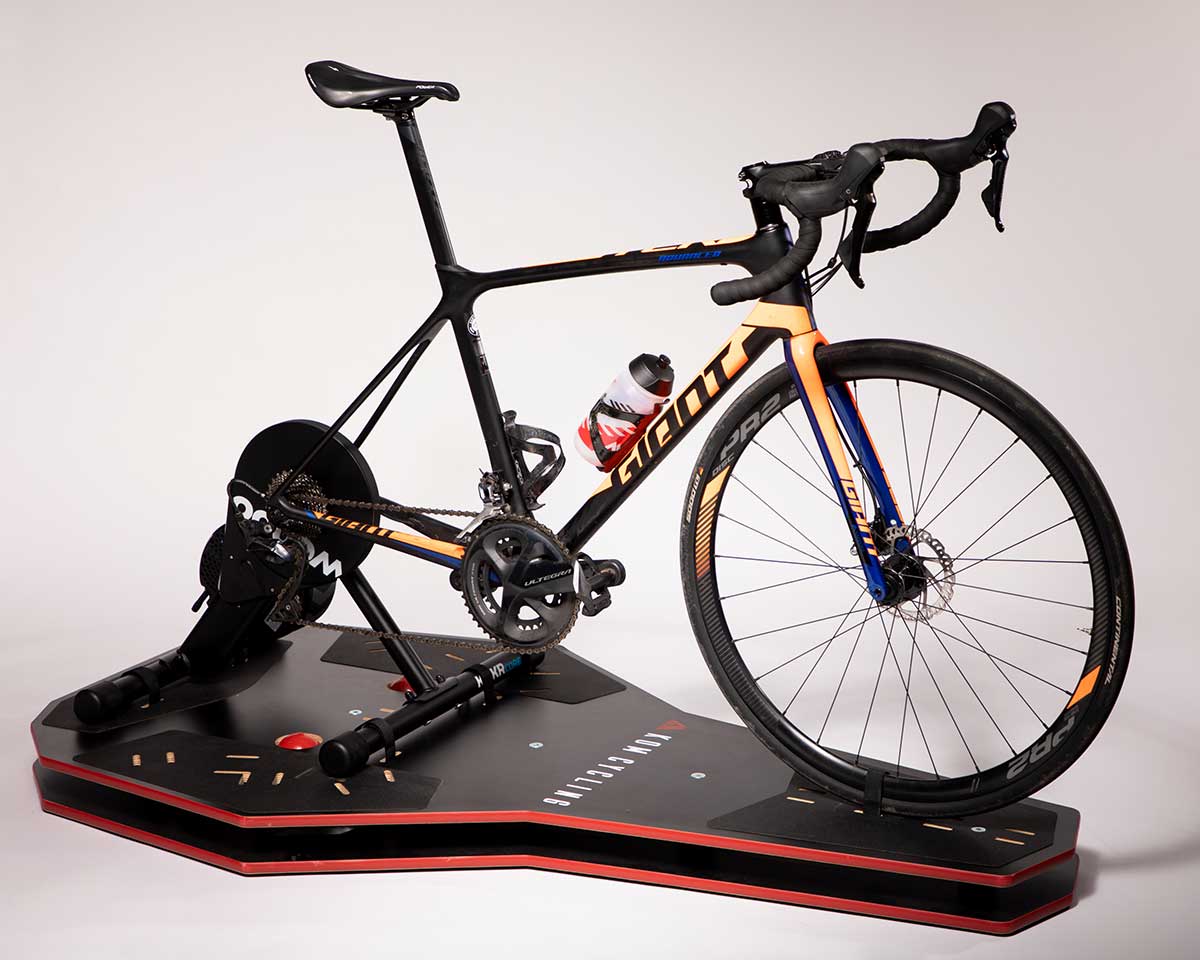 KOM Cycling claim that the horizontal movement offered by the Rocker Plate decreases static pressure to your joints, creating a more comfortable immersive indoor cycling
experience. If you are comfortable for longer you may find you have the ability to increase the duration of your turbo training sessions.

The Rocker Plate consists of two Lauan plywood boards connected by rubber isolation mounts. The isolation mounts are often used in industry to damp vibrations generated by motors, reducing the amount transferred to a vehicle chassis (and the humans within it). 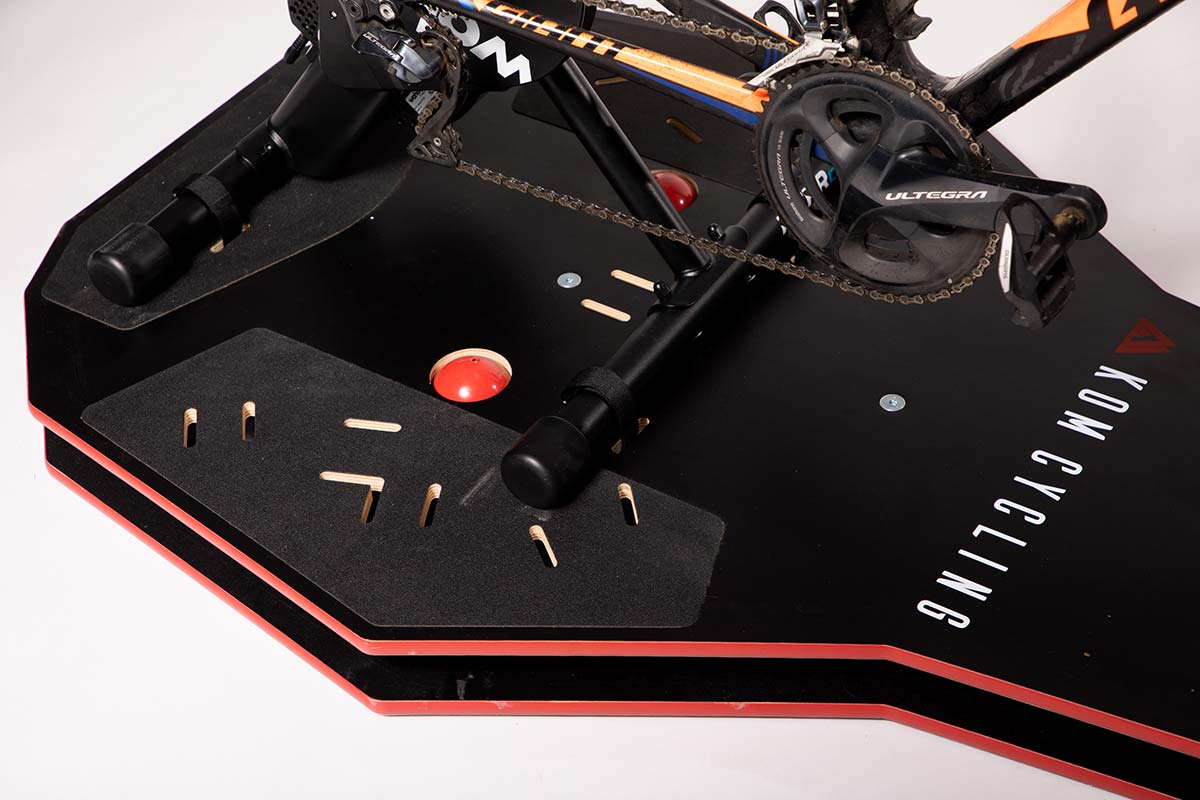 Looking at the Wahoo KICKR smart trainer, you may well be thinking that the AXIS feet upgrade would be a much cheaper option at just $79.99. However, it is worth noting that these offer just 5° of tuneable sideways movement.

How do the isolation mounts work?

These thick rubber pucks have threaded interfaces on both sides that act like a flexible beam between the plates, allow for a rocking motion when they flex. KOM Cycling say the isolation mounts provide a nominal amount of spring force to help return the plates to level. 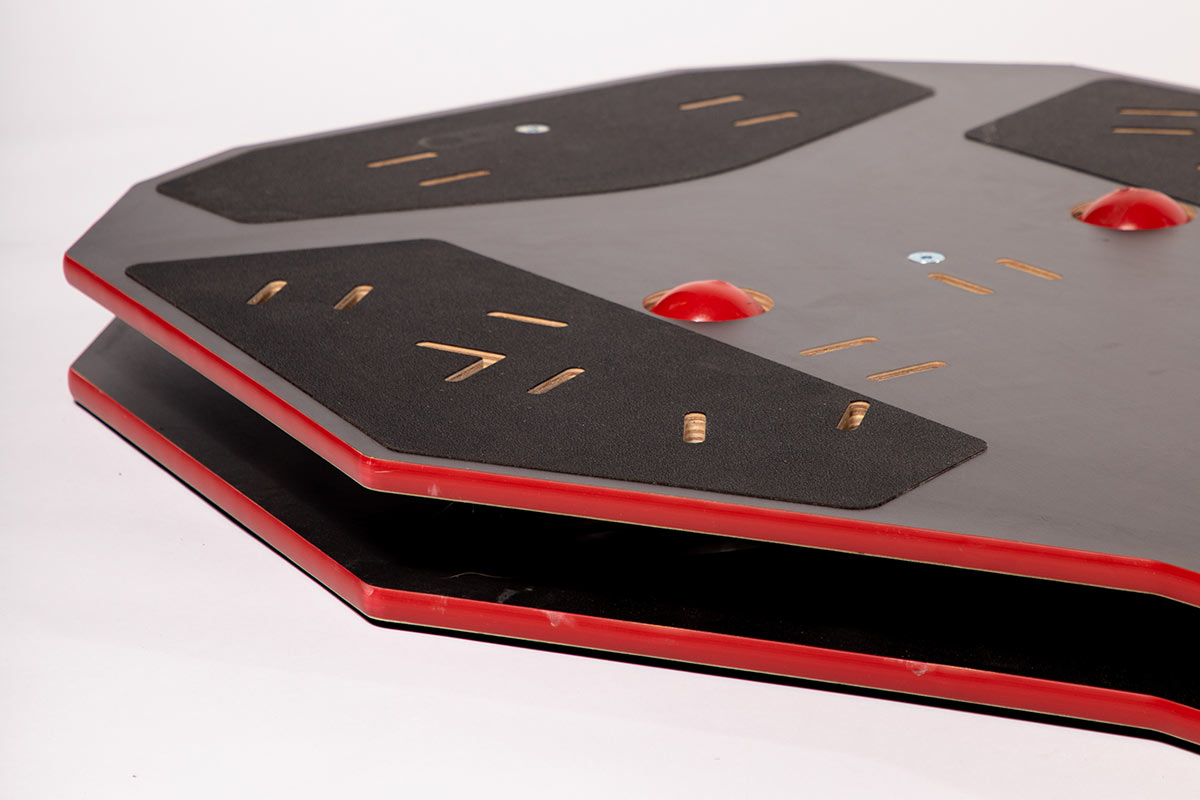 Inflatable balls also sit between the plates on both sides to help return them parallel with one another. The pressure in these balls can be adjusted to fine tune the ride feel. The lower the pressure, the more you’ll have to engage your core to move the bike underneath you.

Other rocking trainer platforms use a metal rod that runs along the length of the rocker plate that pivots on pillow bearings. KOM Cycling say they preferred the simplicity, reduced weight and ease of maintenance offered by the isolation mounts. 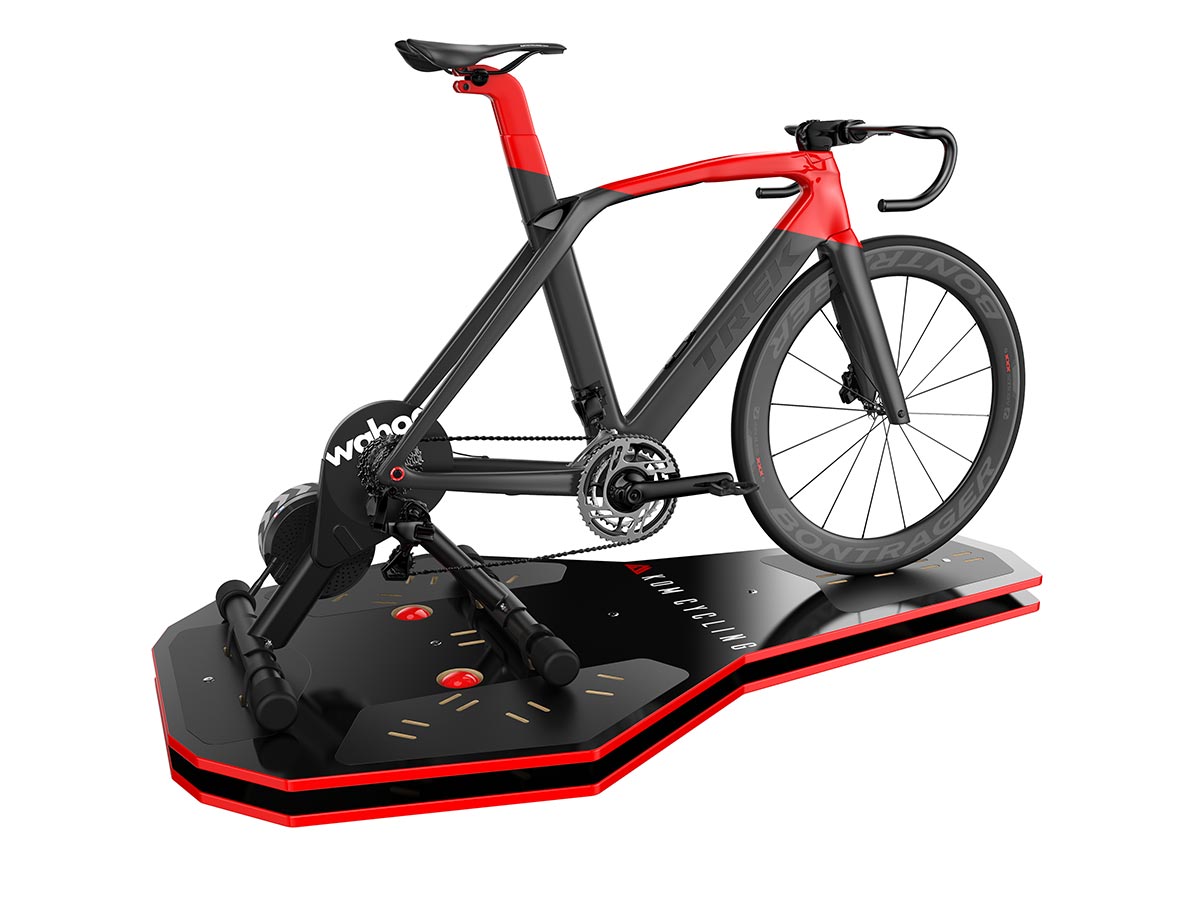 The KOM Rocker Plate weighs a claimed 42lbs, with the following platform dimensions:

It has a maximum weight capacity of 425lbs. Compatibility should only be limited by the width of the platform itself. KOM Cycling confirm it works with indoor trainers from Saris, Wahoo, Tacx and Elite. 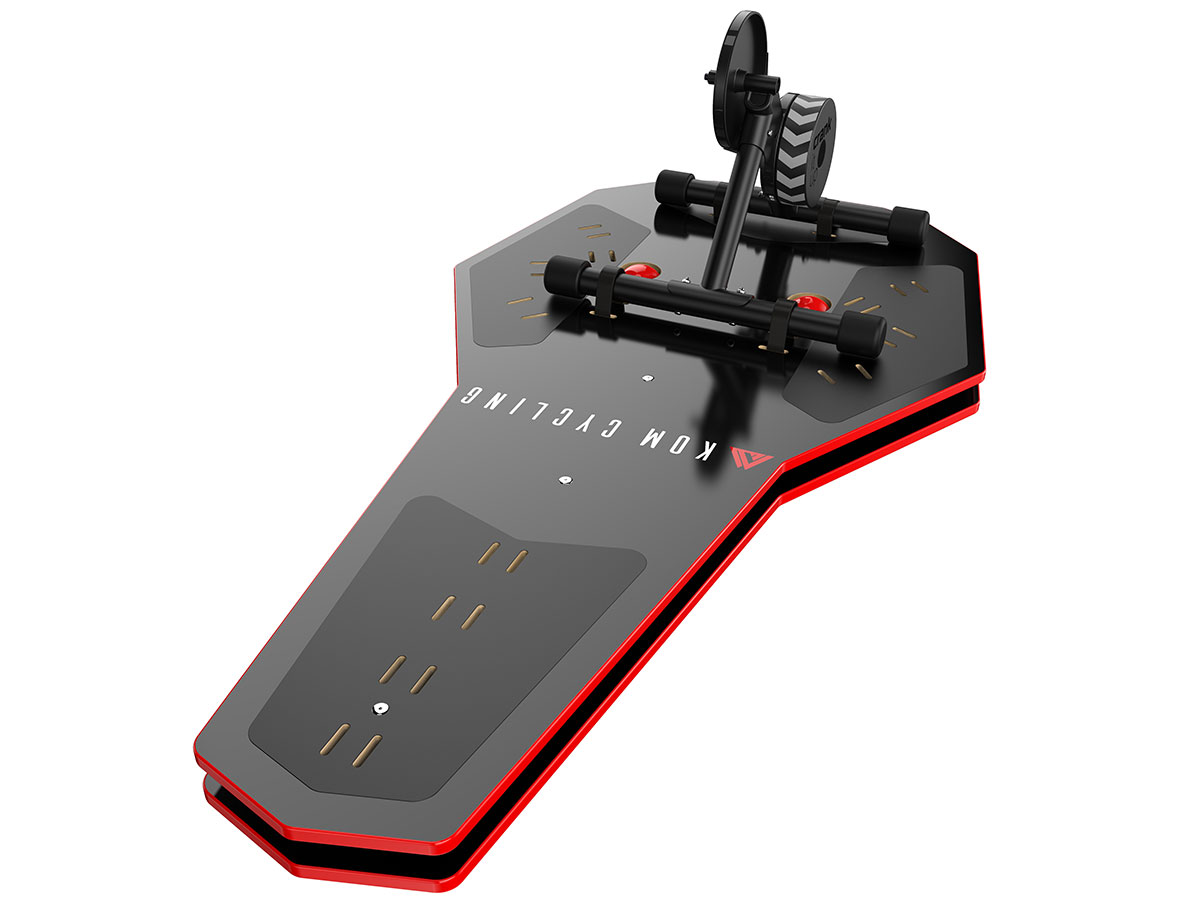 The KOM Rocker Plate is shipping from the US as of January 14th. Pre-order one now for $449.99, either direct or from Amazon (with free shipping). Each Rocker Plate comes with five velcro straps, two inflatable balls, a ball inflator pump and a level tool for installation.

I think the side angle comparison needs correcting. 13deg. Sounds like the total left and right tilt if you add both sides from the neutral position. The Saris MP1 leans 6 deg to each side so if you were to compare that it would be 13deg vs 12deg.

Thanks for catching that, Dustin. You are correct, it tilts 13 degrees in total.

I’ll buy two whole beers and a sandwich to whoever comes out with a rocker plate that mimics real world riding instead of tilting the wrong direction.

Great to see yet another option in the world of rocker plates. For clarity, this KOM Cycling rocker plate is a re-branded product from the RideNow company. They made their original plate quite a while ago but didn’t seem to sell many beyond their local areas.

It was then marketed under LifeLine name and sold by Wiggle and Chain Reaction Cycles in the UK. They even ran a sale a while back that lead to the LifeLine rocker being purchased around the world for a great price.

This KOM Cycling version gets different color setup, but appears to retain the same function as the RideNow and LifeLine versions.

These have reviewed well with the notable exception that some riders (especially those new to rocker plates) find the inner location for the leveling spring balls to be too narrow, which leads to a very loose feel. We’ve recommended that those riders move the balls further from the pivot and towards the edge of the plate, if they need more support. Other than that, these seem to be good for a vibration mount design.

I’m happy to answer any questions about rockers here or in my Rocker Plate FB group.

Has anyone used a rocker + Wahoo’s AXIS feet? JW if the side-to-side is compounded…

This will be similar to using a Tacx Neo trainer on a rocker plate. The Neo has “flex” built in and it is comparable to the Axis feet on the Kickr. In the case of the Neo, they are stiff enough (like the Axis feet) that the Neo frame doesn’t move much once mounted on a rocker.

The only exception is when someone uses very stiff leveling spring settings on the rocker, or a “simple rocker” like pure foam blocks and such. Those devices with firm and minimal movement may still activate the trainer motion in the Axis feet or Neo frame.

I made my own rocker plate, which is nearly identical to this one. Once the pressure is adjusted properly, it works just as it would in real life. If the pressure is too high, then it works the opposite.

I was going to post the same thing. A sheet of plywood, a few tennis balls, and an afternoon.

can you put a wahoo climb on these or is that just too dangerous?

Dropping just shy of 5 bills on something like this is steep, even if it’s less than others on the market. That being said, I’m super impressed with mine. I honestly didn’t expect such an instant improvement in comfort and reduced joint fatigue.

One issue has been getting the air volumes right, as my Saris H3 has more weight to one side from how the flywheel is positioned. So there’s some trial and error but I’ve been pretty darn happy.

I don’t have the tools for a homemade/ghetto setup, but if that’s as effective, awesome – although you’d have to experiment with number and placement of the tennis balls, where something like this you can easily adjust the air volume. Either way, for me some sort of cushion/rocker has made a huge difference in making indoor training less unbearable.

Os i compatible with Elite Drivo 2?