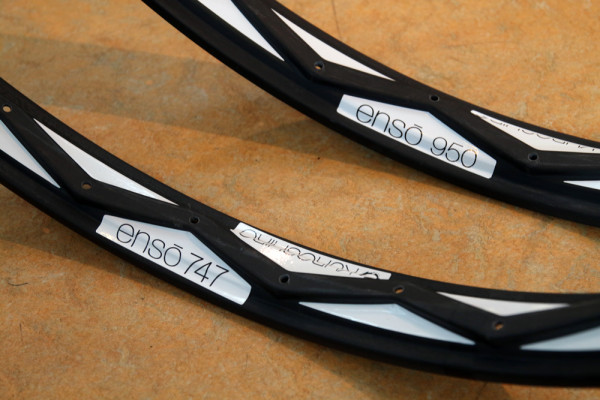 At this point, the introduction of the Kuroshiro enso 747 should probably come as no surprise. Almost exactly one year ago, Mauro Bertolloto came to us with the introduction of what he felt was a revolutionary product, an exceptionally light carbon rim for fat bikes with some interesting tech. Combining forces with Alchemist composites, the Italian duo created a carbon fat bike rim that claimed to be the lightest and stiffest rim on the market, yet one that did not need sealing tape to run tubeless.

It wasn’t long before Kuroshiro were onto their next project, launching the enso 950. Applying many of the same design features to the world of 29+, the 950 had one key difference. Due to the added size of the rim, the original 685 design didn’t provide the stiffness needed for aggressive riding. The fix was to change the center spline into the new Alpha Ridge which serves as a box structure filled with a special closed cell foam that would increase stiffness without adding much at all in terms of weight.

After the development of the 950 was completed, all that was left for the new 747 size was to make it a bit smaller and dial it in for what Mauro sees as the future of the 27.5+ standard… 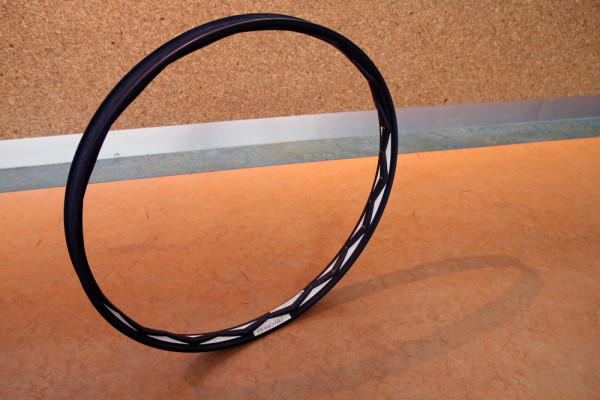 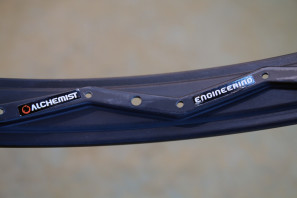 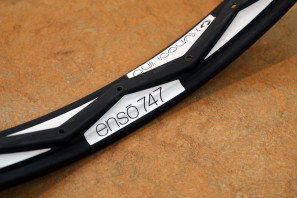 Given the price of the original enso 685 and 950 rims, you would imagine that they would be out of the reach of most riders, yet they have a three month waiting list. That’s with doubling their production as well… to a whopping ~6 rims per week. Both rims are now delivering in Europe with U.S. delivery on the way.

As far as the enso 747, the rim above is v.7 with the final production v.8 version starting on March 31st for Italy, Switzerland, UK, Finland, Austria, Germany, and Sweden. 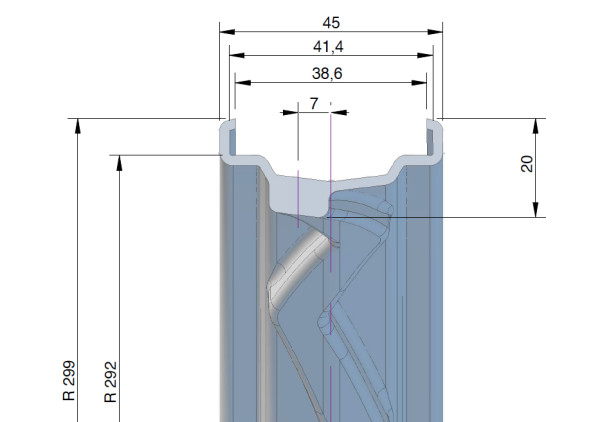 Slightly different than the name would imply, the 747 rims measure in at 45mm wide externally, and 38.6mm internally at the bead hooks. When asked about the inclusion of the bead hooks when many rims seem to be moving towards hookless, Mauro told us that with Alchemist’s proprietary process for making an extremely strong and dense hook structure, there is no reason to remove it. In his opinion, eliminating the hook is more about making the production easier and less expensive, but doesn’t result in any improved performance as long as the hook is constructed properly.

This conversation also steered into discussion of rim design as a whole with Mauro stating that he thinks single wall (or single wall with reinforcements like the 950 and 747) are the future of bicycle rim design. If you look at most vehicles – cars, motorcycles, etc, most use a single wall construction. With the advancement of composites and wide rim design, Kuroshiro is joining a few other companies in pursuing this idea. 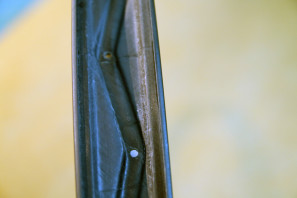 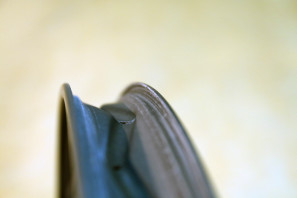 Calling it a hybrid/composite polymer rim, the Alpha-Ridge box section still provides the same Spline interface for the spoke holes as the original 685 rim. It’s this ridge of carbon that connects all the spokes which allows for high spoke tension that makes tubeless use without tape or washers possible.

Inside the Alpha-Ridge is a closed cell cross linked polymer called Airex c70.90 that offers additional stiffness with negligible weight. Since the foam is closed cell, Mauro says it will not absorb moisture and is the same material found inside airplane wings, helicopter rotors, and racing boat hulls. 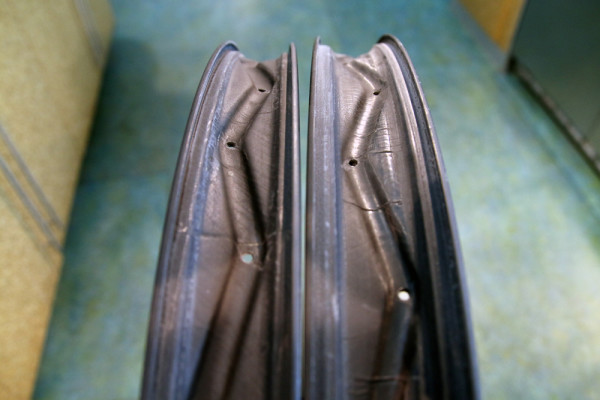 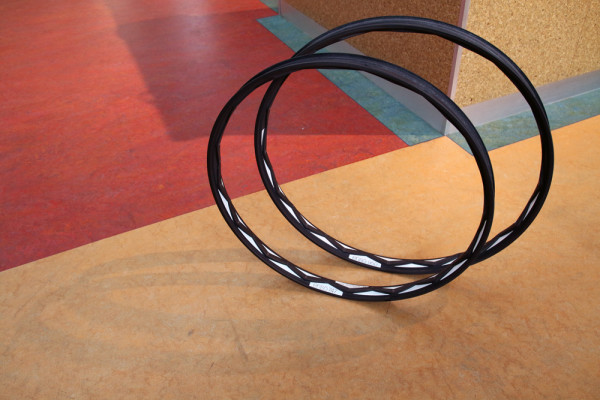 The result is a rim that comes in under 350g and doesn’t need rim tape or nipple washers, which help lower the overall wheelset weight further. Built with a lightweight set of fat bike hubs, spokes, and alloy nipples, Mauro claims a wheelset can be built as low as 1390g.

Eventually available as a rim only or as a complete wheelset, enso 747s will be offered built to American Classic 150 and 225 hubs with Sapim Superspokes. Price is TBD. Complete wheels will also have the option of running a Boost 148 rear hub standard which hints to where Mauro thinks the 747s will be used. The choice to build the rims at 45mm wide was purposeful as the size will allow the wheels to be used in more 29″ frames with a 27.5″ mountain bike tire but also for full on 27.5+ tires on applicable frames. Rim price is set at 849€ with the U.S. pricing also TBD. While most of the sales have been focused on Europe, Mauro plans to ramp up direct sales to the U.S. starting next year.

kudos for taking the plunge…..cool looking, great technology…..I hope these wheels meet and exceed your expectations and sales forecasting….wish I had the money to buy a fat bike and to buy these hoops………..

Don’t need a fat bike to run B+ actually. Many existing 29er and 650b frames will fit believe it or not. Forks are coming as well right around Sea Otter.

Hi Steve!
The goal with the 747 is having a wide rim, but not too wide to have issues using tires now in production.
We developed this rim in more than one year and during the development we decided to reduce the width. Looking at the name you can guess what have been the ‘genesis’ of the product. This rim started as 747 and keep the original project name, but couple of revisions ago we decided to reduce the external width to 45 mm instead to 47 mm.

The internal width actually is not 38.6 but 41.4 since this is the width used by the kevlar bead.
38.6 is the width at the end of the hooks or, as we call them, the bumpers.

To absorb impact is actually the main reason why we decided to keep the hook that in there rims has the function to have a wider area in case of impact. The contact area is actually bigger and the structure permits also a slight flexion absorbing shocks that can destroy an ‘unprotected’ rim wall. We have always to remember that composite is not alloy and a good design can implement in the project an ‘elasticity’ that with alloy you simply cannot have.

The only option to avoid a stronger impact resistance is having a thicker wall… but this is growing the weight and our structure looks more efficient to us.

At the end what you noted is absolutely correct: we designed this rim to fit both in 27.5 and B+ standards leaving to the customer the possibility to upgrade from 27.5 standard to B+moving to a new the frame but without having to buy new wheels.. that in this case are unfortunately not cheap. We think that an internal width of 41.4 mm is a good compromise and will fit pretty well also future tires designed for B+ format.

@mauro- there ya go with your creative measurements again.

“The internal width actually is not 38.6 but 41.4 since this is the width used by the kevlar bead.”

This company is just picking and choosing seemingly random reasons how they want to justify their design. “Singlewall because motorcycles and cars use them”. But motorcycles and cars don’t use hooked rims…. Also, why does it matter where the kevlar bead sits (at 41.4mm) when the tire is pinched to 38.6mm by the hook? It seems like you just throw more information at us than necessary in a poor attempt to justify a wonky design. Also, as a side note, the rim hook doesn’t at all look like it would widen an impact area. In fact, it looks alot sharper than a hookless rim edge would be in a rock strike.

@Thesteve4761 – There is a diagram above that shows all the dimensions. You can argue what width you want to label this rim as and Mauro is arguing you should claim the width as where the bead of the tire will sit. Seems reasonable.

It’s interesting they are going with a hooked rim where other companies are claiming hookless makes a stronger rim (specialized roval rims made the switch last year with this claim for example). Not sure who to believe … different rims different results I guess.

@mauro & @Thesteve4761 as the “bumper” or “hooks” is what gives the tire the shape it is the important width number, and also the number used by most of the industry to talk about internal width of a rim.

It looks like a very nice rim but I am not sure you will get the true 27.5+ results like you would on a 45mm internal rim. But it makes for a very wide 27.5 rim.

Ah. Bike Rumor. My favorite source of armchair engineers. I hear that Boeing hires directly from the forums here.

@ Mauro there will always be people who want to pick faults, that’s how they entertain themselves. Personally i think these are the best looking rims out there. Any time you have a spare test set i would love to ride the snot out of them all summer. I ride an Air 9 carbon dressed up single speed with a DT Swiss fork so these 27.5 + should fit. I run 34T (rotor Q ring) x 16T, i don’t like spinning out and that way my geared mates get a beating on the way down as well.
Cheers DJ

Grain of salt – 02/24/15 – 12:39pm
Ah. Bike Rumor. My favorite source of armchair engineers. I hear that Boeing hires directly from the forums here.

I’ll wait until you release a hookless (bumperless) version before I buy.

Car rims are single walled because they don’t use threaded spokes.