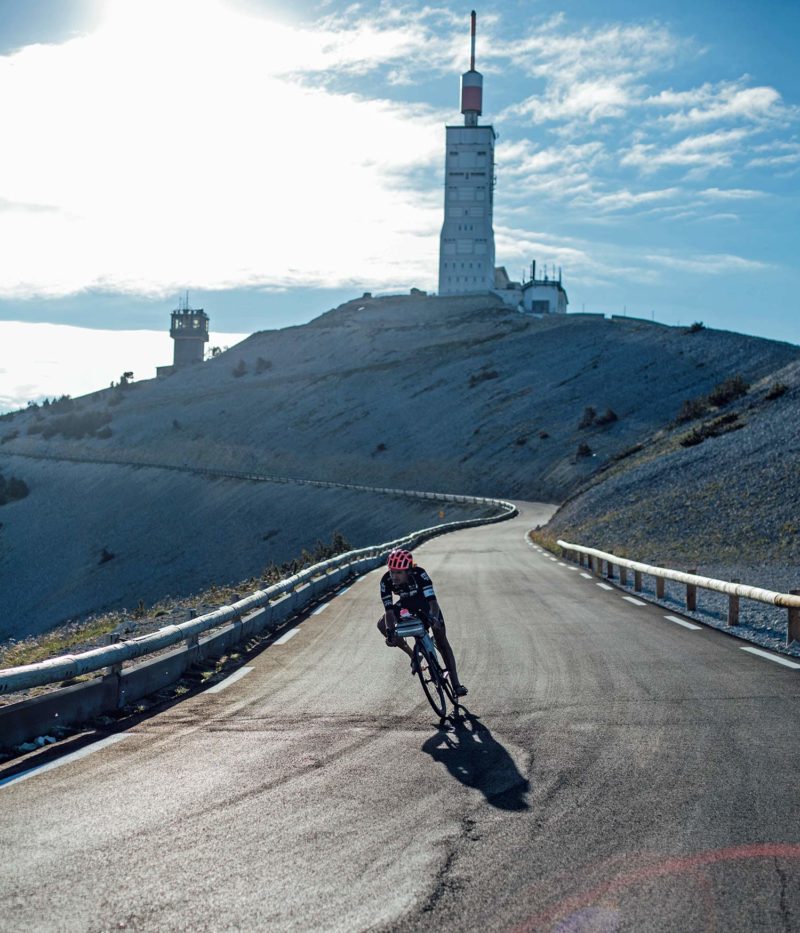 While the racing inside the actual peloton of the Tour de France has been especially exciting this year – and we’ve even spotted a number of new prototypes – it’s truly Lachlan Morton’s superhuman, self-supported bikepacking Alt Tour that has held my attention every day.

Inspired by the crazy brutal feats of the earliest runnings of le Tour, Lachlan started the same day as the 23 teams in the biggest road race in the world, setting out to ride all 21 official stages, plus the sometimes long transfers between each stage, all on his own, carrying his gear and stopping for food & drink along the way, and camping each night out.

His goal was to beat the peloton back to Paris, and to raise money for World Bicycle Relief along the way. 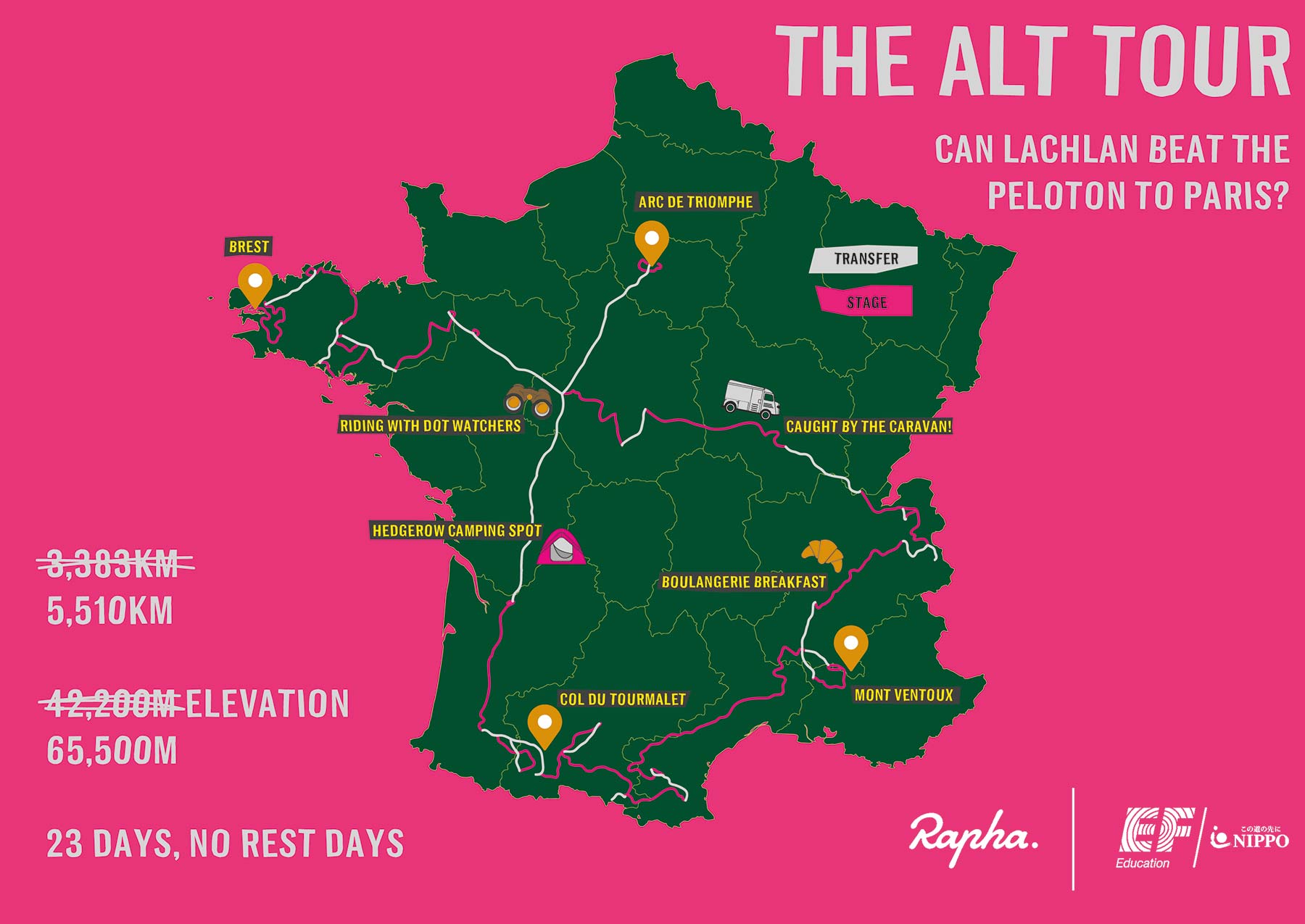 No outside support, carrying everything he needs, and stopping only to rest, this really has become to longest, most brutal one-man bikepacking race we’ve seen. 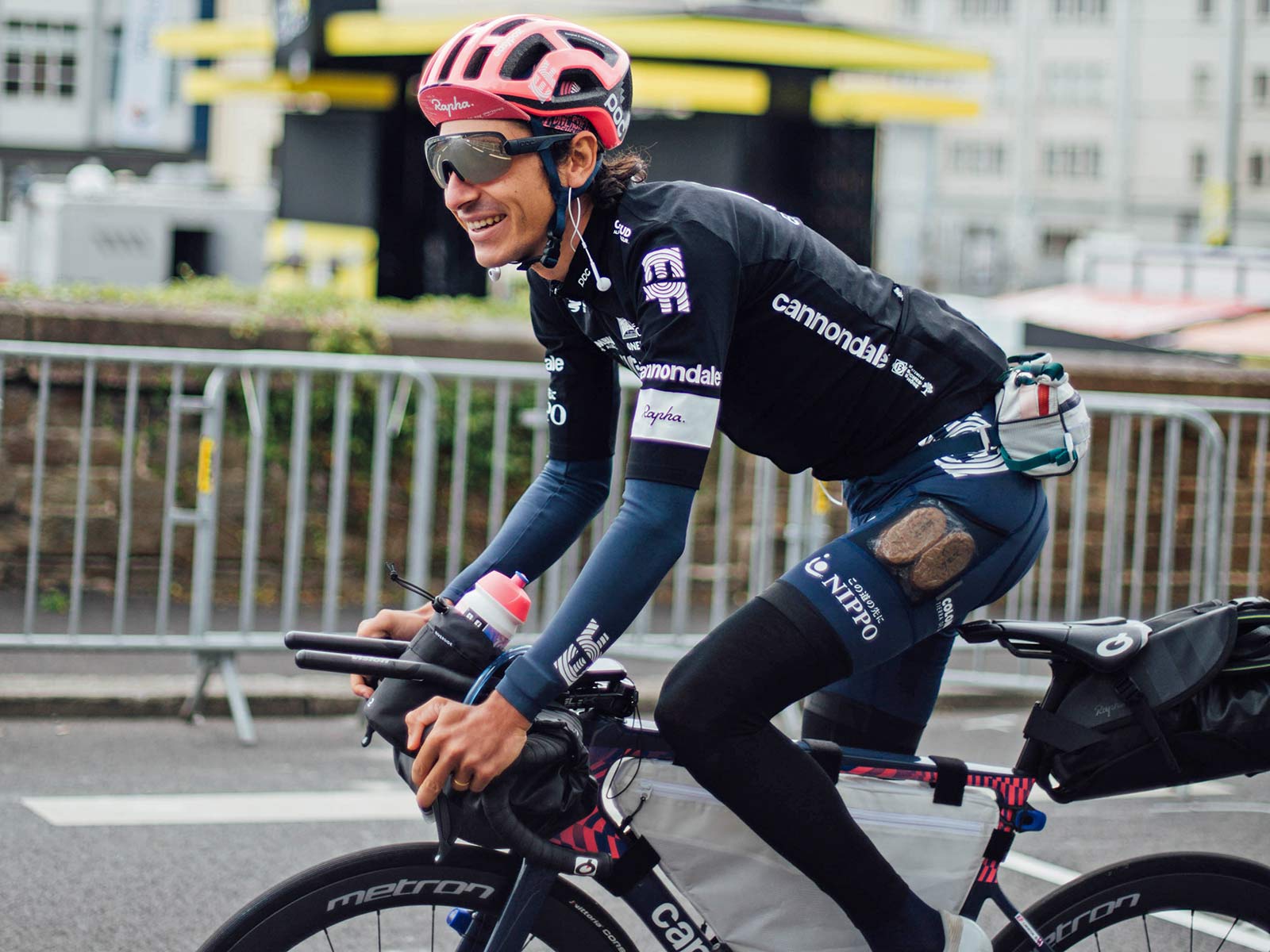 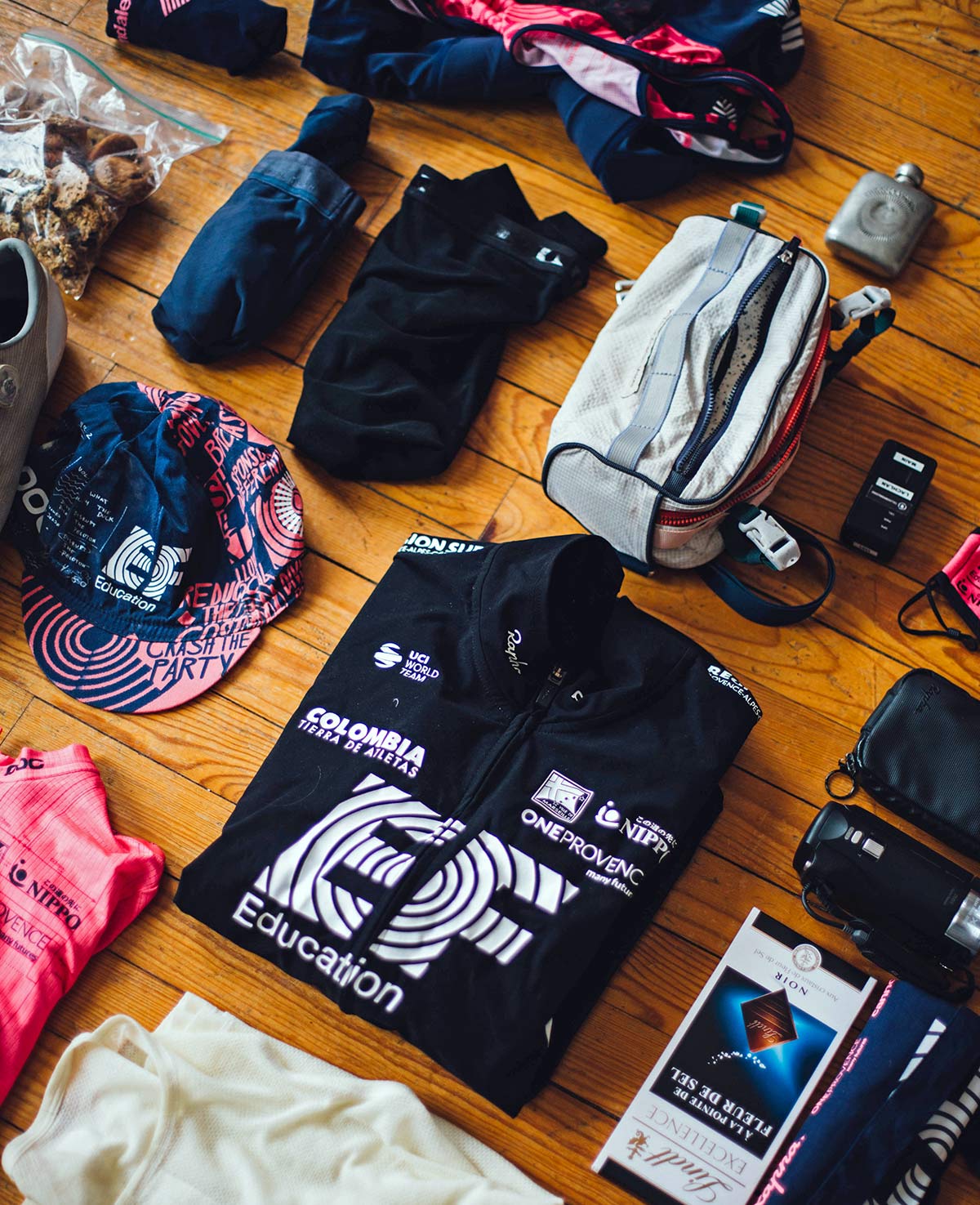 How’s that compare to what the peloton will ride in the actual Tour de France? 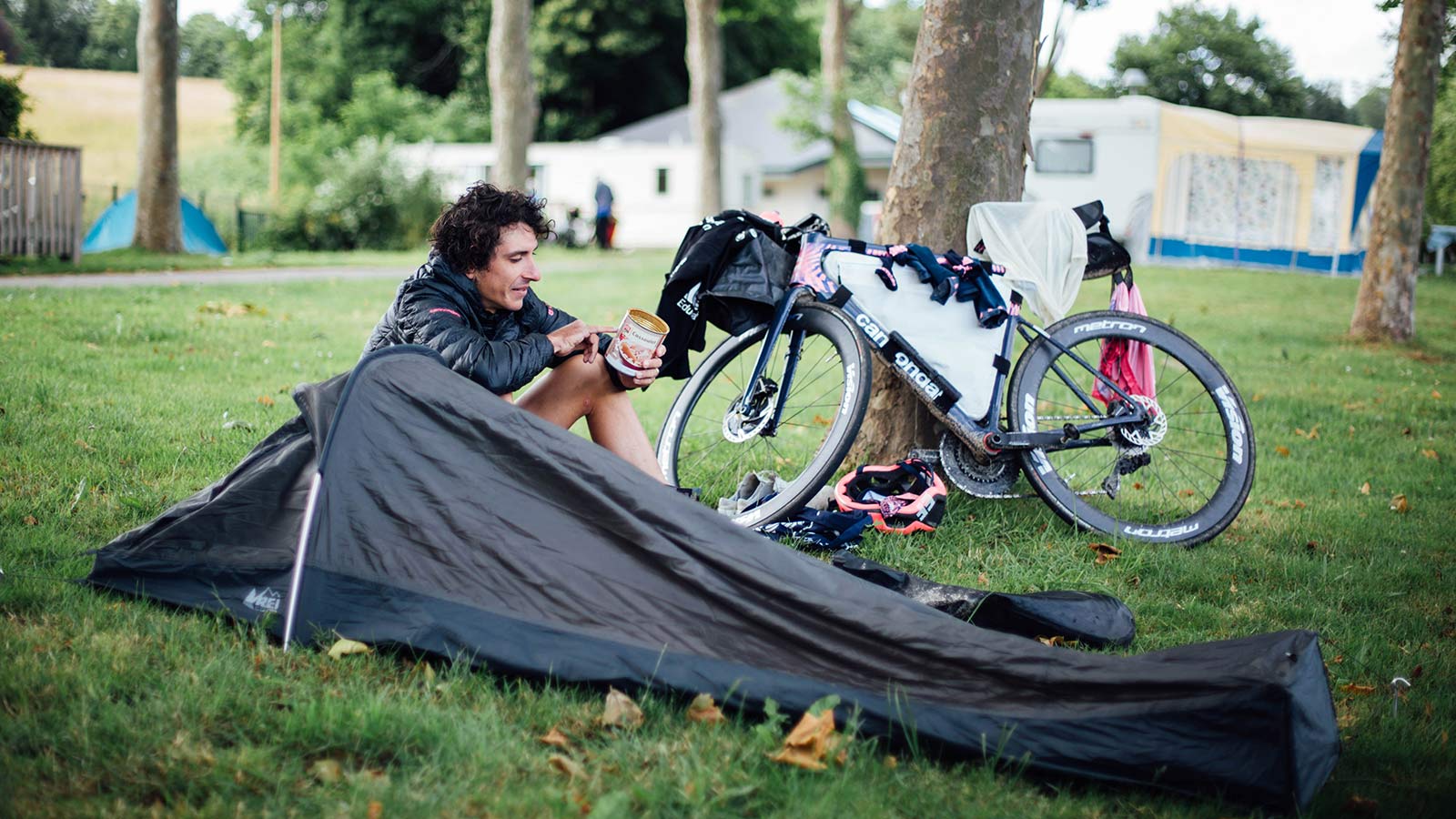 The 23 pro teams in the Tour, consisting of eight riders each, will race a course of 3,383km with a total of 42,200m of climbing. They’ll also do it over 21 days of racing, with two rest days in between before they finish this coming weekend. 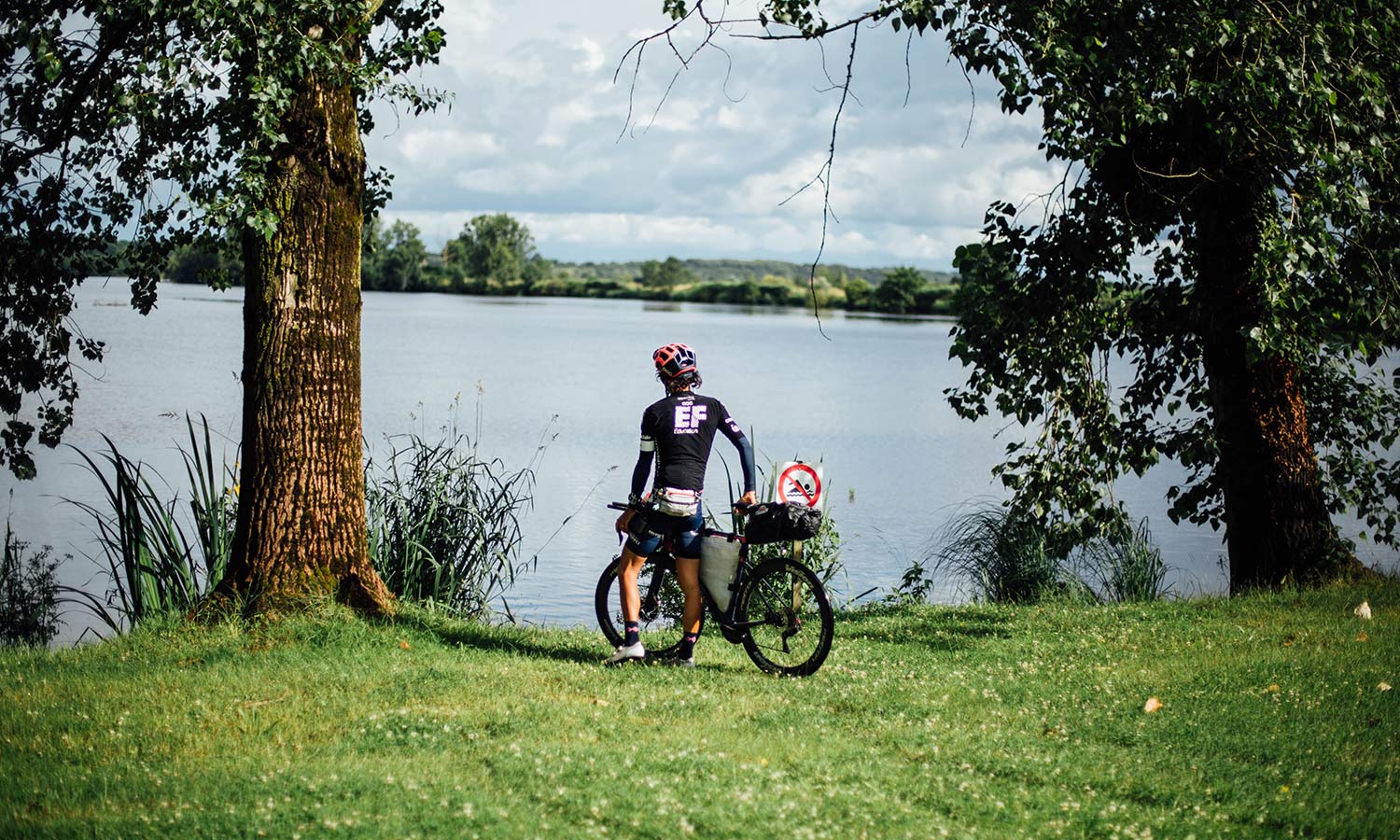 Also, just to remind you how hard that ‘normal’ race is, out of those 184 riders who started June 26th in Brest, 37 have already withdrawn from the race, whether resulting from crashes, fatigue, or just not making the daily timecut. 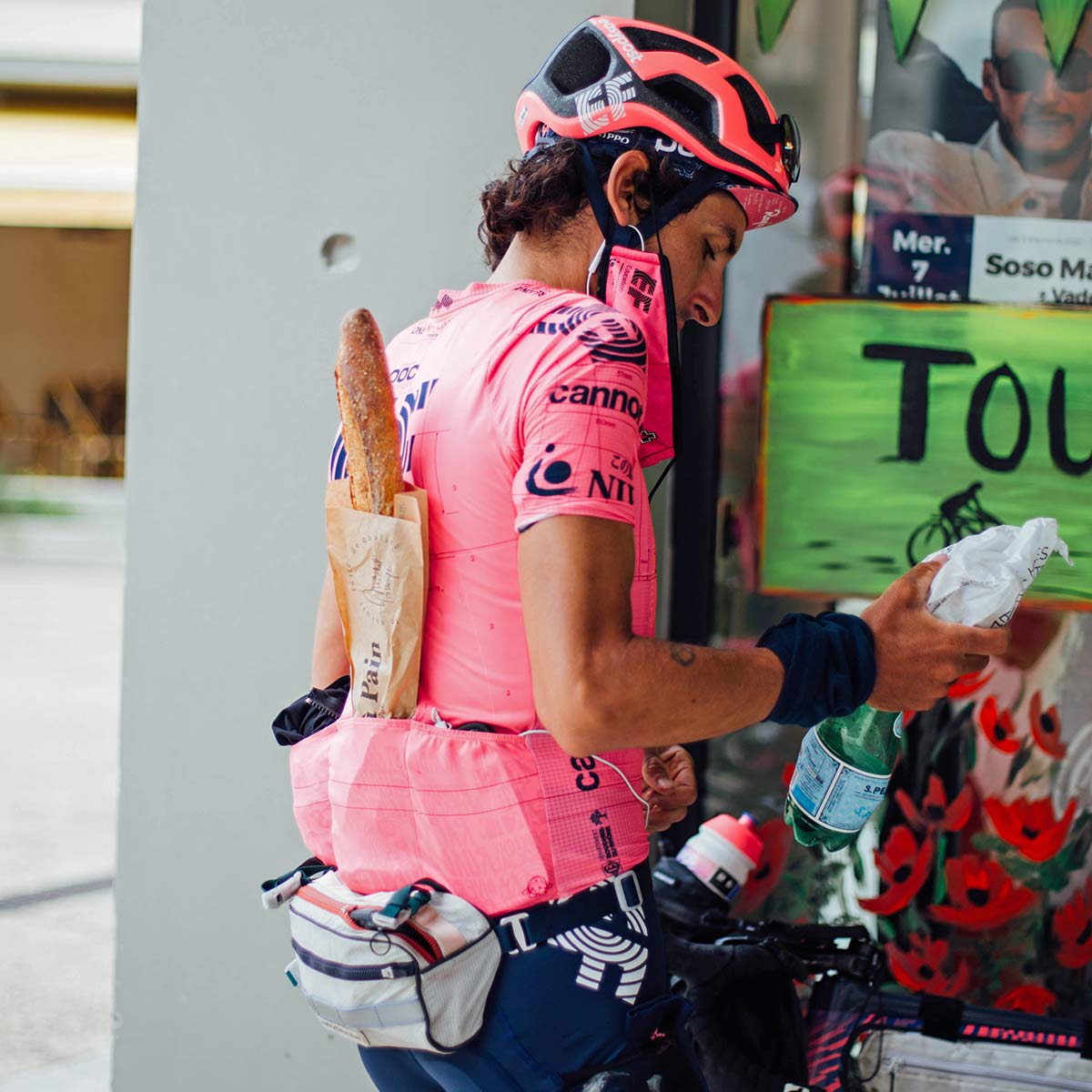 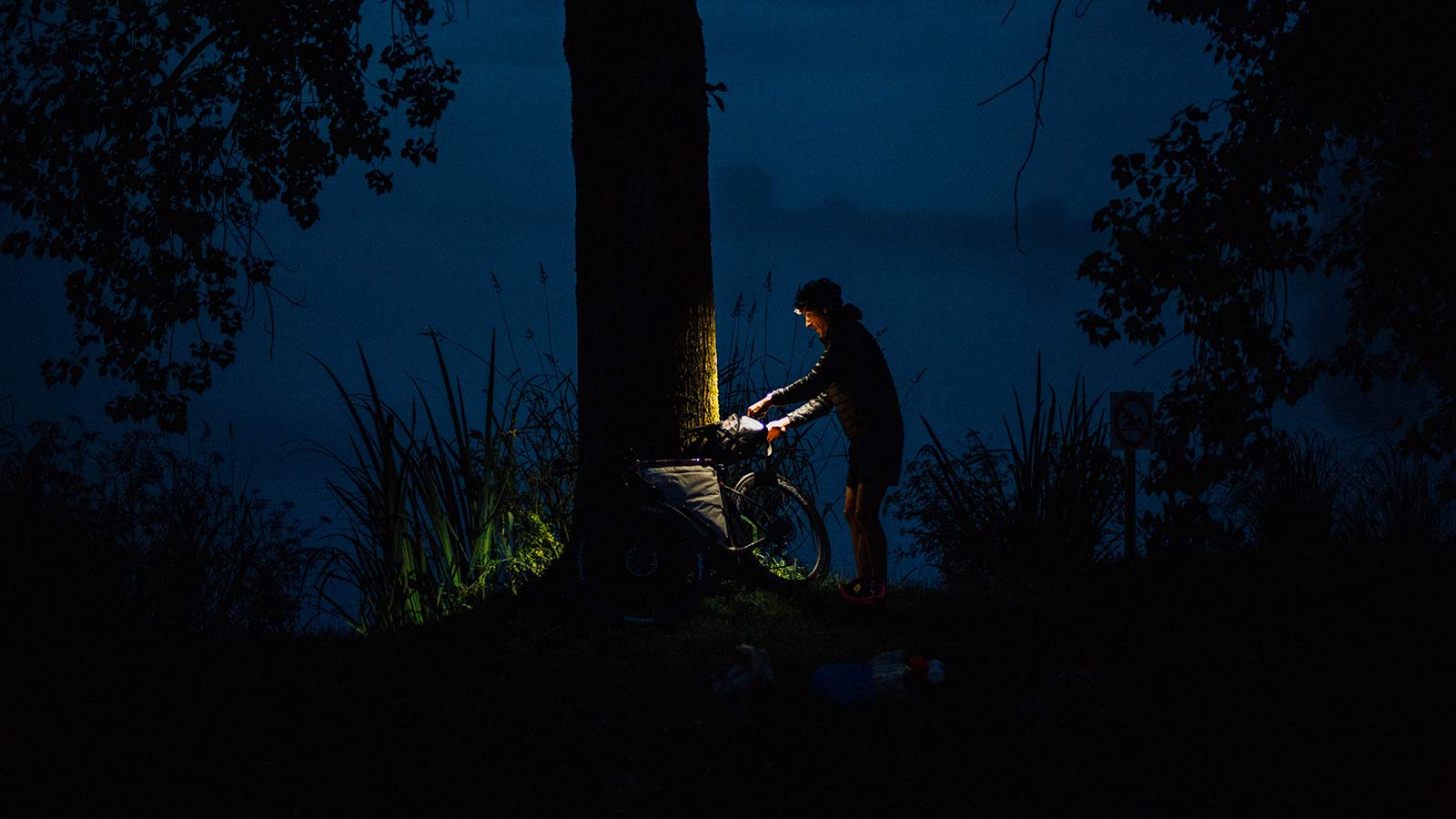 Of those that already are out of the tour are a former World Champ, TT World Champ, and last year’s 2nd place finisher.

And Lachlan’s Alt Tour hasn’t even been easy on himself. 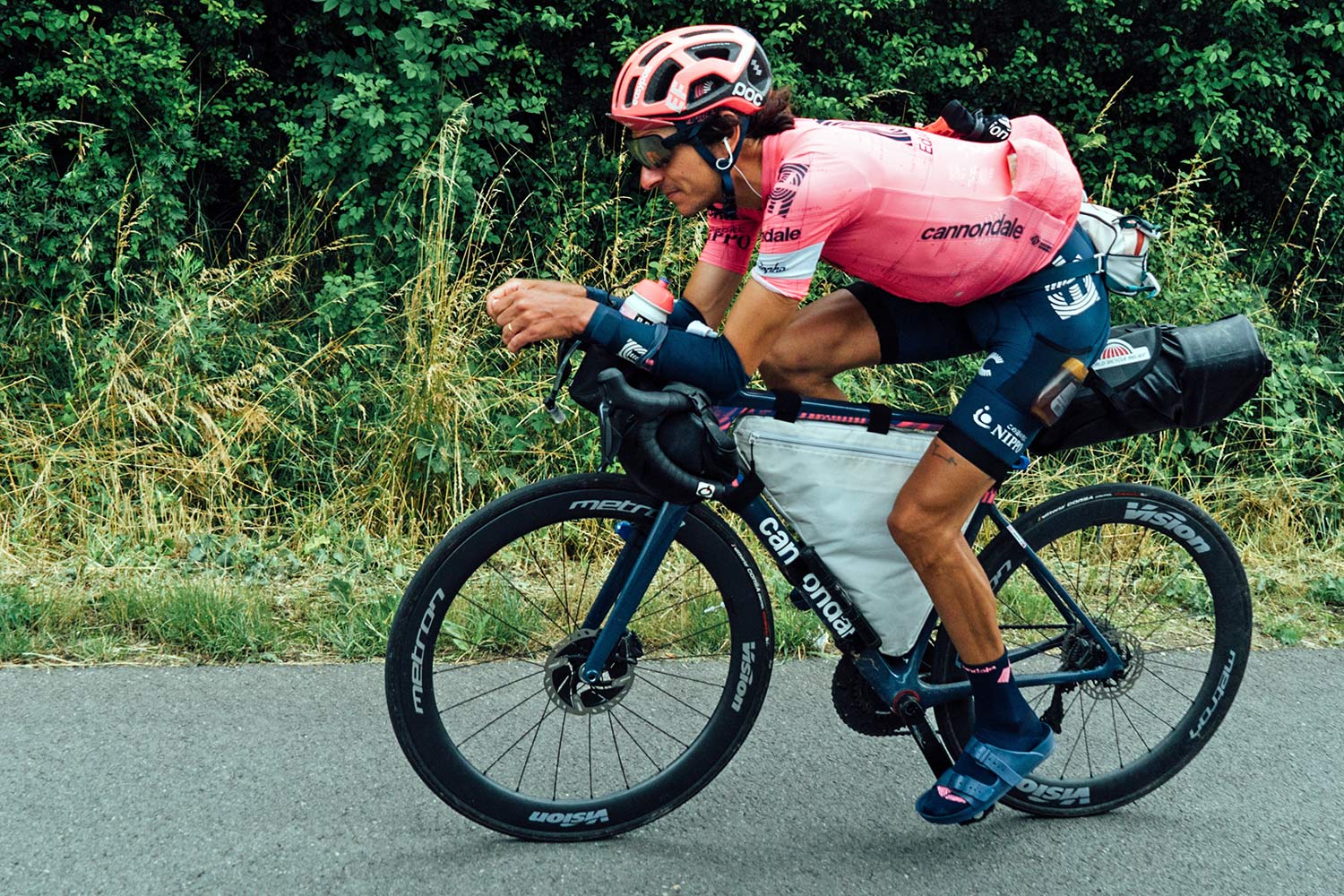 Following along daily, we’ve seen him ride in sandals on department store flat pedals for probably the majority of the effort – including both in soaking rain and up mountains – after he experienced some knee pain early on. He ended up customizing sandals several times to overcome friction, sores & wet feet, and only recently bought a higher quality pair of mountain bike platform pedals from a bike shop he passed en route in (or near) the Pyrenees. 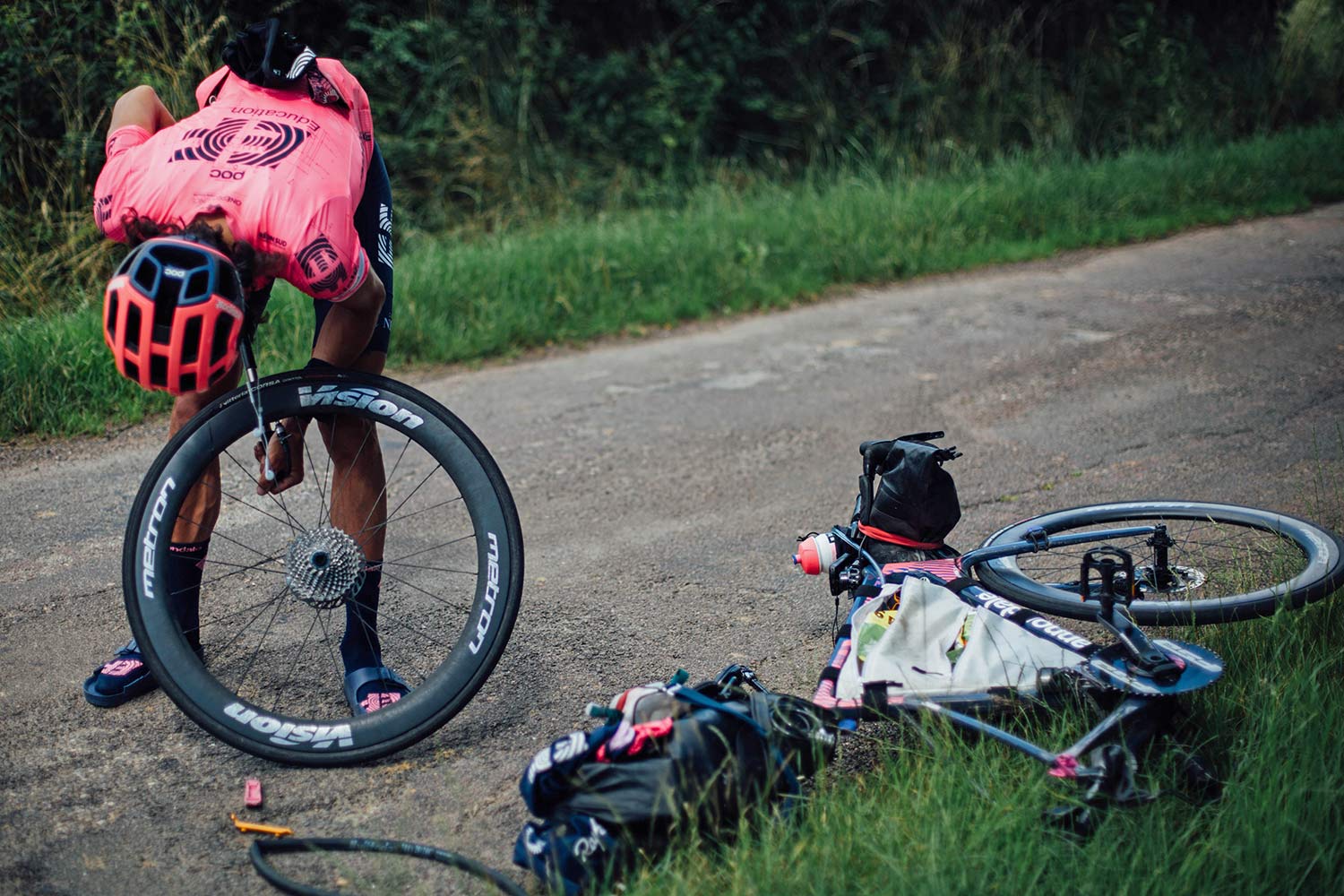 Of course, there were flat tires too. 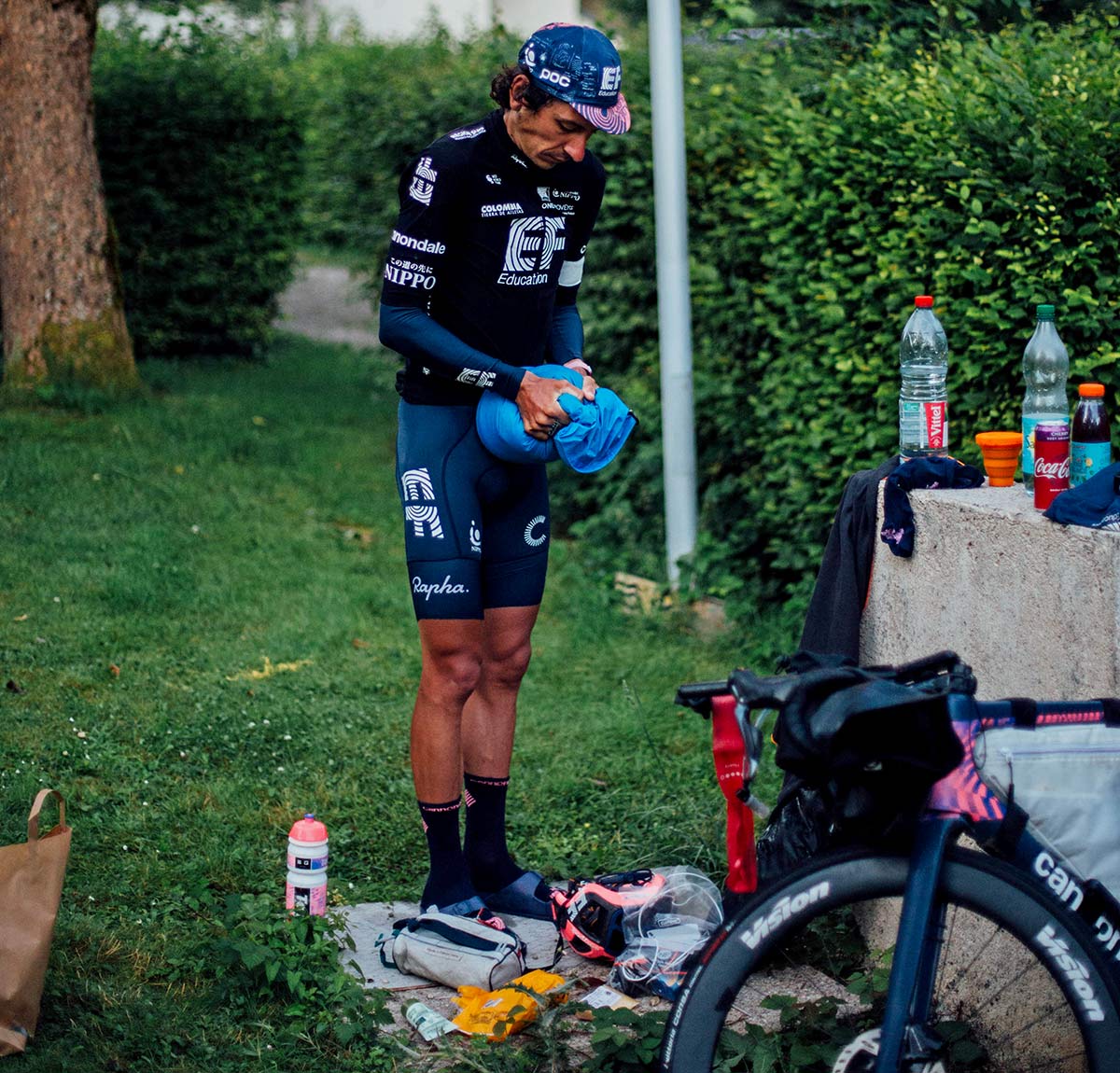 And don’t forget breaking down camp and repacking all that gear and grocery store goodies every morning. This apparently became a multiple hours ordeal towards the end of the tour as Lachlan got more exhausted. 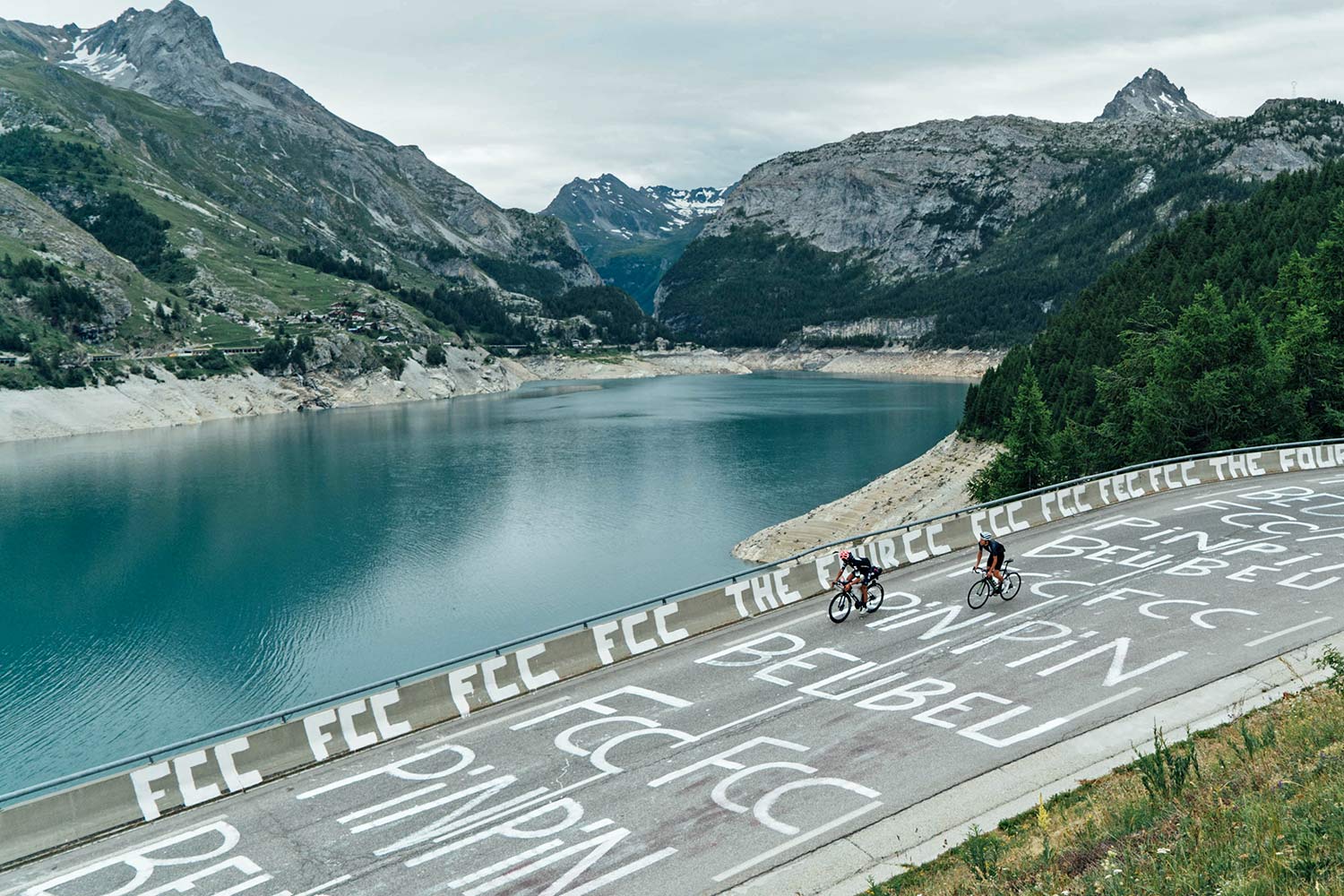 He also ran out his Di2 battery getting stuck in the little chainring for a good part of his day before he could get somewhere where he could recharge the bike while he rested. 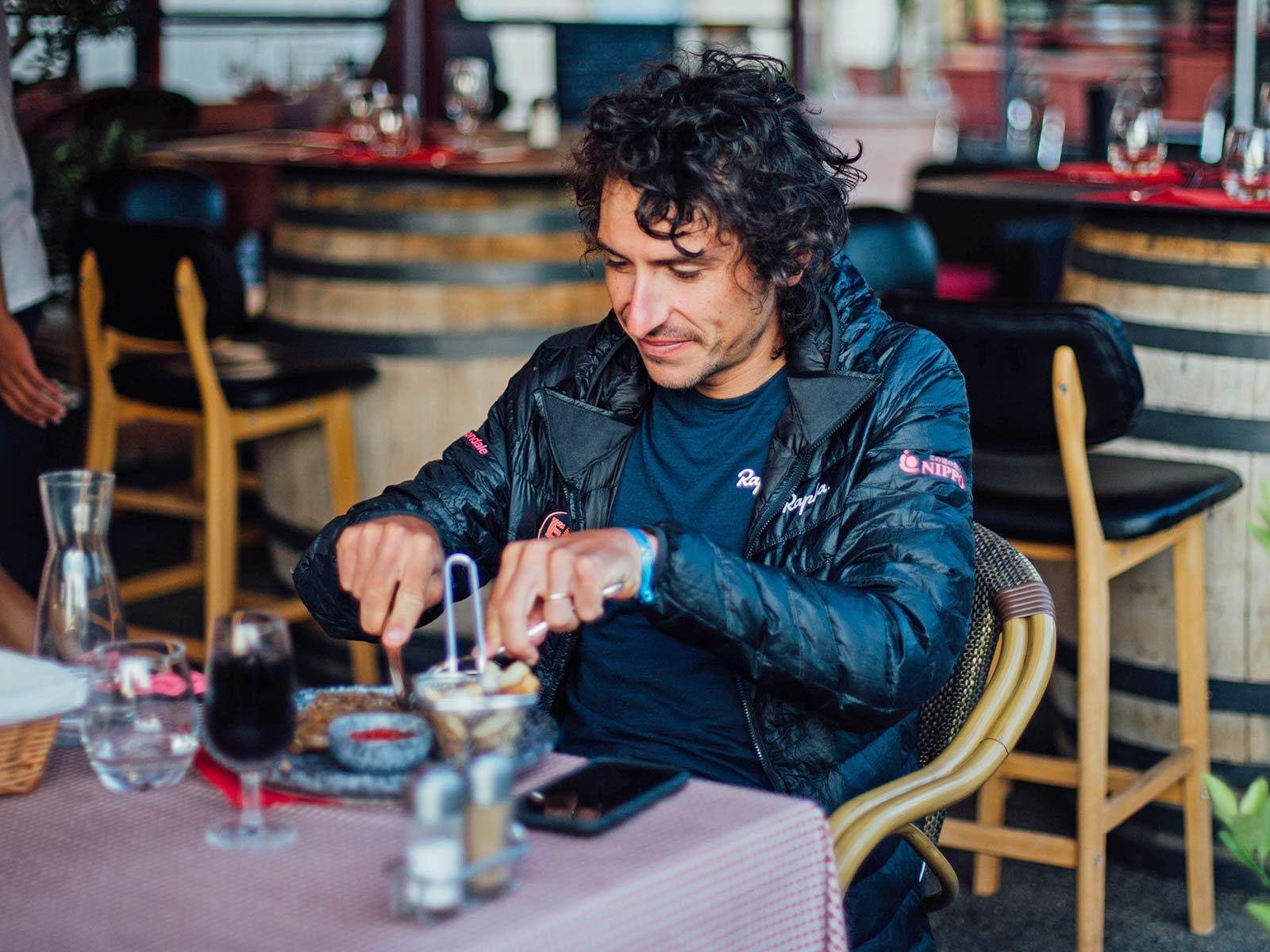 Where is Lachlan Morton now? 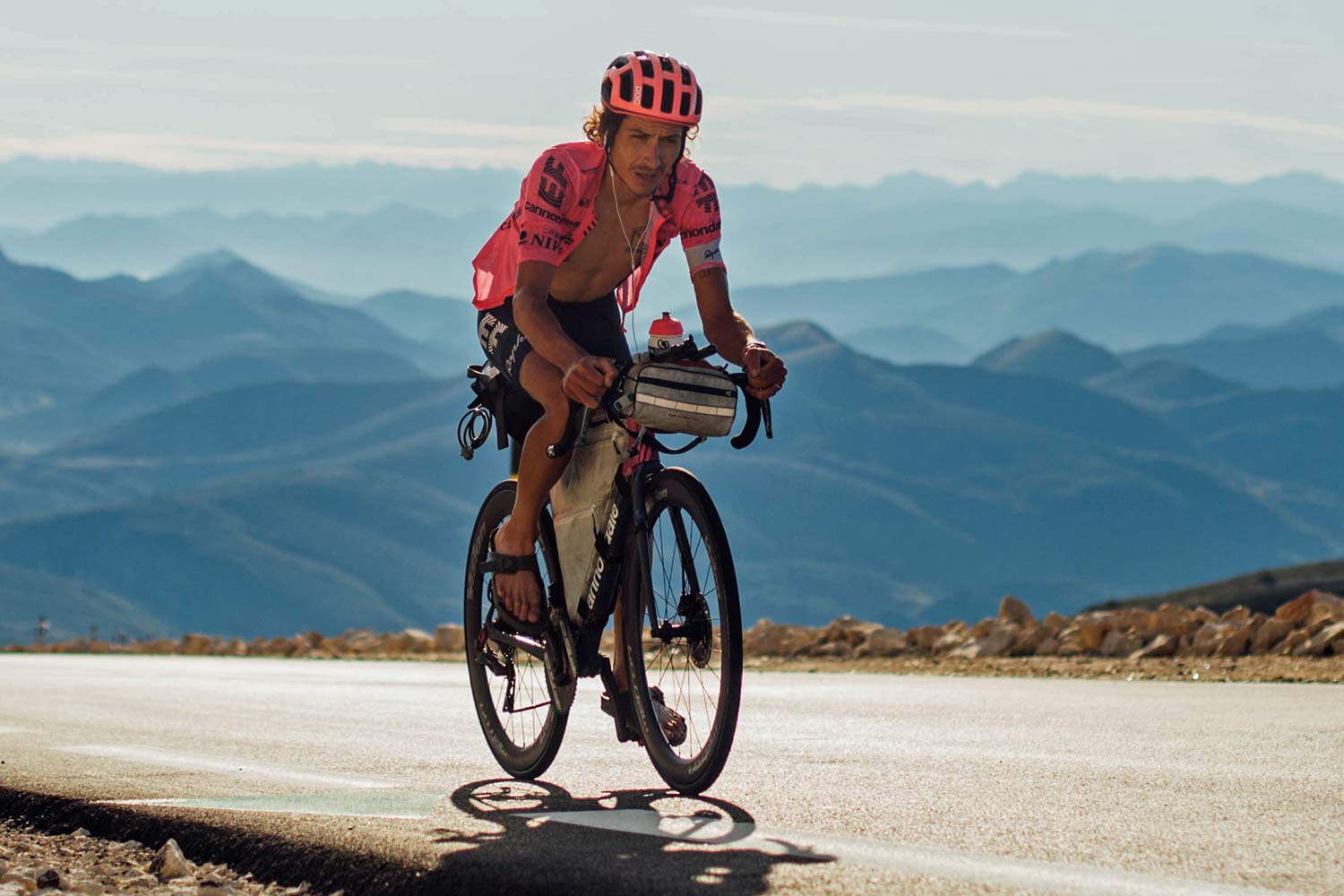 That’s a good question, and a hard one to nail down. You see, he doesn’t really stop much. Lachlan is on the last leg of his Alt Tour, riding the 576km transfer from Saint Émilion in southwestern France back up to the capital. 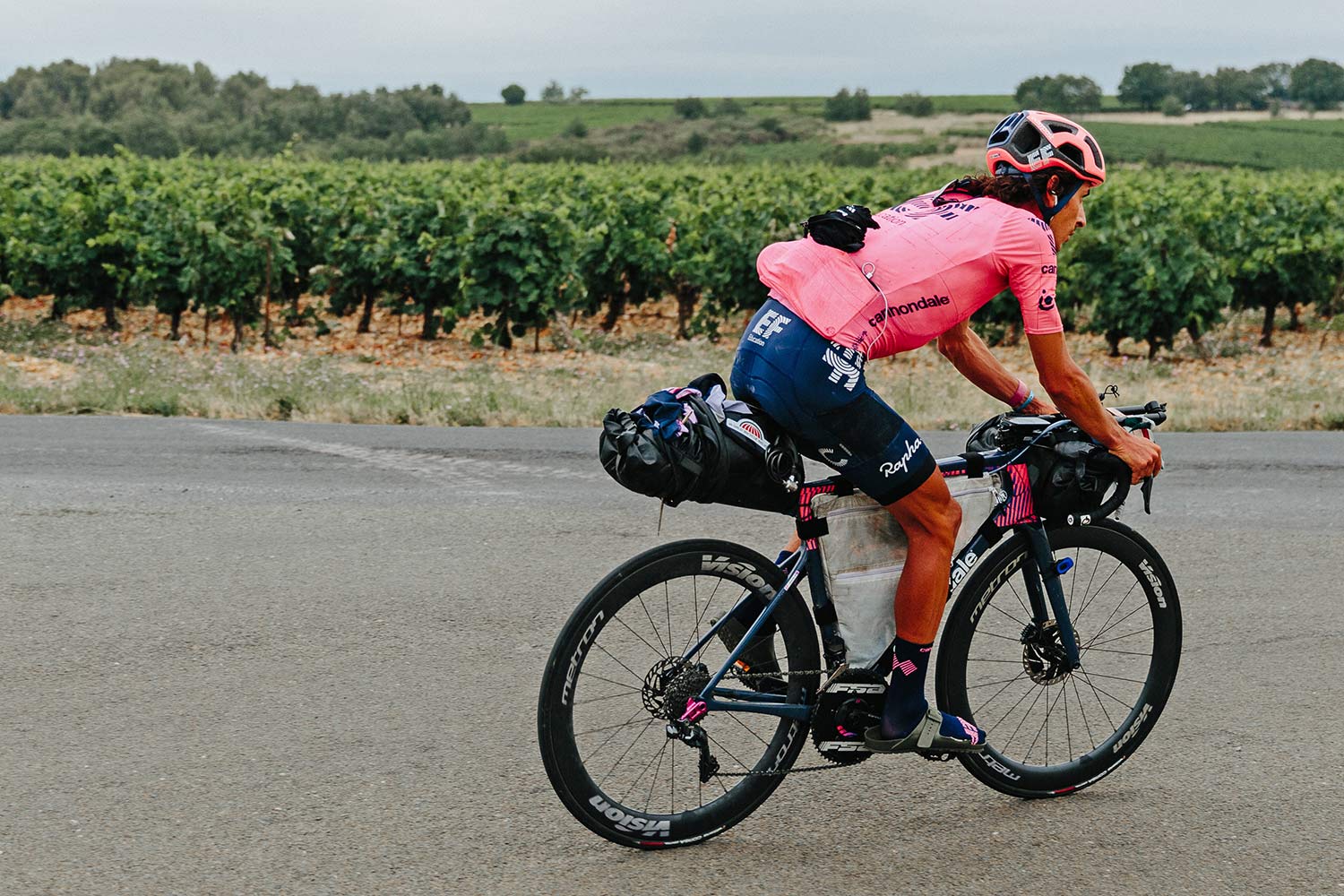 Yes, a 576km long stage in one-go, without sleeping. 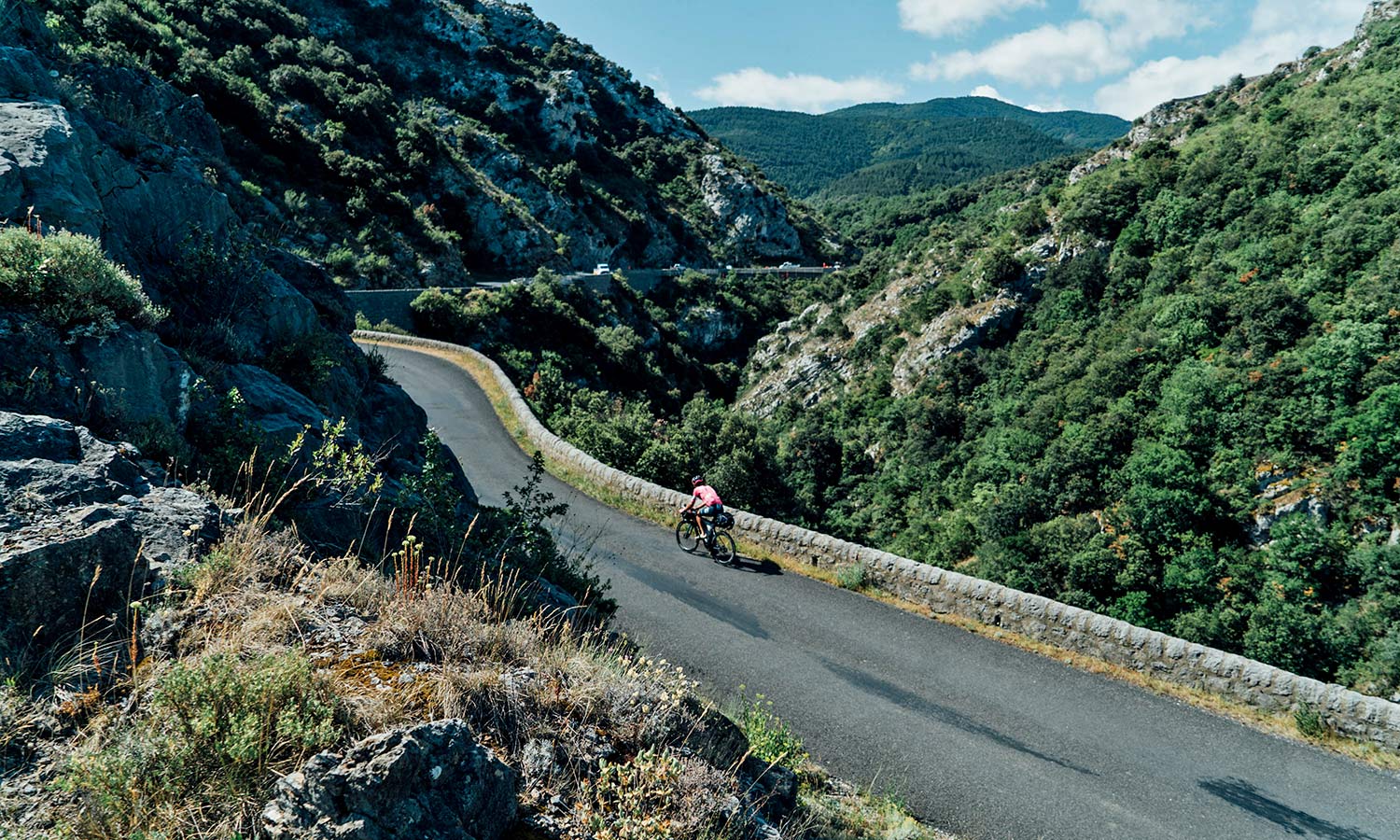 Luckily, he has had a number of people join him along the way at various points to break up the solitude… 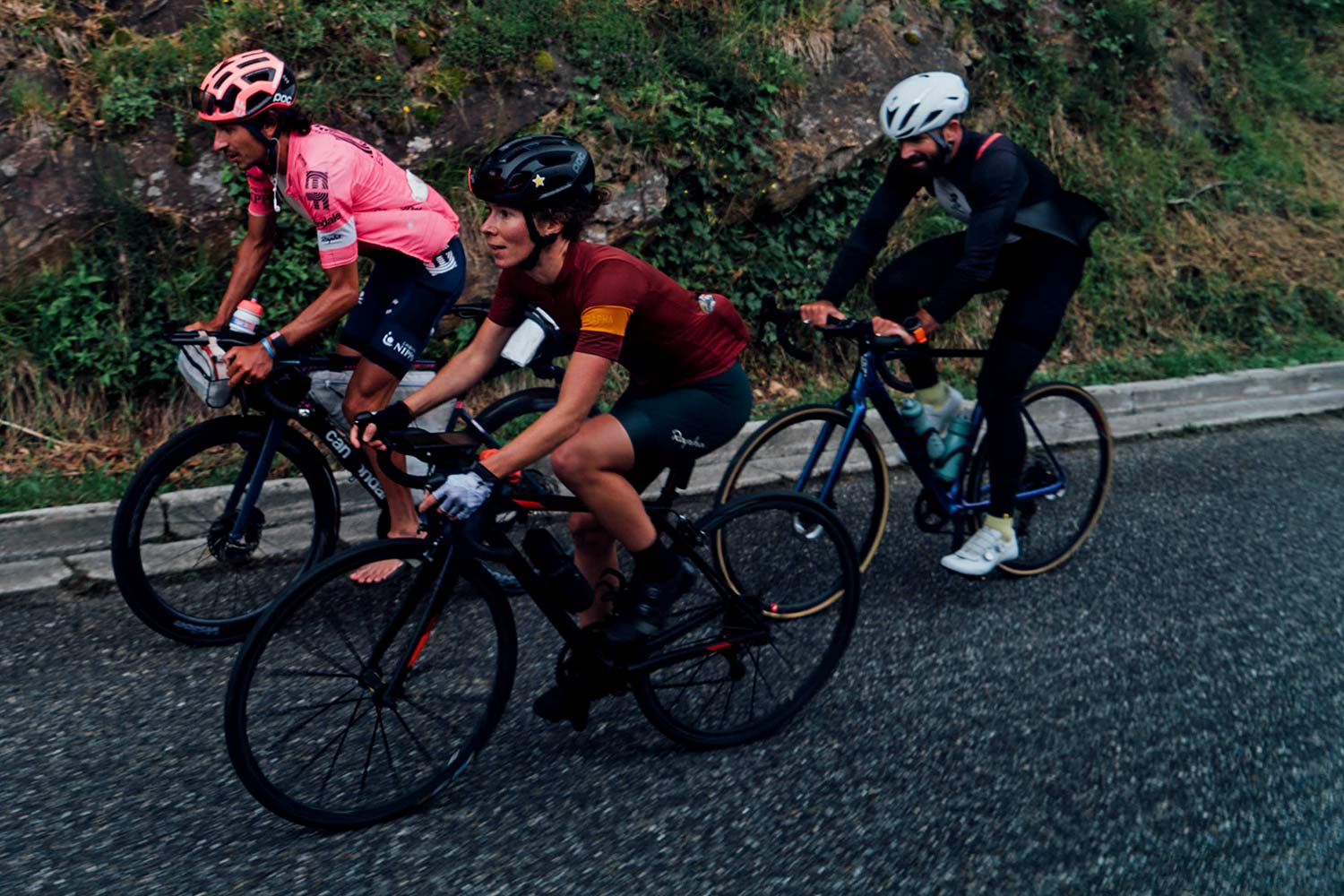 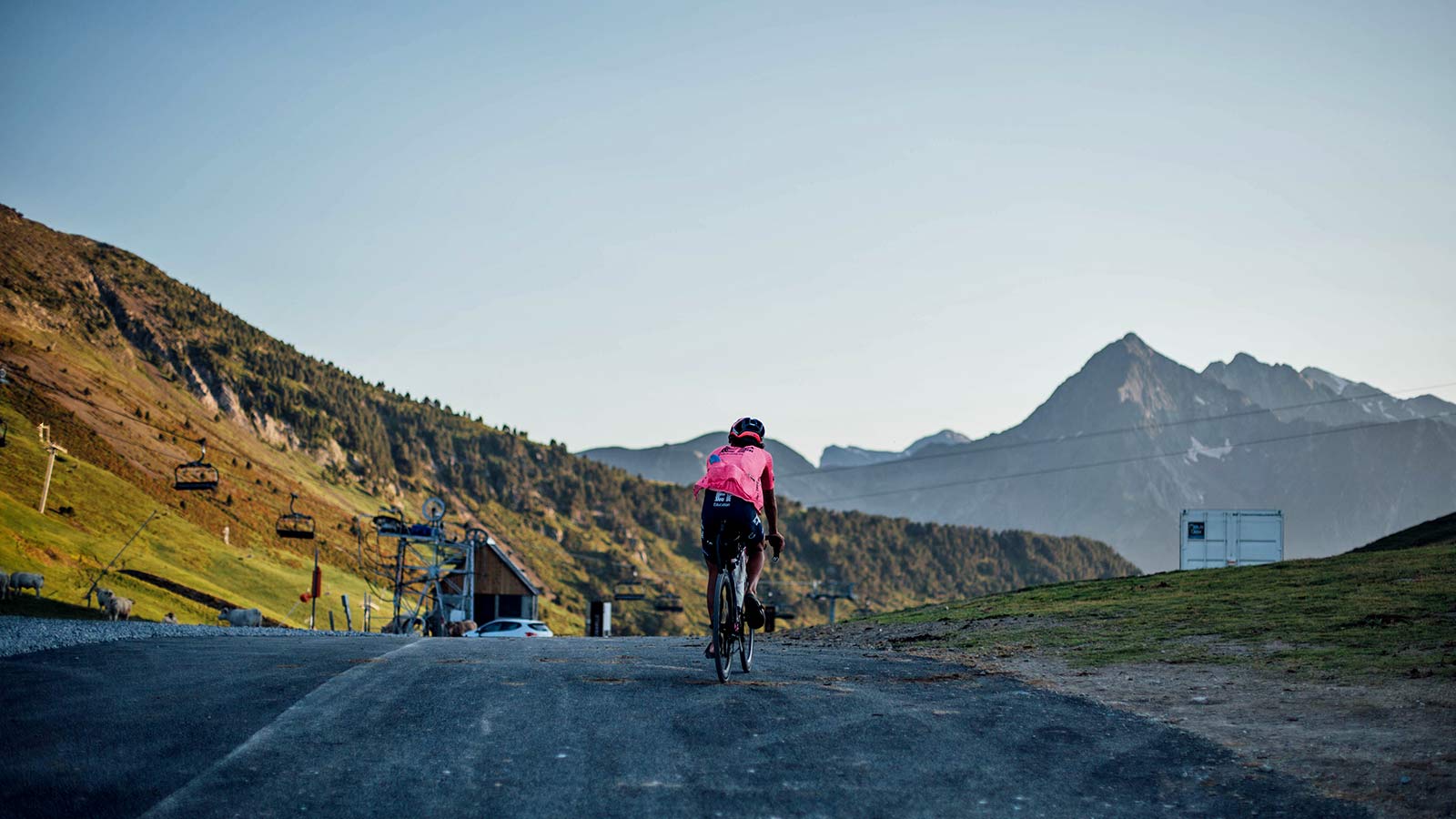 His ultimate current goal is to arrive in Paris sometime on Tuesday morning.

The last we checked on Monday evening, he was somewhere near Vendôme, about 175km southwest of Paris. 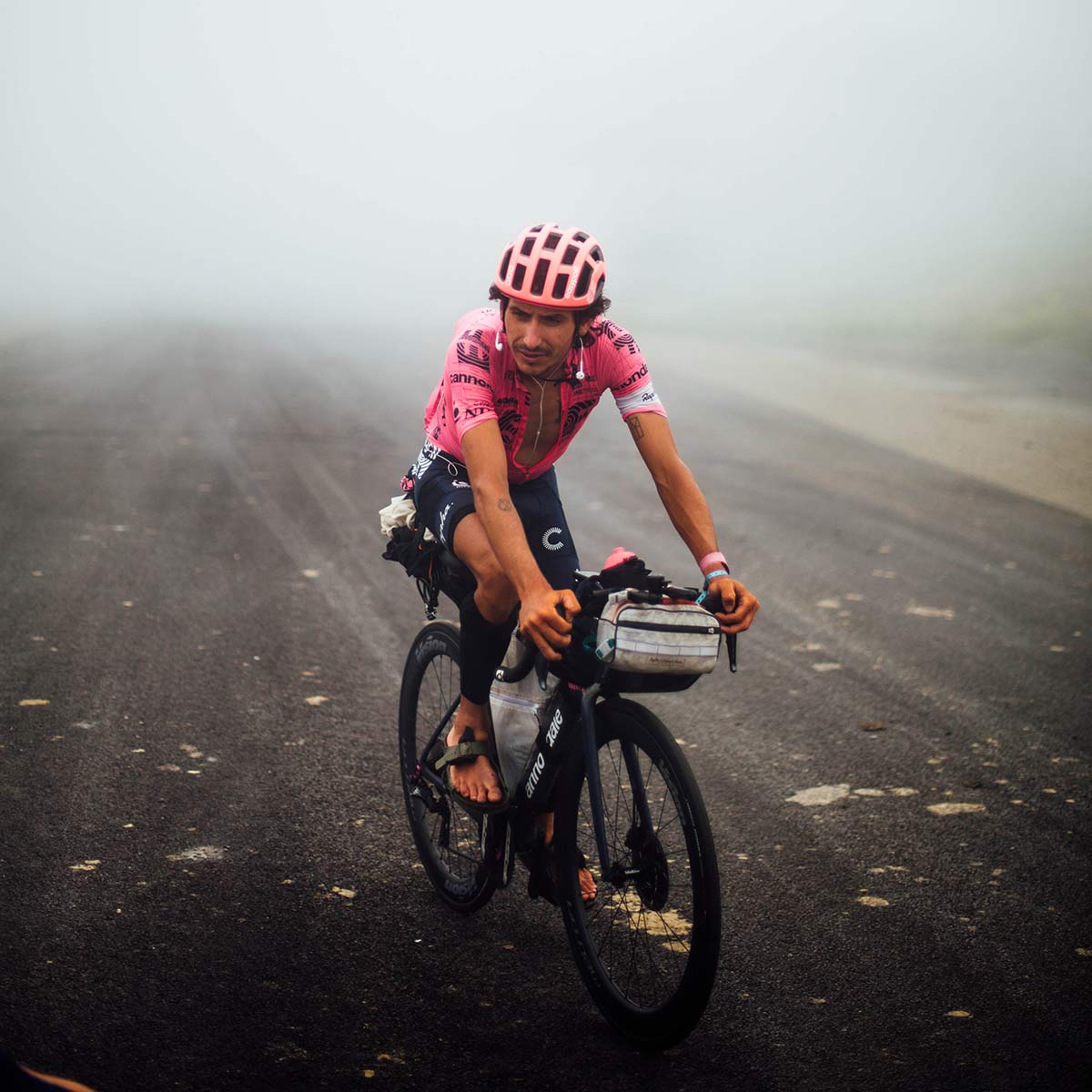 He could even finish tonight around midnight depending on how fast a pace he maintains for the rest of the day? 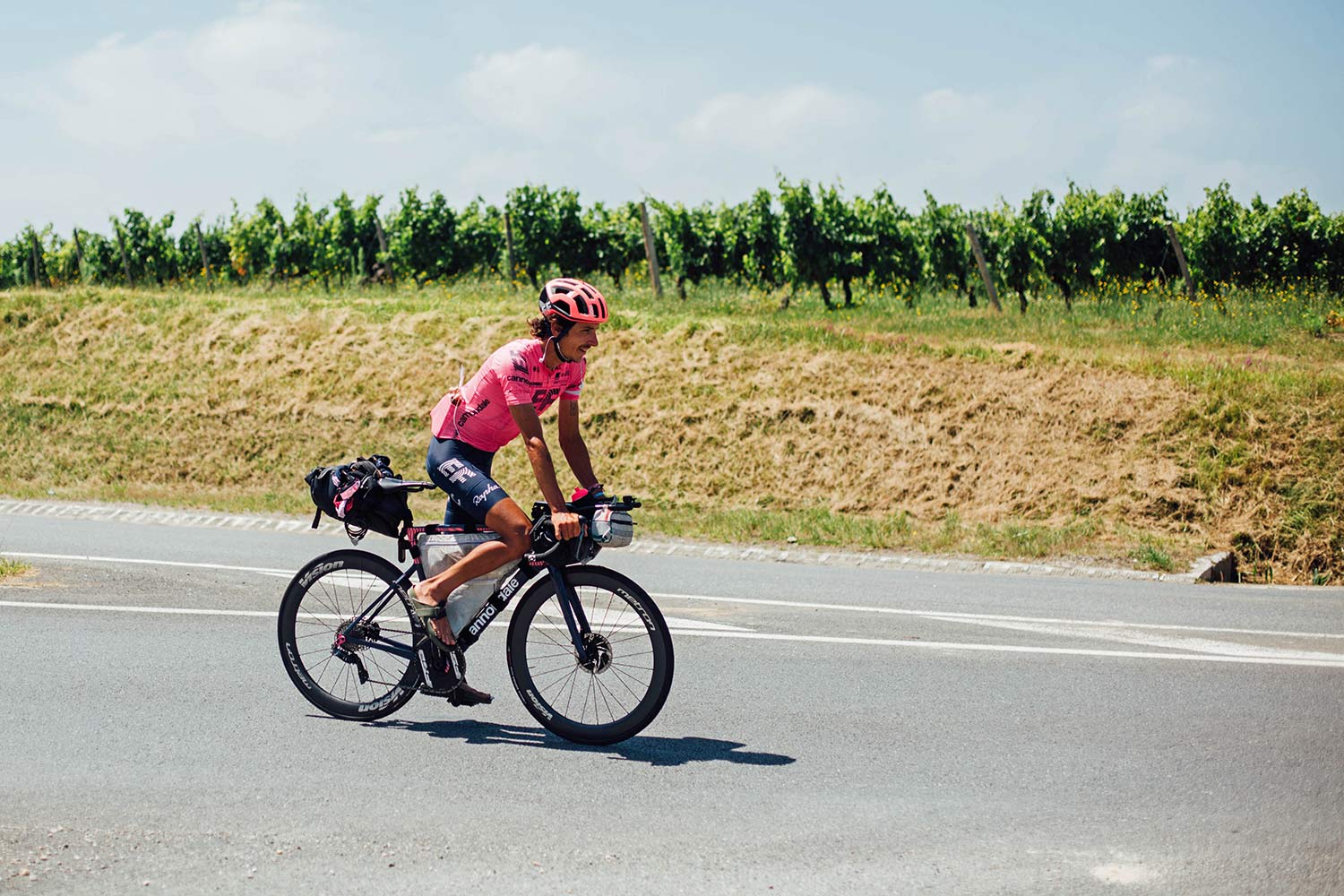 What’s no longer in doubt is that he will surely beat the peloton to Paris. And he’s already raised over £320,000 to benefit World Bicycle Relief. (Update: the final official tally is £368,000, far beyond the original £200k goal!) 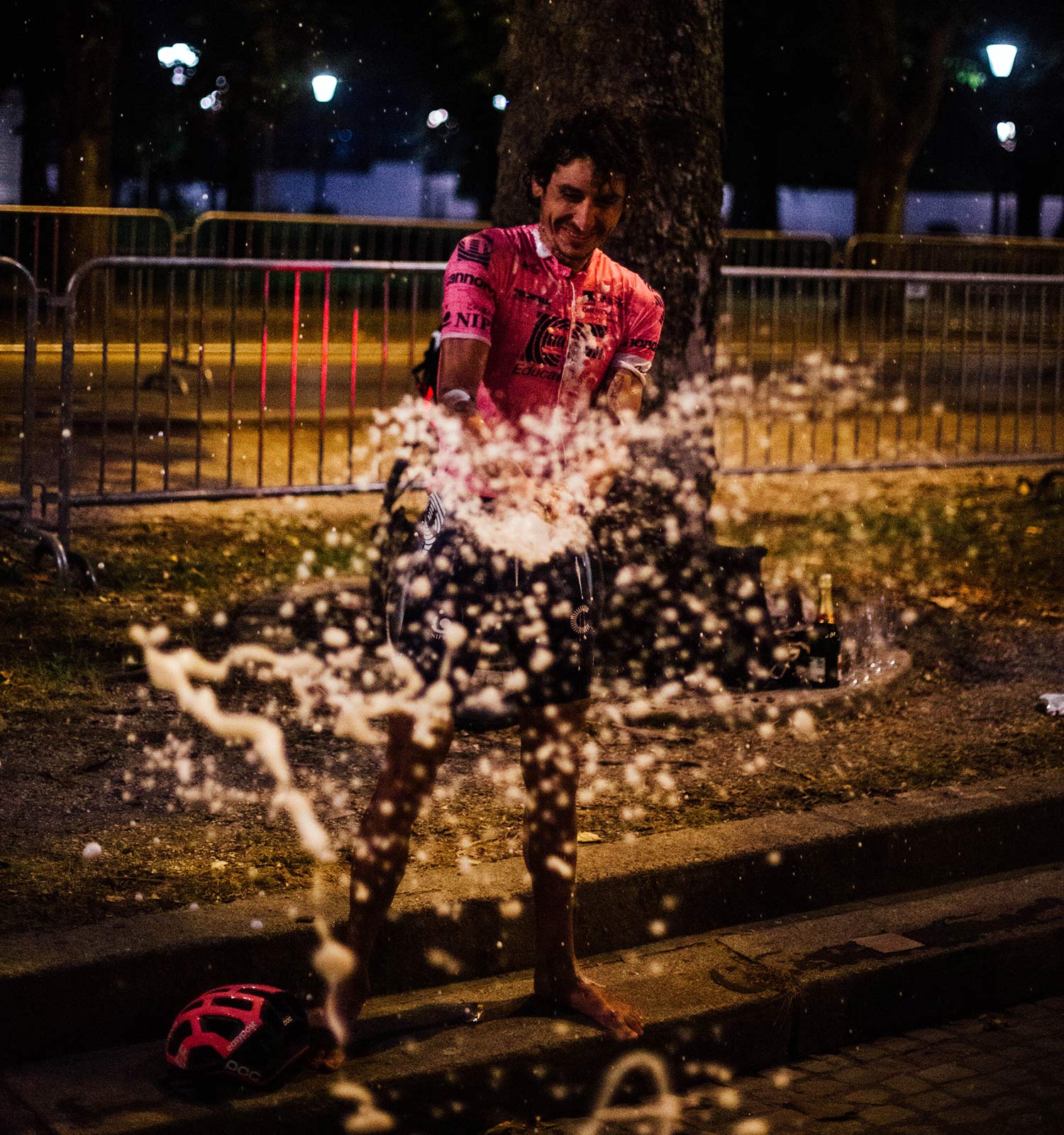 Update: Taking a more reasonable pace he arrived in Paris in the early hours of Tuesday morning, then completed the last 108km Paris stage, finishing with a bottle of champagne on the Champs-Élysées at 5:30 in the morning, just before dawn. 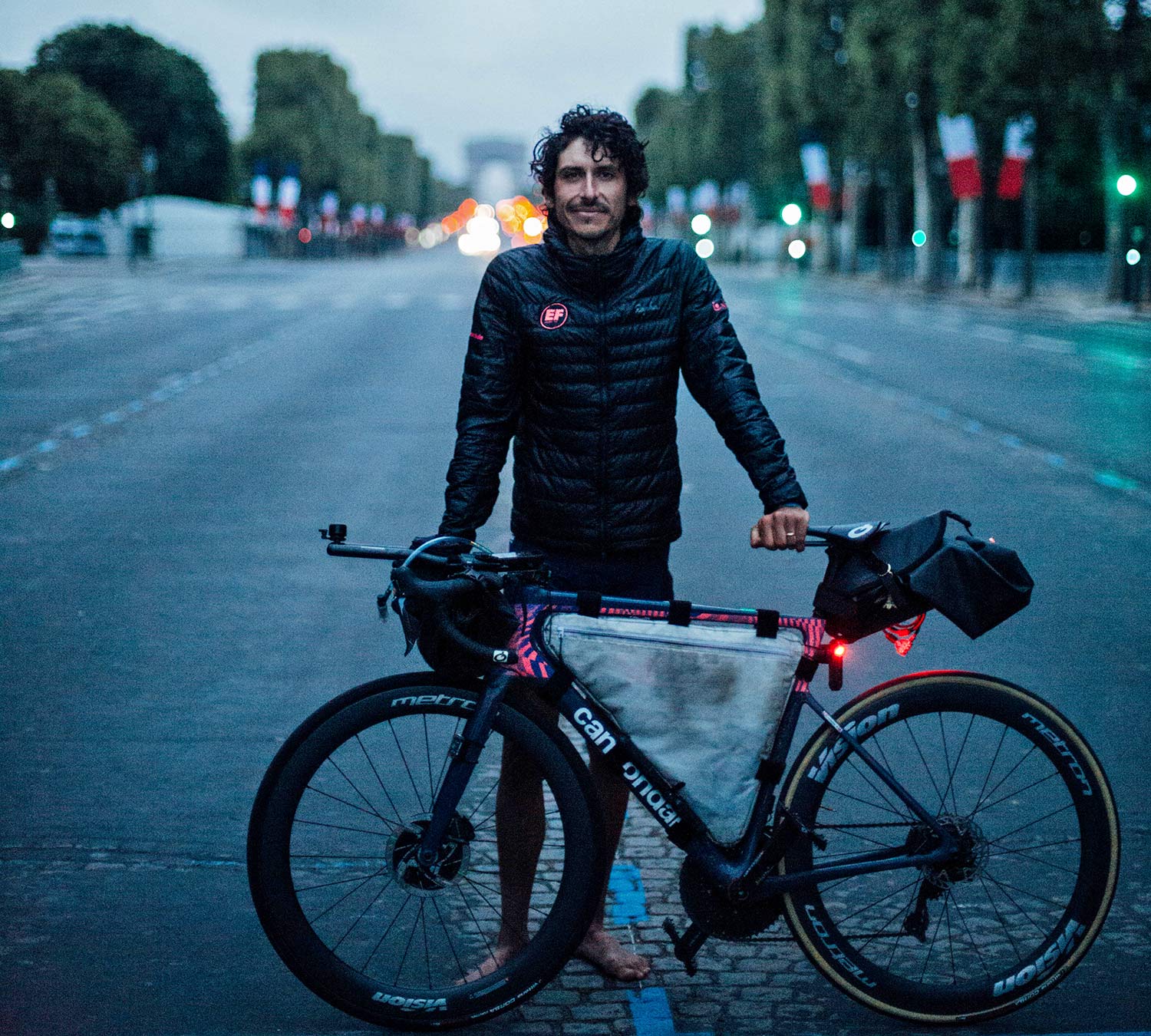 Day 18 on the Champs-Élysées 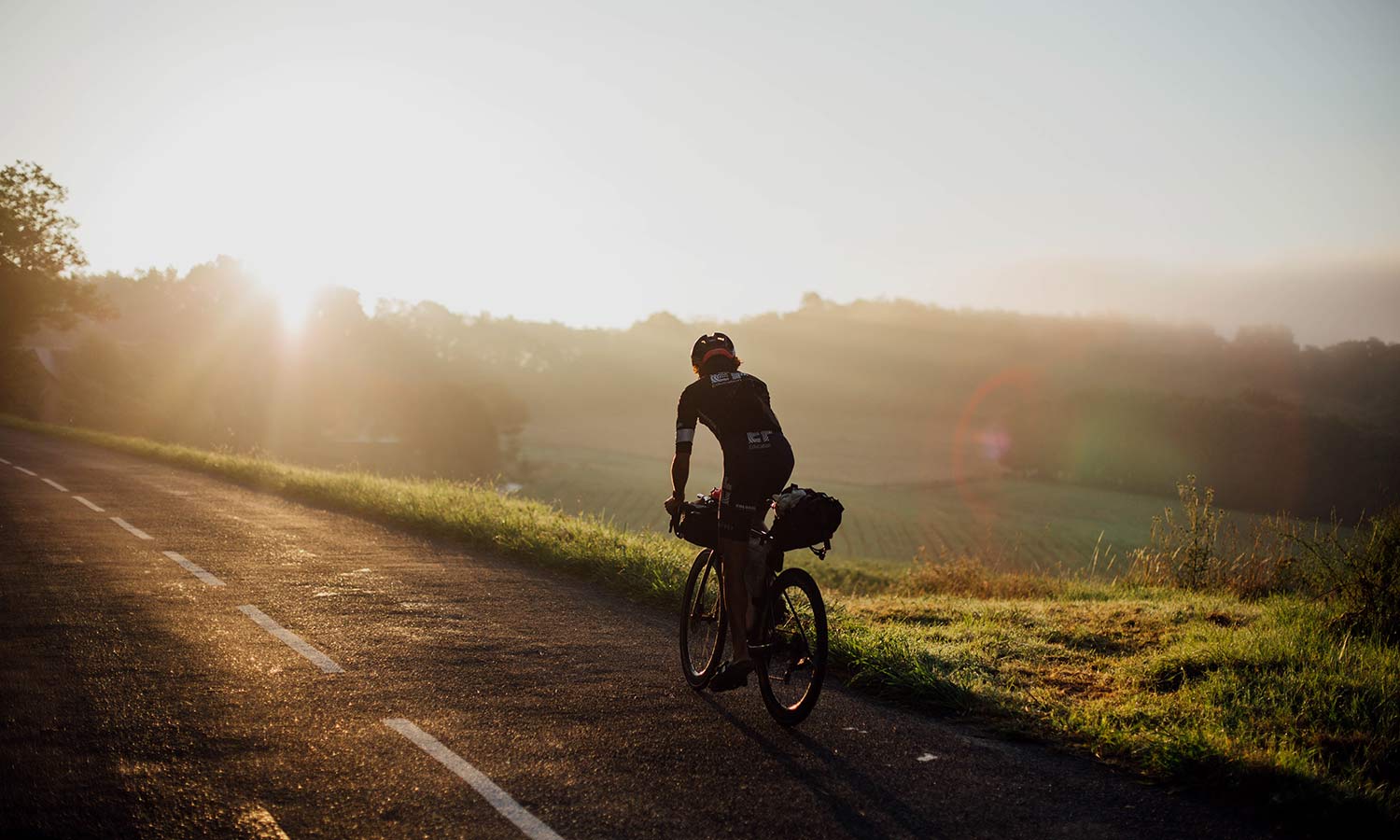 Want to help get more bikes to WBR? To celebrate his wildly impressive ride and help raise even more money for a good cause, Rapha & EF have set up the Alt Tour Challenge on Strava.

While Lachlan will ride the last 108.4km Stage 21 from Chatou to Paris late tonight or early tomorrow morning, you can complete the same distance anywhere you like on Sunday July 18th, the last day of the actual Tour in Paris. Up for grabs is a £1000 worth of Rapha kit and an EF Education-NIPPO jersey signed by Lachlan.

the man is a king. Huge kudos.

There is a guy who is also doint it after he has done the Giro and he plans to do the Vuelta as well. The three grand tours in a year.

Does that “guy” have a name?

Unnecessary, how? It was his idea. He raised a sh!t ton of money for World Bicycle Relief. Gave his employers some added exposure. And had a unique once in a lifetime experience.

…headshake… we get it that you dislike Rapha…but I wouldn’t want to live in a world defined by what you deem important, necessary, and correct.

Why the hate about Rapha? I’m not a fan of the brand either but its a business like any other. The publicity is good for business no matter how “weird or unnecessary”. From a marketing and PR perspective, this is outstanding, only earn them more money in the long run, though not from the likes of us who dislike the brand. Chill out, save your energy for a small business if Rapha is not for you.

Publicity grab? Hmmm. That “publicity grab” has raised over $550,000 for World Bicycle Relief so far.

Pretty impressive feat. . . Maybe not as quick of MPH/KPH as the tour guys, but in every other way this is a more significant accomplishment.

Publicity grab is the least of my worries. I’m ok with Rapha grabbing publicity. For some, they feel good in buying Rapha gear because of the feelings/emotions events like this elicit in them. For others (like me), they feel good that people have something to feel good about. I subscribe to Sheldon Brown’s thoughts regarding ‘thons…

I’m surprised that a Shimano sponsored rider didn’t heed Sheldon’s advice and rock the most elevated footwear of all time, the lauded Shimano SPD Sandal.

Man what an inspiration. I’ve followed Lachlan closer than the tour this year. Excellent initiative by EF and Rapha to raise money for a great cause.

Hard to put a snarky spin on this one.

Kudos in all regards!