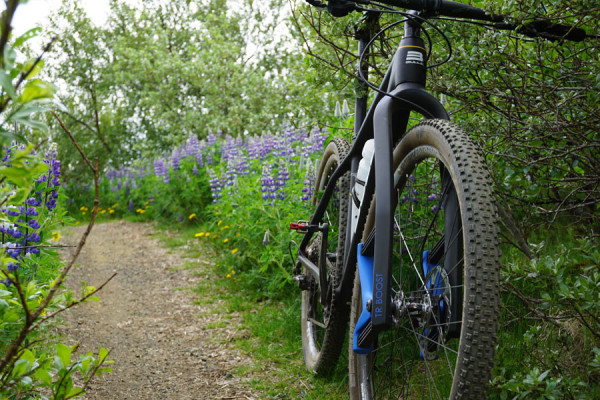 Lauf Forks, whose unmistakably unique leaf spring suspension forks garner stares and suppositions, have just unveiled the second generation of their Trail Racer 29er fork. Called TR Boost (for Trail Racer Boost), it widens the legs to accept the new 110mm Boost front hub standard. That gave them the opportunity to further refine the overall design, leading to improvements in form and function throughout.

Spring on down for more… 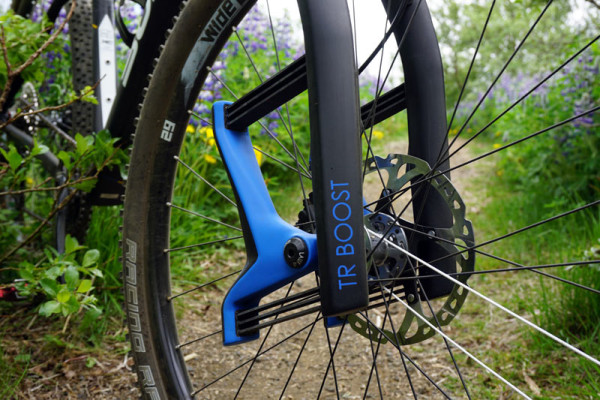 The new TR Boost fork comes in at a claimed 1040g, up a bit from the claimed 980g for the original (and still available) Trail Racer 29er fork. They did mention they might still be able to carve a few more grams out of it, which wouldn’t be surprising considering our original test fork weighed in at just 971g.

A bit more weight is to be expected when things grow a bit wider, but there’s more to it than that.

The shoulders of the crown are deeper and thicker, with a few grams worth of extra carbon moving to this area to reinforce it. The inside width grows 10mm to accommodate the Boost axle width. The bigger cross sections of the shoulders were done to make the fork stiffer laterally and fore/aft. Some of their top testers said the fore/aft improvements are noticeable under really, really hard front braking, reducing brake shudder. The lateral stiffness of the fork was already very good, but “parking lot tests” where people would lean the bike halfway over and press down on it would show uneven spring compression and enough flex to lean the tire closer to one leg. No, you aren’t likely to ever experience that under real world riding conditions, but they figured they’d go ahead and beef it up anyway to increase showroom appeal. 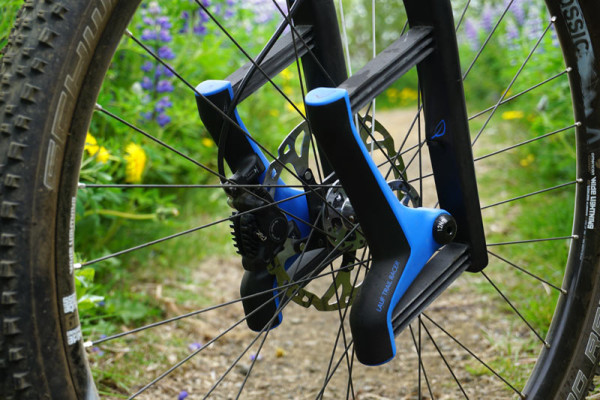 The unsprung sections are unchanged, weighing in at about 260g for the pair. 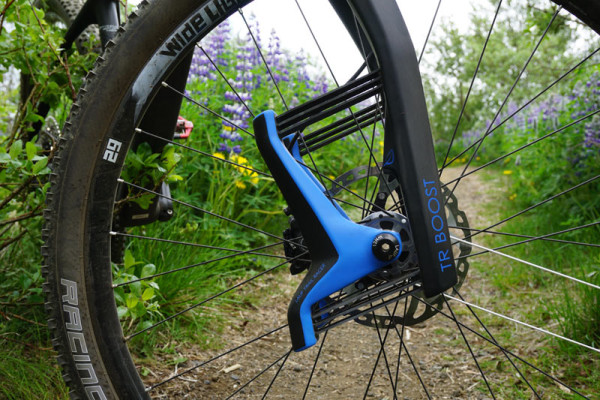 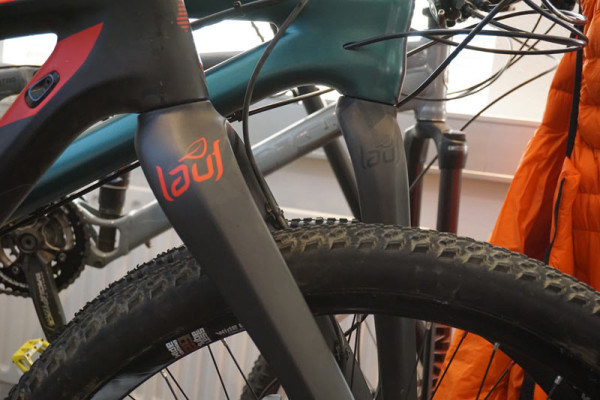 The new Lauf TR Boost fork is in the foreground, the original Trail Racer 29er sits behind it.

With the functional changes come aesthetic ones. The new crown and uppers are much, much deeper. This improved fore/aft rigidity to prevent it from flexing backward too much under really hard front braking. 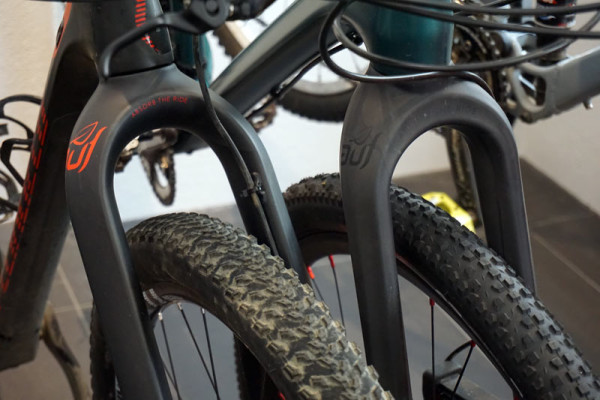 The legs also got a bit wider, which improved lateral stability. The front edge became a little sharper, without the flatter face of the original. 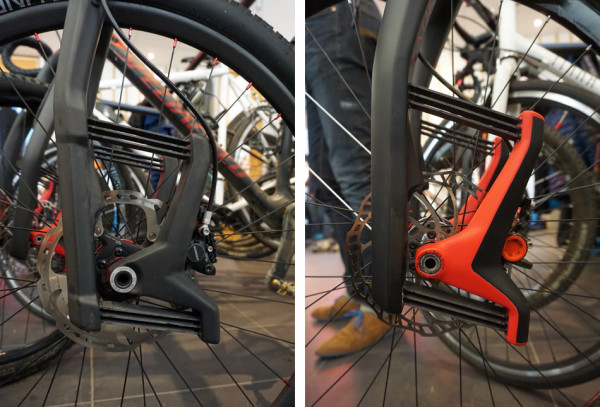 Those wider, smoother legs go all the way down, giving the entire piece a smoother look without the bulges around the leaf spring insertion point on the originals (left). 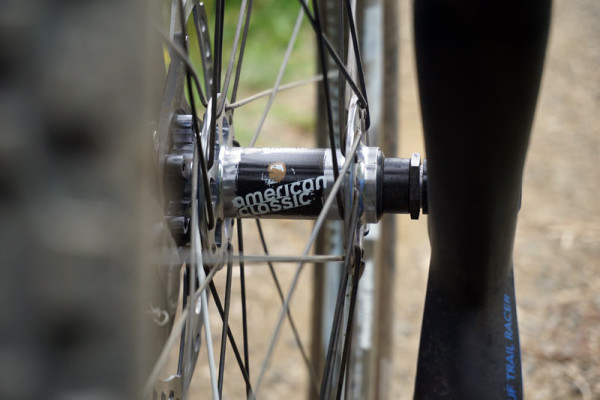 Lauf says they had it ready before Rockshox and Fox launched their Boost forks, so they’ve been working on it for a little while. Available in September, retail will be $990. The original Trail Racer 29er and 27.5 forks remain unchanged.

They had a few test bikes fitted with American Classic’s new Boost hubs, which use a design that only pushes the left side’s spoke flange outward to improve the tension balance and triangulation rather than push both flanges out to the extremes.

Unfortunately, snow cover kept us from the most amazing of singletrack trails to test the TR Boost fork, but the limited number of test bikes (which were outfitted with narrow, almost semi-slick tires) wouldn’t have offered the very best of test conditions to validate their claims of improved stiffness. That said, we haven’t noticed any lack of stiffness with their original model on our long term test bike, which seems to be the general consensus among anyone who’s actually ridden one, but improvements are improvements. And if you have to redesign it anyway, might as well make improvements.

Look for more coverage from our visit to Lauf’s HQ in Reykjavik, Iceland, soon!

You know, there are those of us that remember what riding a 60mm travel undamped suspension fork was like. What a miserable experience that was. Paying almost $1000 for the privilege, thats just ridiculous.

@Cowtowncyclist. I’ve ridden one of these and it’s not like the days of elastomer Manitous. It’s more like having a fat bike tyre on the front, it hoovers up all the little bumps and vibrations without the drag. It certainly wasn’t unpleasant to ride, I’d go as far as saying I’d consider over a Sid or RS1 for an xc bike.

This thing is like one of those Jones Bikes: All form and no function, made solely to have lonely people come up to them at the trailhead so they have something to talk about to someone, anyone who’ll listen.

id need reaaaaaally hard facts and data and actual tests to use that over an RS1. I would like to be convinced, but i’m really not 😐

Ain’t nothing wrong with conversation pieces.

Hard to understand how anyone considering a Lauf fork would be desiring Boost at this time.

I think Lauf should be considering a “gravel grinder” application before 27.5+. Why not 29+?

@’Merika wins the internet for the day.

These are cool. Like a carbon rigid fork with a bit of suspension, and zero maintenance.

Is it just me or does the dish on that wheel look to be off on the fourth row of pictures? Or is just the angle of the shot?

Lighter than every other suspension fork, I would consider it

I notice that the A2C measurements seem really off on these forks, not comparable at all to the typical 100mm fork they would replace. On my 650b hardtail I’d have to get the 29er fork to not jack up my head tube angle because it’s such a short fork.

Heffe, as you would on any short travel fork….

Do they seriously think that a 85kg rider and a 65kg rider can run the same spring?
If I jump on my riding partners bike at about that difference, my weight rims out his tyres and sags the fork to about 50% travel.

With very limited travel and damping surely simply riding 3″ 29er tyres on a rigid would be a better proposition.

Memories of an elastomer rockshock fork making me grind to a scary halt as I thought that the handlebars had broken because of the lack of damping come flooding back.

Need to see one in real life before I believe this.
Now if it had at least 100mm and maybe a oil damper and a way to add/remove leafs………….

I love my Lauf- having a sub 20# XC hardtail was a goal and I got it by choosing this fork- if you haven’t ridden it, don’t knock it till you’ve tried it. It is basically all the things I like about rigid fork with give when I want it to give. As far as a conversation piece, I don’t need or really care who looks at it or wants to talk about it- I’m hardly that insecure and maybe that’s more of a reflection of your personal negative slant on life. I also won’t apologize for being able to afford whatever toys I enjoy- stay in school and you can buy what you want. Being a hater? Who has time for that, especially something you have not experienced riding. It’s a great fork! Looking forward to putting this new one on a 2016 Superfly!

I want it cheaper and for 26″ wheels. China please clone it

OK, now that you all have thought of funny ways to “out-NEG” each other with disparaging remarks and comparisons of suspensions-past, let’s move on.

I think it’s likely, very likely, that these forks are bad-ass, and should be reserved for racing and smooth trails. IMHO, there’s more than meets the eye. Don’t be so fast to bash; I mean, I’m not going to buy one, and I’m not going to call it crap!

Good gravy, so many armchair engineers.

They wrote boost on the side of it even, I can hear the internet hate machine frothing at the mouth…

I had the opportunity to chat with these guys at SEA OTTER and they were a great group of dudes. Sure the forks look really weird, but when you want to think outside of the box the product in most cases will be odd. Personally I love the design, it’s simple form follows function and it actually performs very well. I still think that this would be awesome a cross bike or a gravel bike

Needs rack mounts on the legs, would be great for a bikepacking rig.

this will be a sweet upgrade on my conestoga wagon

You guys ever see that simulation of the evolution and machine learning of soft robots? It’s this block of cubes whose sole purpose is to learn how to move faster. It has 4 materials to choose from, and it can rearrange itself into different shapes. And it does. That’s basically like the evolution of suspension design. The Lauf fork is a solid design. Maybe by the third or fourth generation, its appeal will become more apparent. Unfortunately, iteration may not come fast enough for the company to survive.

If the Lauf fork can carve out a niche for itself, maybe linkage forks can do the same? On the other hand, what would a 140mm linkage fork even look like?

The fork isn’t for everyone. That there’s so much vitriol over it only shows what a miserable and cowardly lot many of you bike snobs can be.

I borrowed one this weekend and it is a great fork, if by MTB you mean riding well maintained fire roads and super smooth trails. Period.
Well, maybe for cyclocross or road classics like the Paris-Roubaix too, but skinny tires are not my thing so I couldn’t tell.

@ Jason Ray Well said. If I decide to go for the Trek Procaliber over the Top Fuel I’ll definitely consider this fork over the SID or RS-1.

I expect this will find its niche, but its not XC racing. Maybe single speed, or gravel bikes. Do not consider over Sid or RS1, personal opinion.