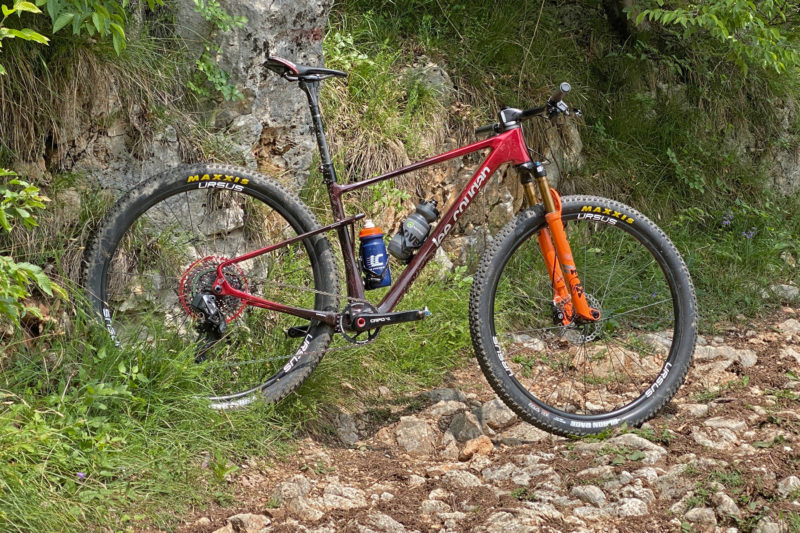 Lee Cougan aims to rekindle the MTB brand’s heritage of premium innovation with all-new Rampage Innova softail XC bike. Promising the lightweight & efficiency benefits of a hardtail AND the improved traction & comfort of a full-suspension, this unique new Rampage Innova frame delivers 30mm of tunable, oil-damped travel that could just make it a perfect happy medium.

The MTB softail is back and it’s much more advanced than ever! 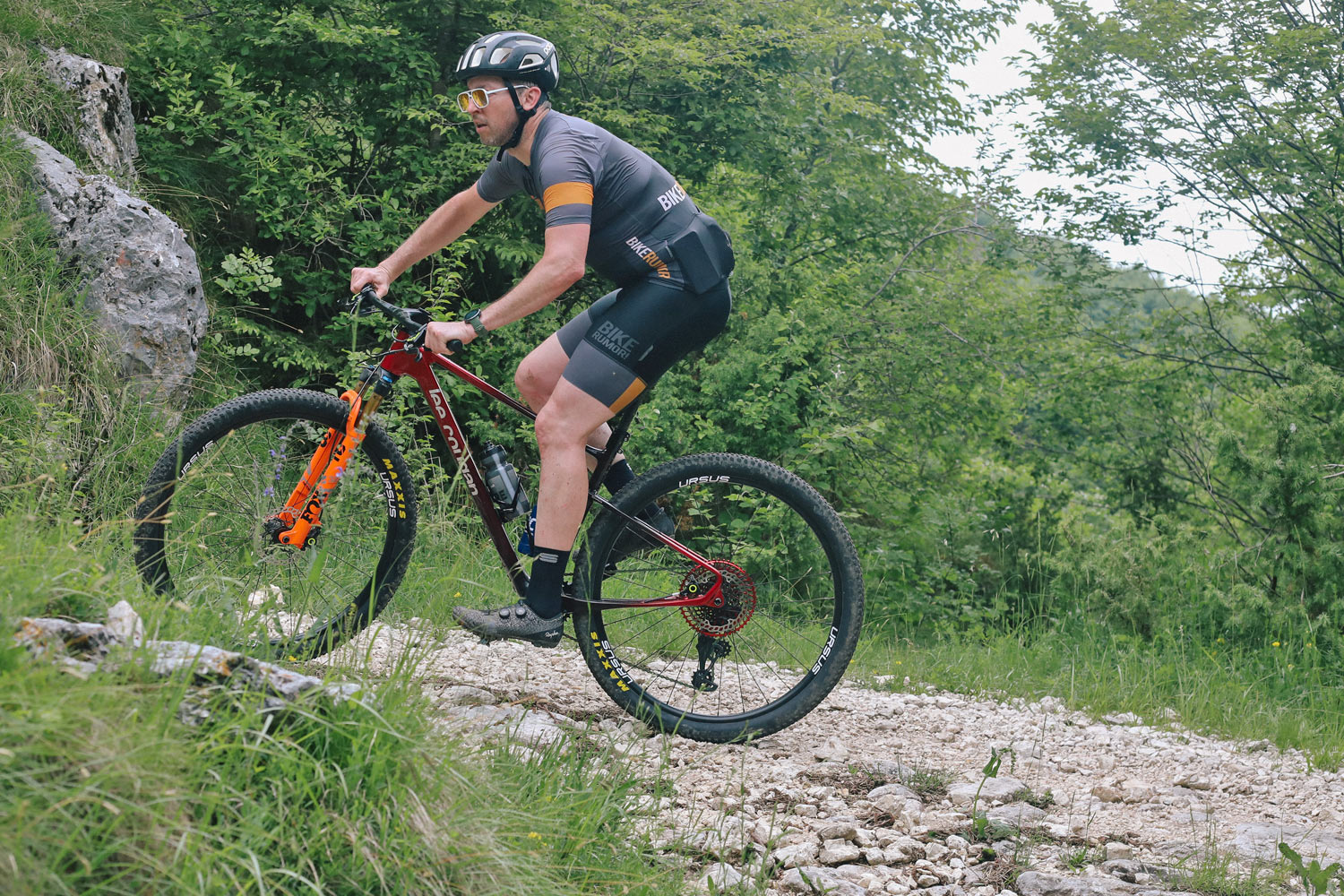 As cross-country mountain bike racing has gotten more and more technical, hardtails have almost been completely phased out of existence at the top level of racing. And Lee Cougan thinks it’s time to give the in-between bike another hard look. Their Rampage Innova climbs fast like a hardtail, but while better hugging the ground like a fully. And while 30mm of damped, tunable travel is never going to descend quite like a proper full-suspension bike, there is just enough give to smooth out some of the rocks & roots, protecting riders from fatigue over longer races.

The benefit, in the end, is you get a frame that weighs only 1300g, and a bike that costs much less than a comparable bike in a similar sub-10kg complete category.

Who is Lee Cougan again? 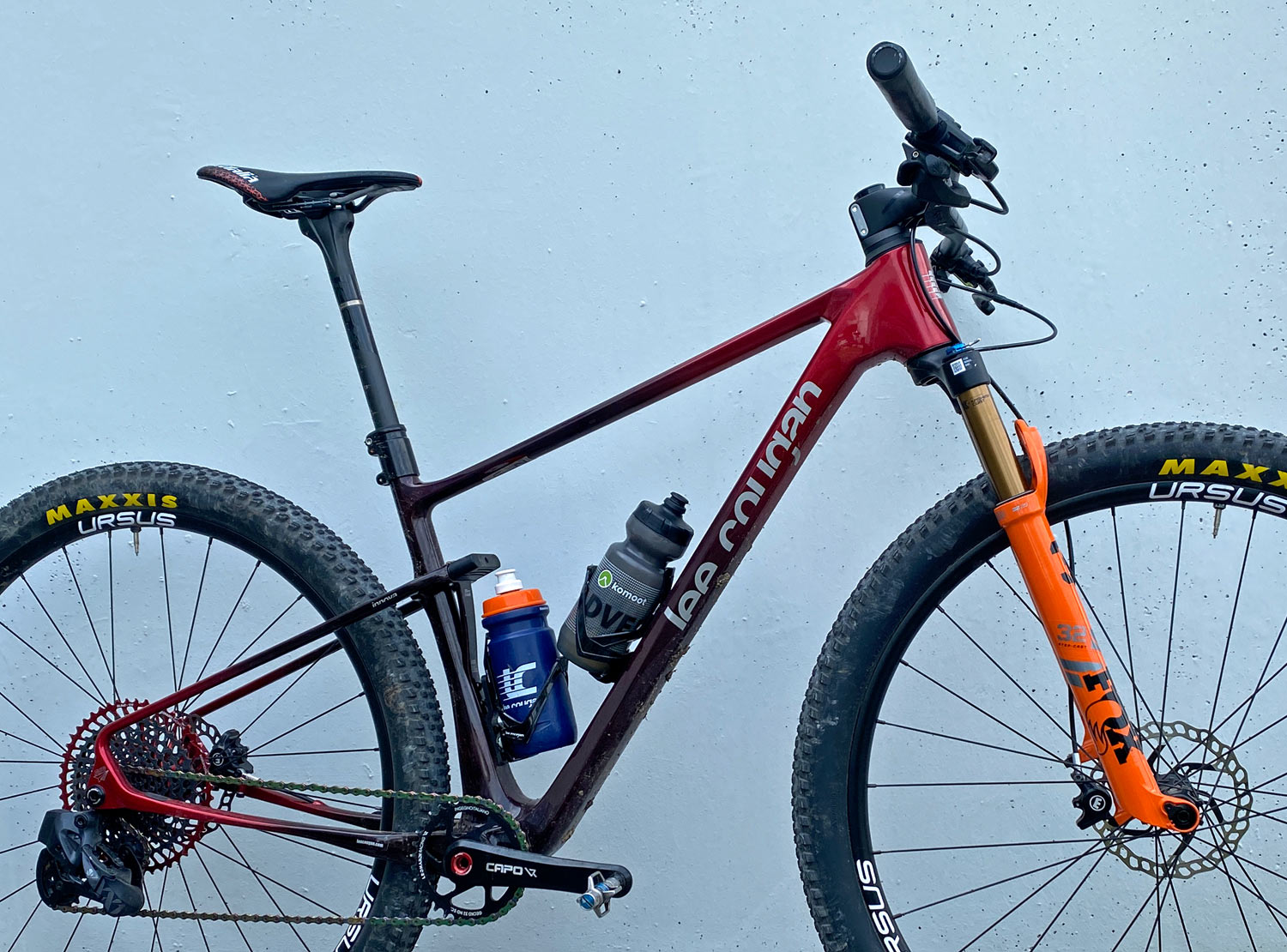 Lee Cougan is the mountain bike sister brand of Basso road bikes, all designed in the same HQ in northern Italy. Having been founded a couple of decades ago as pretty much an open mold distribution company, the last few years have seen Lee Cougan make moves to truly innovate and leverage their development prowess of crossover teams from the road. Now with the Asian-made Rampage Innova, the brand is setting the stage for a shake-up of XC race bikes. 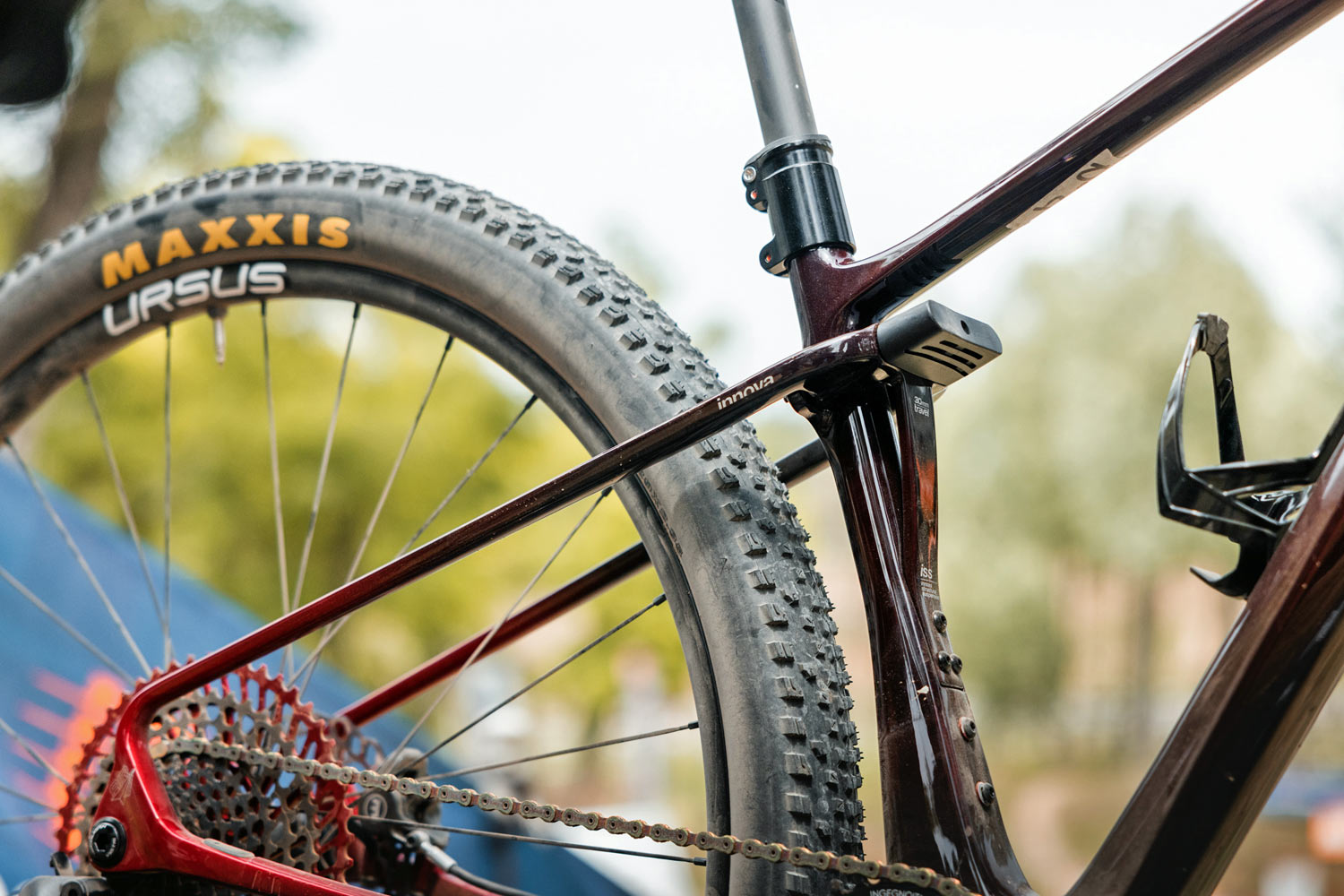 The heart of the new Lee Cougan Rampage Innova is its 30mm of pro-shop-tunable rear suspension – dubbed Innova Structural Suspension. The rear suspension spring is flex of the carbon itself, with a unique leaf spring bolted to the seattube that has frame size-specific stiffness (but is replaceable). Its damping secret hides inside of the protective cover at the end of the seatstay, with 2 tiny pressurized oil-damped shocks. 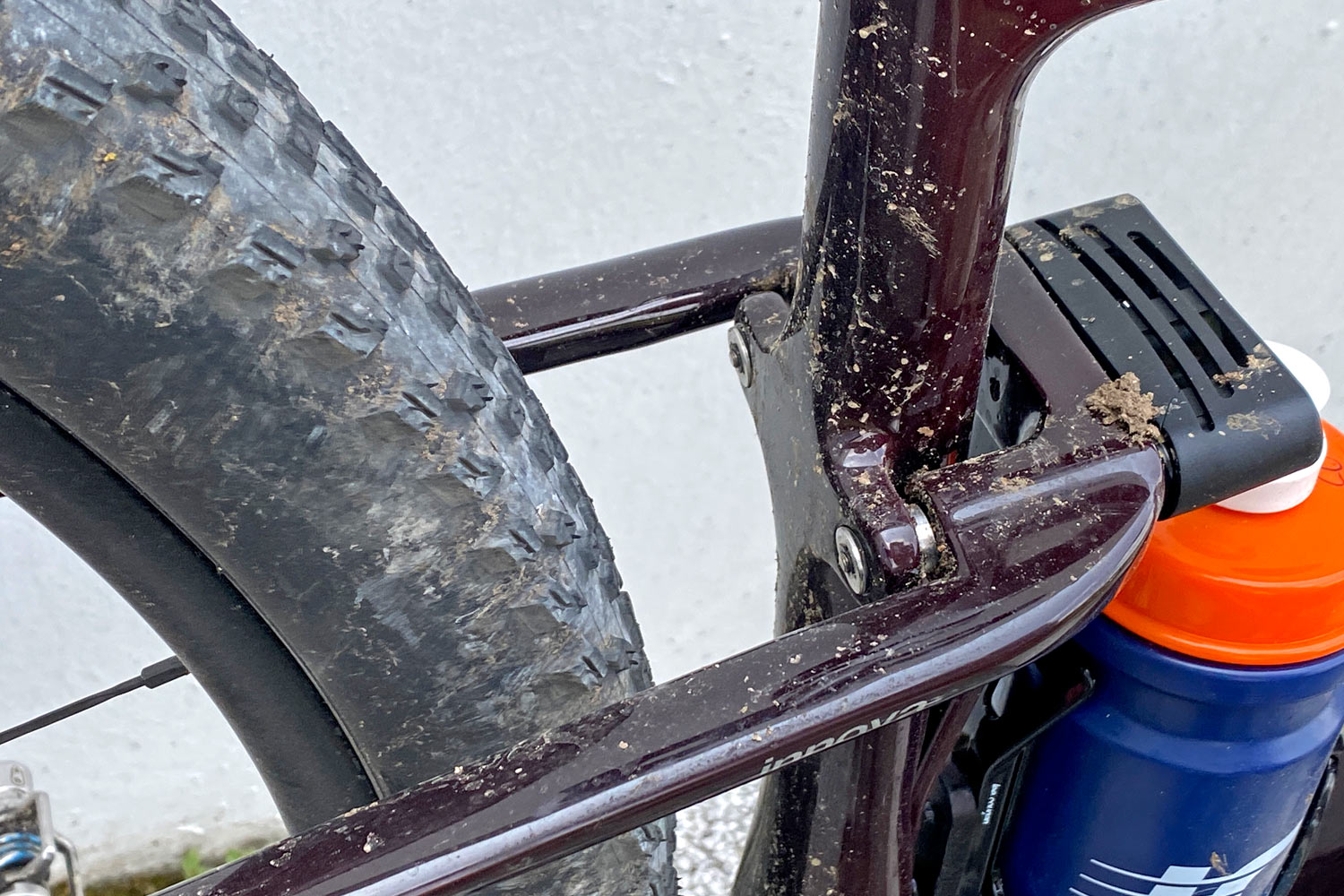 Those little shocks come preset with a damping characteristic pre-set to each frame size, with Lee Cougan saying the carbon leaf +micro damper setup is optimized for up to a 100kg rider. But the oil weight/pressure can be individually customized to each racer or even race, just only by Lee Cougan’s authorized suspension service center. 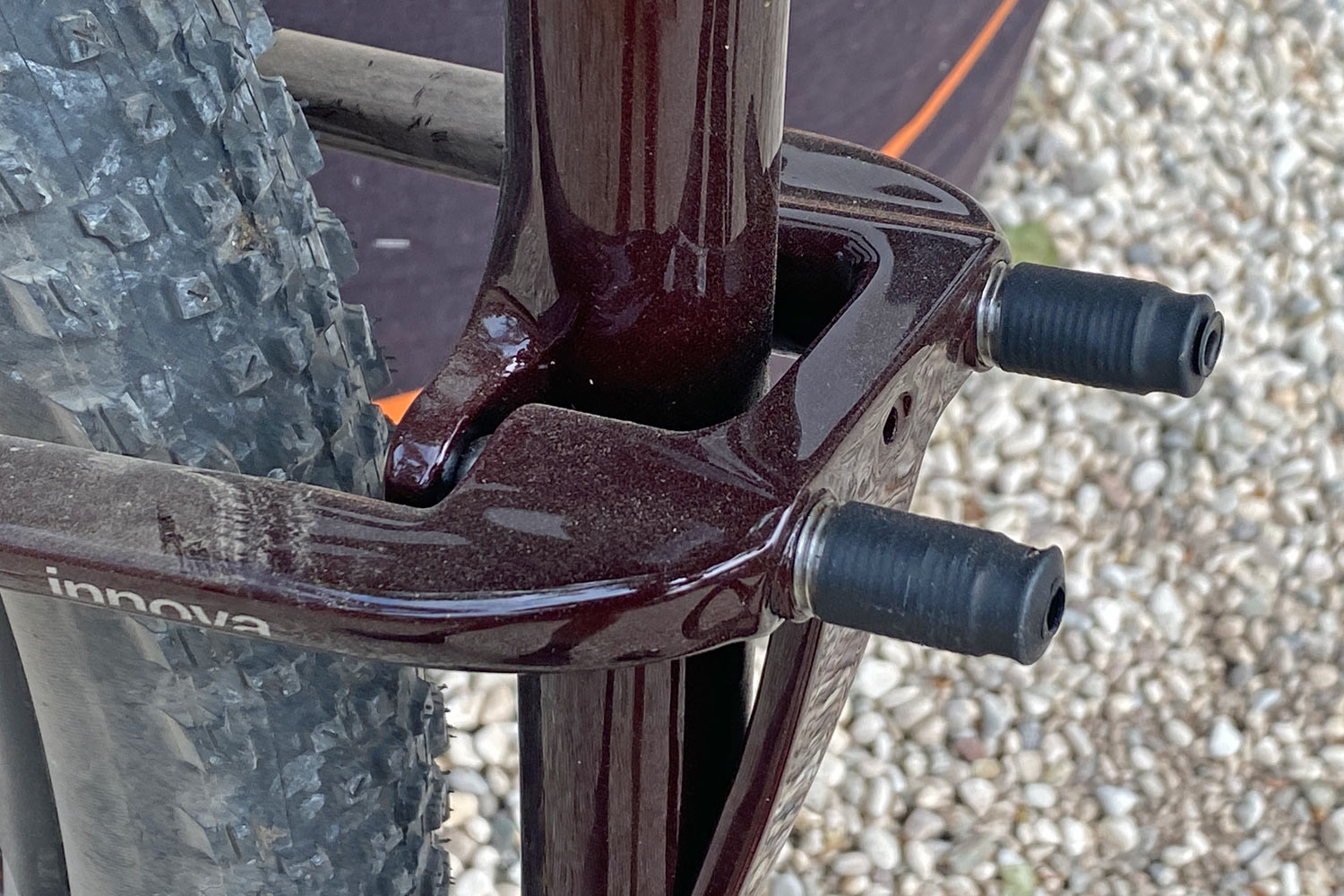 Those micro shocks inside also include elastomer bottom-out protection inside, but no top-out limiter on the return. 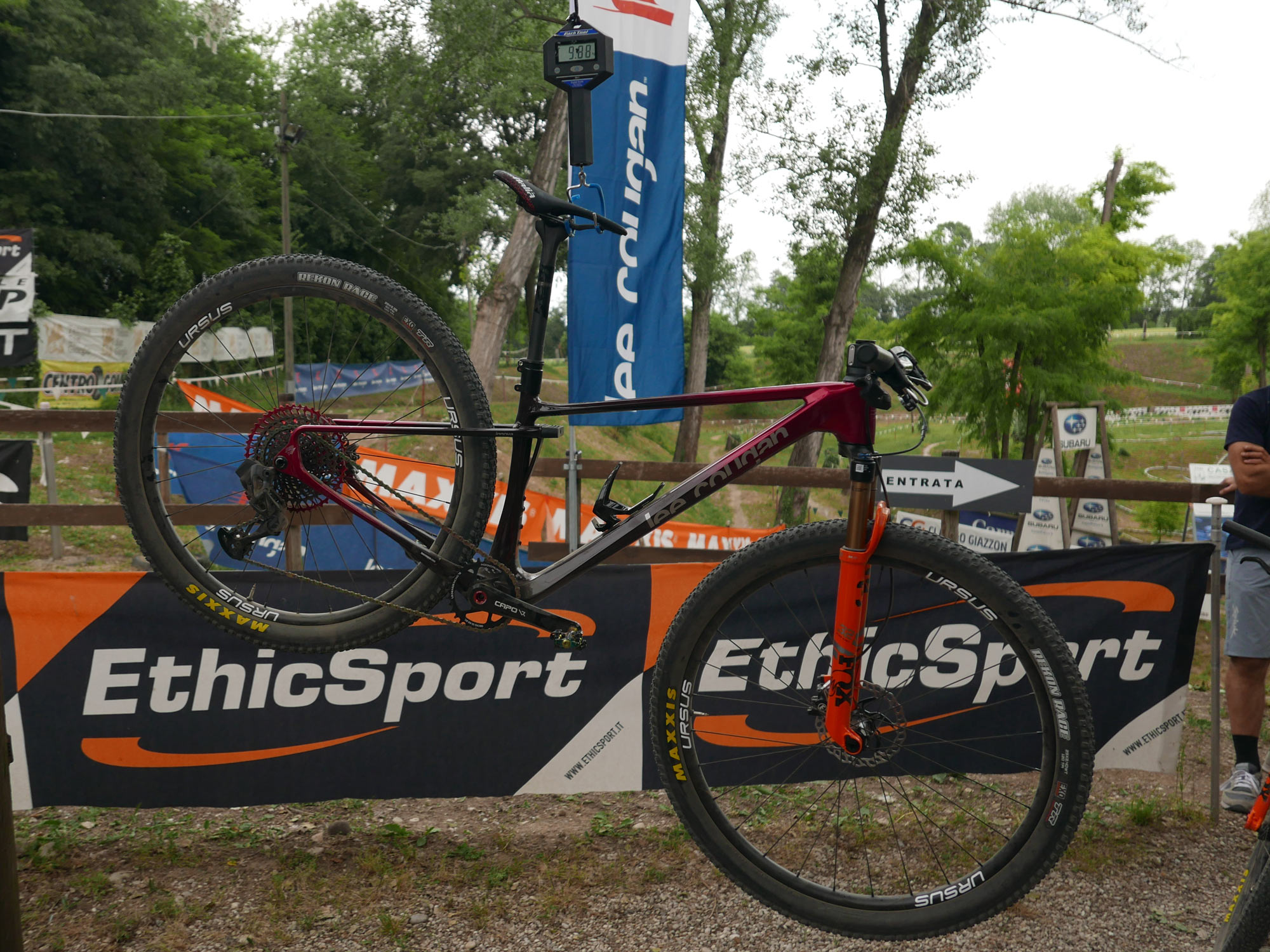 In the end, the simplified, no-pivot rear suspension with flex zones in the stays allows the weight to be kept to just 1300g (size M) and kept the same lateral bottom bracket & drivetrain stiffness as the Lee Cougan’s lightweight carbon XC hardtail. My size M test bike with pedals weighed 9.88kg complete. 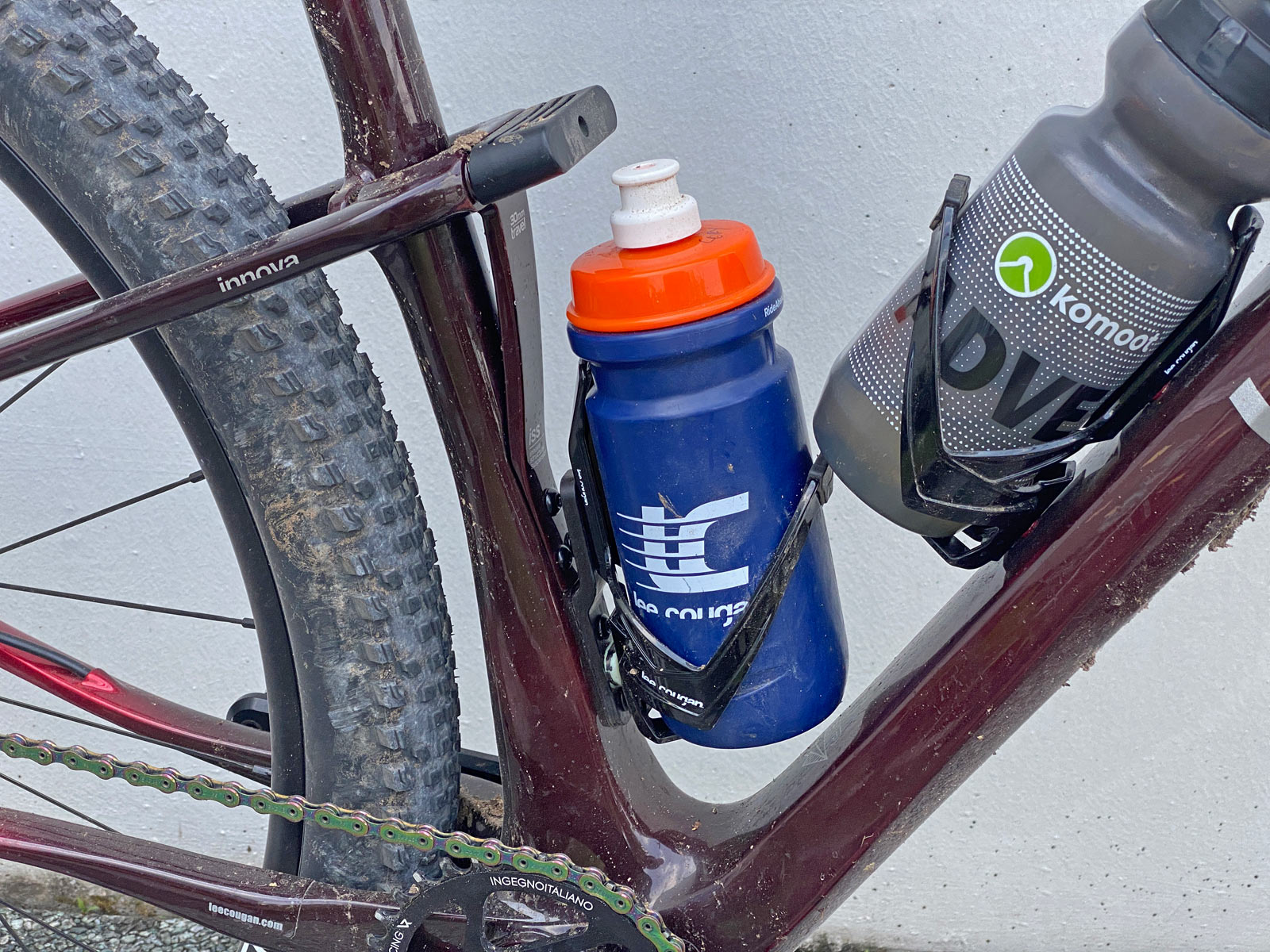 The Rampage Innova softail uses a standard boost rear end with flat-mount rear disc brake, and internal cable routing through the headset. It also uses a robust 3-bolt external seat clamp to minimize seatpost pinch force while also preventing any chance of slipping. It also has room for two water bottles, although it uses a special adapter plate to install the seatpost bottle in front of the carbon leaf spring. 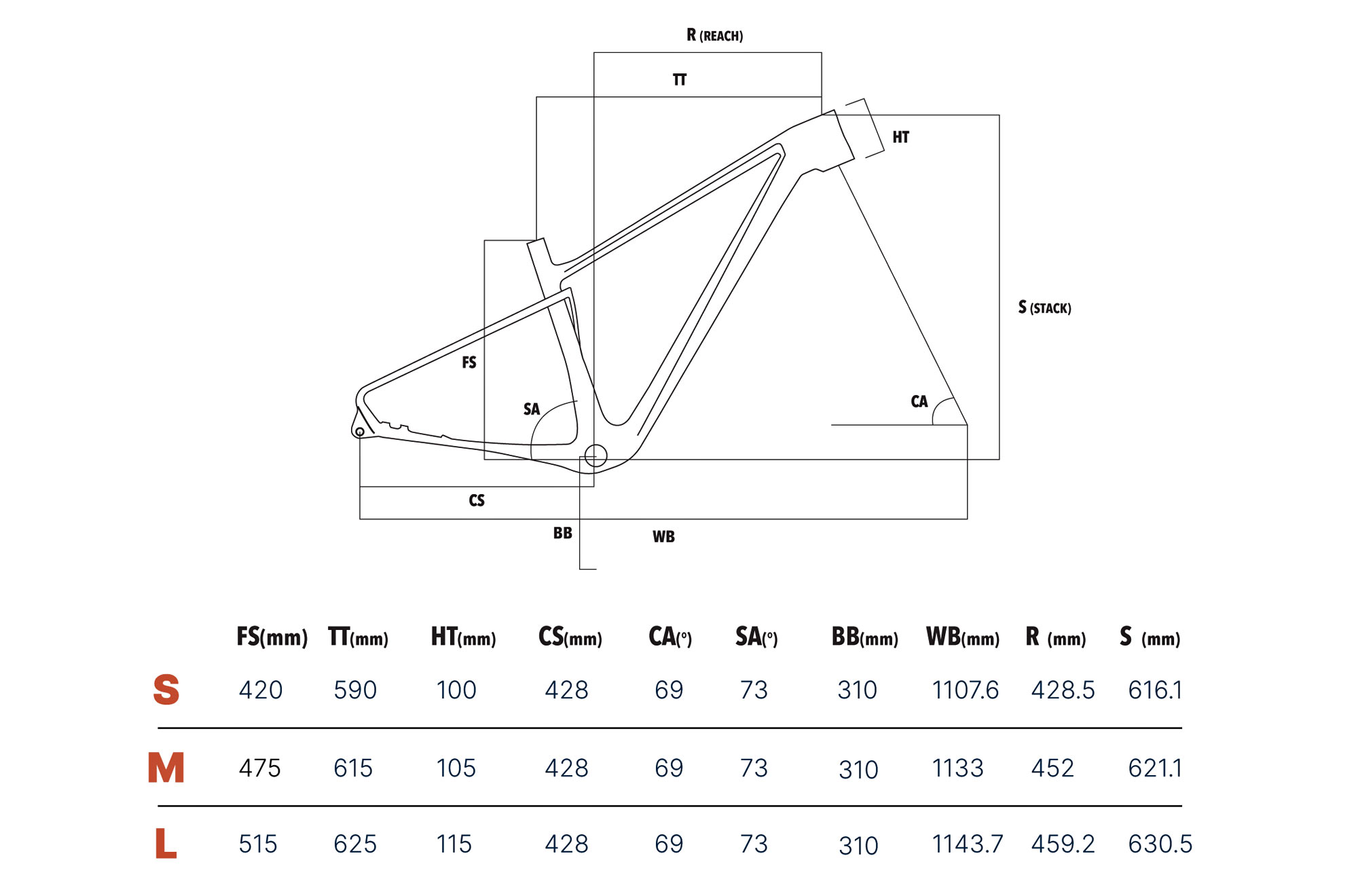 The Rampage Innova softail is a unique middle-ground bike suspension-wise, but it’s a dedicated racer when it comes to geometry, albeit with modern influence. A 69° headtube (with the stock 100mm fork) is fast handling, but still pretty stable through rough terrain. Its 73° seattube isn’t especially steep, as you already get good pedaling efficiency out of the hardtail-like rear end. And 428mm chainstays are short and snappy fast. 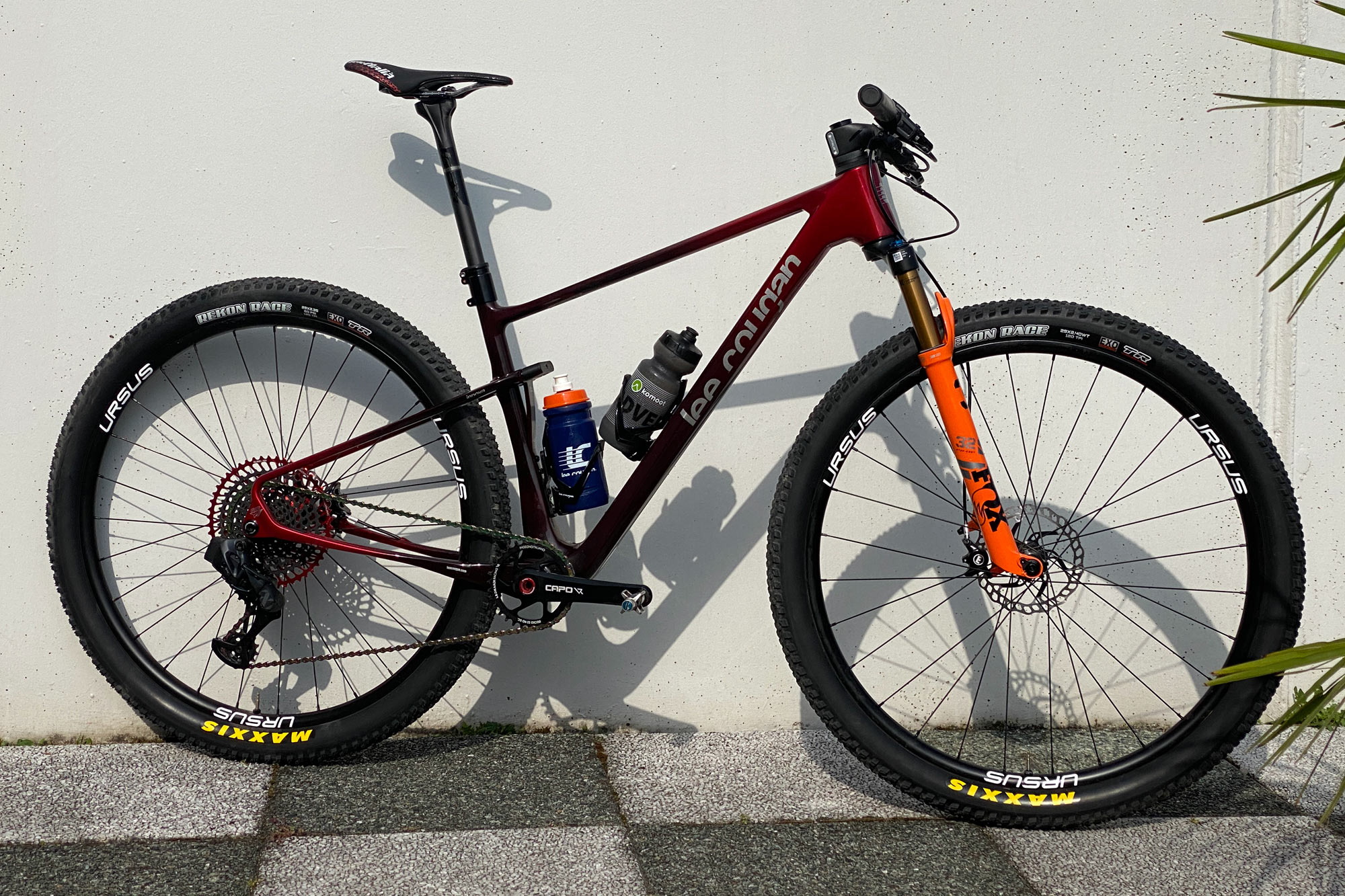 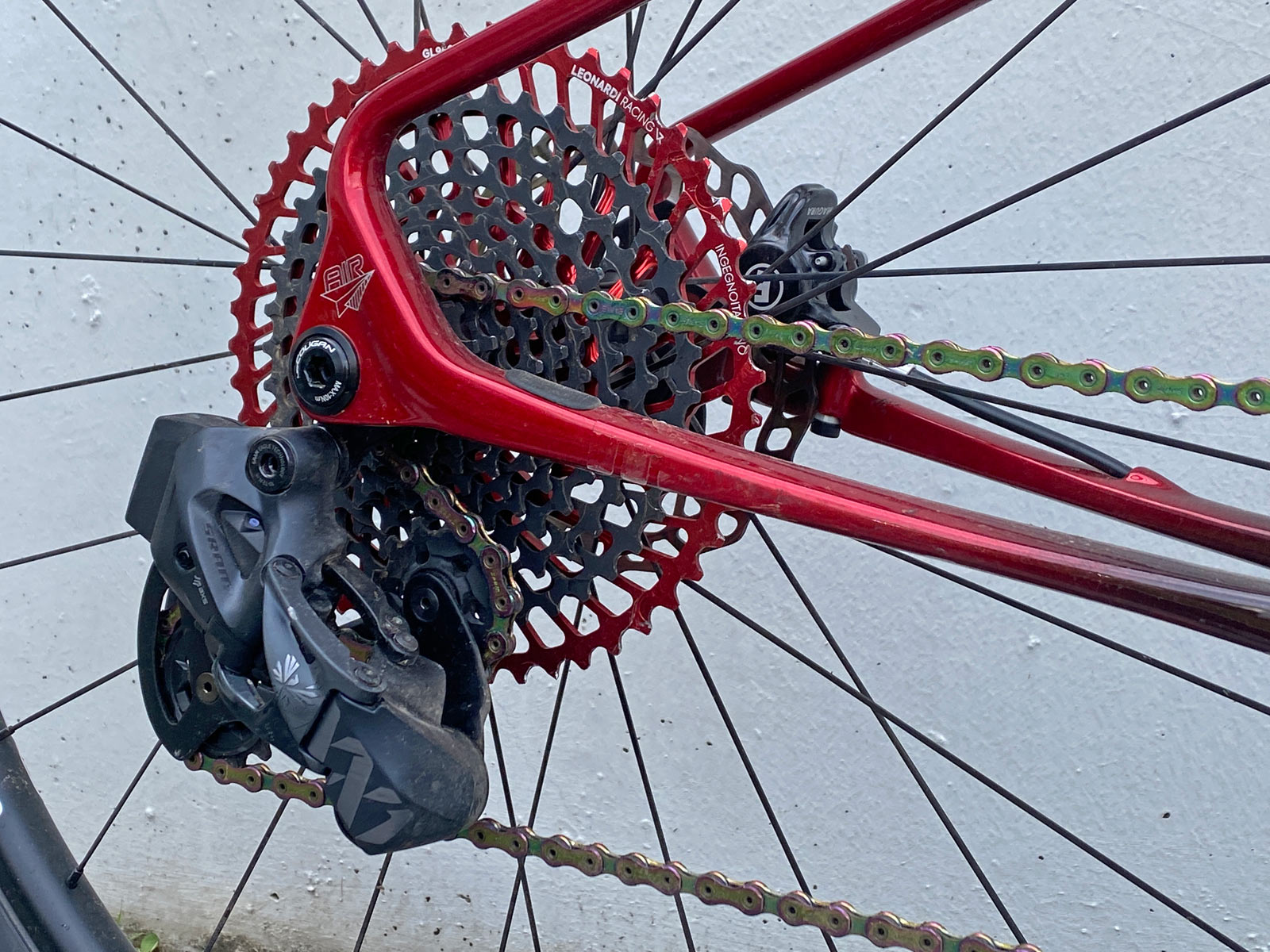 These first bikes will ship to consumers within a few weeks, and they include a free custom suspension tune with Lee Cougan’s Gallo Motto tuning shop partner. (Further custom damper tuning will cost 170€, including back-and-forth shipping of just the mini shocks.)

More bikes with complete build prices starting at 4300€ will come later in the year. We’ve also been told, that a frameset option is in the works, likely in time to build up custom race bikes for next season. 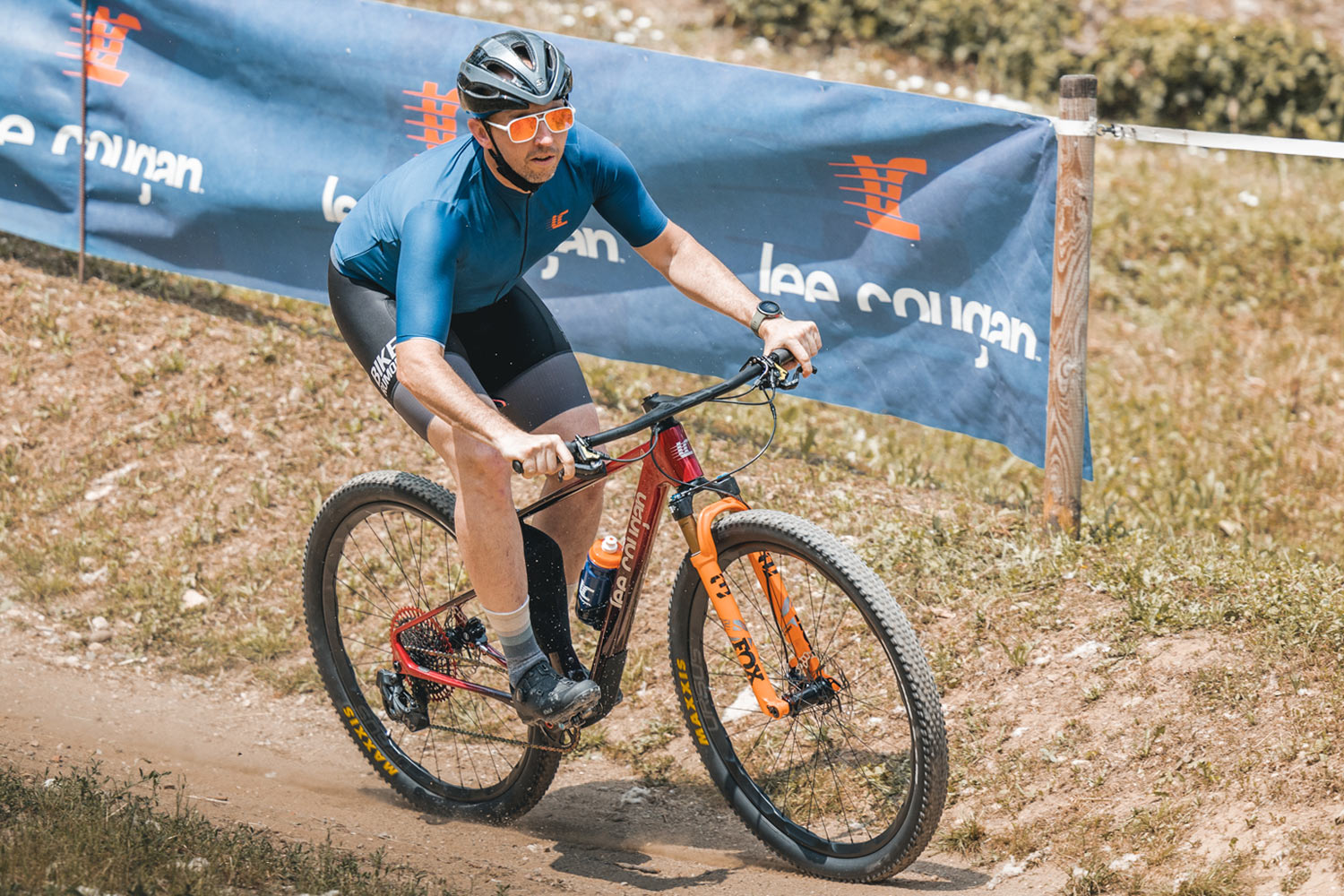 We got a chance to put in some good riding on the new mountain bike, both tight & twisty XC style racing and some longer marathon distances with more technical terrain and lots of climbing. As rider (and owner) of undamped softail mountain bikes for around two decades, the immediate impression of Lee Cougan’s new Rampage Innova is that it is truly a more refined mini rear suspension, and not the bouncy feel of yesteryear. 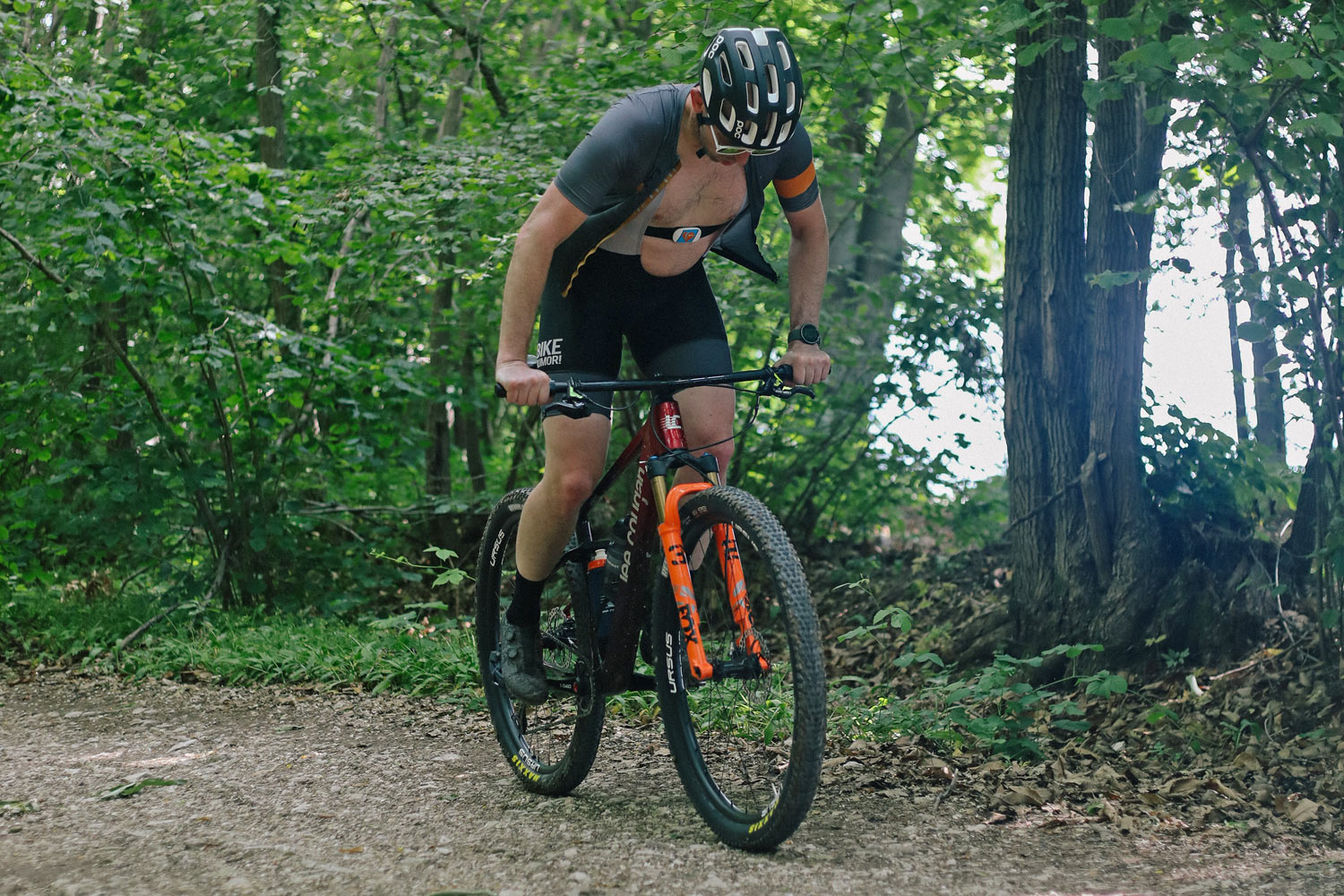 My most lasting first impressions were that the suspension felt noticeably active while seated, but the second you stood up it became a hardtail again. That meant that seated pedaling felt the biggest benefit from the 30mm of travel, but also that standing while descending chunky trails felt less like a full-suspension, even if there probably was some rear wheel travel going on. 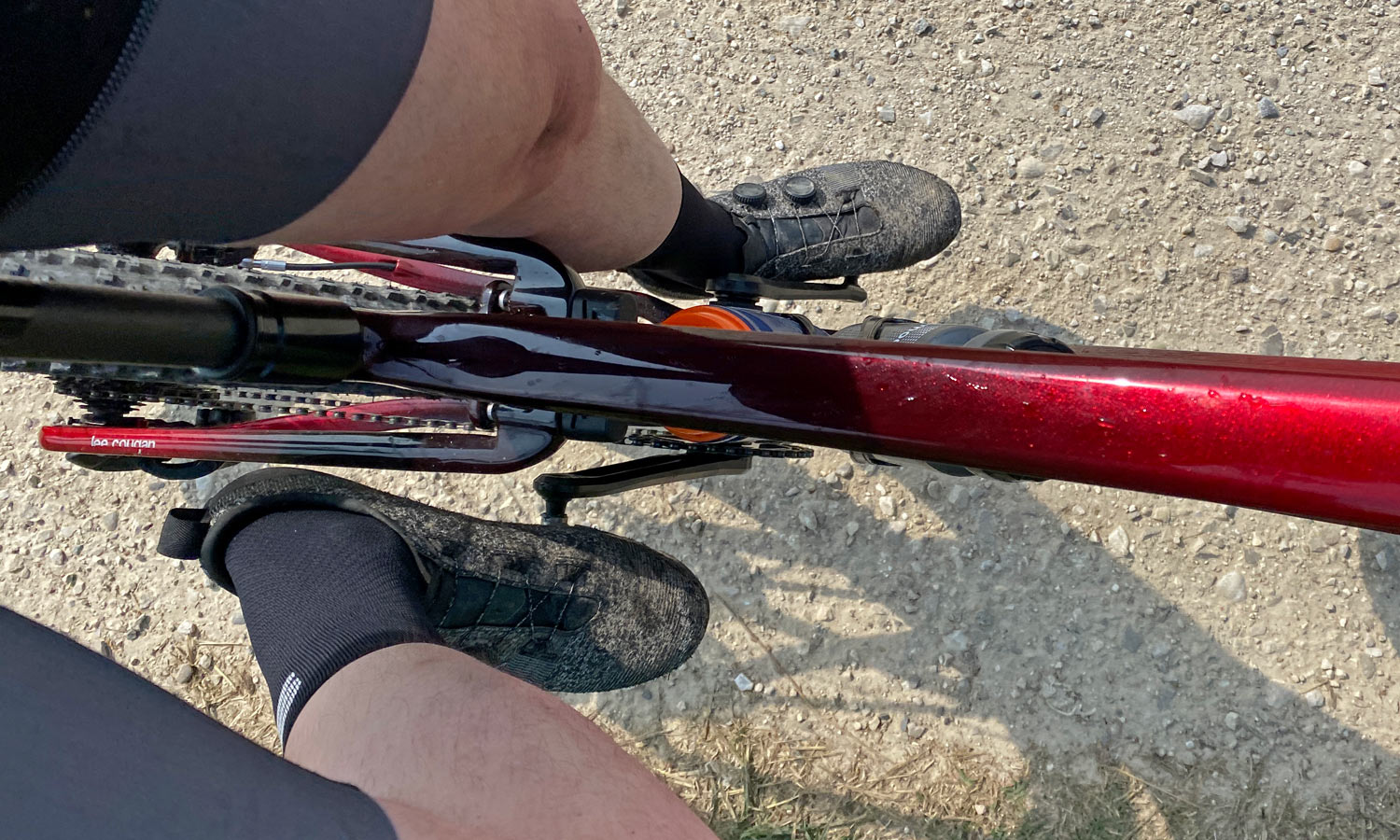 One downside depending on individual preference (and calf size), the wide-set seatstays & ISS layout that give lateral stiffness also rubbed by legs a bit while pedaling. It wasn’t enough to bother me, but I’m sure some riders would mind. 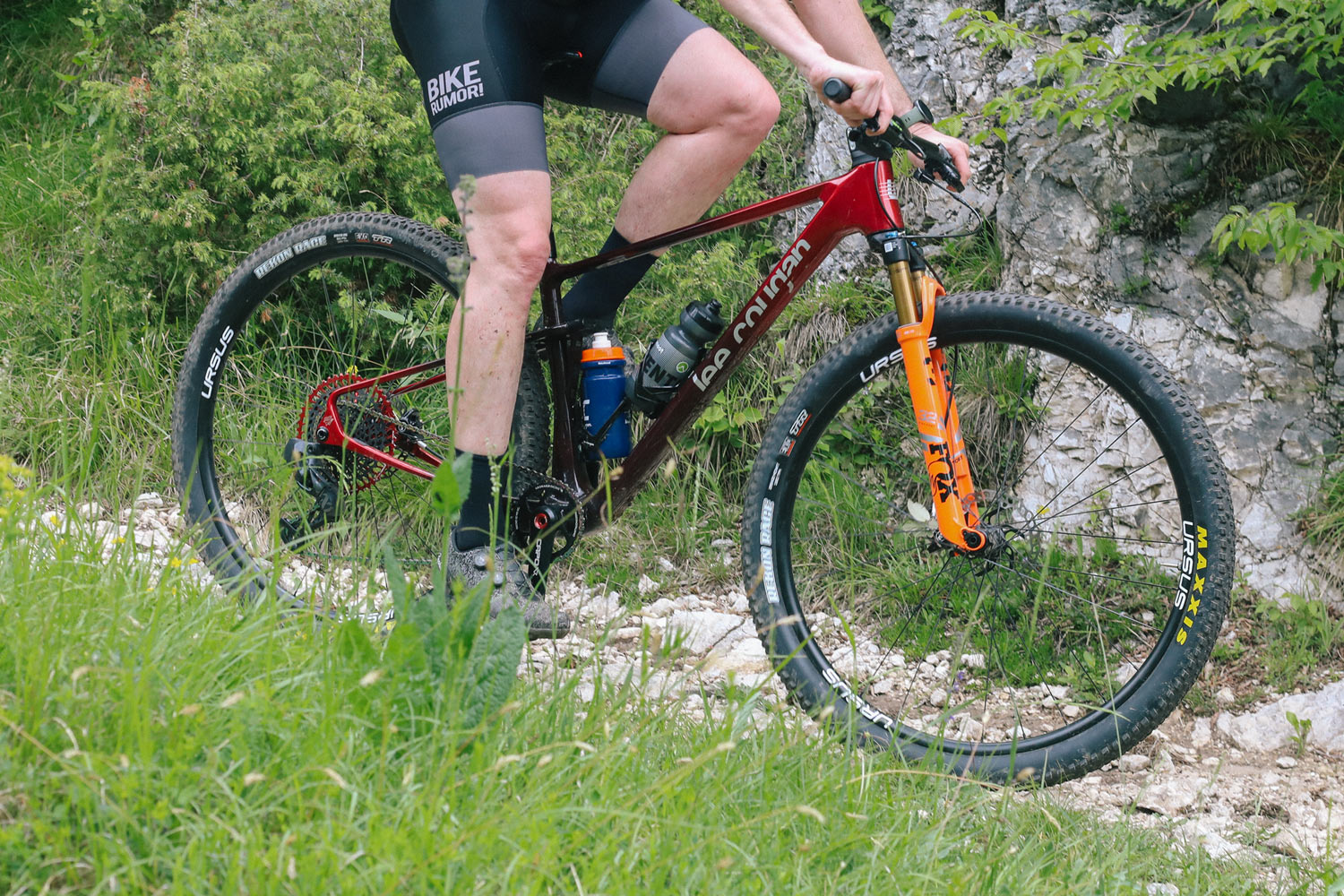 It really does climb like a hardtail, and keeps the rear wheel hooked up over rougher surfaces, taking a bit of the buzz out of bumpy rides without ever feeling like you actually have rear suspension.

this would make a great gravel bike. Perhaps they’ll do a frame with geometry for drop bars one day.

Great concept, but that calf and heel strike issue would annoy the crap out of me.

I would rather have a dropper on my HT than an inch of suspension. Way more helpful in technical terrain

Why not have both 🙂

You can have both

10kgs? Without a dropper! Shame

Reminiscent of the old Turner Stinger, in terms of frame design!

tester is a big boy

@Tyler… Sure, at 84kg and 185cm tall, I’m no XC racer lightweight. And 9.88kg with pedals, sealant & a bottle cage it’s one of the lightest mountain bikes I’ve swung a leg over in years. I’d probably still sacrifice another 200g to swap in a light dropper post, though.

No. He’s a standard size adult. He’s the same size I was in 8th grade.

Looks like the tester is making a bit of a meal of the calf and heel rub. It’s no different than most full suspension bikes. If it is a problem then pedals with wider Q factor or a crank with longer spindle can assist but I’ve never seen anyone pedal with their feet point outward as severely as depicted