The Vuelta a Espana Stage race starts tomorrow August 28th, and will conclude on Sunday September 19th, with every stage available live on Universal Sports. Watch as many of the big names like Andy Schleck, Denis Menchov, Tyler Farrar, and Mark Cavendish duke it out in one of the years last big stage races.

Live coverage is available in one of two ways, TV and Online. Coverage will begin each day at 10 am ET, with the exception of the race opening night Time Trial through the streets of Seville on August 28 at 3:30 pm ET.

Have DirecTV but not Universal Sports? Good news there, as DirecTV is making Universal Sports Coverage of the Vuelta a Espana available free of charge to any DirecTV subscriber, just tune to channel 604. Otherwise check with your local cable provider to see if you get Universal Sports, or if it is offered.

Universal Sports will also be hosting the Grand Tour Giveaway, where by predicting the stage winners you could win a trip to 2011 Vuelta, a Giant Defy 1 Road Bike or Authentic Vuelta Red 75th Anniversary Jersey.

Check out the anniversary jersey after the break. 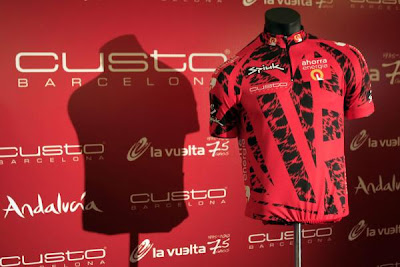 August 25, 2010â€”Los Angelesâ€”Universal Sports will broadcast live, comprehensive coverage of every stage of the Vuelta a Espanaâ€”an unprecedented more than 176 total hoursâ€”beginning this Saturday, August 28 at 3:30pm ET, with Universal Sportsâ€™ 2010 Vuelta Preview Show, followed immediately by the start of stage 1 LIVE from Spain at 4:00pm ET.Â  Coverage of the third and final Grand Tour of the cycling season continues everyday at 10 a.m. ET throughout the three-week race, where Universal Sports will follow the riders through all 21 stages until the finish in Madrid on Sept. 19. On both rest daysâ€”September 6 and 14â€”Universal Sports will present special Vuelta Recap Shows at 10am ET. The network will also present primetime re-airs nightly at 8pm ET.

The 2010 Vuelta a Espana, which will be celebrating its 75th anniversary, begins in Seville, Spain, on August 28, and ends 22 days later in Madrid. This yearâ€™s race will kick-off for the first time with a night-time 16.5-kilometer team time trial through Sevilleâ€™s most iconic neighborhoods, while crowds of spectators gather to once again follow this exciting and vibrant three-week Spanish race. As usual, the course favors aggressive riders who perform well in the mountains. There are four mountain-top finishes, including two new climbs, Cotobello and La Bola del Mundo, and an extension to Navacerrada, which comes the day before the finish and will likely be a deciding factor in the quest for the top spot.

This yearâ€™s Vuelta boasts an all-star field including Tour de France runner-up Andy Schleck, who will be aided by brother Frank Schleck in his quest for the top podium spot. Other stars include Denis Menchov, Carlos Sastre and Roman Kreuziger who will fight it out for the General Classification win, while American Tyler Farrar is hoping to challenge Mark Cavendish, a winner of 15 Tour de France stages, for the overall sprinterâ€™s title. Other fire power at the finish line will come from former World Champion Oscar Freire, Thor Hushovd and Alessandro Petacchi.Â Cycling pundits are eyeing two-time Vuelta winner Menchov, who was third overall at the 2010 Tour de France, along with Andy Schleck, as the strong favorites for the overall victory.