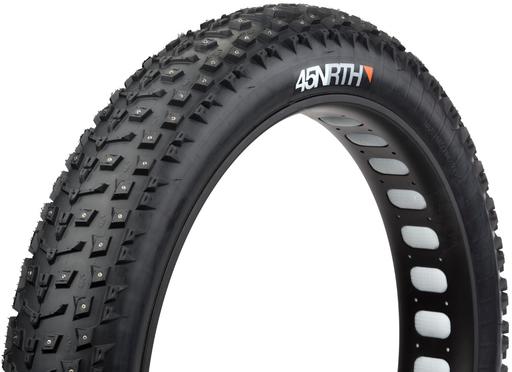 Here in Minneapolis, yesterday’s wallop of snow is a reminder that winter isn’t over just yet, and neither is fatbiking. Hoping to provide even more high quality tire options to the fatbiking public, 45NRTH has taken the wraps off of their biggest tire yet – the Dillinger 5. Based on the popular Dillinger studded fatbike tire, the Dillinger 5 is understandably 5 inches wide offering a studded tire choice for the newest ultra-fat bikes.

You’ll have to wait until this Fall to get your hands on some, but you can get the details after the break! 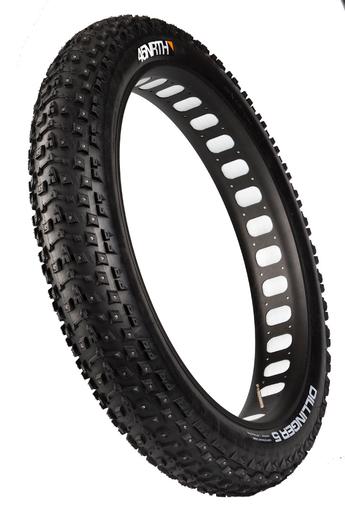 Even though the Dillinger 5 is technically a larger version of the 4, 45NRTH didn’t just stretch out the tire to fit. The 5 uses a slightly different tread pattern to give the larger tire improved grip to go along with the additional flotation and traction. Starting at the center of the tire the tread blocks get progressively taller as you work towards the shoulder of the tire which makes for a more squared tread profile. The center tread is kept low and tight for improved rolling resistance, while the paddle treads are widened for better grip in the snow. 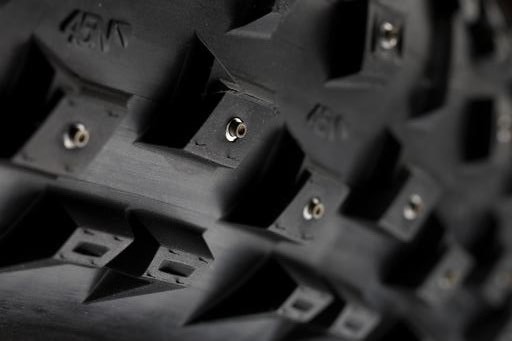 Like the current Dillinger, the 5 will be offered in both a studded and studless tire that you can stud your self. in the case of the 5, both versions use a 120 tpi casing and will sell for $250 for the studded and $175 for the studless. Unlike the current Dillinger though, the 5 makes use of the new 45NRTH’s exclusive concave stud design. We got a first look at the new studs at Saddle Drive where David Gabrys explained that the concave studs offer twice the amount of bite in the ice thanks to the additional edge. To validate the concept David and team have been testing the studs on an indoor ice rink for months now, and are “astounded by the additional traction and control they offer. The studs consist of the concave carbide tip which is attached to an aluminum base that is pressed into each lug. 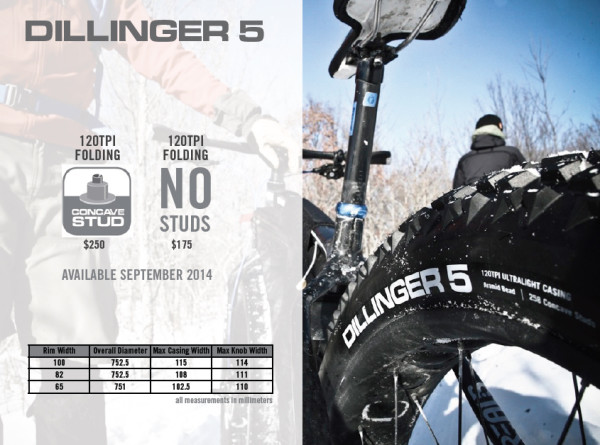 We’ll see if we can get some real weights while we’re here at Frostbike!

If you want studded fatbike tires any given Winter, order early…

Bound to be gone mid September.

Will the new stud design fit in the old dillingers? Sounds like just the tip of the stud has changed…. hopefully. I have waiting for studs for a couple months now, but if there is something better in the pipe will hold out longer.

Luv, the dillingers, great tire. Not sure I need it fully studded and if the new ones are that much better might be able to get away with a lot less. On days you need that many studs in maine, you can ride a studded skiinny bike and have more fun. (yes blasphemy to the fat bike religion crew).

Disappointed in the size 115mm does not even come close to 5″. Hopefully it’s pretty light.

Cheap at 1/5th the cost, wowzers its getting to the point where its cheaper to drive a car than ride a bike!

Good grief, I cannot believe the price of these tyres. Completely agree with DougB, I am so lusting after a fat bike but this is the first time I thought maybe not. A fat bike in my estimation was a hardy low maintenance bike where as I’d be afraid to take this out for fear of getting a torn tyre….

I’ve got a fatbike. And even after the crazy amount of snow we’ve gotten in Minnesota this winter, the bike seems like a luxury item. There have only been a handful of days where I felt like I needed a fatbike and even on those days it still seemed like an agonizingly slow and boring ride. I can’t imagine why anyone would want a 5″ tire unless they are either masochistic, a gear whore, or really enjoy doing boringly slow sit and spin sub 10 mile rides. With $175+ tires, this whole sub genre of bikes seems like it’s going the way of the dentist anyways. I think the appeal of the fat bike rests in a group of social weirdos, you know the ones that play magic and work in IT, may have even worn a duster jacket in high school, that want to get off the “beaten path” and go where no one else has gone because they haven’t the social skills to remain on the path where others are. You know what I’m saying. Next time your out on the trails try to contain your laughter as the herd of socially awkward fatbike dorks cross your path.

some words from vendor:

It will technically be a 4.7 measured distance of outside to outside of widest lugs.

I don’t like mine. I find they don’t measure at the full width, and the weight is ridiculous at 1.5 Kilograms each. They sell for $300 near me (the store marks them at $299 as a laugh).

I feel ripped off. The ice days that these actually make a difference on are better off with a 2.35″ regular bike: you can ride twice as fast and have a blast.

Skip em, they’re for librarians who commute to work via rails to trails. Not for us trail riders.