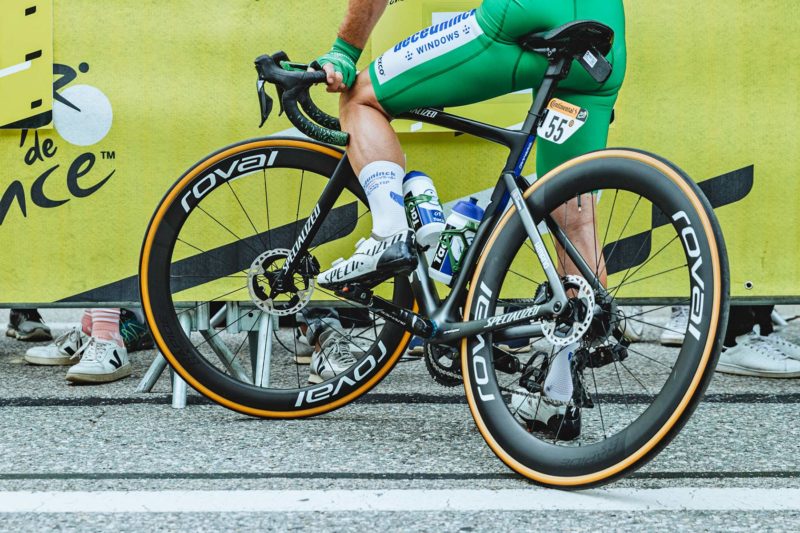 Can we just take a quick moment to appreciate the renaissance of super sprinter Mark Cavendish at this year’s Tour de France, and take a look at the subtle green highlights to his multi-stage winning Specialized S-Works Tarmac SL7? While we’ve covered plenty of Cavendish-related tech over the years, some flashy & some subdued, it’s been six years since we’ve seen him in a Bikerumor headline, so it’s nice to see the Manx Missile back in action, and riding a new Tarmac with just a dusting of green, since there’s already plenty in his head-to-toe kit… 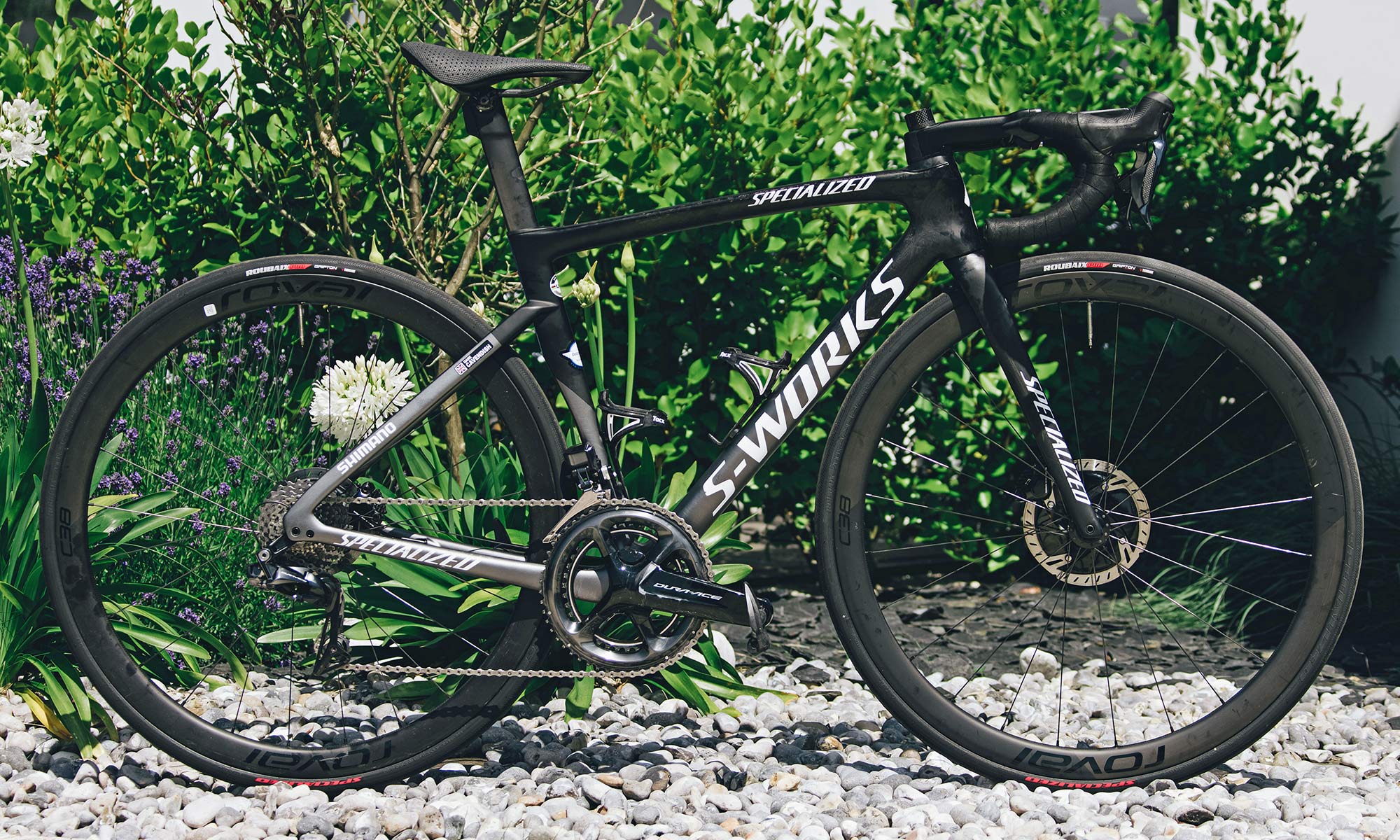 Specialized already offered up a close look at Cavendish’s standard team bike at the start of the Tour – along with the rest of the heavy hitters on his Deceuninck – Quick-Step squad like World Champ Julian Alaphilippe. But to be fair, I didn’t expect Cav to come back with such form… maybe a stage win, but now 4 (and still counting?) didn’t really seem in the cards. 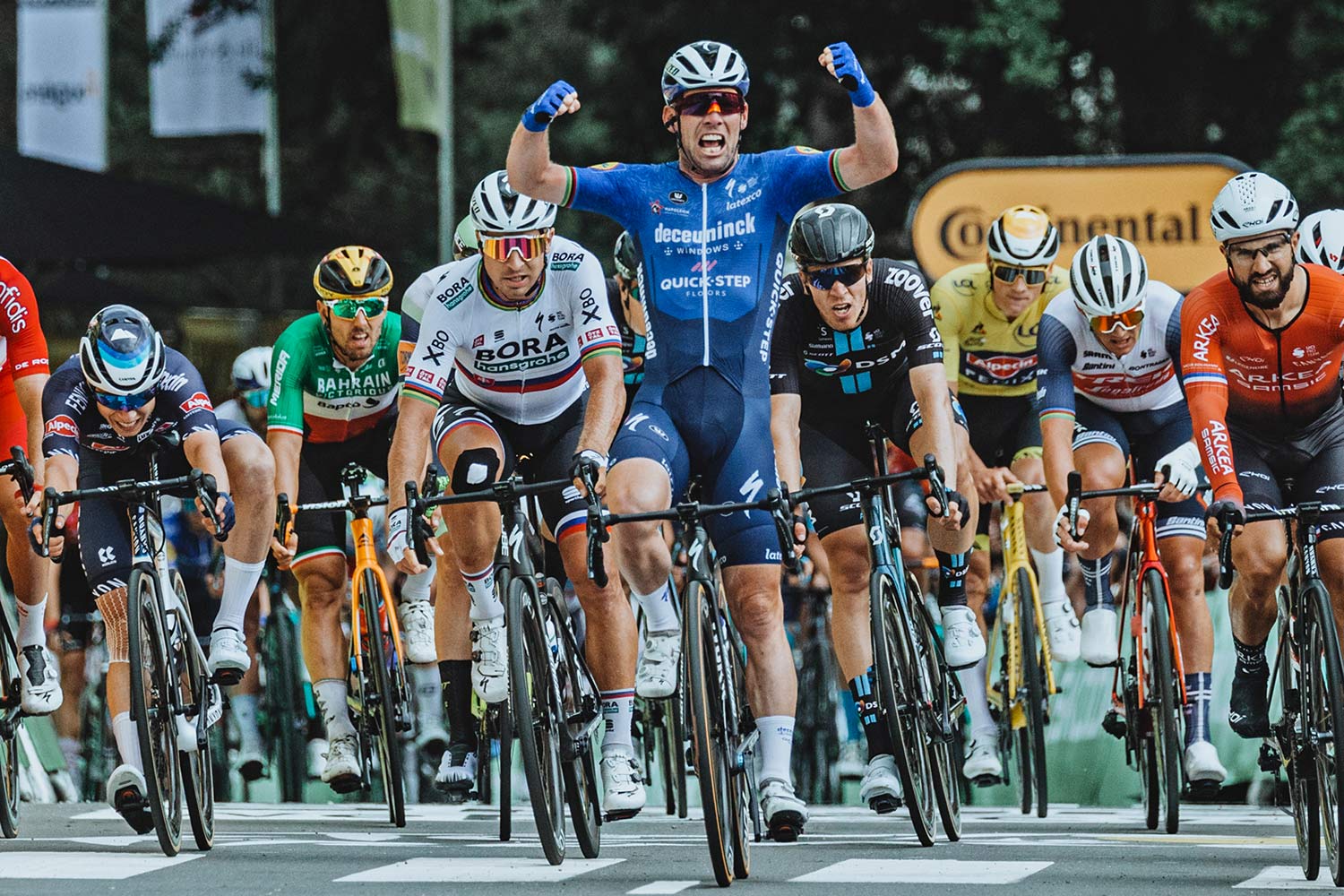 Instead, he kicked it back off on Stage 4 with the upset win in his return to Fougères. 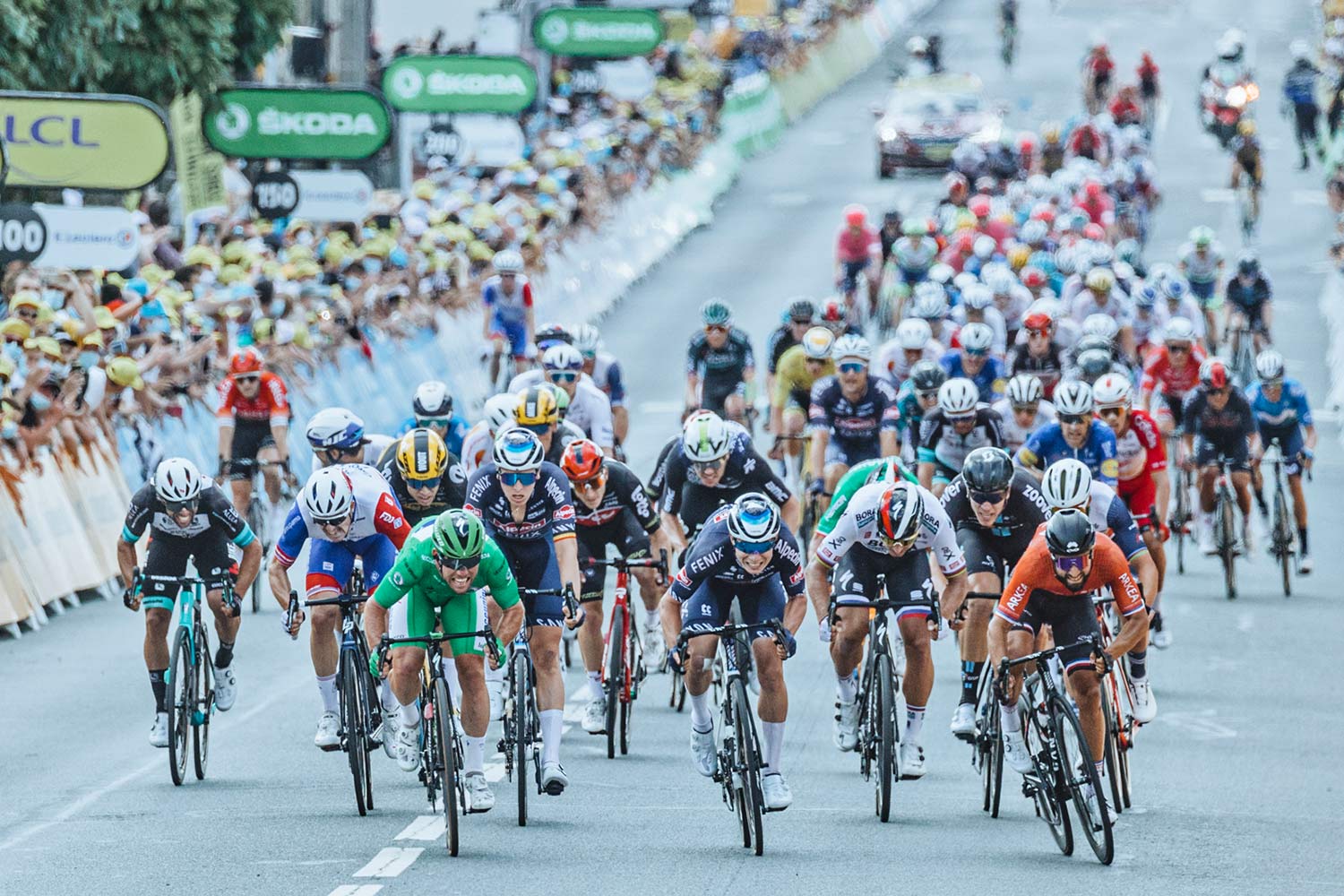 Then, again a couple of days later on Stage 6 in Châteauroux with another bunch sprint win. 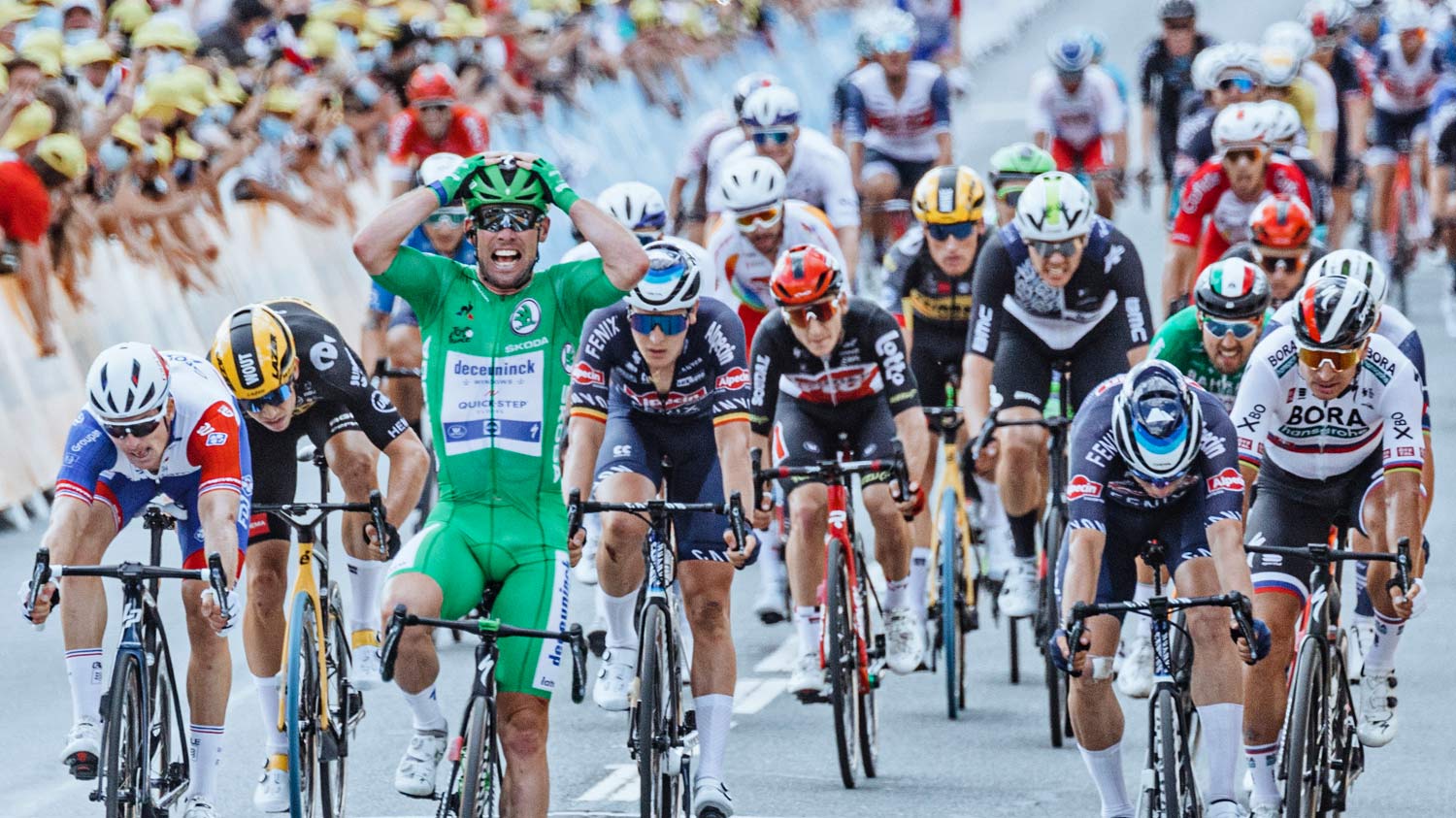 His face at the end of that stage is just great, already winning again in green and still so excited, while the rest of the bunch is still suffering from their getting beat out on the line again. 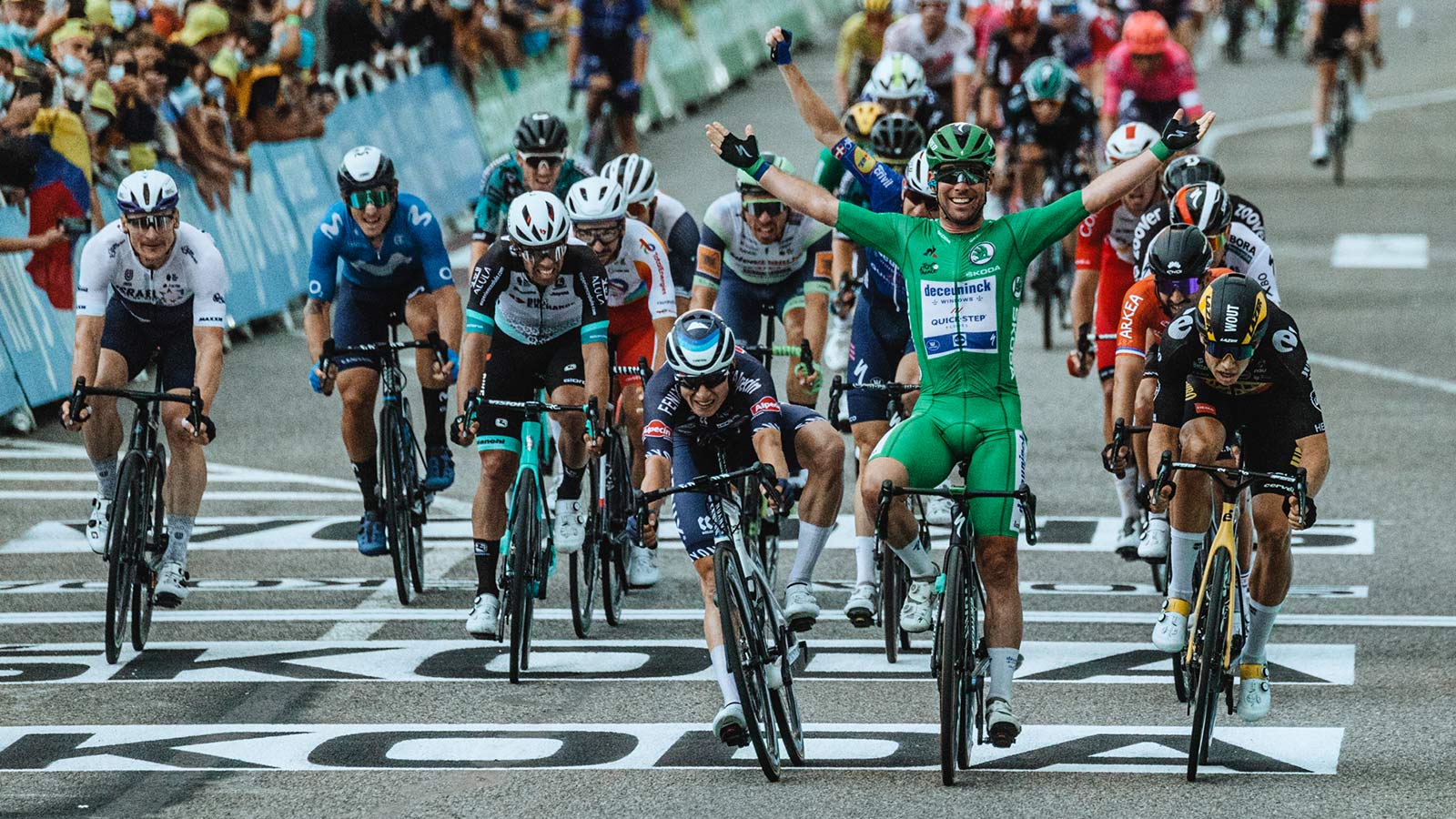 Then, after a few days break, again the Manx Missile is crossing the line first on stage 10 in Valence, at this point so chill he’s making it look easy.

OK, so we’re not going to devolve into race coverage, but the first couple weeks of this tour has certainly been entertaining… not to mention checking-in daily with that wild man Lachlan Morton who’s already ridden/bikepacked 4000km unsupported across France,  almost half the time in sandals on flat pedals, and sleeping in a bivvy by the side of the road for his Alt Tour.

Anyway, back to the tech… 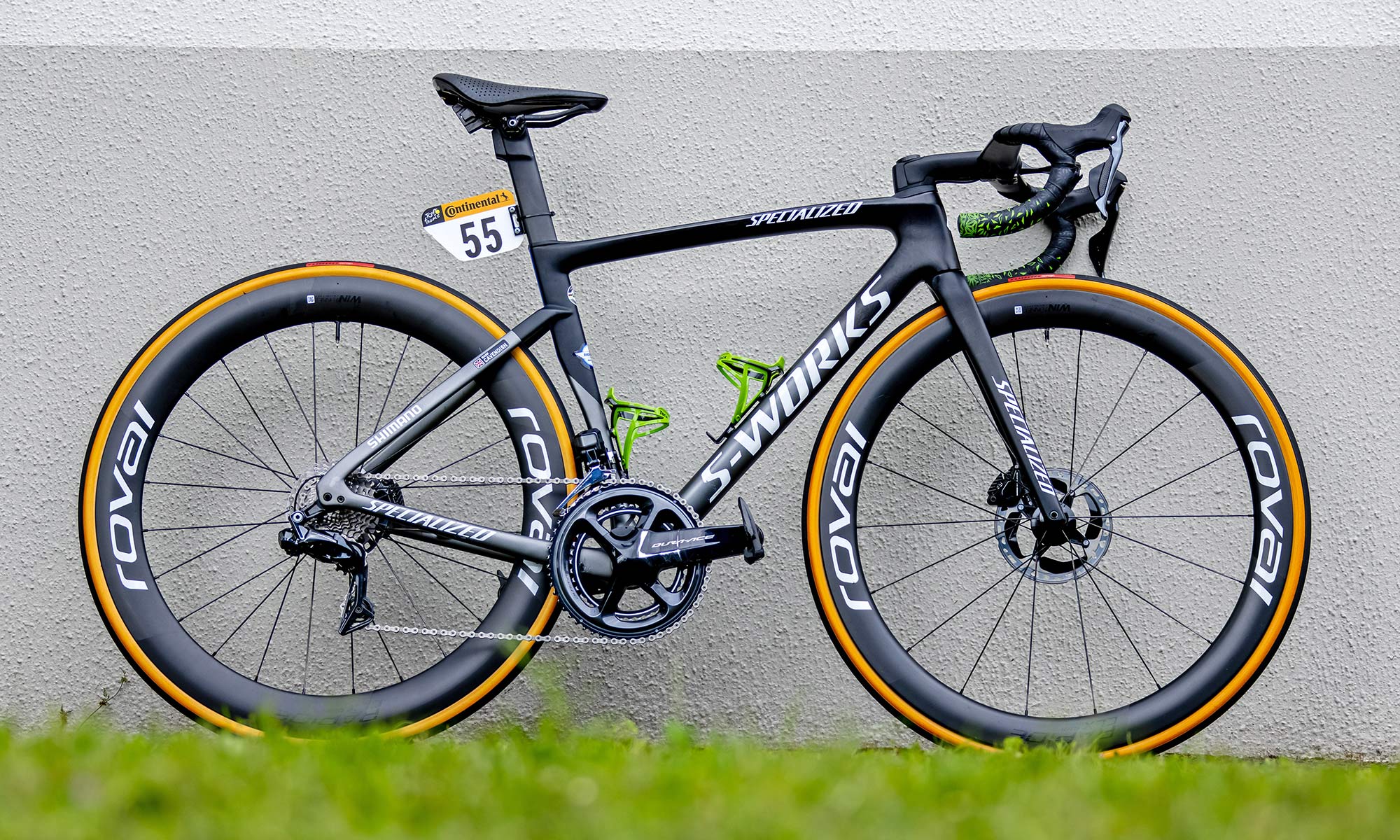 Cavendish’s standard team Tarmac SL7 frameset itself hasn’t been touched actually since he put on the green jersey (or rather, the green skinsuit). While the previous team image (at top) showed his bike set up with training tires, this one has him back on the race-ready (race-winning!) setup of 21mm internal Roval Rapide CLX carbon wheels with Specialized Turbo cotton tires, and tubes inside. 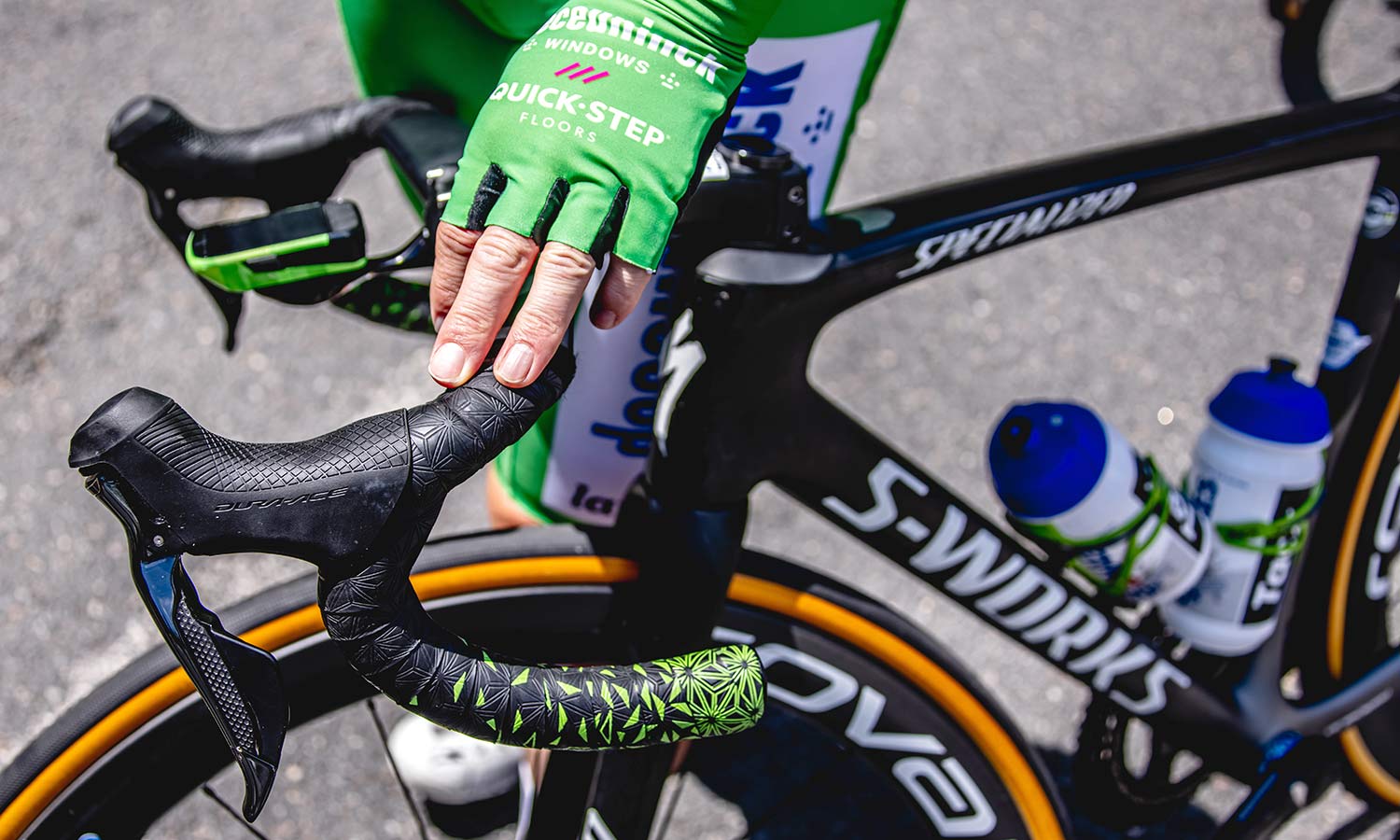 That’s it. The skinsuit, gloves, helmet & Oakleys provide plenty of green to be seen. 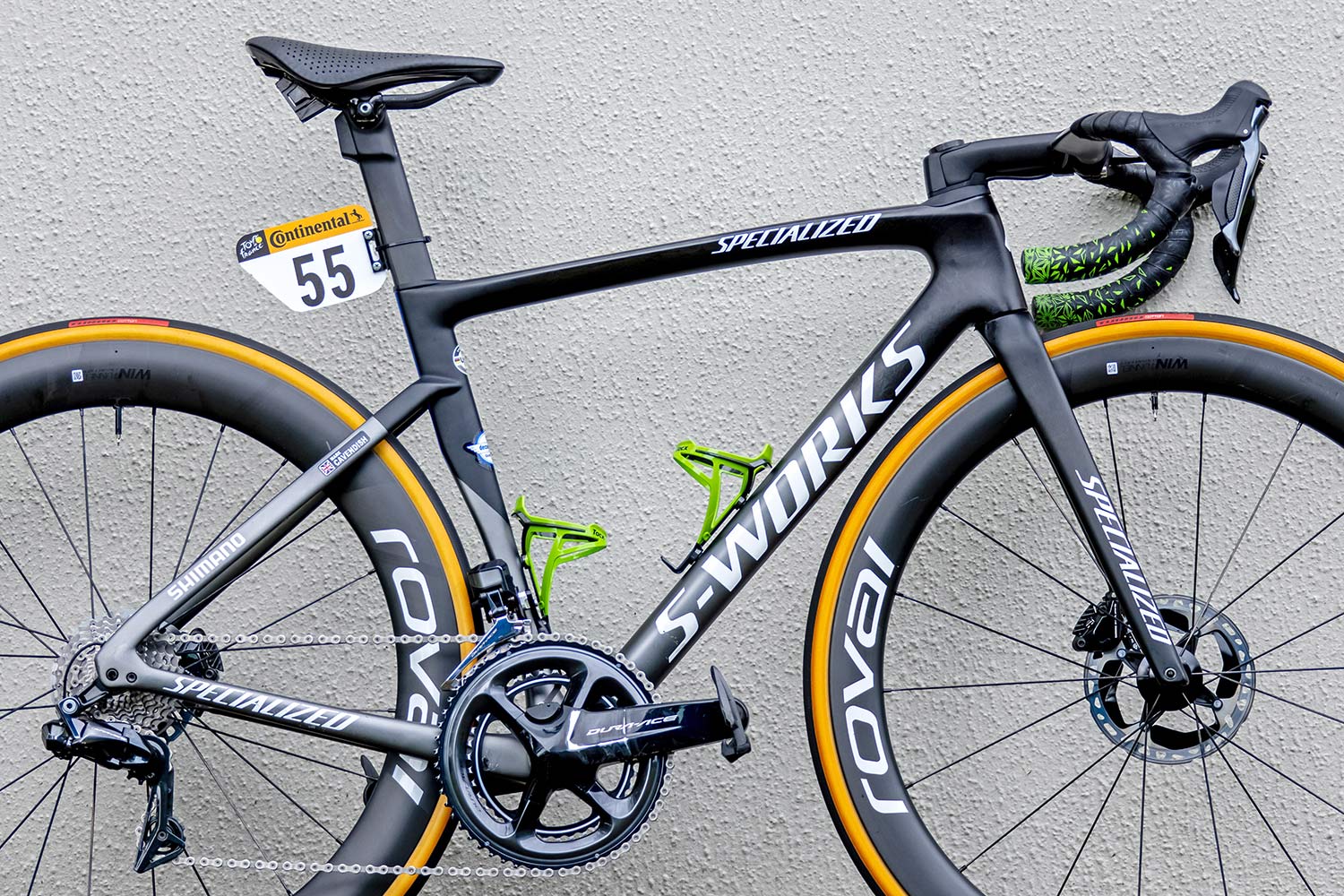 His bike still does have a few tweaks vs. the SRAM-equipped bike we tested last summer. Cav’s Shimano Dura-Ace Di2 equipped bike features the neat little add-on at the back of his zero-offset seatpost that puts the Di2 control box at the top of the post’s head, closer to the internal battery in the post than the more conventional bar end position… 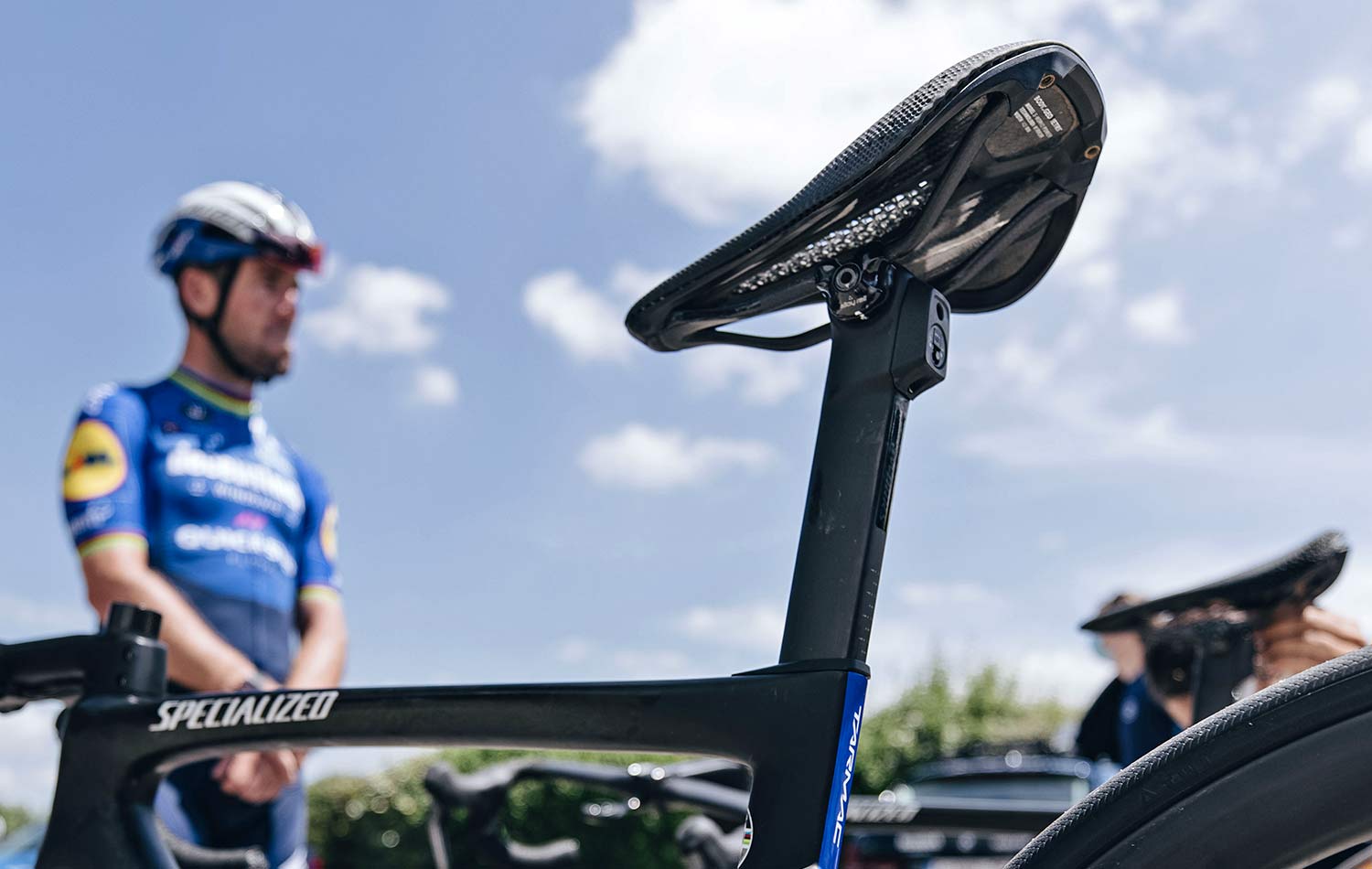 It’s actually a standard feature of the SL7 Di2 builds that I suspect puts this controller in a more protected position in case of a crash, while likely making it a bit more accessible for charging. 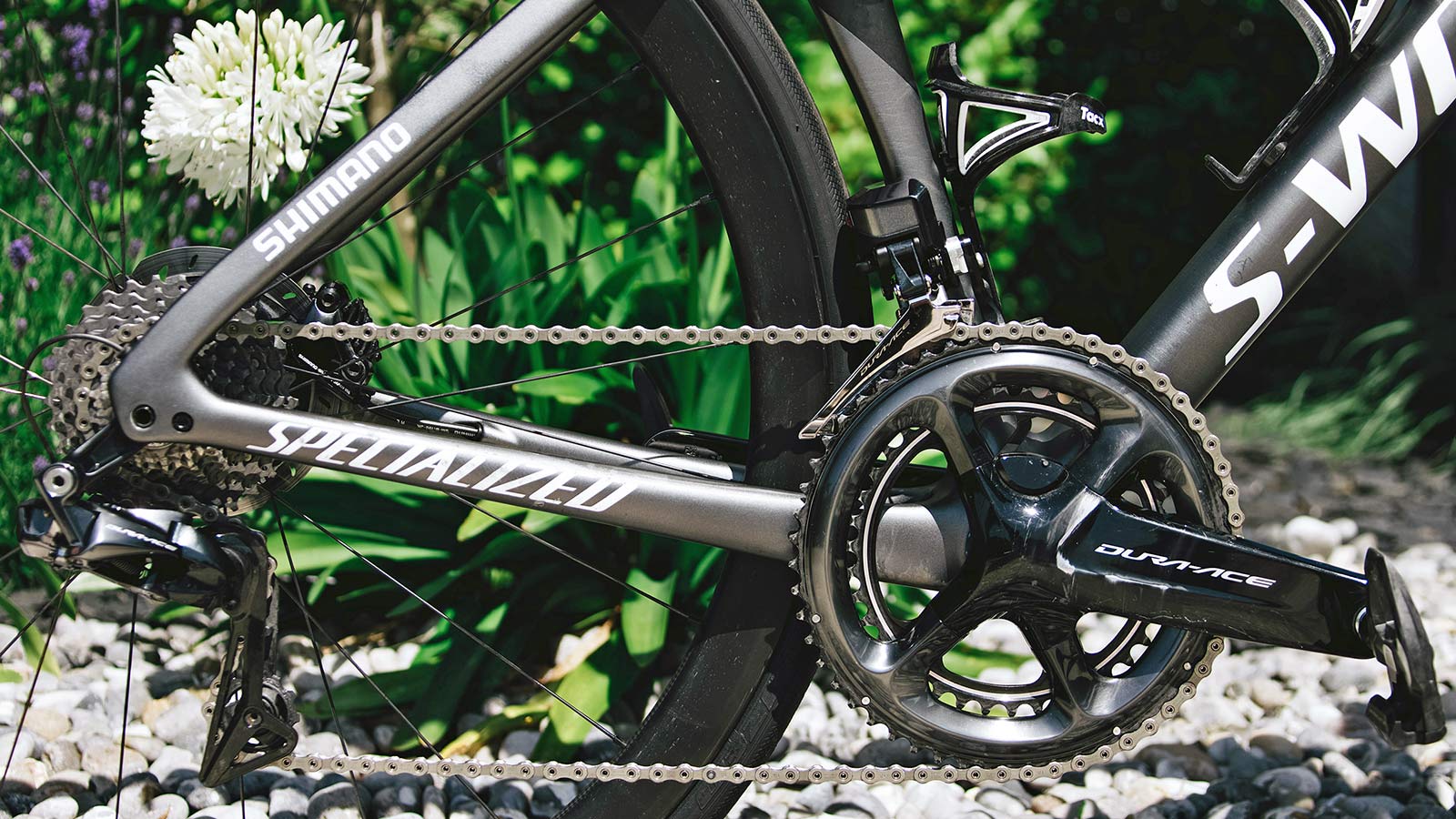 Cavendish’s bike also gets a stiffer, pro-only direct-mount hanger that eliminates the extra B-link of the Dura-Ace derailleur for more consistent shifts. 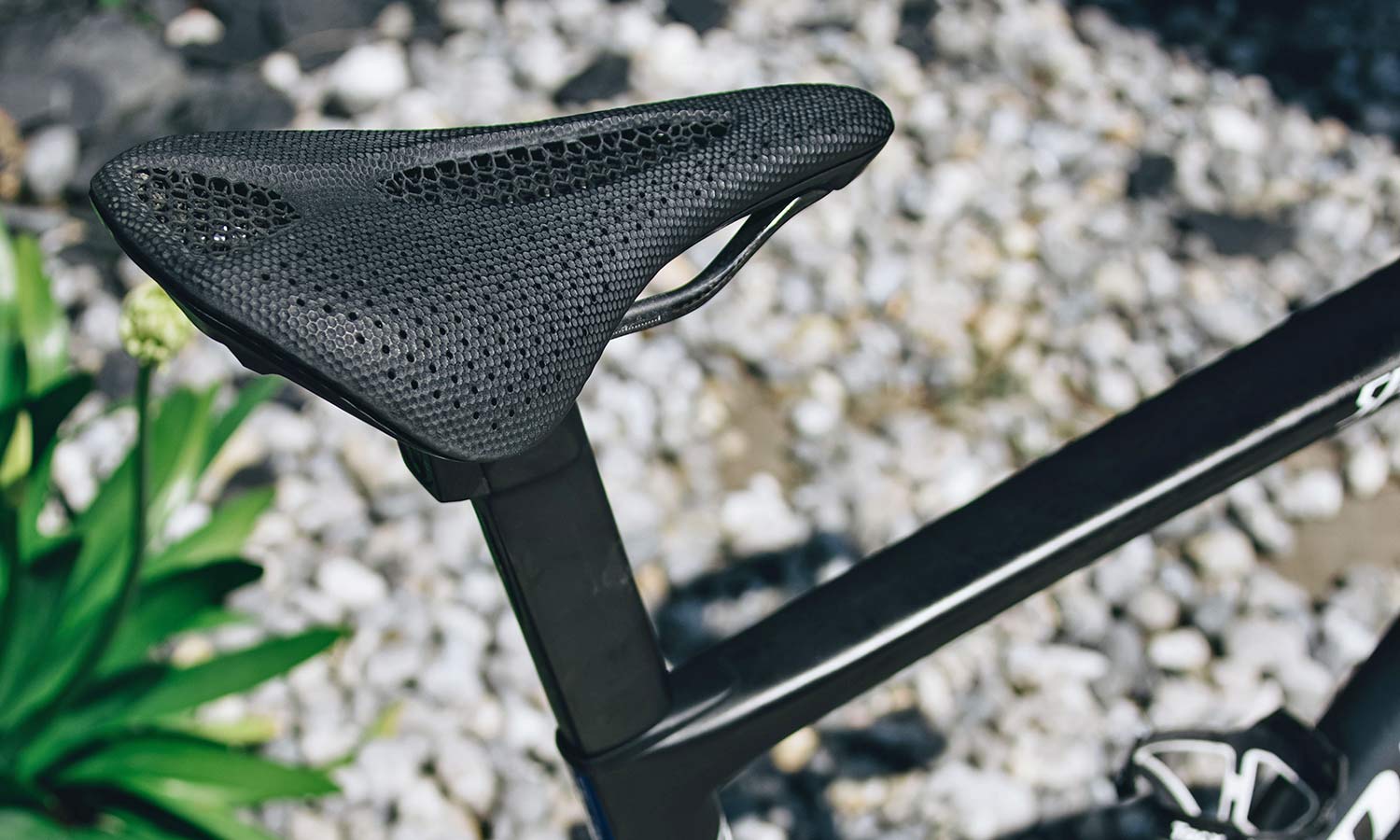 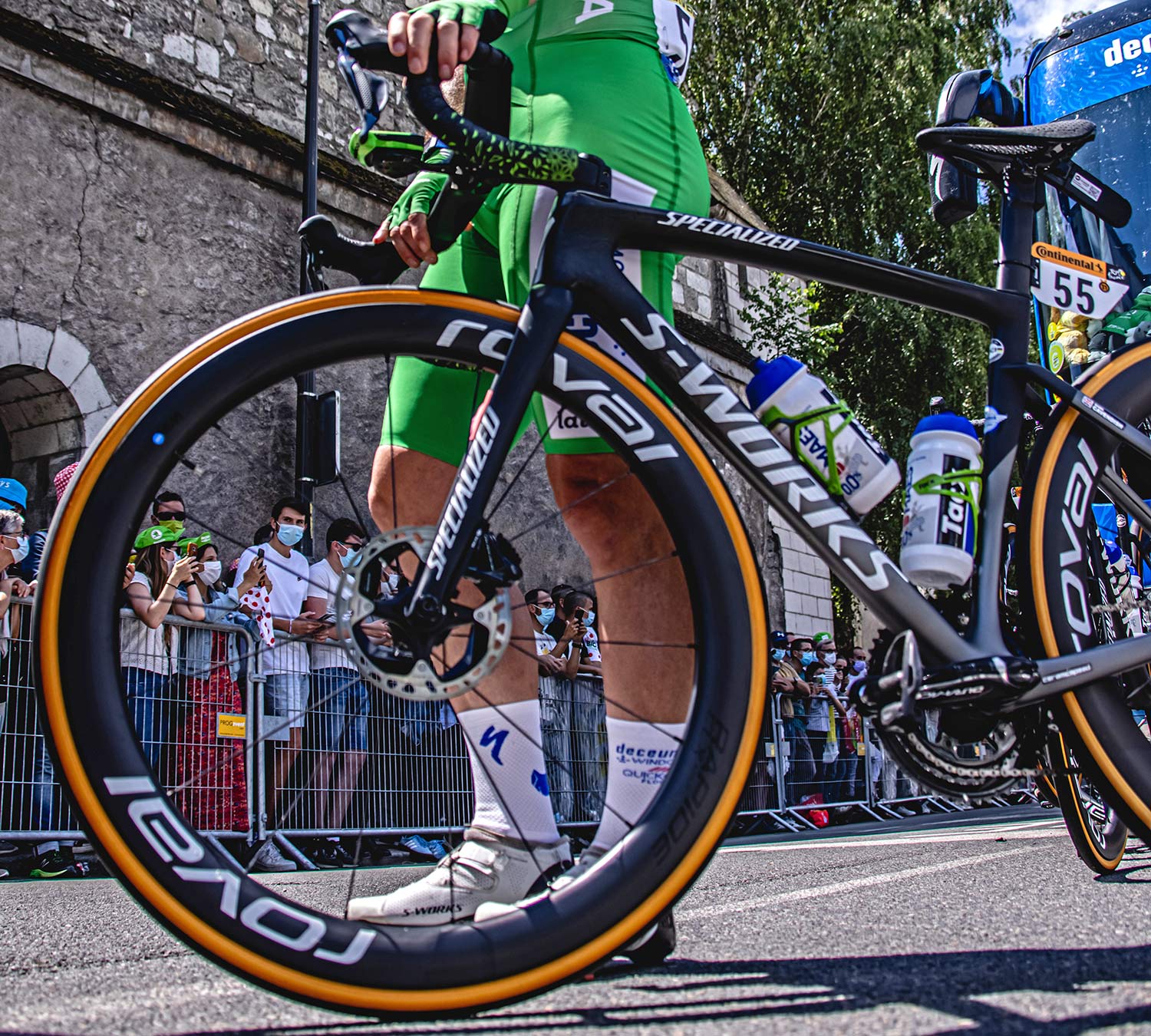 All-in-all it’s proved to be a winning formula for Mark Cavendish. And while he’s survived the Alps, the grueling Pyrenees are set to come next week, while Cav tries to make it four wins this year to tie Eddy Merckx’s title of 34x for the most Tour stage wins ever by one rider…

(#spolieralert, scroll down for breaking news…) 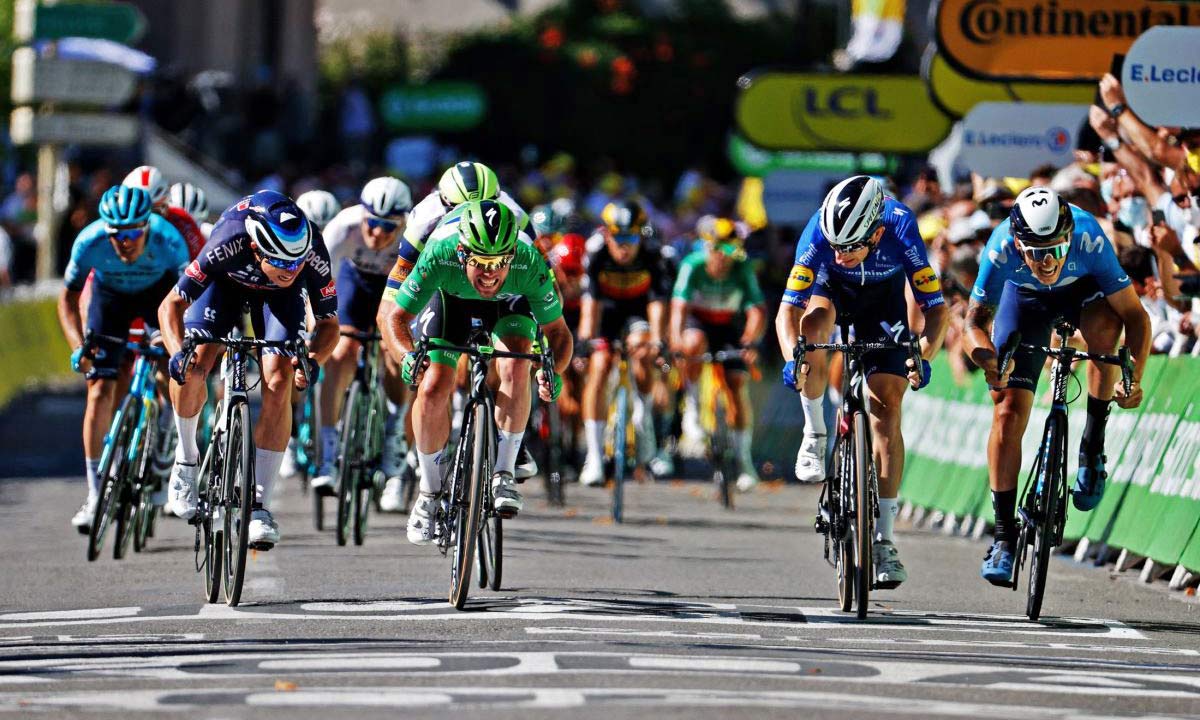 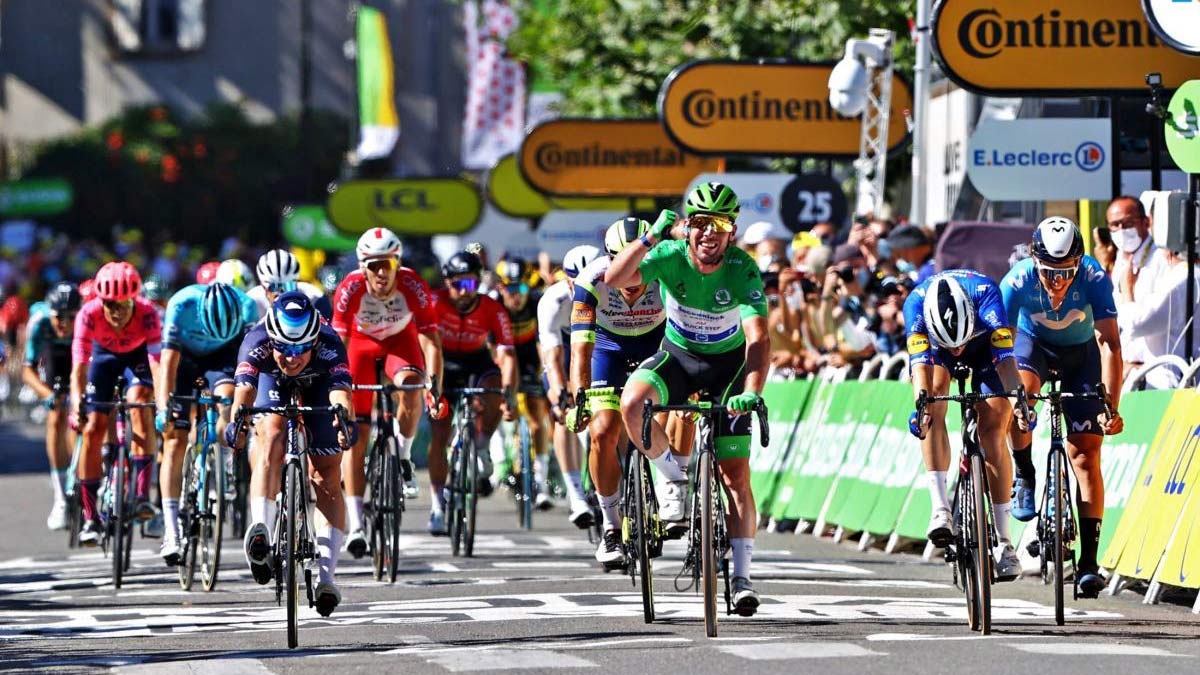 Now can he go for 35 if he survives the next few days in the mountains?!

“a stiffer, pro-only direct-mount hanger” -> looks like a standard direct mount hanger for Tarmac SL6, SL7 and Venge. Part number S182600003.
Is there any difference to that standard part?

Sometimes they use steel hangers instead of aluminum. Idk in this case tho.

Of note, Cav is also using Shimano MTB rotors rather than the standard road Dura Ace rototrs. Seen a lot of pro teams use these over the past year. A bit lighter. More aero and better in cross winds, perhpas too?

@kevin, it almost seems like the pros are also hit by the Shimano parts shortage.

The XTR rotors are supposedly stiffer and less prone to rubbing, that’s my understanding at least. I noticed some instances where they are only used on the front, which makes sense since that’s where the most rubbing occurs.

Will the rotor itself actually flex under stress from the hub/frame, or is it just more that the MTB rotors are stronger and less prone to deformation/warping over time?

It’s heat induced warping.
It can happen to any rotor, worn or new. Just need to make it very hot.
While Dura-ace rotor shred heat excellently and run cooler than any other rotor, it also unfortunately can’t tolerate much heat aswell. Its steel/aluminum/steel construction expand at different rate when heating up just like all other Ice-tech rotor, however, most of its weight go to the non structured cooling fin that just hang on there without contributing to rotor stiffness. XTR rotor, while being lighter, spend more of its weight on places which contribute to rotor stiffness.

What size frame does he ride? His saddle to bar drop doesn’t appear quite as extreme as some others. He’s also using clinchers with tubes which is pretty interesting.

The Interweb states that Mark Cavendish is 5’9″ tall and rides a 52 CM SL7.

All the Specialized folks are using tubes I believe, as their latest, lightest wheels aren’t tubeless compatible.

Weird saddle position with the nose down, guess I can’t argue with the result.