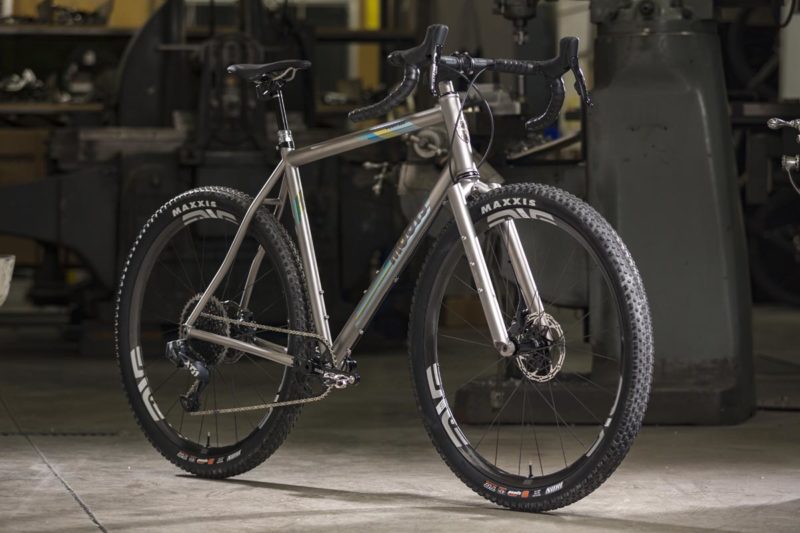 If it wasn’t already clear by the explosion of gravel bikes over the last few years, adventures off-pavement have taken firm hold in the drop-bar category. The Moots Routt ESC can take you even further off the pavement, with massive tire clearance and other touches encouraging you to venture further from the city streets. 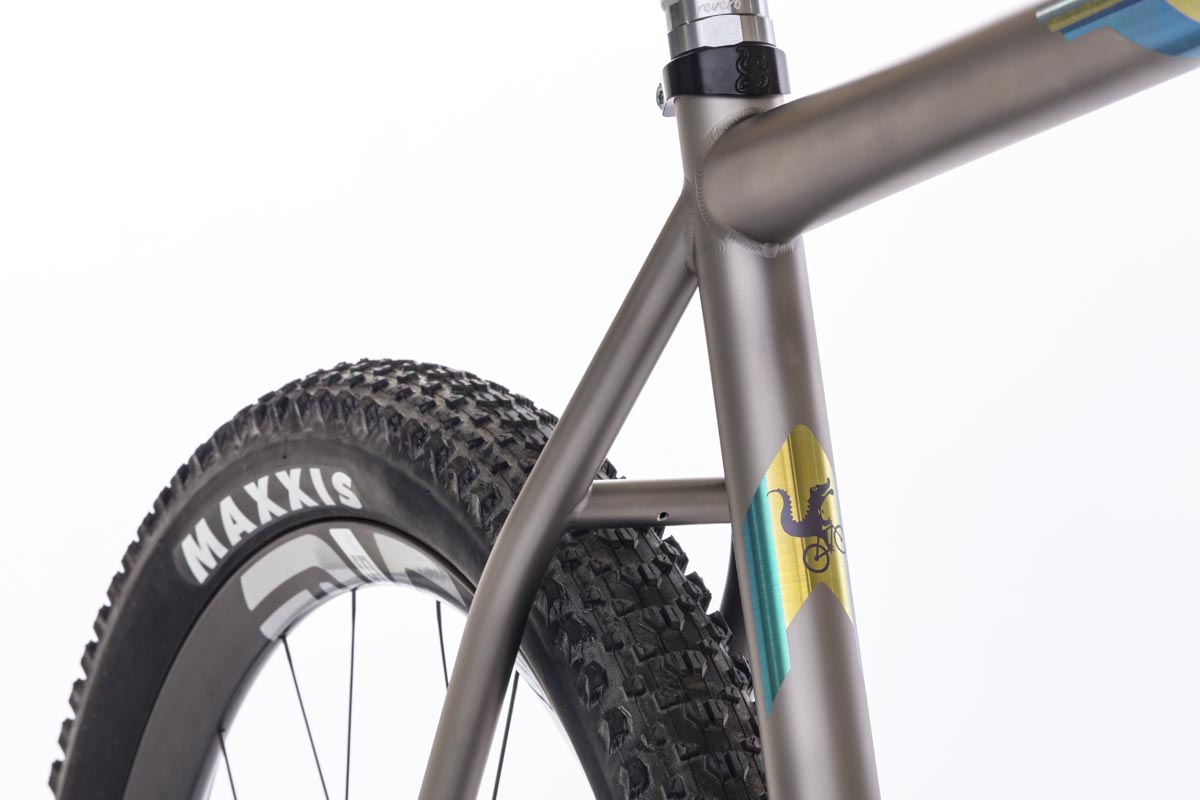 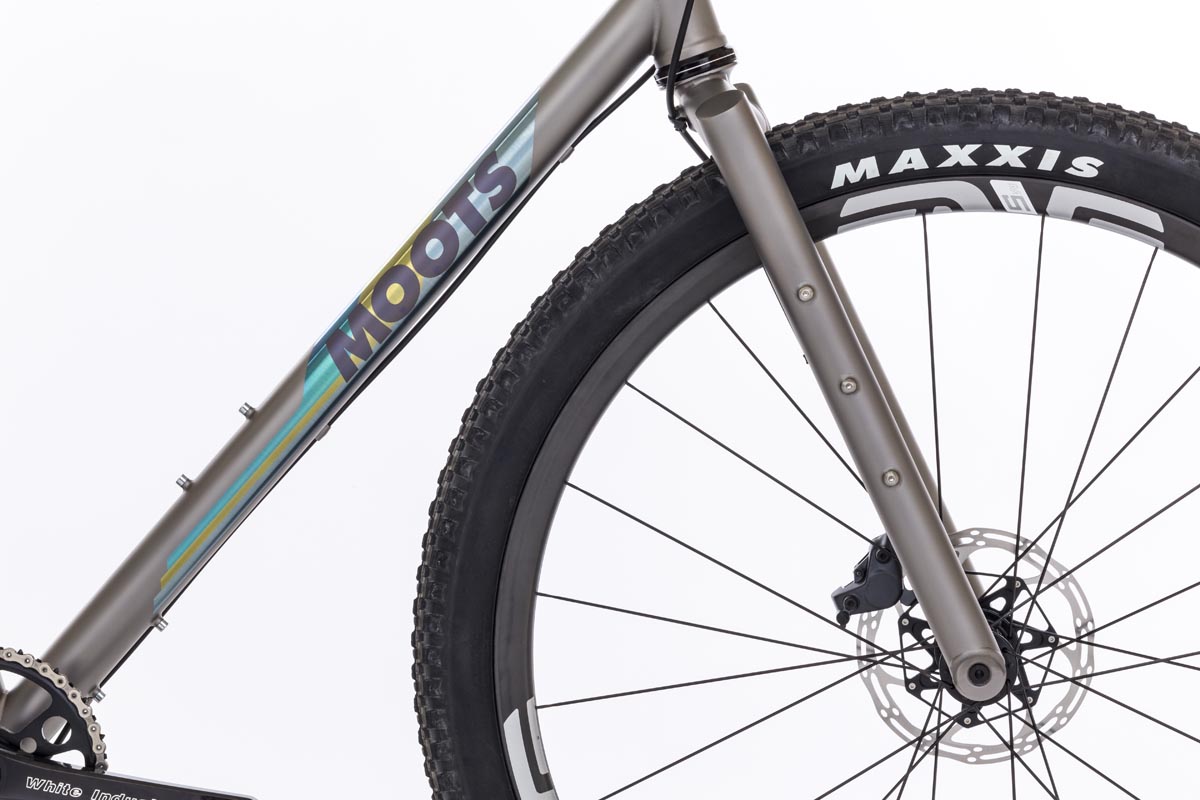 The frame also features 148mm boost spacing at the rear axle, another nod to both mountain bike tech and the Routt ESC’s intended adventure use. On top of that, there are three frame bottle locations and two triple-pack mounts on the fork. You can load this bike down heavy, in other words, for multi-day adventures. 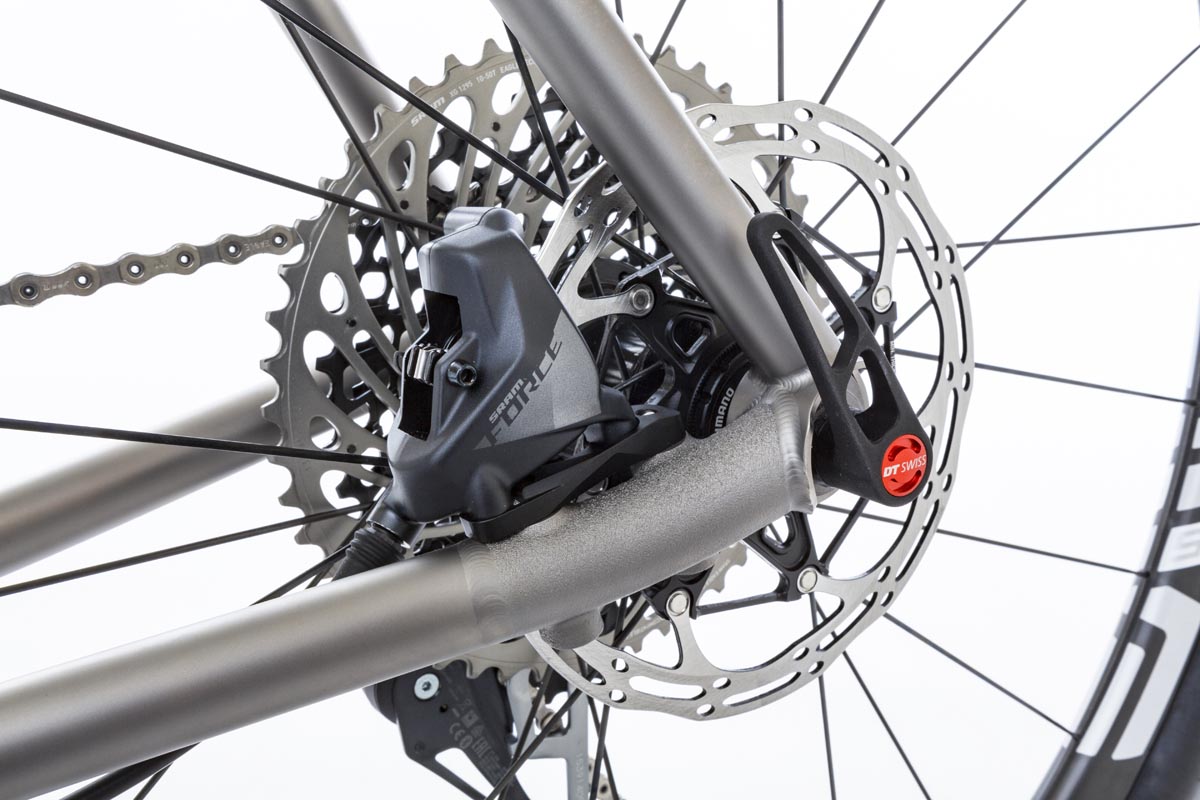 The Routt ESC also features 180mm front brake rotor spacing and 160mm in the rear — yet another bit of spec we see more commonly on mountain bikes. Moots finishes off the frame with a threaded English bottom bracket and oversize tubing to handle more punishment, particularly when loaded down. And the S-bend fastback seatstays allow all that tire clearance while maintaining stiffness for accurate handling. 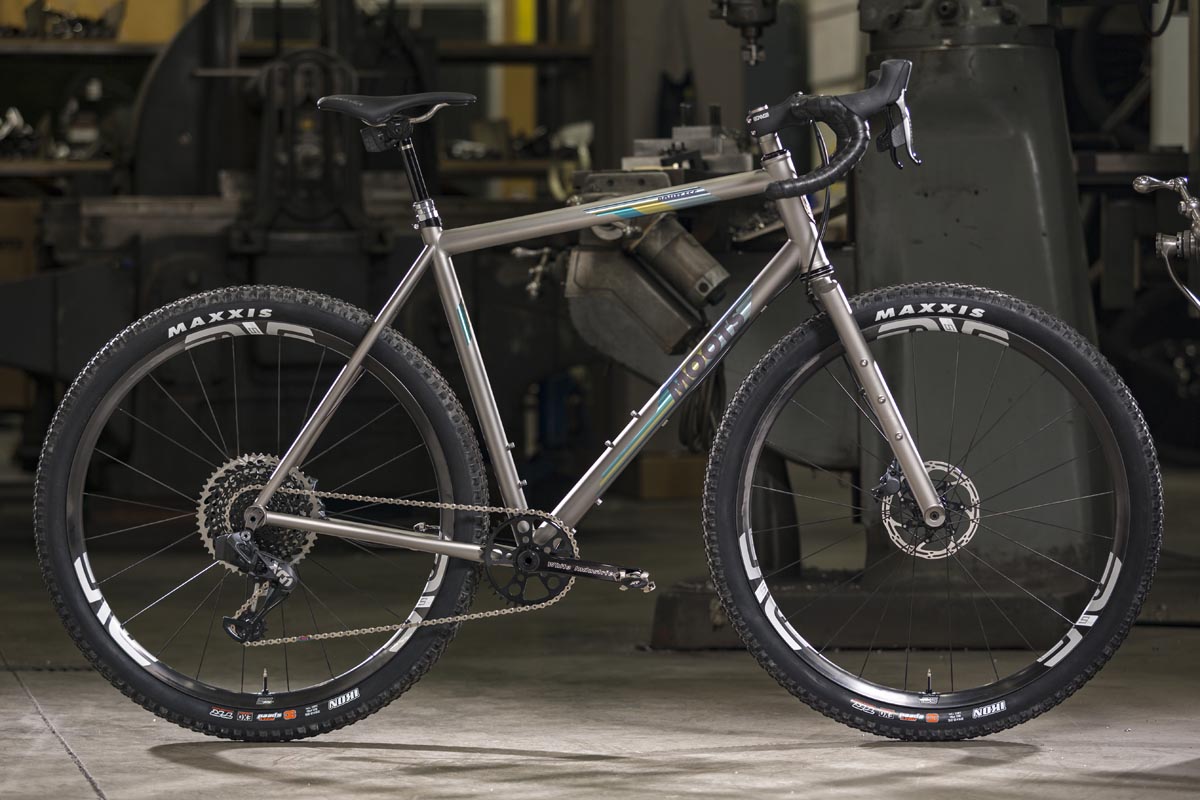 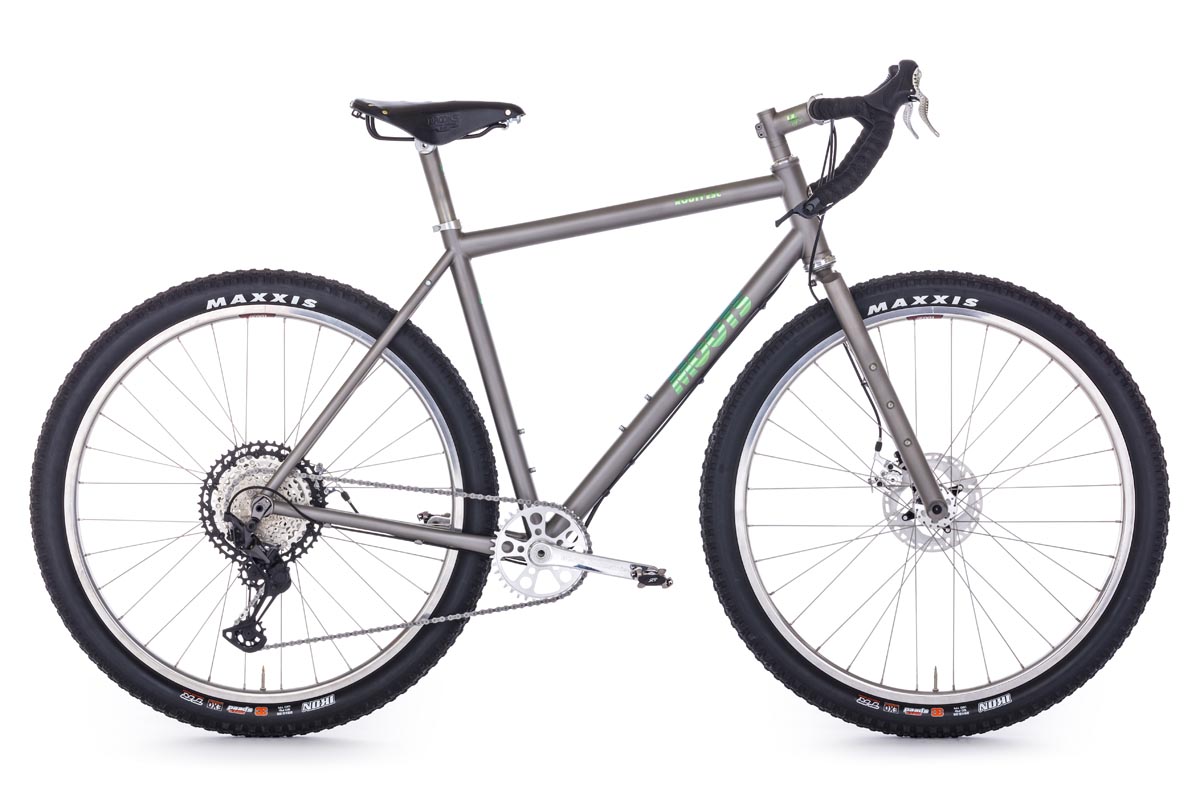 The Neo Retro build kit also gets the Moots Ti treatment at the fork, stem, and seatpost. The rest of the build offers a throwback look, with a polished silver Velo Orange handlebar, Paul Components Klamper flat mount brakes, Velocity Cliffhanger wheels with White Industries Hubs, and a White Industries M30 crankset with a 38-tooth chainring. That mates to a Shimano XT 10-51 cassette. Like the AXS build kit, the Neo Retro Kit comes with King Cages.

The Neo Retro build costs $9,769. You can update to the anodized emerald green finish for an additional $350.

Who is the Routt ESC for? 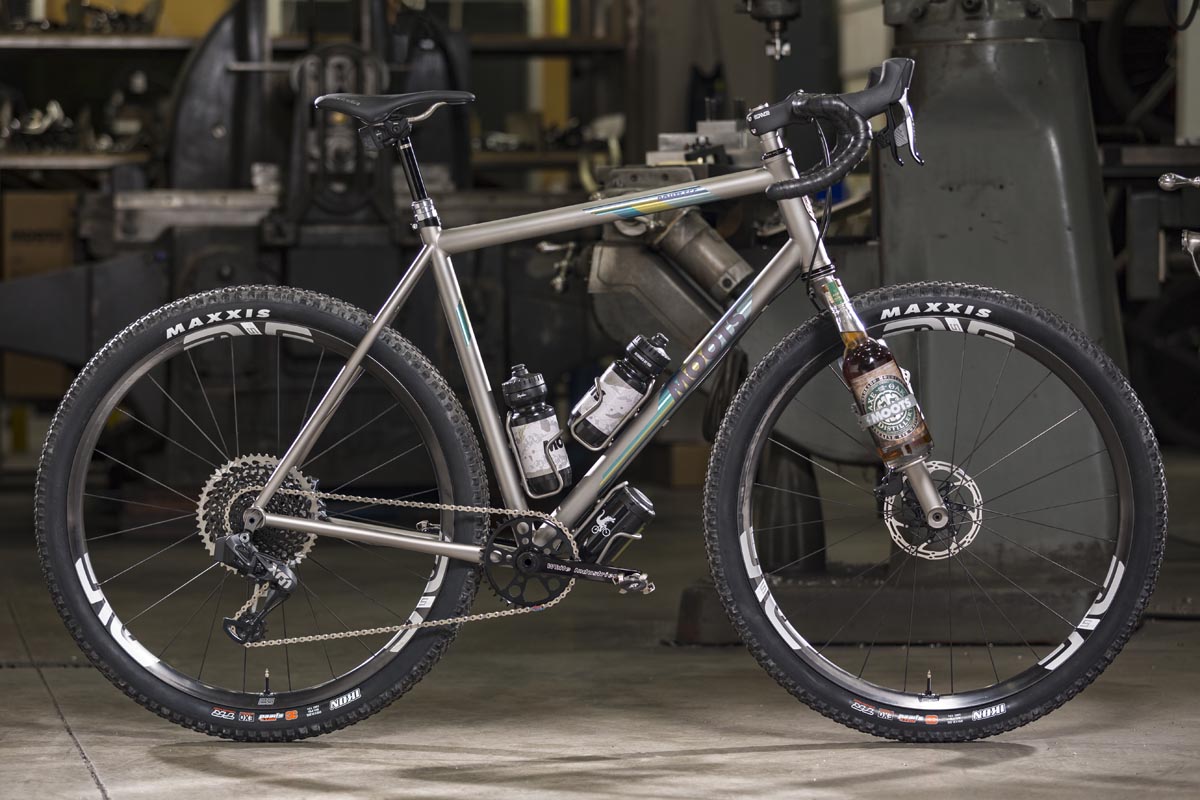 Moots positions the Routt ESC as an adventure bike, but it seems as though you can accomplish much more than that. Sure, it’s set up to tackle big, gnarly rides on singletrack and doubletrack, so take it bikepacking. But you could also throw on some narrower tires and hit the gravel racecourse with it.

You might want to reserve it for the gnarliest racecourses, though. That slack head angle means the Routt ESC is built for stability, so you’ll sacrifice some pinpoint steering should you find yourself in a tight bunch while racing. For a pure racing machine, opt for one of the more gravel-oriented bikes in the Routt lineup, like the Routt RSL.

Moots makes very nice bikes, but I sure wish they would do something so that their chainstays could be the length of modern bikes.

They do custom bikes if you have the $. Anyway, 445mm? Seems pretty sensible for the tyre size, BB drop and front-centre of this bike, plus the bars and intended use.

They cannot/won’t do short stays last time I checked. For a modern hardtail, 435 is probably the average. I would like shorter than that (425-430) but could live with 435. They don’t want to make the necessary yoke or otherwise to accommodate tire clearance/chainring clearance. I asked Seven a few years ago as well (they were worse, with 455mm being what they told me they could do). They said they didn’t want to ruin the ride quality with a yoke, and they had so many bikes to back this up, etc. I’d rather have a good geometry over a slightly better ride. Engin, a one person (to my knowledge) shop has made his own yoke for short chainstays. I’ve always wanted a Moots and certainly would pay if they had a short stay option.

Just want to point out that the fork is not made by Moots. It’s sourced from a fabricator in China. There’s anything at all wrong with that and I really like the aesthetic, but it’s not the same “Moots Ti treatment” the post and stem receive.

Meant to say “nothing at all wrong”!

Looks like a clone of Bearclaw’s Ti Fork. Bearclaw’s on the other hand is made in-house.

Moots sources the fork from Bearclaw.

Haha, I was just wondering why it looks precisely like the one I bought from AliExpress for some $250 last year. Top quality, but Moots’ price tag is ridiculous.

rather have a Waltly and an extra $3000+. send them the specs of this bike and get out and ride.

A bike in this price category is not for bikers is for buyers.