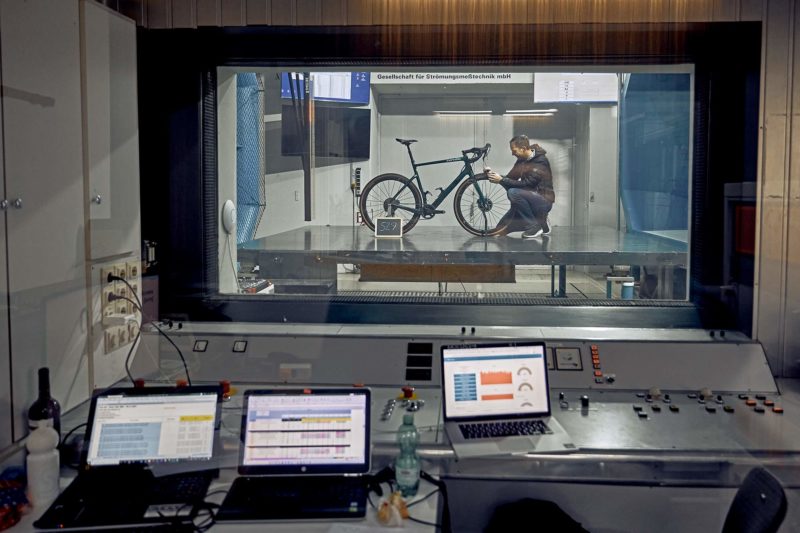 No matter how much you spend on an aero gravel bike or aero gravel wheels, your tires will also have a noticeable impact on gravel aerodynamics. And this is a relatively cheap place to earn ‘free’ watts. What is the fastest gravel tire in the wind tunnel? Swiss Side decided to find out as they tested their latest Gravon aero gravel wheels.

The answer, unsurprisingly… it’s the smoothest gravel tire with the smallest knobs and probably the least off-road grip. What was maybe more surprising is the knobby second-fastest gravel tire they tested! 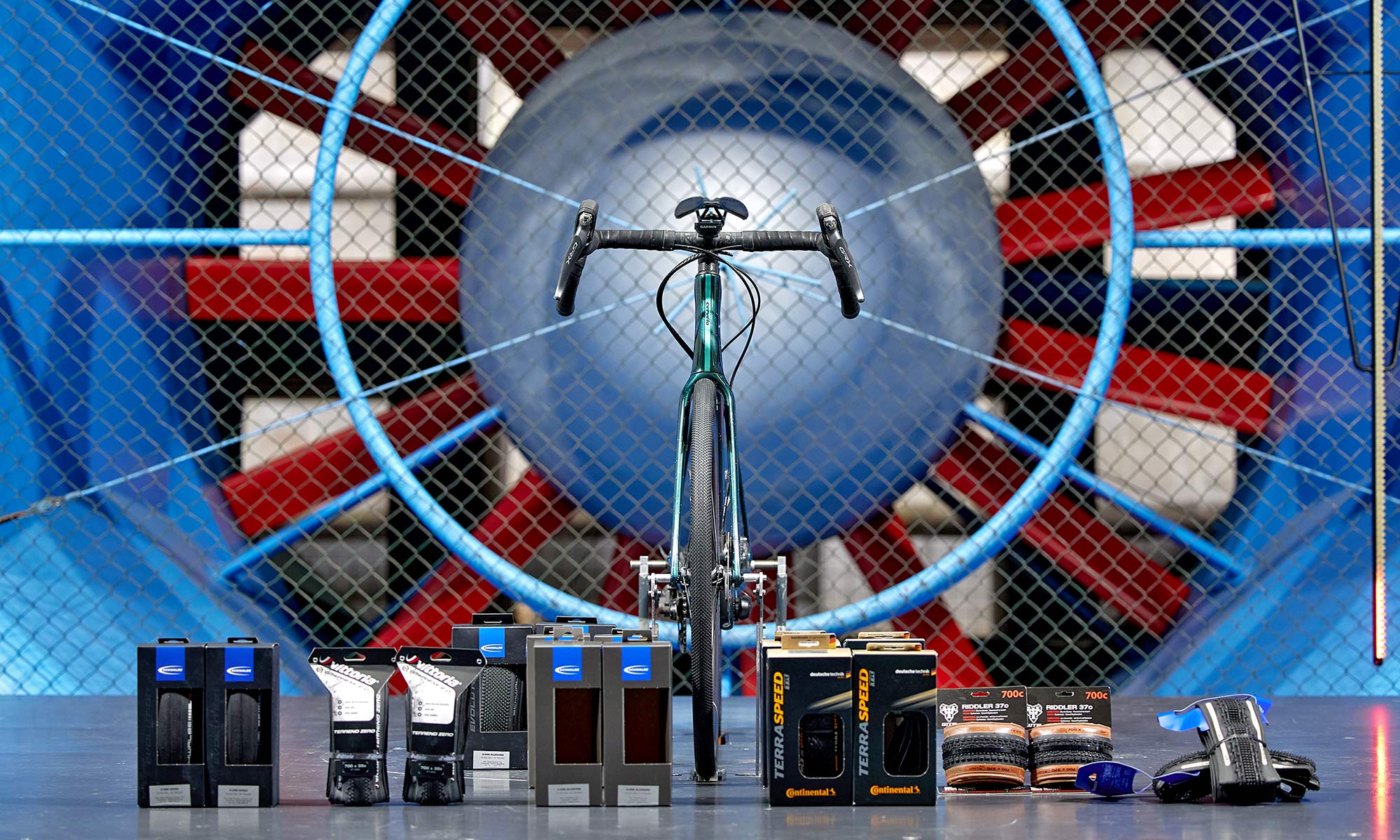 all photos c. Swiss Side in the GST wind tunnel

Every new bike these days is hyped to us as “more aero“, hoping the idea of ‘free’ speed will convince buyers to ditch old bikes and buy something newer & faster. It’s not entirely disingenuous – in theory, more aero gear will make you faster, no matter how fast you pedal.

But do we really need to make our gravel bikes more aerodynamic, too?

Swiss Side was evaluating their new aero carbon gravel & affordable alloy Gravon gravel wheels into the GST wind tunnel to document their aerodynamic improvements, so why not set straight which gravel tire is the most aero?

Which gravel tires to test? 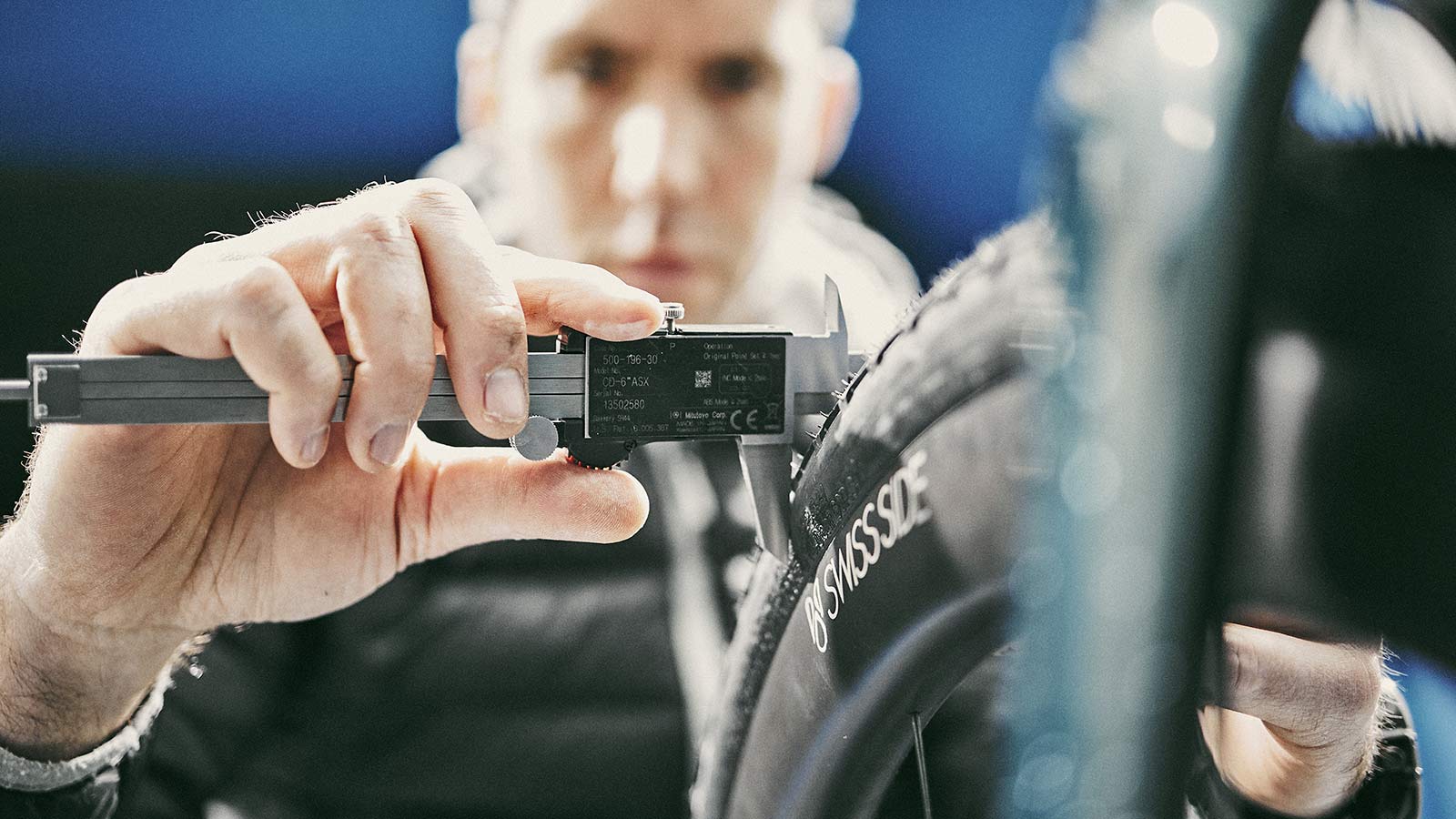 Of course, there are hundreds of gravel tires in the potential test pool, so Swiss Side first measured the increased drag from 35mm to 40mm to 45mm tires with the same tread, with predictable results – narrow is faster, wider is slower.

So, next then settled on comparing narrow 35mm tires – essentially what might have been classified as ‘fast gravel’. 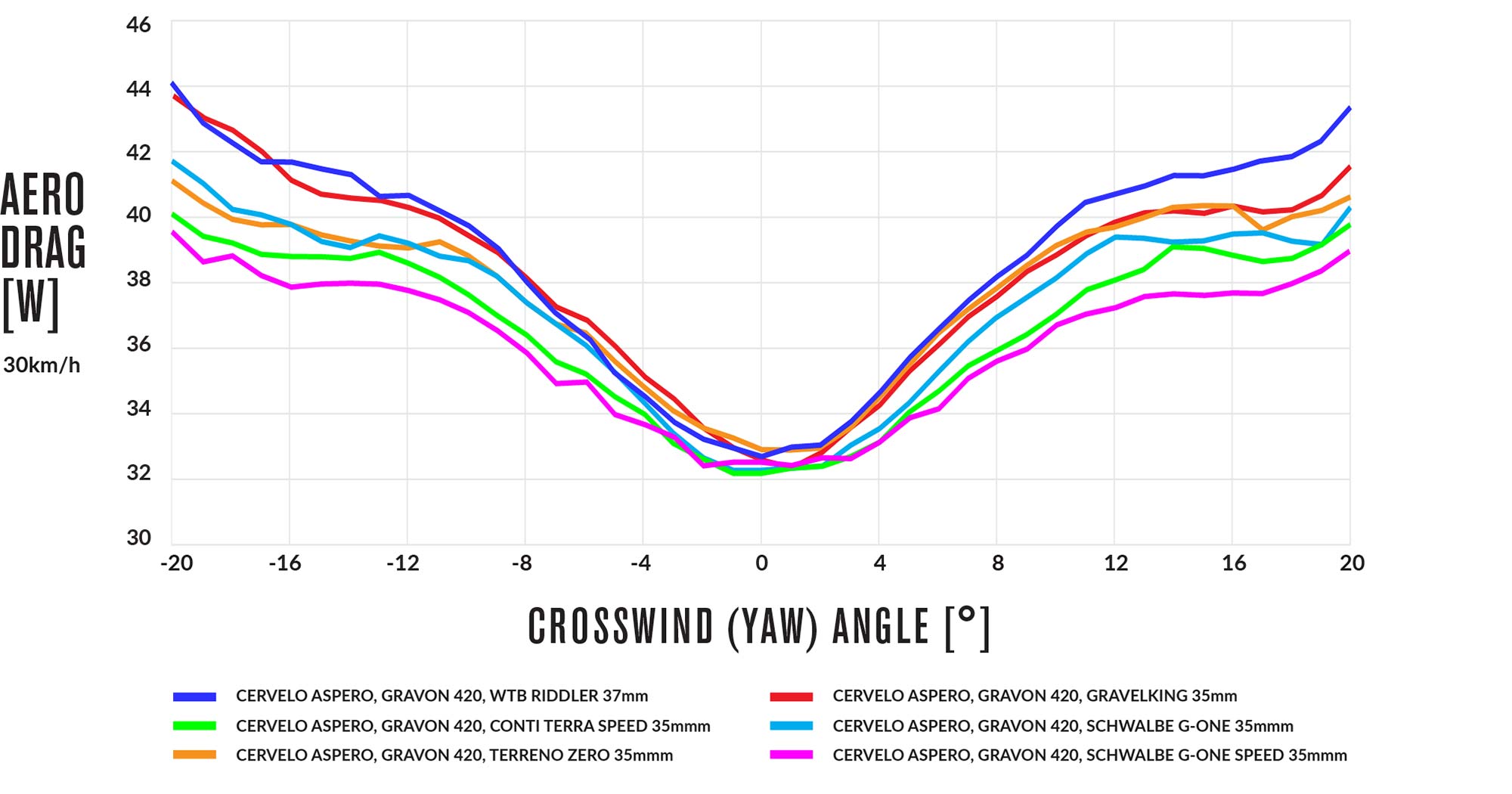 Swiss Side set out to evaluate 6 different popular tread patterns, ranging from almost road slick to the roughest you might find in a narrow ‘fast gravel’ tire to evaluate the drag effects of tread knobbiness.

“In general, the rougher the tyre and the size of the knobs, the higher the aero drag and in particular, the sailing effect is reduced. However, the Continental Terra Speed was a slight exception with a low aero drag level and relatively good sailing effect for its comparatively large sized knobs“, according to Swiss Side. 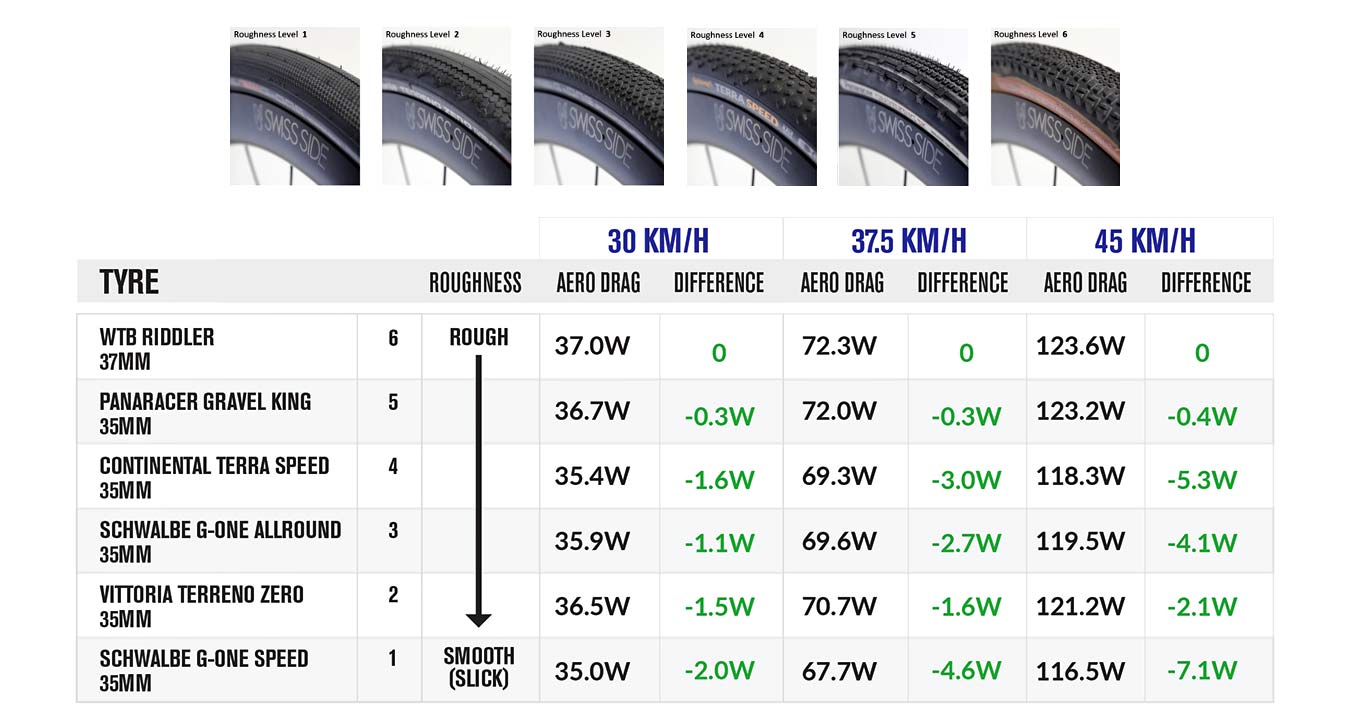 The almost slick Schwalbe G-One Speed with its tiny round dots for tread was the ultimate winner of the title of fastest “most aero gravel tire”. But the Continental Terra Speed with its much taller and widely-spaced mini hexagon tread lugs (& sipes) was the second-fastest overall, even though Swiss Side rated its ‘roughness’ a 4 on their 1-6 scale, just edging out the G-One Allround we reviewed back in 2016. 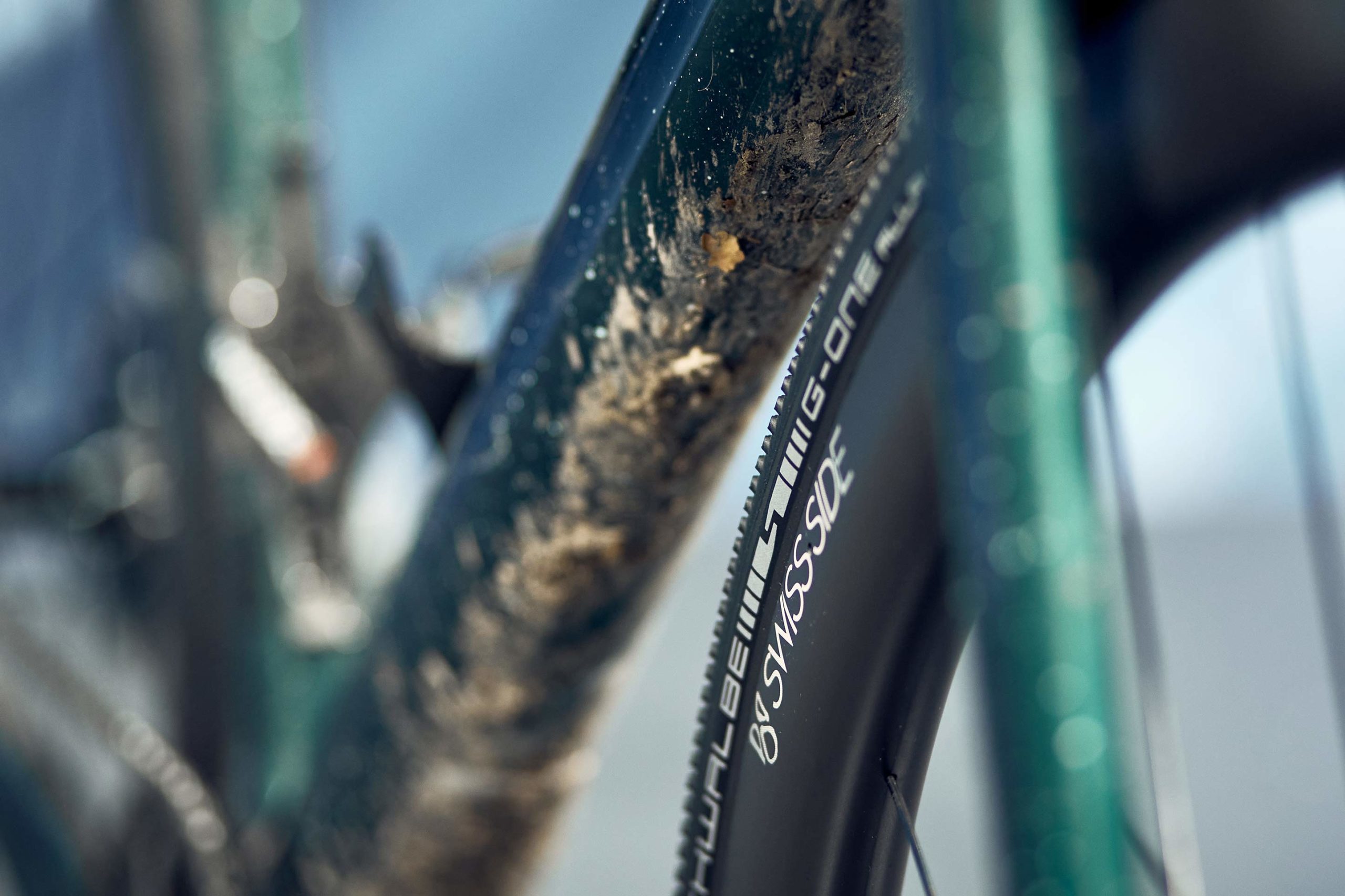 3T told us that a bit of mud helped break up the boundary layer for smoother airflow over their Exploro aero gravel bike when it was first introduced, many years ago. But if you aren’t starting with already aero gravel optimized airfoil shapes, will a bit of caked-on mud actually make your gravel bike faster?

Swiss Side says, no.

They measured their CEO Jean-Paul Ballard’s slightly muddy Cervelo Aspero, then cleaned it and ran the test again. It was +0.2W slower at 30km/h. As they described it “measurable but almost insignificant“.

But still, does aero really matter for gravel? 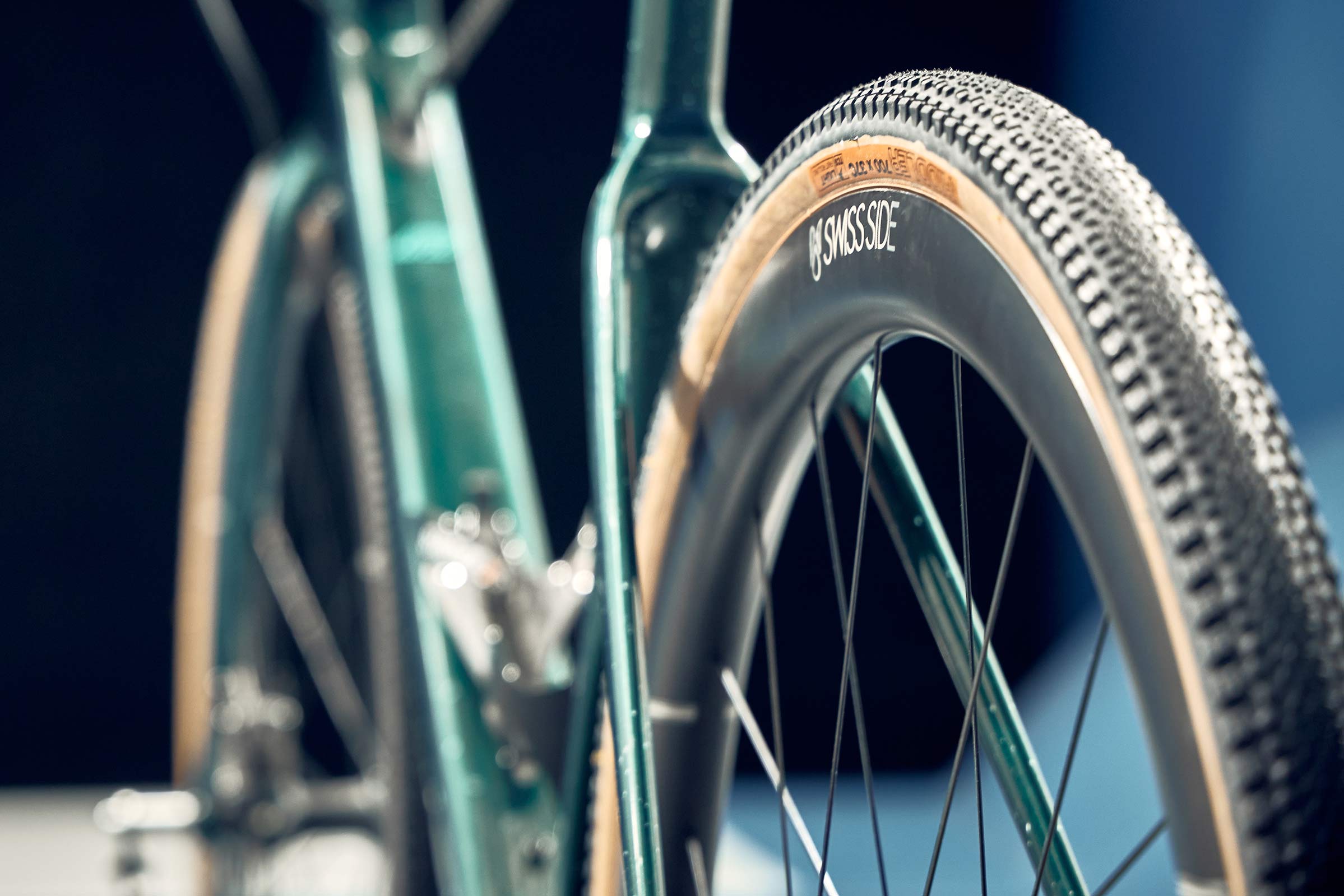 I have to say, I’ve personally tested every one of the tires on this list, ridden out in the real world on road & trail. I’ve crashed, completely without warning when a G-One Speed slipped out underneath me on a moderately loose corner. Its middle of the aero pack G-One Allround however, surprised me as a predictable all-rounder.

That fast Continental Terra Speed has certainly been a predictable tire, but I haven’t put as many kilometers on them. Maybe it’s time to get some in for a longer-term review? I wonder if they have a 45mm version in the works?

But the least aero gravel tire in this line-up of wind tunnel testing – the only moderately knobby & fast-rolling WTB Riddler – that’s a tire I have repeatedly relied on for the unpredictable terrain inherent in gravel riding. And I have a set mounted on a gravel bike at home right now. 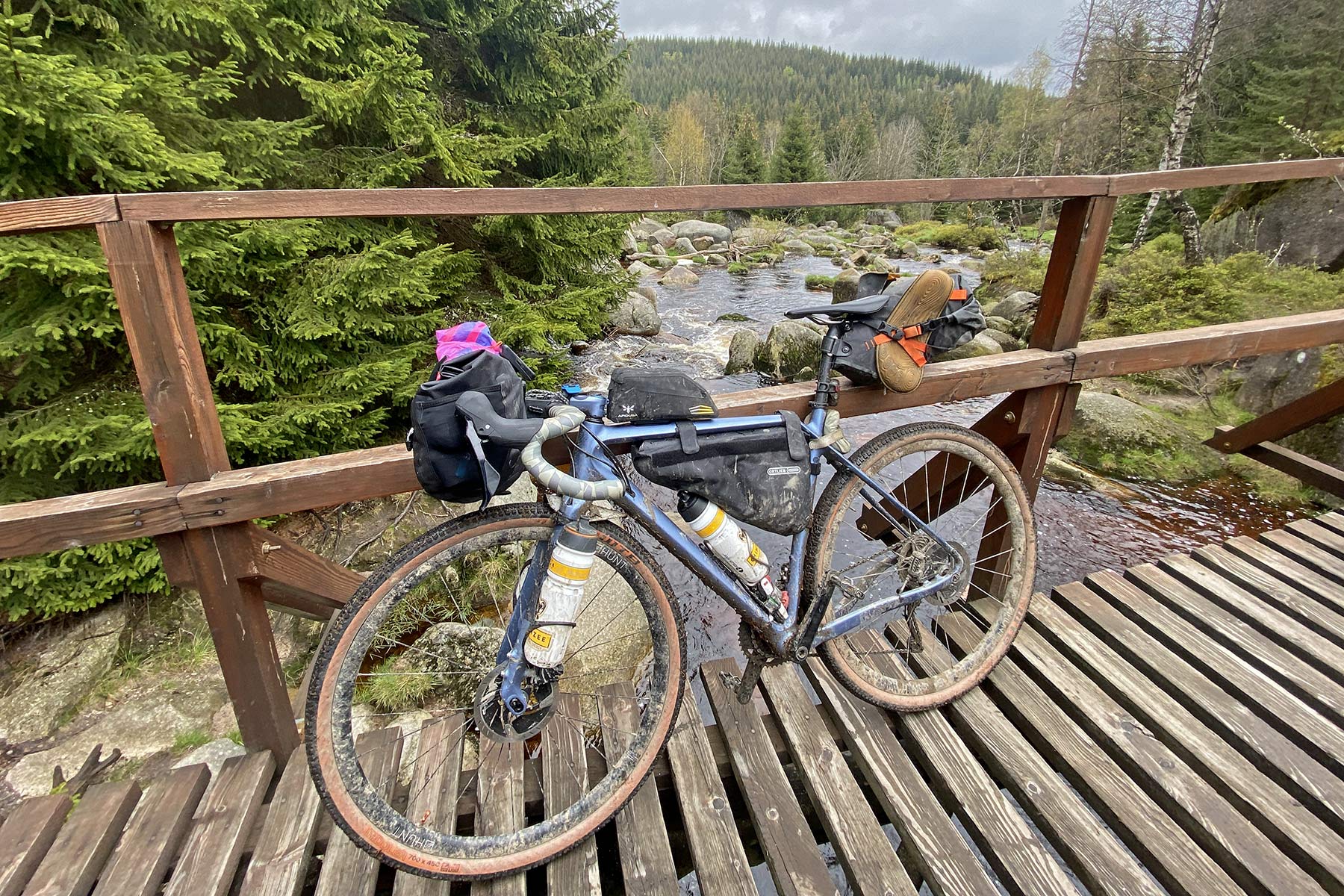 I’ll happily take the baseline 2W aero drag hit with the reassurance of a tire I know I can count on & predict in a loose corner (I certainly don’t average >30 km/hr on any real gravel ride). In reality, it’ll probably be 2+3.6W for my 45mm wide tires (vs. the slick 35mm.)

If you want to risk it a bit more, head over to Swiss Side to read their full aero gravel report.

They also explain why you are starting with at least a +39W drag penalty by riding a gravel bike over an aero road bike to start with. And that a best-case aero wheel+tire combo might save you 5-10W vs. a knobby/low-profile combo at common gravel speeds…

Seems between the aero results here and rolling resistance data from BicycleRollingResistance.com the Conti Terra Speed is a all round winner.

I’ll agree with the author, while 2 watts may be measurable, I’ll take the tire that gives me more confidence. Crashing is slow.

And painful; I’ve also crashed without warning on G-One Speeds, in my case on bitumen at low speed. Predictable is good.

I can’t wait for the gravel aero bars test.

Agreed. I run the SS and it’s a fast tire.

I’m not sure why the WTB Riddler was tested over the WTB Byway. Yes, it’s an all-road tire, but I’ve found it fairly effective on gravel. The only issue is the limited sizes on the Byway.

This changes everything…
Oh, and agreed, the WTB Byway would be a more suitable tire for comparison.

What are we actually doing here people…?

I’m guessing a smoohter tread of a given size will test better aerodynamically.G-One Speed is practically a road tire. I enjoy riding them for off-season road and light gravel but it’d be pretty risky riding them quickly on looser surfaces.

Having ridden most of these tires…even the WTB is kind of sketchy in turns at race speed. Plus if you’re in a pack aero is less important. This is only relevant when soloing or if you are leading the pack.