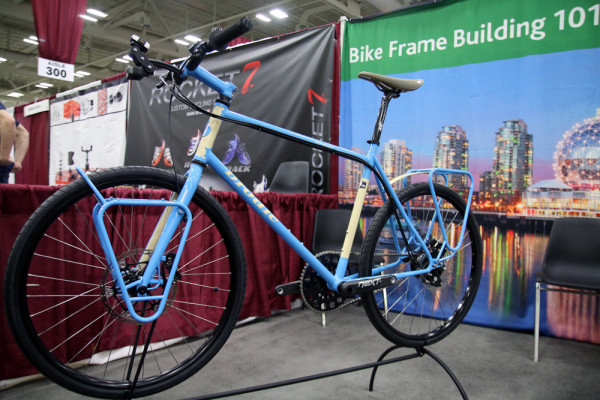 You could say Paul Brodie has a history of building bikes. Calling this city bike #4265, the number refers to the number of frames he has built over the years with Paul telling us that he has kept records on nearly every frame he has ever built. Paul also mentioned that in previous years he was disappointed that he wasn’t allowed to enter the design competitions with amazing creations like the Whippet from 2012, since he was technically at the show to promote his Frame Building class instead of the bikes.

After gaining the blessing of the show judges to enter the competition, Brodie came prepared with this elegant but extremely functional townie and walked away with the Best City/Utility bike award… 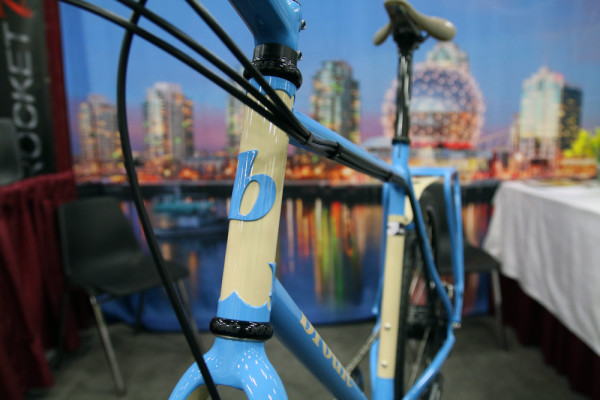 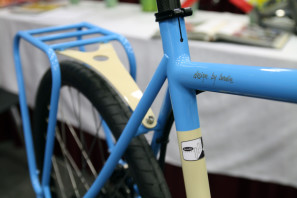 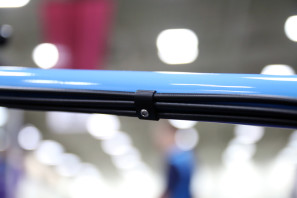 Using a bilaminate construction for the head tube, the steel frame is brazed together with the skill you would expect from someone who has made over 4,000 frames. Nearly every bit of the frame was produced by Brodie including the neat cable guides which bolt into the frame. 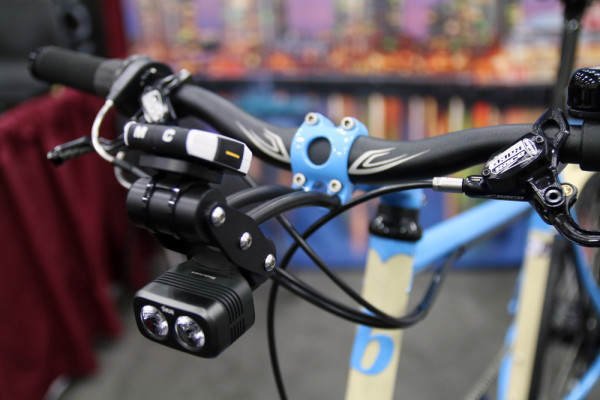 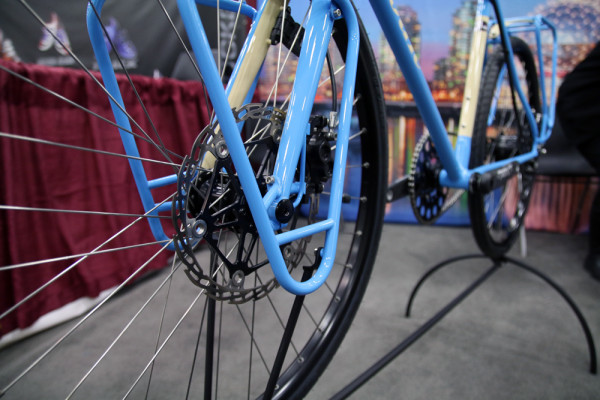 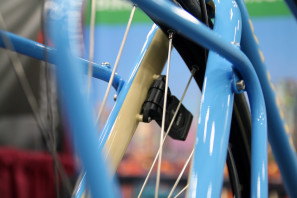 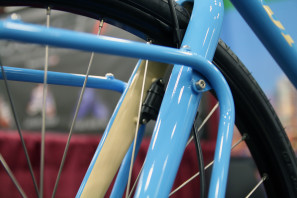 Just as you would expect from a professor of frame building at the University of the Fraser Valley, the bike has a number of custom touches including a dedicated computer mount on the fork, integrated light bar for the stem, and custom front and rear racks built around thru axles front and rear. Key to the design of the racks was the ability to accommodate large brake rotors since Brodie wanted to run a 203 front and 180mm rear. 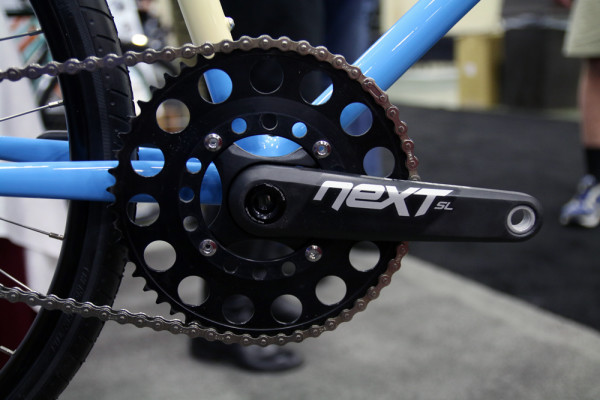 The giant chainring spinning a Rohloff rear hub caps off the winning build.

Where is the utility in this? In the $600 crank? You going to chain this thing up on your daily commutes? It’s a beauty certainly, but what are you going to do with it??

@topcheese. I get your critique, but this is NAHBS and they have a city/utility bike category.

You shouldn’t be surprised that the winner of that category isn’t a anonymous cheap-n-cheerful, no-big-loss-if-its-stolen $150 craigslist find.

@topcheese, I agree it is a beaut–just wish it had a longer stem.

You understand the purpose of NAHBS, right? Show the limits of what can be done, and all that?

BR is doing an okay job talking about NAHBS bikes and I see a number of BR readers just pooping on it. I find it strange.

@Drew Diller–I realize its a custom build for a tall customer, I’ve loved Brodie’s work since the late 80’s when I had a 140mm stem on my (ATB). Sorry, feeling smart-alecky this morning.

Can any one explain, “bilaminate construction for the head tube”? I’ve never heard steel and laminate being used in conjunction.

@Larry Falk I found that term confusing also, some googling led me to this: https://galluscycles.wordpress.com/2011/01/17/workshop-update-bi-laminate-construction/

Funny, aside from the upright bats, that looks way more like a loaded touring bike than a city bike to me.

Great looking bike, but not a city bike in my book. No fenders, kick stand or bell. The racks are really nice, but a basket or flatbed is more useful for a city bike. Two years in a row best city bike without fenders.

@Larry Falk
As far as I understand, bilaminate construction is something like a half-lug.
Only one tube gets a “lug”/reinforcement of a larger tube brazed to it (here the headtube gets the upper and lower blue reinforcements) instead of both with a lug.
The other tubes (here downtube and toptube) are using the larger contact area to be (filled-)braced to the headtube.
Saw this first at on frame from german framebuilder Ulrich Vogel
http://www.vogel-rahmenbau.de/info.htm
Take a look at his beautiful pictures!
I like his lugless construction. It´s super-clean in reality.

@MikeFlanigan. It never rains in Vancouver. 😉

I am one of those who invested in a custom daily commuter. I had an IF PlanetX Steel Cross set up for Single Speed as my daily commuter. I ride 15 miles each way and between 700 and 1200 feet of elevation each way. My commuter is decked out in Chris King Hubs & headset and Record carbon cranks. I never lock it , bringing into work and locked up inside at home. The way I look at it, I’m on this bike more than my weekend warrior bike ( a 1999 Merlin Extralight). BTW I work retail behind a counter, gray hair & very far from rich. I saved the money by not paying for a daily commuter car.

pdxrunner has the technique for using (and keeping) an exotic commuter. Be able to keep it inside your workplace during the business day and inside your home at night. Locked up outside it might as well have a “Take One” sign on it.

@David B
Agreed, Cheap daily commuter bikes are a false economy, if your riding to get to work a decent bike will be an investment. An expensive race bike is nothing but a flash toy for the weekend but a well made commuter machine will last through the years, having fenders will stop your parts falling apart from grit and water exposure, decent hubs wont fall apart from daily use.
The issue with theft shouldnt stop people riding decent bikes, organise your workplace to have a secure setting for bike place. Employers generally accommodate.

Also bike insurance is an option.

I am with Dolan. Put some dropbars on it and I will use it for my 4-5 days trips.

Yep.
You can argue it’s too expensive- if you live/work where you have to leave it outside alone.
You can argue the stem is too long. Or too blue. Or why not use a dual pitch thread on the left pedal when everyone knows that’s the only way it’s ever been done.
But-
It’s hard to argue that it’s beautiful and well done. Clever thoughts here and there.
But from where I perch- no town bike should be w/o fenders. Pretty painted pinstriped custom ti artisan bamboo laminate carbon organic cage free fenders.

Two questions-
Is the F hub a generator? Pretty sure not. But how is that light powered?
What’s the little black gadget inside the fork leg?
Oh- and has anyone done any mods to make a Rohloff electronic? Imagine a small servo back there that would shift (wirelessly) in place of those cables. (typed w/ the full knowledge that I have no idea how complicated such a mod would be)

And MAN- Do I love that paintjob.
The matching seattube/fork inner/headtube….
WOW!
Thanks Brodie. It’s always nice to have a new dream to fuel the fires.

Also ride a custom as a commuter. Geekhouse Woodville I built during a week long frame building class. Front rack, generator hub powered lights, and yes, fenders. First few years of using it to commute, it stayed inside at home and then inside at work. But it’s become a little less precious and a bit more utilitarian in my mind, so yes, it also gets locked up outside — grocery store, bars, library, post office, and even a day long lockup on the home end of a new bike-bus-bike commute. Of course, it’s also a lot less shiny and pretty than it used to be, but it’s never the flashiest lockup and isn’t the latest, greatest fashion statement kind of bike…

OldDocThedan asks
“Is the F hub a generator? Pretty sure not. But how is that light powered?
What’s the little black gadget inside the fork leg?”

Likely a battery light.
Little black gadget appears to be lined up with the magnet on the front wheel: wireless computer.

On the servo-shifted Rohloff; an interesting idea, but why un-bombproof a bombproof hub? Other than the unsightly cables, of course.

Electronic shifting on a Rohloff, yep, this guys has been doing it for a year or 2 Down Under