There were a few stand outs in the new builder group by concept. Maxwell Cycles featured a motorcycle style-themed ebike on display with a 3D printed “gas can” for artfully concealing batteries and control boxes. But the big stand out (emphasis on the word “big”) was the cargo trike at Pineapple Trikes. This model, the Cargo Cruiser, is philosophically as interesting as it is subversive. “We aren’t just addicted to car infrastructure, we’re now dependent,” Dawn Thomas, half of Pineapple Trikes, began her schpeel. “Why pedal power? Well, we love the planet.” The Social Tandem Cargo Cruiser model we were sitting in, first of its kind but the sixth or seventh pedal powered vehicle from the couple, is designed to be partially a super utilitarian and eco-friendly replacement for your car, partially a conversation starter. The model features two side by side chairs, finished in what looks to be used inner tubes, each with fore-aft adjustability. Braking and steering are both non-hierarchical, meaning that persons in either seat can participate rather than putting one rider in a priority position over the other. The braking system also features a little parking brake, shown in white in this photo. But what’s really fun about the bike is that most of it is from re-purposed materials. A local bike shop allows Pineapple to dumpster dive for parts for each tandem. Many of the components, with the exception of the brakes and rotors, and some of the frame members are actually pulled from discarded bikes. This is just one of the things that make each Pineapple Trike completely unique per customer – drivetrains are dependent on what is available at that time.

Low environmental impact. Practical. Tons of cargo room. The only thing this model was missing was a cup holder. Kevin Ostrom’s eleventh bike, this cafe racer ebike, has been floating around his head for three years. Rather than taking pains to hide that this is an ebike, Kevin sought to celebrate its motor power thematically. The result is clever, and it looks like a lot of fun. The bike is designed around a hub drive motor and the “gas can” was designed to hold the battery and control system, keeping them tucked out of sight. The can itself was 3D printed from Polyjet material with a matte finish and riveted together. It makes sense when you know that one of Kevin’s day jobs is e-bike development for various e-bike companies. 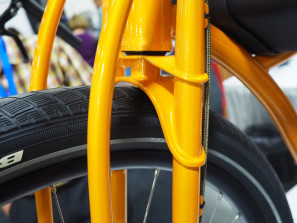 The fork might be the most technically impressive part of the bike. With just enough clearance between the crown and the Schwalbe 2.35in Big Apples it was designed around, the biplane springer fork is a nice touch. Unfortunately, the bike was not completed with motor for the show. Kevin had ridden it, however, and when asked if he was a fan of his bike’s handling sans motor, he said, “Oh yeah.” In addition to the motorcycle-style frame body and the fork, the bike was outfitted with this saddle to really seal the deal thematically. At this time, Maxwell Cycles is a part time endeavor for Kevin.

Thanks Anna! Great coverage, and thanks for the awesome article. It was really nice to meet you, and talk, at the NAHBS!